I found this miniature making book at the car boot sale & the introduction by author, Christaine Berridge, could have been written by me. When I discovered dolls' houses it was as though a locked door had been opened. Here was a hobby that united many of my existing interests and I could be creative with a purpose, indulging my love of social history, architecture, painting, making and sewing along the way.  Six years (or, in my case, six weeks) on from that initial discovery I am as excited by the subject as ever. What I love about dolls' houses and miniatures is that they are so accessible. You can buy or make, or mix and match. This is a passion that is open to all and can comfortably span the generations and my head is full of ideas that I only wish I had the time to develop. 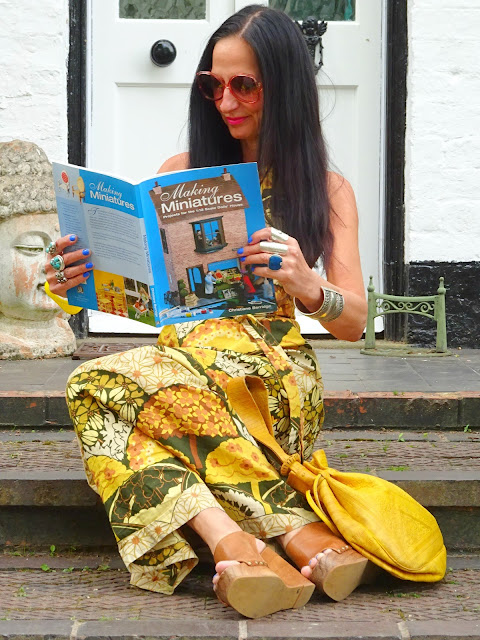 The glorious weather of the past couple of weeks has hindered my dolls' house progress as I've spent most of my free time outside but, with a few hours put aside in the evenings for play, I've finally completed the first room in my latest Lundby, which I'm calling the salon. It's a light and airy space filled with houseplants where one can enjoy civilised conversation, a cool drink and maybe play a tune or two on the grand piano (inherited from a wealthy aunt).

I wanted a real wood floor for this room, just like in our real-life house. The boards came in kit form from eBay for £1.99 and Jon fitted them for me. I didn't ask, he volunteered, probably anticipating the mess I'd get into, but I did manage to fit some skirting boards without too much swearing. 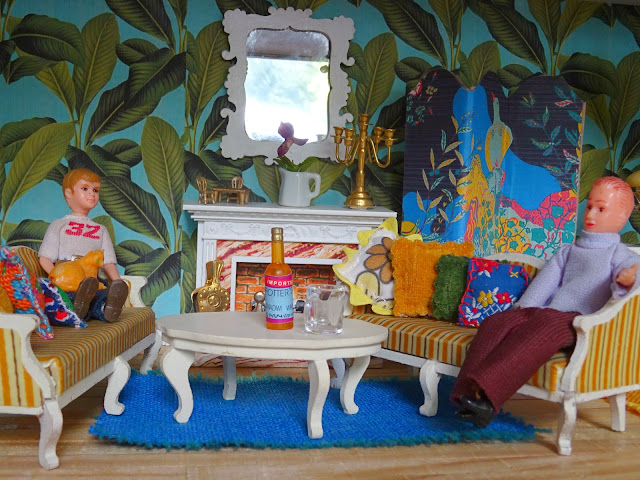 I'd been in love with the Martinique wallpaper forever, designed by Don Loper in 1942 for the Beverley Hills Hotel (HERE) and thought this print with the aqua background (in real life, a fabric design) would be a great alternative. I decided to leave the window curtain-less as the room wasn't overlooked by the neighbours and the leaded glass deserves to be seen.

In sharp contrast to Lundby's more usual modernist style of furniture, the Royal lounge suite in the Neo-Gustavian style, common in Sweden at the beginning of the 20th Century, was produced in 1978. When new, the Royal came with a miniature gold framed portrait of the official engagement photograph of King Carl XVI and Miss Silvia Sommerlath and was taken by Lennart Nilsson in 1975. 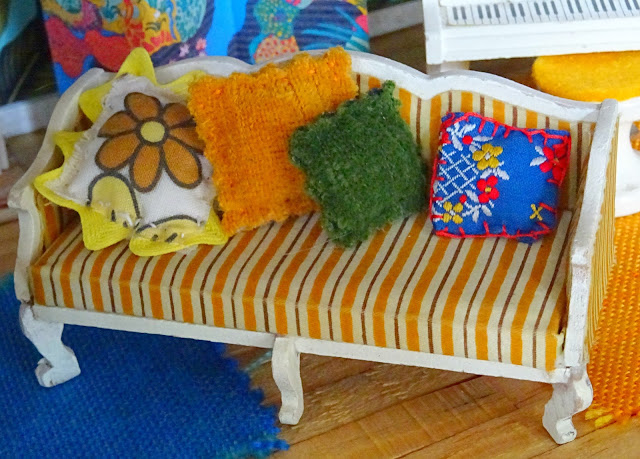 The suite originally consisted of a sofa, a coffee table and two armchairs. The set I won on an eBay auction had a single chair and a pair of sofas, one of which had been fitted with a replacement leg, but at a mere £7.50 (the joys of listings finishing on gloriously sunny Bank Holiday weekends!) I was more than happy. My friend Lisa made the groovy yellow floral cushion and the rest were made by me in the garden yesterday. 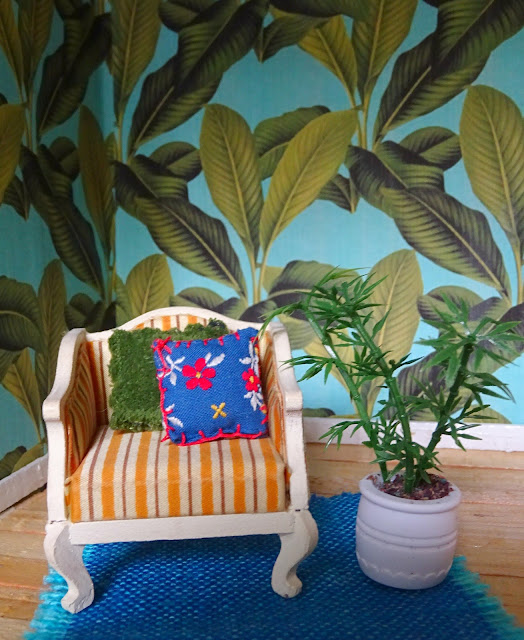 Mini cushion making is very addictive! The blue fabric is vintage braid, cut into lengths, stuffed with cotton wool and blanket stitched along the edges with embroidery silk (the joys of buying vintage sewing boxes, I've got endless notions to use up). 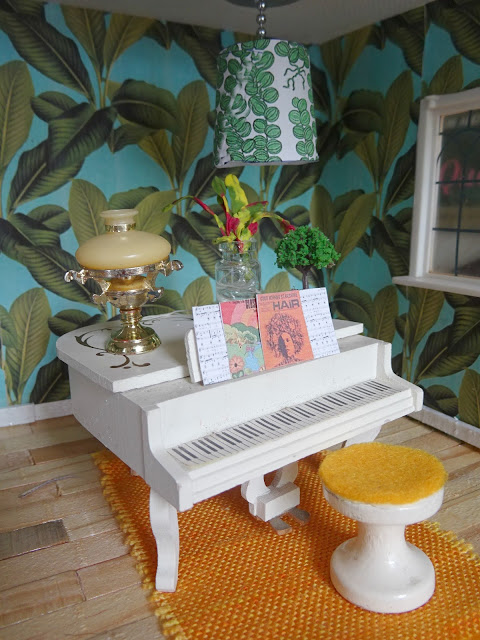 This gilt decorated grand piano, in the Rococo style, was manufactured by Per-Hugo Bornfelt for Lundby between 1950 - 1970. The stool is a later piece from the 1970s as is the brass lamp. 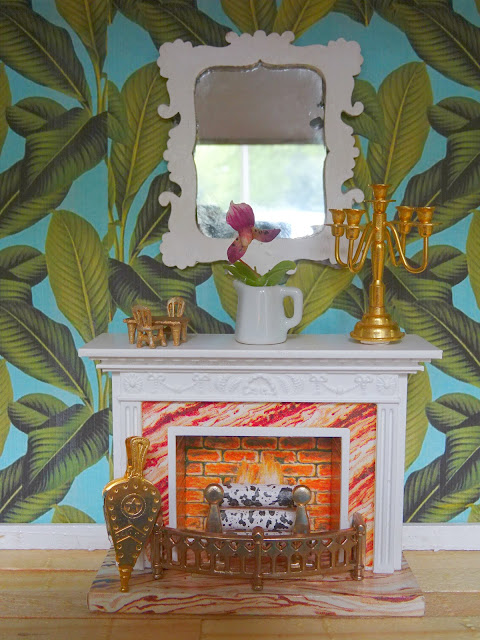 Remember me showing you the haul of dolls' house accessories found at the car boot sale a couple of weeks ago? At 3 items for £1 I don't really know why I didn't buy the lot. The bellows, candelabra and miniature brass table and chairs were just some of my buys. The orchid in a jug came from a lady who makes mini pot plants and sells them on eBay so cheaply it's hardly worth attempting to make them myself. The wooden frame came from a set bought from Poundland and the mirror was prised out of an old eye shadow kit. 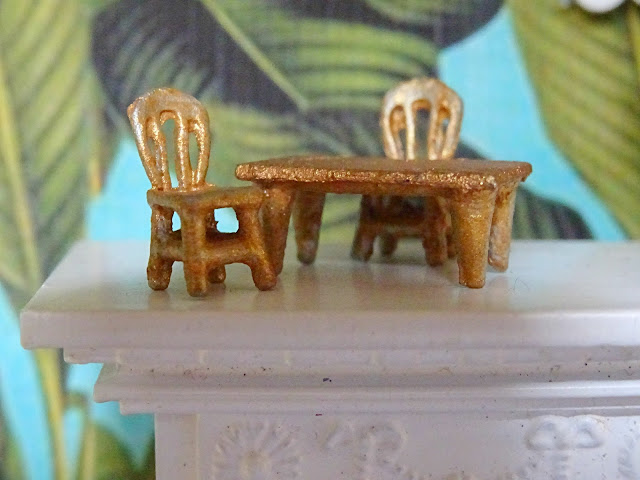 A mini within a mini! 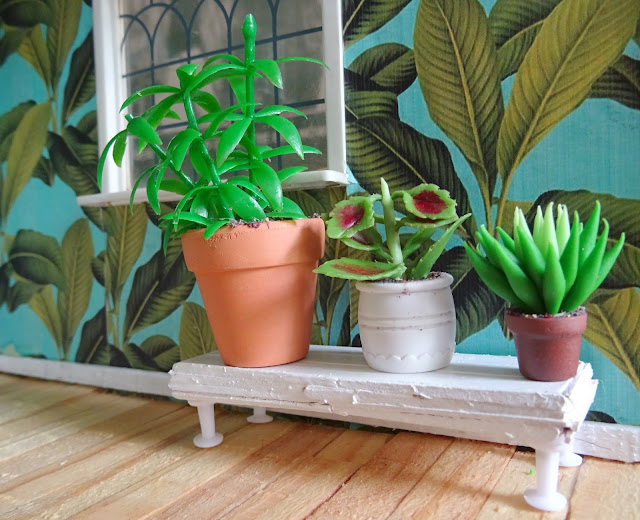 I made the plant bench from lollipop sticks, push pins, toothpicks and a gallon of glue. 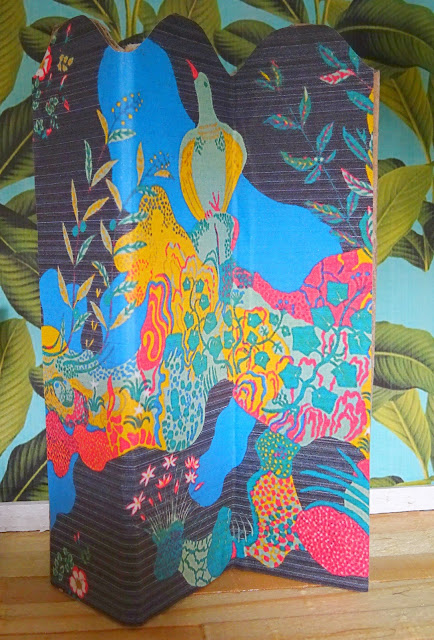 Are you familiar with Josef Frank (1885 - 1967)? He was an Austrian-born architect, designer and artist who founded the Vienna School of Architecture. He fled the burgeoning Nazism of Austria in the late 1930s to settle in Sweden and had an enormous impact on the history of Swedish design. I adore his vibrant textiles and wanted to include some in my house. The screen, which I made from a cat food box, is adorned with his Anakreon design, produced in 1938 and based on a 3,500 year old fresco from the Palace of Knossos on Crete. 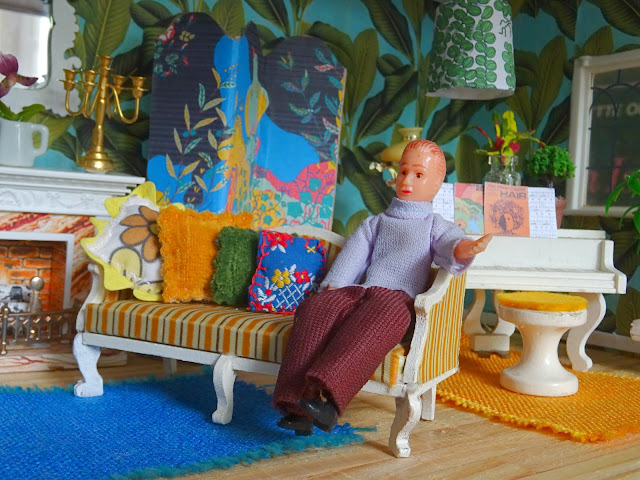 The print of the lampshade above Papa Lundby's head is another Josef Frank design, Celotocaulis. Produced in 1930 it comes from an Asian flower species characterised by a plume-like flower (caulis is Latin for flower stalk). 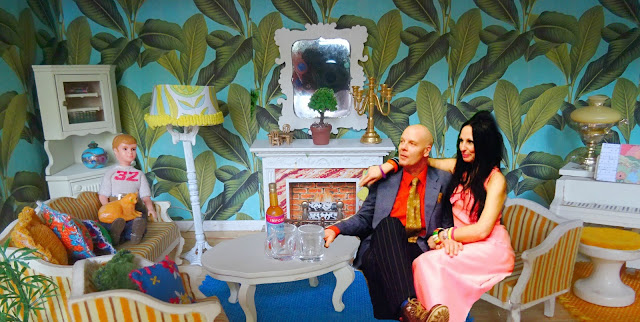 Our Swedish neighbours, The Lundbys, asked us to babysit their son, Sven, last night along with their rescue cat, Viggo. It was a late night as Sven insisted on staying up to watch the ice hockey quarter finals between Sweden and Latvia (Sweden won). 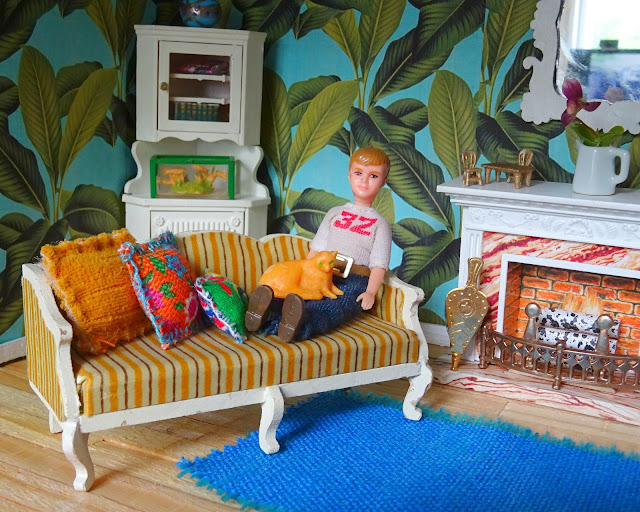 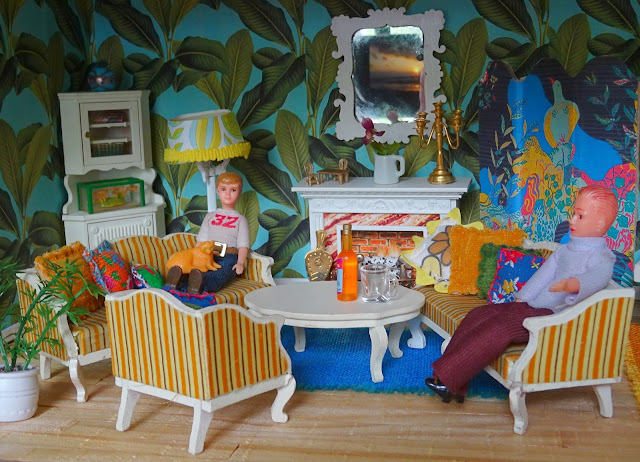 Papa Lundby needs a beer, he and his wife have been trying to find some new clothes for the summer but they can't see anything in the shops, it's either badly made, poorly fitting or in boring colours. Being the neighbourly sort I've offered to run them up something groovy if I find some cool fabric when I'm at the car boot sale over the weekend.