Indian Epic - Travels In Kutch, Gujarat - The Temples, Ruins & Tombs Of The West 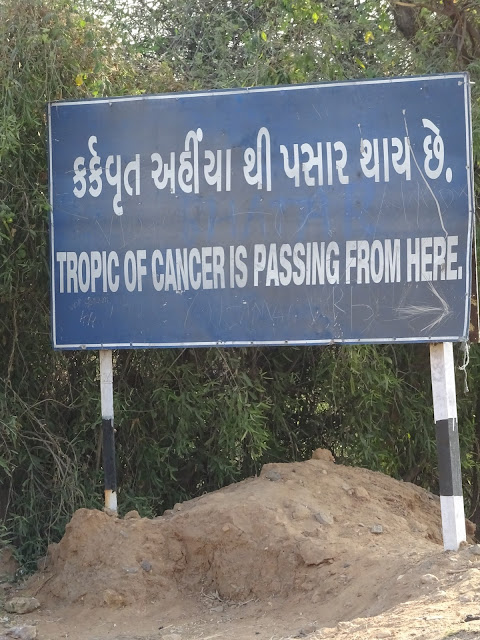 Just after 8am & accompanied by fellow Devpur house guest Susan, a German-born architect living in Zurich, we set off to explore western Kutch. On the way we passed through the Tropic of Cancer. I remember my dad, a keen sailor, explaining the various rituals involved in crossing the line but, in the absence of any of the correct props, a photo had to suffice. 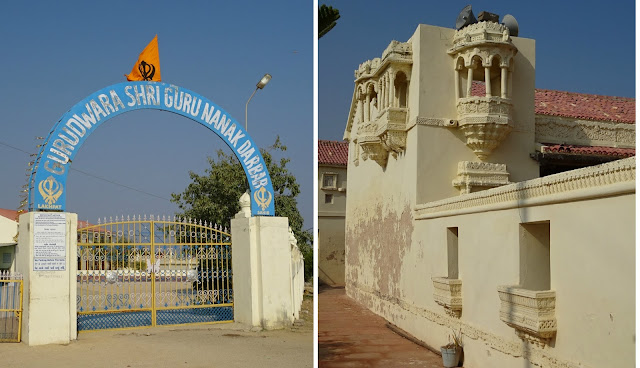 Our first stop of the day was the Lakhpat Gurudwara where Guru Nanak (1469- 1539), founder of the Sikh faith, stayed in a house on the site on his way to and from Mecca. The Udas sect of Sikhism was established here in the 16th Century by Guru Nanak's son, Shrichand. There's been a Guru Nanak temple in Walsall since 1962 - longer than we've both been alive - so it was a real privilege to visit the place the great man had visited. 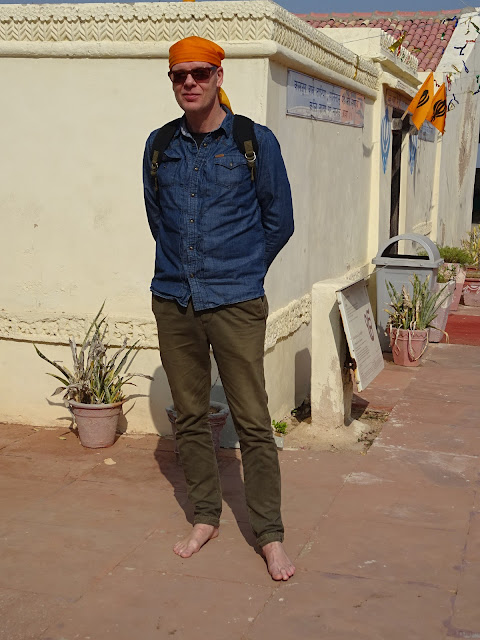 Wearing our obligatory orange headscarves we were welcomed in and invited to take prasad* in the form of karah, a halva type sweet made from semolina.

*A devotional food offering made to a god, later shared among devotees.

Not far from the Gurudwara were the remains of the once important merchant town of Lakhpat. Following an earthquake in the 19th century, the water supply dried up and the residents were forced to abandon their homes. All that's now left of Lakhpat are the crumbling city walls and weed strewn ruins. 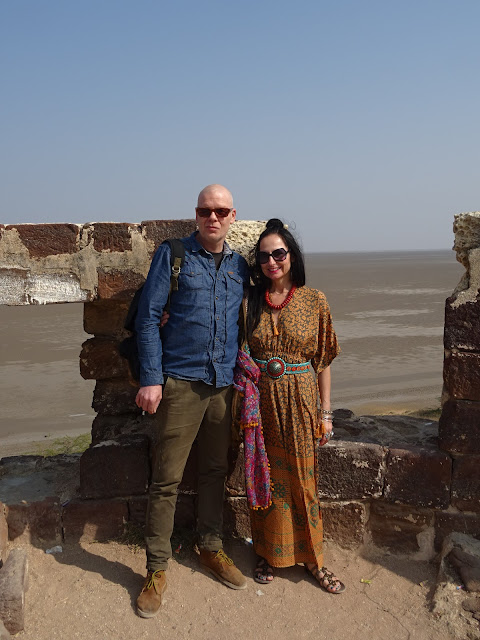 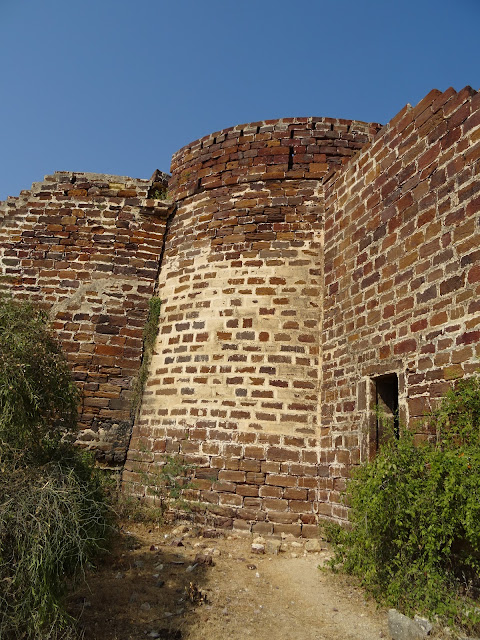 Within the crumbling city walls stood the tomb of Sufi saint, Ghosh Mohammed Kuba, who lived in Lakhpat in the early 19th century. Revered by Hindus and Muslims alike, he was both a renowned healer and a celebrated songwriter. After his death in 1855 his brother commissioned a tomb to be built using traditional flower motifs and inscriptions taken from passages from the Koran carved by Kutchi artisans using the local blackstone. 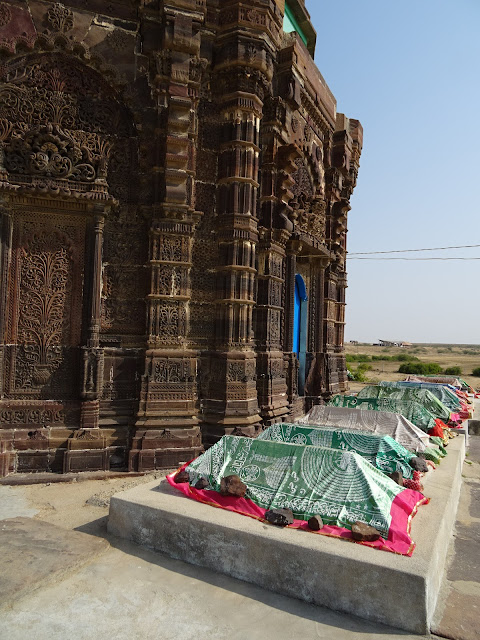 At first glance we though these were coffins but were assured that they weren't and it was fine to take photos. 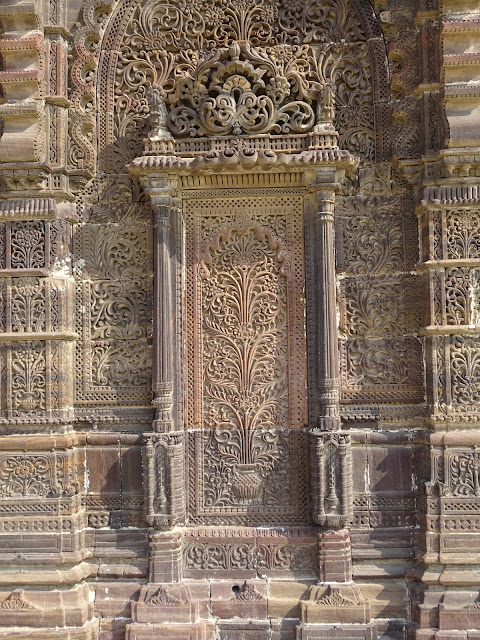 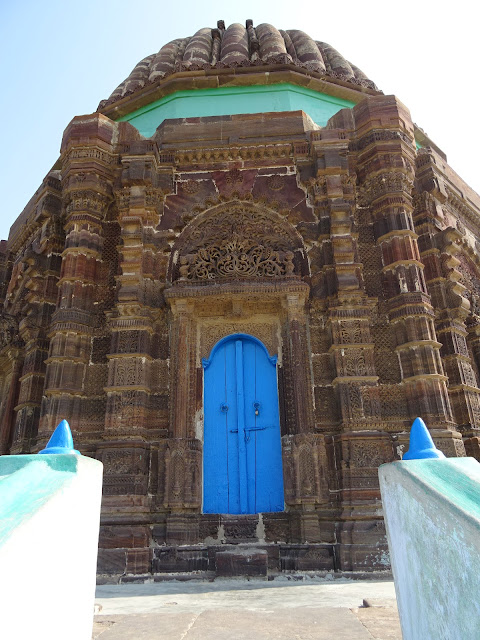 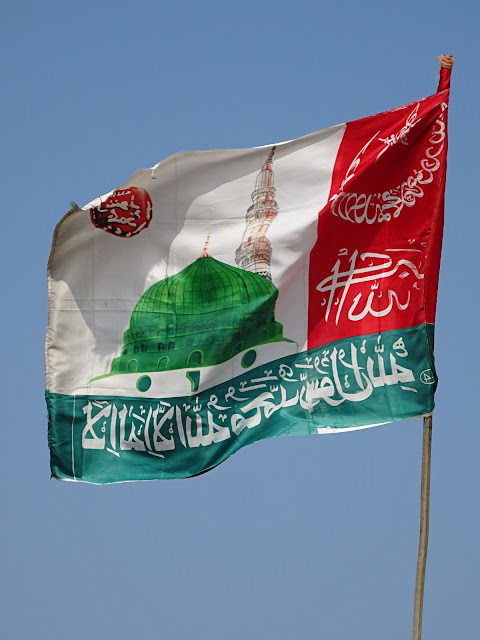 These ladies were employed as road labourers. They were happy to pose for photos, no doubt a welcome diversion from their backbreaking work. 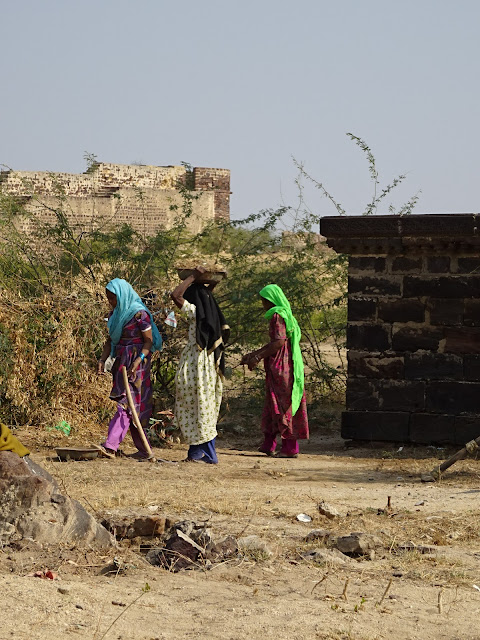 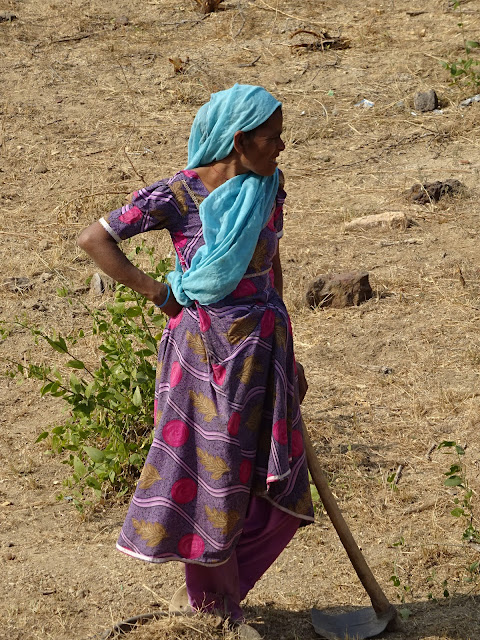 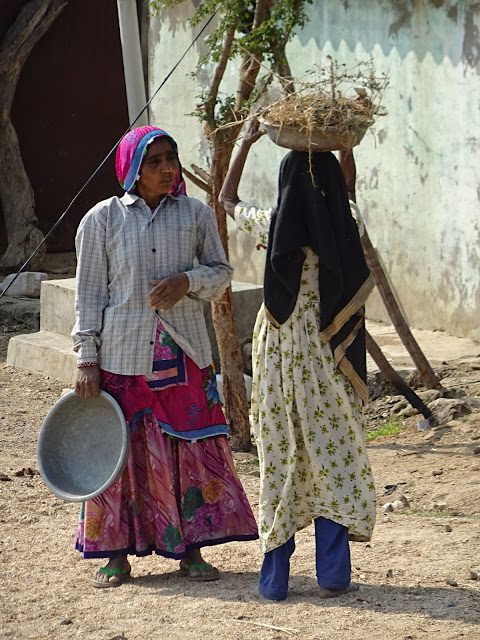 A short walk away from Ghosh Mohammed Kuba's resting place was the tomb of Kasim. According to legend Kasim was said to have taken and destroyed the nearby city of Kanoj, killing the chief and sending as a prize to his sovereign the king of Ghanzi, two of the vanquished leader's daughters. At Ghazni they were treated with every kindness, but refused to be comforted, saying, that while they were under his charge, Kasim had violated them. Enraged at the story the king, without enquiry, ordered Kasim to be put to death and his head sent to Ghazni. When it was shown them his accusers rejoiced that they had avenged their father's death, and confessed that Kasim had done them no harm. On account of his undeserved punishment Kasim became a saint. 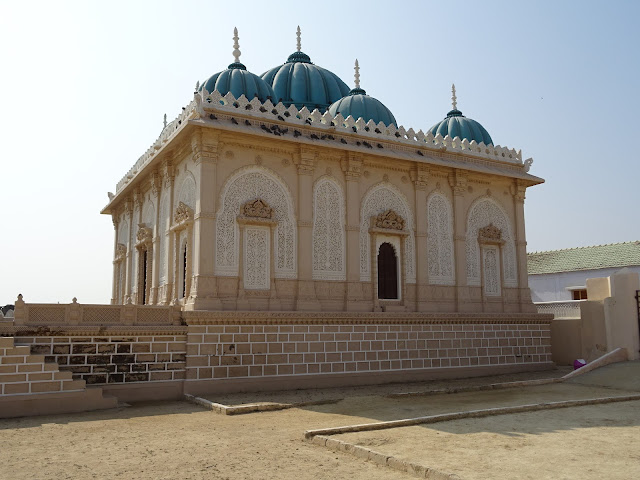 Kasim's tomb had recently been repainted. Usually it's only open on a couple of occasions every year but luckily for us the caretaker was passing by and invited us in to take a look. 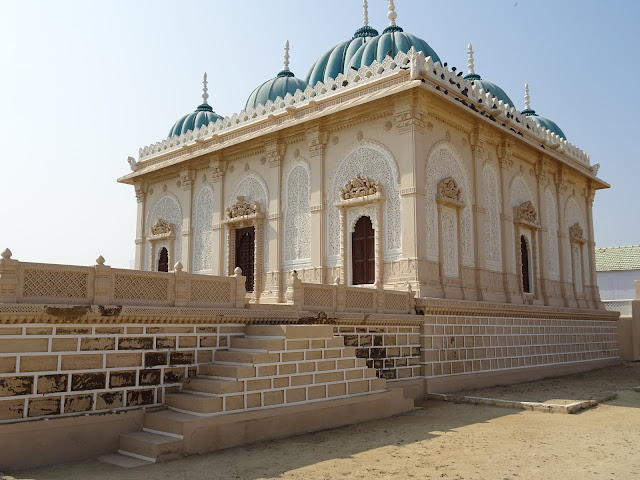 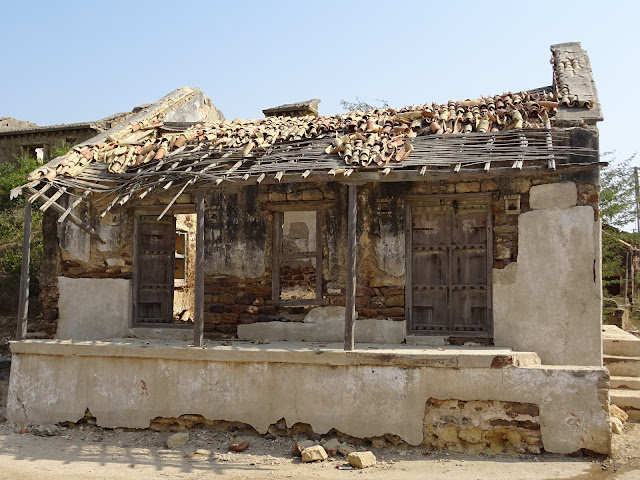 This was the Lakhpat customs house, built in 1850. Here traders would pay duty on goods before they were moved further afield by caravan. The windows were especially designed with wide sills to enable the camels to feed easily - an old fashioned filling station. 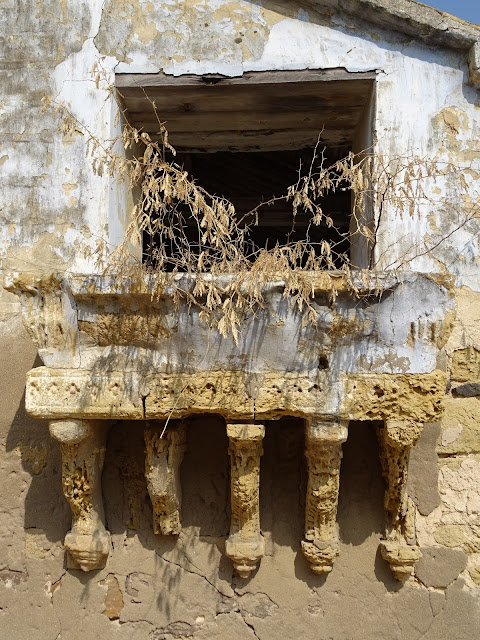 A short drive away from the silence of the tombs and the desolation of the once great Lakhpur and ....boom! Coachloads of pilgrims, rickshaws, the deafening horn okay please, herds of itinerant cattle & scruffy pi dogs and vendors plying their trades and selfie mad youngsters, we were back once again in the general chaos of urban India. 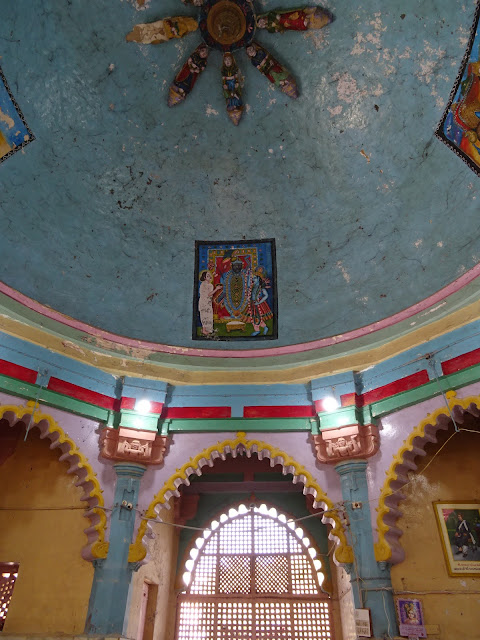 This was this wonderfully colourful temple at Narayan Sarovar. The beauty of the vivid interior along with the vibrancy of the clothes worn by the pilgrims made us ponder on whether the parched environment led to the Kutchis embracing colour - a bit like I do back home in the grey UK. 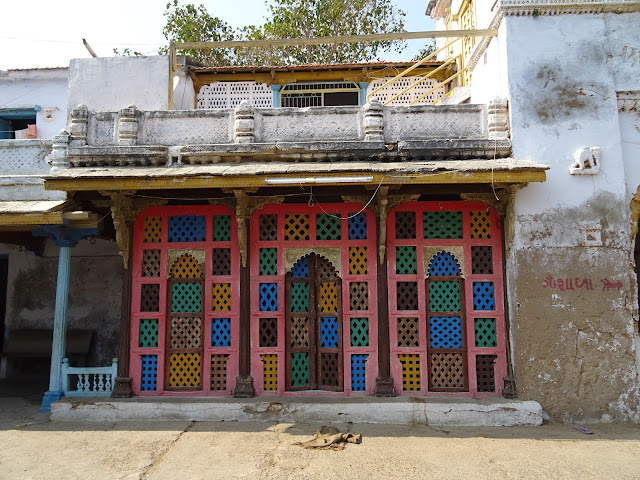 Once again we were welcomed into the temple where we managed a few photos before being mobbed. 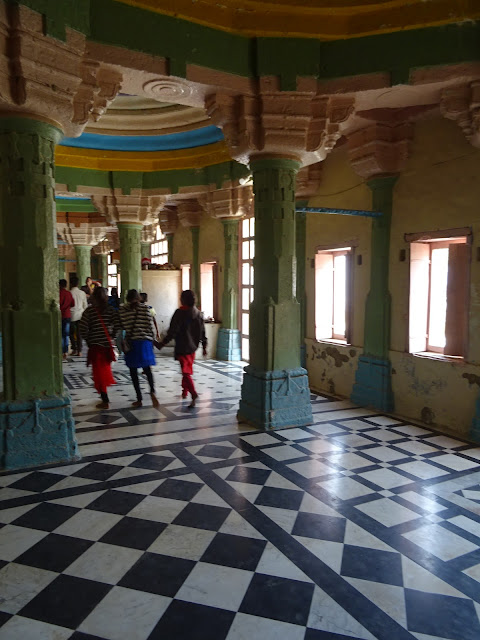 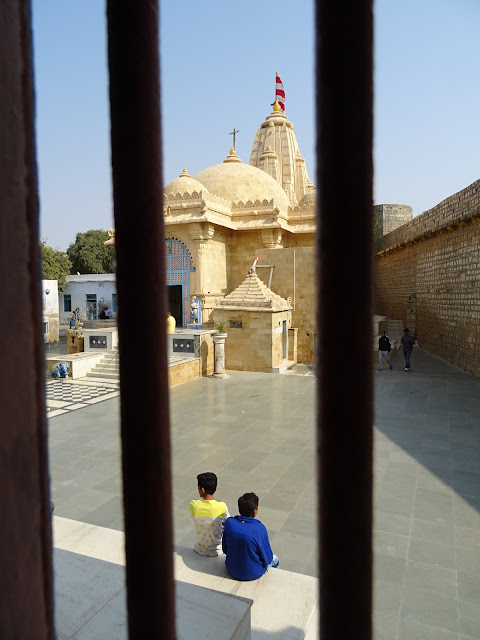 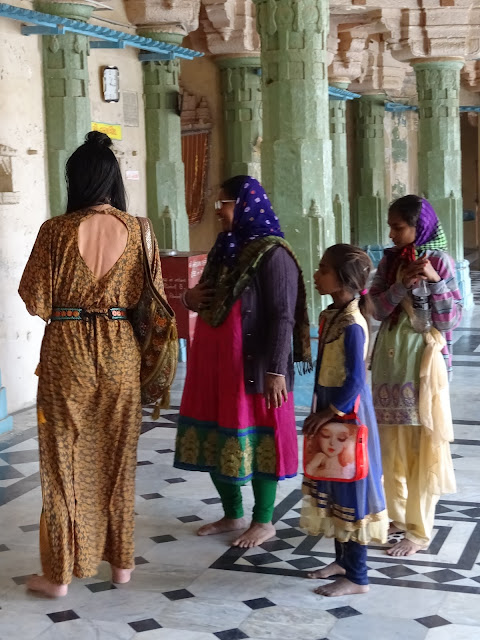 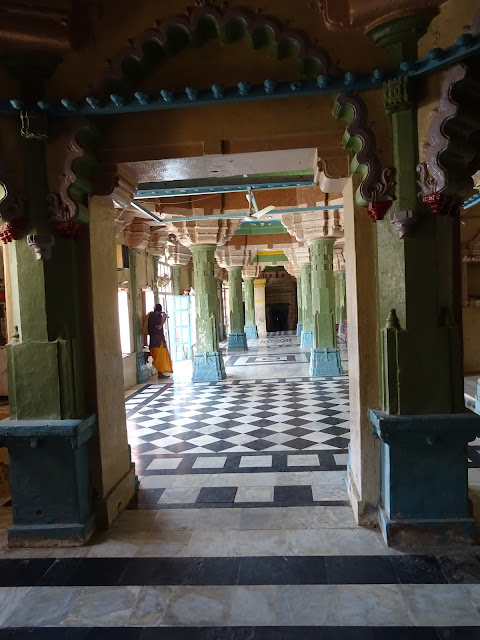 Lunch was magical, served in a gurudwara canteen run by volunteers. A delicious veg thali eaten with our hands on long metal tables with hundreds of hungry pilgrims more interested in taking photos of us than enjoying their lunch. It's tricky enough eating dhal with your fingers let alone posing for a selfie at the same time! The lunch was a donation of whatever people could afford. We paid the same as we'd paid for lunch yesterday. 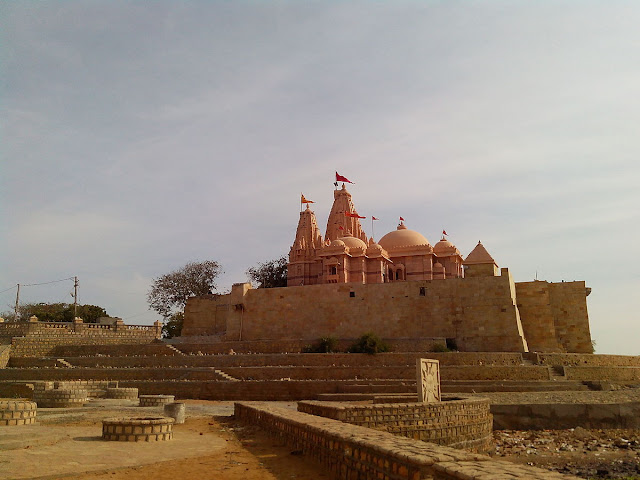 Lunch was followed by a fresh coconut bought from a roadside wallah and then a wander around Koteshwar, a temple dedicated to Shiva. On a clear night it's possible to see the lights of Karachi in Pakistan twinkling in the distance. 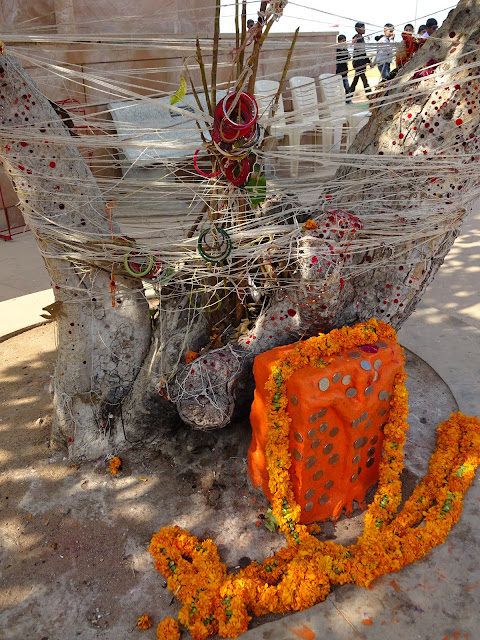 We posed for yet more photos - Jon being the centre of attention with the hip young guys.
Uncle, uncle, one selfie please! 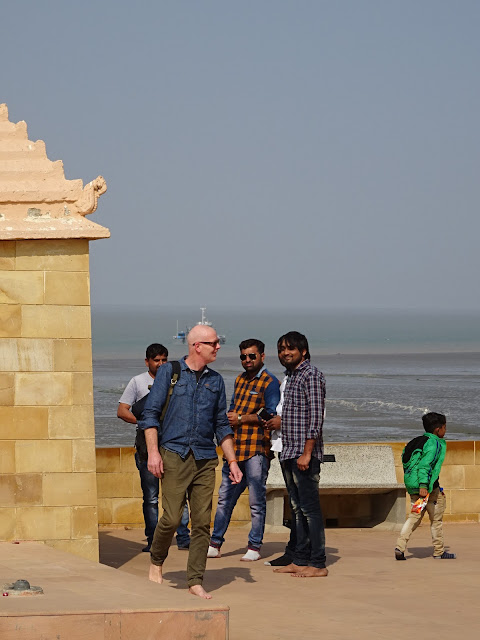 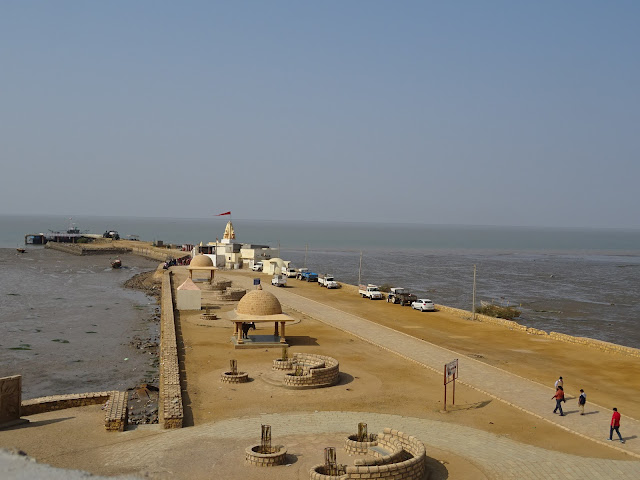 Pah! Who needs booze and bars when there's this much action? There were just three of us for dinner back at the Devpur Homestay that night so K cracked open his stash of artisan chocolate he'd bought from a posh chocolatier in Kemp's Corner in downtown Mumbai last month and we shared some with his mum and his daughter, Badmini.

Another chota peg and another early night, the three of us were exploring the north tomorrow.

All of our photos of western Kutch can be seen HERE.