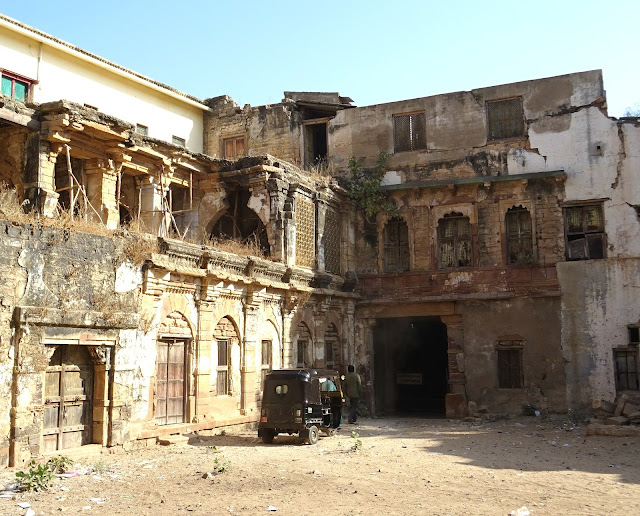 Ready for more? On Monday morning, after a sociable breakfast spent chatting to K and the other guests, driver Ramji picked us up and dropped us off at the medieval walled town of Bhuj. 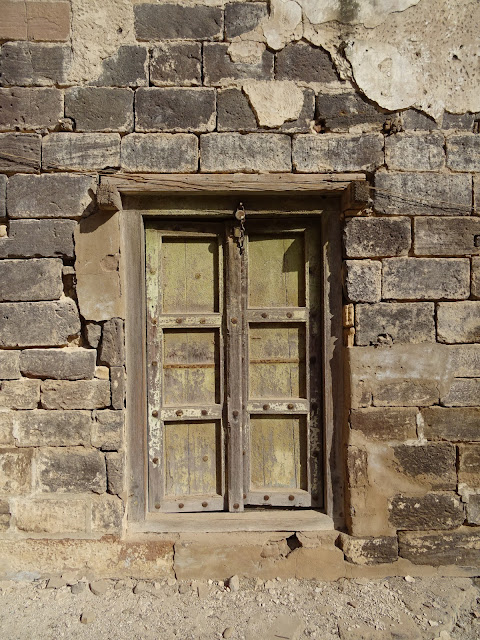 Like the rest of the Kutch region, Bhuj was devastated by the 2001 earthquake. 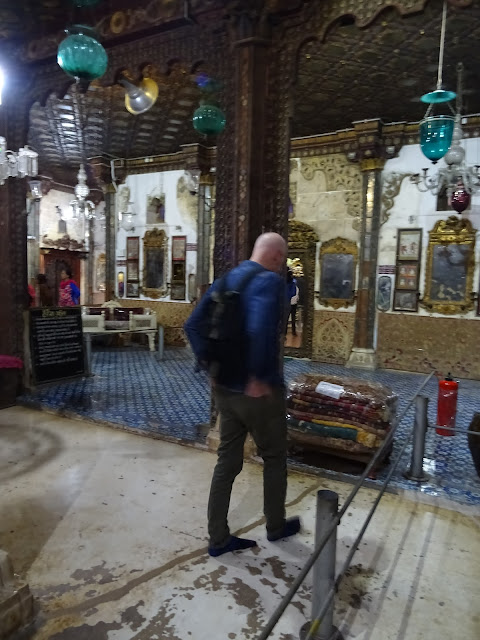 The first point of interest  was the Aina Mahal, an eighteenth-century palace built in the reign of Maharajah Lakho and later turned into a museum to showcase the opulence of the royal dynasty. Despite the roof collapsing after the earthquake, the famed Hall of Mirrors remained miraculously intact. The chief architect of the palace, Ram Singh Malam, was an Indian seafarer who studied in Europe for seventeen years after being rescued from a shipwreck by Dutch sailors off the coast of Africa. His masterpiece was a tiled pleasure chamber in the heart of the palace where the maharajah, soothed by an ingenious system of fountains, used to compose poetry and listen to music. 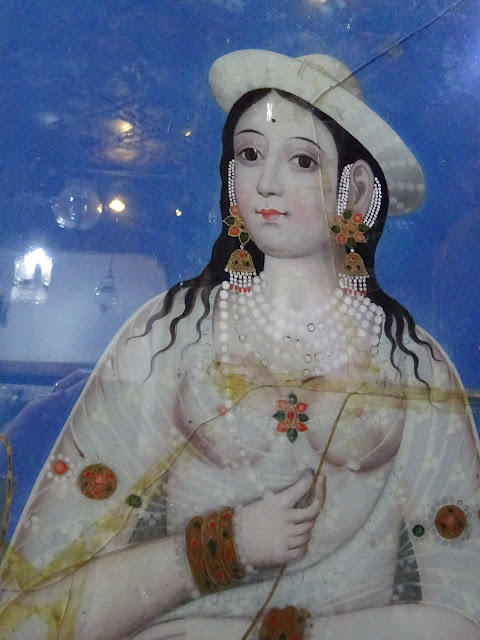 I adored the shabby glamour and faded decadence far more than the pristine stately homes we have in the UK. 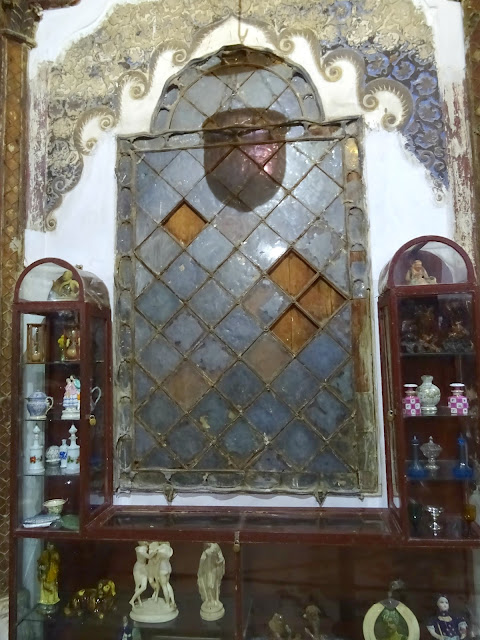 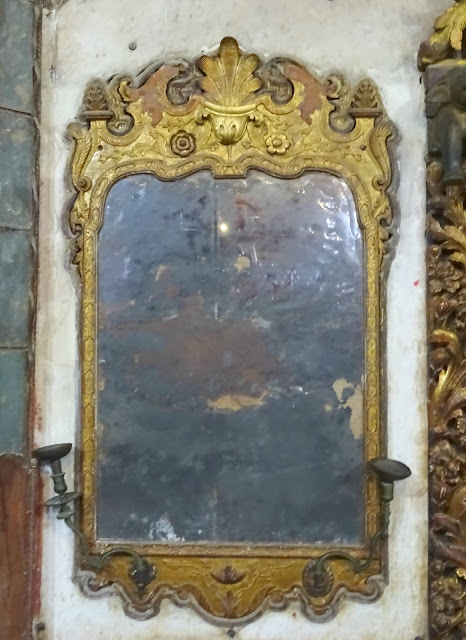 Aina Mahal, like most Indian museums and monuments, has a two-tier admission fee with foreigners paying a higher rate (in this case 50 rupees as opposed to 10 rupees), a government initiative since Independence to encourage Indians to explore their country. 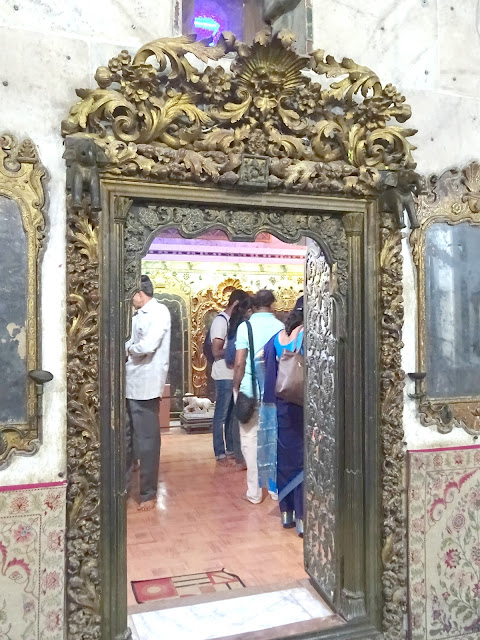 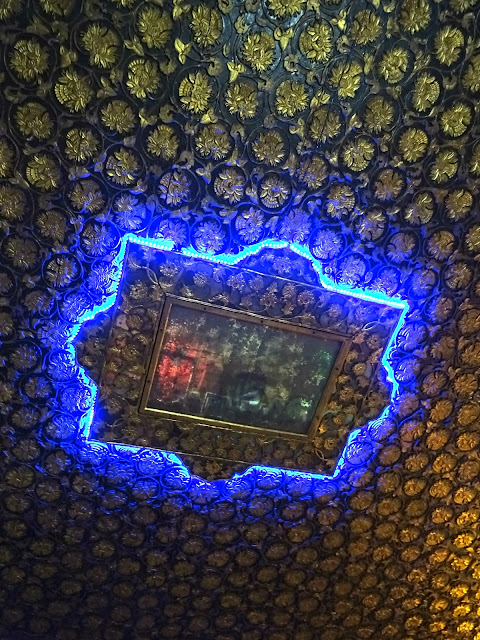 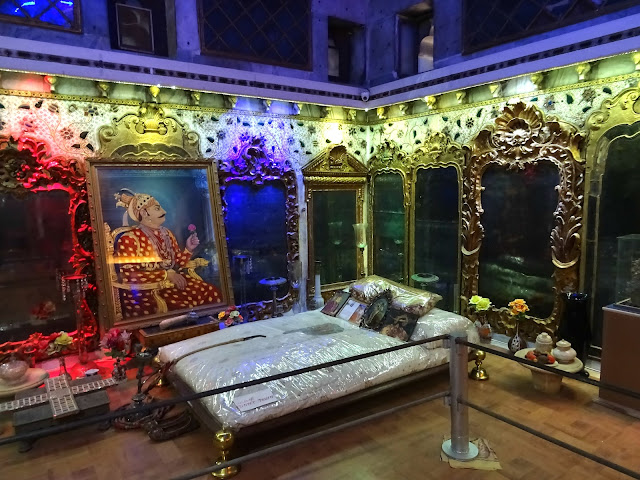 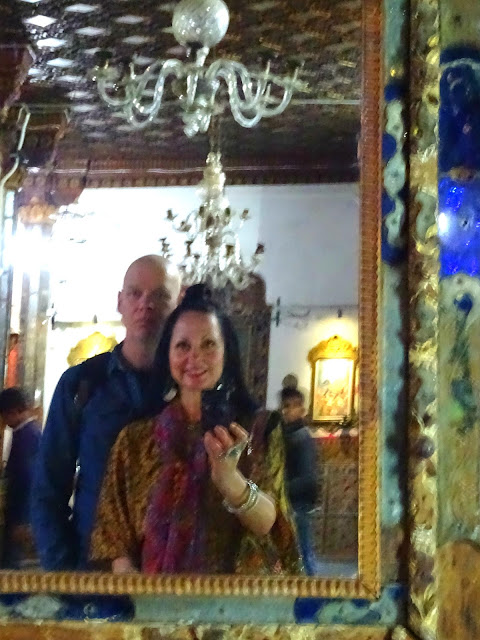 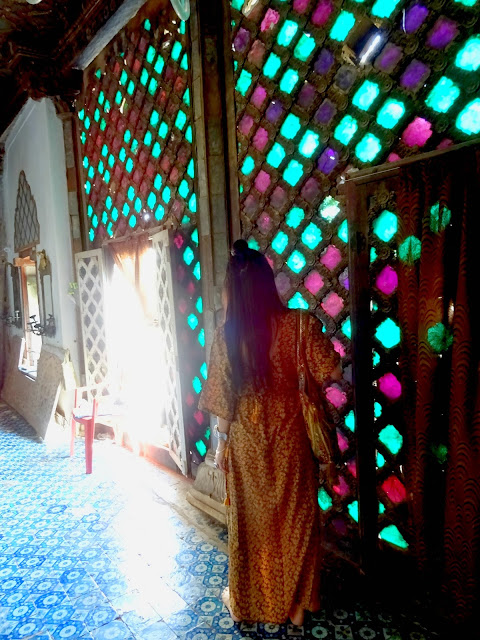 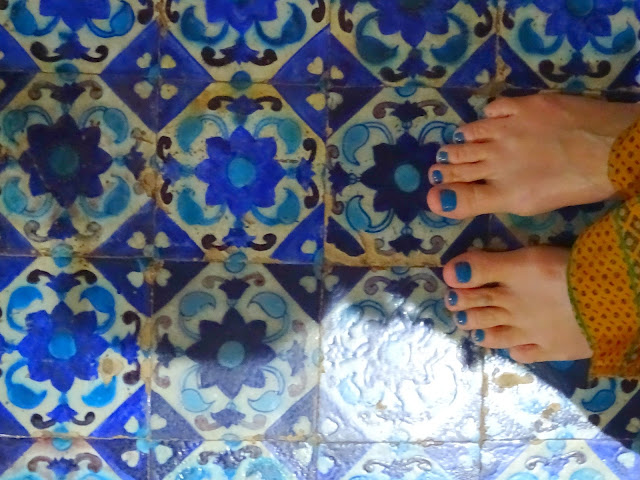 Although we were aware that Kutch is rarely visited by foreigners, we weren't quite prepared for the reception we got. On the journey the occupants of trucks, carts, buses and rickshaws would slow down, point and wave and , as soon as we stepped from the car, we were surrounded by crowds & crowds of people, greeting us with a Namaste and yelling Selfie, Selfie. Everything we did, from taking off our shoes to enter temples, looking at exhibits in museums and palaces, queuing for the loo and eating lunch was captured on a smart phone. Even the most respectable looking people, from bespectacled sari-clad schoolteachers to businessmen in pale cotton bush suits with rows of pens in their breast pockets would, on asking for a selfie, pull some dark sunglasses out, drop to their knees and strike up a gangster pose. 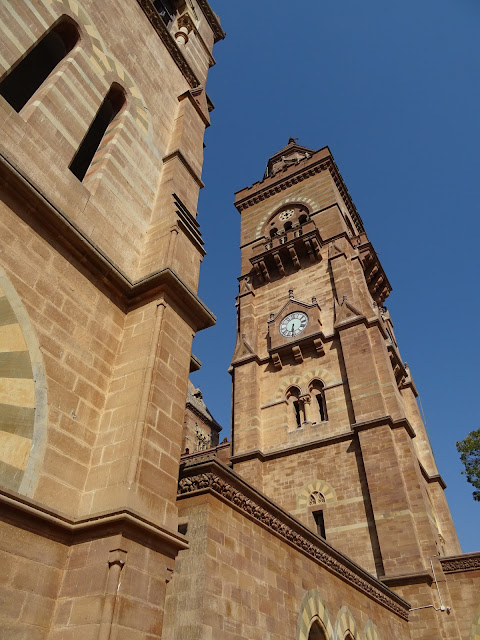 Next stop was the Prag Mahal, built in the 1860s and combining Mughal, British, Kutchi and Italian architectural styles. It also suffered damage during the quake with the main tower held precariously in place with skewed stones (as you can see in the picture below.) 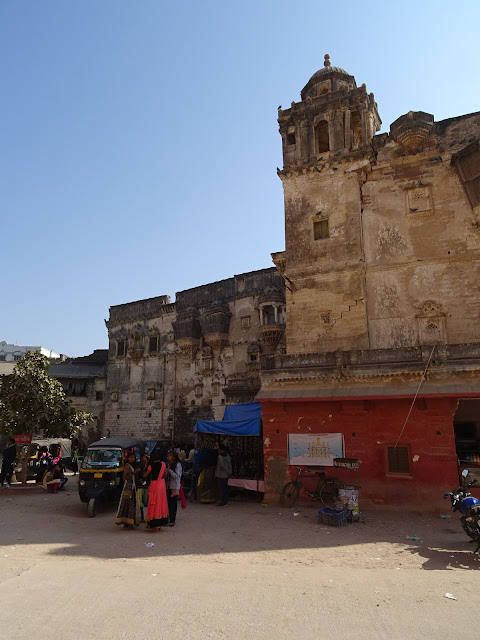 The main hall was used as a location in the wonderful Bollywood/British epic Lagaan - one of only a handful of Indian films ever to have been nominated for an Academy Award. 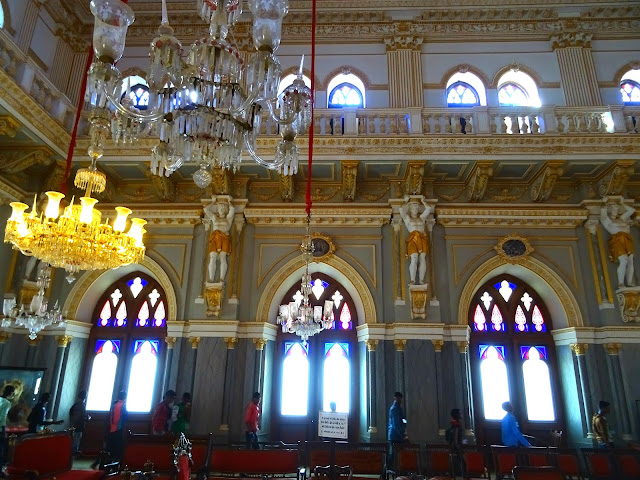 Afterwards we visited the colourful Sharad Bagh Palace, a compact retreat built for the last maharajah in 1867. 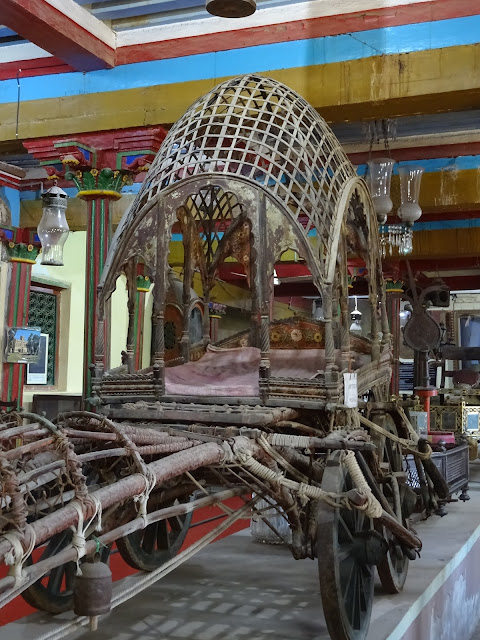 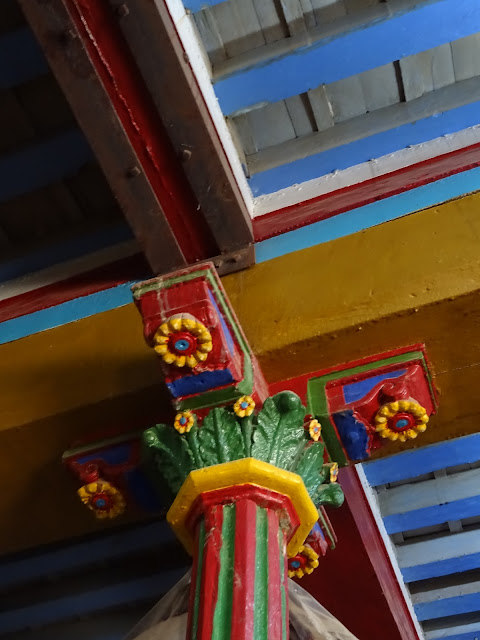 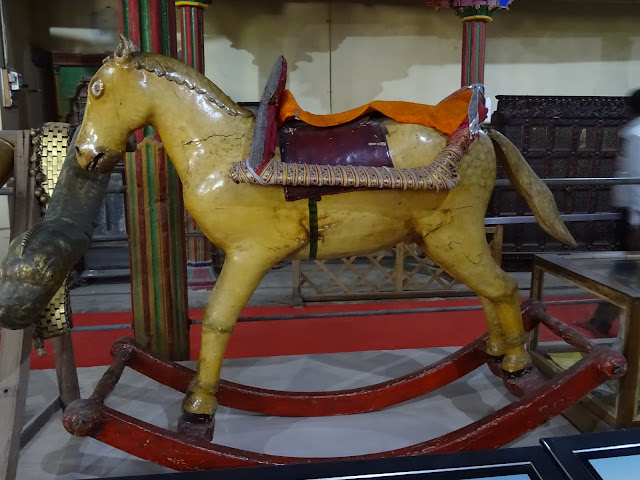 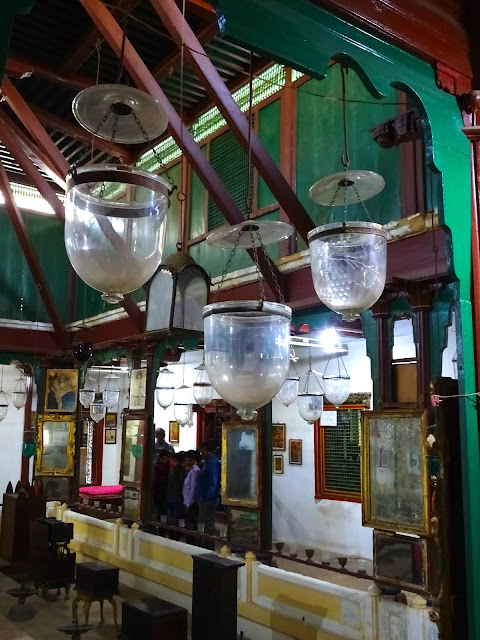 The Room of 17 Pillars at Devpur had the very same antique Belgian etched glass chandeliers. Talk about living like royalty! 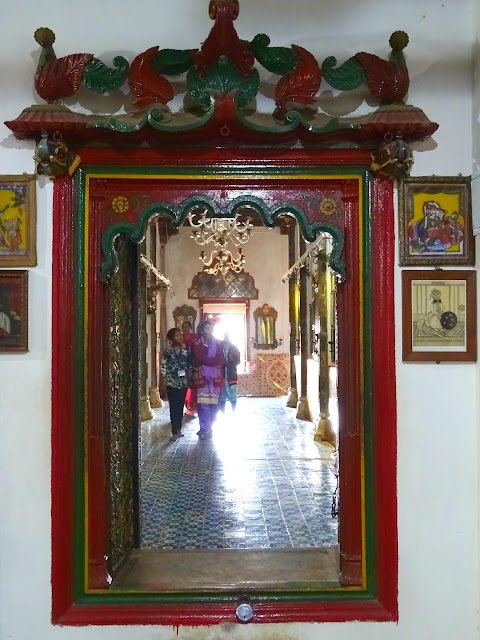 Next we called into The Kutch Museum which was bursting at the seams with the most spectacular locally produced antique textiles, jewellery and artifacts along with some rather scary life-sized mannequins representing the major Kutchi communities. We caused so much chaos with children on a school trip that the guard had to step in and tell them to behave themselves.

Some of these textiles & jewellery are over two centuries old.

Afterwards Ramji bhai took us to the modern Shree Swaminarayan Temple, which was like stepping into a heavily iced wedding cake. In many parts of India foreigners are forbidden from entering temples due to insensitive behaviour but, as hardly any westerners visit Kutch, nobody has done anything offensive...yet. 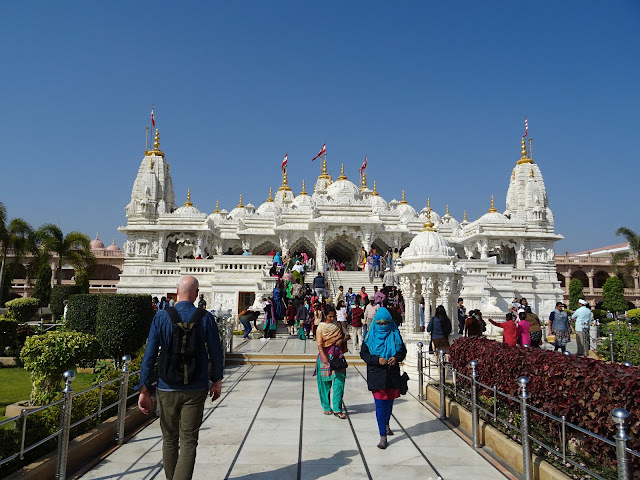 K had suggested a couple of options for lunch, either the swanky air conditioned dining room in the Prince, Bhuj's poshest hotel or a bustling roadside canteen next door to the organic juice factory. You don't really need to ask which one we chose, do you? 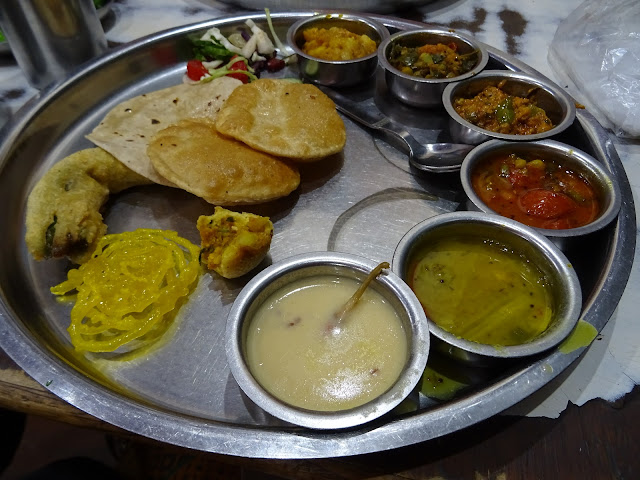 In canteens all over India you won't find a menu instead, from 11am until 4pm daily, you'll see a Meals Ready sign outside which mean that thalis are served there. Pull up a chair and someone will put a tin try with a number of bowls in front of you, numerous waiter will stop by your table and fill your plate high with vegetable curries, chutneys and pickles. To that they'll add poppadums, a couple of rotis, a fried snack, a mug of buttermilk (said to aid digestion) and a sweet (in Gujarat you get rice towards the end of your meal). The waiter will keep returning to top up your tray until you tell him to stop. The cost for this endless feast? 100 rupees (around £1.10) 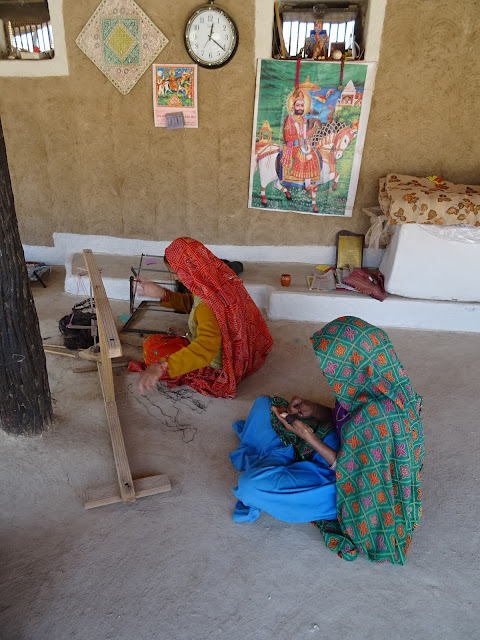 After lunch we visited a traditional weaving village where we were given a demonstration of spinning and weaving. The wool comes from the desan breed, an indigenous sheep from Kutch. (Apologies for my dreadful Black Country twang spoiling this video!)

Our final stop of the day was a visit to Kala, a newly opened exhibition of "old world" organic cotton, showcasing both the manufacturing process and the finished product. Kala cotton is indigenous cotton grown in Gujarat, it's said to be one of the most water efficient cottons in the world, is drought tolerant (perfect for a desert state like Gujarat) and requires no pesticides or chemical fertilisers.

The clothes on display, created by both Indian & European designers, were incredible, the denim was so luxurious, nothing like the mass produced stuff you'll find on the high street. 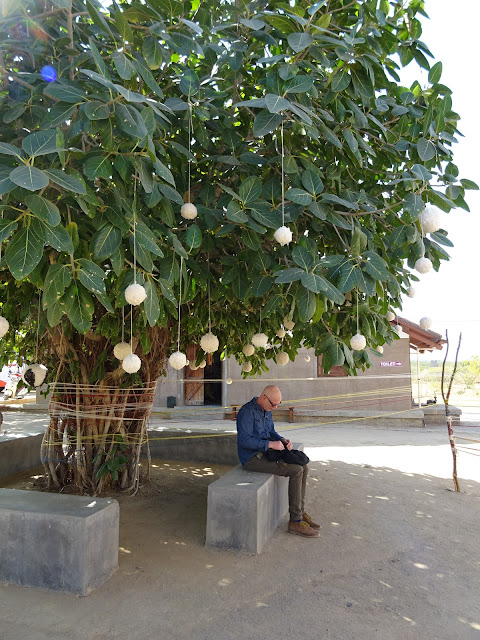 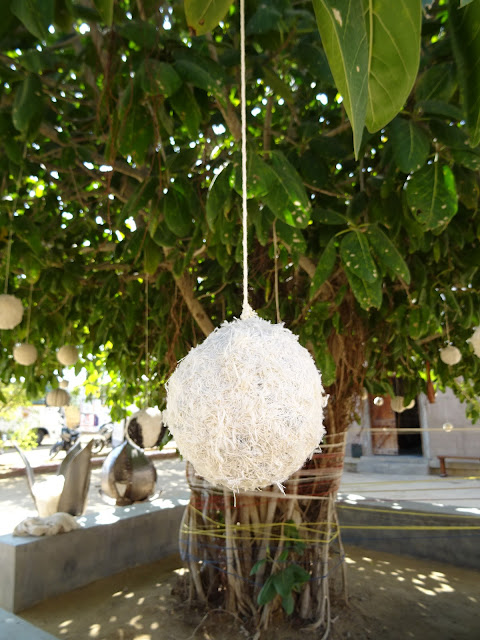 While we were there I couldn't resist posing next to this glorious looking woman from the Meghwal tribe. She's wearing a traditional costume adorned with pakko embroidery and a dowry necklace to die for.  Linking to Patti & the gang for Visible Monday. 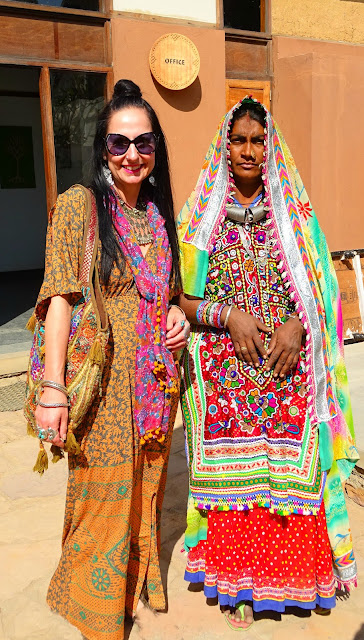 And that was just one day! After the hour-long drive back to Devpur, showers, a swift chota peg* and a delicious Gujarati vegetarian dinner we were in bed by 9.30. Another adventure awaited us and we needed our beauty sleep for another thousand selfies tomorrow.

*Hindi for a small alcoholic drink