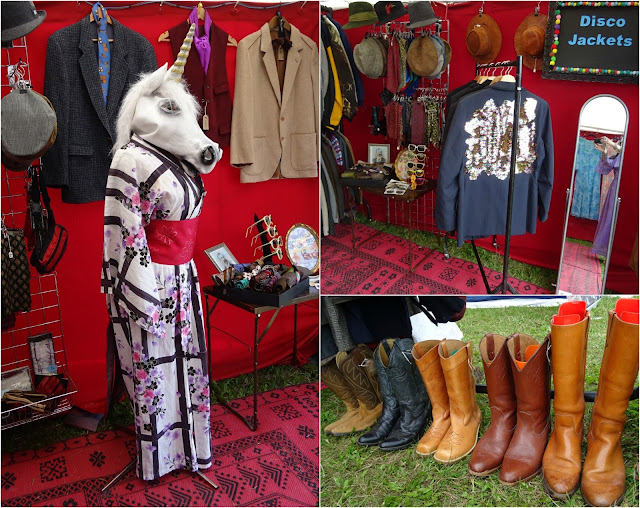 As is always the way, by the time we finally get the hang of our stall set-up it's almost the end of the festival season. Those red drapes we made last week don't look half bad, do they? 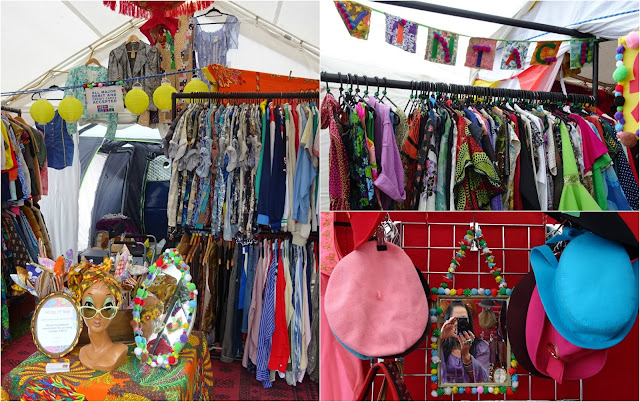 This was how our pitch looked seven and a half hours after arriving at the Towersey Festival site last Wednesday. After a can of gin and tonic by 10pm we were fit for bed. With the festival due to open to the public at midday and the festivities scheduled to continue through until Monday night it would be the longest running festival we'd ever done. We needed to pace ourselves. 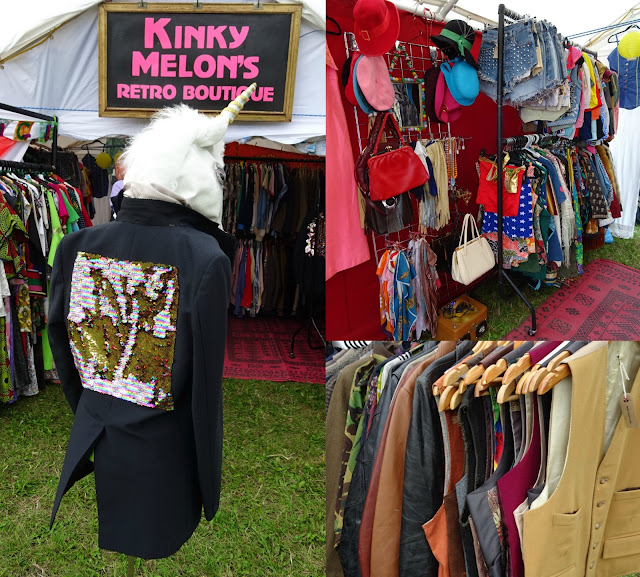 Thursday's weather was as drab and overcast as it had been for pretty much most of the entire month. As is often the case on the first day of a festival, the general public weren't in any rush to shop and the few that ventured into our stall seemed a bit bemused by it all. By the time we'd closed takings were still in double figures. Was bringing our vintage clothing to a folk lovin' crowd going to be a disaster?

When the alarm went off on Friday morning we were met with heat & blazing sun and, on venturing over to the portaloos, discovered that the general public were already up and about despite it being just after 8am. After a quick wet wipe wash and a breakfast of fruit and yogurt we pulled on our finery, rolled up the tent flaps, dragged the rails outside and plonked our deck chairs in the sunshine.

That's not going to be real vintage, we overheard a passer-by telling her husband, so I invited her in to inspect our stock. I even showed her the manufacturer's label on the maxi skirt I was wearing as she didn't believe something forty-six years old could look so vibrant. They left half an hour later having made two purchases. So much for my initial misgivings, business was brisk, the crowd "got" us and by the time we'd rolled down the shop front on Friday night we'd covered all our costs and could finally relax and enjoy the weekend.

I was thrilled when Maureen, a friend I've made through my blog, came over to say hello. I had no idea she was coming to Towersey and recognised her instantly from her Facebook photos. Jon & her husband Ian got on famously when they discovered a mutual love for classic VWs. I've pinched the photo she took of us from her Facebook page. In case you're wondering, with our new healthy regime we don't crack open the booze until 2pm these days. 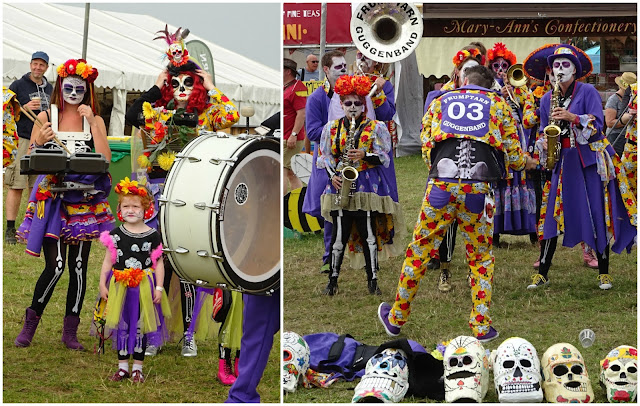 Towersey is what we call a proper festival - good clean fun for all ages. There's always something interesting going on and you don't need to move from your chair to catch some cool entertainment. This is the Frumptarn Guggenband, a band made up of musicians of all ages, playing anything from Katy Perry and Beyonce to Oasis and The White Stripes. 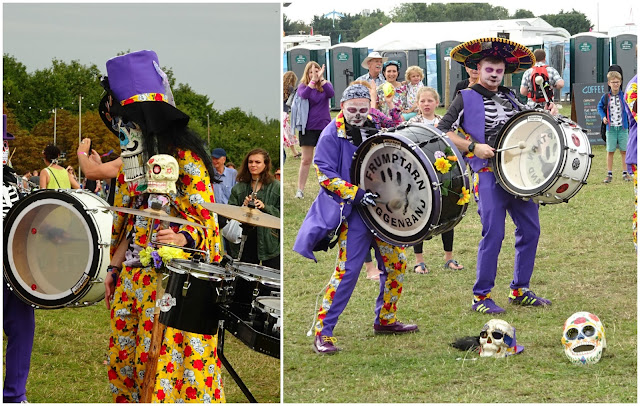 The band hail from Barnsley in Yorkshire. Frumptarn or From Up Town is what Barnsley folk will tell you if you ask them where they live. Several of the band members ended up as customers.

On Saturday night we managed to stay awake long enough to catch Newton Faulkner's headline set over on the main stage. The weather was incredible, I didn't even need a coat when we went out - something that hasn't happened since we traded at Cornbury way back in early July. I didn't really need to wear my bargain Frye boots but I've become rather attached to them. 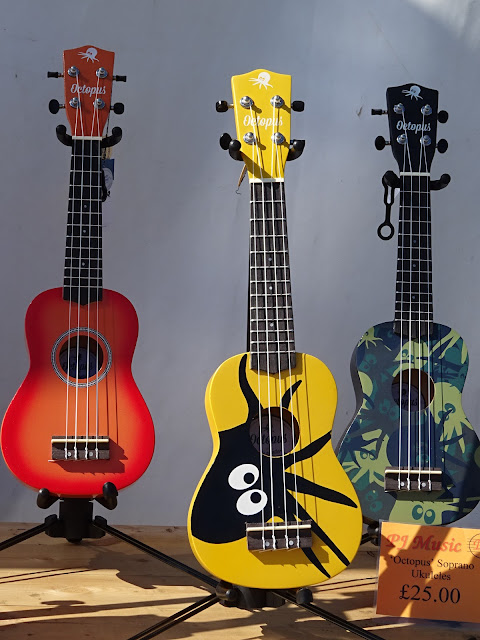 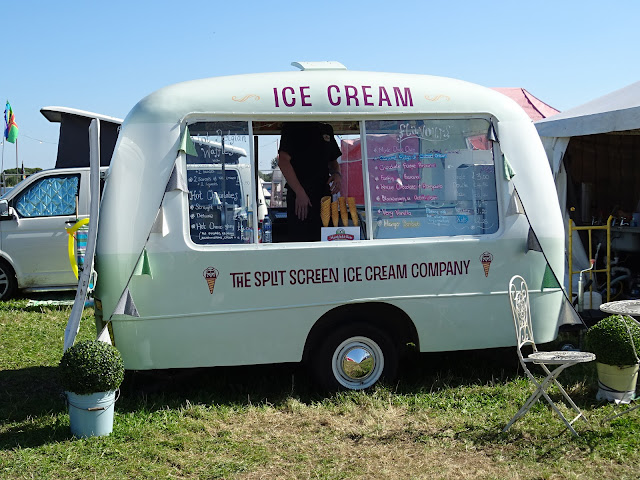 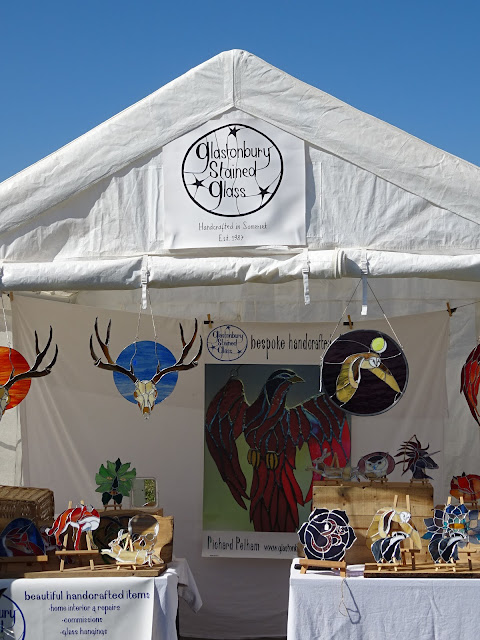 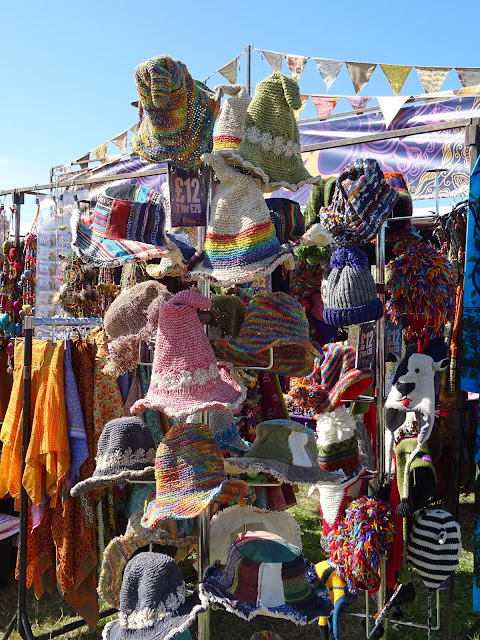 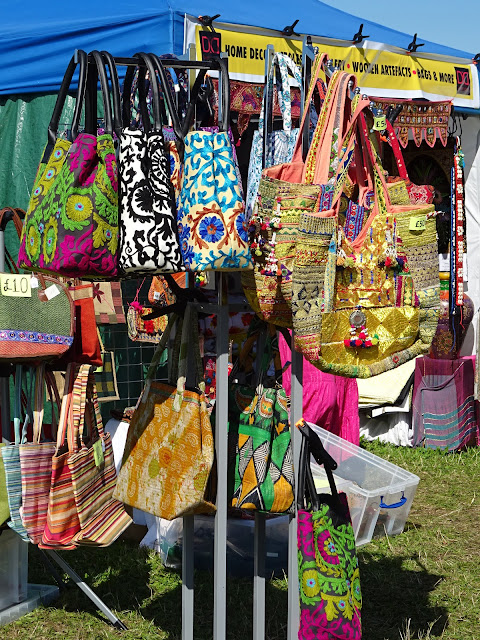 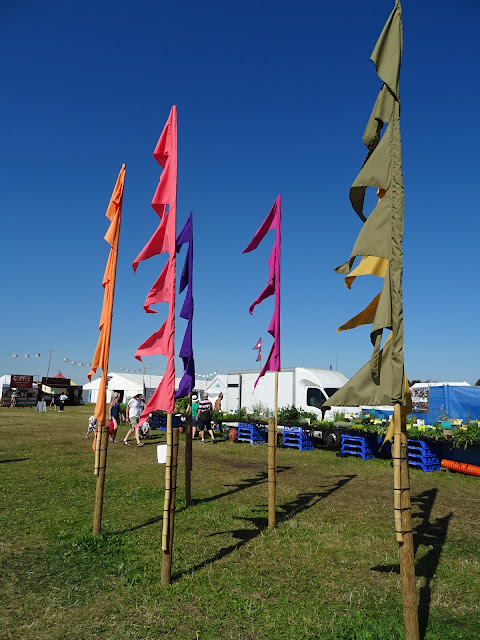 Martin our unicorn wore a different outfit every day. The kids loved popping in to see what he was wearing. Sunday's number was this rather snazzy kimono.

An August Bank Holiday weekend and no rain! Convinced that the weather was going to be crap I'd only packed a couple of Summery outfits so I had to raid Kinky's rails for something to keep me cool (hooray for selling clothes I love, it's no hardship!) Our wired head bands got such a positive reaction that by the end of the weekend we'd hardly got any left.

This was yesterday, Bank Holiday Monday. 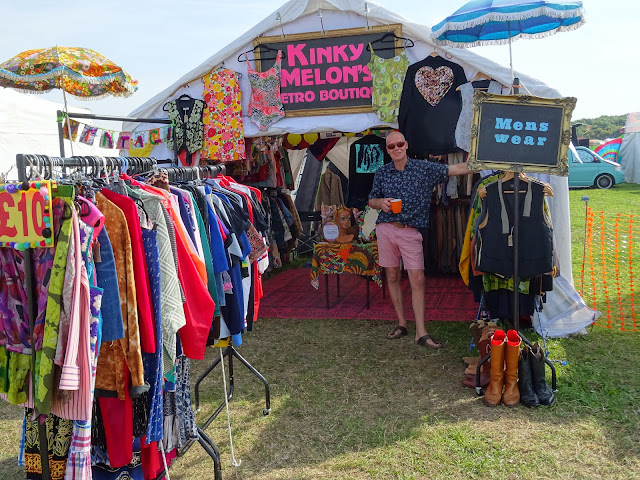 Yet more glorious weather and another outfit robbed from the rails although the dress was mine originally but had been relegated to the stockroom when it got too tight to be comfortable - it fits me fine now so it's back where it belongs.... in my wardrobe!

The Towersey festival has been running for 53 years and loads of people we met had been going for decades. We chatted to revellers who hadn't missed a year since the Sixties, thirty-somethings who'd been conceived there, married couples who'd met at the festival and entire generations of families camping en-masse often only seeing one-another once a year. 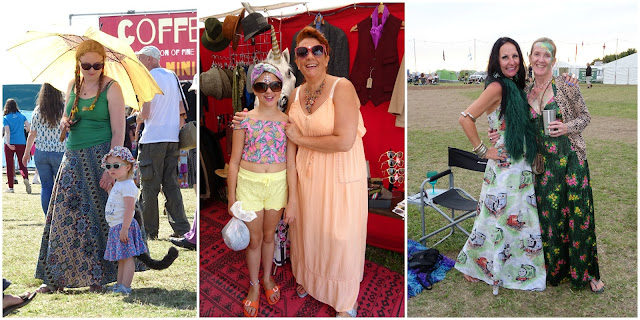 The best festivals offer so much more than music. 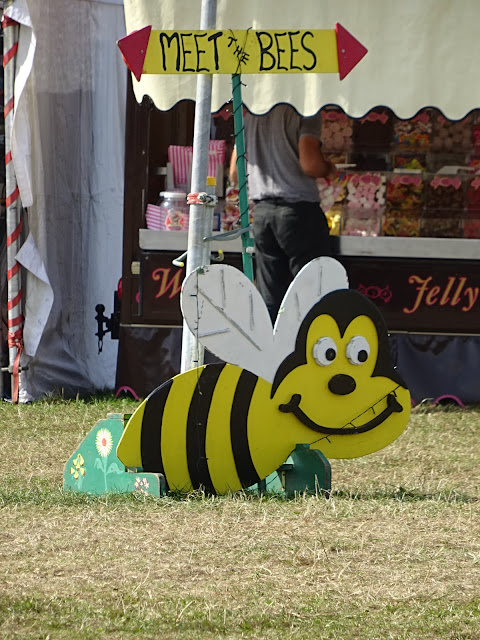 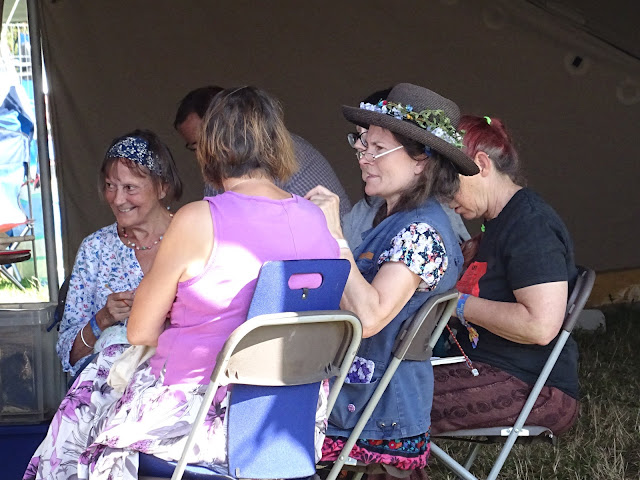 Classes in everything from cross stitch, Zumba, Yoga, crossword puzzling and Zulu dance. 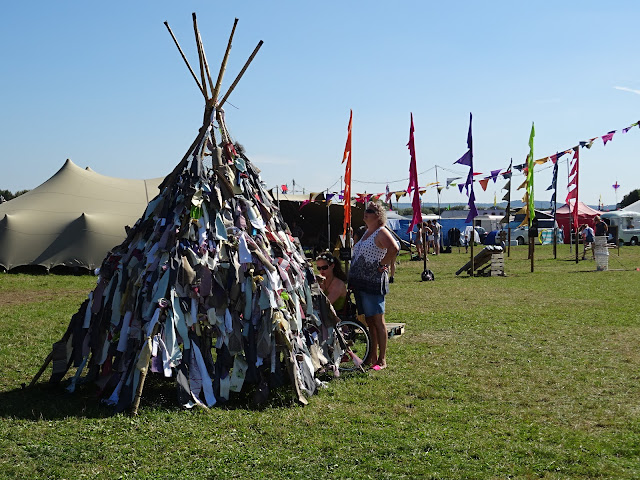 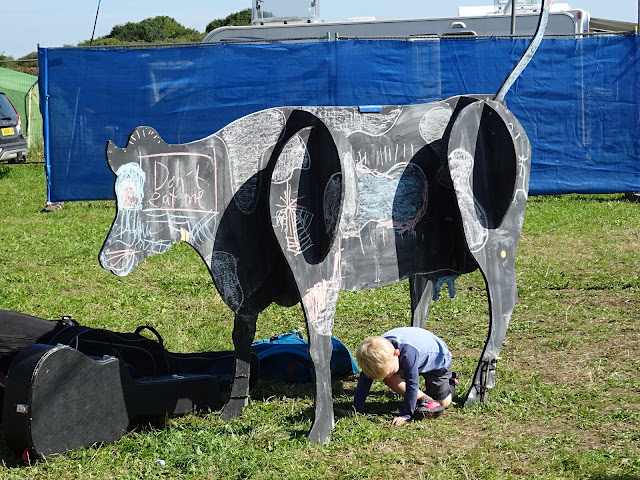 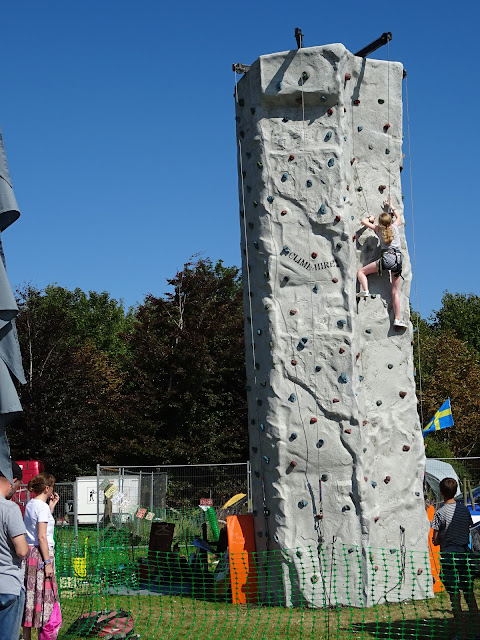 Towersey's Grand Finale involved an illuminated procession by the villagers. Once they'd passed by we packed up the remaining stock, took down the stall and headed back to Walsall, getting home just after midnight. 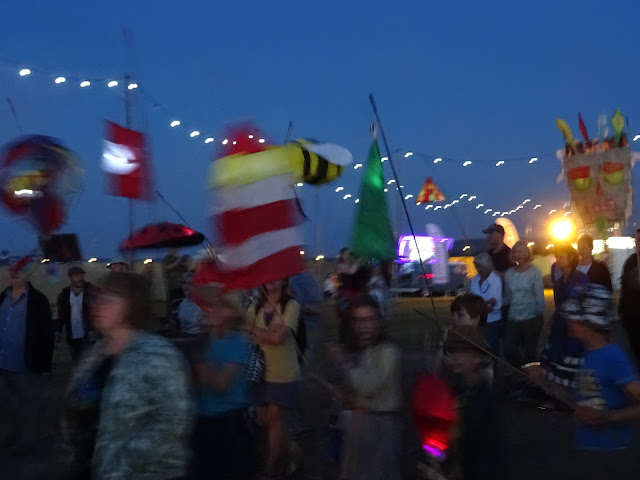 So after racking up over 50 hours of trading this weekend we had a nice restful day today? Oh, no! We need to be on site at the End Of The Road Festival tomorrow morning so today's been manic - three loads of washing, unpacking and reloading the van, shopping for supplies, planning outfits and banking the takings. It's been six days since I had a bath or washed my hair, I cannot wait to get in the bathroom.

It's just as well that we love what we do! 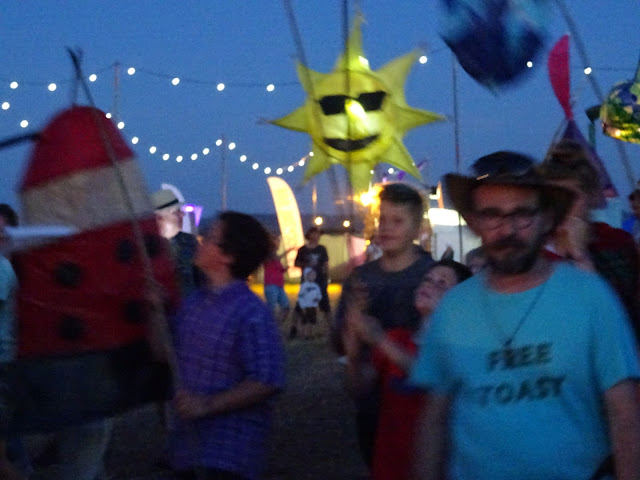 Have a fabulous week and see you on the other side!

Linking to Patti & the gang for Visible Monday.
Posted by Vix at Tuesday, August 29, 2017