Greece is The Word - Exploring Kérkyra 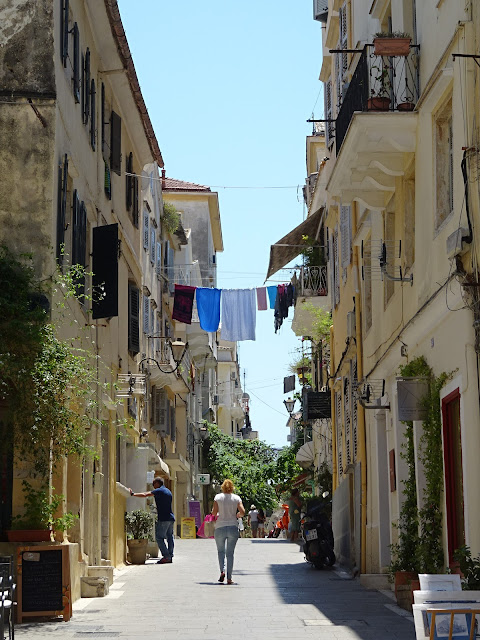 We'd heard good things about Corfu's public transport system so, with a bus stop a few minutes walk from our apartment, we decided to visit Kérkyra (Corfu Town), the island's capital. The timetable came with a warning, Buses may be late depending on traffic, so we weren't unduly worried when the bus trundled down the hill 30 minutes later than expected. Luckily for us there was a conveniently situated olive tree next to the stop, providing some welcome shade from the heat which, at 9am, was already nudging 35° C. 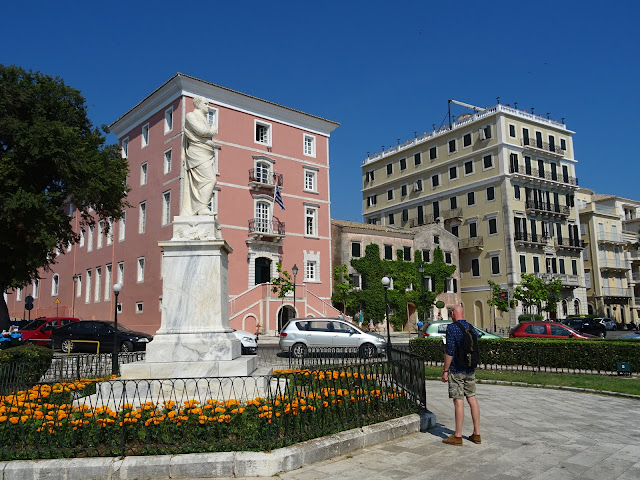 We took Natassa, our landlady's advice, and asked the driver for a copy of the return timetable before we got off the bus, also requesting he point out the departure point for the bus back as the signposts were mostly in Greek.

Using the street map from the vintage Corfu guidebook we'd bought from Baddesley Clinton's secondhand bookshop a couple of weeks previously, we navigated our way to the Esplanade and treated ourselves to an iced coffee, served with a glass of water, from one of the smart cafés overlooking Kérkyra harbour. 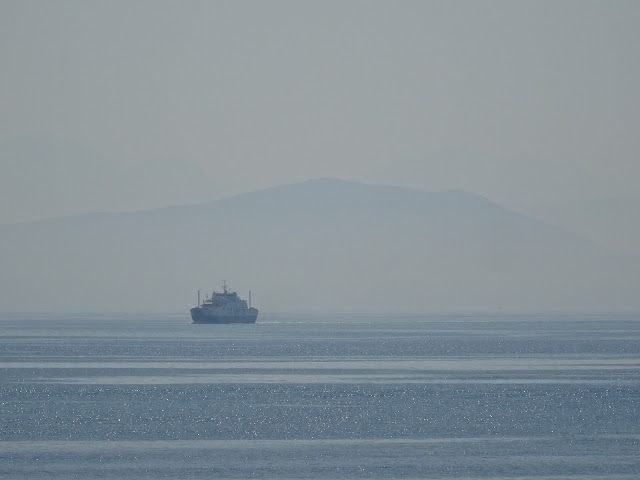 We gazed longingly at the view of neighbouring Albania across the shimmering, clear blue waters of the Ionian Sea. If we'd had longer we'd have taken a ferry and stayed there for a few of days. Albania is said to be beautiful and, as yet, untouched by mass tourism . 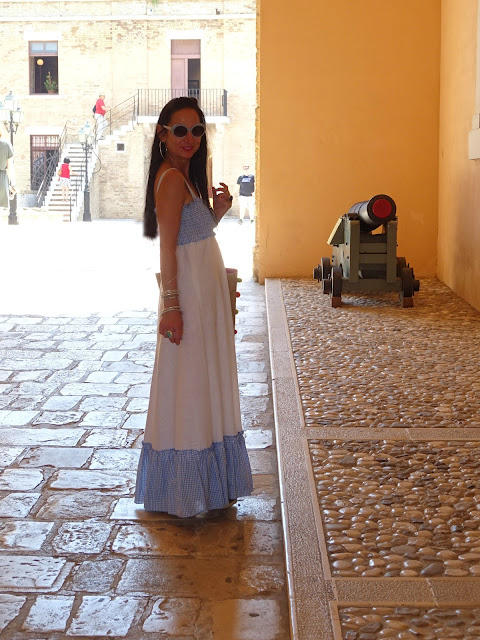 Overlooking the Esplanade were the Paleó Froúrio (Old Fort) and Néo Froúrio (New Fort), which are rather misleadingly named as there's less than a hundred years between them, one being built by the Byzantines in the mid-twelfth century and the other by the Venetian occupiers. Admission to the forts and their museums was 6€ each so, to save cash, we opted for a multiple pass to the museums in and around Kérkyra instead (14€). 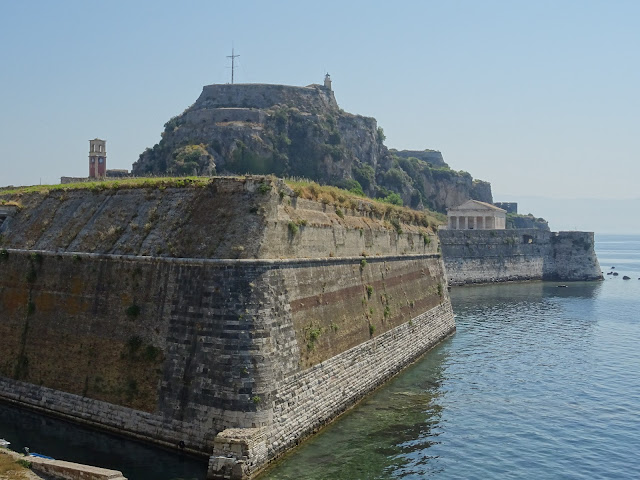 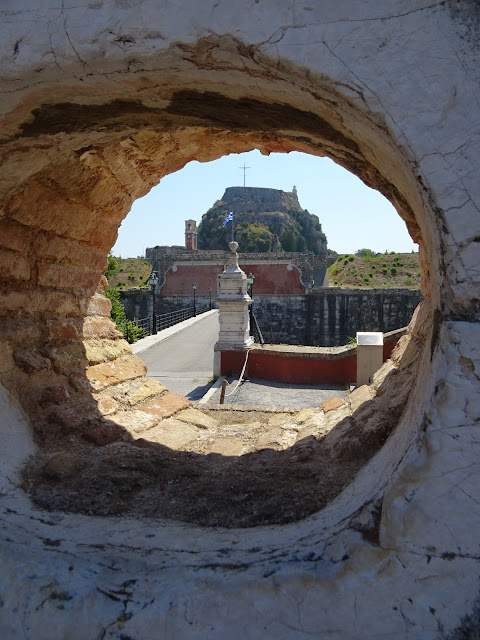 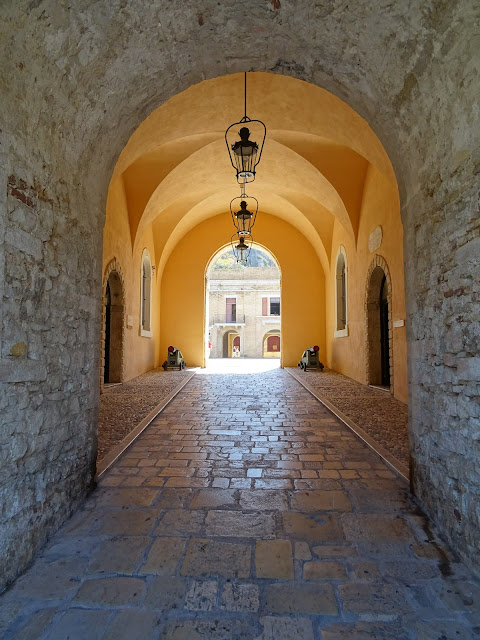 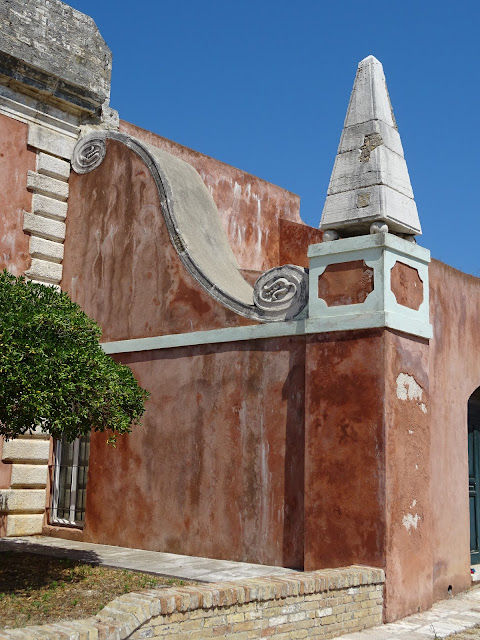 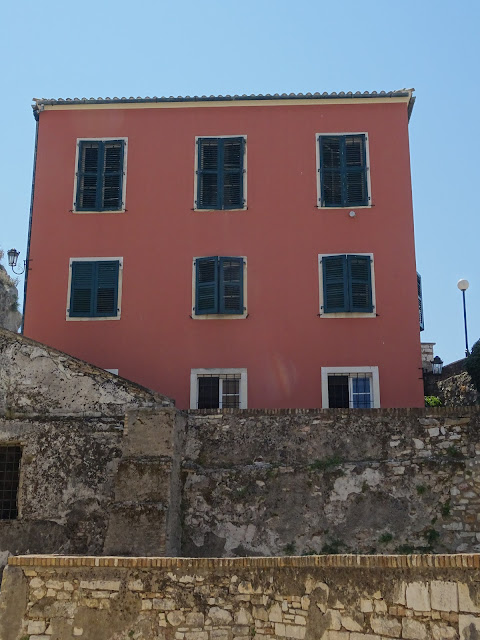 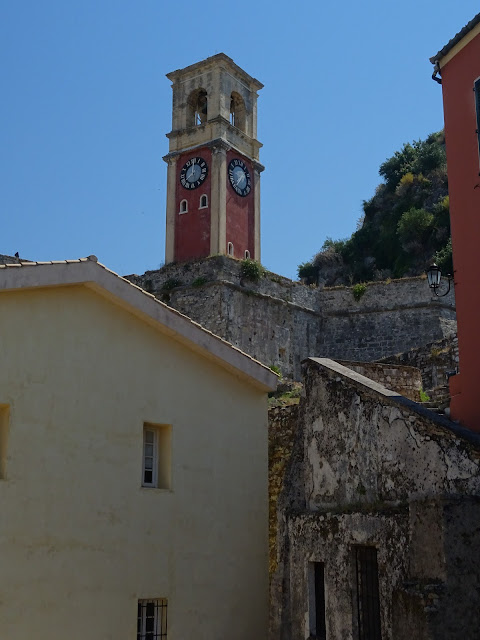 According to our vintage guidebook, the Neoclassical shrine of St George, built by the British in the 1840s and badly bombed in WW2 was closed to visitors, a disharmonious eyesore. Fortunately things have moved on and the shrine has since been fully restored with walls lined with opulent Orthodox icons, magnificent painted ceilings and cool marble tiled floors. 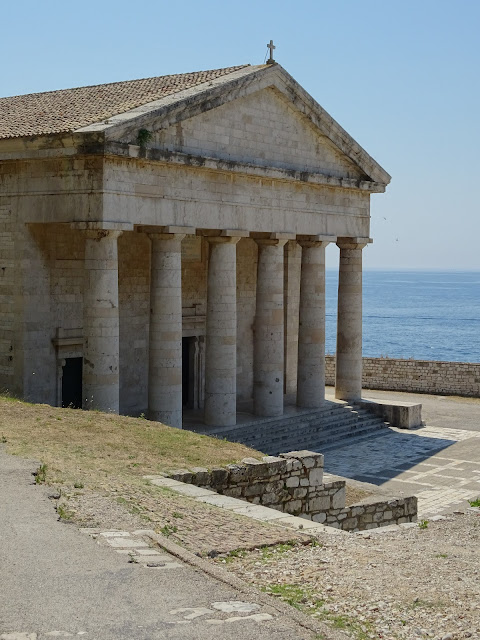 Time for a leisurely stroll around one of shady green spaces dotted around Kérkyra, this is Bosketto Durrell a public park dedicated to the writers, Lawrence & Gerald. We loved how, over the years, visitors had rubbed the brother's noses for luck, wearing away the bronze. 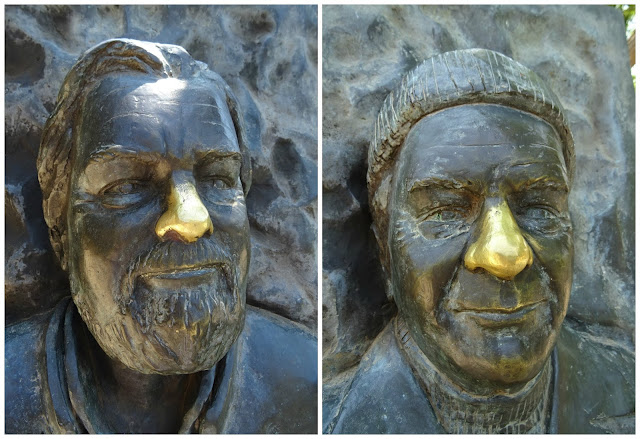 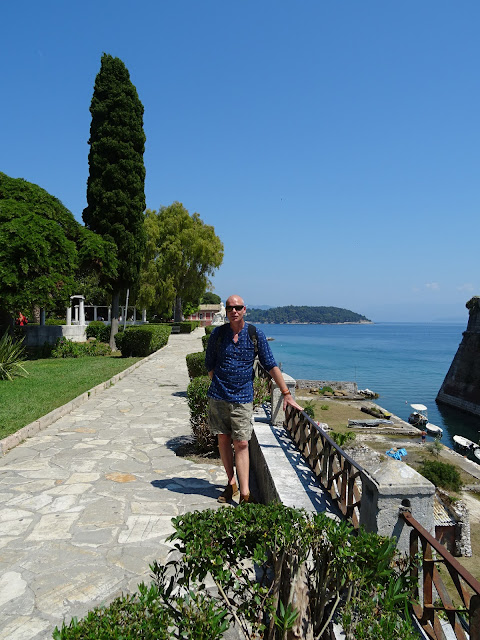 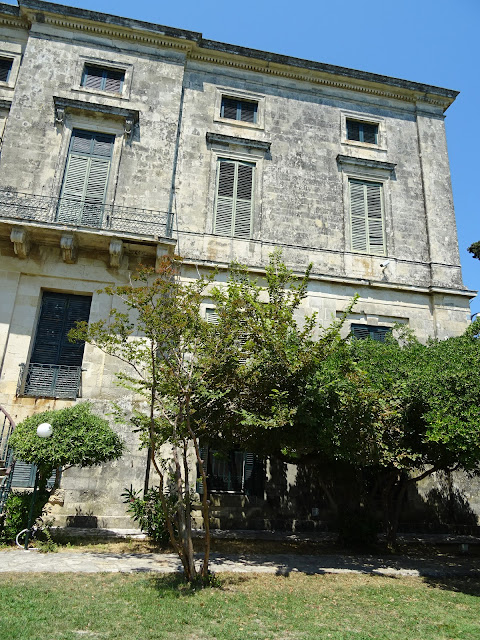 A passionate collector of Asian art, Gregorios Manos was born in Corfu and rose to become a diplomat. In 1919 when he was Greek Ambassador to Austria, he offered his large collection to the state, on the condition that he could retire on a pension and spend the rest of his days as curator of the museum. Sadly it took until 1927 for any agreement to be reached and Manos died in poverty a year later, reputedly all spent out after a lifetime of collecting. 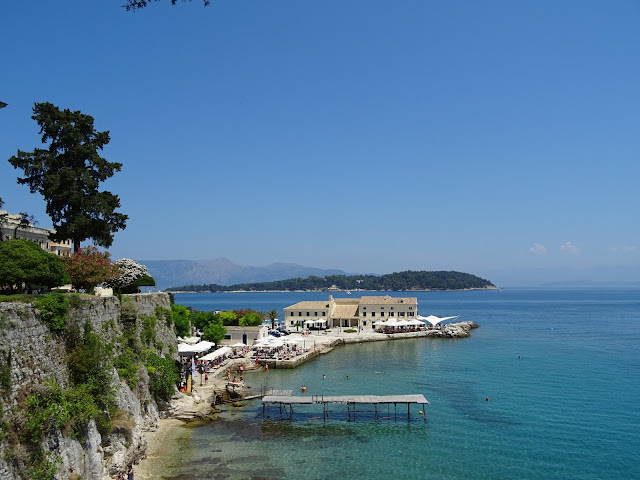 The water surrounding Kérkyra harbour is so clean you can swim in it. 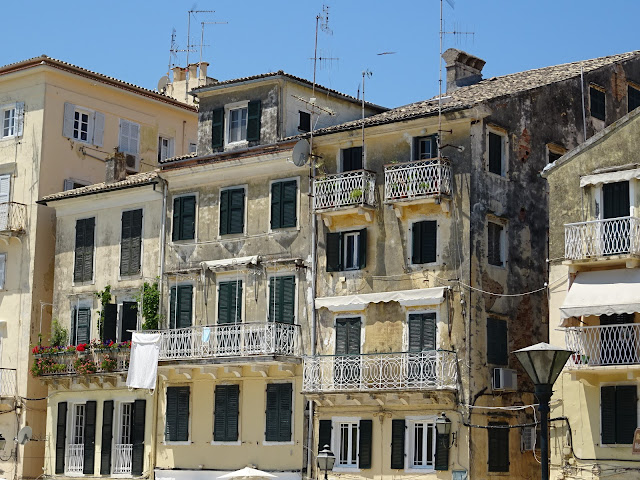 Corfu is the most colonised island in the Mediterranean with the Corinthians, Romans, Byzantines, British and French all having taken over. The most influential architecturally has to have been the Venetians, whose graceful legacy makes Kérkyra so alluring. 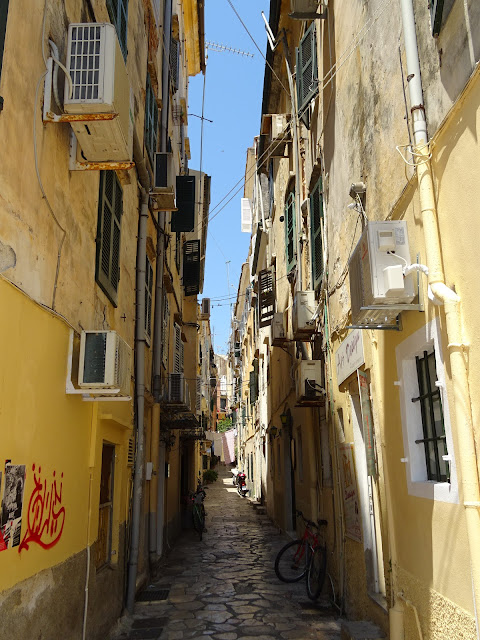 Corfu is closer to Italy than it is to Athens you can tell. Meandering the maze of narrow streets that cluster higgledy-piggledy between the old and new forts is a joy. It's pointless trying to follow a map, the fun is getting lost and exploring interesting side streets. Washing hangs drying above your head suspended on lines strung between buildings, scooters buzz down the cobbles beeping for you to jump out of the way and baskets are glimpsed, descending from windows way up high, waiting to be filled with the goods from tradesmen in the street below. 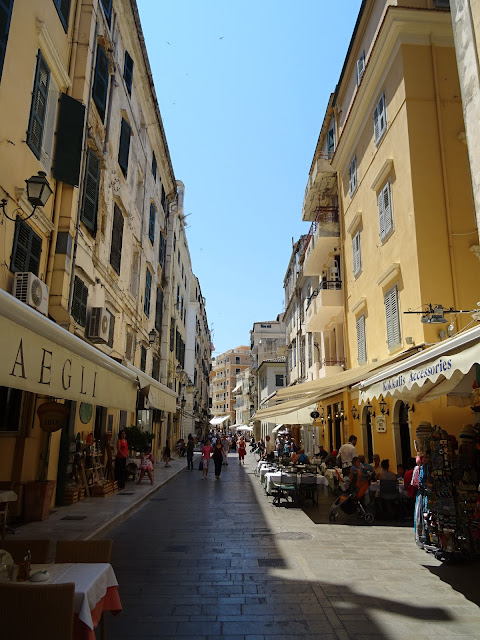 In Greece lunch is usually taken between 2 - 3pm so, after a morning spent exploring, we decided to follow the locals and eat on the Listón, the elegant terrace of shady cafés bordering the Esplanade and reminiscent of Paris's Rue de Rivoli, hardly surprising as the area was designed and built by a Frenchman. 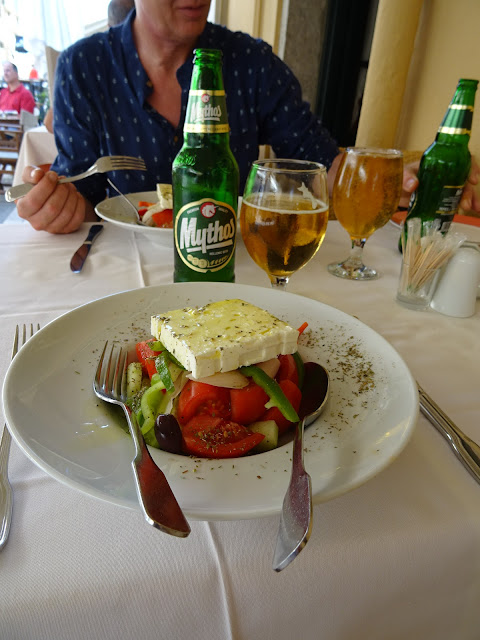 The locals have been eating at Aegli, Kérkyra's oldest restaurant for decades (although nobody seems quite sure just how long). For around 25€ we devoured wonderful Greek salads washed down with ice cold Mythos beer. Parisian chic minus the Parisian price tag. 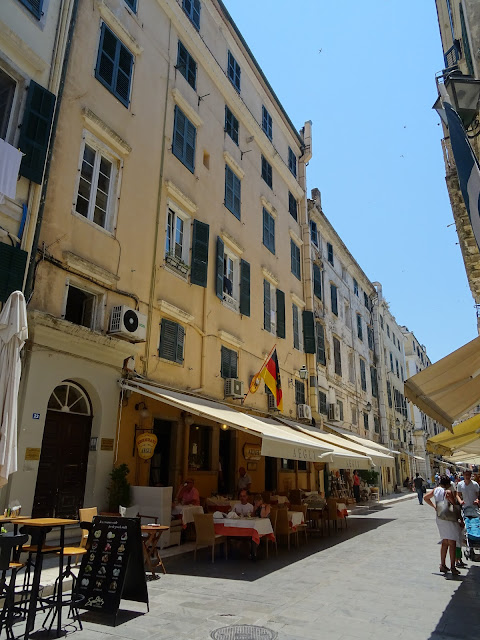 We could have spent the rest of the afternoon sitting in the shade, watching the world go by, distracted only slightly by rumbles of conversation as office workers exchanged gossip over lunch and the clank of cutlery as waiters hastily laid tables in readiness for the next wave of diners. 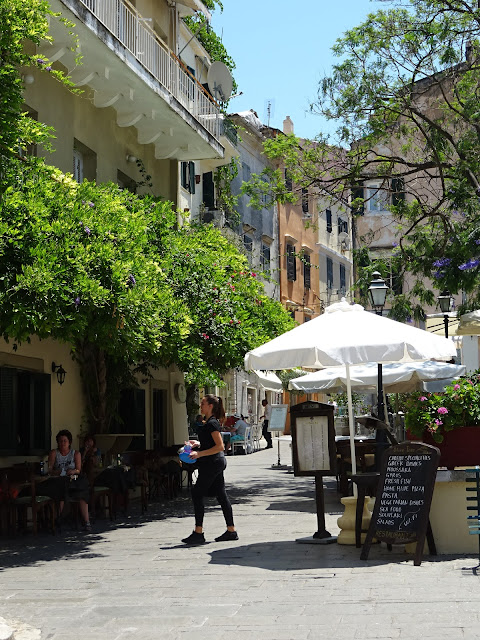 But we had a bus to catch and, with just enough time for a bit more sightseeing, we admired the pristine pink and white Orthodox cathedral in the Town Square (built in 1577 but as good as new). 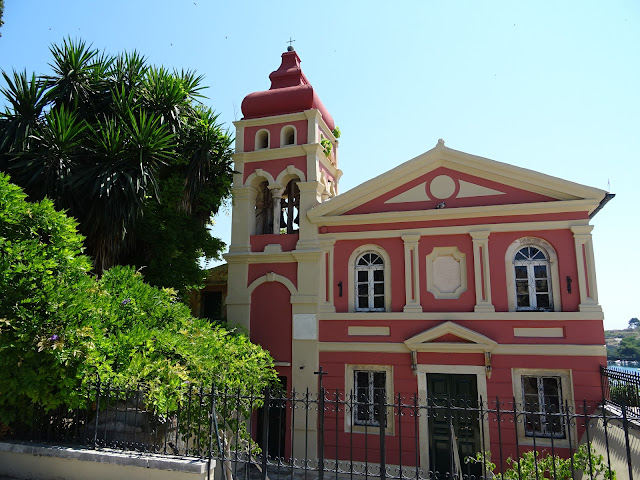 We strolled along the cobbled, tree lined streets past the elegant town hall in Guilford Square making our way to the bus depot. 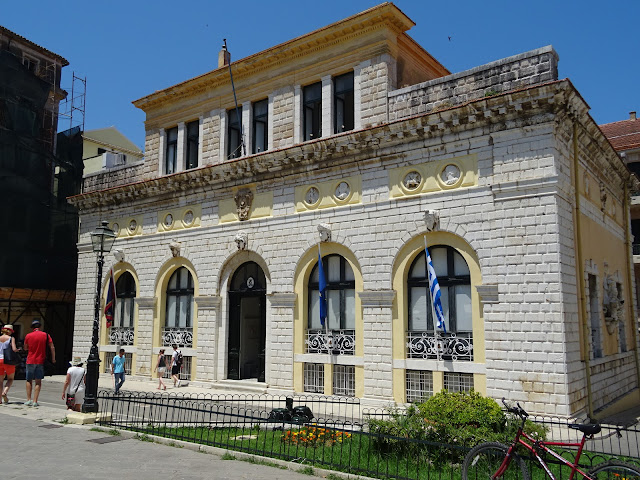 Buses from Paleokastrítsa to Kérkyra Town run eight times a day, take 45 minutes and cost 2.5€ each way. The last bus back is at around 8pm.

Email ThisBlogThis!Share to TwitterShare to FacebookShare to Pinterest
Labels: Greece