All Greek To Me - Beautiful Paleokastrítsa 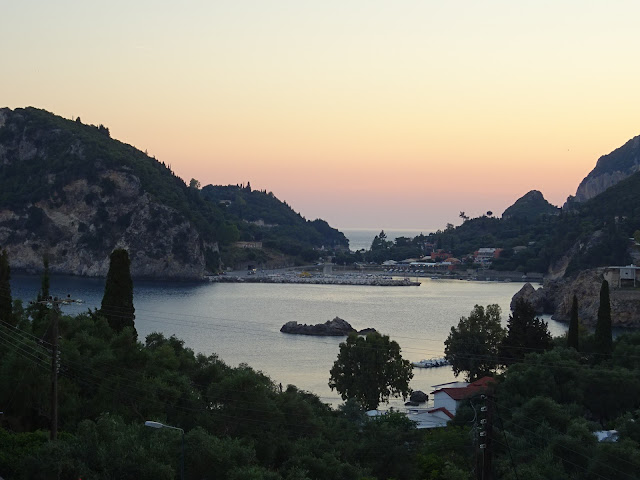 I know what you're thinking...what on earth is she doing writing a blog post hours after getting back from Greece? Trust me, after this morning's 1.30 am start, a taxi, a plane, two trains and another taxi I'd like nothing more than to snooze in front of the telly in my pants, drink tea and get reacquainted with the cats but there's a brigade of workmen up cherry pickers, scaffolding and ladders, chipping away at the exterior of the house, so I'm doing my best to stay awake. 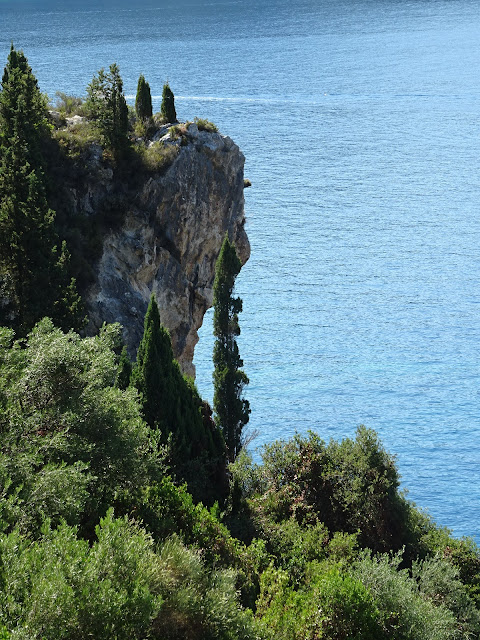 Anyway, on to Corfu and our first European Summer holiday in over a decade.

After hours of research we chose Paleokastrítsa in the northwest of the island, described by many as the most beautiful spot on Corfu and by some, in the whole of Europe.  One of the first to fall for its charms was Sir Frederick Adam, British High Commissioner to the Ionian islands in the early 19th century. Paleokastrítsa's appeal lay in her deep wooded slopes, blue sea and bathing beaches but the problem was the relative inaccessibility so Sir Frederick had a road built to the village, with the ostensible purpose of erecting a military convalescent home there. It was never built but Sir Frederick found it a lot easier to take his regular picnics in Paleokastrítsa. 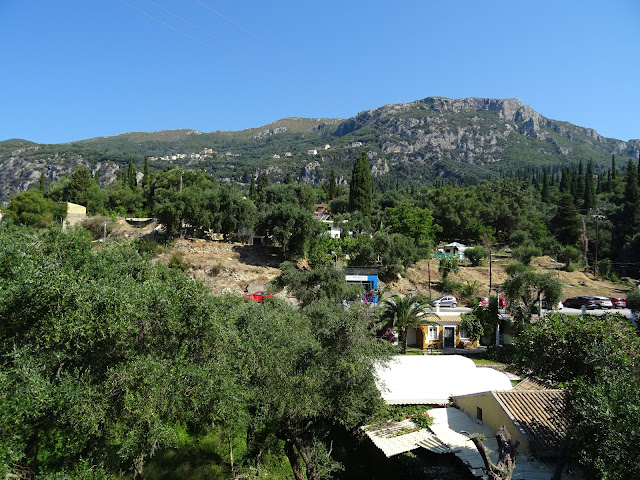 Be warned, if you're not physically fit then Paleokastrítsa might not be the place for you. The streets are very steep and there's lots of - often rather rickety - steps involved. 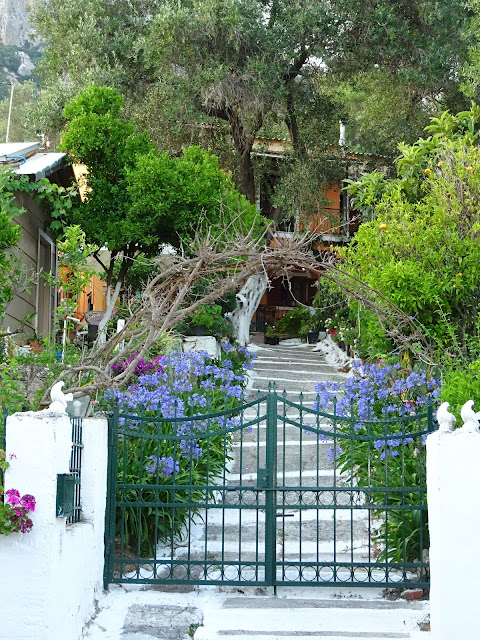 Identified as the Homeric city of Scheria, where Odysseus was washed ashore and escorted by Nausicaa to the palace of her father, Alcinous, King of the Phaeacians. You'll find references to these tales in the names of the bars and tavernas all over the village. 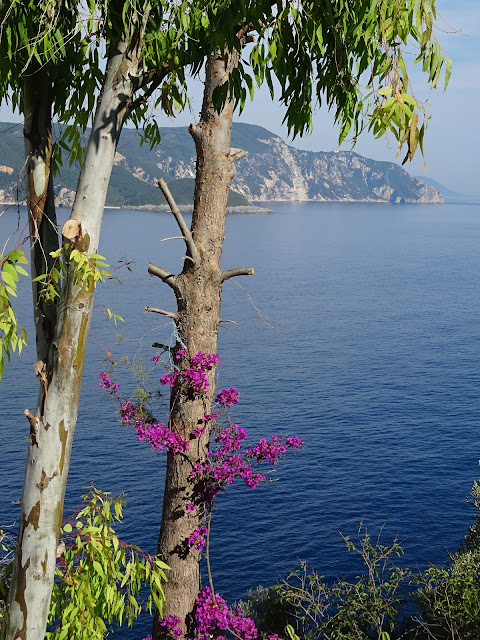 During the peak months of July & August, Paleokastrítsa is unsurprisingly heaving with tourists but for our mid-June visit it was perfect. Busy with trippers during the day but never overwhelming or claustrophobic and by night laid back and low key with just enough tavernas to ensure a buzz. 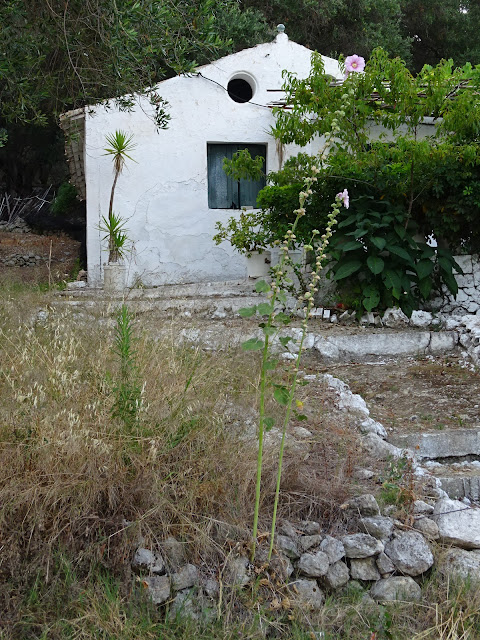 The three and a half hour flights cost £80 return with Ryanair from Birmingham airport. We opted to pay an extra £15 for 15 kg of hold baggage so we could take sun cream. I did consider only taking hand luggage and buying our sun protection locally when we landed but, on further investigation, it would have cost us over 50 quid (we pay £5.50 a bottle for it at home, Greece ain't cheap!) 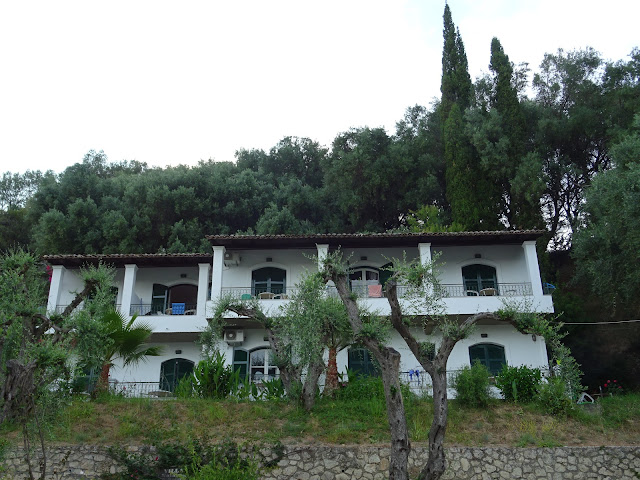 Here's where we stayed, one of the ten studio apartments at Natassa & Spiros, costing £180 for the week. In a quiet spot surrounded by olive groves, with all mod cons (including A/C, which we both hate and refuse to use - preferring an open window and plenty of insect repellent) plus a balcony with a mountain view.

We didn't cook but took full advantage of the fridge (and the nearby supermarket) by breakfasting on fresh fruit and Greek yogurt every morning and downing an ice cold Mythos (or Alpha or Hellas) beer after our evening shower with a night cap of Albatross white rum, cola and a wedge from lemon foraged from the groves overhanging the pathways.


Although undeniably pretty, the main town beaches with their rows of sunbeds and parasols for hire, amplified music, water sports and cocktail bars just aren't our thing. 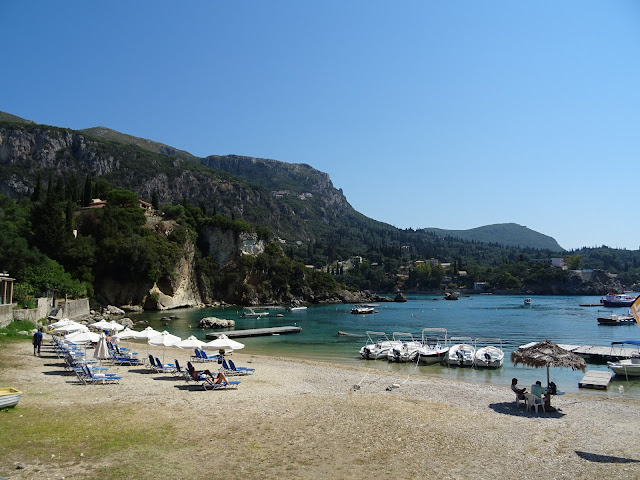 Walking past the tourist hot spots and investigating some rickety steps led us to discover this quiet little cove where we'd spread our blanket and, for hours at a time, we'd be alone with nothing but the sound of the Ionian Sea gently lapping the bleached shingle and the chirp of the cicadas. 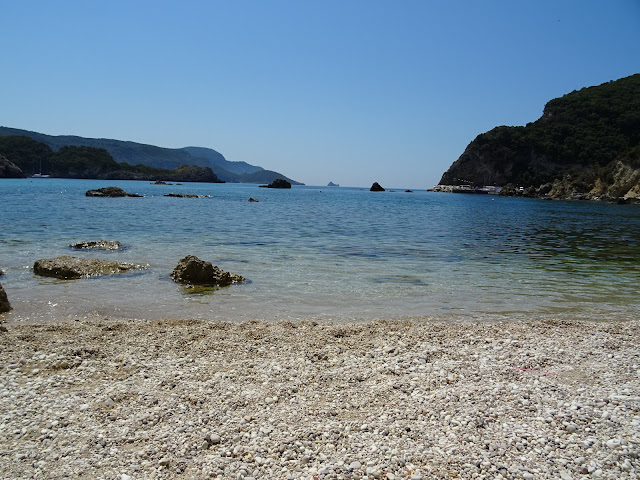 By 2pm the area beneath the steps are in shade and perfectly timed for our picnic of rustic bread, tangy feta cheese, spicy olives and misshapen locally grown tomatoes as big as tennis balls picked up from the supermarket on the way to the beach. 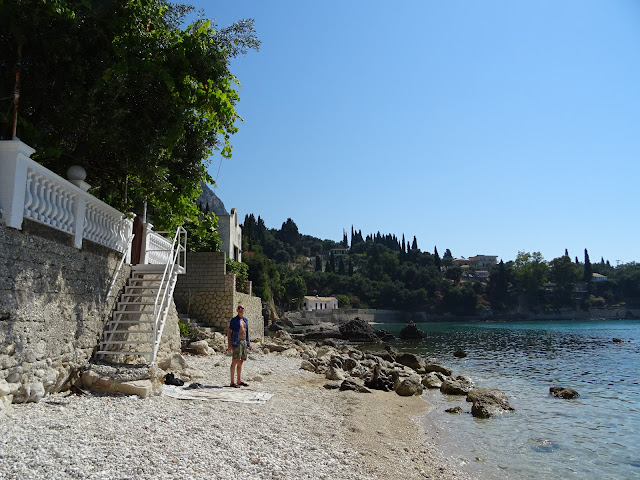 Much as I love sea swimming the waters around Corfu were icy. The locals told us to come back in September when the Ionian Sea is as warm as a bath. 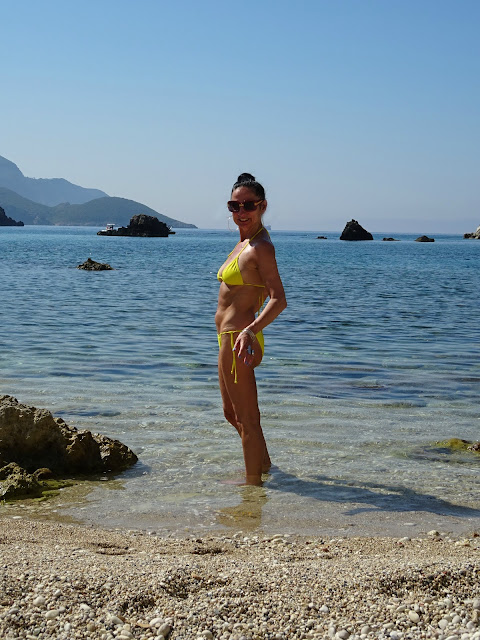 In fact September and October seem like the ideal time to visit. The sea's warm, the heat's less intense and the roads are safer and quieter as the bulk of the tourists have gone. 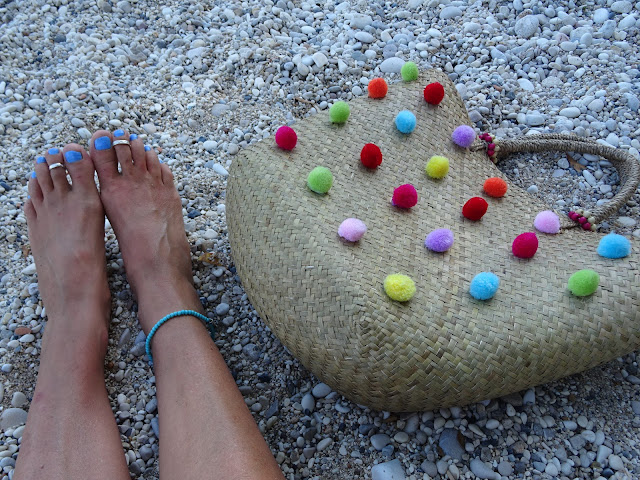 Overlooking Paleokastrítsa on a rocky bluff high above the village is the Byzantine Theotókou Monastery, believed to have been established in the thirteenth century. 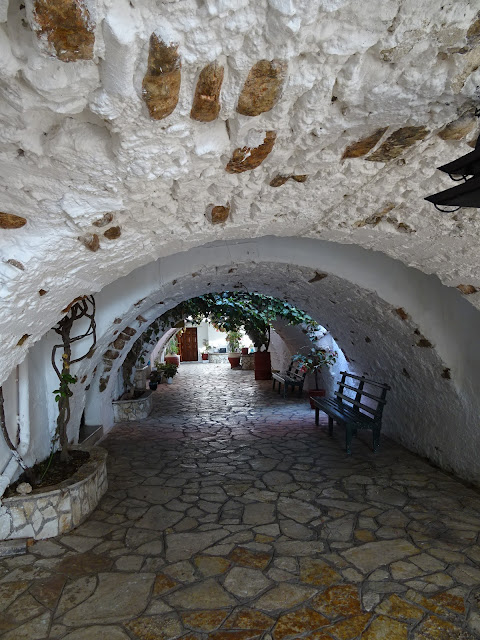 Open daily from 7am - 1pm and 3pm - 8pm (but best around sunset when most of the day trippers have left) it's a wonderfully peaceful way to spend an hour or two, petting the many cats that seek sanctuary there and drooling over the velvet embroidered Orthodox priest's jackets and bejewelled head dresses in the on site museum. 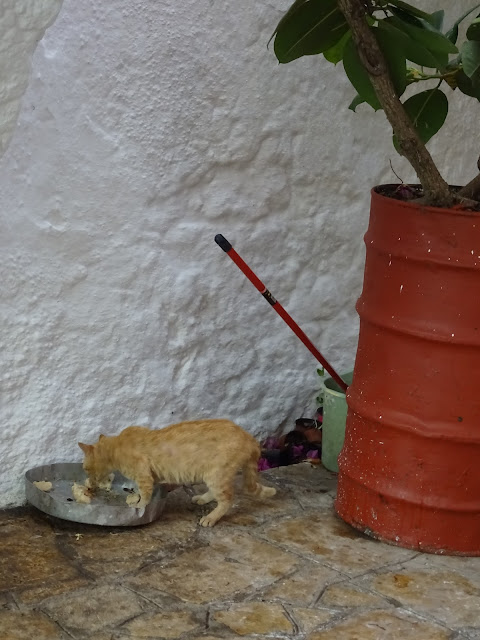 Admission is free but donations are welcomed (and help keep the cats in fresh fish). 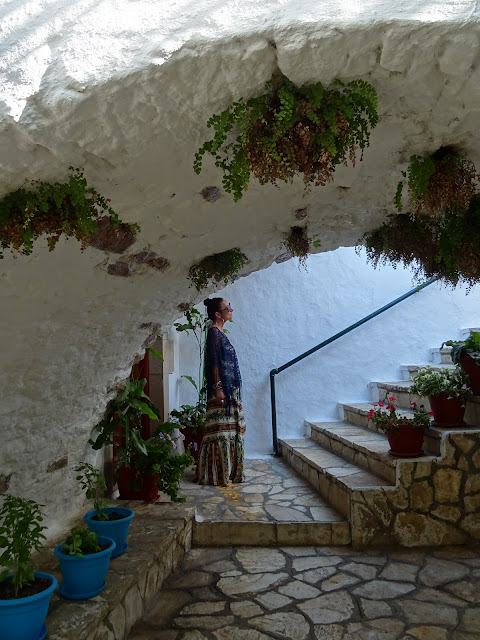 It is requested that visitors dress modestly (I never travel without my shawl) although there's a stock of particularly hideous granny skirts, voluminous trousers and smock tops scantily clad tourists of all sexes are forced to wear if they turn up half naked. 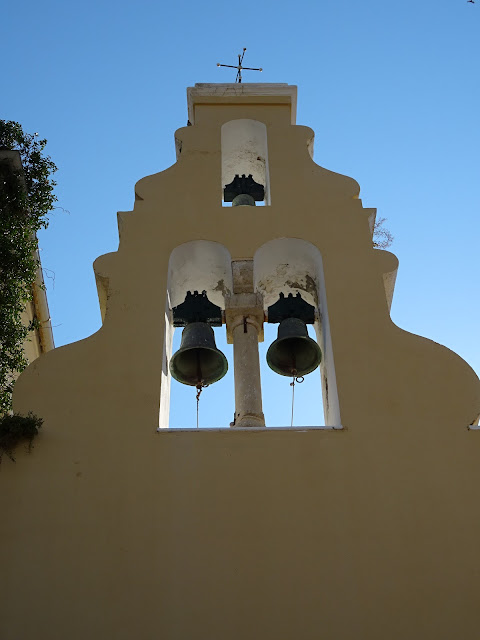 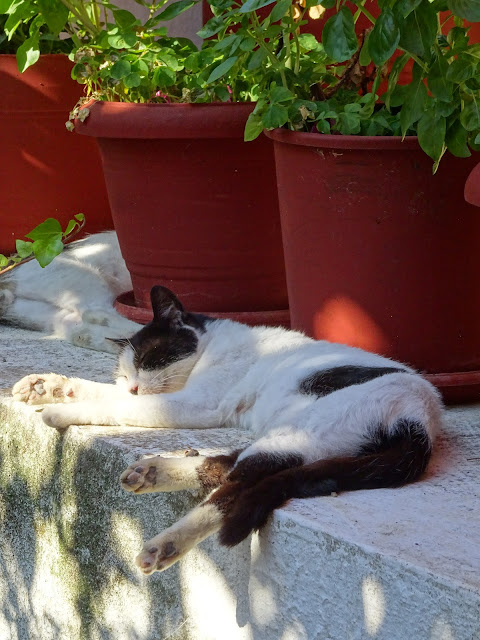 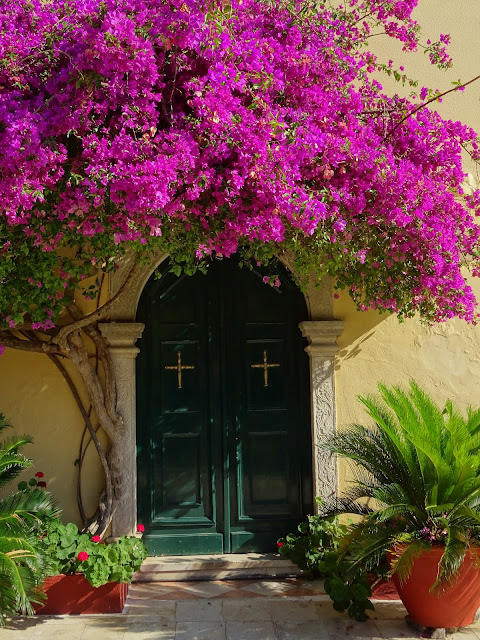 Brace yourselves, there's loads more to share (the food, a road trip, Corfu's capital city and what we wore) but in the meantime I'll leave you with a video of La Grotta, possibly the bar with the best view in all of Corfu.

In the meantime the workers have just knocked off so I can finally strip off the sun dress I've been wearing since the early hours, have a bath and phone for a pizza.

Email ThisBlogThis!Share to TwitterShare to FacebookShare to Pinterest
Labels: Greece