How The Waist Was Won - Reclaiming My Figure After 50 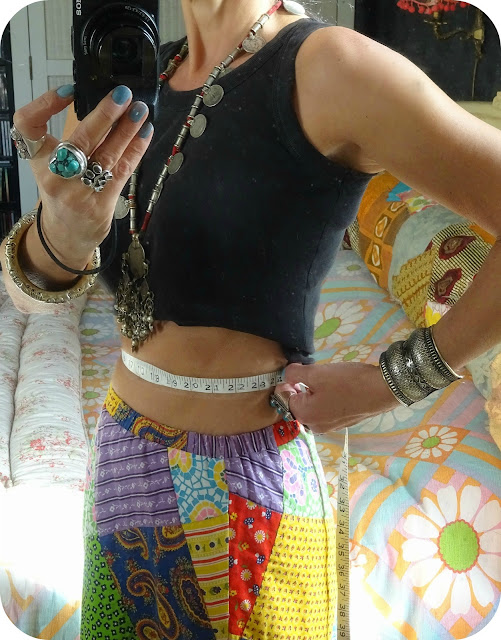 Eighteen months ago I started to notice that my clothes were getting tighter. Maxi skirts that had previously fastened with ease I now found myself struggling to zip up whilst form-fitting dresses strained at the seams and showed bulges I'd never noticed before. With sadness I relegated the offending garments to the Kinky Melon rails, where customers would occasionally pull them out and exclaim how modern day women just didn't have waists that small. I nodded in agreement, not daring to admit that those clothes had fitted me not so long ago. 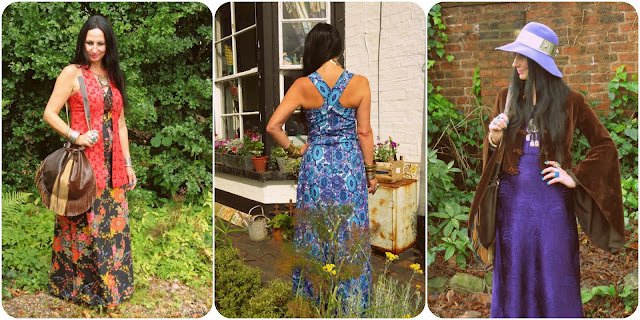 Although I was still within the ideal weight range for my height (I'm just over 5 foot 3") I felt bloated and lumpy and had started to dislike many of the outfit photos Jon took for my blog. Several bloggers I follow had written of their changing body shape and of piling on the pounds once they'd hit middle age. At first I read on and accepted this as an inevitability until, with a big birthday approaching and far too many wardrobe crises where I felt horrible in everything I tried on, I decided enough was enough. I wasn't going to be a flabby fifty year old. 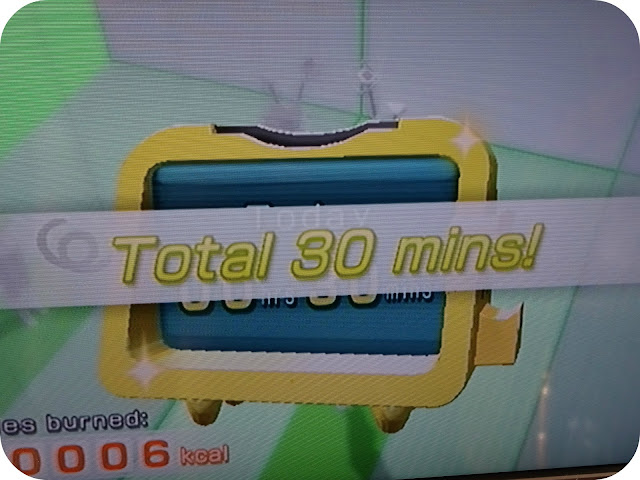 They say that to successfully lose weight you have to eat less and move more but the moving bit wasn't the problem. Ever since Jon bought me my Wii Fit 9 years ago I've exercised for thirty minutes a day at least five days a week, more if I'm not doing a fair. When I had my left hip replaced in 2006 I was told that my other hip would need replacing in five years time. Eleven years on, I've successfully managed to dodge the knife (although I underwent a vile intravenous steroid injection back in 2014). The X-rays show that my hip is in a pretty poor state but I walk fairly well, sleep soundly and deal with the pain from occasional flare-up. The orthopaedic surgeon says that it's all down to my positive mental attitude but I say it's taking regular exercise. I never use a twinge of pain as an excuse for not exercising, that's just giving in. 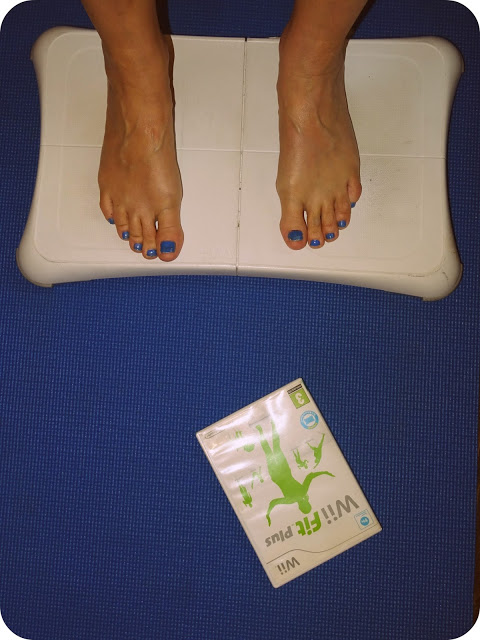 I'm an active person. I don't drive and living a mile from the town centre suits me just fine. If I break my last sewing machine needle, run out of hair dye or realise that I need a crucial ingredient for dinner I simply pull on my boots, grab my purse and walk into Walsall and I'm back home in forty minutes (unless I get distracted by a charity shop or bump into someone I know).  Although I don't class working at fairs as exercise, carrying huge bags loaded with clothes up and down stairs and spending a minimum of 8 hours on my feet more than makes up for not using the Wii Fit on a working weekend.

No, the problem wasn't exercise, it was food. Whilst I hate ice cream and cream, I'm not a fan of chocolate, biscuits or cake and I only drink fizzy drinks as a mixer in rum, on reflexion, my 48 year vegetarian lifestyle wasn't as healthy as it could have been. Over the last couple of years I'd slipped into bad habits, demolishing huge portions, not always opting for the healthiest option and eating between meals (something I'd never used to do.) It was time to reign in the bad habits, make some subtle changes and to use being 50 as a springboard for a healthy middle age. 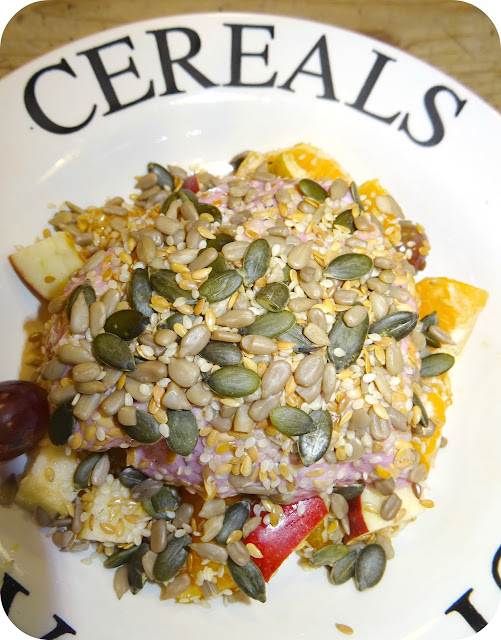 The first thing to go was the enormous bowl of Lidl fruit and fibre I usually ate for breakfast (despite it's size I was always starving by 11am). This was substituted for a quarter of a tub of low fat natural yogurt whizzed up in the mixer with whatever berries* were going cheap on the market and a banana**. This is spooned over oranges, apples and grapes (or whatever other fruit is available that week) and I'll sprinkle Poundland's linseed and seed mix over the top. My new breakfast takes longer to eat and I enjoy every mouthful of its differing textures and tastes. Despite it being lighter I'm no longer hungry when it gets to mid-morning.

*Blueberries and raspberries are £1 for two punnets at the moment so I've stocked up, washed them, frozen them in zip locked bags and use them straight from the freezer. **I buy reduced to clear bananas when they're starting to turn freckly. I peel them, slice them thinly, lay them on a baking sheet lined with grease-proof paper, cover them in clingfilm and stick them in the freezer for two hours. When they're frozen  I transfer them into a zip lock bag and chuck a handful in my yogurt. 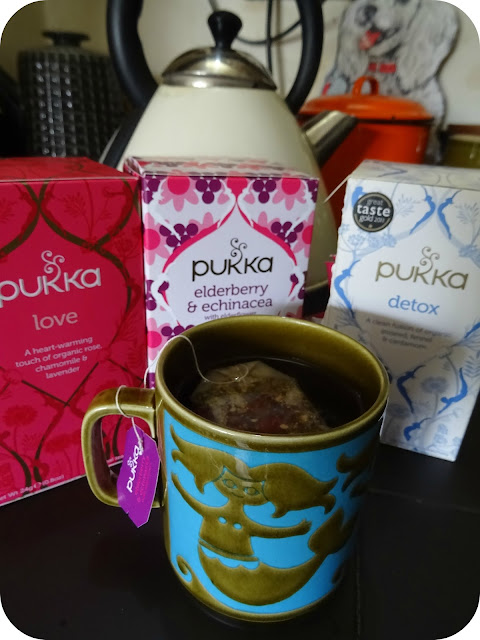 The endless teas and coffees I'd make and usually end up chucking half down the sink were replaced with a single mug of tea (made with skimmed milk) with my breakfast and either tap water or organic Pukka Tea for the rest of the day. I always used to drink Pukka but when I became self-employed I ditched it in a bid to save money. Yes, at £2.49 a box it's not cheap (but it's sometimes on offer in Holland and Barrett) but it's hydrating, tastes good and has made a surprising difference to my circulation as my feet aren't continuously cold any more. I'm not that bothered by coffee, I sometimes have a mug (white, instant & fair trade) after breakfast but I'm not fussed if I don't and I wouldn't dream of buying an expensive cardboard cup of it when I'm out.

Lunch used to be a big, freshly-baked ciabatta roll, which Jon could never resist the smell of when he walked past the bakery counter in Lidl. This was deep filled with a slab of cheese and salad. Now it's a wholemeal bread sandwich , usually with some salad and low fat coleslaw, and occasionally a slither of vegetarian cheese. I always used to have a bag of crisps on the side, now if I do it's the lower fat, baked alternative (but usually I don't). Lidl's 17p curry flavoured noodles are a spicy lunchtime alternative if we're pushed for time or running late.


Dinner hasn't really changed, I just eat smaller portions of it. If there's any left over we'll eat it the next day rather than finishing it just for the sake of it. After all, I'm not a bin. We try to eat our main meal before 6pm but when we're doing fairs that's pretty much impossible - that's when the healthy eating goes out of the window and we'll invariably stop off for a bag of chips on the way home (which we share) with vegetarian curry sauce. Not that the occasional lapse is a problem, half a bag of chips isn't going to kill me. 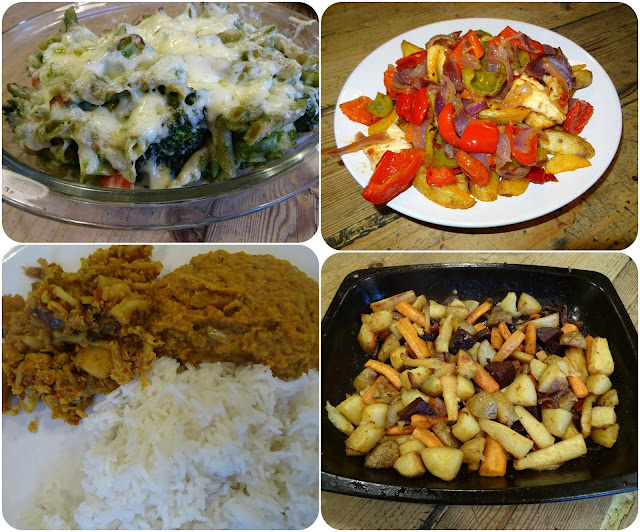 We never have a meal plan, we buy whatever fruit and veg is cheap on our local market (or the corner shop) and either Google ideas for the ingredients we've bought or leaf through our book of fail safe recipes collected over the years. This week we've had root vegetables (beetroot, parsnips, carrots and onions) roasted in olive oil with whole cloves of garlic and fresh rosemary from our garden; Roast onions, red & green peppers and Haloumi over potato wedges; Wholewheat penne (we used to buy white pasta to save a few pennies, not any more) with grated vegetarian Cheddar, broccoli, leeks and cherry tomatoes in a homemade pesto made using wild garlic foraged from our garden (there was loads so we had this two days on the run); Gobi Not Aloo (I used this recipe but substituted the potatoes for parsnips), slow cooker dhal (the recipe makes loads so I batch freeze it) and basmati rice. Tonight we're having broccoli sabzi (recipe HERE) and tomorrow it'll be Jon's homemade spicy vegetarian pizza - we used to have one each, now we share one!


Jon's a fiend for snacking and rarely an evening goes by without him cracking open a bag of crisps, Bombay Mix or nuts. Although I wasn't hungry I had started to get into the habit of having some too, just to be sociable. Now I just say no (and we're still friends.)


Drinking isn't a problem - at least I don't think so. We abstain for at least 48 consecutive hours each week. At home we'll drink either white rum and diet cola or vodka with slimline tonic. When we're out it's beer and lager. Pear cider is for Summer festivals. We usually have a drink on a Wednesday night. If we're not working we'll drink on a Friday and a Saturday night but if we're doing a fair we never booze the night before (and we're usually too tired to enjoy alcohol when we get home so we don't bother). No booze at the weekend means an all-dayer in Wetherspoons on a Monday. Of course this doesn't happen when we're in India and we'll drink every day for a month and when the festival season kicks off - in less than six weeks time - it gets messy.


Since I started eating more healthily my BMI has gone from 22.26 to 20.56, my waist is back to the size it was in my 30s, I've lost a stone in weight (and maintained it for four months) and a lot of the clothes I'd unwillingly sacrificed to the Kinky Melon rails are now back in my wardrobe and that's all from making a few small changes - no starving or faddy diets or silly meal replacements or those dubious pills and potions people on Facebook are always trying to flog you. Next time somebody tells you that gaining pounds and losing your waist is part and parcel of the ageing process take no notice. It's a big a lie as telling you that you have to dress down, wear muted colours or cut your long hair off just because of a sequence of numbers on your birth certificate.

Email ThisBlogThis!Share to TwitterShare to FacebookShare to Pinterest
Labels: Food, It's All About Me