Viva Goa - Travels To Goa and Beyond 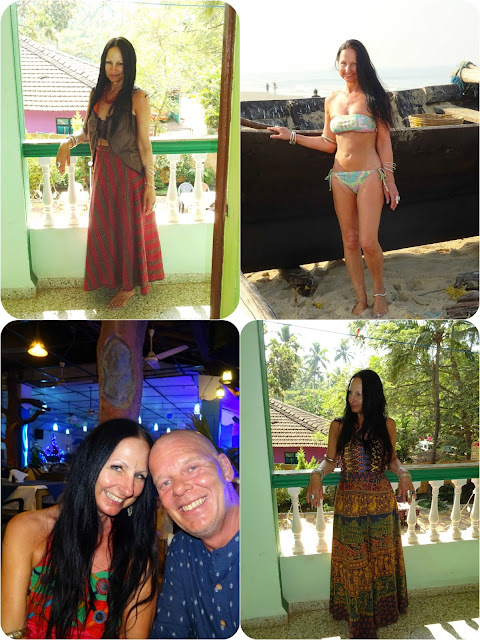 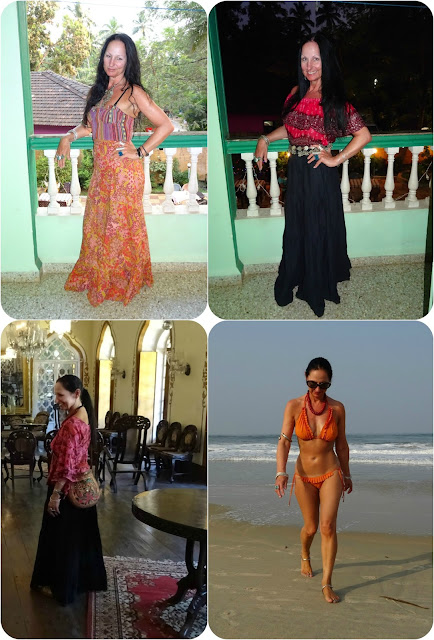 Unlike Jon, who packed his charity shop finds without trying them on first, only to get to Goa and realise his bargain shorts were two sizes too big. 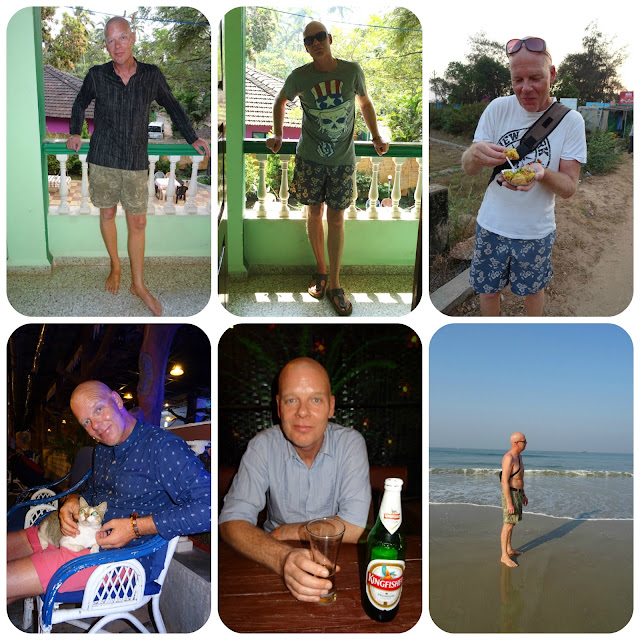 Not that they went to waste. There's one charity shop in the entire state and, as luck would have it, it's less than a hour's walk from our final destination of the trip, the village of Benaulim in South Goa. So the shorts got re-donated, we got our daily beach walk and I managed to pick up a few bargains (three glass bangles and two printing blocks.) 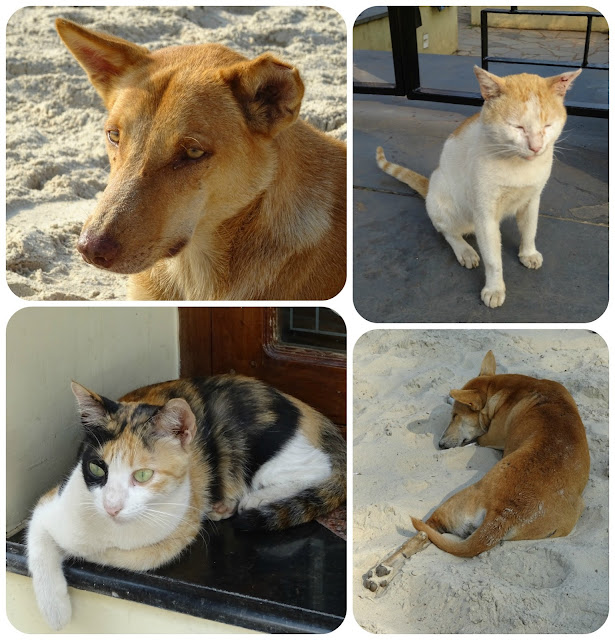 More importantly was that we did our bit for the street/beach animals of South Goa. The Goa Animal Welfare Trust (GAWT) are a wonderful charity who not only treat and neuter strays but also hold weekly immunisation & adoption clinics and run educational programmes - this week they're highlighting the dangers of littering by taking a orphaned calf , who's mother died from ingesting a plastic bag, around the local schools . If you see an animal with a chunk missing from their ear you'll know that they've been neutered by the organisation.

Although Benaulim has developed quite a lot since we first visited over a decade ago, away from the main street it still retains a traditional Goan village feel. 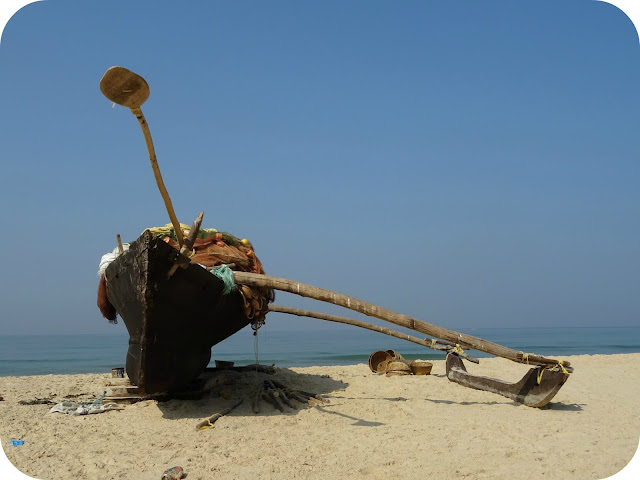 The beach is still very much a work place for the local fishermen. 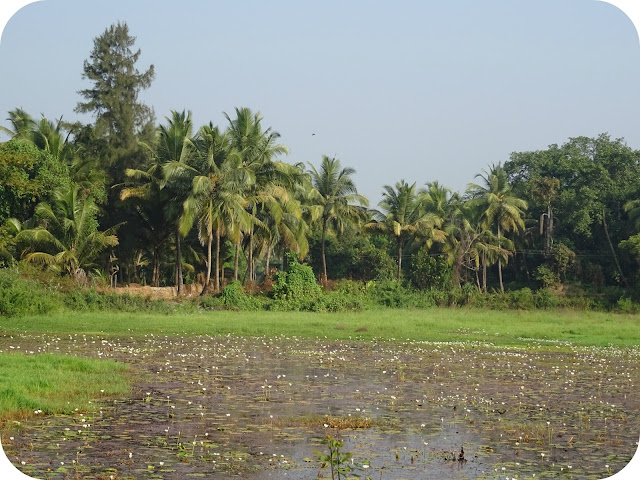 ...and water buffalo graze on the banks of the village's numerous lotus lakes. 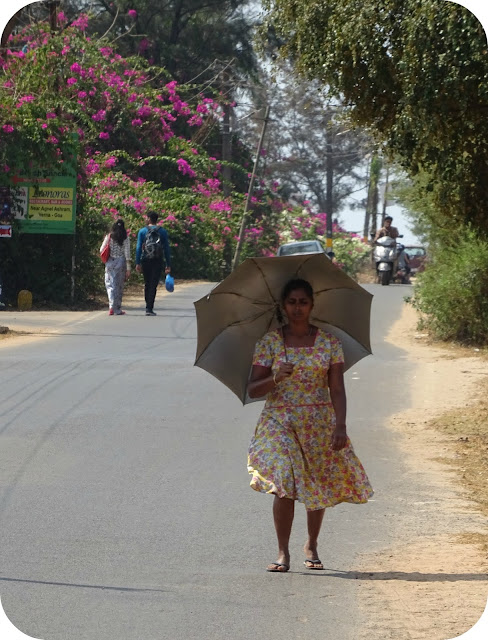 And the local women still dress in the traditional Portuguese way.

Walk past the sunbeds and shacks thronging the entrance to the beach and you've pretty much got the sand to yourself, all 25 kilometres of it. Yes, that is a bull being taken for a walk - Benaulim is the only place in all Goa where you can see the ancient sport of Kadamba (bull racing).

The area surrounding Benaulim is not only littered with old ancestral homes (which I've written about HERE, HERE, HERE and HERE) but there's also some decent museums, too. Ashok's Vintage Car World (admission £1, open daily) was a short tuk tuk ride away and, as we'd never been, thought we'd have a look.

The burgundy car in the top photo was driven by Roger Moore in The Sea Wolves. Apparently all the vehicles can be hired out - although we wouldn't recommend tackling the Goan roads unless you've got a death wish.

We stayed at Caphina, a family-run guesthouse on the main beach road. Rooms cost £6 a night. 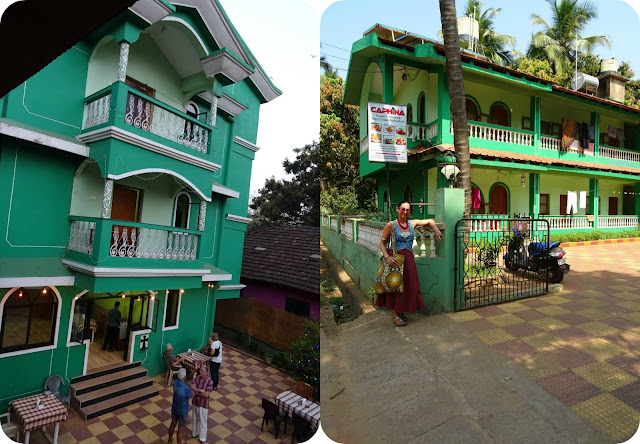 Ever wondered about the type of people we meet when we stay in rock bottom budget places...stoners, teenagers on a gap year, scruffy backpackers? You might be surprised. Our neighbours included psychiatrist Barbara, originally from upstate New York but practicing in Paris and Dr George, an eminent archaeologist with a heap of books to his name. Not everyone wants wi-fi, room service and a pool even if they can afford it. 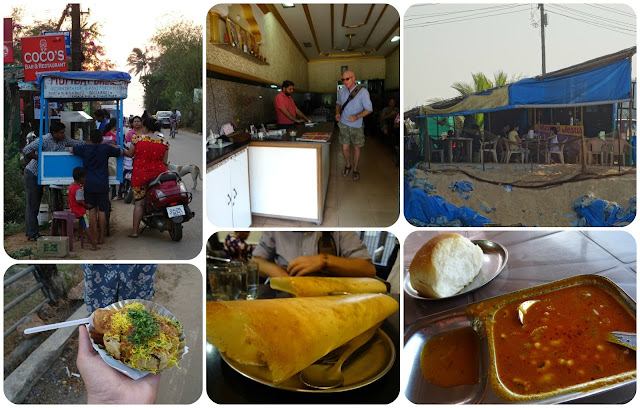 We only ever eat Indian food when we're away - pav bhaji or masala dosa for breakfast, locally grown fruit and cashews for lunch and curry & rice for dinner. Occasionally we'll indulge in our favourite sunset street snack - Mumbai-style Bhelpuri (available between 4 - 9pm) straight off a cart on the walk back to our room. 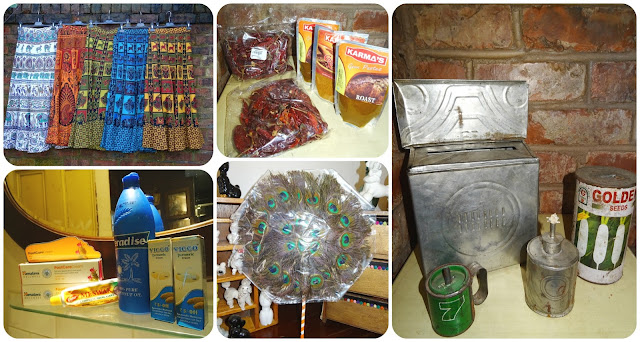 After almost twenty years we don't bother much with shopping - clothes-wise Jon bought two block printed, hand loom shirts (the black and the blue collarless shirts in the collage) and I bought five (!) block printed maxi skirts a shopkeeper friend had found for me. We stocked up on Himalaya heel balm (£1), ayurvedic licorice-flavoured tooth paste (60p), coconut body oil (£1.35) and turmeric face wash (20p) as well as dried chillies and some Goan dry spice mixes. I'd regretted not buying a peacock feather fan when I saw them in Mumbai last year so was excited to see a street hawker selling them at the bus station when we went to Margao. The tin ware is from an elderly gent with a market stall in the covered market in Margao - he recycles other people's junk into useful household goods and I'd probably buy the lot if I had a bigger bag - there's a letter box (£3.50), a money box (60p), an tiny oil can (40p) and a kerosene lamp  (50p). 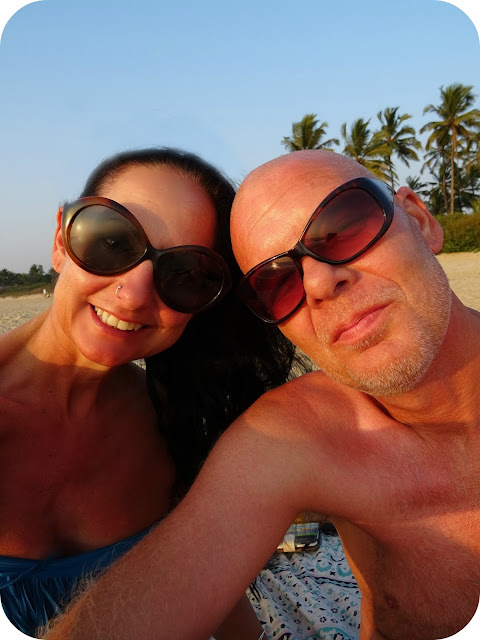 And that was India! Thanks so much for reading and for indulging me, writing about our trip helps extend the adventure that bit longer.....and makes the grim reality of a knackered internet connection (less than 2 hours access in the last 72 - how's a woman supposed to run a website?!) and the crap weather a whole lot more bearable.

Normal service of charity shop finds, outfits and the usual chit chat should be resumed next week (depending on whether Talk Talk get their arses in gear). See you soon!

More photos can be seen HERE.
Posted by Vix at Thursday, February 23, 2017