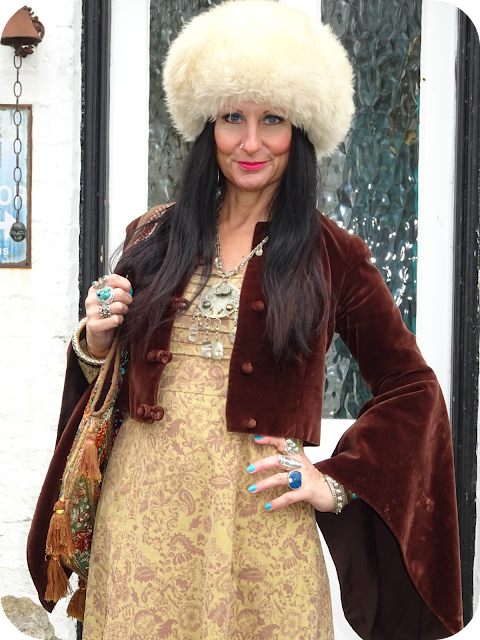 Even though we'd only planned it a fortnight ago, yesterday took an age to arrive and I was beyond excited when the alarm went off. 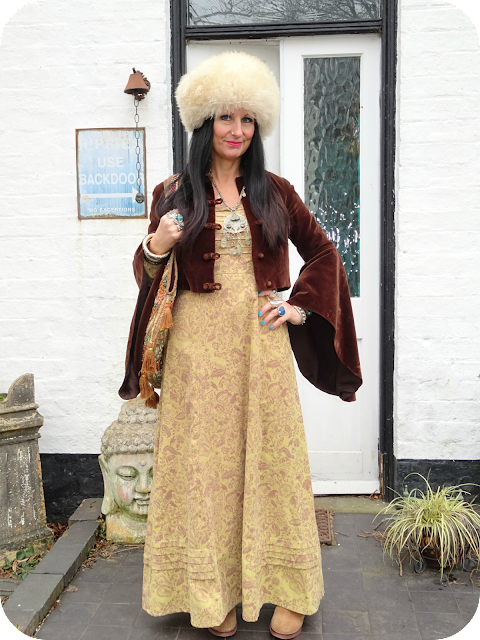 I wore a 1970s corduroy maxi dress by the Dove Clothing Company (bought from Vintage Village on Sunday), an insane sleeved vintage velvet jacket and massive sheepskin hat over full-on thermal undies. The taste we had of Spring last weekend was but a dim and distant memory but at least the sun was shining. 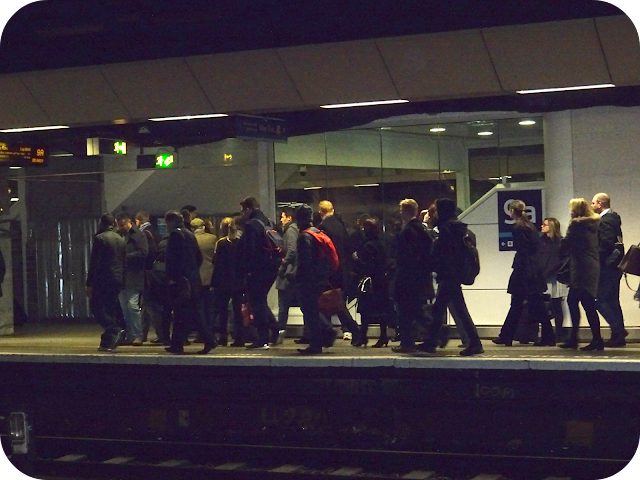 After taking the train from Walsall to Birmingham I stood at New Street Station waiting for my connection and rejoiced in the fact that I'm no longer one of these drably clad workers on the crushing daily commute. 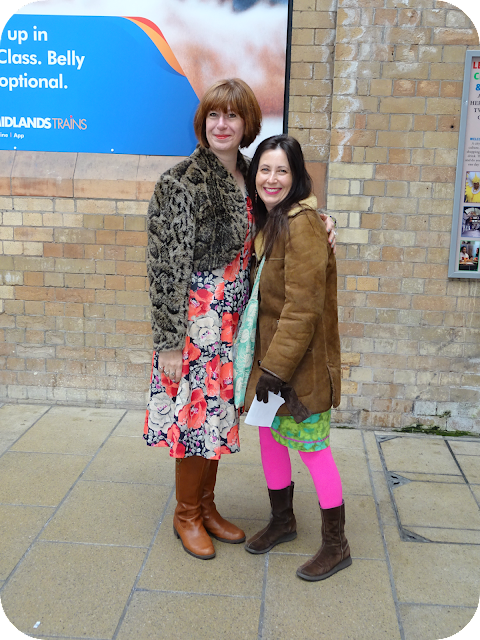 Less than an hour later I reached the East Midlands city of Leicester and within minutes these two fabulous women, Curtise and Tania, had joined me. 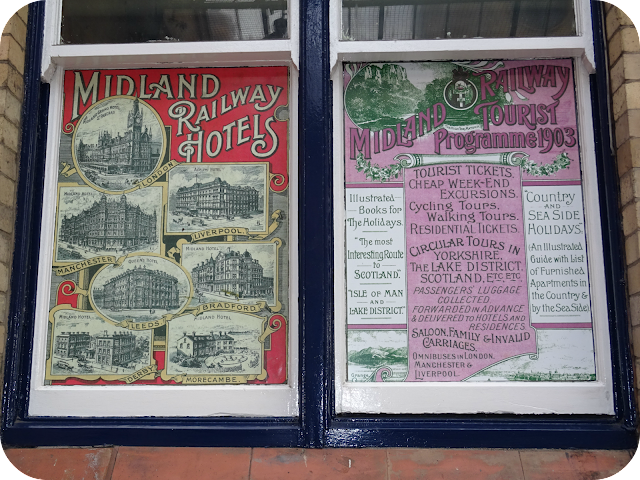 Despite it being less than 50 miles up the road I hadn't visited Leicester since the 1980s when, 30-odd years ago, it was the place to go for vintage Levis imported from the US. Back then I'd catch a coach with some girlfriends, buy the jeans I wanted (usually the grubbiest and most oil-stained) and spend the rest of the day in Yates' Wine Lodge drinking Strongbow Cider before taking the coach back home. 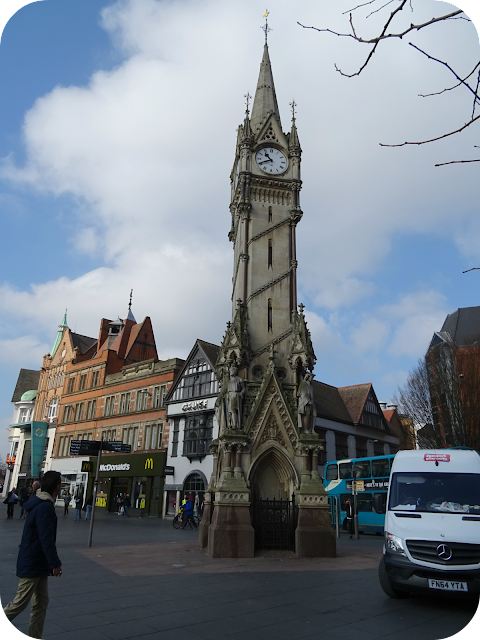 I had no idea how attractive the city was. 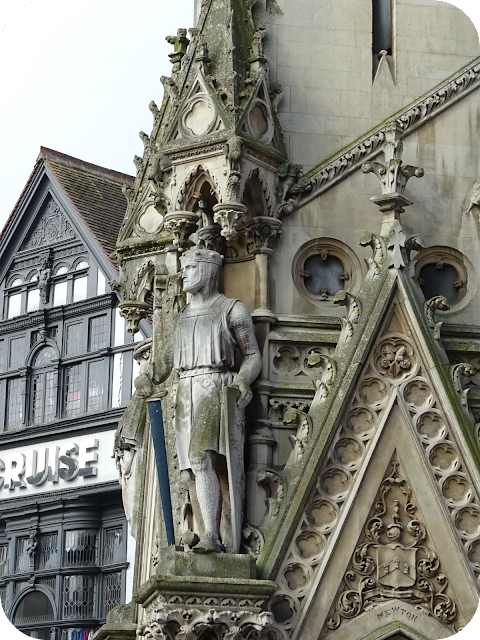 Leicester is stuffed with fascinating buildings. 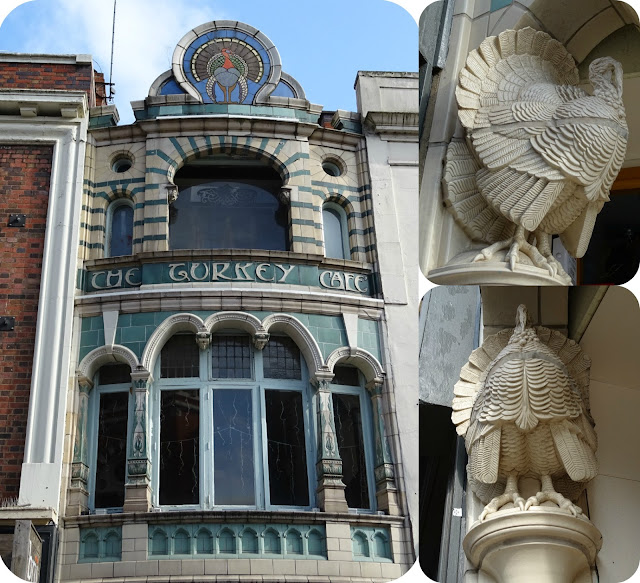 With loads of interesting architectural details. 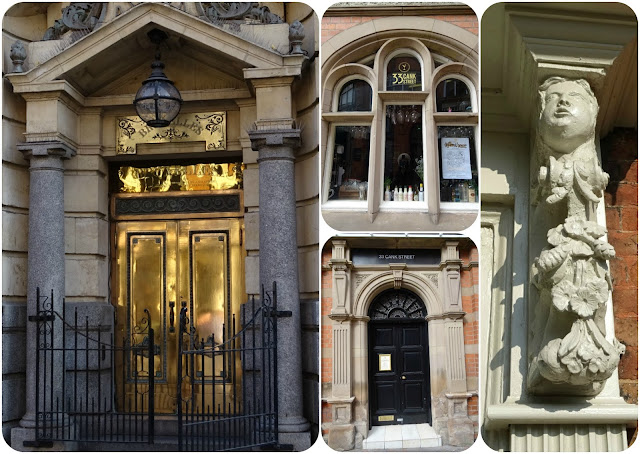 Between charity shops we drooled over imposing doorways, ornate pillars, opulent tiles and gorgeous moldings dating from Medieval to Mid-Century. 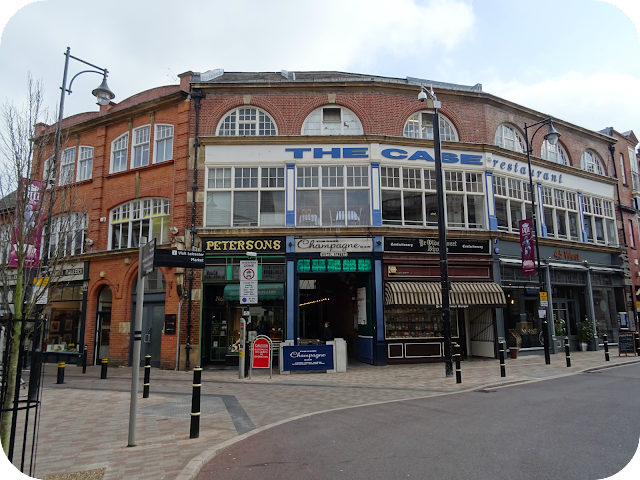 Leicester offered a vast array of Champagne bars but being classy chicks we held out for Wetherspoons. 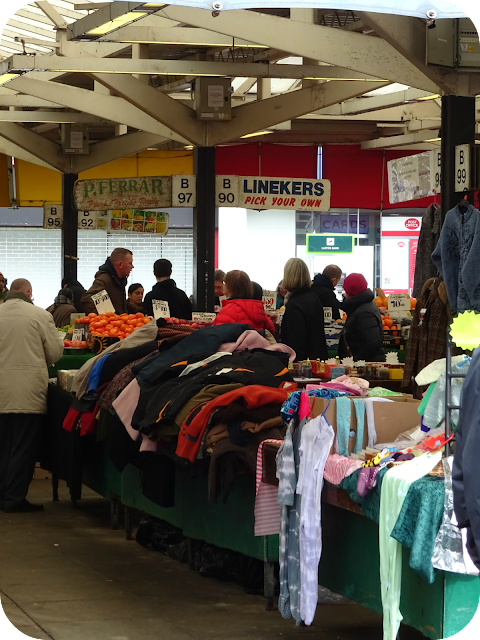 We paid homage to the city's most famous son, soccer god Gary Linekar, and photographed the family fruit and veg stall. 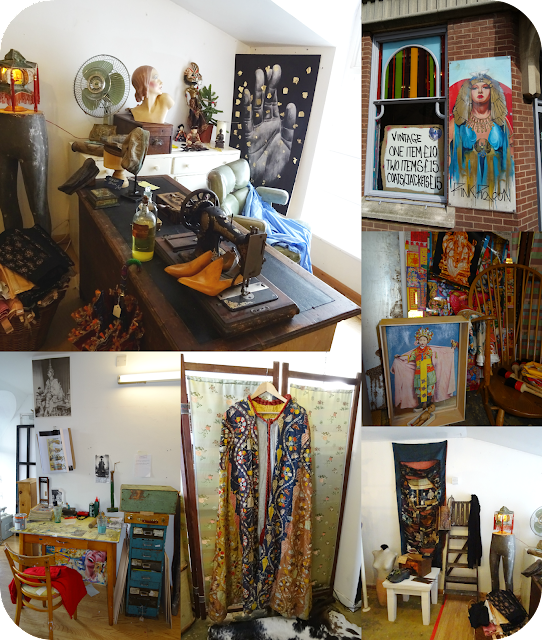 We spent at least an hour in the wonderful Dollymix Vintage, a gorgeously decorated shop with rooms filled with the most glorious clothing. My favourite section contained 1960s & 1970s ethnic dresses, velvet jackets and bejeweled waistcoats. I almost died when I spotted this 19th Century Indian cloak (but didn't dare ask the price). 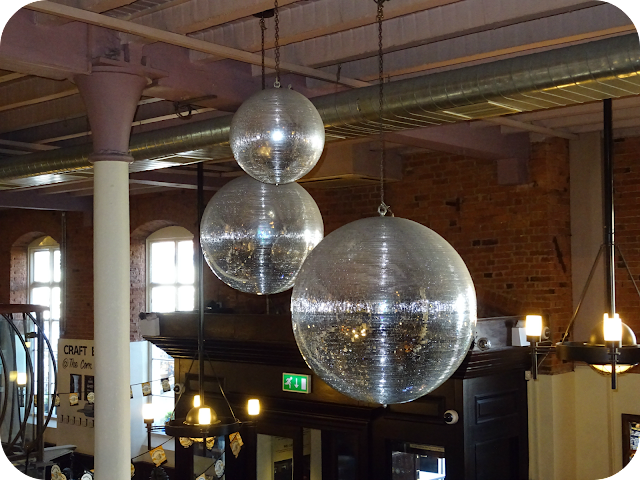 There are three Wetherspoons in Leicester city centre and we chose to eat lunch in the biggest and most beautiful, The Corn Exchange, a Grade II listed building built in 1850. 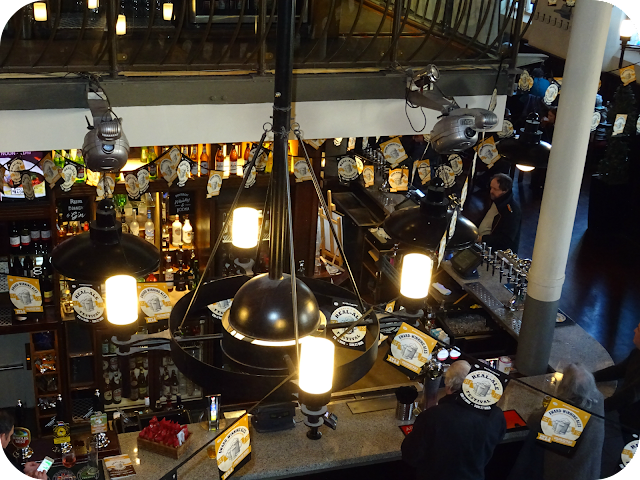 As is now tradition we ordered Mexican gourmet vegeburgers with salsa, onion rings and chunky chips. 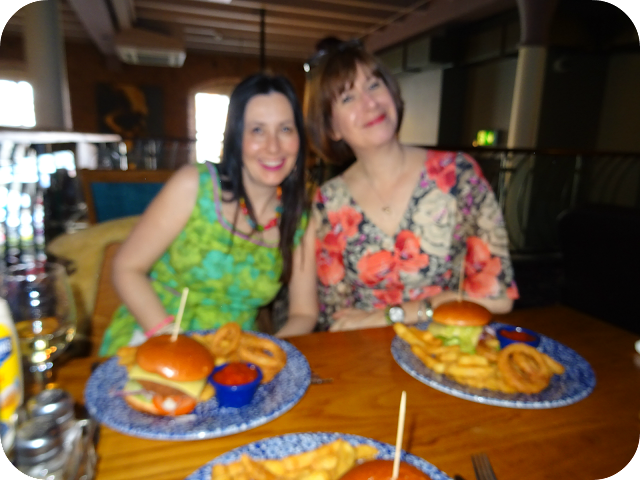 I wasn't pissed, I'd just forgotten to put the flash on. 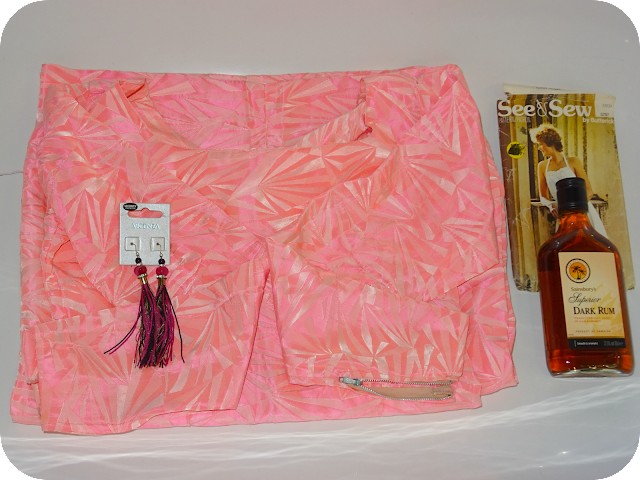 Gifts were exchanged. A Barbie pink 1960s maxi and tasseled earrings from Curtise and a groovy 1970s sundress pattern and a bottle of rum (that won't last long) from Tania. 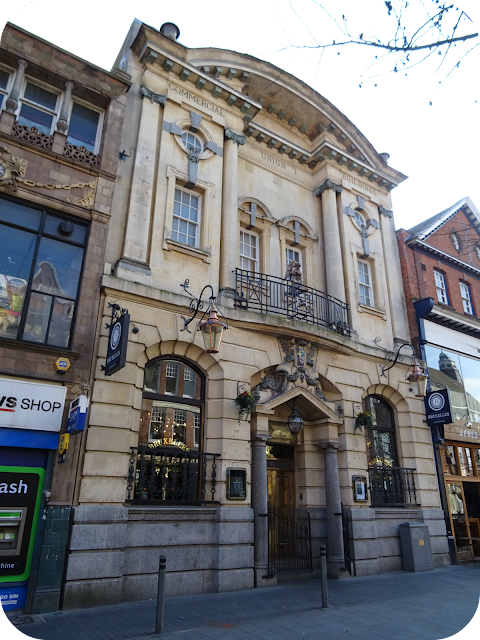 With the exception of ludicrously optimistic Sue Ryder Vintage which had a 1970s coat priced at £110 and a badly stained Crimplene dress for £20 which, according to the label was priced due to condition (it was fit for the bin) the charity shops were great, well laid out, affordable with a good variety of interesting stock. 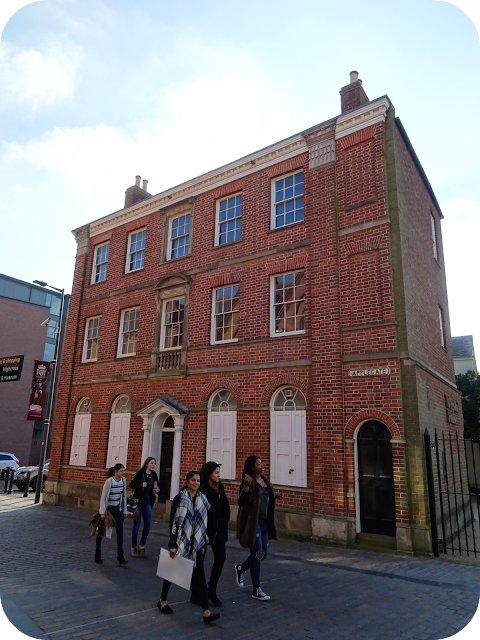 Shops fully investigated we thought we'd take in a bit of culture and visited the cathedral, which dates back to Norman times. 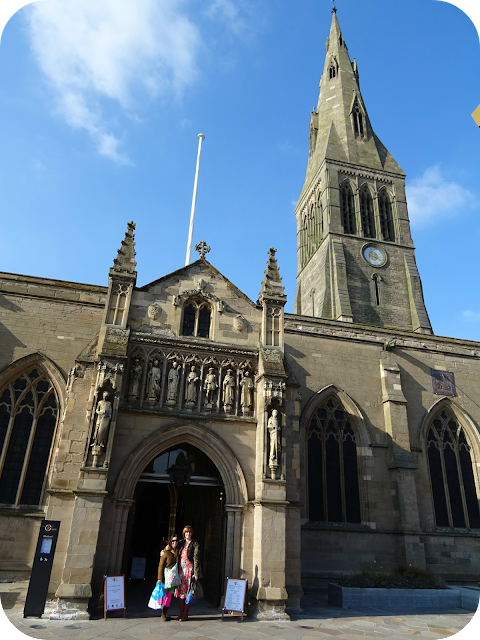 We visited Richard III's tomb, pondered over some interesting memorial stones one of which referred to a the subject "Mouldering here along with his ancestors", charming! 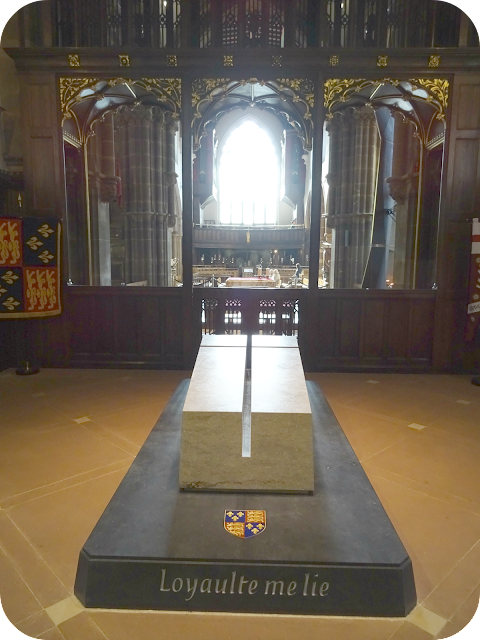 The volunteer guides were welcoming and friendly, much like everyone else we met in Leicester. There were quite a few strange folk and several of them seemed to think they knew me. Nothing new there. 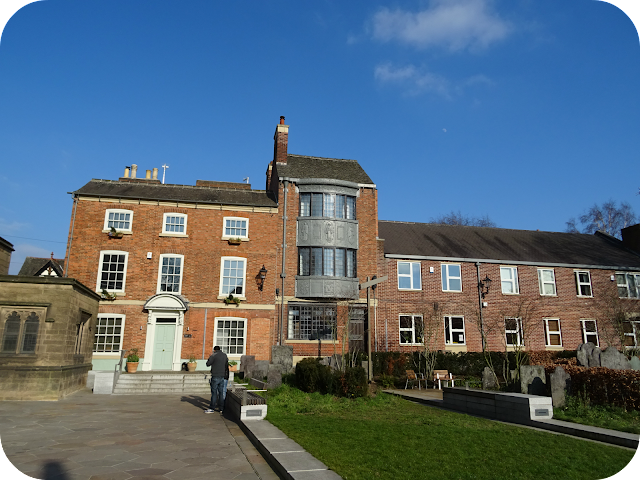 After a bottle of house Chardonnay in The Last Plantagenet (another Wetherspoons) we walked back to the station. Tania's train was already in so after waving her off Curtise and I attempted the usual crap train station selfie before heading home. 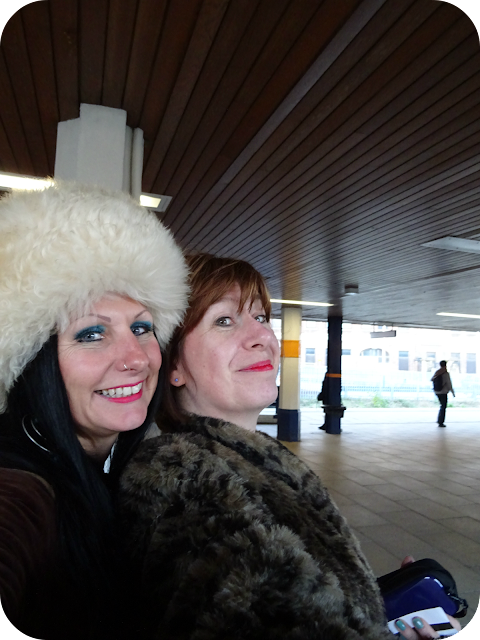 What did I buy? 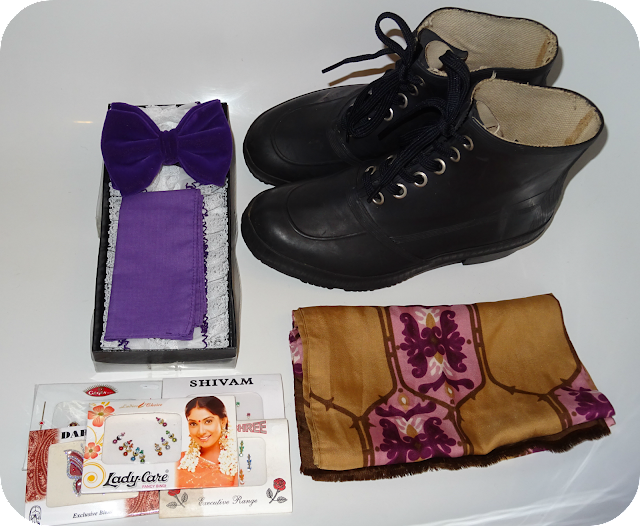 A boxed jabot, velvet bow tie and pocket square from the 1970s, some bindis, a 1960s fringed scarf and a pair of Mid-century Soviet workers boots. A mix of eras, cultures and rather surprising, sums up Leicester perfectly.

We're trading in Clapham with Judy's this Sunday (details HERE). We've got tomorrow off so we're going to the pub in a bit.

Updated to link to The Style Crone's Hat Attack.