Outfit of The Day - Tribal Gypsy Meets the '70s 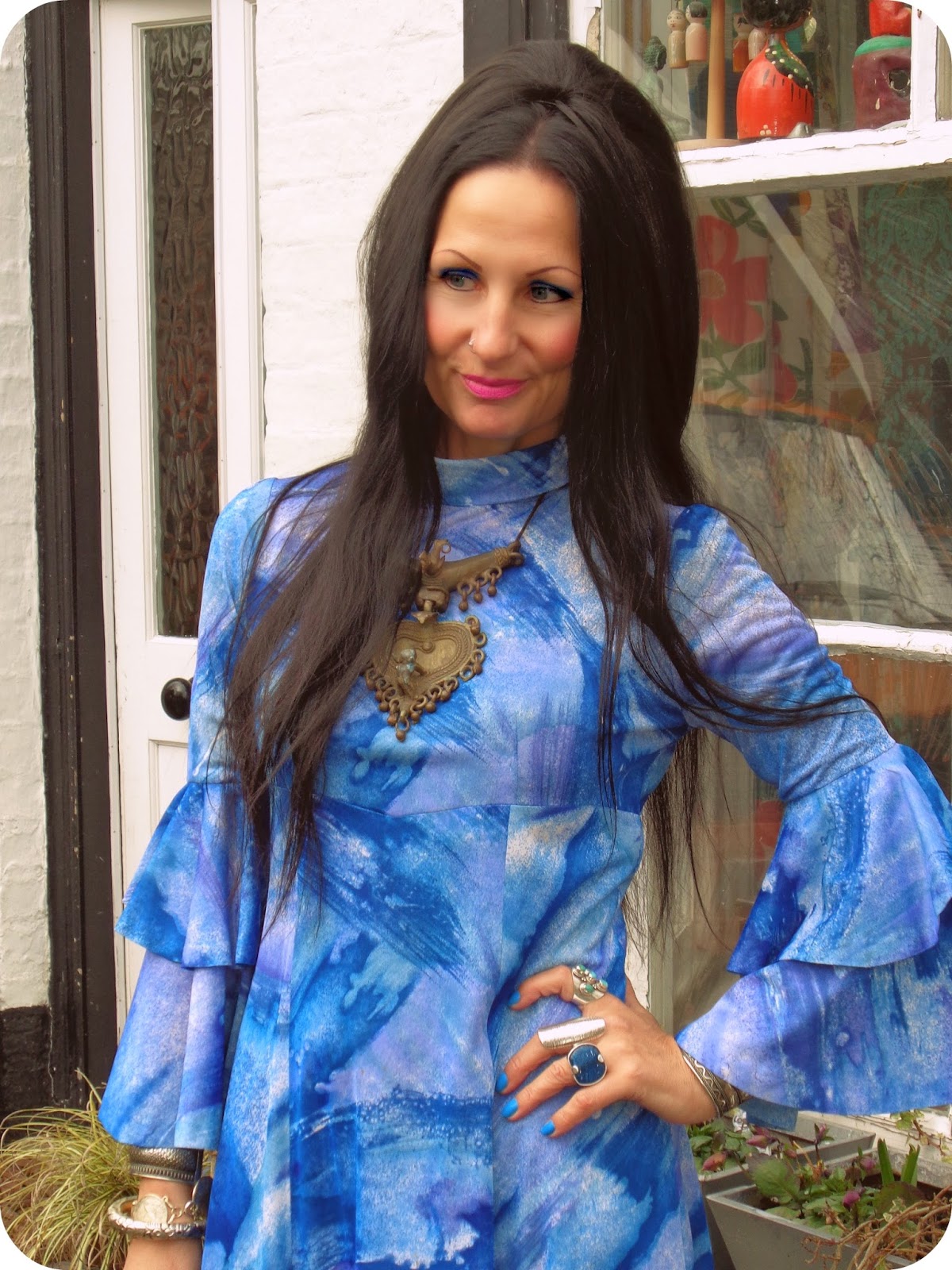 The more observant of readers will have seen this dress feature plenty of times on my blog over the past five years. 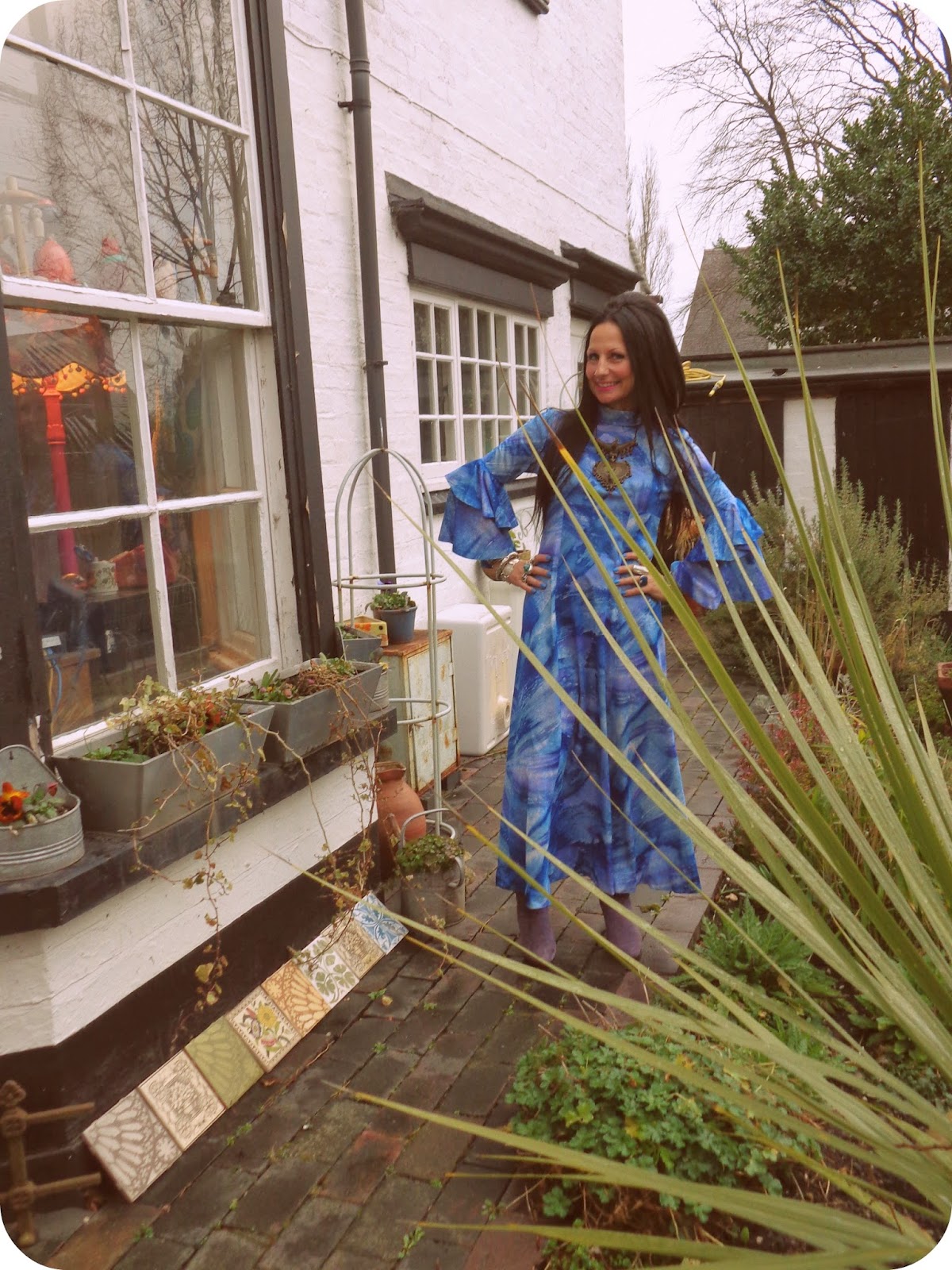 Being a die-hard vintage chick I wear my clothes again and again and again. I'm not remotely swayed by fashion, trends or the colour of the year, I'm happy with my style and have no reason to change even though it might not make for the most thrilling of blog reads.


Given the choice between more clothes and new jewellery & I'll choose jewellery every time. Even when I'm naked I've always got several rings on my fingers, one through my nose & another in my belly button. 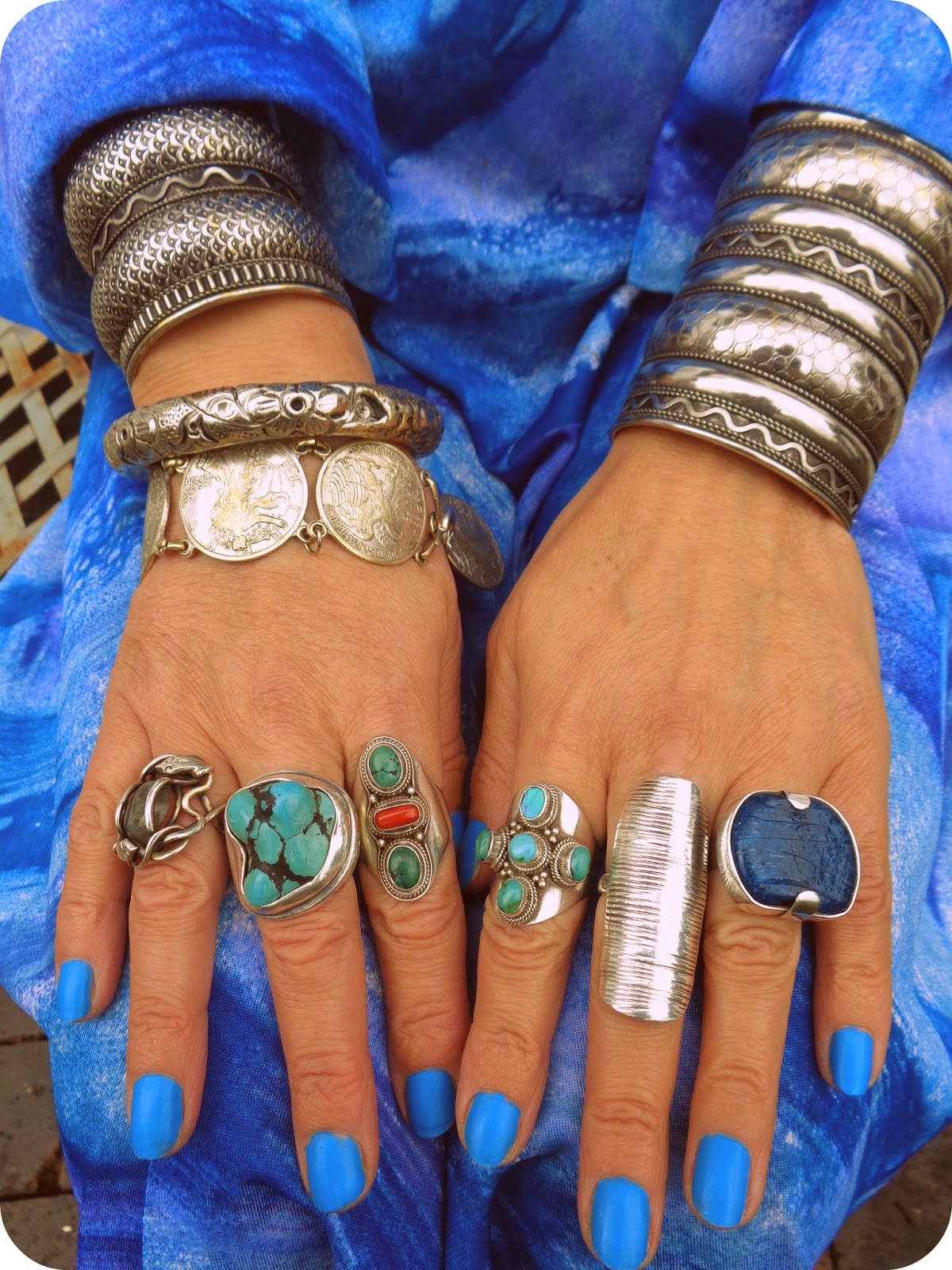 It isn't jewellery, its armour against mediocrity.

Mention vintage jewellery to most people and they'll talk of blingy brooches and engraved lockets. Ever the weirdo, here's some of mine. 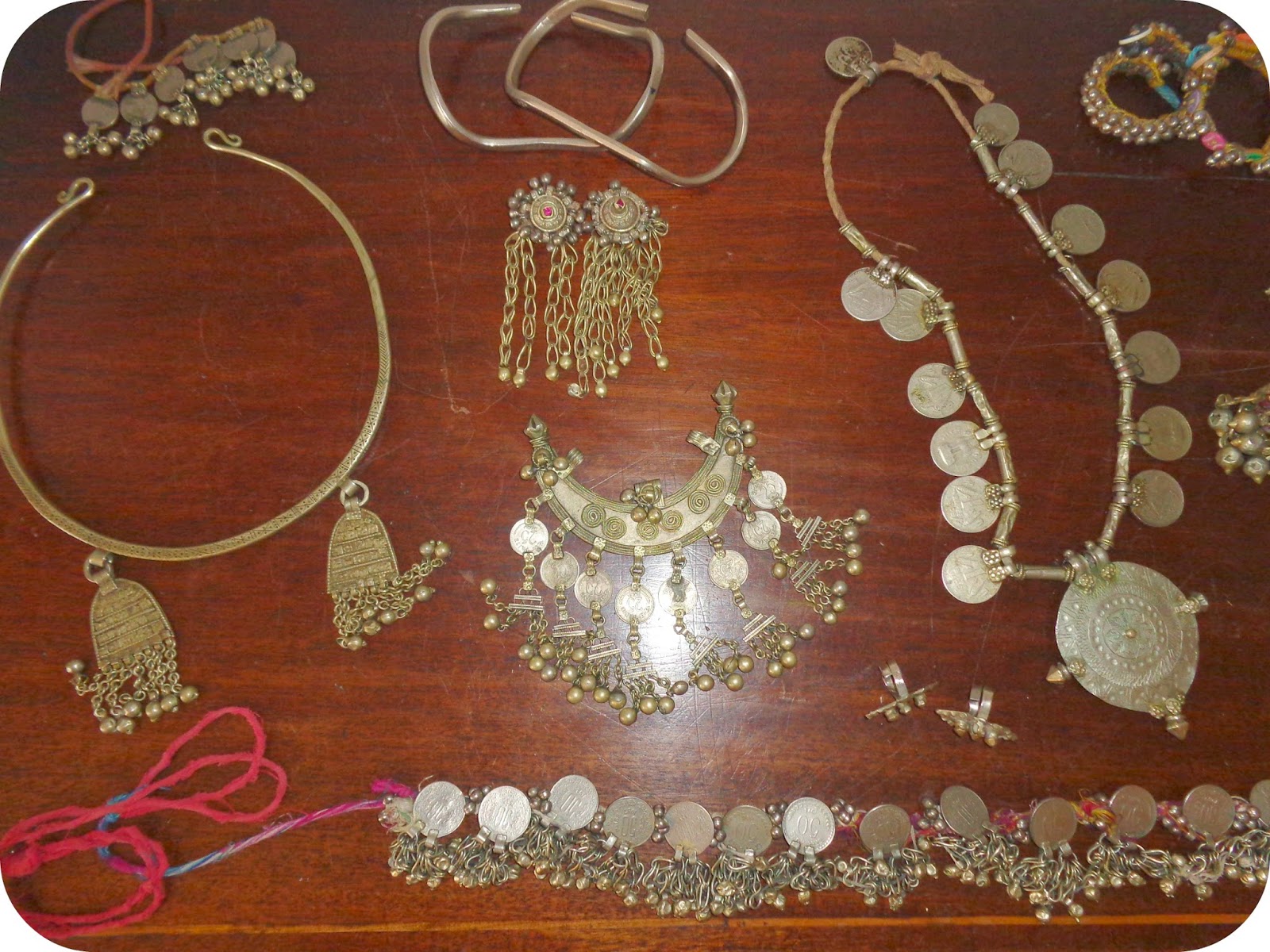 To the uninitiated the metal torque in the top left hand corner could be dismissed as tat when in fact it's a rare tribal piece from Karnataka dating from the late 19th century. While our European Great-grandmothers were wearing cameos, a wild gypsy woman was rocking the hell out of this. The coin belt (with the red thread), is from Gujarat and designed as a show of wealth. Of the coins featured, one dates from 1947 when George V1 was still King Emperor of India. 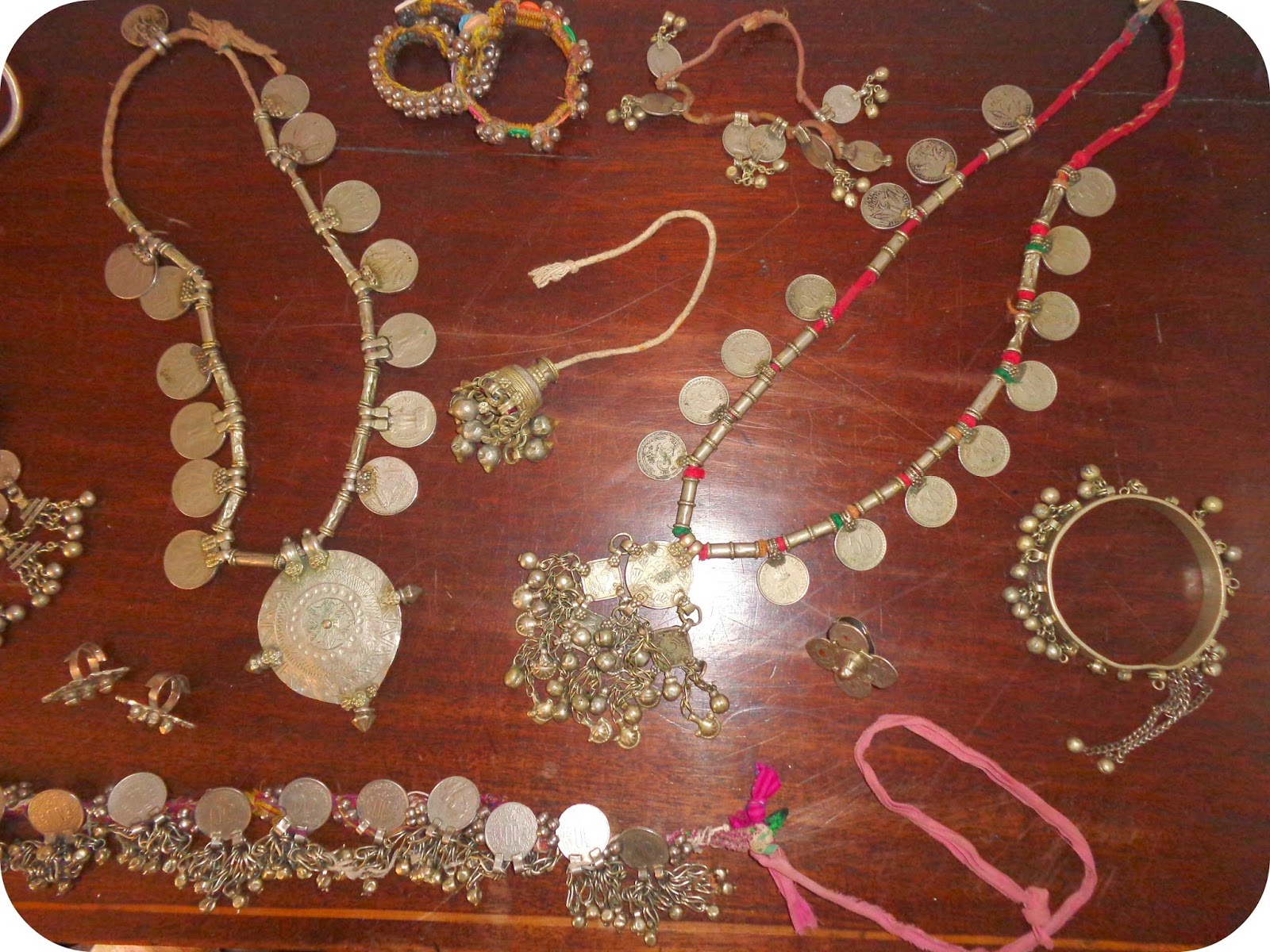 In a collection built up after 25 visits to India I've accumulated bejewelled hair clips, Rajasthani toe rings, bangles made from scrap metal & Bakelite buttons and anklets threaded with obsolete currency. Nothing cost me more than a tenner and many command mentally high prices on the internet, not that I'd ever dream of selling. Each and every piece brings back memories of good natured haggling in sweaty markets throughout the sub-continent.

This is Laxmi, my Lamani friend in South Goa, I bought some of her family pieces (and her blouse!) 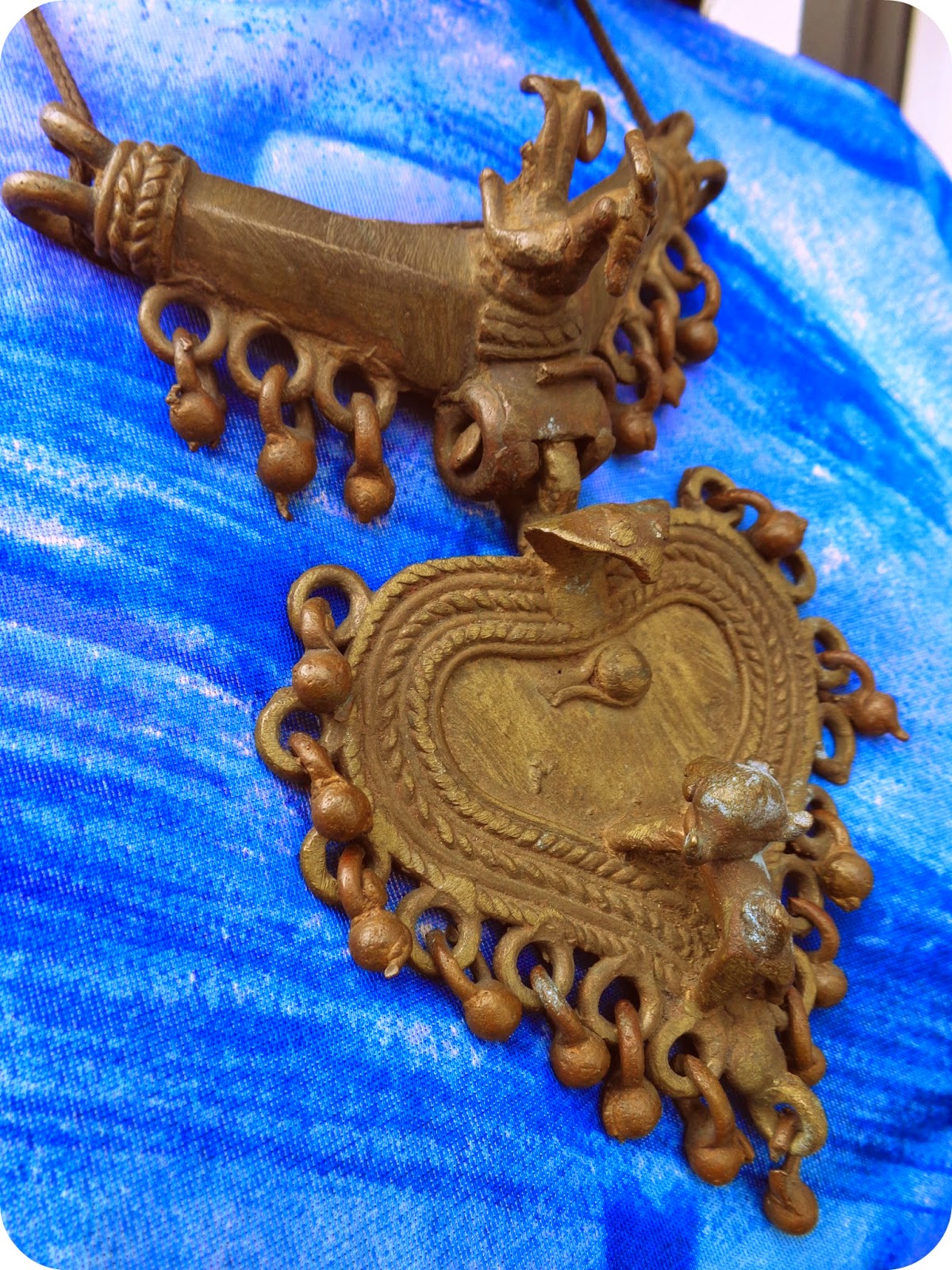 I spotted this 19th Century tribal neck piece on the stall next to us at the vintage market we worked in Bristol at the weekend. It turned out that the stall holder was as obsessed by India as we were and we spent a happy afternoon chatting about the places we'd visited and the joy we still feel each time we visit. At £8, trimmed with bells and featuring a peacock, a bull and cobra I just had to have it.

I could write about how you couldn't get a "statement" necklace from the high street for less than £8 and how feeble a statement you'd be making by wearing a mass produced item owned by at least half the female population of your home town but I've been in Wetherspoons all afternoon and the £1.80 double measures of Pinot Grigio have rendered me incapable so I'm off for a lie-down on the settee and eat crisps instead.