Our House in Your Home 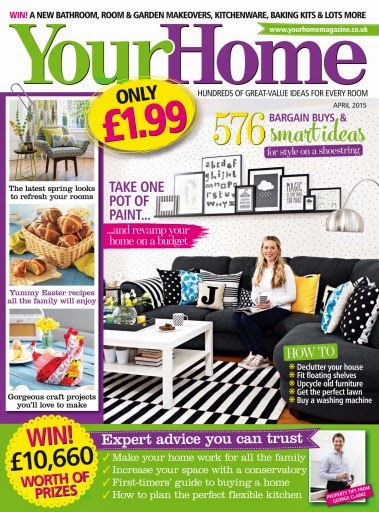 April's Your Home magazine is out and we're in it! 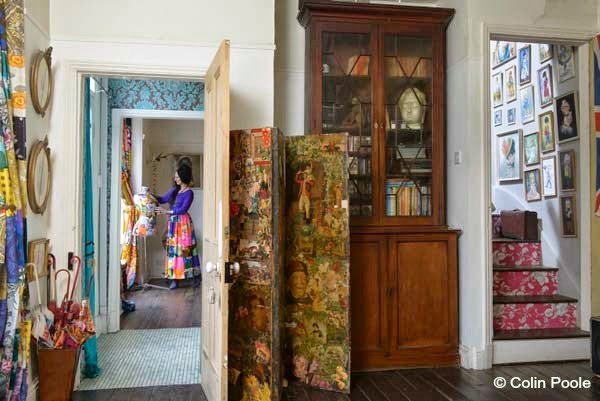 It seems almost unbelievable to have our house featured in a best-selling interiors magazine. I'm sure it was only five minutes ago that I was living in the front room of a condemned Victorian terrace, paying £11 a week rent to share a cockroach infested house, accessed by a cobbled back alley frequented by prostitutes and littered with used condoms. Back then I kept my clothes in a council grit bin and covered the damp patches on the walls with nightclub fliers. 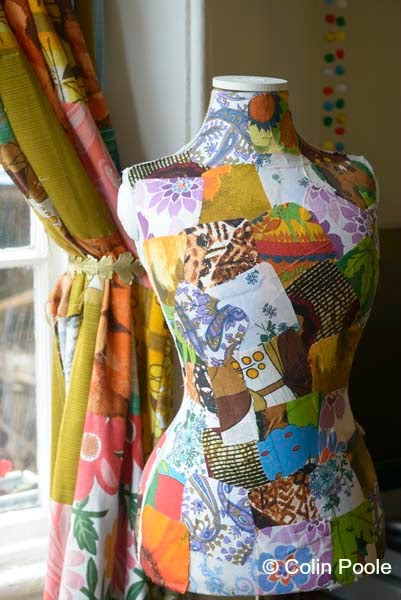 In the thirty years since I left my parents' house I've scrimped and made do to be able to afford my own home. I've spent months living on value biscuits & sliced bread and done without a fridge, a TV, central heating or a washing machine. Boarded up windows, leaking roofs, dry rot, mould and rats, I've seen it all but, even as a scatty teenager, I never missed a rent payment or paid a bill late. I've shared houses with an undertaker, a tribal princess from Senegal, a life model and a ukulele playing crusty and even come back from work early to discover one (male) house mate lounging on my bed dressed in my underwear. 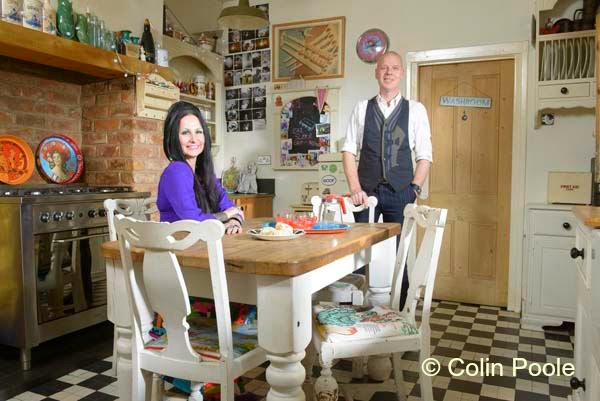 The first property I bought was a compromise, a modern semi in the town's red light district, but it was within my budget and I could afford to travel, have a social life and still keep up the mortgage payments.  I lived alone for years, attracting the attention of the local pimps who, with property and without a man in my life, assumed I was a high-class tart. 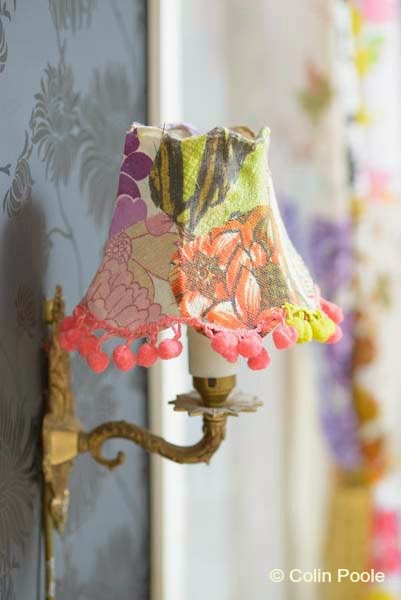 In 1992 Jon came along and rescued me from a life of notoriety. After eight years of living in separate homes we rented out my place (as house prices were at an all-time low) and I moved into his Victorian terrace on the other side of town. It was the house I'd always wanted to live in, packed with original features, high ceilings, an attic and a cellar and a long, rambling garden. He was a struggling musician, the house was an ongoing project but, as a high-flying wage earner, I was able to afford to get the work finished. A couple of years down the line property prices picked up and we sold my house, but only after Jon had completely refurbished and redecorated it following a horrendous trashing by the previous tenants. 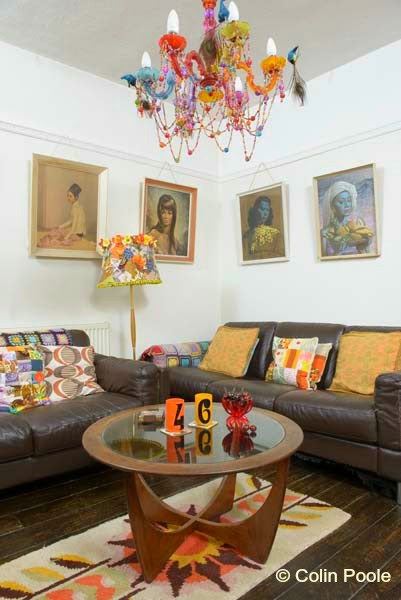 My Grandma had Alzheimer's and had moved into a nursing home in 2000. As her care costs were cripplingly expensive my Mum suggested Jon & I buy her house to help release some much-needed funds. As both of us loved Stonecroft, her home, we decided to put our place on the market and spend the time gradually doing Grandma's house up as, having stood empty for some years, it was starting to deteriorate. We didn't plan on selling our house to a cash buyer within an hour of it going up for sale. We had a month to pack up and move out and spent the next year living in one room while the house resembled a building site. 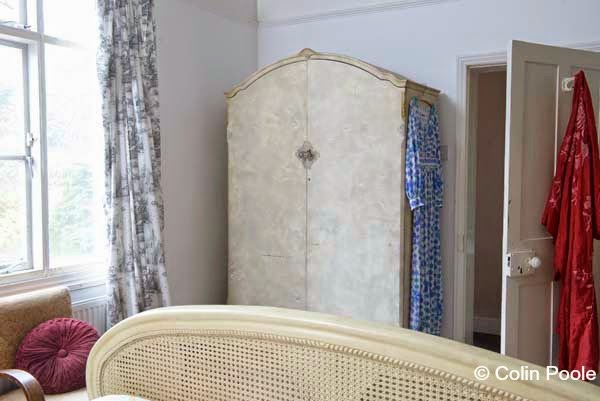 Living in a Georgian house means a never-ending list of repairs. The roof needs replacing, the sash windows are rotten, the doors are wonky and the floorboards creak but, when there's money spare, we go to India instead. Stonecroft's stood for 250 years, I'm sure a few more years of neglect won't matter. 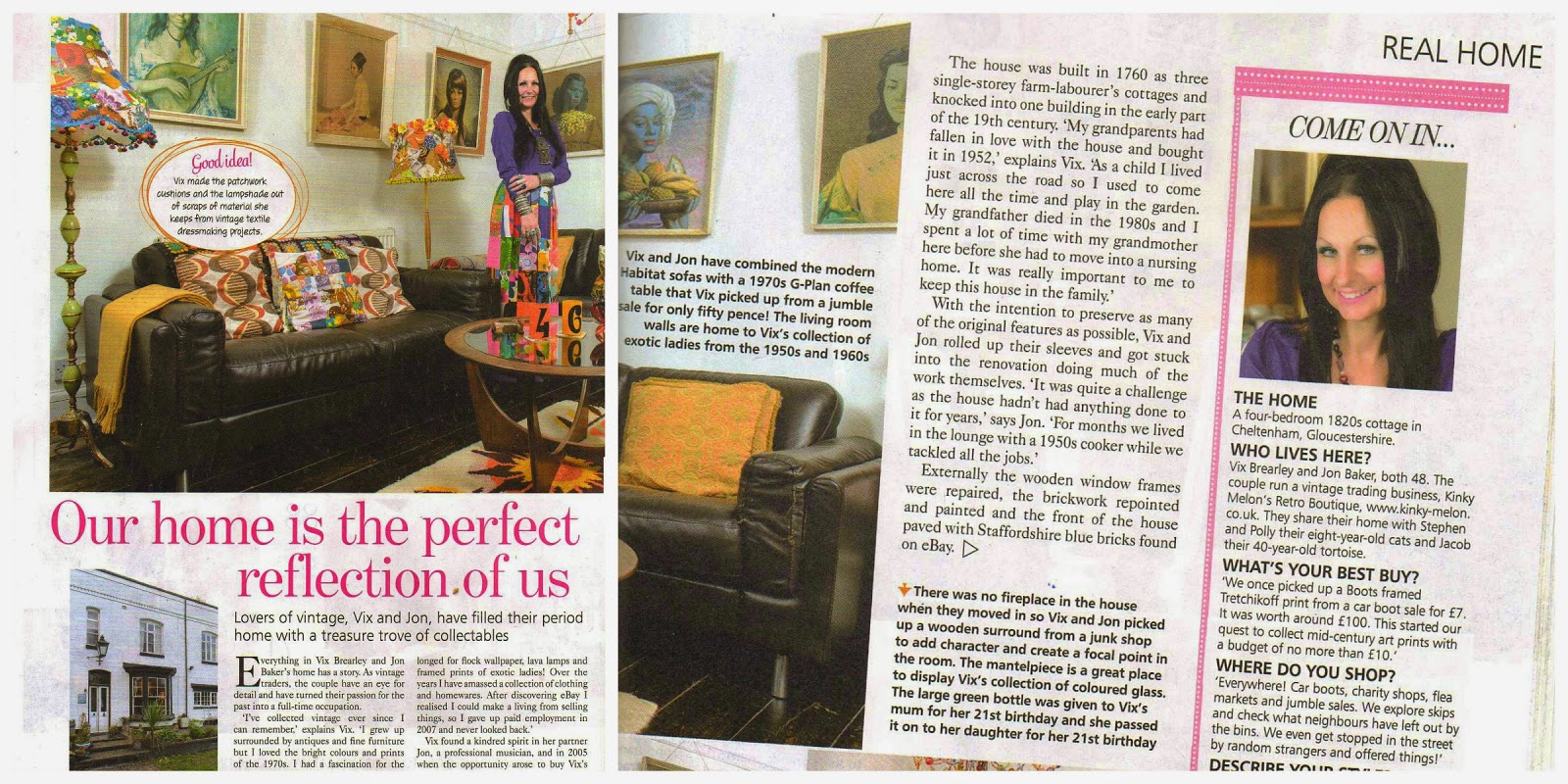 So here's the article - a six page spread, no less. It's a shame they cropped Jon out of the photos and moved our house sixty miles south from Walsall to Cheltenham! According to the editorial we've got four bedrooms (as opposed to two) and the house is 60 years younger than it should be. The good ol' British press, eh? 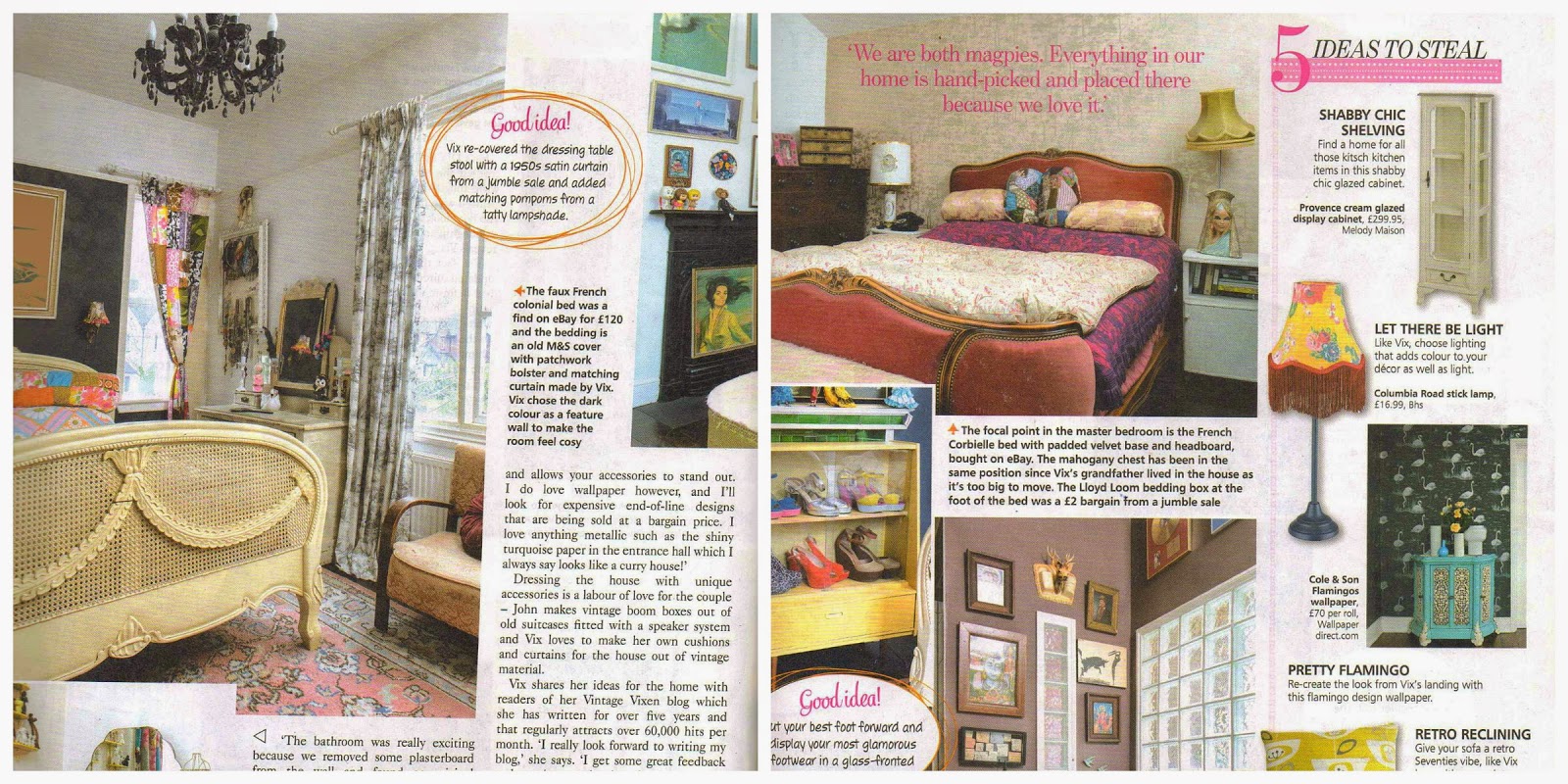 It makes me laugh that the magazine suggests that to get a vintage look like ours readers should shop at Ikea & BHS. That's like me suggesting you shop at H&M and Primark for my style of clothes. Still, I'm still very flattered and excited to be in print and the photos and interview are fab. 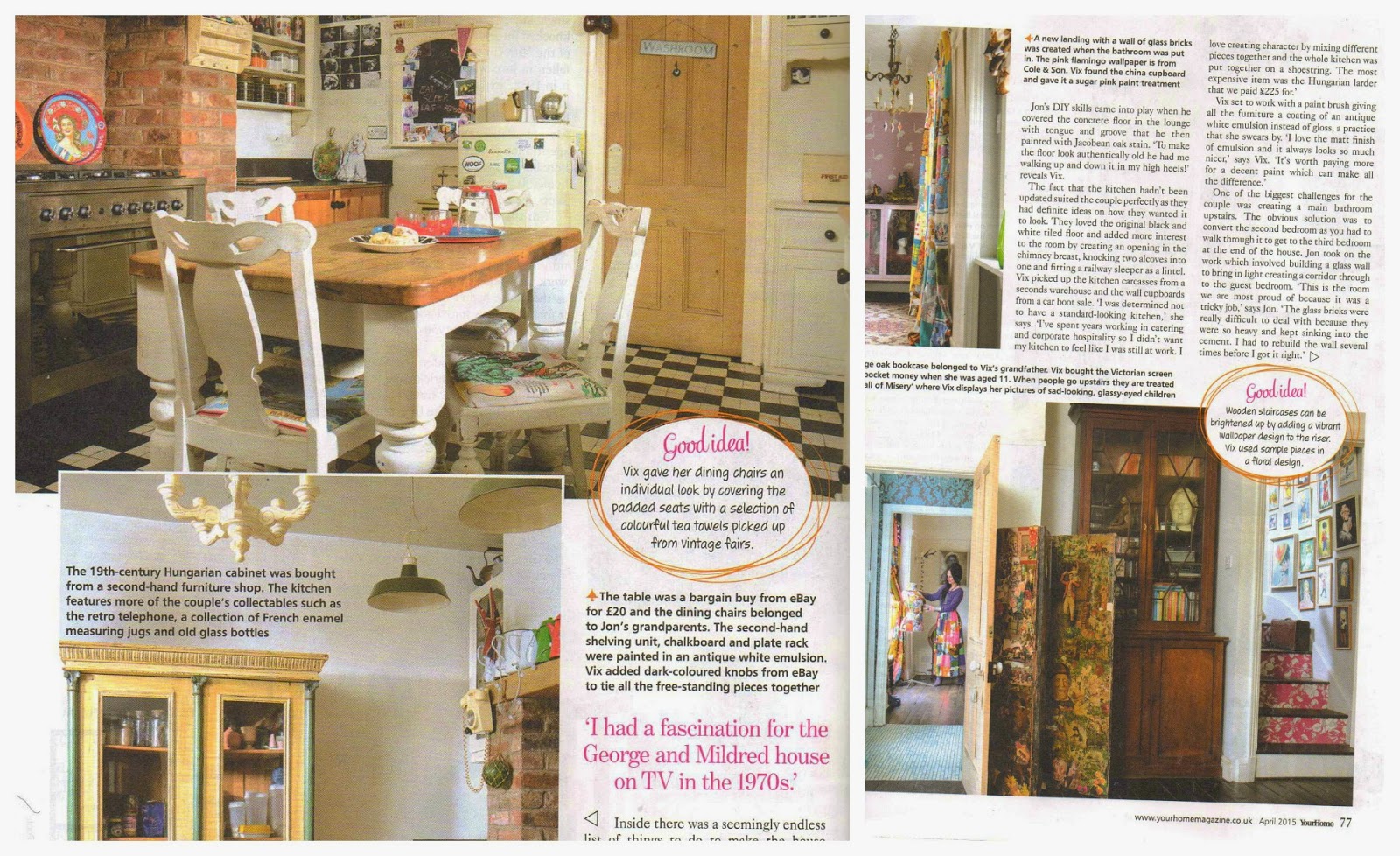 Your Home is available at most UK newsagents or you can download this month's copy for £1.45 HERE.

Talking of interviews do check out Van's feature on me & Kinky Melon, HERE.
Posted by Vix at Wednesday, March 11, 2015