Sew What? Curtain Couture, The 2014 Edition 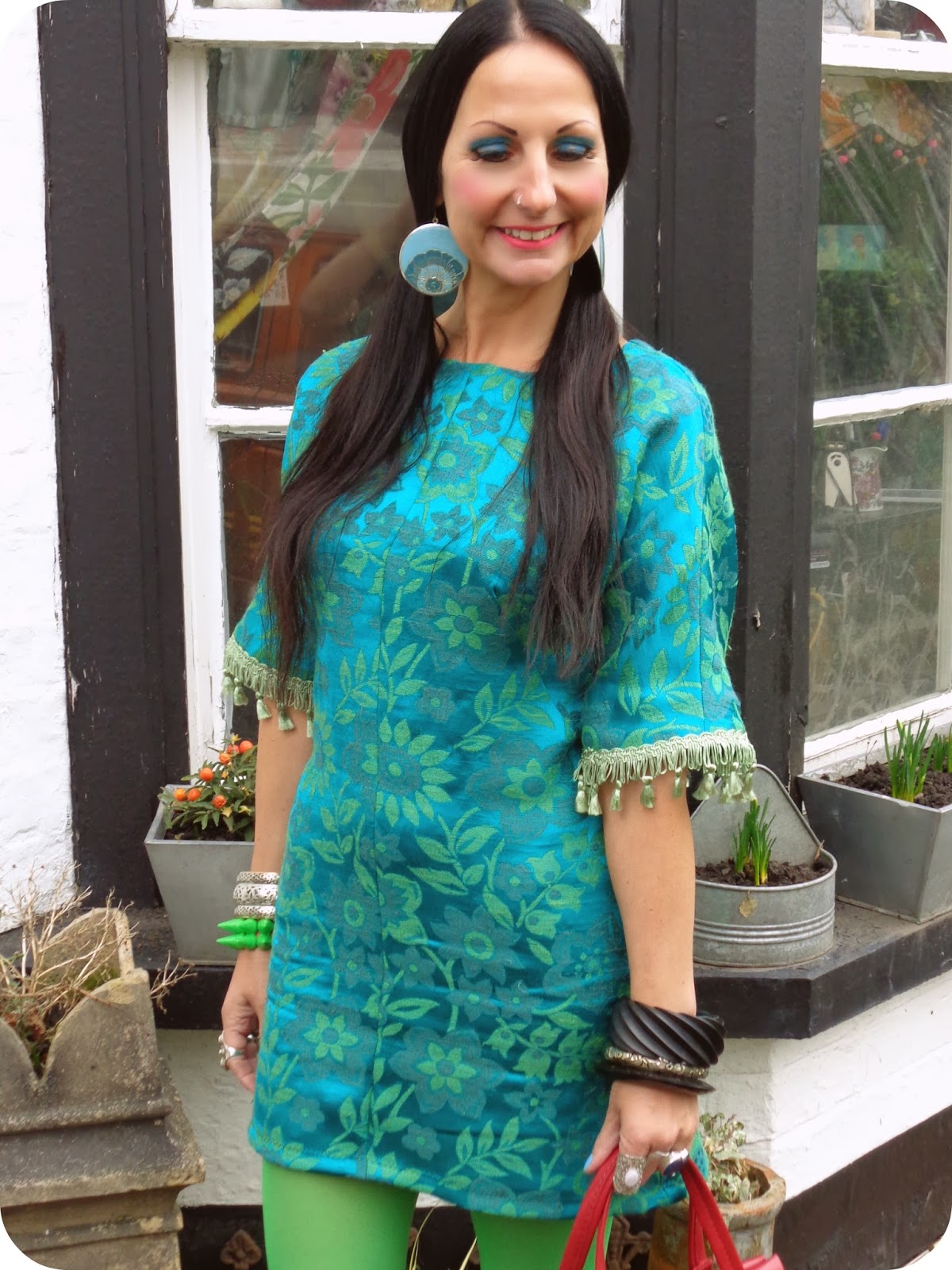 Other than tackling the endless pile of mending in the stockroom, I've done no sewing this year. Rather than slob on the settee with a family pack of Lidl Pretzels and a re-run of The Voice (Ricky Wilson is such a distraction), I spent yesterday afternoon doing one of the things I love most, making myself something wearable from stuff salvaged from around the house.

This go-go dress was the result. 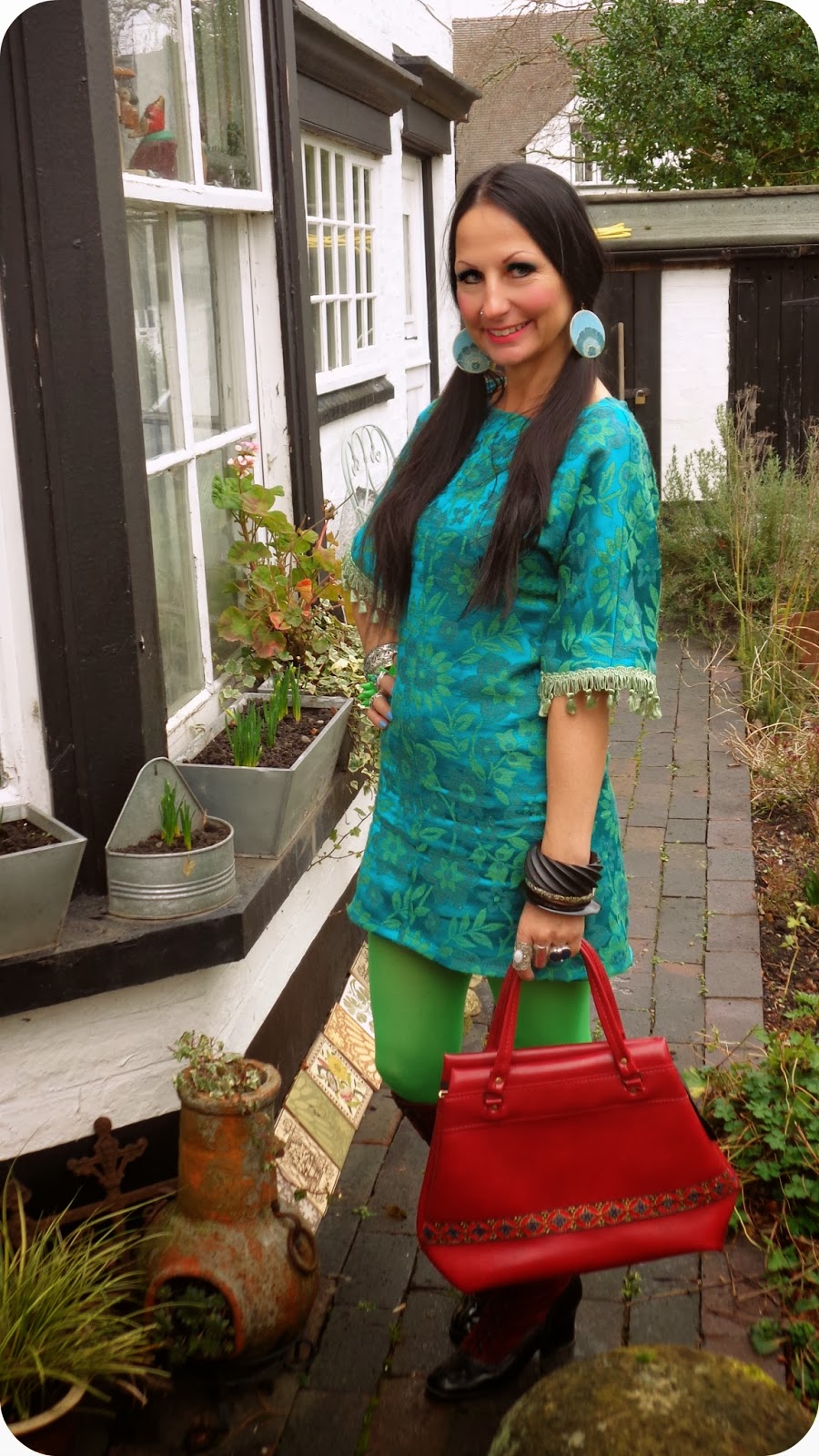 Made from a 1967 Jiffy "teenage" pattern (courtesy of Queen Helga), vintage curtain bought for pennies at a jumble sale and upholstery braid ripped off a naff old lampshade. 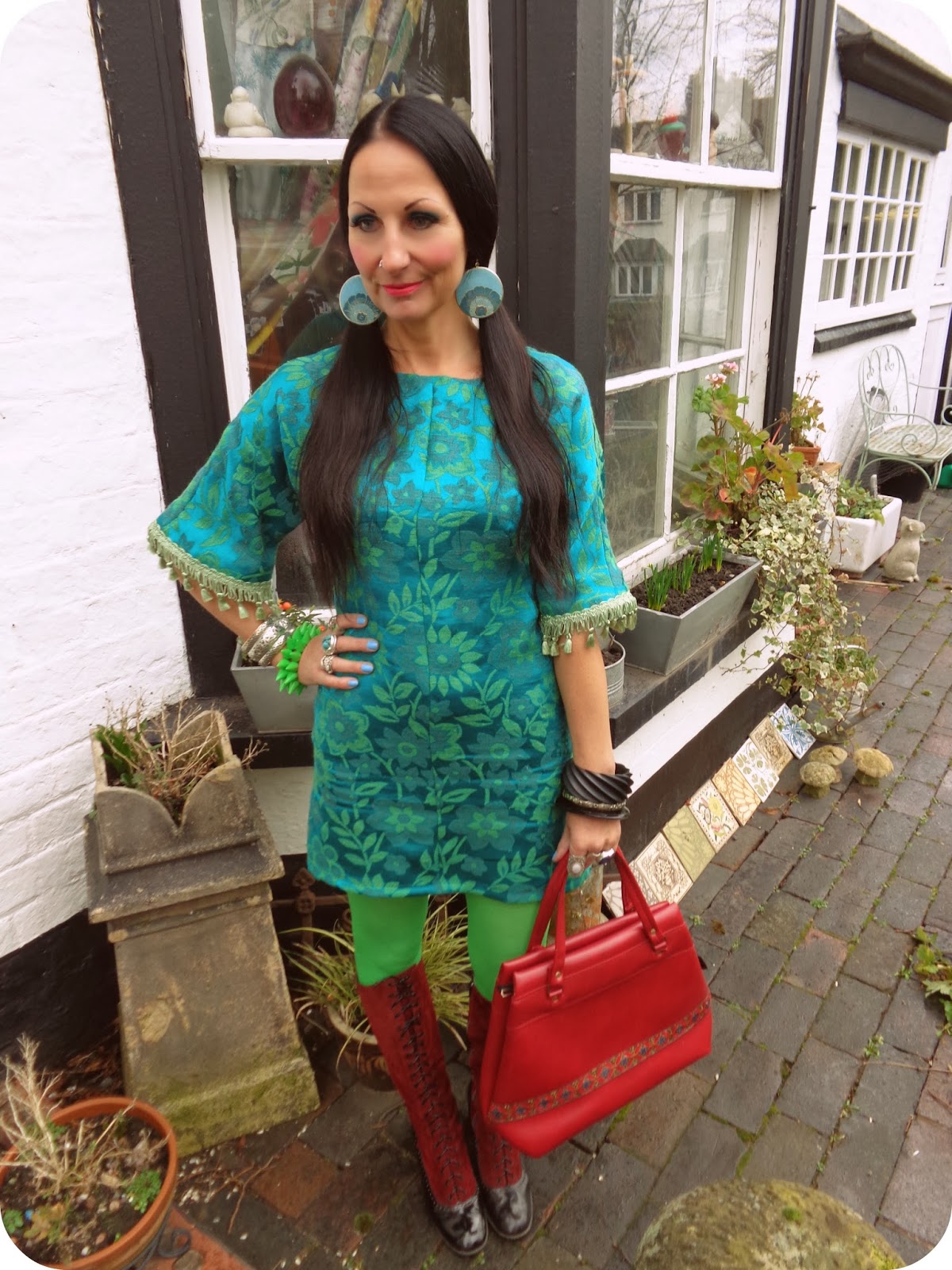 The joy of curtain couture is that everything is second-hand, re-purposed or given to me for free so if it all goes wrong all I've wasted are a few hours rather than a load of cash. 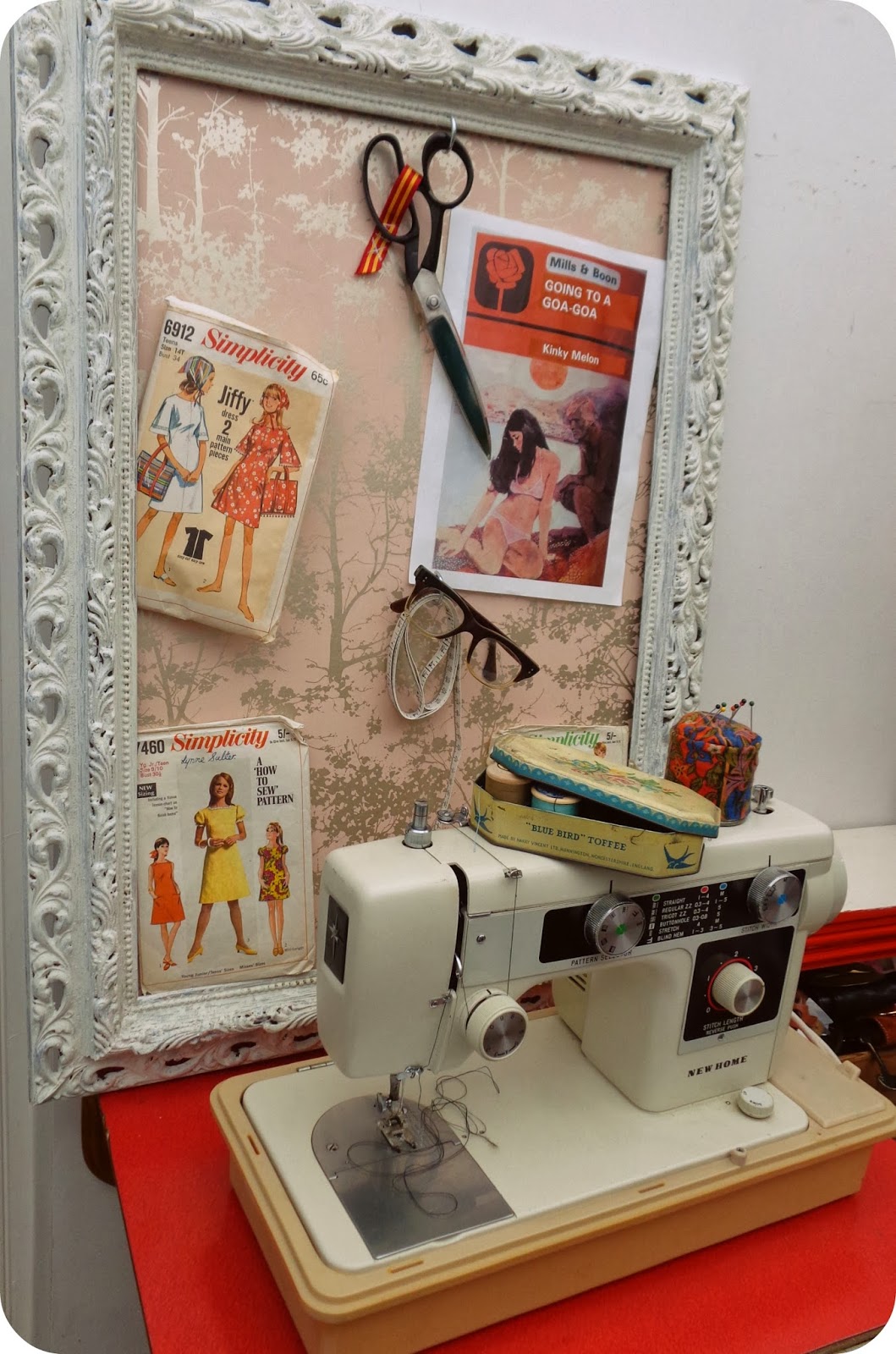 The New Home sewing machine came from a jumble sale as did the 1950s Formica table. I painted a gilt car booted frame, covered some plywood with an offcut of paper from the bedroom wall, glued it in place and screwed in some cup hooks (saved from an old shelf unit) making a handy holder for my specs, on-going projects and sewing essentials. 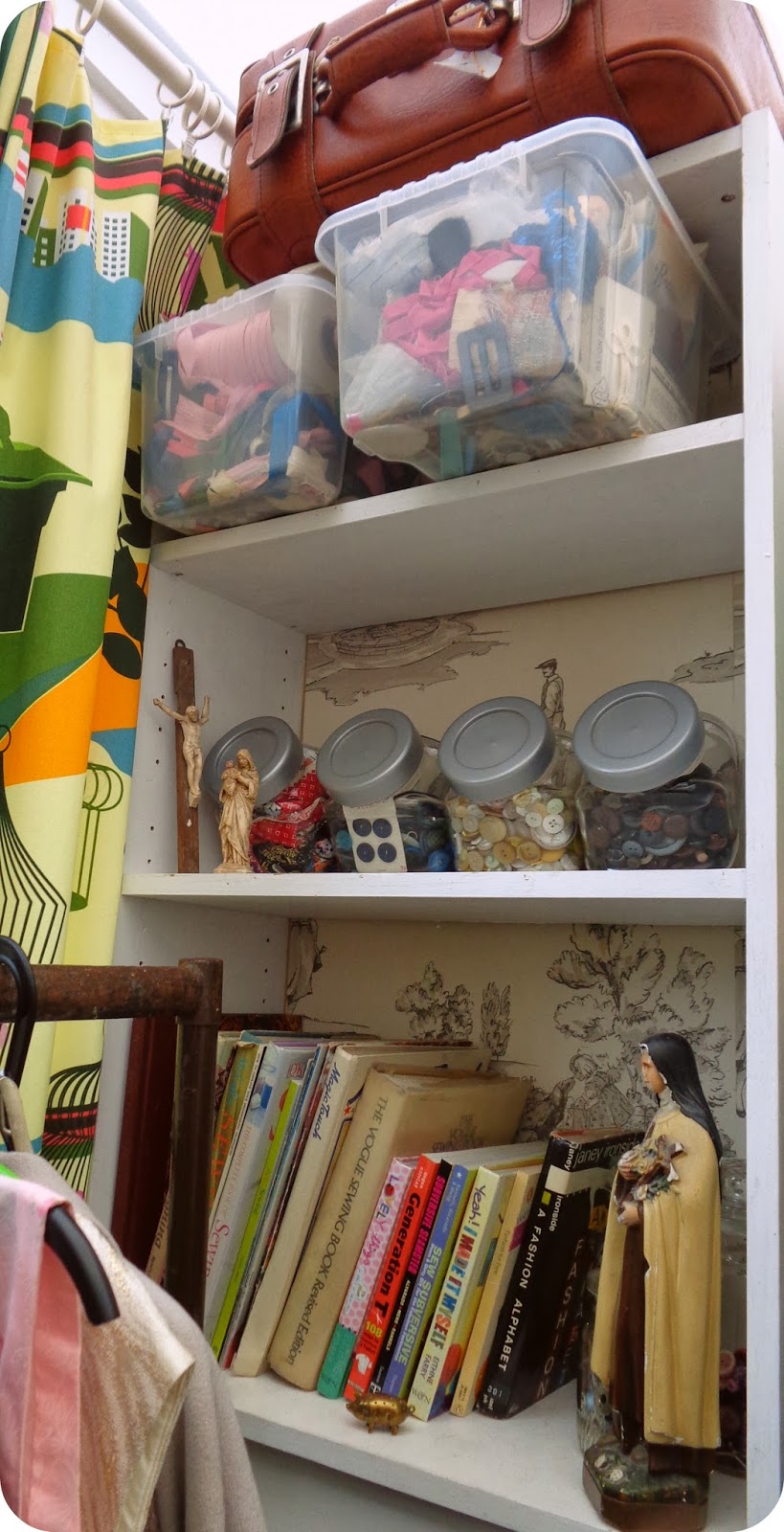 I'll buy tatty, unwearable clothes from jumble sales just to snip off for the trims & zips and find it impossible to resist rusting tins and dusty baskets at car boot sales as they are invariably crammed with reels of thread, carded hooks & eyes and press studs and all manner of pretty buttons and odd bits of ribbon.

Updated for Caroline: The shelves came out of a skip. 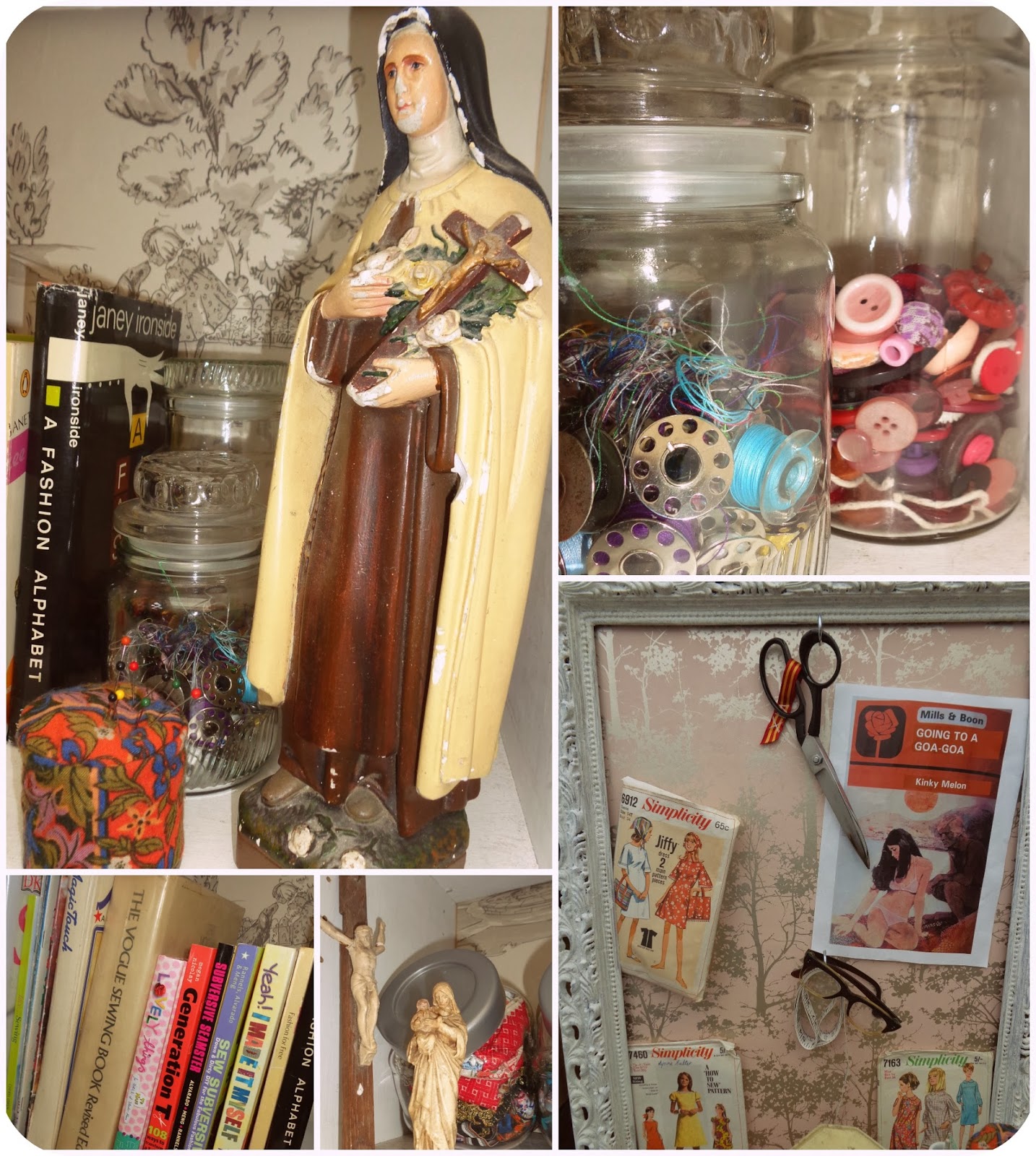 I'm no sewing goddess so I need all the divine intervention I can.St Theresa came from a car boot sale and Mary & the Crucifix were from my Grandma's childhood home. They must have worked, the only problem I had was having to hack off 6 inches from the hem - those 1960s teenagers must have been giants compared to this vintage 1966 model.

I really do need to read the instructions on my camera, I look like I've been bleached. I'm sure I still had a suntan when I cleaned my teeth this morning. 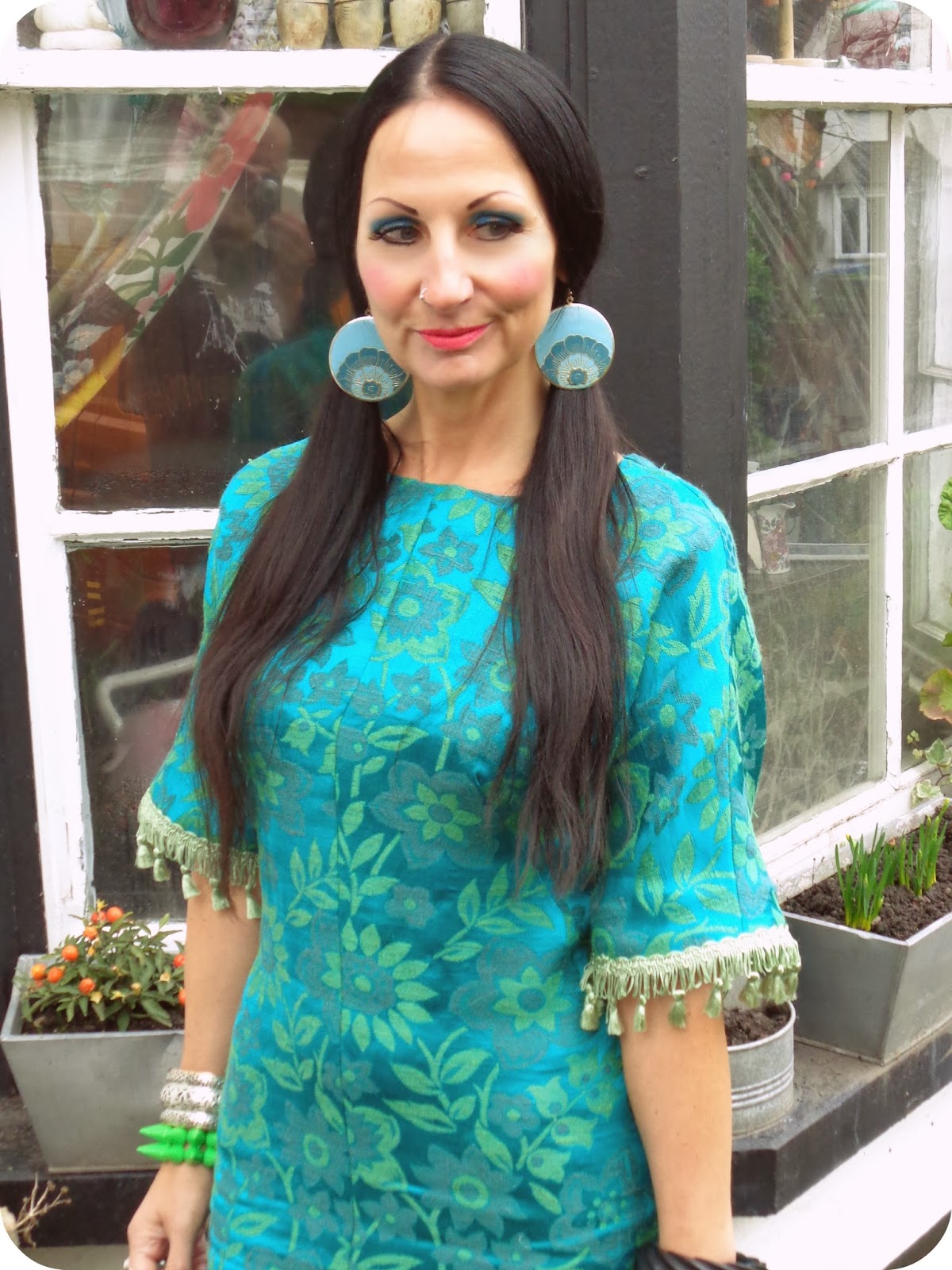 The tête-à-tête narcissus are in bud behind me - could Spring be on its way? Bring on the car boot sale season.

Linking to Bella's Secondhand Link-up as everything from top to toe belonged to somebody else first!