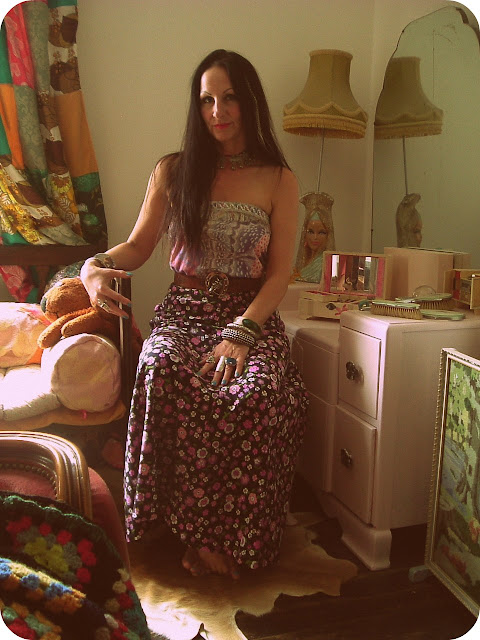 I'm delighted you enjoyed yesterday's tour. Today's the turn of our bedroom.

Our interior design scheme was never planned, we bought (or hoisted out of skips) things that took our eye and it evolved from there. Like my wardrobe, it's a eclectic mix of vintage, second-hand and Indian market tat that reflects my personality (or at least that's what my guests tell me).

We intended this room to be the guest bedroom but after decorating it we loved it more than our own bedroom so moved in. I keep almost all my stuff in the other bedroom so this room's solely for sleeping, relaxing and reading.The most expensive thing in here is the 1920's French Corbielle bed we bought from eBay for just shy of £120. 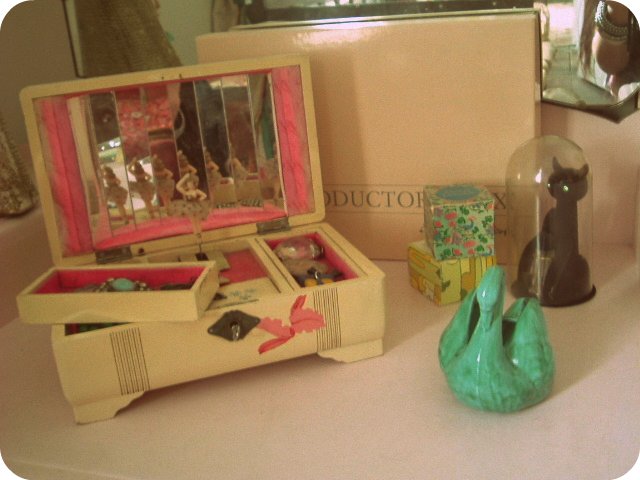 The dressing table was given to me by an ex-landlord in the 1980's after I pleaded with him not to burn it. It's been with me for over twenty five years in various guises. Currently it's painted in Crown's Fairy Dust (a pot of which was the second most expensive item in the room). 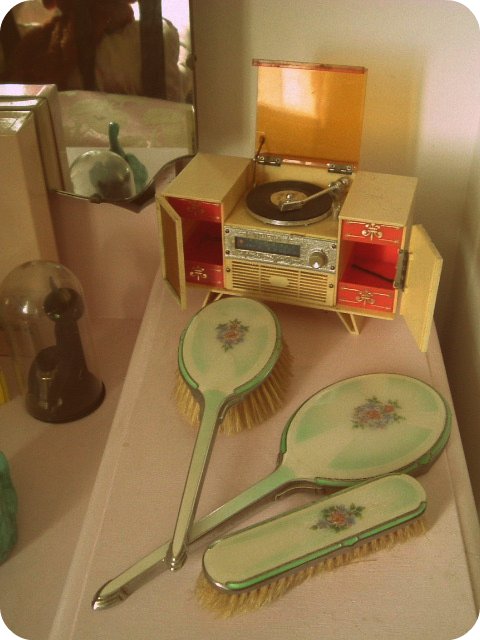 This pre-war Guilloché dressing table set was 75p from a jumble sale, I bought the 1960's musical box from a charity shop as a teenager, it plays Raindrops Keep Falling On My Head whilst the turntable revolves. 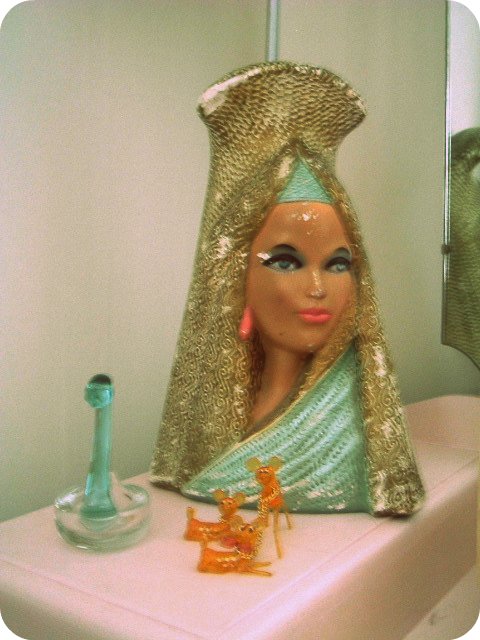 When I met Vintage Laura's mum she told me how much she loved this lamp after seeing it on my blog. She is a beauty and well worth the £1 I paid for her. The 1960's Bambi set were 25p and the glass swan a quid. 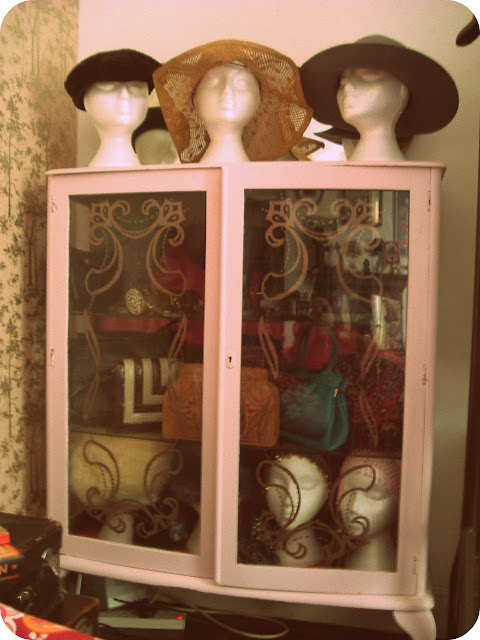 This 1950's glazed cupboard was £4.99 from eBay and is ideal for storing some of my bags and handbags. It's painted in the same shade of Crown paint. 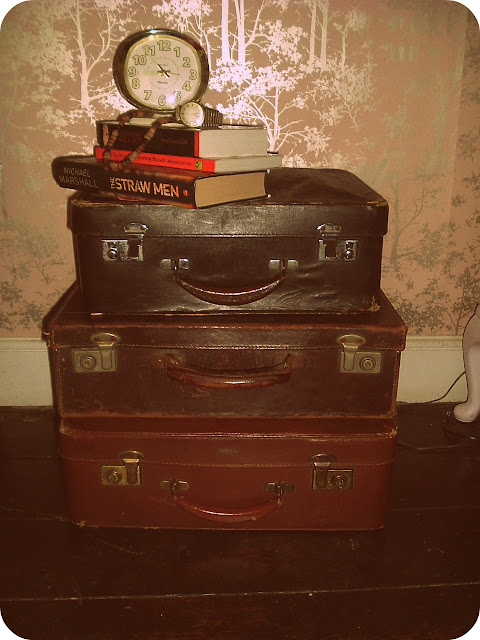 This is Jon's side of the bed. I never pay more than a pound for a vintage leather suitcase, there seems almost a glut of them these days, rarely a day goes by without a blogger posting about buying one at a boot sale. 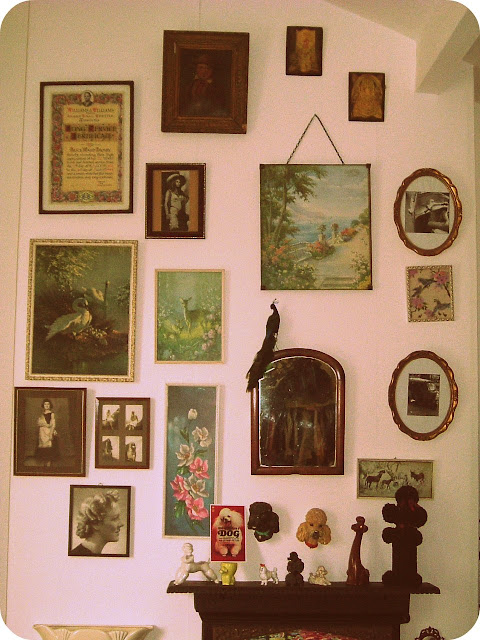 There's no system to my method of picture hanging, if I like it then it gets hung on the wall, the fact that it's all fabulous (and less than a pound) being the common theme. 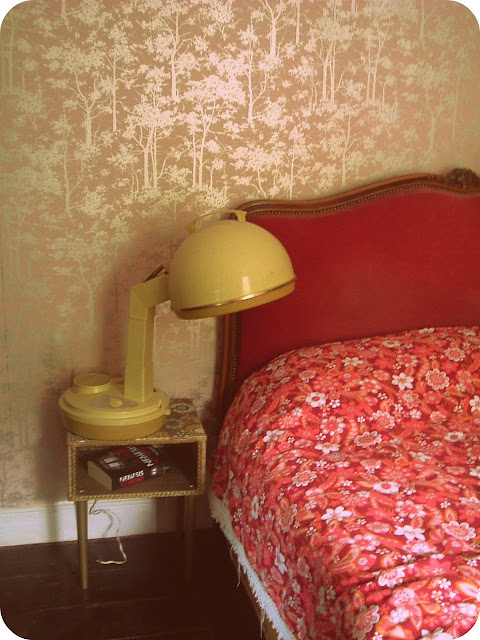 Jon converted this £2 1960's Lady Shick hairdryer into a groovy bedside lamp. I've since bought another one currently awaiting the same treatment. The Cole & Son wallpaper was an eBay bargain (£7 for three rolls) and Lusty Lloyd Loom bedside table was 20p from a jumble sale. 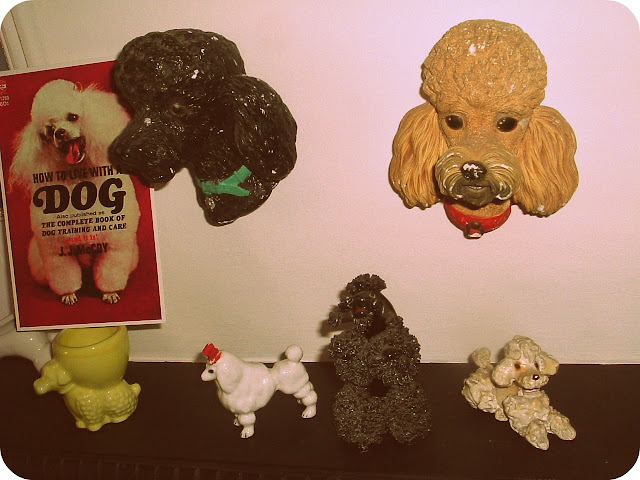 Some of my poodle collection. 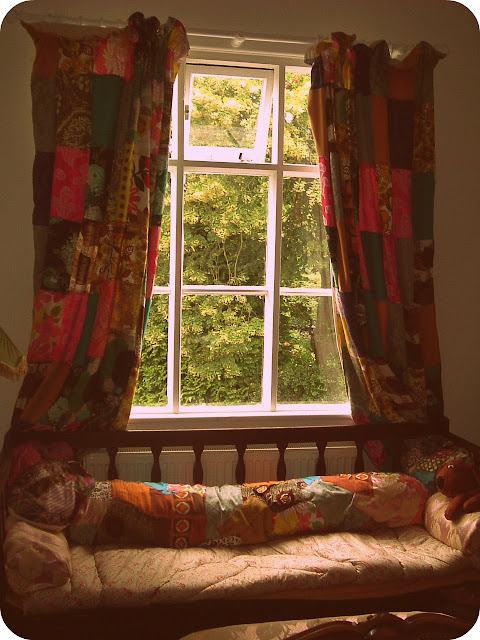 The Edwardian day bed was found in an outbuilding on the property. Like the patchwork curtains the cushions and bolster cover were all me-made utilising jumble sale curtains and bedding.The one-eyed dog was Jon's pyjama case when he was a baby. 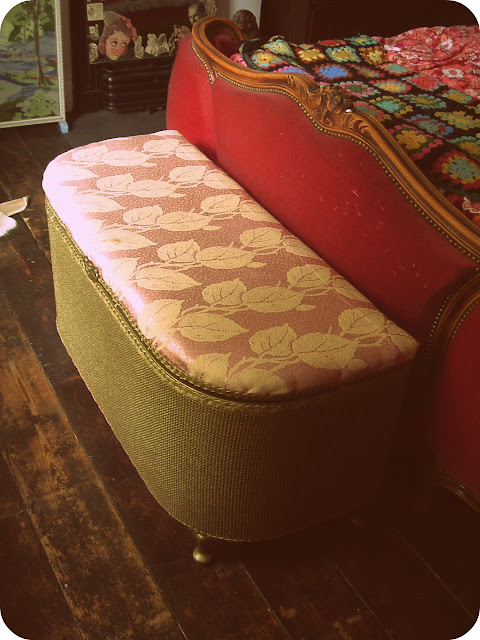 The ottoman was £5 from a charity shop, we recovered it with a jumble sale curtain to match the dressing table stool. My Mum made the Afghan blanket when she was expecting me back in 1966. 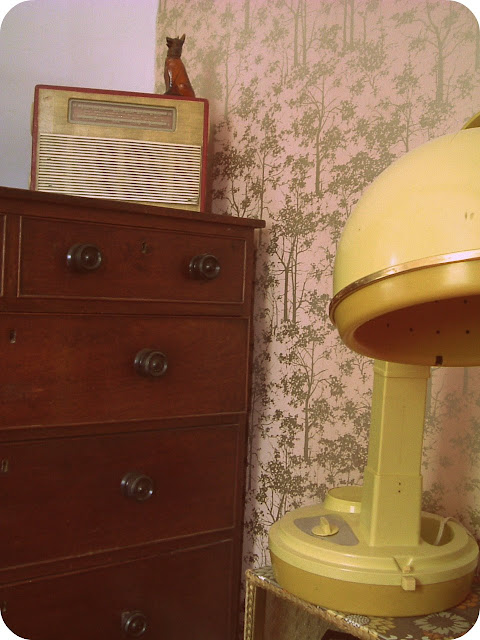 The mahogany chest of drawers are Victorian and were in the house when we moved in. They are so heavy I think they'll still be sitting there when we're long gone. They're currently housing Jon's video and cassette collection. 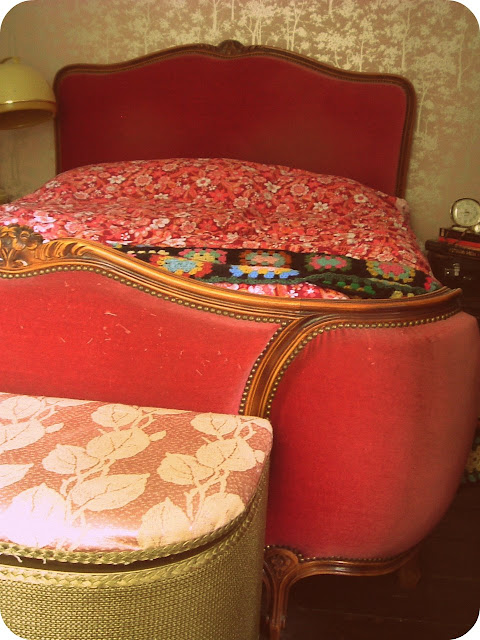 The 1960's bedcover was from a jumble sale. I'm not bothered about using second-hand bedding in the slightest, it's washed before it goes on the bed after all. The ottoman holds blankets and spare bedding. 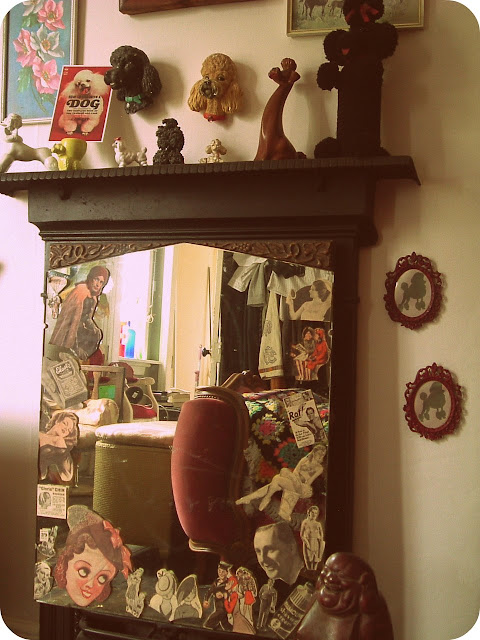 The cast iron fire surround was £10 from a car boot sale and painted matt black. The original fireplace is bricked up and after opening up all the others in the house we've lost the will to do this one. It's being concealed with a dressing table mirror I found in a skip decorated with cuttings from some tatty WW2 era magazines.

Hope you enjoyed the tour. The kitchen'll follow very soon.
Posted by Vix at Tuesday, July 05, 2011

Email ThisBlogThis!Share to TwitterShare to FacebookShare to Pinterest
Labels: Our House, Patchwork