Our Greek Odyssey - In Search of the Minotaur 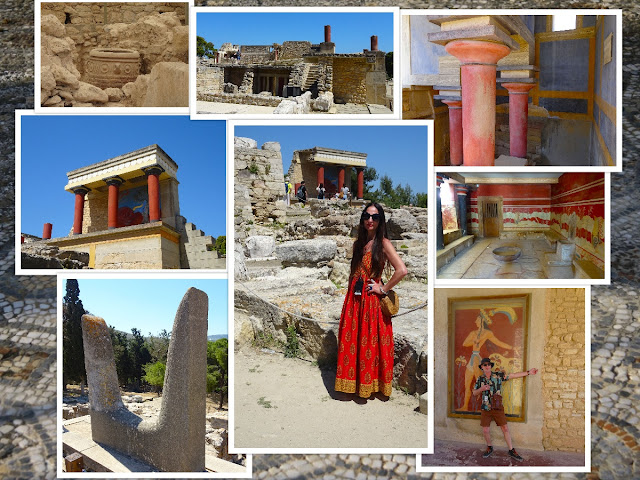 On Sunday, just before 7.30am, we climbed aboard the coach we'd booked on Friday morning and travelled towards Crete's capital, Heraklion. Although only a 64 mile drive from Chania, the journey to the south of the island takes around three hours as it involves navigating numerous winding - but beautifully picturesque - mountain paths. Our first destination was Knossos and the Palace of King Minos, a settlement built around 1800BC, making it more than three and a half thousand years old.

Knossos is primarily associated with the British archaeologist, Sir Arthur Evans, often referred to as the real Indiana Jones. Whilst searching for antiquities at an Athens flea market, Evans came across some seal stones inscribed with mysterious writing, which he believed originated from Crete and, after his beloved wife's untimely death in 1894, made it his life's work to travel to the island and uncover the whereabouts of the Palace of King Minos. Civilisation on this site dates to around 7000BC although Minos's Bronze Age palace dates to 1800BC.

I'm sure many of you will have heard of Knossos from the tale of Theseus and the Minotaur. King Minos was the son of Zeus and, along with Crete, ruled all the other islands of the Aegean Sea. Every year he would sacrifice his best bull to honour the sea god, Poseidon but one year decided his finest bull was too magnificent to kill and slaughtered another instead. Poseidon was furious when he discovered Minos's deception and, in revenge, ordered Eros, the god of love, to fire an arrow at Minos's wife, Queen Phasipae, causing her to fall in love with the first creature she set eyes upon, which so happened to be the bull. Phasipae subsequently gave birth to the Minotaur, a monstrous creature with a man's body and the head of a bull with a thirst for human blood. Minos instructed Daedalus, a craftsman famed throughout Greece, to build a labyrinth to contain the minotaur and appointed King Aegus, the Athenian king he had defeated in battle, to select seven young boys and seven young girls which were then sent to the labyrinth to be sacrificed to the monstrous creature every nine years. Theseus, the son of King Aegus, was one of those chosen. Whilst at Knossos, Theseus and King Minos's daughter, Ariadne, appointed by her father as the guardian of the labyrinth, fell in love. She handed him a sword and a ball of golden thread enabling him to slay the minotaur and escape the labyrinth. 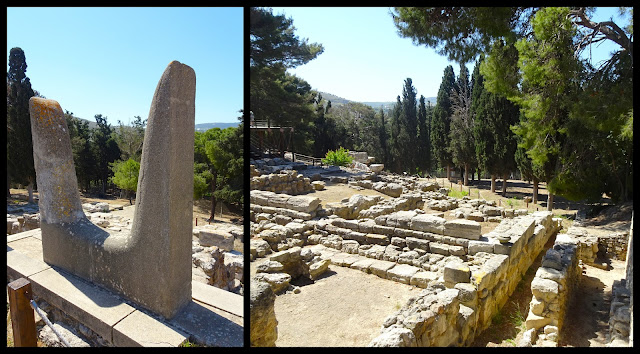 But, if the story of Theseus and the Minotaur really is a Greek myth, how do you explain the existence of the labyrinth Evans discovered during his excavations or the significance behind the bull's horns seen throughout Knossos from the towering statutory to the designs on Bronze Age ceramics found amongst the ruins? 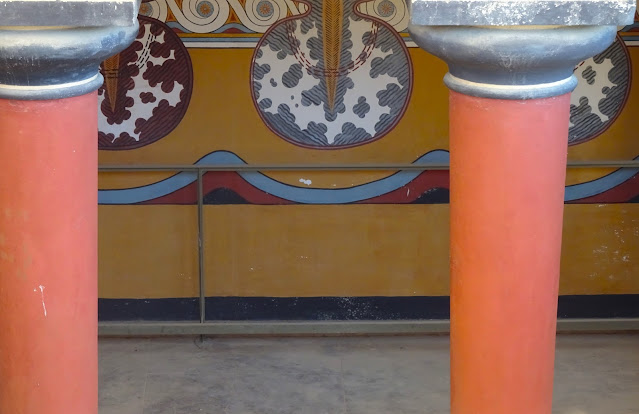 The restorations which Sir Arthur Evans claimed were necessary to preserve Knossos have been the subject of furious controversy for decades. The frescos and paint colours were pure conjecture on Evans's part, created from the fragments he'd found during his excavations, but whether or not they are entirely accurate, they certainly give a sense of the grandeur of King Minos's palace. 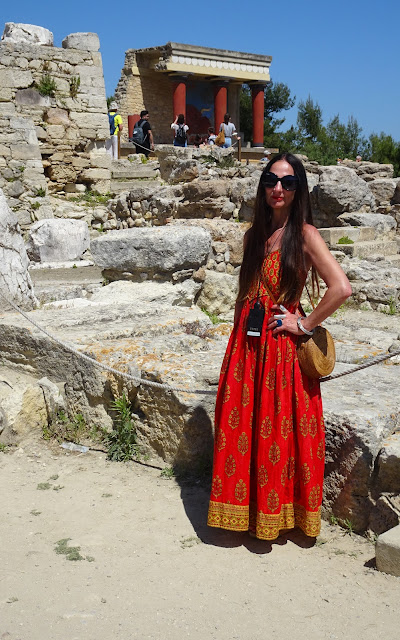 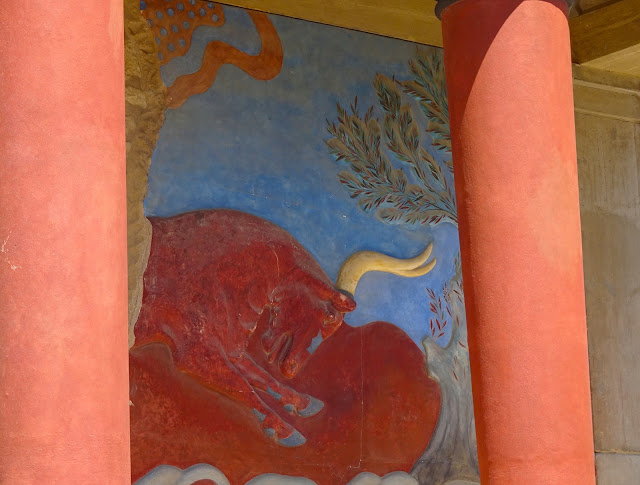 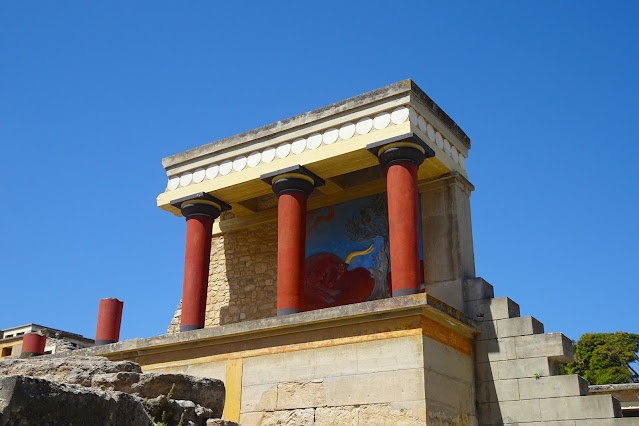 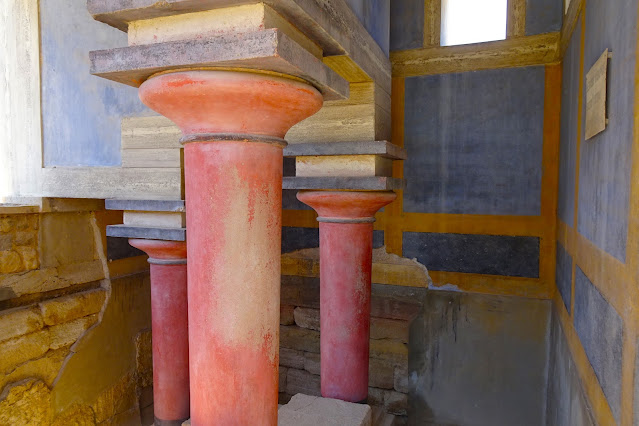 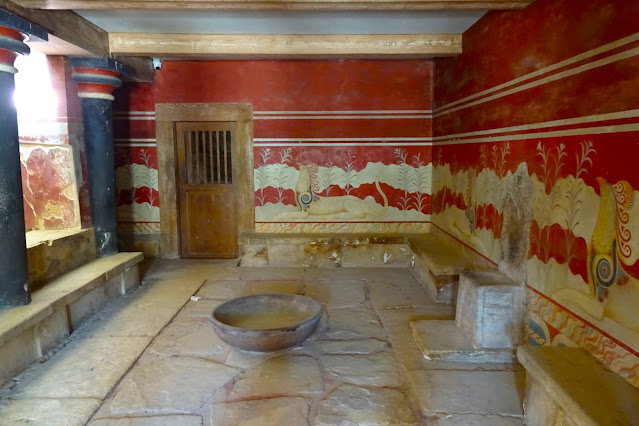 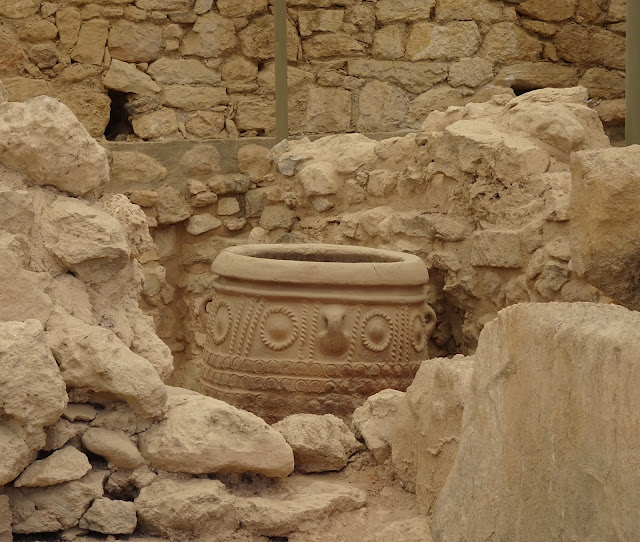 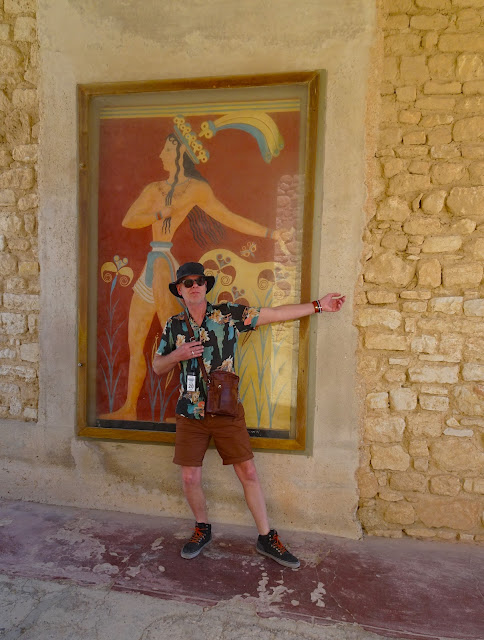 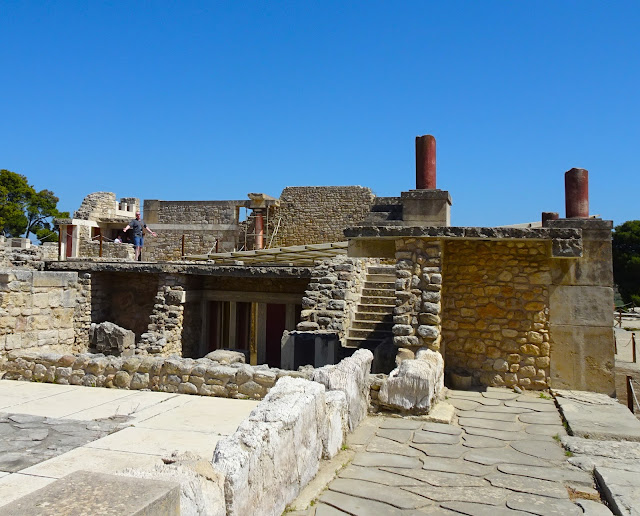 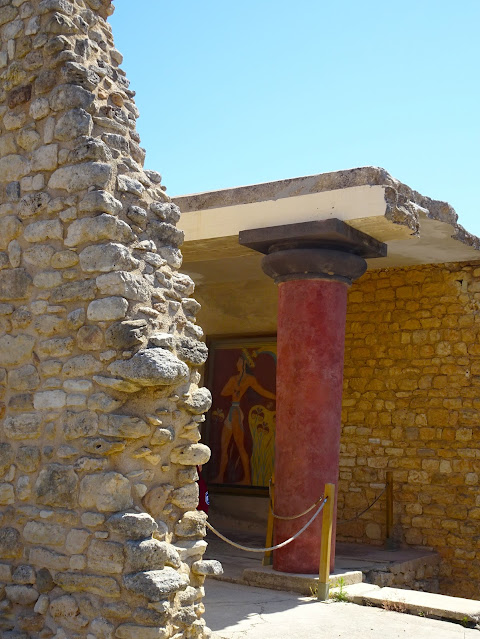 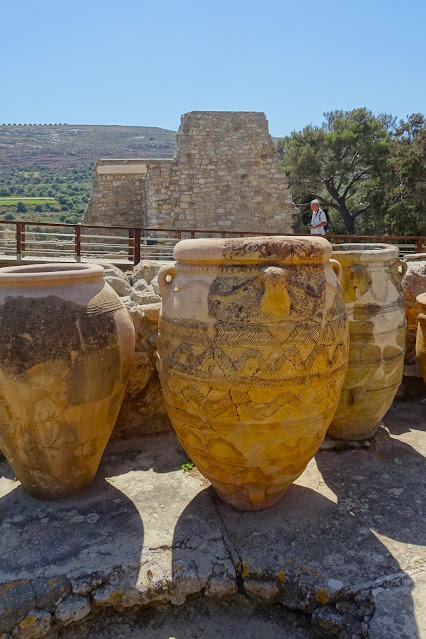 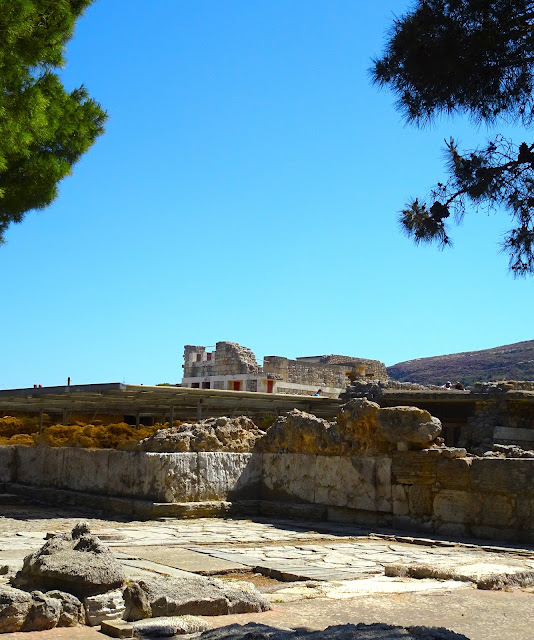 We hadn't realised that the coach tour we'd booked included the services of a guide but, to be honest she was a bit dull, so we turned off our Whispers and explored the site under our own steam, meeting up with the rest of the group at the designated time. 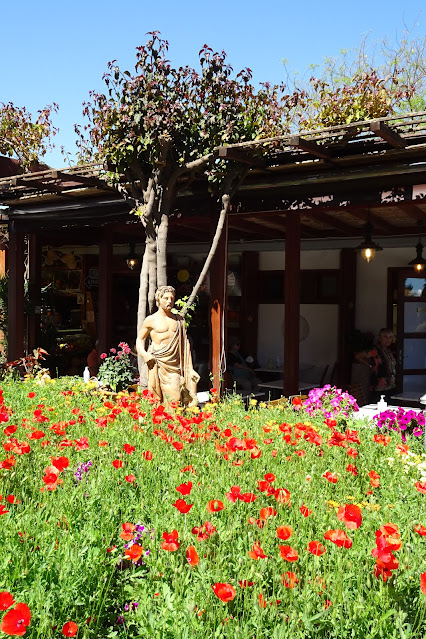 After a 90 minute break for lunch, we headed to Heraklion's Archaeological Museum. Again, we eschewed the services of the guide, preferring to wander around on our own and read the excellent signage on any exhibits that took our fancy (which, in my case, was most of them!) 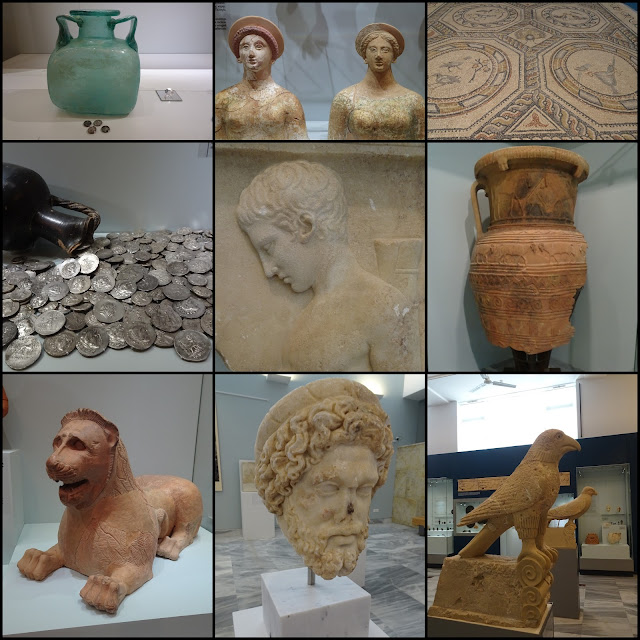 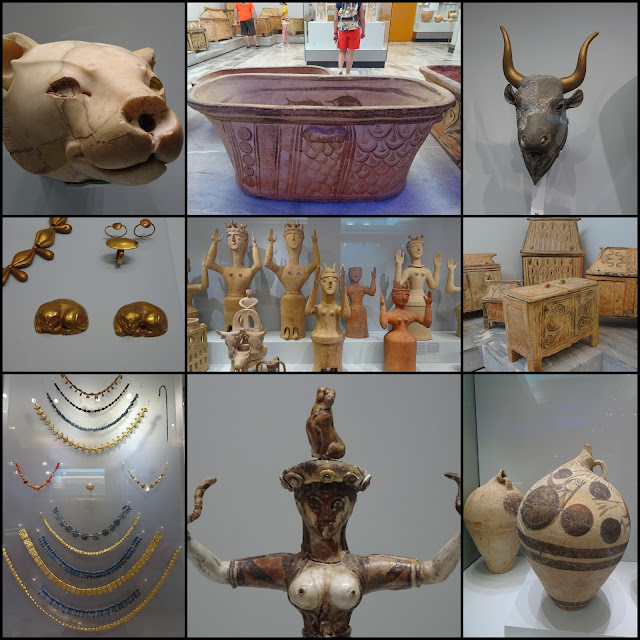 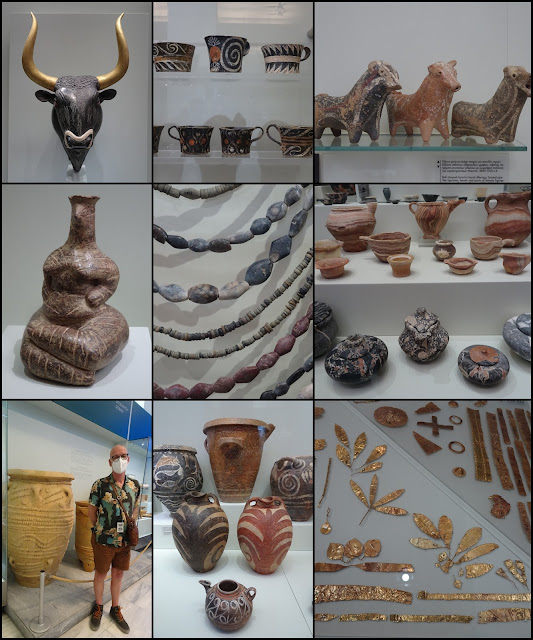 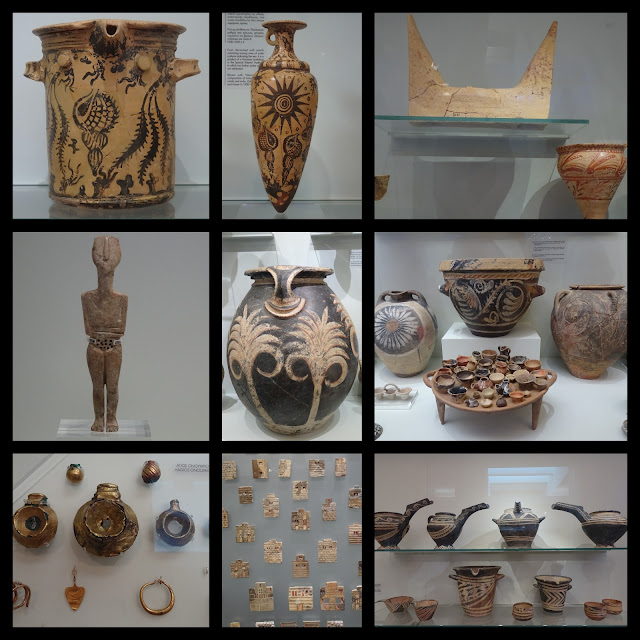 We had to smile at the British, Canadians and Americans we overheard exclaiming, I can't believe how old these things are! 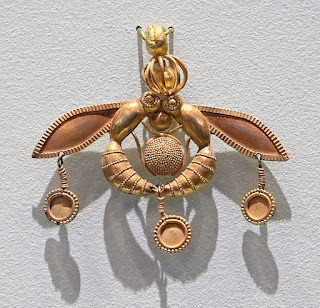 For me, the star of the show was the solid gold Malia Pendant, also known as the Bees of Malia, said to be the single most important piece of Minoan jewellery in existence. Excavated by the French in a tomb at Crysolakkos, near Malia, in 1930, it dates to 1800BC and takes the form of two identical insects thought to be bees, joined head-to-head with their abdomens touching. The circular disc in the centre represents honey whilst the three discs below are said to represent the Mediterranean herb Hartwort,  popular in Minoan times. Straight to the top of my souvenir shopping list went a replica of a four thousand year old necklace...did I find one? Watch this space! 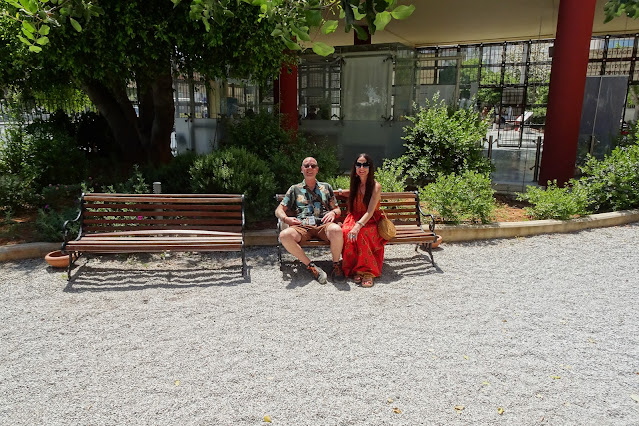 Entrance to Knossos is €12 and the Archaeological Museum in Heraklion is also €12 but you can get a combi ticket for €20 allowing entry to both. For EU members over 65 the tickets are half price and the admission is free for EU members aged 25 and under which, of course, doesn't apply to UK citizens - bloody Brexit.... 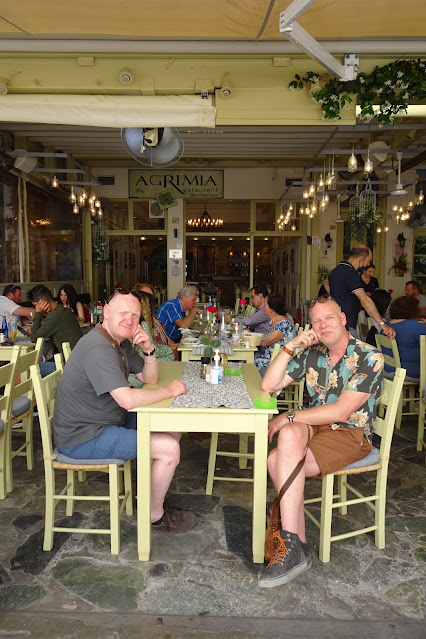 On the way back the coach stopped at Rethymno for an hour where we'd been less than 24 hours ago!It was Sunday and family day for Greeks so the city was bustling. We managed to find the last table at Agrimia, where we'd eaten several times in 2020 and ordered an iced coffee before a wander around the harbour. 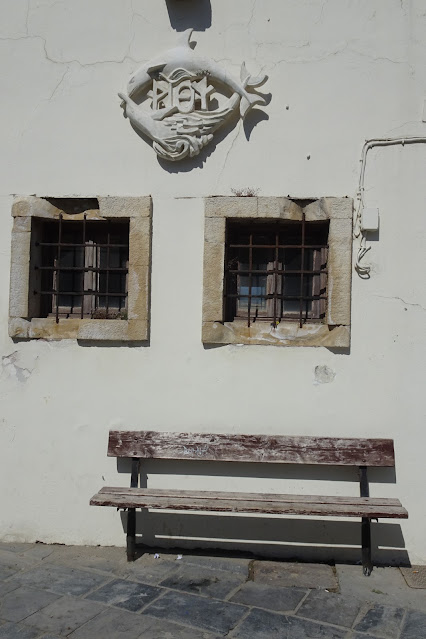 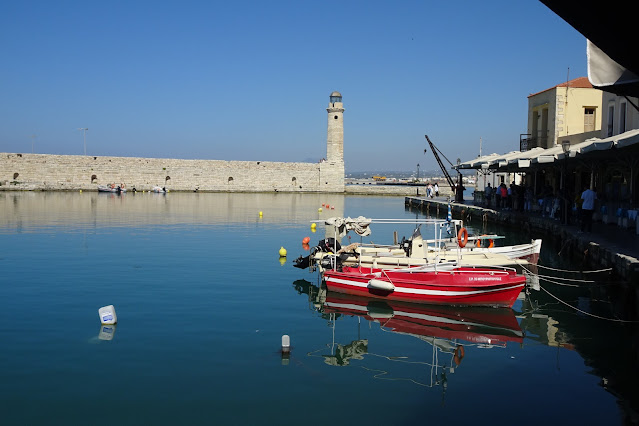 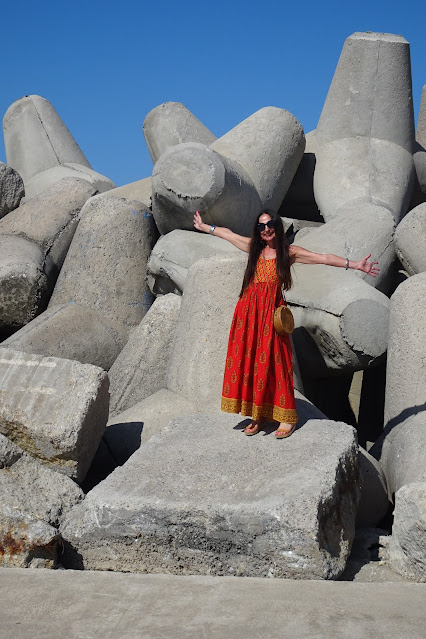 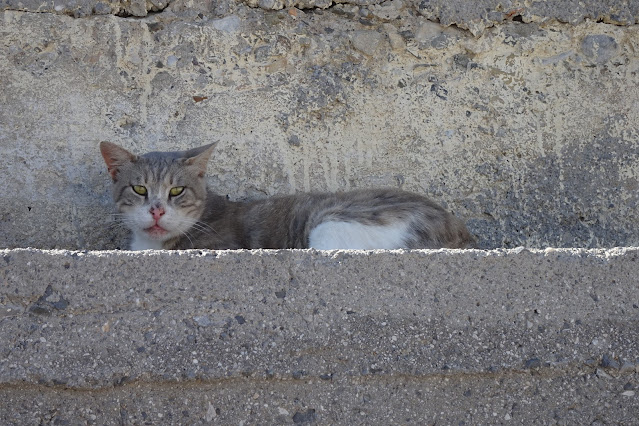 It was after 7pm by the time the coach had wended its way through the White Mountains back to Chania so it was showers and out, no stopping for beers on the roof.

We stumbled upon a craft ale bar and tried a couple of the local beers before eating at the ruin we'd had drinks at the previous evening. Tony had grilled fish, Jon had lamb souvlaki and I had the most divine lentil-stuffed vegetarian moussaka. Throughout our stay, the night time temperature had gradually crept up and by Sunday evening I had dispensed with my denim jacket and long sleeved dresses (just as well I only travelled with two). 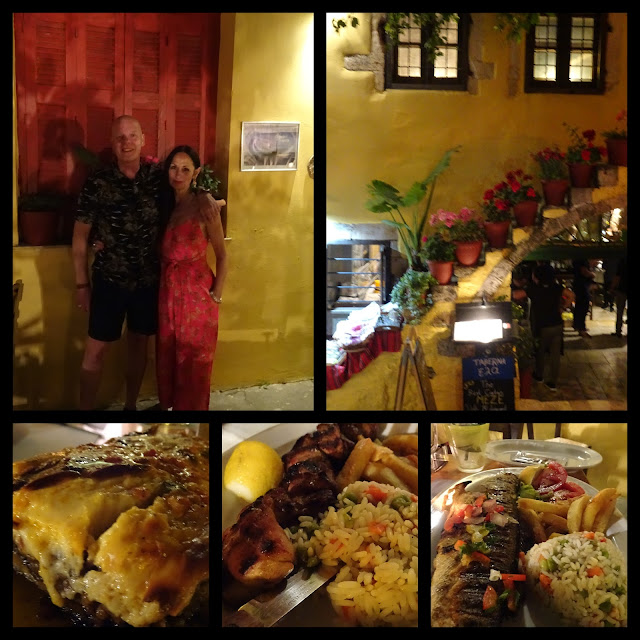 After a twelve hour Greek epic and a bellyful of food and drink, we slept soundly that night!

I'll be back soon with the grand finale of our Greek Odyssey. In the meantime do check out the superb Knossos documentary by our favourite TV historian, Bettany Hughes.