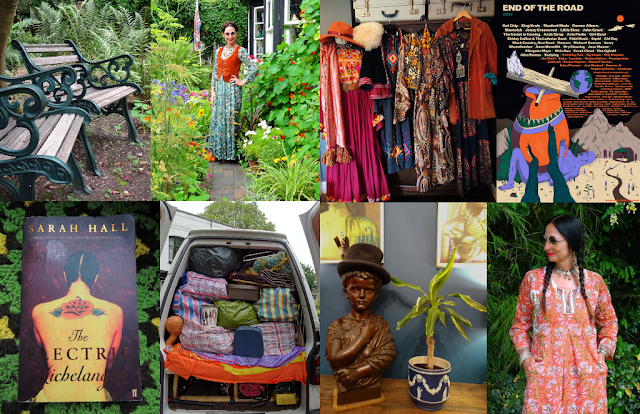 We went over to collect Ray & Florence's unwanted garden furniture, although it was so heavy I ended up leaving it to the menfolk to sort out whilst I chatted to Florence about their trip to Gardeners' World Live the previous day. There are four chairs and a dining table currently scattered around the garden. We'll stain the wood and repaint the ironwork in the Autumn. 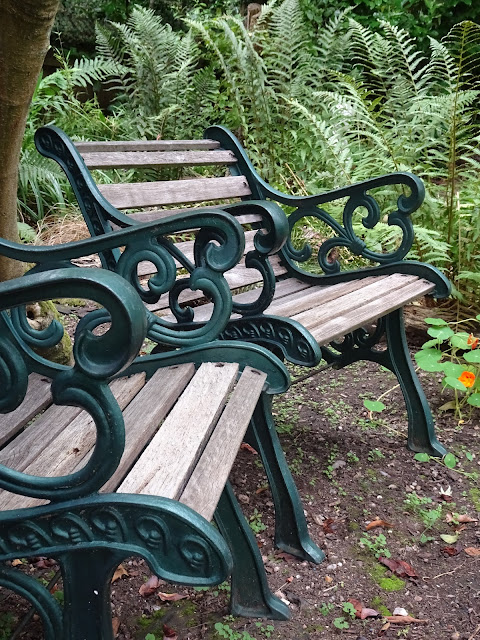 Back at home, the sun had made a welcome reappearance so I spent the rest of the day outside reading my latest book (the marvellously visceral tale of Cy Parkes, a tattoo artist born in the North of England at the turn of the century but whose profession leads him to set up shop amongst the freak-shows of Coney Island). 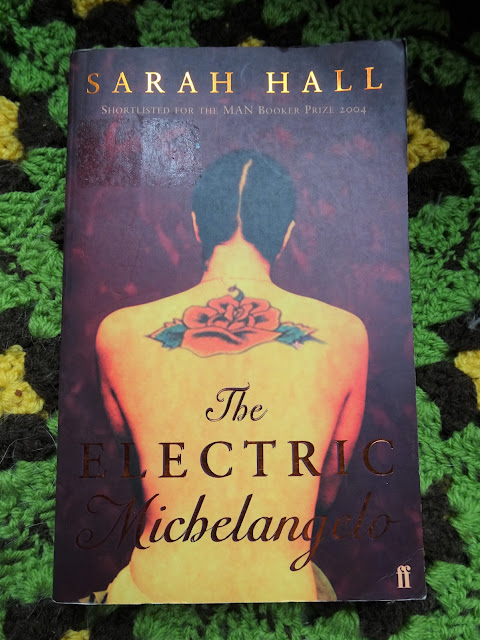 We'd harvested more patty pans and courgettes which Jon oven-roasted with harissa paste & shallots and served on a slice of sourdough bread with melted cheese on top. Later we drank rum and finished watching The Man in the High Castle, which was absolutely brilliant. 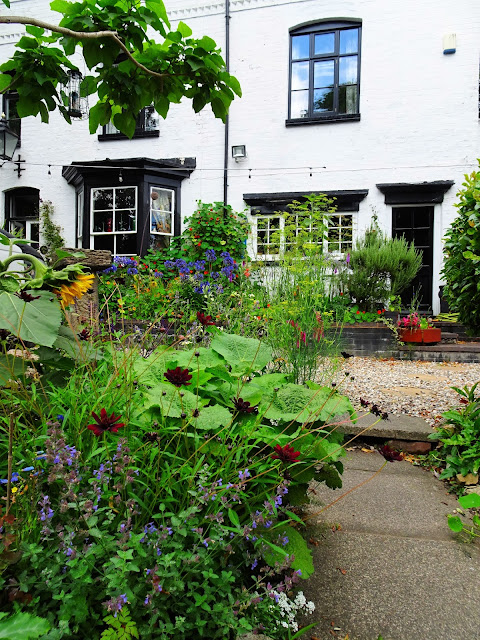 On Sunday morning we needed a few bits for next week so combined a trip to Wilko with what will be our last trip to the clearance charity shop for a while. Along with a couple of books and some vintage glassware, we boxed up our old printer (which still works but we've since replaced it with a more energy-efficient model) and donated them in the hope of some charity shop karma. 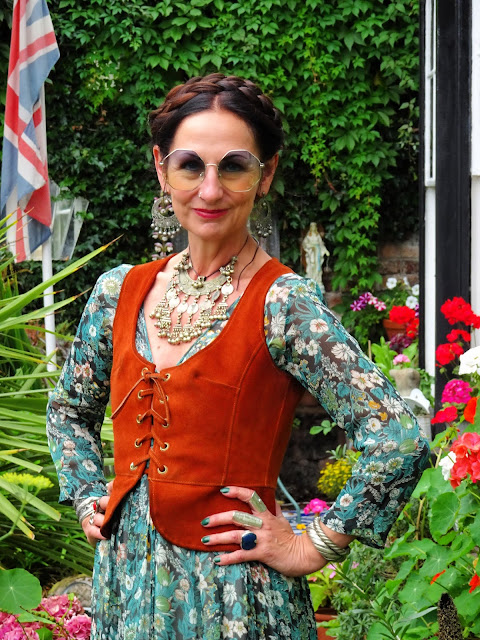 After Saturday afternoon's warm sunshine, the weather had reverted back to the gloomy, grey chill that has plagued us for weeks. I wore my vintage suede waistcoat over my Stella Forrest silk maxi dress and Toast Western boots. 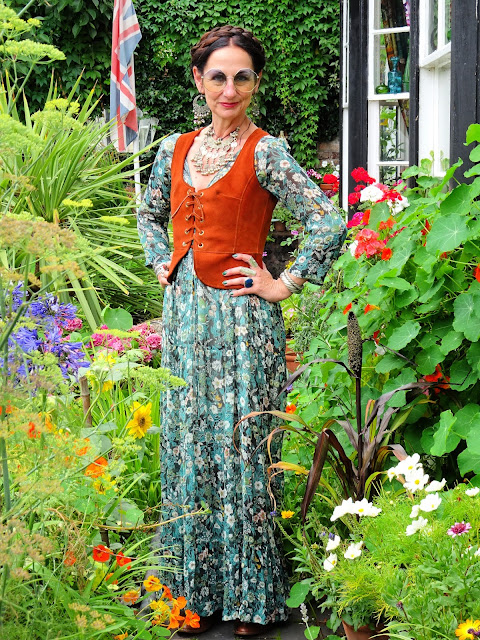 After a joyful hour rummaging the charity shop rails, we walked to Wilko, bumping into a mate we'd not seen since End of the Road, 2019 and spent ages catching up. We managed to get everything on our list and were back in time for lunch. 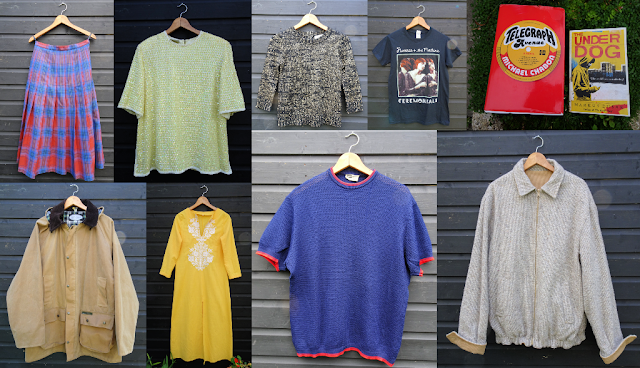 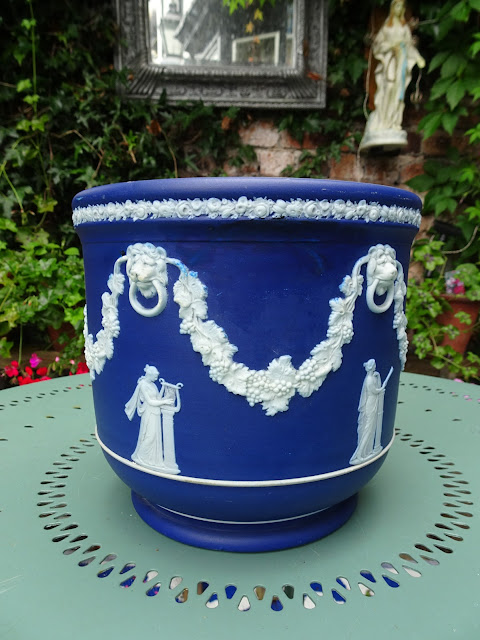 Normally I loathe Wedgwood's Jasperware and, due to Walsall's close proximity to the Potteries, the charity shops are crammed with the stuff, however, there was something about this planter I couldn't resist. Cobalt blue Jasperware isn't as common as the ubiquitous wishy-washy pastel blues and greens and I loved the combination of the neo-classical women, grapevine swags and handsome lion's heads. Back at home, I looked up the back stamps on the base and discovered the planter would have been made between 1891 and 1908, a proper antique! Jasperware fell out of fashion in the UK years ago so I was stunned to see the identical planter to ours listed on Etsy by a British seller for £190- it made the £3 I paid a bit of a bargain! 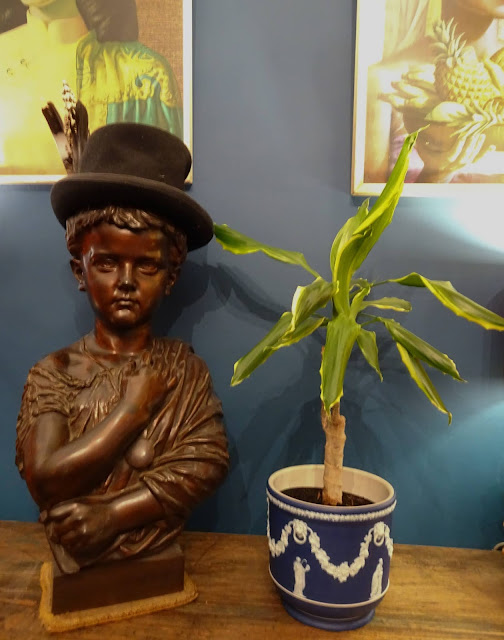 After lunch, I washed/ freshened up the new finds whilst Jon sorted out his festival wardrobe. We spent a bit of time pottering around the garden, harvesting our new potatoes and pulling up a few more strangely shaped (but tasty) carrots. 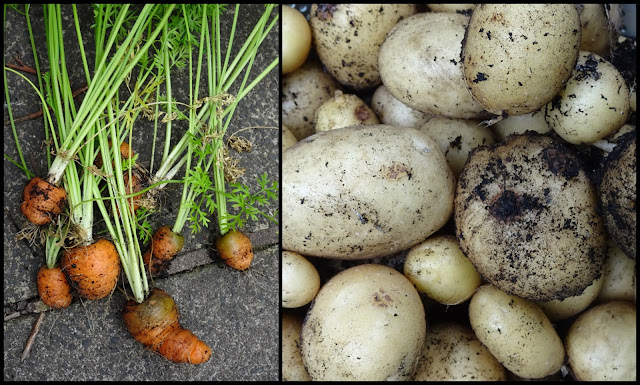 We had a slice of pizza with homemade potato salad & coleslaw and watched the first of the new series of Gone Fishing as well as catching up with Friday night's Boleyn documentary. 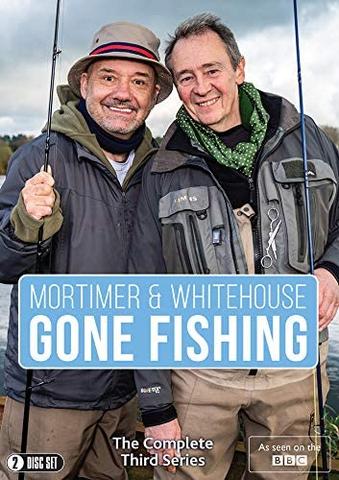 Today is a bank holiday in England, not that it makes an iota of difference to us self-employed. After my Wii Fit workout, I ironed & priced Sunday's charity shop finds and swept the stairs, landing and bathroom before Jon got up. After breakfast, we bagged up the stock & broke down the clothes rails and loaded them into the van.

Despite it being a day of labouring, I still got dressed. The clearance chazza is one of those annoying shops that colour codes their stock. I hate it as I get overwhelmed searching through racks of the same colour clothes. I usually give the grey section a wide berth as it's a colour I dislike but I'm a sucker for a bit of embroidery - and a fine quality fabric - and luckily for me, this Alexander McQueen silk and cotton blouse adorned with crows just happened to be right at the front of the rail when we were in there yesterday. 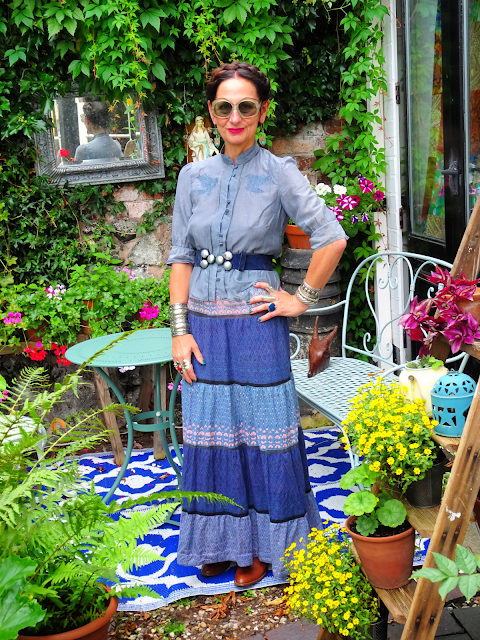 McQ is Alexander "Lee" McQueen's ready-to-wear, diffusion line and was made under license by Italian company Sinv SpA from the label's launch in 2005 until Lee's tragic death in 2010, making this £3 blouse at least 11 years old. 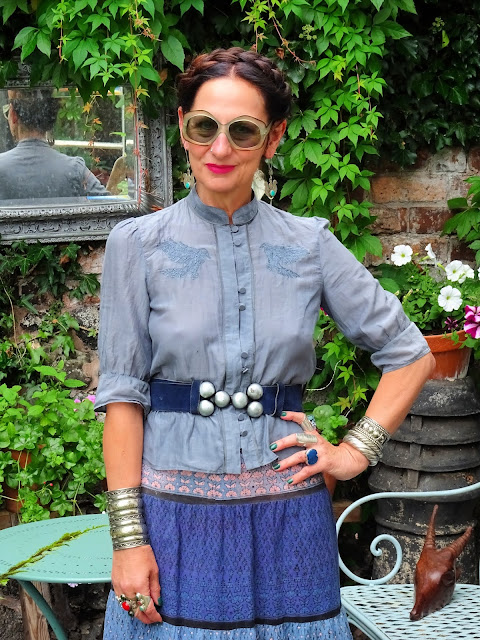 Holding the shirt up against my skirt rail, this 1970s India Imports of Rhode Island tiered maxi leapt out at me, the bottom tier a near-perfect match. The 1970s Nordiska belt was from the 20p man at the car boot sale over a decade ago and the vintage French deadstock sunnies were from a vintage fair back in 2014. 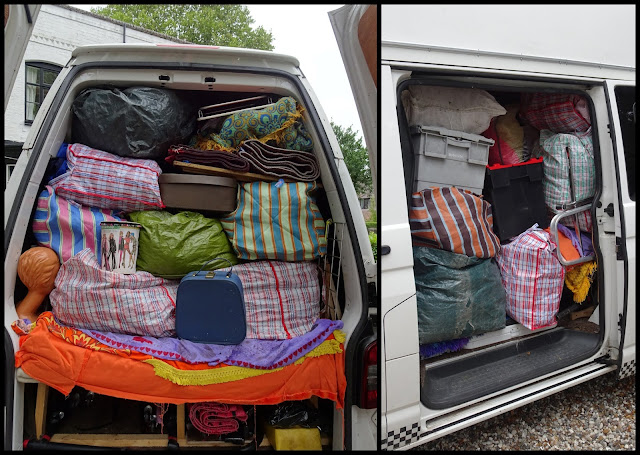 After a lunch break, we took down the Gala tent and loaded it into the van followed by the outdoor rugs. It's a tight squeeze but it's all in now minus our own clothes, booze, electric coolbox, water containers and food. It wouldn't be the first time I've travelled to a festival atop a crate of ale! We bought a larger VW van a few years ago which Jon converted into a campervan - yes - there's a bed under all that. Gilbert's too small for our festival needs these days (and his classic car insurance isn't valid). 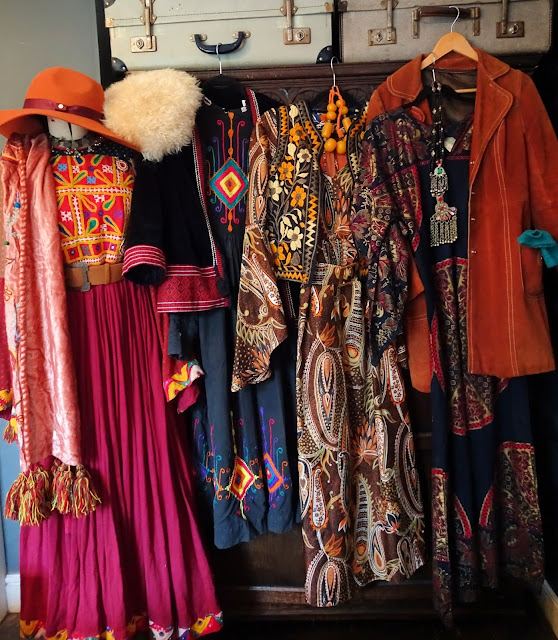 Next weekend's forecast is for below-average temperatures and the chance of a shower so I've gone full-on Autumn. If it does get hot I've always got a vintage shop I can borrow from. 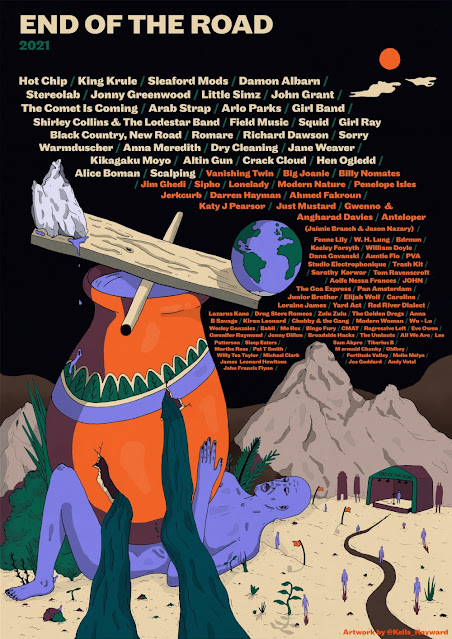 I still can't believe we're getting our old life back and going to a festival - I don't know what I'm most excited about - after almost two years even the prospect of portaloos seem thrilling! 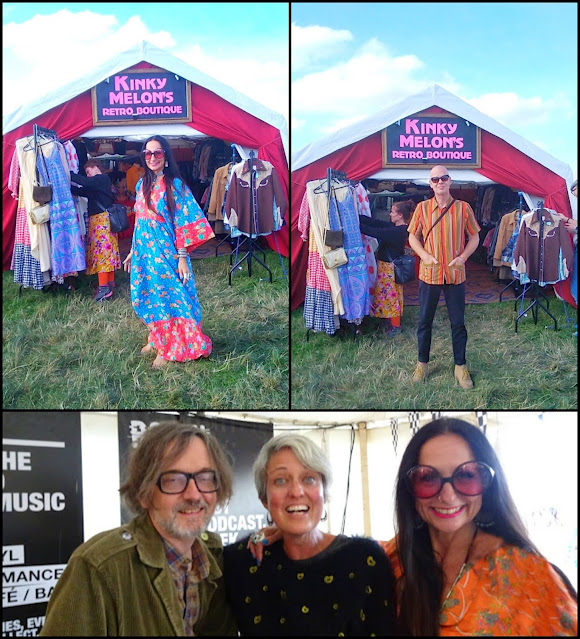 Email ThisBlogThis!Share to TwitterShare to FacebookShare to Pinterest
Labels: Charity Shopping, Festival, It's All About Me, Kinky Melon, Out and About, Outfit, Packing