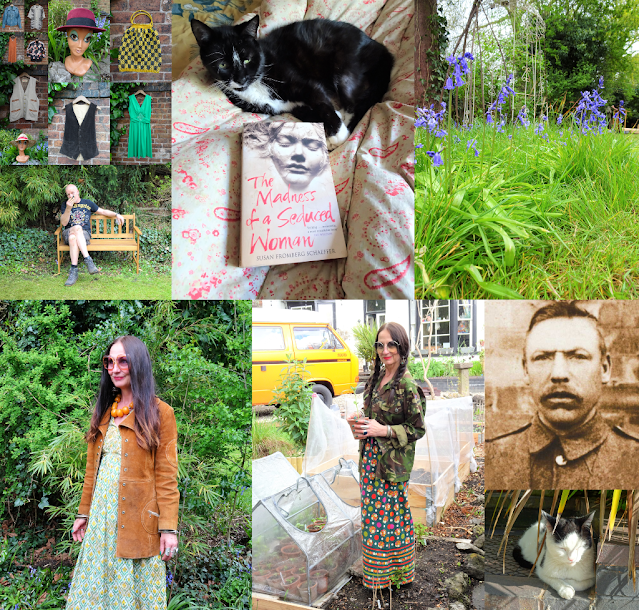 Now it's light when I get up I'm back into my summer routine, taking a wander around the garden whatever the weather to check what's popped up overnight. Tuesday morning was no exception and I saw that my petunias weren't far from flowering and an old hebe already had. After my Wii Fit workout, I caught up with blog comments until Jon got up. The previous evening he'd spotted something strange on Frank's face and, after some research, discovered it was a tick. Lacking the confidence to remove it ourselves he called the vet and managed to get an appointment. We were supposed to be going on a National Trust visit which I cancelled and rebooked for later in the week. 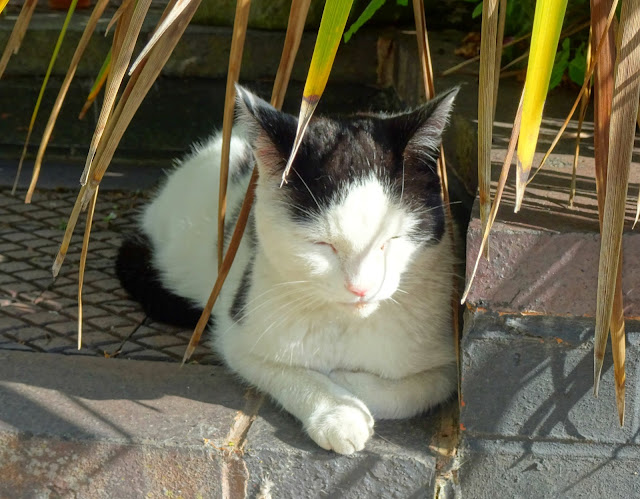 While Jon and Frank were out I ignored the rain and thinned out the crocosmia and Oriental poppies in the border replanting them elsewhere. Just as the lads returned the rain became torrential and a deafening clap of thunder had me joining them indoors. The vet had managed to remove Frank's tick, check his ridiculously thick fur for more (thankfully, not) and give him a liberal dowsing of tick deterrent. After a bowl of chicken, Jon was all but forgiven.

After our lunchtime noodles, we did a tip run, taking four of the five sacks of garden waste we'd filled last week, then spent the remainder of the afternoon in the garden. Jon built more wigwams and planted out his Greek beans, sweetcorn, courgettes and cucumbers while I potted up sempervivums and more nasturtiums.

We'd grown a cerinthe major from a seed we collected on a walk last summer which I popped into the border before planting the geraniums Jon had managed to divide.

How fabulous is the limestone corbel we unearthed a few weeks ago? Some of Stonecroft's skirting boards are limestone, I bet this came from an old fireplace back when the house was a terrace of three farm labourer's cottages. 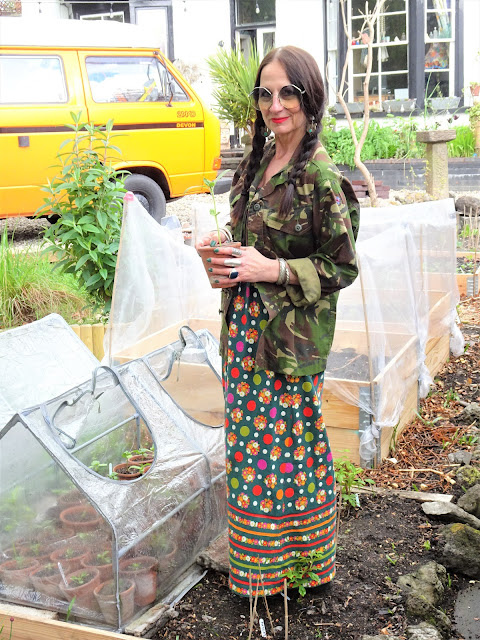 Whilst tea was being prepared I did a little more ancestry research and discovered another interesting relative, Jon's great-great uncle, Richard Hartshorne. Richard was born in Walsall in 1883 and was employed as a pikeman in the local coal mine. In September 1903 he married Eliza "Lizzie" Skitt, who worked as a warehouse girl in a Walsall iron foundry and they had four children. Despite mining being a reserved occupation and Richard being exempted from military service, he enlisted in the British Army in January 1915 joining the South Staffordshire Regiment. He saw two and a half years of active service and was killed in action in the trenches on the night of 21st October 2017. He is buried at the Philosophe British Cemetery in Mazingarbe, France.

Am I alone in thinking that Richard wouldn't look out of place in Peaky Blinders?
An extract from this war diary records Richard's death.

2nd Lieut. Jukes and Webb and 15 other ranks patrolled into the enemy's front trench, but not realising their advantage, failed to make the best of it. 2nd Lieut. Lindop on patrol further south failed to find a gap, and lost Sgt Hartshorne - killed -  a good and plucky NCO., who is a loss to the battalion.

Wouldn't that make a great plot for a thriller...an excess of free time due to lockdown leads the protagonist to develop a passion for genealogy. On discovering their heroic ancestor was killed due to the ineptitude of a superior officer they decide to trace his family tree and avenge his death by hunting down and punishing his surviving family. I've obviously been reading too many crime novels! 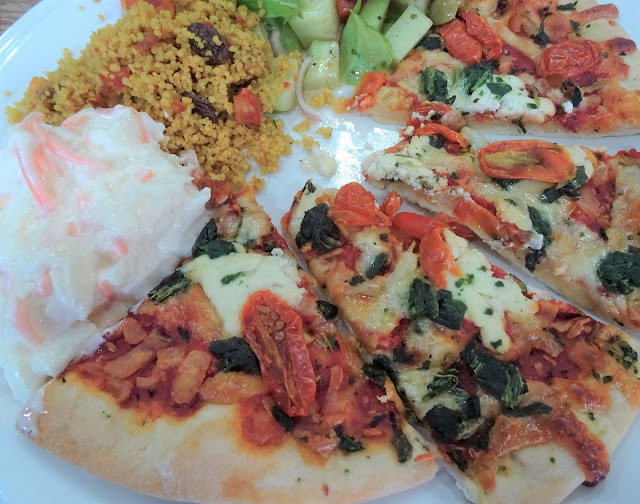 Tea was pizza and salad and the evening was spent watching Waking The Dead although I was nodding off by 9pm. I was in bed by 10pm, tucked up with Stephen and my latest read. 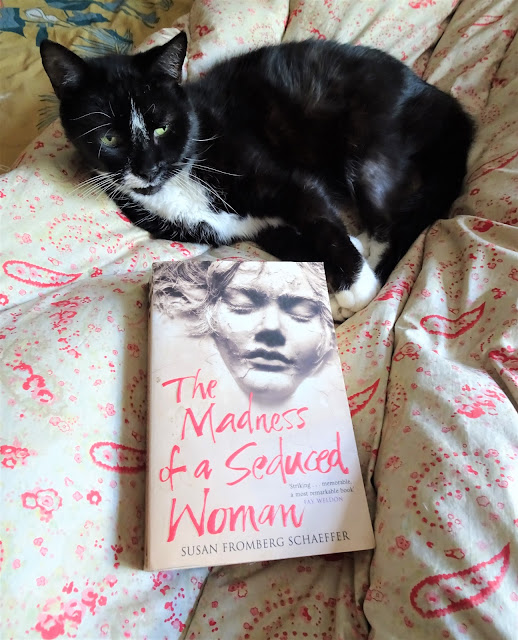 Glorious sunshine greeted me when I got up on Wednesday morning. Frank and I went for an inspection of the garden before my Wii Fit Workout. I sprayed the houseplants in the lounge and joined Jon for breakfast. There was much excitement as we'd decided that today was the day we'd go proper charity shopping - driving to a nearby town with a profusion of high street chazzas - as opposed to popping into the clearance shop in Walsall. 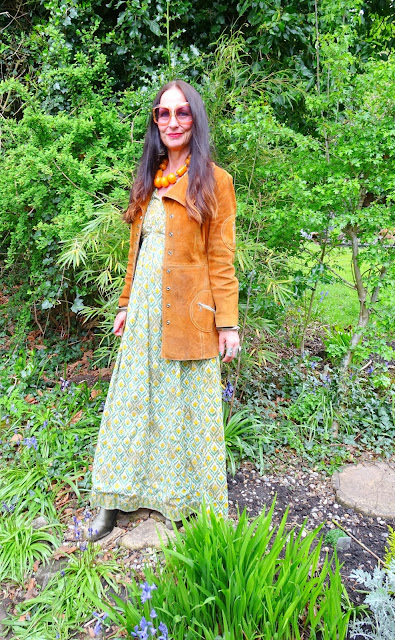 Jon had received a text to confirm that the bench I'd ordered at the weekend was out for delivery so I posed for an outfit photo while we waited. Keen to wear the copal beads I'd found on Sunday's charity shop expedition I wore a 1960s Dagina Indian block printed cotton maxi dress (eBay, 2018) to pick up the yellow. I'd not worn this vintage suede jacket since End of The Road Festival in 2018 and, the smell of damp was dreadful but I figured that everyone would be wearing masks so they might not notice. 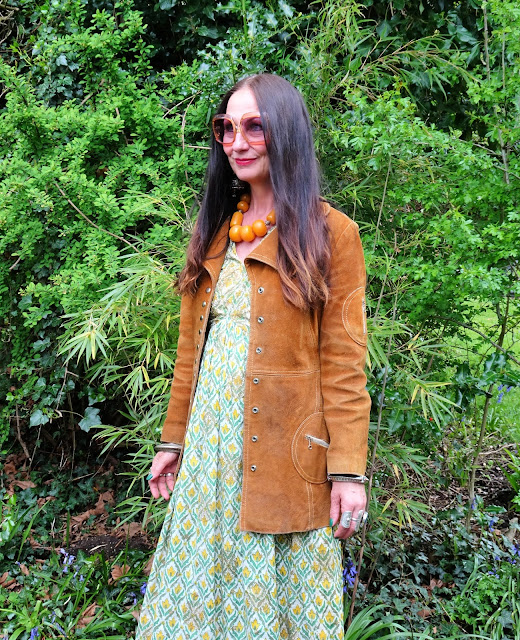 The bench was delivered bang on the estimated delivery time so off we went. We'd not been to our favourite charity shopping town since March 2020 (I'd tell you where it is but then I'd have to kill you) so didn't know what to expect. To our delight, the free car parks were virtually empty and, even though mask-wearing is only mandatory inside, just like in Walsall, almost everyone opts to wear them in the street. We've been spoilt with the supermarket-sized charity shop we normally visit and were wary of how busy shops would be but there was a strict limit on customers so it was absolutely fine. There were hand sanitising stations in each shop we visited and we didn't encounter a single non-mask wearing shopper. 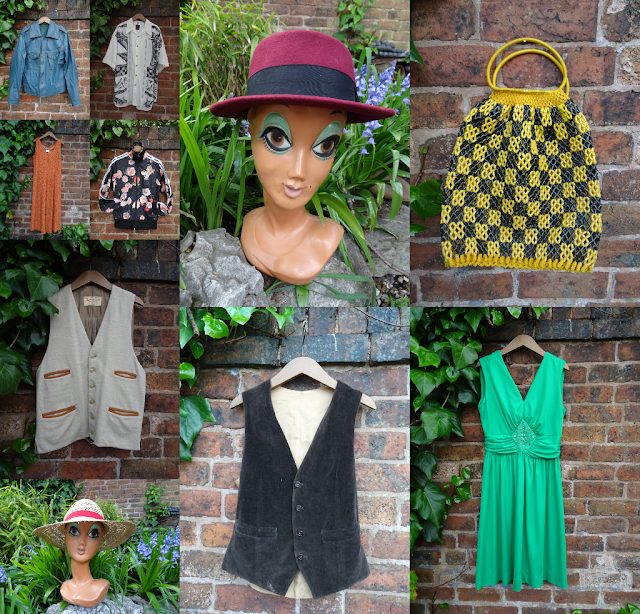 Having only my own wardrobe and the Kinky Shed to play in for over a year it's easy to forget how poor quality most modern clothes, shoes and bags are. We managed to find a few gems amongst the dross - 1970s reversible suede & leather jacket, 1980s gents leisure shirt, 1980s Nightingales crinkle cotton sundress, Adidas Originals Firebird Rose trackie top, 1980s wool felt fedora, 1960s beaded shopper, 1970s emerald green cocktail dress, 1970s cotton velvet waistcoat, 1950s London-made waistcoat and a Santelli Francesca, Italian-made straw hat with the tags attached which was sold at Anthropologie for, no doubt, a hideously over-inflated price.

Back at home, I bunged everything in the wash and we had a bowl of noodles. We changed into our gardening gear, filled the car with garden waste and deposited it at the council tip then spent the rest of the day in the garden. I edged the lawn, Jon erected the new bench (FSC certified, the eucalyptus wood is from an environmentally responsible supply). Yes, we do machine wash leather and suede!

Jon mowed the lawn. I know it's No Mow May but our garden been no-mow since September 2020. He's left plenty of clumps of grass where wildflowers grow in abundance so hopefully, we haven't upset too many creepy crawlies & pollinators, although if it gets rid of any lingering ticks we'll all be happy! 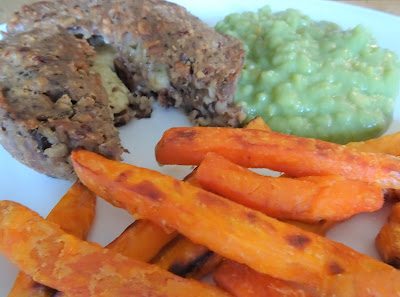 After tea; sweet potato chips, a three-cheese melt and mushy peas for me, fish, chips & mushy peas for Jon, we took a bottle of beer outside and sat on the new bench in the evening sunshine. It's The Great British Sewing Bee & rum later and tomorrow we're off on a National Trust visit, ticks permitting!
Cheers & see you soon.
Posted by Vix at Wednesday, May 12, 2021

Email ThisBlogThis!Share to TwitterShare to FacebookShare to Pinterest
Labels: Block Print, Books, Charity Shopping, Family, Gardening, It's All About Me, Jon, Outfit, Pets