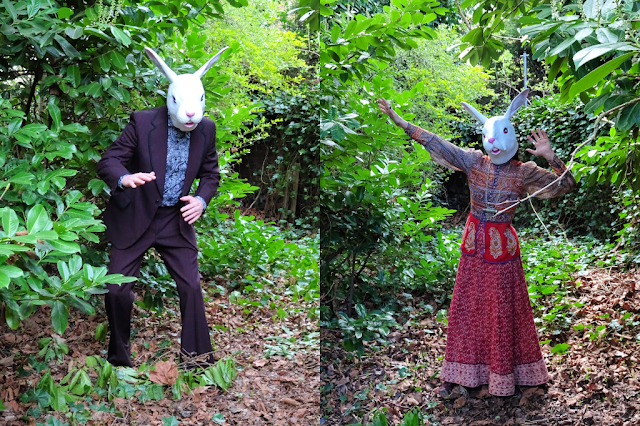 The weather had reverted back to the usual dismal, cold and gloomy Spring we're more used to when I got up on Thursday morning. Thanks so much for the Never-had-a wedding anniversary wishes, the amazing virtual card (Catmac!) and many congratulations to Mary (30 years), Martha & Carole R (31 years on 2nd May), too! 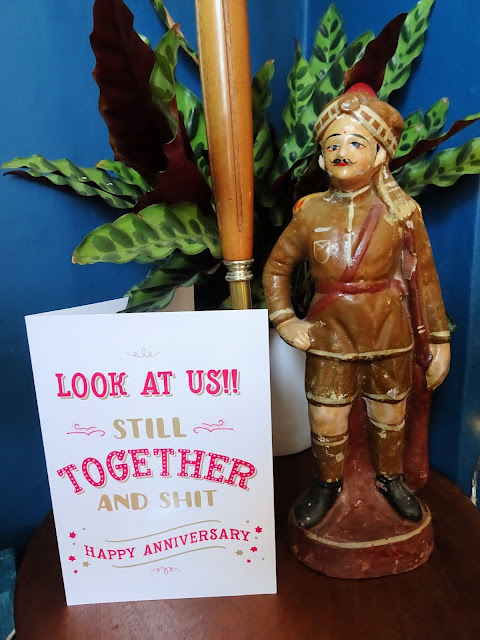 After my Wii Fit workout, I swept the rugs in the lounge and wrapped my eBay sales. After breakfast, Jon did the post office run a day early and called into the supermarket before popping round to Tony's for a coffee in the garden. I tidied the spare room, putting my bikini tops back in the summer suitcase and kicking it back beneath the bed, then and caught up with blogland. 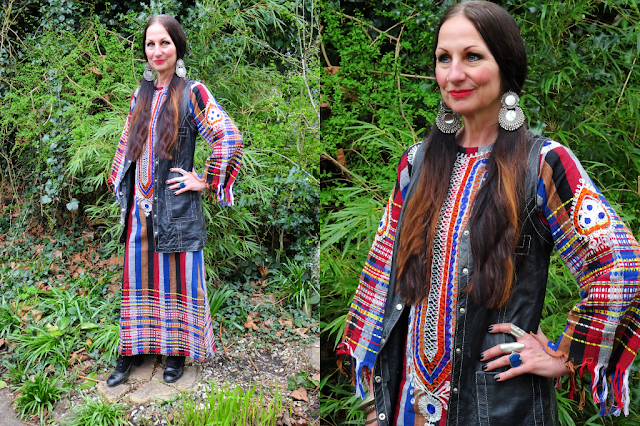 A first outing for the unworn £8 1960s embroidered kaftan I'd won on eBay last week and had spent Friday morning altering. It's made from that deliciously thick Indian homespun cotton (Gandhi's cloth!) and combined with my bodysuit, Cheryl's vintage leather jerkin, 80 denier tights and lace-up boots it was lovely and cosy - what a difference to the bikini top and factor 30 I'd worn the previous day. 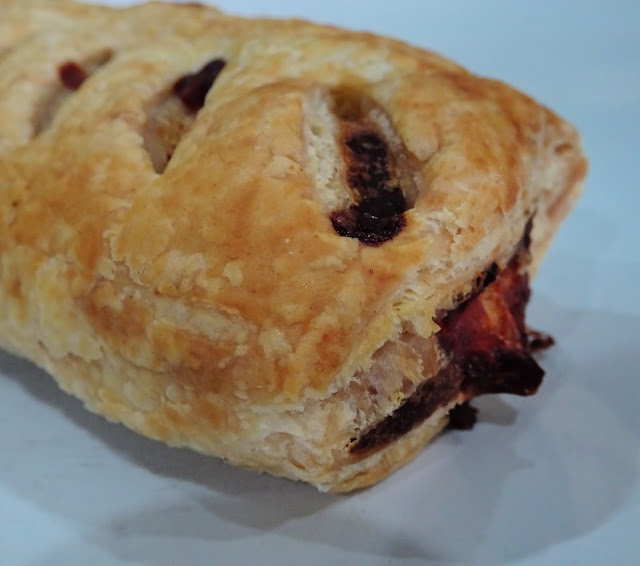 We had a potato, cheese and onion roll for lunch and while Jon played around with Gilbert in the cold, I stayed indoors and embroidered another couple of craftivism banners. 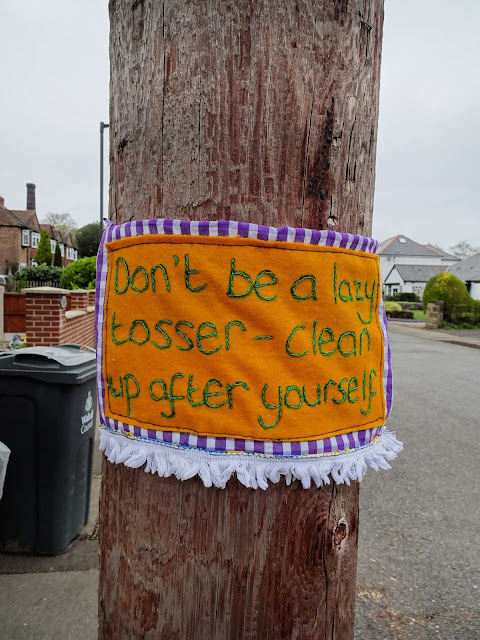 Once I'd finished my sewing we donned our big coats and went out for an hour's sign-bombing and litter picking. A girl in her late teens even stopped and asked if I'd like any help, which I found really sweet. I'd have been happy picking for longer but Jon had come out without his hat and his ears were starting to fall off. It was so chilly that we could even see our breath! 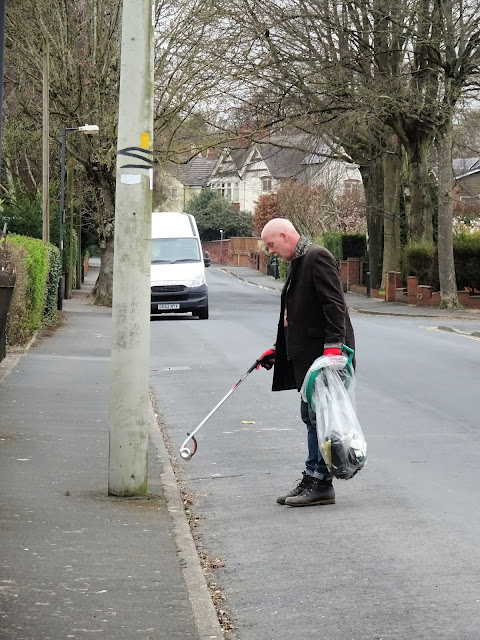 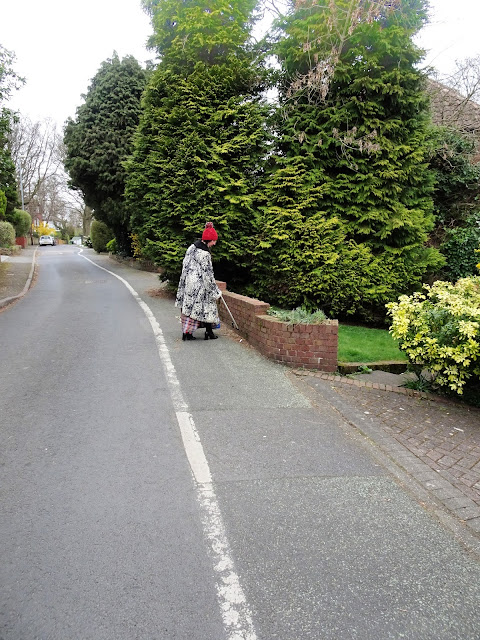 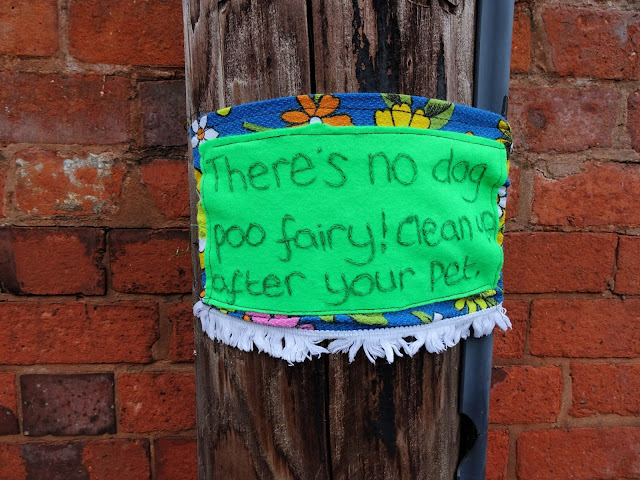 We managed to gather half a sack each, the contents mostly being discarded bags of dog sh@t, energy drinks, masks and sweet wrappers although I also retrieved a stained school sweatshirt someone had tossed into a bush. We do celebrate our anniversaries in style, don't we? This time last year I cleaned the kitchen! 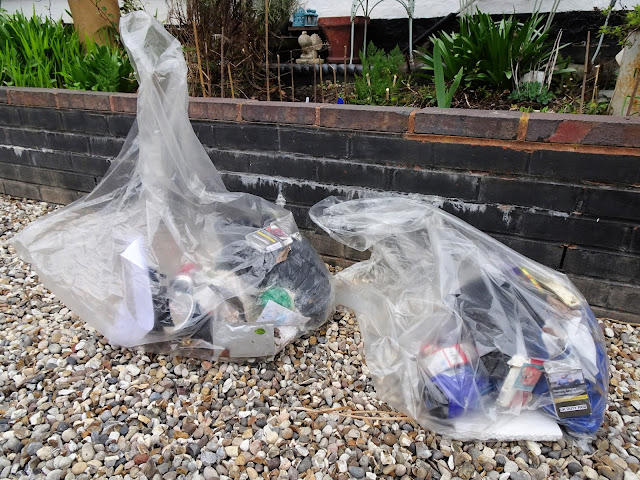 I'd found someone selling crowns of Victoria rhubarb on Facebook and messaged her asking if I could buy a couple from her. It turned out that she lived near Liz & Al (and was also a member of the litter volunteers) so we arranged to call round tomorrow before visiting Liz & Al.  On the subject of gardening, my Dahlias have sprouted, I can't wait to watch Gardener's World on Friday and see how Monty's are doing. 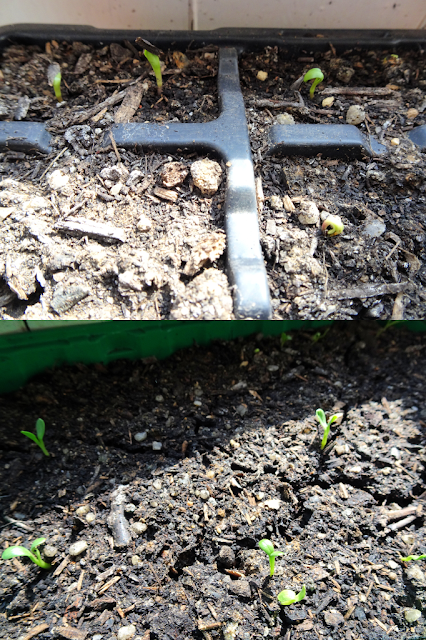 Tea was a vintage cheddar cheese quiche with salad. Later I cracked on with some crochet. Gill, who I regularly chat to on Facebook, had mentioned a new series of Italian thriller series Thou Shalt Not Kill but when we investigated further I realised that we'd only watched a couple of episodes before abandoning it as we weren't keen so stuck with what we liked and watched Waking The Dead instead. 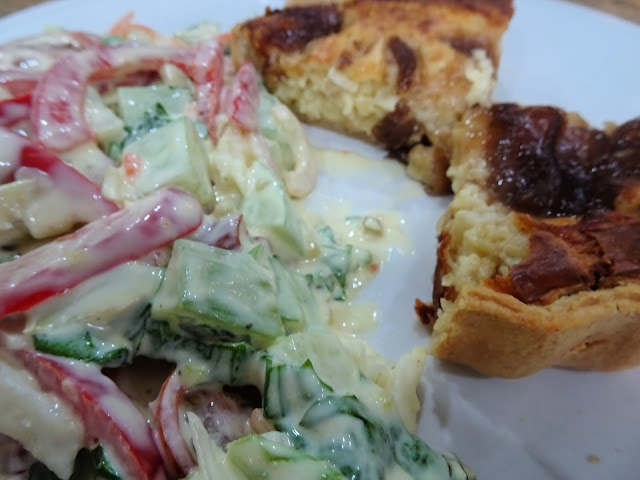 On Friday morning after I'd seen to the lads, I booked a National Trust visit - the first since the instruction to stay local was introduced back in December. The garden we're visiting is only 45 minutes down the road but it already feels like an epic adventure. I did my final Wii Fit workout of the week, misted the plants and had breakfast with Jon.

Being atheists we don't do Easter and the only time you'll ever hear me exclaim He has risen! is when Jon gets out of bed before 8.30am. I do love the dapper rabbit on the delightfully daft Aldi advert who dances around to the 1967 Latin boogaloo tune, I Like It Like That by Pete Rodriguez so we decided we needed to recreate it in our own inimitable way. 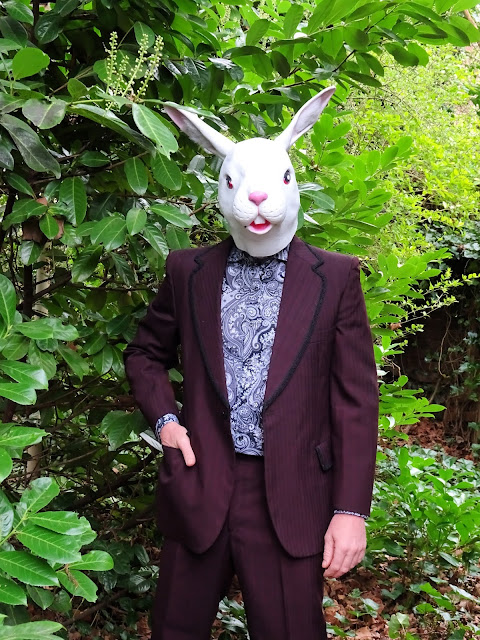 My dapper rabbit is dressed head to toe in his charity shop finery (a vintage Mr Harry dinner suit and a Hawes & Curtis paisley shirt). 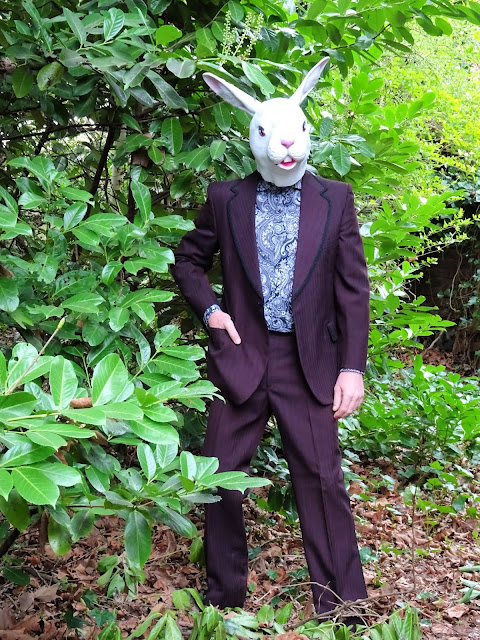 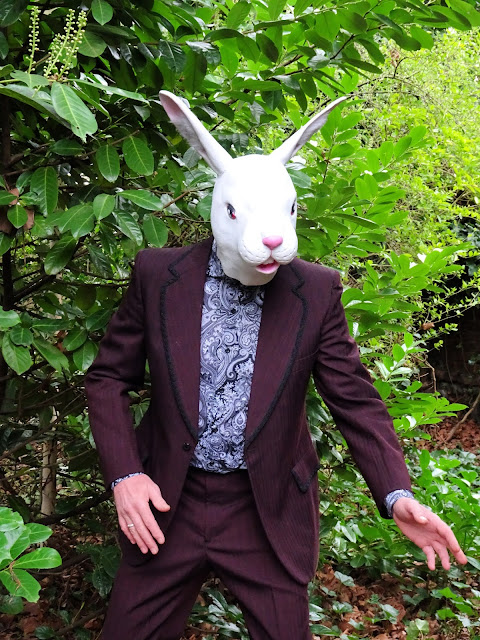 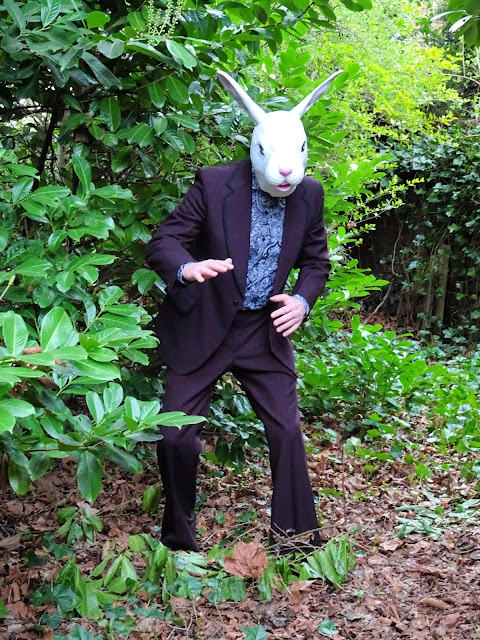 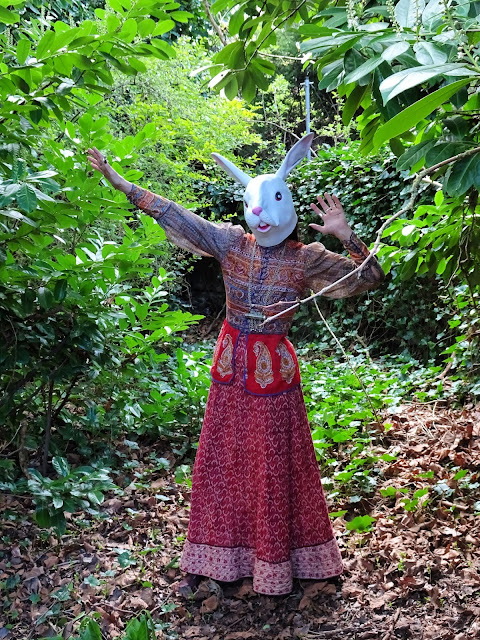 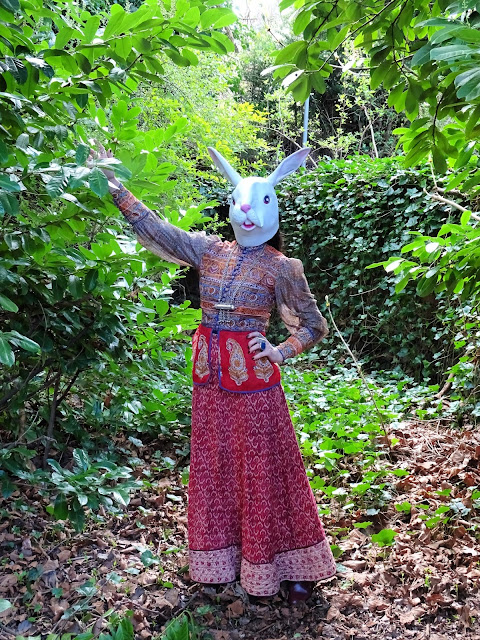 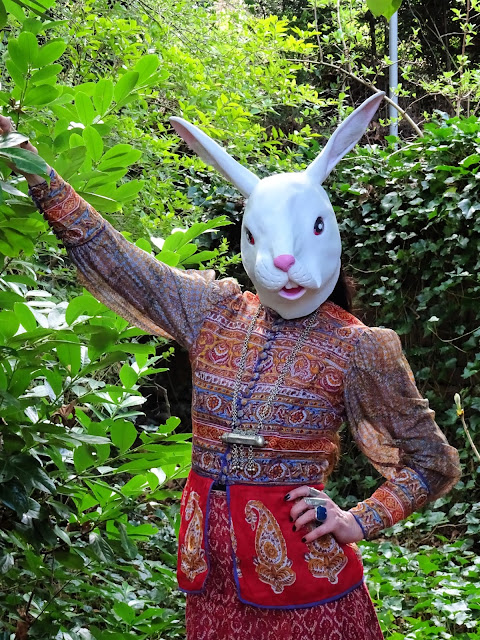 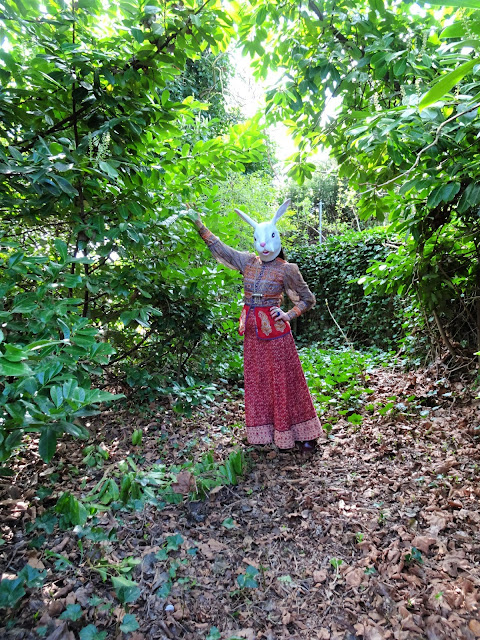 I've no idea why our neighbours think we're a bit strange. 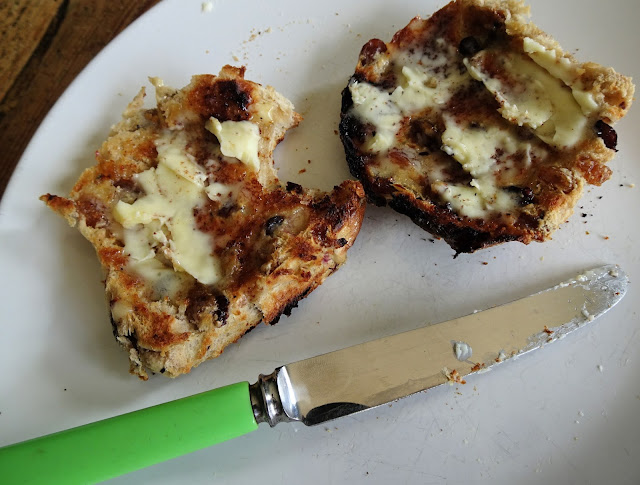 Keeping with the Easter theme we had hot cross buns for lunch, the first in over a decade. They were slathered in butter and utterly delicious. 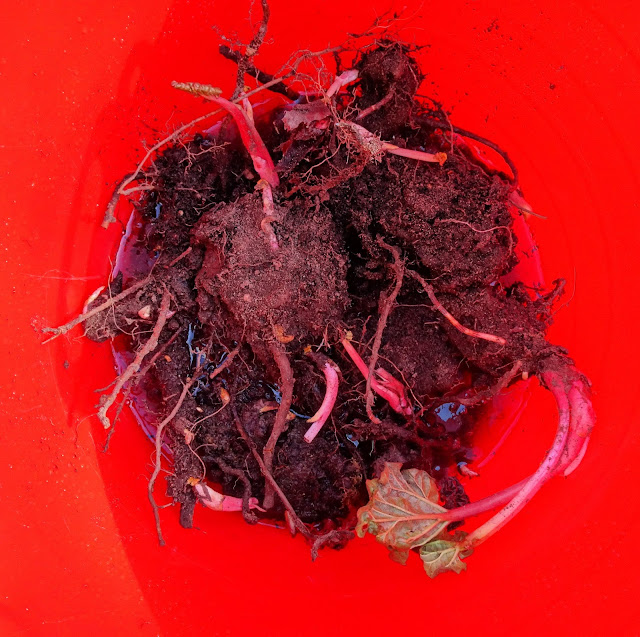 We took Gilbert for a run, picked up the rhubarb which the lovely seller had left in her porch for us along with a handwritten note with planting tips. It had been ages since we'd been out in Gilbert and I'd forgotten how visible we are in him, I love that everyone waves at us and gives way. 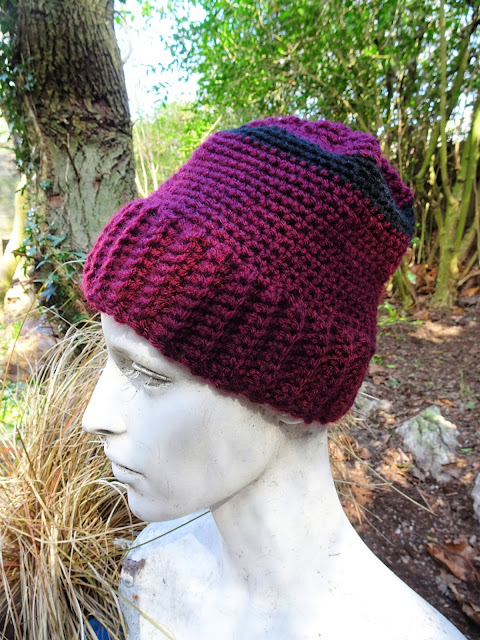 Liz and Al were delayed and came round to ours instead. Al was the recipient of last night's crocheting - I hadn't forgotten the pom-pom, he's just not keen on them. The sunshine had finally made an appearance although it lacked the heat from earlier in the week. Our magnolia has finally burst forth - I'm just waiting on the tulips now! 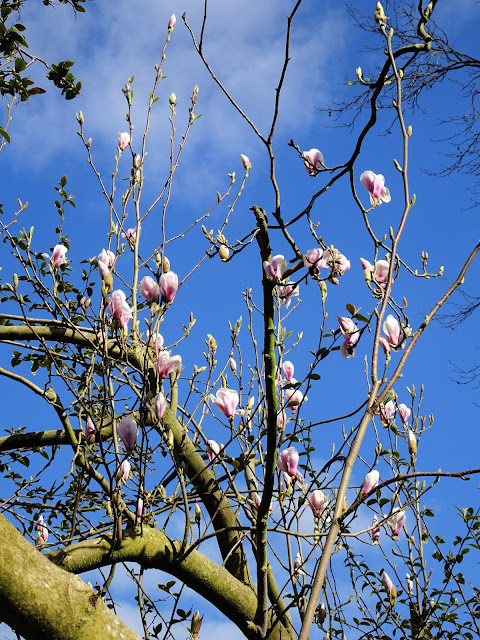 Tea was wine (we abstained yesterday) with pizza and blinged-up jacket wedges. Tonight we'll be tuning into Gardener's World, drinking rum and trying to stay awake later than 10pm. 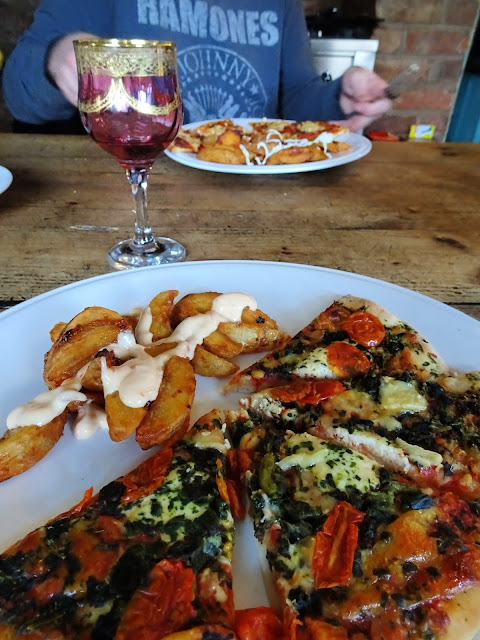