On Thursday morning after my Wii Fit workout I watered the plants in the lounge and polished the floorboards. I was just finishing replying to blog comments when Jon got up and we had breakfast. Once dressed we took our grabsticks, sacks and gloves and headed out for some litter picking. 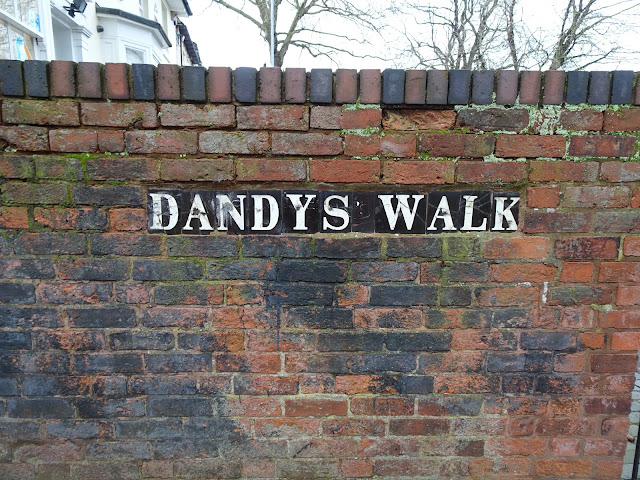 Last time we'd cut through the Georgian alleyway, Dandys Walk, we'd been disgusted by the amount of litter so had decided to do something about it. 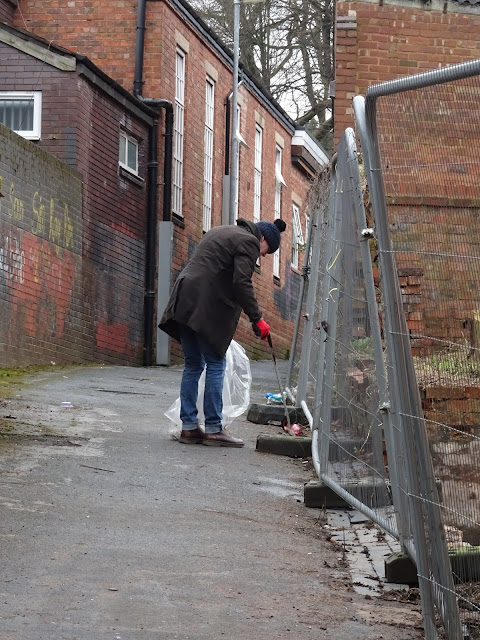 By the time we'd reached the top we were loaded down with fag packets, vodka bottles and beer cans, not to mention the ubiquitous nitreous oxide cannisters. Sadly we couldn't do anything about the piles of dog sh*t, which have increased a hundredfold since last year. It's bad enough having to pick up bags of the stuff that owners have helpfully hung from trees and suspended from gate posts. 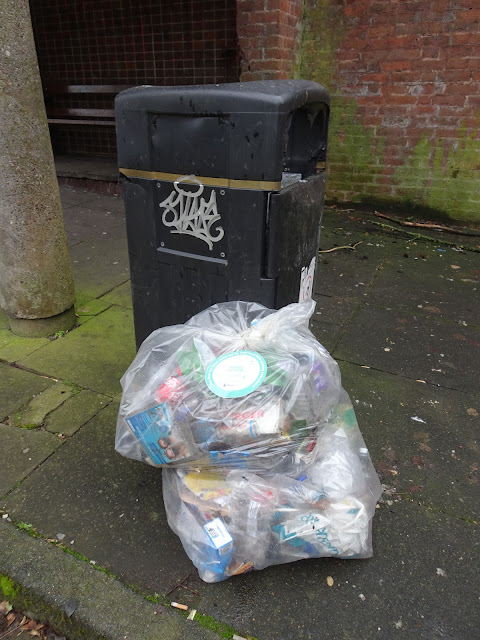 We deposited our two sacks next to the council bins on Church Hill pleasantly surprised that the area had remained litter-free since our epic pick last Sunday. 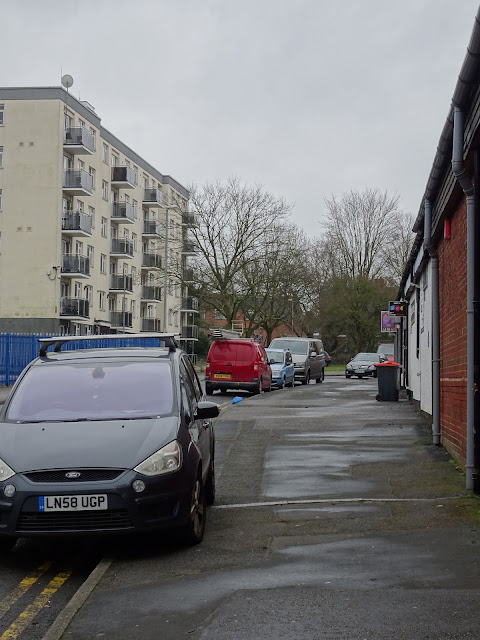 Next was Sandwell Street, the main road that links Highgate (where we live) to Church Hill. A crew of Bangladeshi workers from the tandoori oven factory stopped what they were doing to watch us in astonishment, back at home cleaning the streets is a job for dalits, not priviledged Westerners. We were thanked profusely by both the employees and their boss - now they can sit outside during breaktime without being surrounded by discarded takeaway wrappers and empty cans of lager. 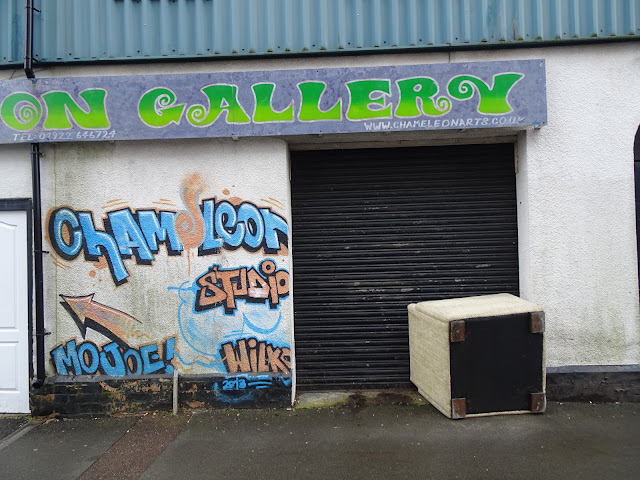 We usually have to dodge old fridges, stained matresses and knackered furniture along this stretch of pavement but today all we encountered was a solitary armchair. As we were carrying our sacks home the binmen spotted us, stopped their wagon and took our rubbish from us, saving us having to pile it in the garden for a fortnight. Back at home I emailed the Clean & Green team at the council to let them know about the chair and the location of our two sacks of rubbish. 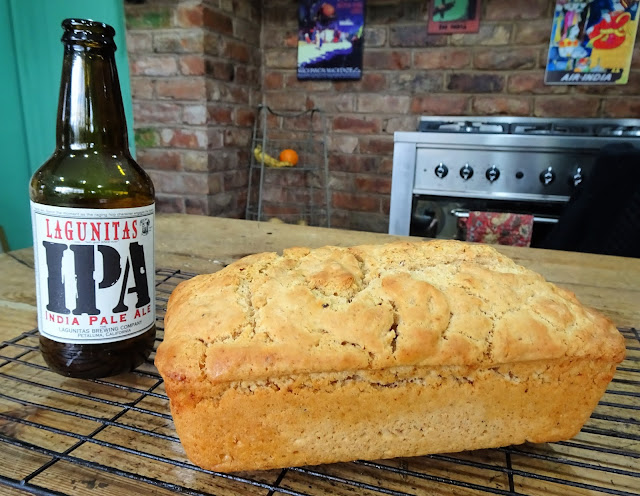 After our lunchtime noodles Jon cleared the greenhouse & surrounding patch of ground ready for planting whilst I baked a beer and chilli loaf. It was such a dismal day I thought I'd cheer myself up by ironing, photographing and listing some colourful shirts on eBay. A charity collection bag had been dropped into the postbox earlier so I had a bit of a clear-out of the stockroom, donating a pile of items that were okay but didn't photograph well. 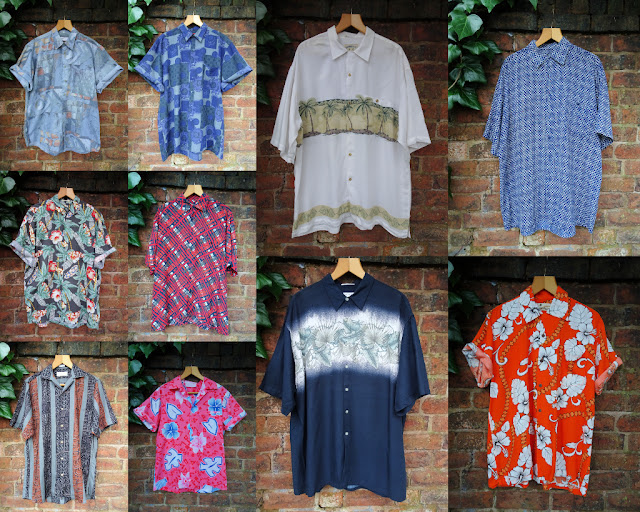 Wear:Sleep:Repeat meant another outing for the India Imports of Rhode Island maxi dress I'd worn on Wednesday, this time with an embroidered poloneck from East (new, retail), a me-made pompom hat and a 1960s leather jerkin from Cheryl's clearout. 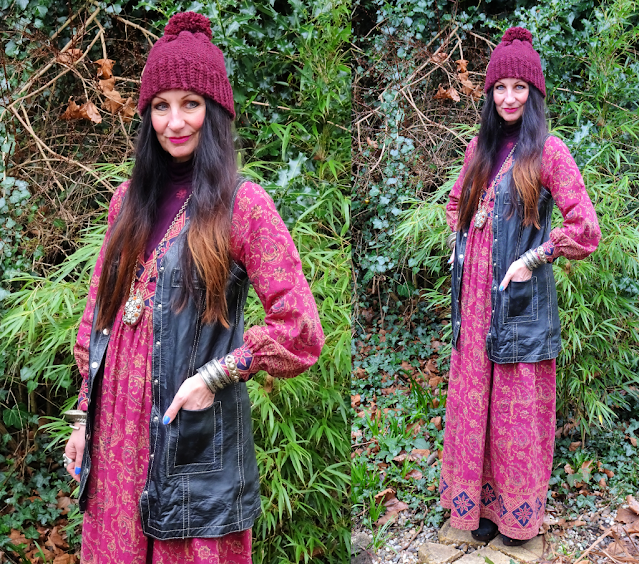 Back in the 1980s I had a near identical jerkin which I'd fasten up and wear over black fishnets and fetish boots to go out clubbing in. I suppose I could still wear it as a dress if I wanted to (I'm the same size) but my aethetic has changed, it's nothing to do with age or body confidence, it's just that I no longer feel like "me" in a mini. 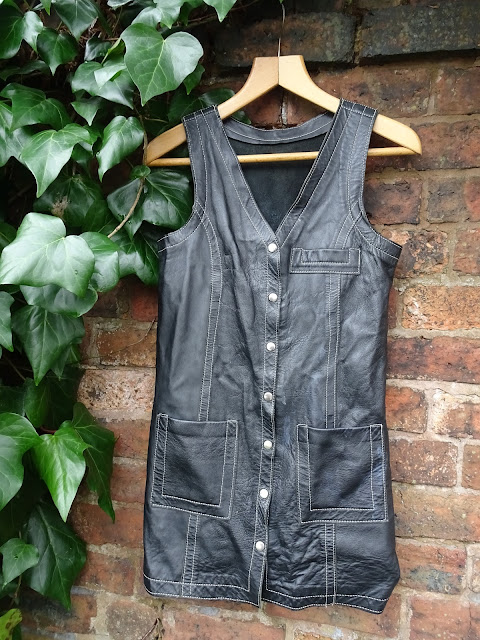 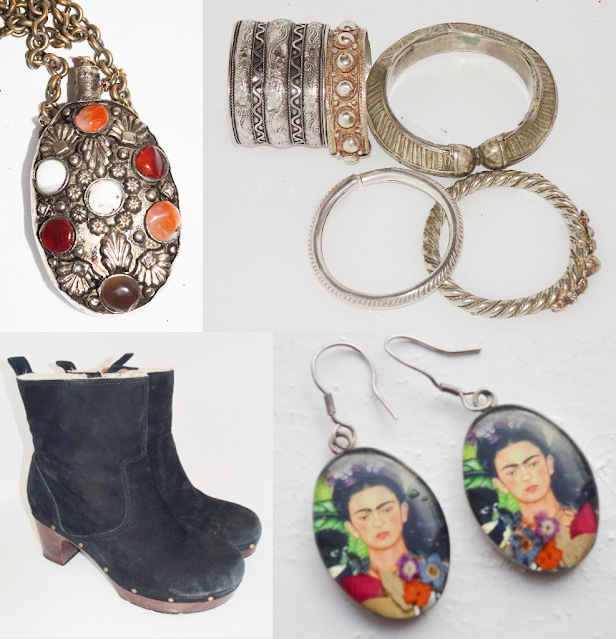 The vet called with Stephen's results, she's very pleased with his thyroid count and other than a bit of tartar build-up on his teeth he's in great shape for almost 16 year old cat. I also had an email confirming I was booked into the hairdressers with Keri on 23rd April...a date for the calendar.....yipee! 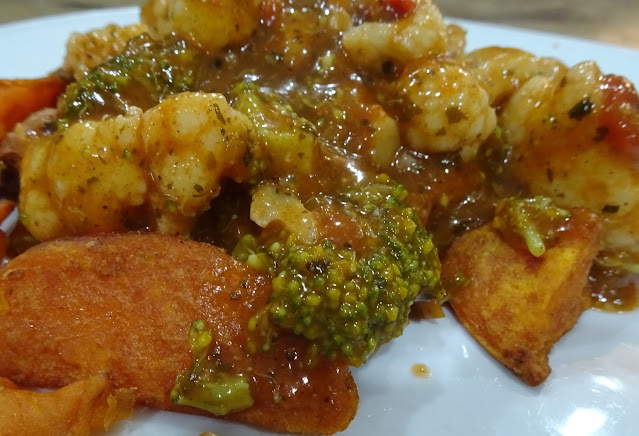 Tea was a califlower and broccoli balti served with some oven-roasted sweet potatoes. We watched the rest of the BBC's Finnish Noir, Man in Room 301. I'd guessed the true identity of Ellias, the wronged child, in episode one. As a series it was okay but nothing to write home about. 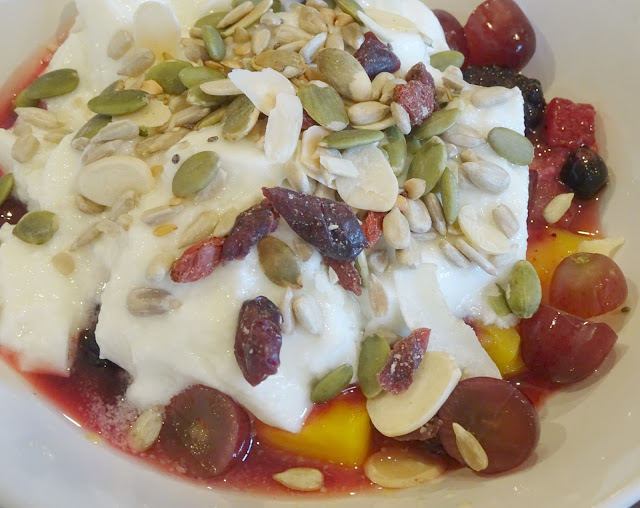 On Friday morning I did a load of washing which I hung to dry in the utility room, dragged the sack of charity donations to the kerbside ready for collection (it was, 30 minutes later), did the last Wii Fit workout of the week and wrapped the overnight eBay sales ready for Jon's twice-weekly post office run. 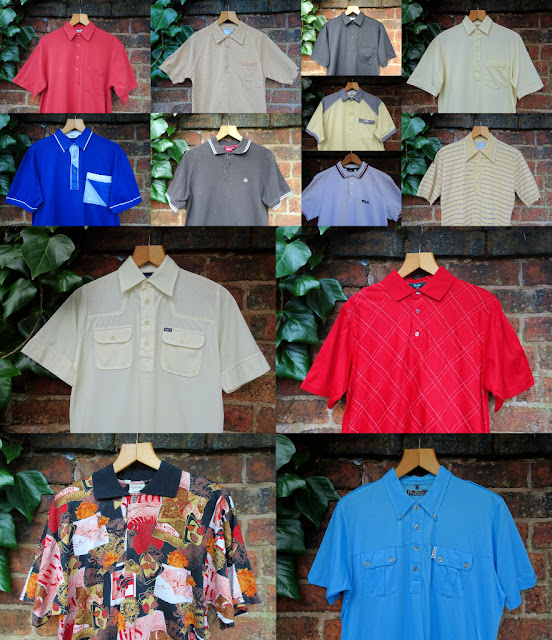 After breakfast I swept out the hearth in the middle room before getting dressed and heading outside to take stock photos (the theme being polo shirts). Meanwhile Jon did the post office run, dropped half of the beer and chilli loaf I'd made yesterday off at Tony's, called at the vet to pick up Stephen's prescription and did a grocery shop on the way home. I'd just finished uploaded my listings to eBay when he got back. 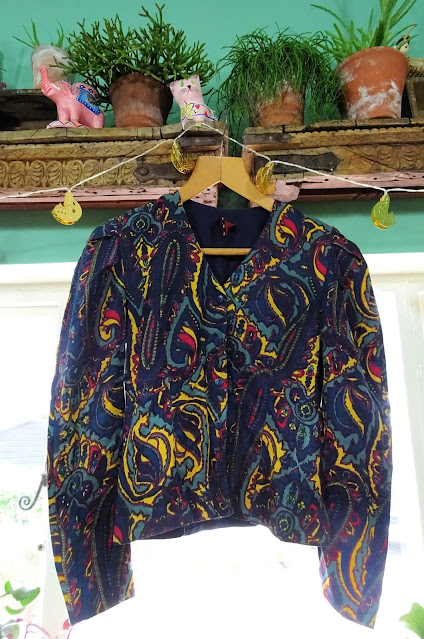 Izzy (Richard's on holiday this week) delivered some parcels, hoops for our litter picking and this vintage 1980s block printed Anokhi jacket I spotted listed at a bargain Buy-It-Now price earlier in the week. The seller had described it as a blouse but my suspicions were correct, its definitely a jacket. I did agree with her description of it being jewel toned though, I couldn't have put it better myself. After noodles, keen to test out my new hoop, I left Jon sorting out the washing line in the garden whilst I went on a solitary litter pick. I only intended to do our avenue but got carried away and ended up doing three neighbouring streets and two alleyways. Some scutter had left an almost empty whisky bottle on the kerb, the dregs of which splattered on my sheepskin coat, I smell like a distillery. 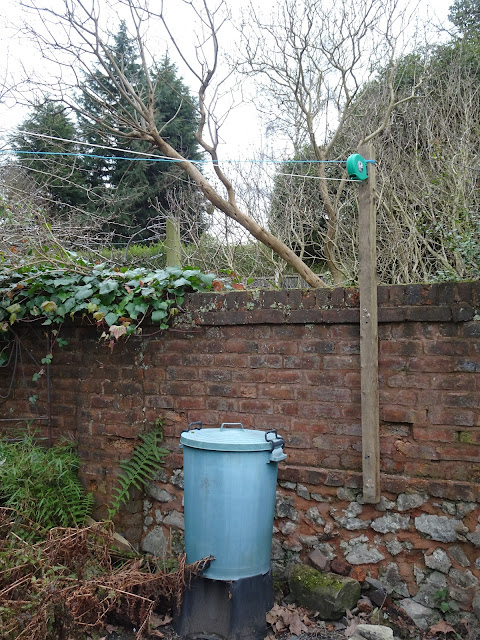 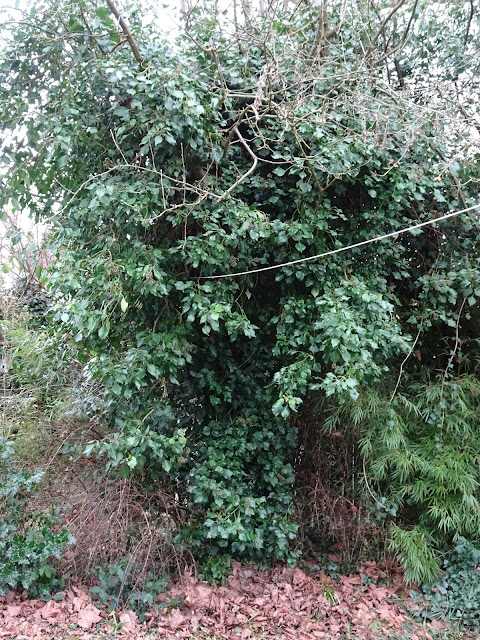 It might not look exciting but I'm thrilled with my new washing line Jon's managed to attach to the garden wall using some wood from his stash. Let's hope it's a good drying day tomorrow. 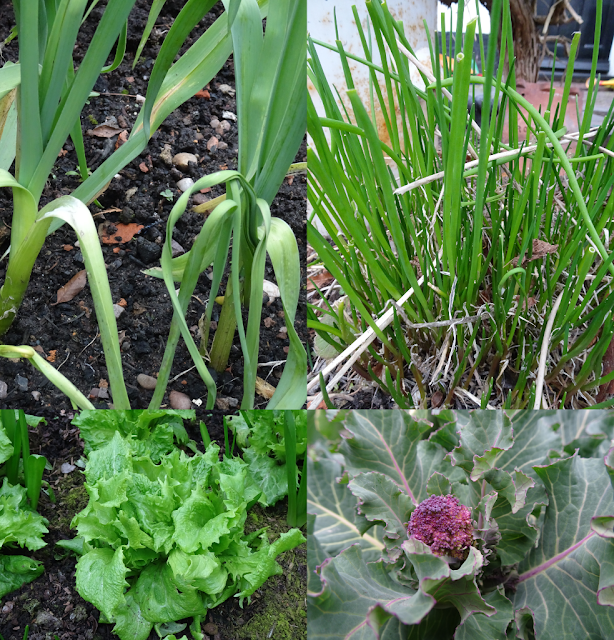 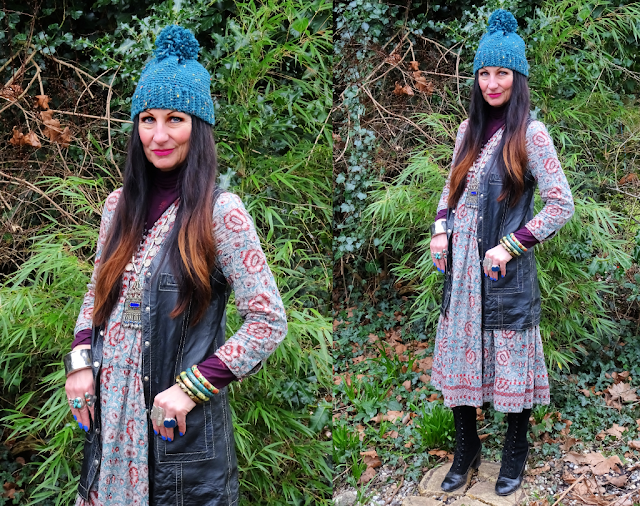 Wear:Sleep:Repeat saw another outing for both the leather jerkin & embroidered poloneck I'd worn on Thursday, this time with a me-made crochet hat and an Anokhi dress bought in Mumbai last February..here's me leaving the Chowpatti boutique and Jon looking after my goodies while we explored our favourite city. 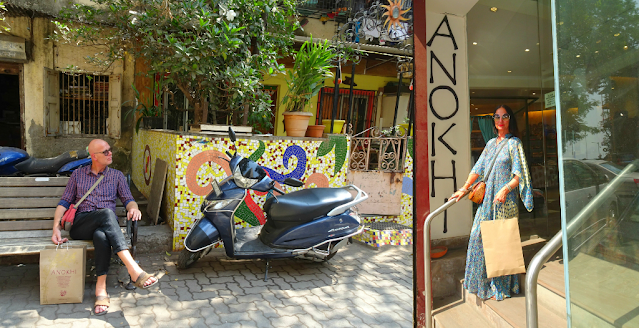 Much excitement in the house as the new series of Deutschland 89 kicks off at 9pm tonight. 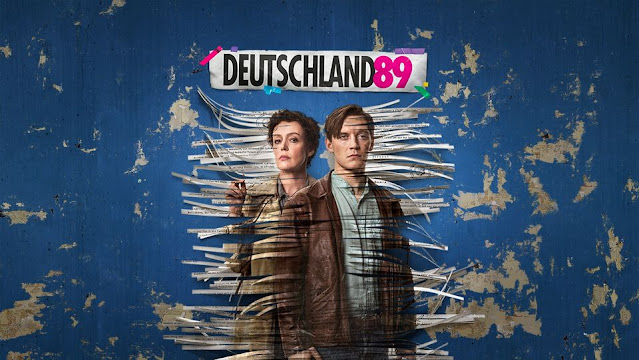 We've got rum & cola, there's a bowl of monkey nuts with my name on them and I've even printed off the lyrics so we can sing along to the theme tune, Major Tom (Coming Home) by Peter Schilling. 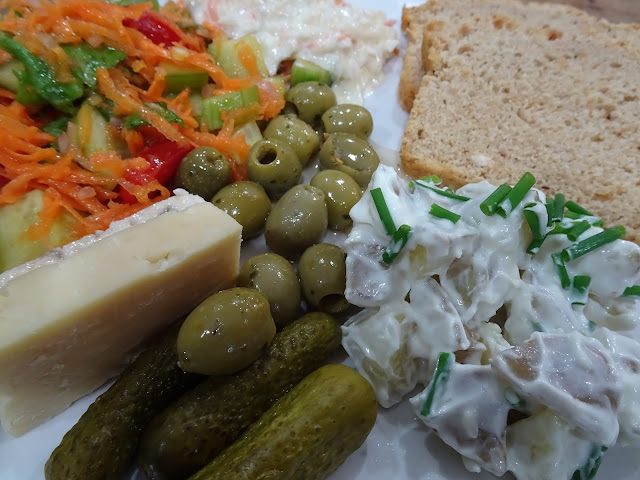 Tea was cheese salad with chilli and beer bread, olives & gherkins, my homemade potato salad (with chives from the garden),  and Reine des Glaces lettuce from the cloche. We had the government briefing on in the background but were too absorbed in our food (and the accompanying bottle of beer) to take much notice. 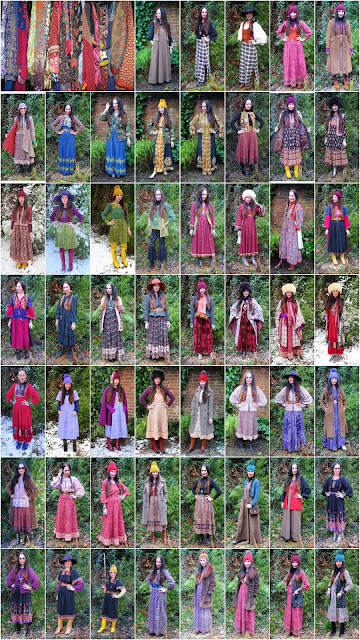 I'm now 54 days into my Wear:Sleep:Repeat challenge. Doesn't time fly?
Stay safe, enjoy your weekend (if you still have one) and see you soon!