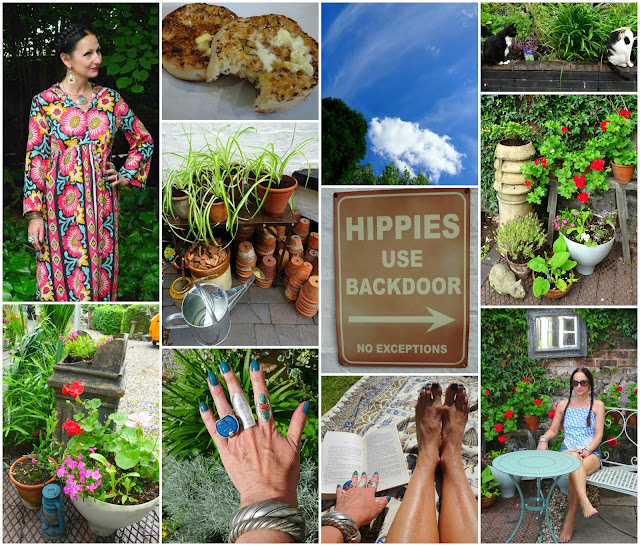 On Sunday (day 114)  the sunshine streaming through the window woke me early. I got up, let the lads out and sat outside basking in the warmth while the tea brewed. Is it just me or does everything sound different on a glorious morning, even the raucous call of the tailless magpie sounds sweeter? I took our tea back to bed and we read for a while before going downstairs for breakfast. 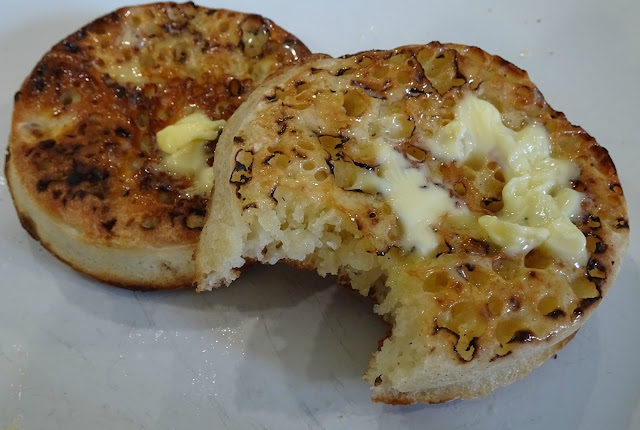 Jon remembered he'd frozen some crumpets a while ago so after I'd painted my nails we had those while watching the Andrew Marr Show.

After we'd eaten I attempted to catch up with blogland. I was heartbroken to read Tammy's blog, entitled Final Post, as she's been given the devastating news that she has pancreatic cancer. She writes Hugs to all, please stay safe. Life is worth living. I have been blessed with a full and wonderful life, a sweet husband, a family who loves me and a dog who is my constant companion, can anyone really ask for anything more? You'll have read the thoughtful comments she leaves on my blog and may well have popped over and visited her as her blog is in my sidebar. Although we've never met she's been a part of my life for many years and, like many of the women I've met through blogging, consider her a friend.

Please keep Tammy in your thoughts. 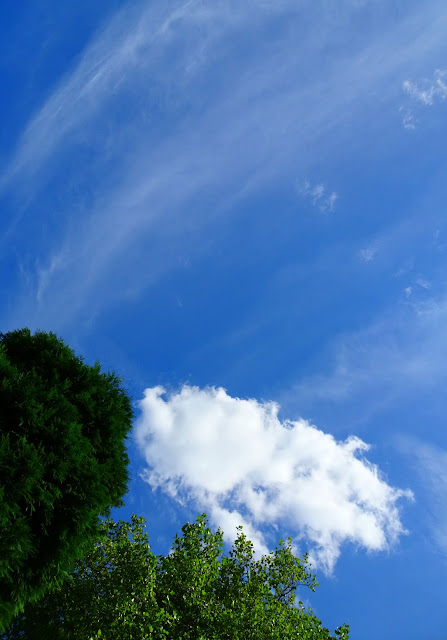 I switched off the PC and took myself outside. Jon had to pop round to Tony's to pick something up and I had a few things to occupy myself with in the garden, including setting up the free book pile outside the gates and deadheading the patio plants. I'd only been outside for a while when a chap in a campervan pulled up and told me he'd come to collect the blue bricks listed for sale at our address....eh? I asked him to double check as there's an avenue, drive, close and road all with the same name. After a chat about our VW campervans he continued on his way to the road address and not the avenue. 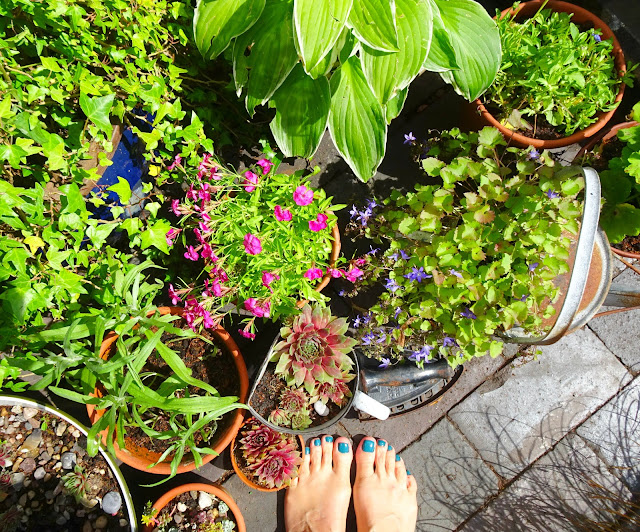 Next on the list was filling the chimney pots I'd emptied the previous day and had dragged over to the wall of mirrors. As they're hollow I needed to fill them before I added plants so I had a look through the rubbish pile for something suitable coming up with the polystyrene packing our kitchen lamps arrived packed in, broke it up and crammed it in.

I needed something to line the pots with & to contain the plant roots so I pulled one of the rubble sacks our gravel had been delivered in, cut it into smaller pieces, punched a few holes in for drainage. Keep something for long enough and you'll always find a use for it.

No need to go to the garden centre for plants as I'd already had my fix on Thursday. Instead I used a fuschia I'd bought from a car boot sale a couple of years ago and thought I'd killed in the Spring. Refusing to give up on it I cut it down, repotted it and a month or two later it sprung back into life. 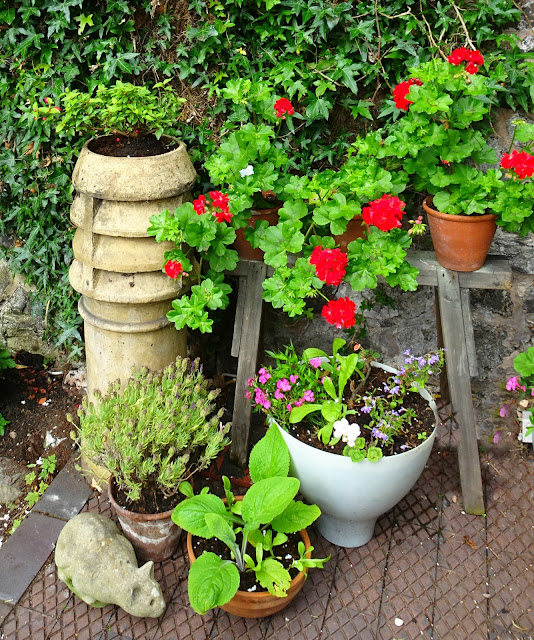 The Sweet Williams were on the clearance shelf in B&Q last Spring and despite being annuals, have been flowering constantly ever since. 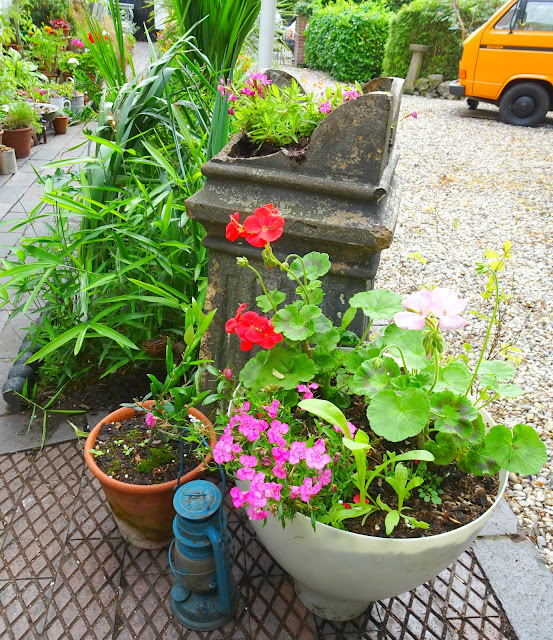 I was just sweeping up when a young women called over to me to ask about the books. I encouraged her to take as many she wanted and we started talking. She was under the impression that our house, which she passes every day wheeling her toddler in a pushchair around the block, was a commune and not a proper house. How bizzare! Not sure if it's the sign outside the front door or the fleet of campervans on the path. 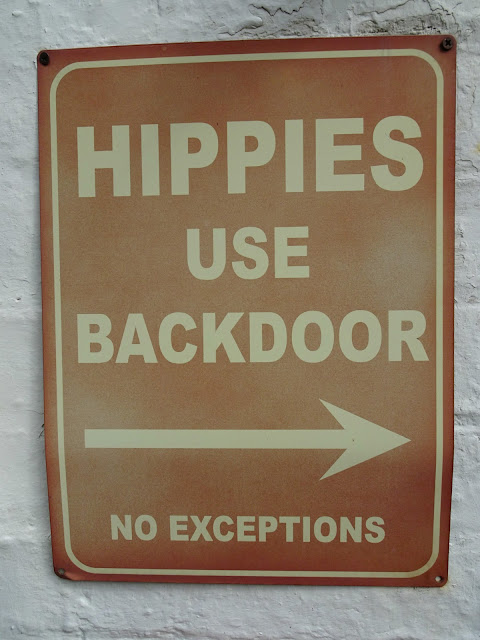 By now Jon was back, we had our lunchime noodles and, as the van's in for an MOT this week, he proceeded to work through the list to check everything was in order. Meanwhile I stripped off to my bikini and prostrated myself on the lawn with Sanctus, which I managed to finish and add to the book pile. 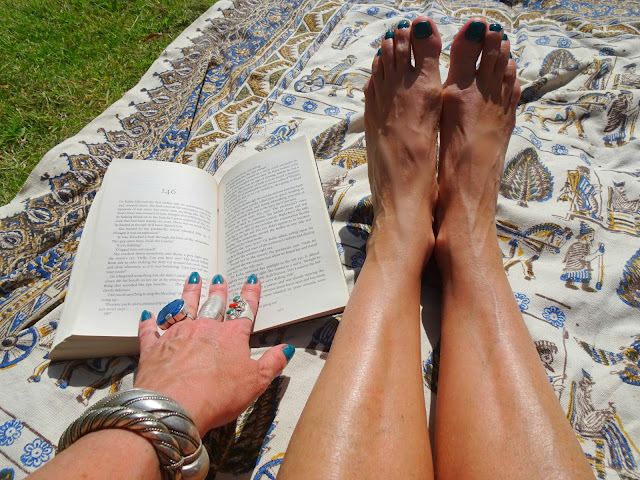 After watering the patio plants and veg patch we cracked open a beer and made the most of the late afternoon sunshine.

After tea (pizza with potato wedges) we watched Sicily: The Wonder of the Mediterranean  and The Lumineries. It's the final episode next week which I'm sad about as I've loved it but all is not lost, A Suitable Boy starts on the BBC in a fortnight, one of my all-time favourite books set in India!

Monday (day 115) was cloudy and overcast when I got up at 6.30am. After my Wii Fit workout I took a cup of tea up to Jon and scribbled down a list of stuff I needed to get done. 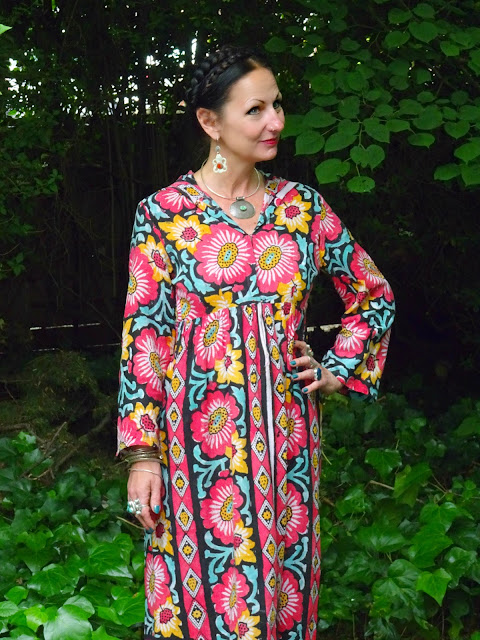 After our fruit & yoghurt breakfast I slathered my hair in conditioner & plaited it and pinned it on top of my head, slipped on my hooded kaftan and, ignoring the spots of rain, proceeded to get cracking with my to-do list. 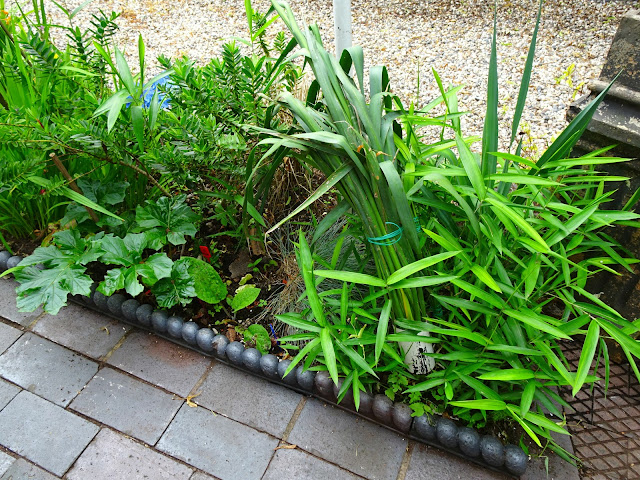 I cut back the bamboo threatening to engulf the bed below the lounge window, replanted the blue grass after I'd sheared off the brown bits, restaked the yukka & tied up the Oriental poppies, the heads of which were still too green to harvest the seeds. 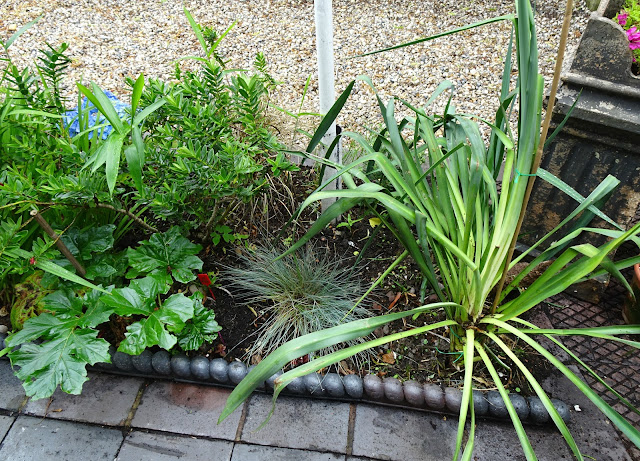 As my spider plant was getting enormous I removed it from the pot, seperated the roots and divided it up into seven smaller plants which I've split between the kitchen and the utility room. By now the spots of rain had become a full-blown shower so I retreated into the house. 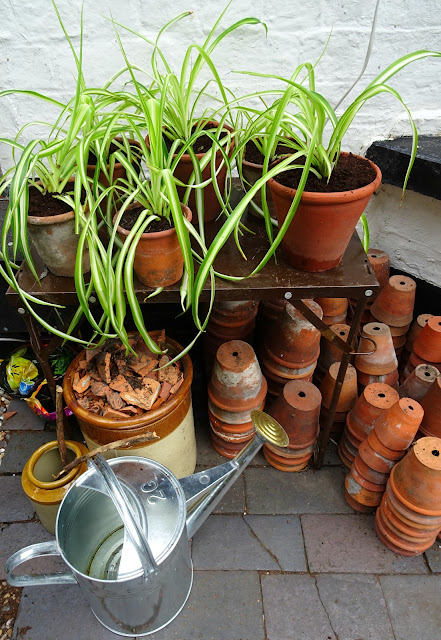 We'd just finished our lunchtime noodles when our neighbour, Florence, knocked the door, bringing with her one of Ray's freshly baked loaves and some poppy seed heads. Talk about good timing, one of Jon's tasks for today was to bake a loaf to take with us when we go on our National Trust visit tomorrow. 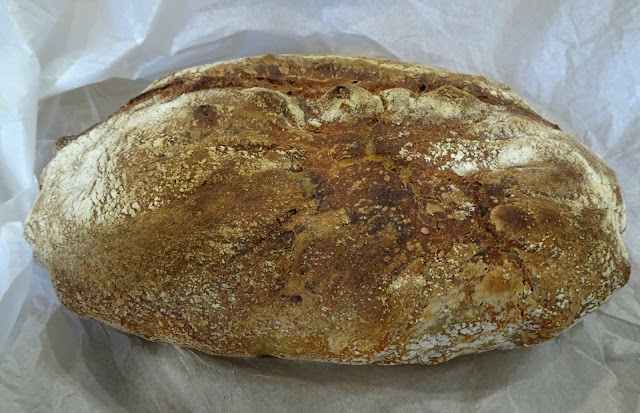 The heavy rain had reduced to a light drizzle so we were able to continue working outside, Jon cleaned sanded down the skirting boards he'd rescued from Liz & Al's woodpile on Friday which, once he's treated them for woodworm & painted, will be ready for fitting in the kitchen. I cut back the curry plant, moved a cat mint that was being overshadowed by the montbrecia, potted up a thrift and some camomile Jon had found in his pocket last week (don't ask, I don't know either) and experimented with planting cuttings taken from the rosemary bush. 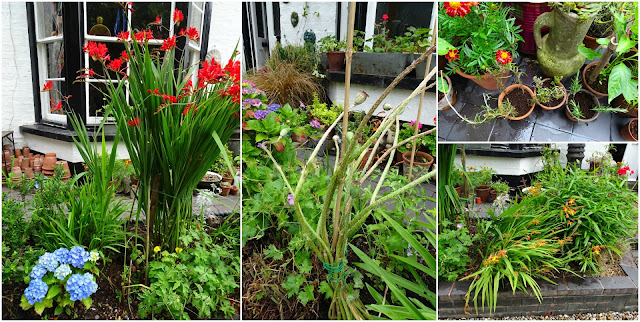 The border beside the wall of mirrors is known as The Last Chance Patch as, other than the nepeta, I plant things in it that are on their last legs. There's two of the Dusty Millers rescued from the window boxes, a bit of the wild geranium we'd split up months ago, spiky bastard (which has gone from strength to strength), a dried-up thing in a pot which has morphed into quite a pretty climber with tiny pink flowers, a shrub with yellow veined leaves I'd rescued from a crack in a wall on one of my walks around the block and two house ferns from B&Q's clearance shelf last year that are half dead. 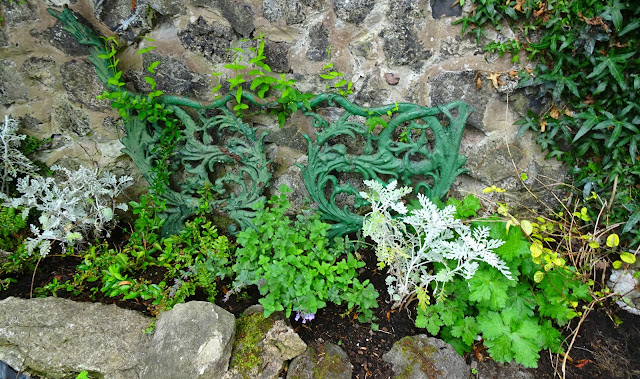 I've no idea what these two were up to today but I'm happy to report that they observed social distancing throughout their adventures. 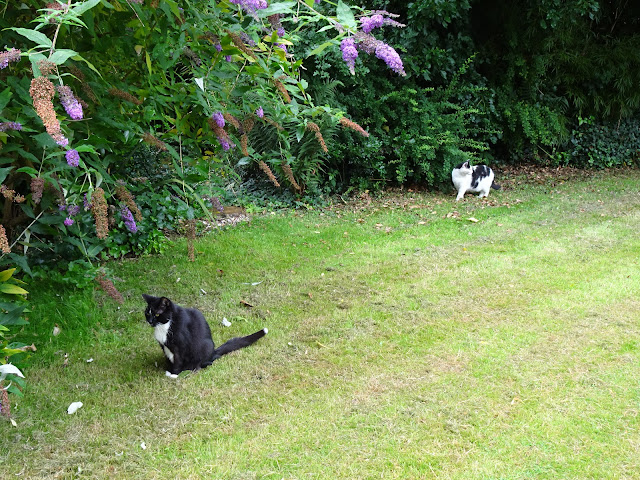 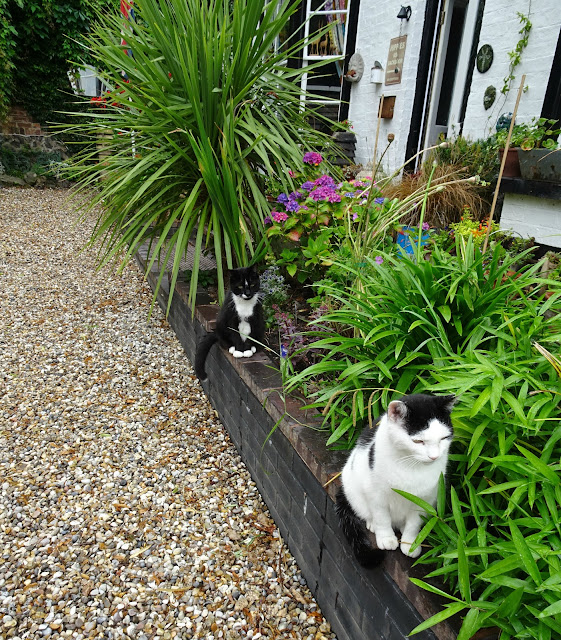 By 3pm, somewhat damp but with all our jobs ticked off the list we retreated to the house. After I'd mopped up the trail of muddy footprints we'd left in the hallway and polished the side table, we rewarded ourselves with a posh coffee. 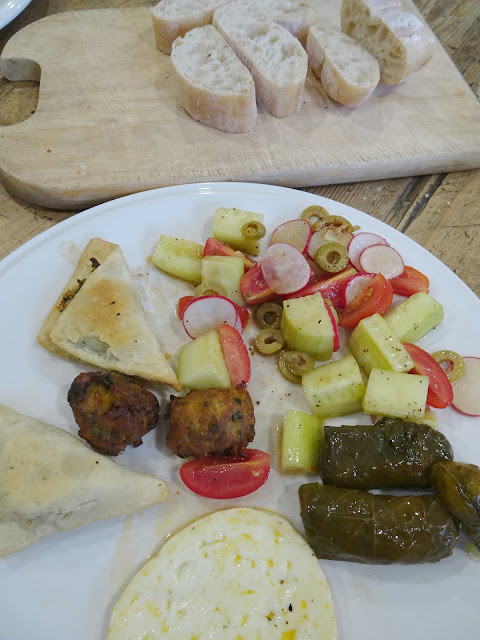 Tonight we'll be watching the second instalment of Sicily: The Wonder of the Mediterranean and a couple more episodes of Mrs America and I'll be reading my 36th book of the year in bed. 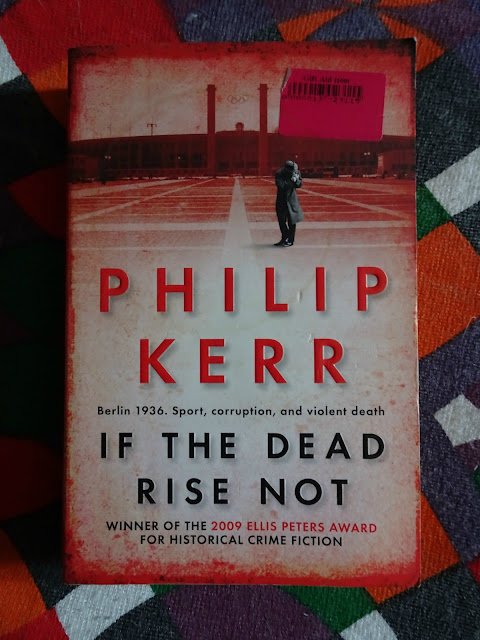 Email ThisBlogThis!Share to TwitterShare to FacebookShare to Pinterest
Labels: Books, Gardening, It's All About Me, Pets