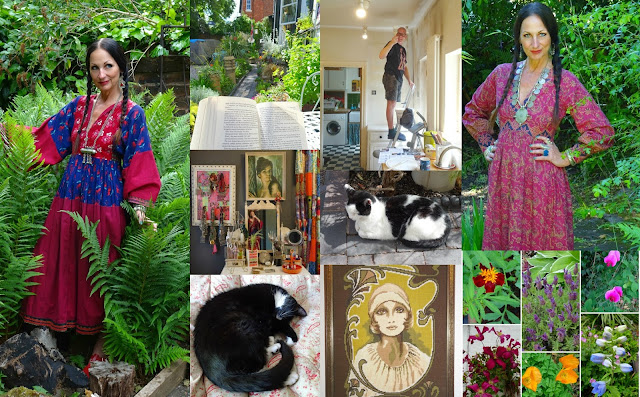 Thursday (day 76) was another overcast, damp and chilly day. When I woke at 6.30am I had to double-check the time, so used to the bedroom being bathed in sunlight, the dark fooled me into thinking it was much earlier. During my Wii Fit session with the new-to-me board, I was complimented on my perfect balance, my old one only had three feet and it kept telling me I was leaning to the left. I nipped outside and deadheaded the pansies & fuchsias and picked up the petals that yesterday's rain had torn off the Oriental poppies. Happily a few more had burst into bloom overnight.

Jon got up and we had our fruit & yoghurt breakfast. His plan for the day was to start preparing the kitchen for decorating which, judging by the state of the walls, would take longer than the actual painting so, as soon as he was dressed he got stuck in. Meanwhile, my mission was to update my necklace hanger. Since we'd revamped the drawers and tarted up the top of the dressing table it was looking tired. 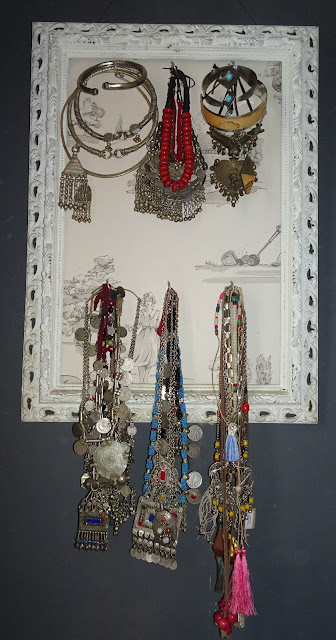 When we moved into Stonecroft in 2005 we decorated using the historically accurate colours for a house built in the Georgian era (1760), muted greens, dove greys, pale blues and antique whites but, with so many trees, we don't get a lot of natural light and the result was gloomy and uninspiring. Over the years we've redecorated using colours we love instead of those we're supposed to use. That pale grey scrap of wallpaper was a hangover from when we allowed our heads to rule our hearts. 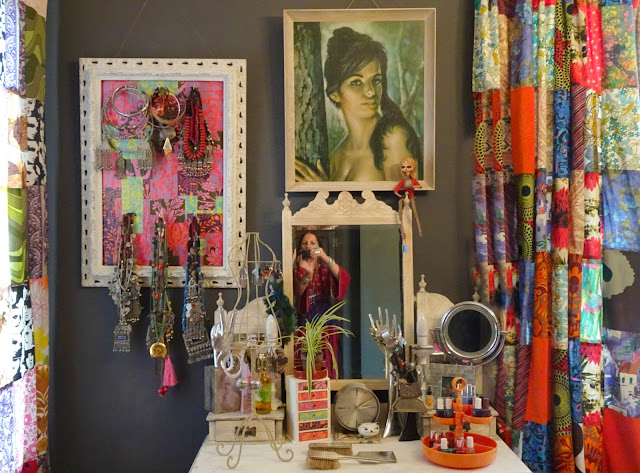 I removed the frame, scraped off the existing paper (a hand-printed Cole & Son freebie that retailed at over £100 a roll), cut up the remainder of my Indian wrapping paper and pieced it together to form a patchwork background. It took the best part of the morning but it's not like I'm short of time. 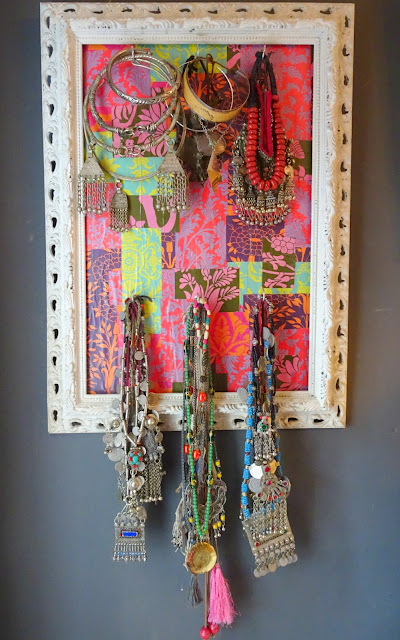 Just as I was finishing the necklace hanger off with a coat of Modge Podge, Jon called me down for noodles. 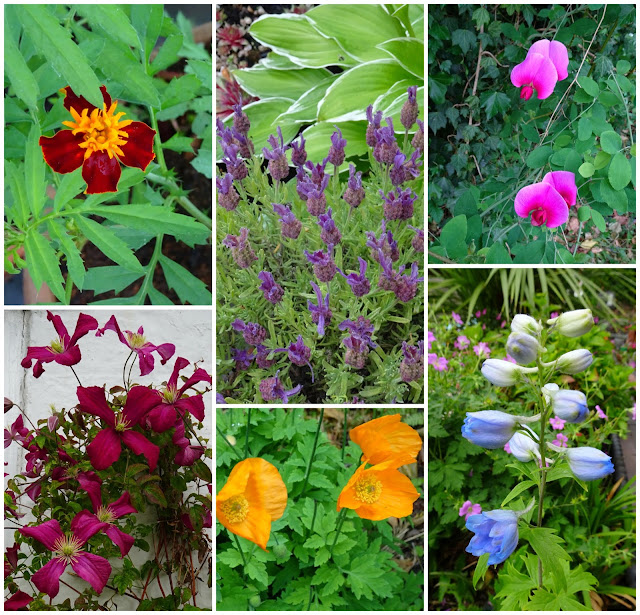 After lunch, the rain seemed to have stopped so I braved the garden to check on any signs of new life. The clematis is looking good as are the Welsh poppies, the French lavender and the feral sweet peas, the delphinium looks like it might bloom very soon and Mark's marigolds have already started. Exciting times! 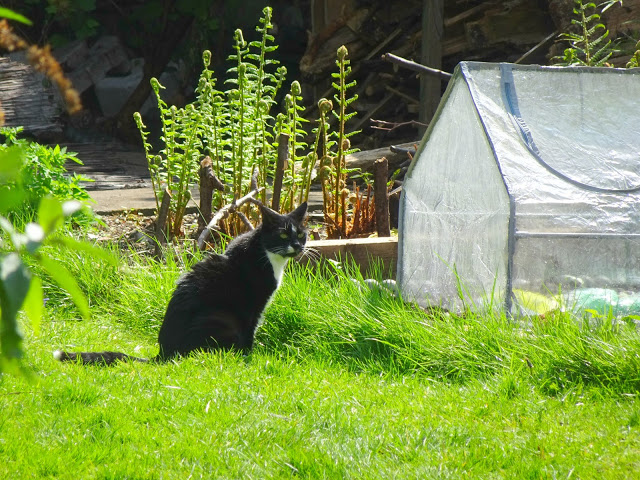 Here's Stephen posing with the ferns on 4th May and this is them now, a month to the day later. And before you ask, no, we never did try eating them, you crazy people!


Tony popped round with some beers and we sat outside with a coffee for an hour. That's three friends in a week, what a treat! 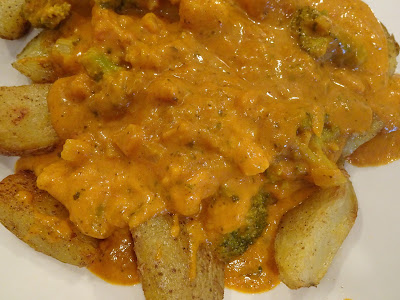 Tea was a cauliflower & broccoli curry served over homemade jacket wedges - it tasted delicious. We're back to living on potatoes again since Jon bought a massive sack from Farmfoods at the weekend. Not that I'm complaining.

Minnado left a comment on a previous post suggesting that we might enjoy Danish film The Commune, currently on the BBC iPlayer. Last night, with no Clap for Carers or The Real Marigold Hotel, to watch we decided to give it a try. There was some exceptionally fine acting and both the costumes and the interiors were gorgeous. Thanks, Minnado!


Friday (day 77) was another damp and dreary start, the cats did their business and went straight back to bed, cuddling up on either side of Jon to warm up. After my Wii Fit session, I went online and booked a National Trust visit, they've reopened a few of their properties and have reduced capacity so visits have to be booked in advance. It's been so long since we went anywhere I'll be ridiculously excited when we go on our trip next week. 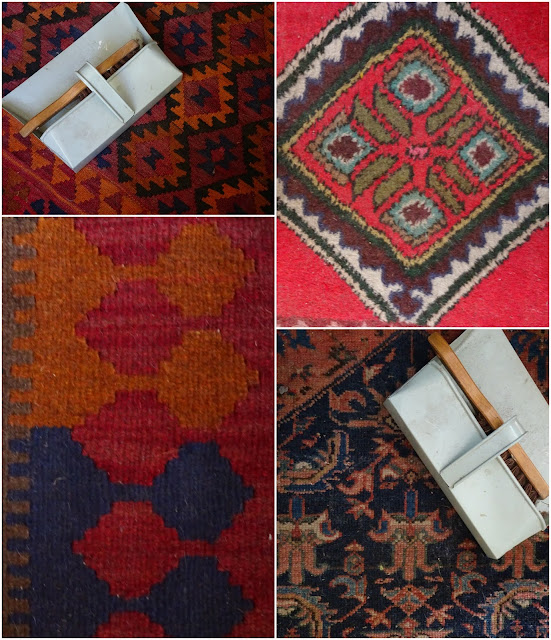 When Jon got up we had our fruit and yoghurt breakfast and, once dressed, he headed off in search of supplies while I swept the downstairs' rugs and gave the bathroom a quick going over. 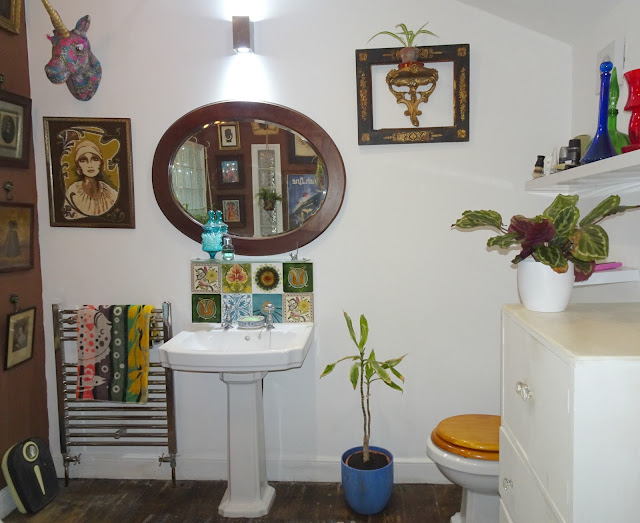 This 1970s framed tapestry was hanging on the wall in the spare bedroom but, as I keep the wardrobe door propped open with my shoe rack, she's been hidden away for ages. I decided to move her to the bathroom wall beneath our decoupaged unicorn so I could appreciate the artistry. I'm still amazed that the lady at the car boot sale only wanted £1 for her. 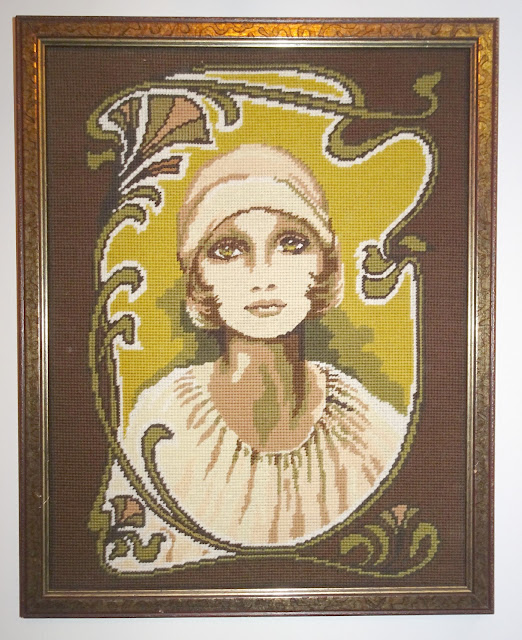 Jon returned, having braved Morrisons' for the first time since lockdown and also the Co-op round the corner. Neither shop had any queues, thankfully. In case you're wondering, the ham is for the cat. 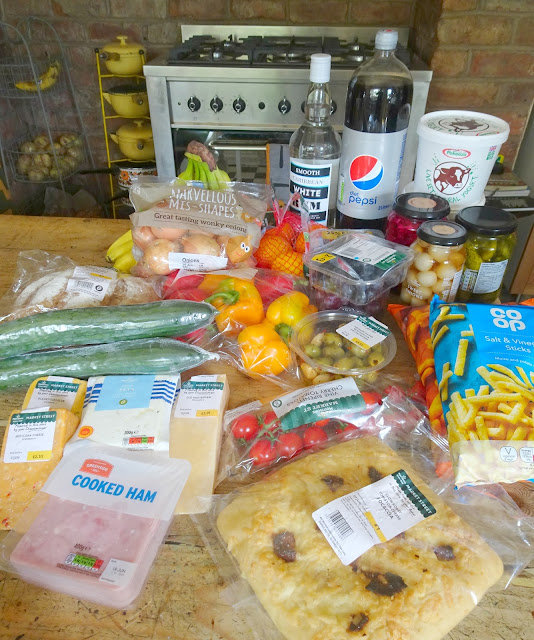 While I was browsing eBay before Jon got up on Monday morning I spotted a vintage Indian block printed maxi dress, which had been listed minutes earlier, for an absurdly low Buy-It-Now price. There were no measurements or mention of the fabric content but the photos were good and it was cheap enough to risk it. The seller messaged me as soon as I'd paid, realising that she'd neglected to give any information and sent me the measurements & fabric details (there was no label but she was 99% sure it was cotton) and very kindly offered to cancel the sale if the size or uncertainty over the fabric was an issue - I thanked her for her generous offer but said I was happy to go ahead. I could always add it to the stockroom rails if it wasn't quite right.


It turned up with this morning's post and I had to put it on immediately, I love it and am delighted I took the risk. 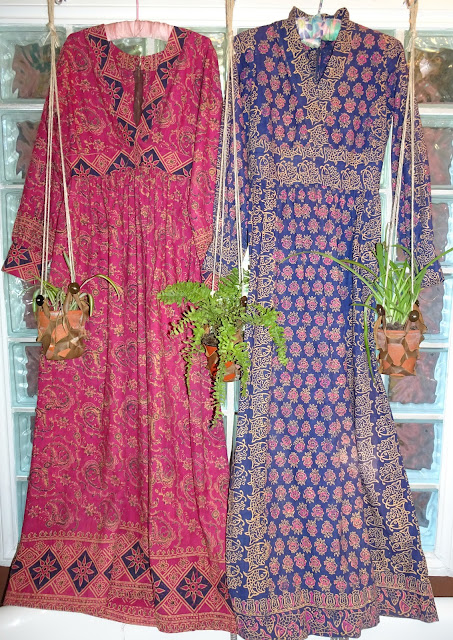 The seller had described it as homemade but as soon as I saw it I suspected it was made by India Imports of Rhode Island (becoming Adini in 1977) as the cut was identical to one I already owned. On closer inspection the finish is identical, even the zip is the same make and where the label is positioned on the blue dress, there's an area of loose stitching on the red one, making me suspect it had been removed at some point. 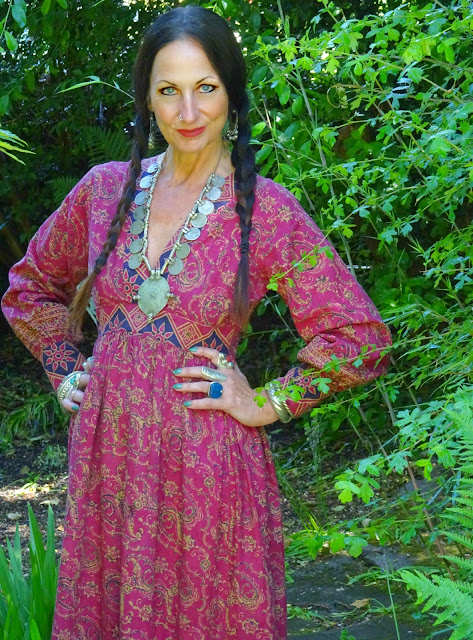 I'm wearing brown eyeshadow from a Barry M palette, something I don't think I've ever worn before and my eyes look freakishly blue. This was part of a special deal on the Barry M website but there's a few palettes going cheap on eBay. 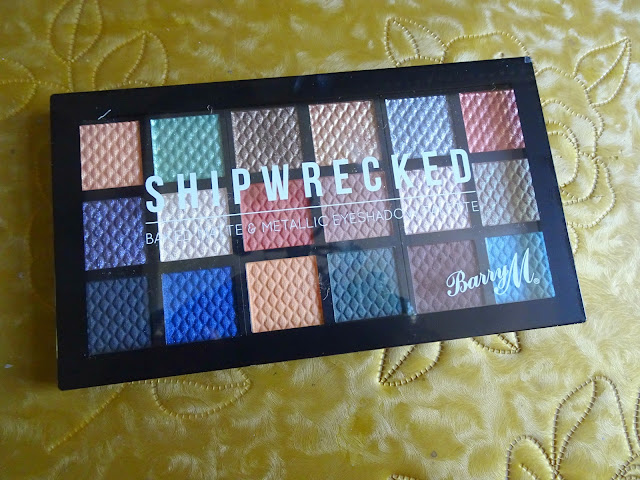 After our noodles, Jon continued with preparing the walls for decorating. 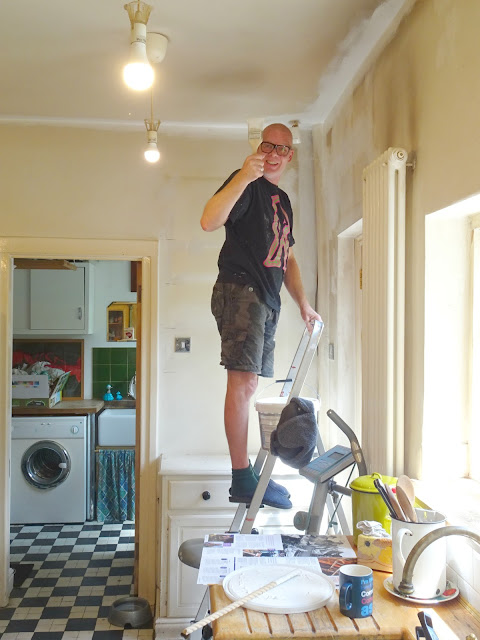 Whilst I swept the upstairs rugs. 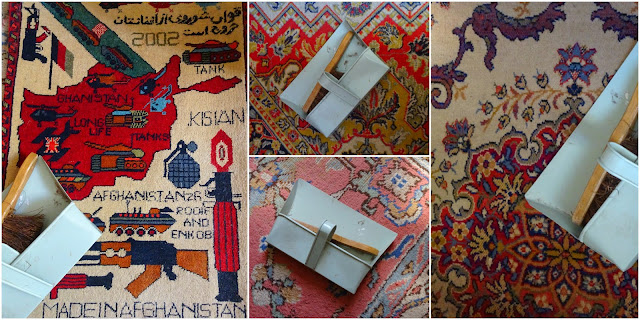 The weather has been crazy today, what with torrential rain, gale-force winds, unseasonably cold temperatures and a hailstorm. 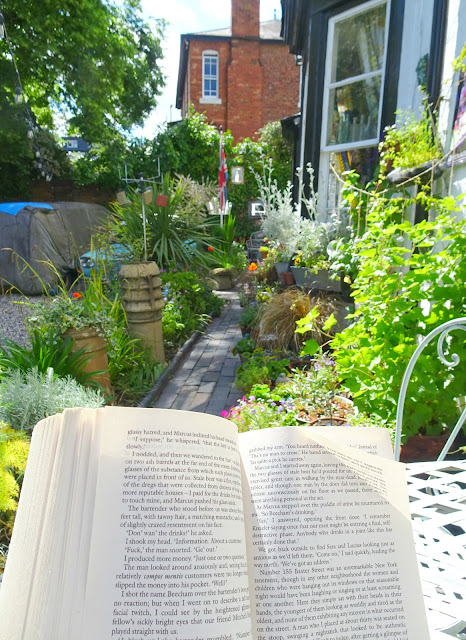 By 3pm it was warm enough to sit outside and finish my book whilst Frank lazed in the sunshine. 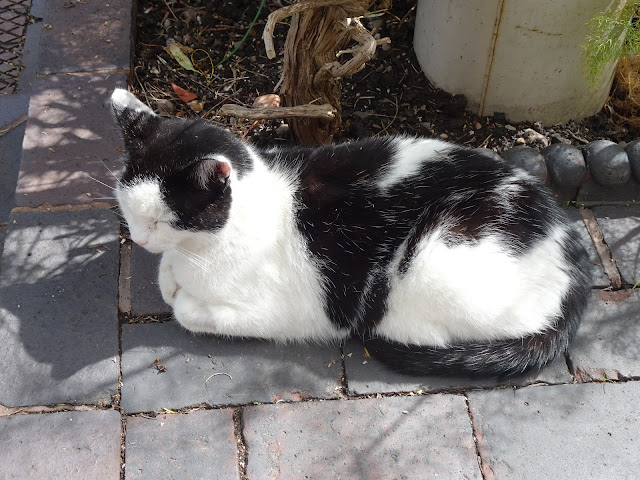 After a thorough soaking earlier, Stephen Squirrel's taken to our bed. 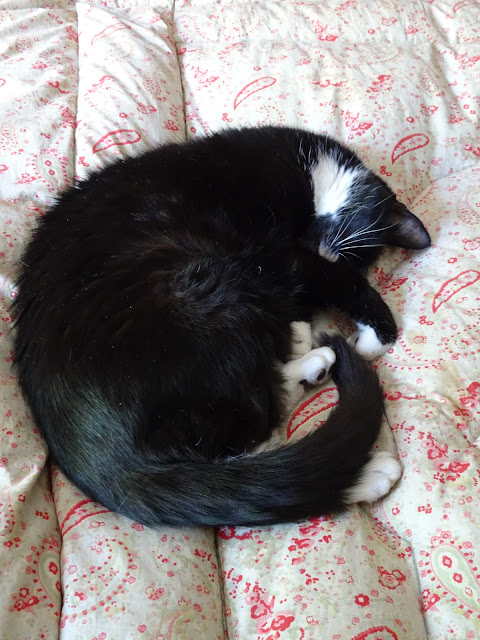 With The Alienist finished I had a wander around the garden to see if anything had changed since yesterday. 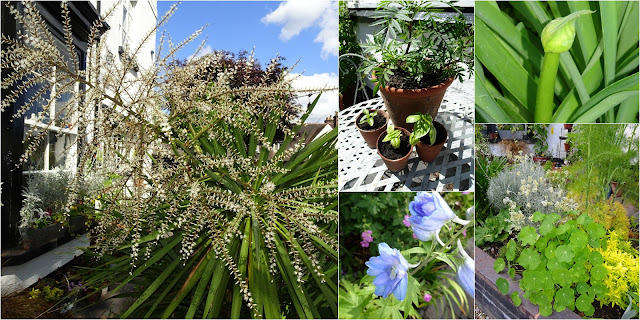 The Yukka has flowered and the heady aroma is intoxicating to both us and the legions of honeybees flocking to it, the basil is doing well since I put it outside, one of the Delphinium buds has flowered and the Agapanthus flowers are imminent (my favourite, they remind me of Greece!) The nasturtium has gone wild with all the rain. I'm so glad I took Beate's advice and moved it from a pot to the border. 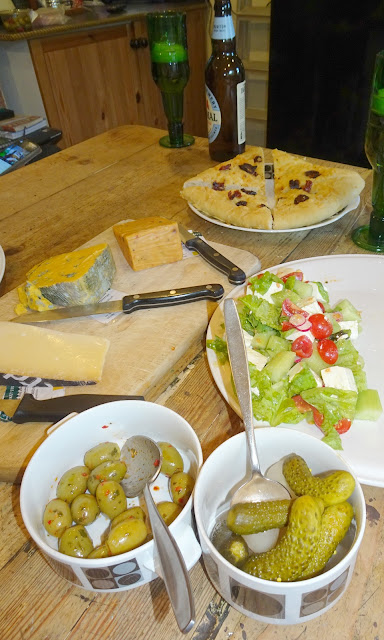 Tea was salad, pickles, cheeses and bread accompanied by a bottle of real ale courtesy of Tony. 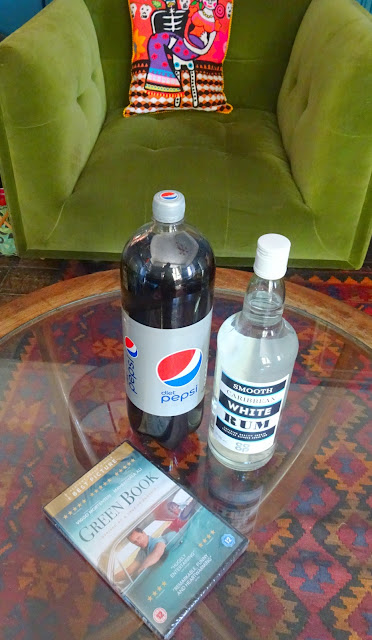 And this is the plan for later!

Take care, stay safe and thanks, as always, for your lovely comments,

Email ThisBlogThis!Share to TwitterShare to FacebookShare to Pinterest
Labels: Gardening, It's All About Me, Our House, Pets