One Hundred (and 101) Days of Solitude

When I called the blog post published on 2nd April Love in A Time of Corona, little did I know that I'd be bastardising the title of Gabriel García Márquez's other masterpiece three months later. For someone who lives for festivals, loves pubs and gets twitchy if she doesn't go charity shopping at least twice a week I thought lockdown would have me climbing the walls. How wrong I was! One hundred and one days since we made the decision to self-isolate (four days before BoJo told us that we had to) and we've enjoyed every moment of our lockdown time. 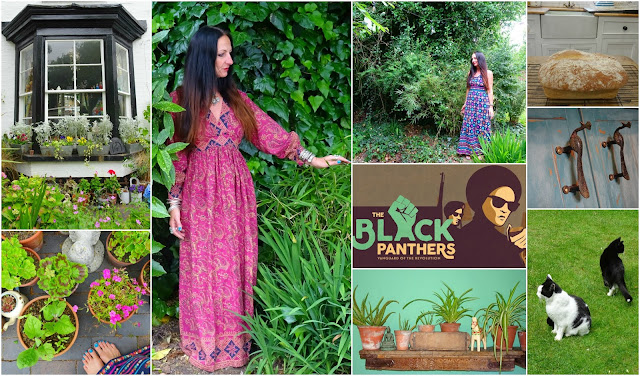 In 2005, after stripping Stonecroft down to a shell, we'd planned to spend months restoring it but unexpectedly we sold our other house to a cash buyer within an hour of it going on the market and had three weeks to pack up everything we owned and move into a building site. We've lived in chaos ever since, half finishing one room and moving on to the next, at first while holding down full-time jobs, then having me out of action for six months following a total hip replacement and since 2007, running our own business. In between, we've dealt with not only losing Jon's Mum but also my Grandma, my Mum and my Dad and had to empty their homes, sell their houses and deal with all the often-complicated legalities associated with the death of close family members. 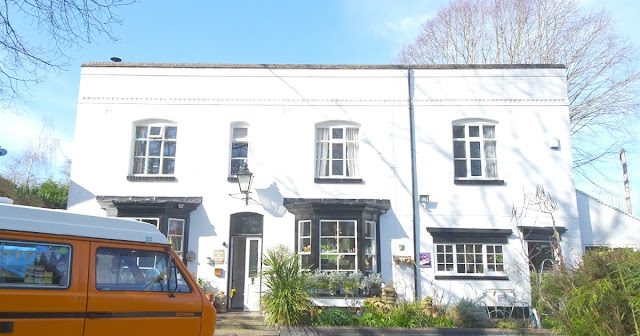 Lockdown may have robbed us of an income and a social life but it's given us the gift of time. Stonecroft is finally getting the care and attention it deserves and both house and garden have never looked better, Jon and I have spent over three months almost exclusively in one another's company and you know what? We're happy. I have no wish to visit non-essential shops, go to the pub or rub shoulders with a quarter of a million Brits on English beaches. 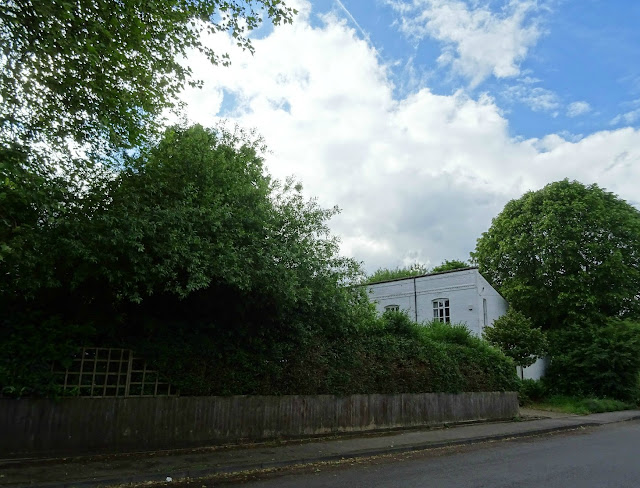 I was first up on Sunday morning (day 100). Whilst waiting for the tea to brew, I applied a third coat of paint to the kitchen cupboard then took our mugs back to bed and stayed there reading until 8am. It was too late to wash my hair when I'd showered the previous evening so I did it when I got up. Jon made sausage sandwiches using the spelt loaf he'd baked on Saturday afternoon while I painted my nails at the kitchen table. 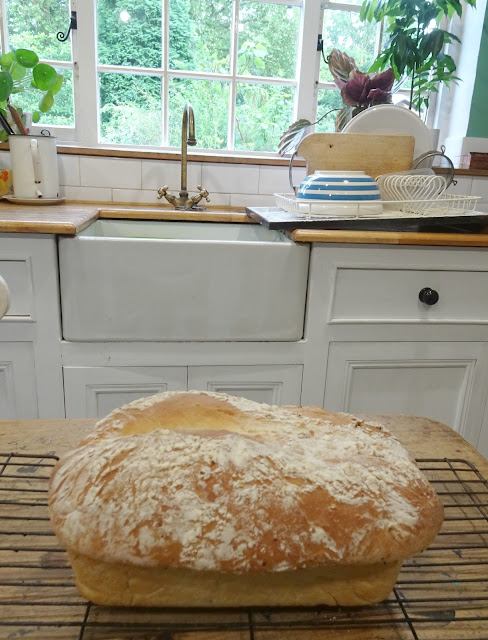 After watching the Andrew Marr Show I got dressed and put away the washing that had been hanging up in the utility room since I'd rescued it from the rain the previous day. Jon popped round to Tony's as he'd collected our tiles for us, unable to pick them up ourselves due to Jon's back being knackered.

It was blustery but dry so I headed out into the garden.

I dug over the plot from where I'd pulled up yesterday's turnips, raking in some homemade compost and covering it over with plastic to deter any naughty cat using it at as a toilet. I weeded the patch of land by the water butt, cut back the bamboo, brambles and bindweed threatening to engulf the ferns and dug over the area beneath the apple tree ready for planting with something fairly shade-tolerant later in the week. 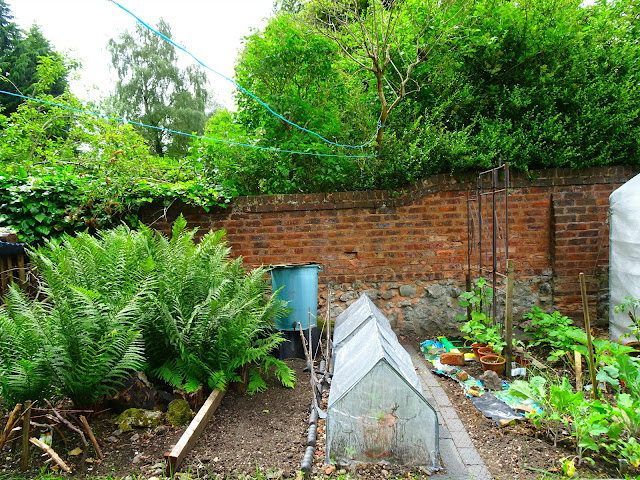 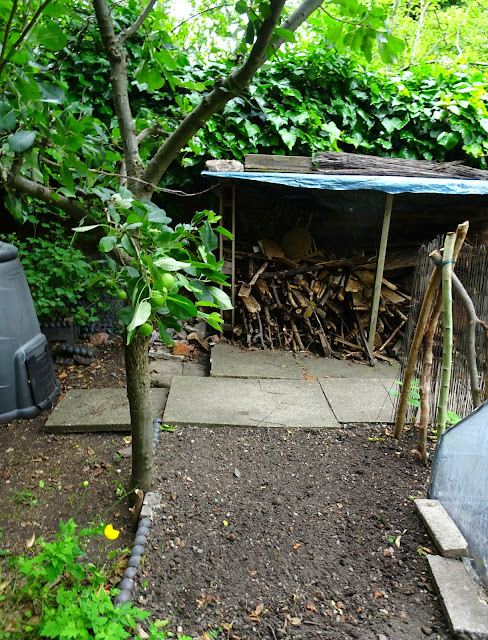 It's been unusually windy for June and over the last couple of days, the blossom from the huge lime tree has covered everything in 2inches of yellow fluff - including the cats, the vehicles and us whenever we venture into the garden. Using a hand brush I swept under every pot on the patio and deposited four dustpans of sweepings into the compost bin. Doing it didn't half make me cough, I bet anyone passing by thought I'd succumbed to the plague. 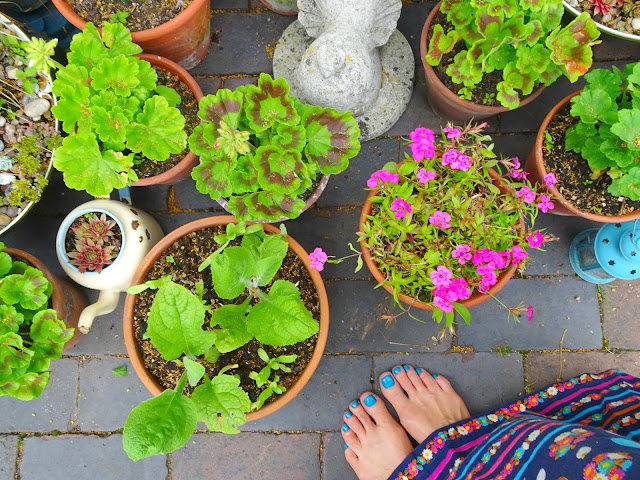 By now Jon was back with the tiles and a bottle of fizz for me (a present from Tony). We had a coffee (most welcome after several hours of physical labour) and, feeling more flexible, Jon sanded down my freshly painted kitchen cupboards, applied a coat of waxed and attached the burnished brass peacock handles we'd bought from the roadside in Goa last year. 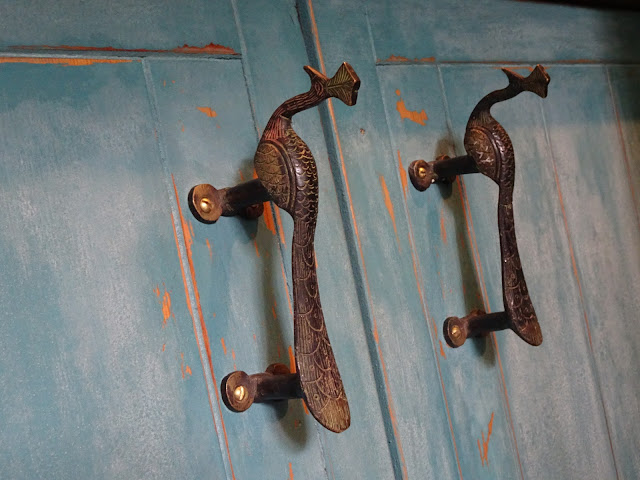 Jon decided to tackle Gilbert's solar panel as it wasn't working properly while I rummaged through the woodpile behind one of the sheds for some planks to use in the kitchen. 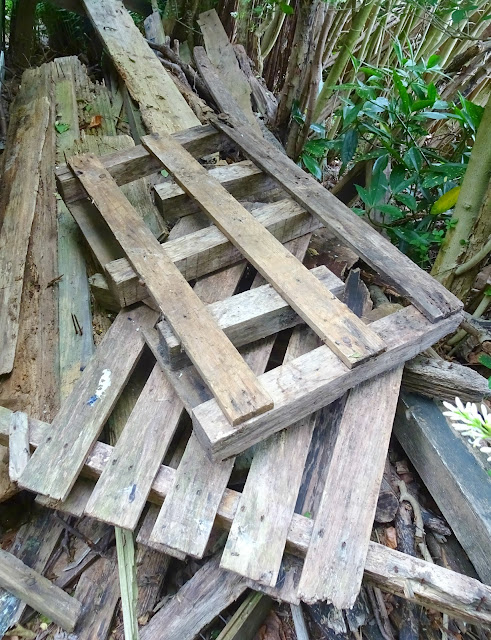 I think it'll be a while before we need to buy any wood. Fly-tipping is a massive problem in the UK (and Walsall in particular) but occasionally the inconsiderate bastards who do it leave us with something useful like the pile of pallets that were chucked over our garden wall a couple of years ago (we've used three-quarters of them so far) or the empty 15kg bottle of butane gas dumped outside our gates last month, which will save us £15 when we take it to the camping shop to be refilled. 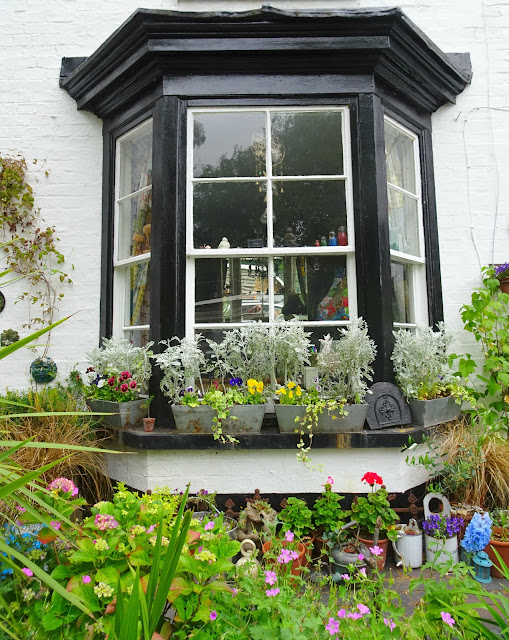 Planks sorted, I cut back the ice plants that were going crazy in the window boxes - the experts tell you to remove these at the end of the season and throw them in the compost bin, I've no idea why, this is their second summer and they look fine to me. Next, I decided that the patio plants could do with watering. Within minutes of finishing it started to rain. Good old British summertime.

Tea was pizza and oven chips. Before episode three of The Luminaries, we watched Black Panthers, Vanguard of the Revolution on the BBC i-player where we were rendered speechless by J Edgar Hoover's cointelpro infiltration of the movement using blackmailed provocateurs and the murder of 21-year-old Panther's leader, Fred Hampton by the Chicago Police acting on tips from the FBI. Well worth watching.


Here's my alarm clock, which Jon brought back from touring Japan with The Charlatans back in 1990, now thirty years old, it's officially vintage. It went crazy during the first week of lockdown and, regardless of what time it was set, Winnie The Pooh started shouting in Japanese at random hours throughout the night (any idea what he's saying, Allie Jane?) Not that it matters, I was always awake before it went off anyway and now, during lockdown, I seem to wake up even earlier. This morning (day 101), it was another 6am start. 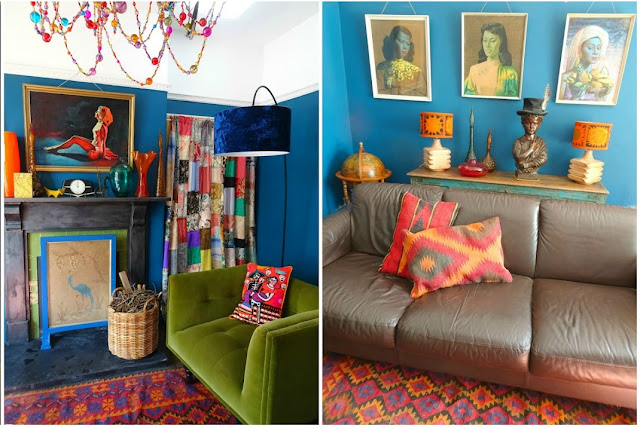 After my weekday Wii Fit session, I dusted and swept the lounge and mopped the hearth and had just finished when Jon came downstairs to join me for our fruit & yoghurt breakfast. 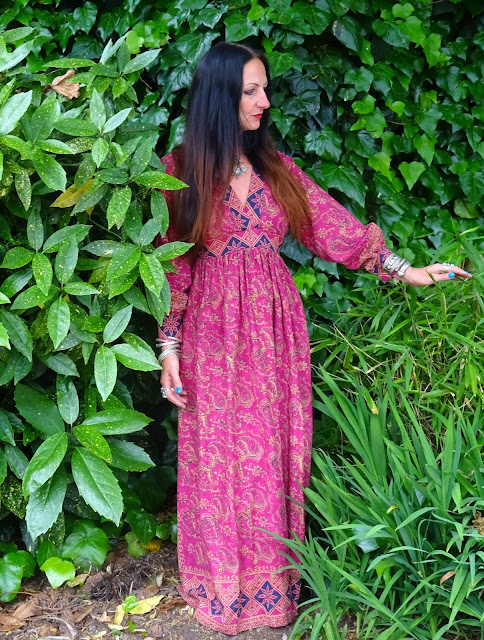 After our record-breaking temperatures, today had plummeted to 12°C so it was back to long sleeves.


The garden was still damp from yesterday's showers so there was no need to wrestle with the hosepipe. 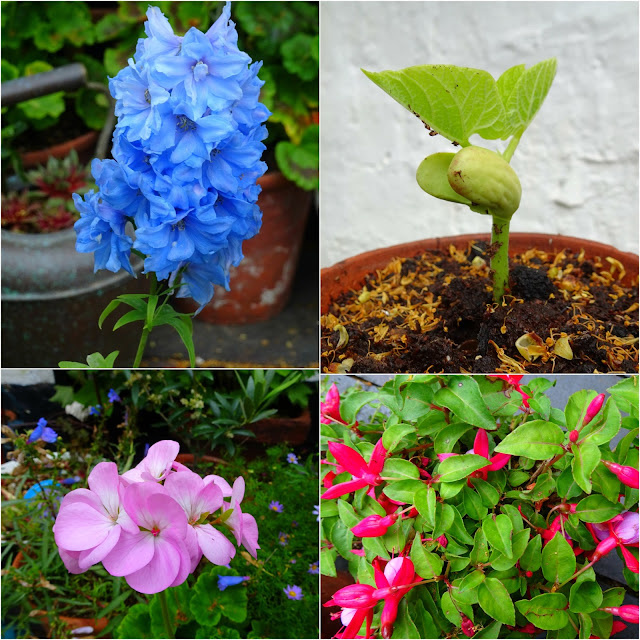 Anything new in the garden to report? I'm still anxiously awaiting the blooming of the crocosmia and agapanthus but two of the four dwarf french beans I planted last weekend have sprung into life, the Empress of India nasturtium which I thought bore red flowers instead is a spectacular combination of yellow, orange and red.  The delphinium has another pretty blue spear and the common poppy which appeared out of nowhere a fortnight ago has flowered once more. 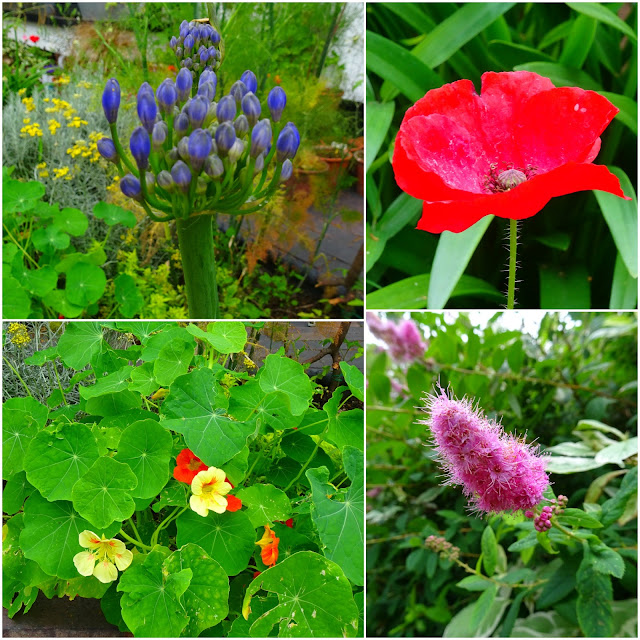 The trailing geraniums we planted in pots on top of the trestles we'd rescued from the parental home are just beautiful (thanks for the recommendation, Eileen!) and Mark's marigolds provide us with a daily reminder of India. 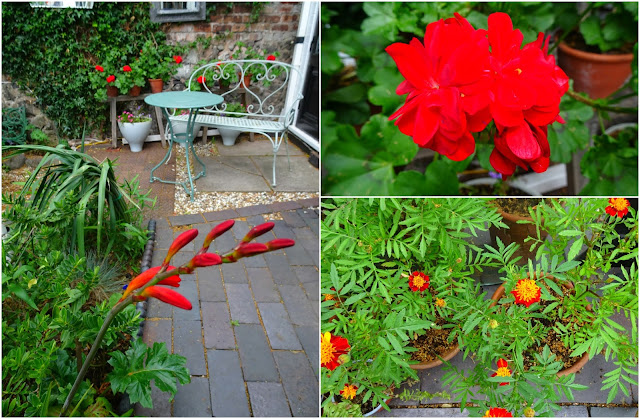 Too windy and cold to stay out for longer than necessary, I decided to play around with the shelves in the kitchen, staying out of Jon's way as he was busy tiling.

These shelves are part of Project Coffee Table, Jon's quest to upcycle the beast made from an antique Rajasthani door, that was far too big for the house and had languished under a tarpaulin in the garden ever since we'd replaced it with the glass-topped G-Plan Galaxy table we bought for £1 from a jumble sale in 2011. 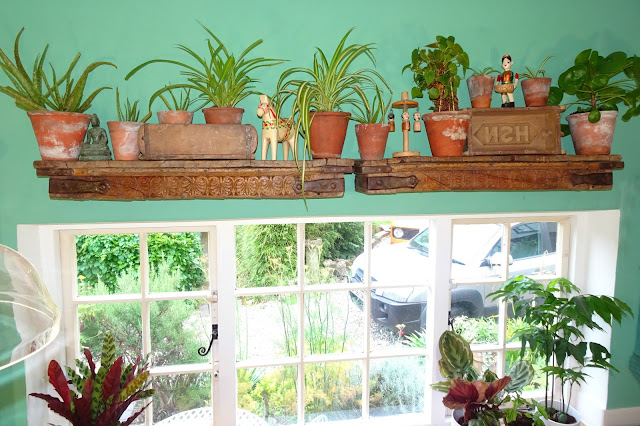 Using the ornately carved edging strips from the sides of the table, a couple of planks from the top and the chunky rivets that held them in place, Jon made me some rustic shelves. 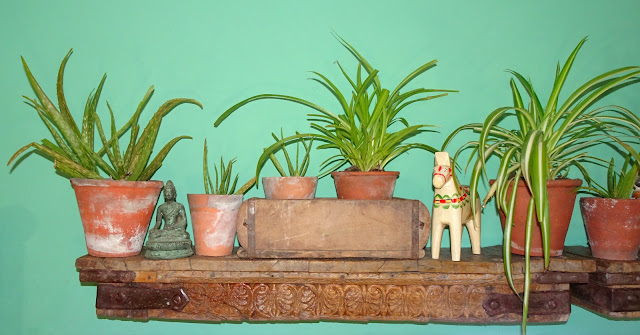 You've already been introduced to my Indian brick moulds. Before you tell me not to put plant pots on wood, I promise you that they are completely dry & I've laid plastic underneath as a precaution. The verdigris metal Buddha was an Indian flea market find back in the noughties and the Swedish Dala horse was out of the 50p bucket in the clearance charity shop. 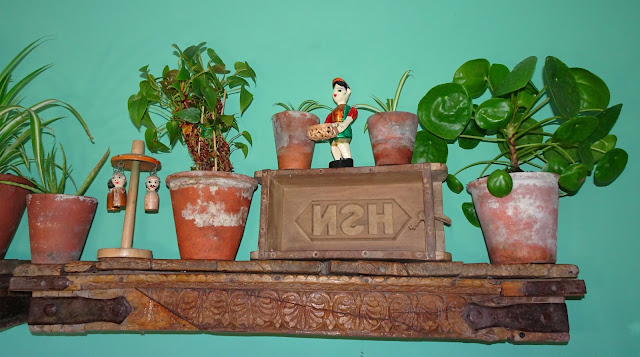 The Rajasthani wooden merry-go-round is one of a pair, my Grandparents bought them for me back in 1972. The papier-mache chap (Kashmiri, I think) has a loop at the back and tips his basket up over his head when you pull it and was another 50p charity shop find. 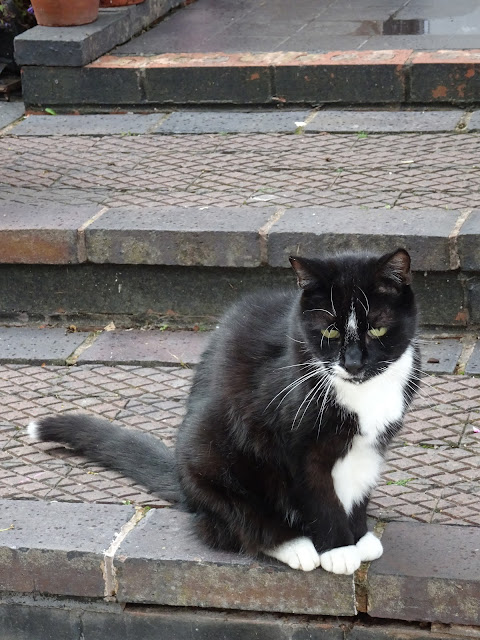 After our lunchtime noodles, Jon finished the tiling while I had a lazy afternoon, repotting my Chinese Money plant and the remaining two basil plants I'd grown from seed (the rest got eaten by slugs), catching up with blog comments and letting the lads in and out about a hundred times as neither was sure about the weather. 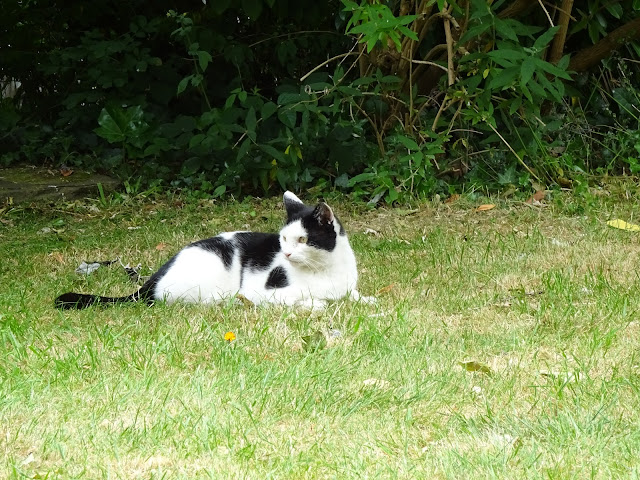 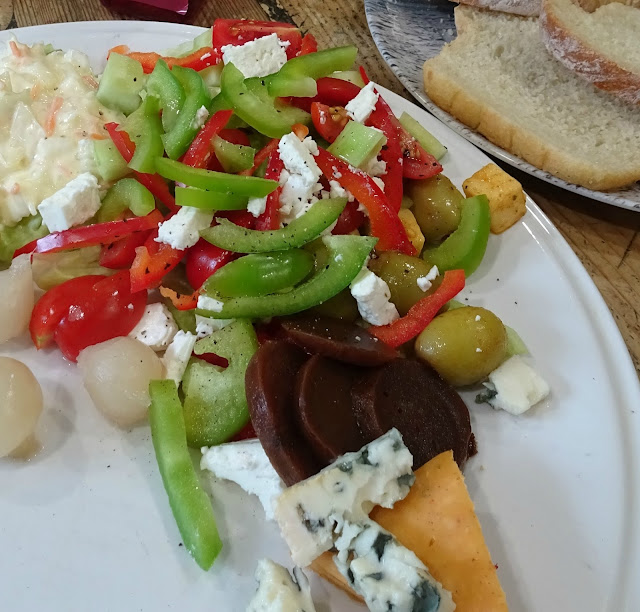 Tonight we'll be watching the final episode of the Art of Persia with the heating on, it might say June on the calendar but it feels more like March.

Email ThisBlogThis!Share to TwitterShare to FacebookShare to Pinterest
Labels: Gardening, It's All About Me, Jon, Our House, Outfit, Pets