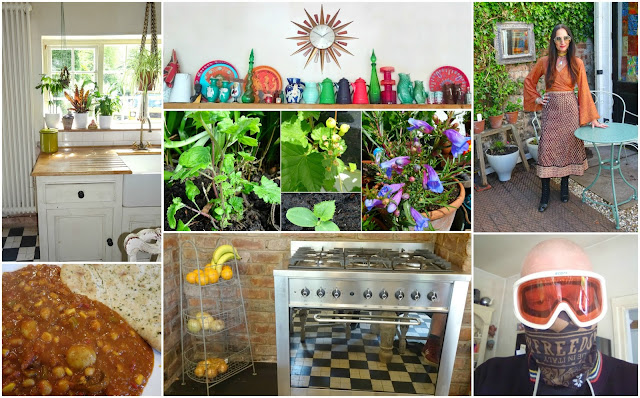 Day 54 (Wednesday) started off cold and wet. After my Wii Fit session I caught up with blog comments and once Jon was up we had breakfast & made a list for the weekly grocery shop which, once again, he did alone. Lockdown might have eased in England but he wasn't taking any chances. 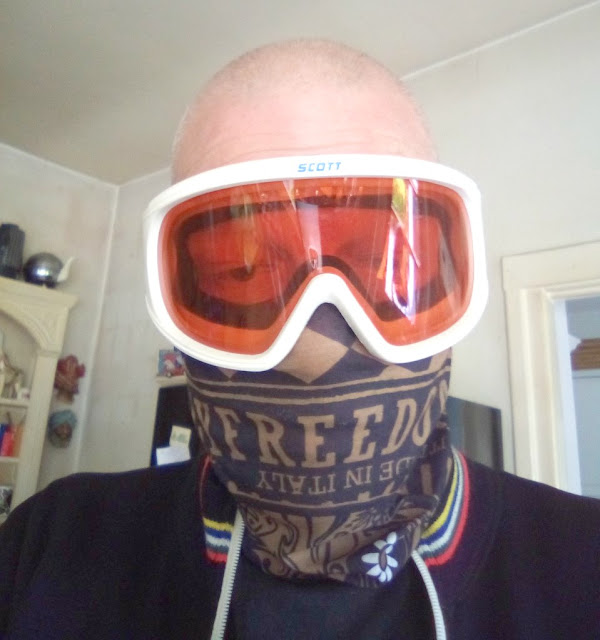 After getting dressed I searched through our stash for aubergine seeds as our second attempt had failed yet again but there weren't any so I trawled eBay and bought a packet for 99p (including postage).


Both my friend Gaynor and SallyC had suggested I submit my last blog post for the 12th May, 2020 Mass Observation Survey so I copied it to a Word document, removed the photos and our names and forwarded it to the organisers. 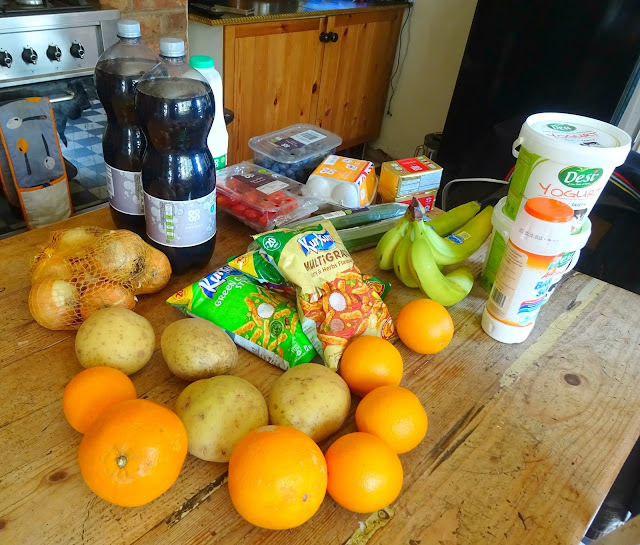 Jon returned home with the shopping. Along with a full freezer and well-stocked cupboard that should keep us going for the next week or so. You'll be glad to know we're okay for rum, too. 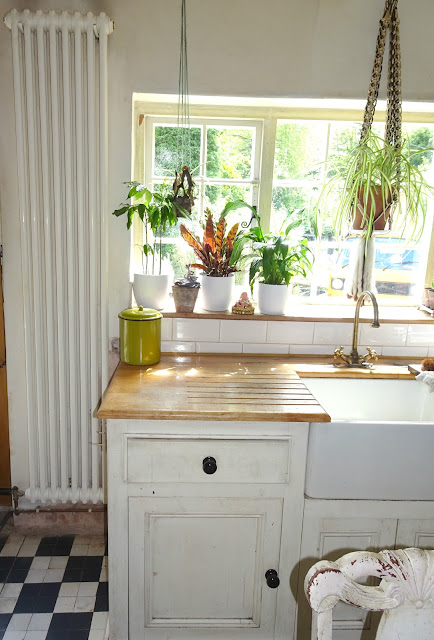 I decided that Wednesday's mission was to scrub down the kitchen radiator. I would have taken a before photo but you'd probably have disowned me, it was in such a state. I removed ten years of dirt with a coconut scrubber, an old toothbrush and some baking soda. Now it's all ready for painting when we Jon gets round to decorating the kitchen.

I'd expected to be scrubbing that bloody radiator for the best part of the day so was amazed when I'd finished by lunchtime - which, by way of a change, was Ray's bread with a tin of carrot, lentil and coriander soup from our festival stash (which I doubt we'll be needing this year). After we'd eaten I got all the stuff down from the railway sleeper shelf above the cooker and gave it a wash. Not as bad a chore as it could have been as I'd only done it six months ago. 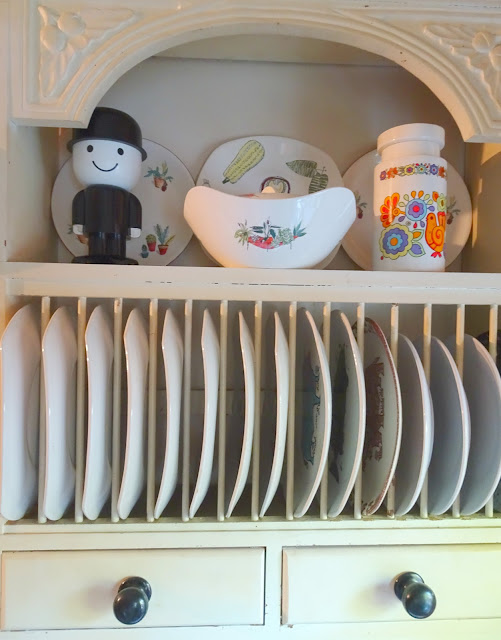 I moved on to the plate rack, washing my collection of Beefeater plates and 1960s ceramics. 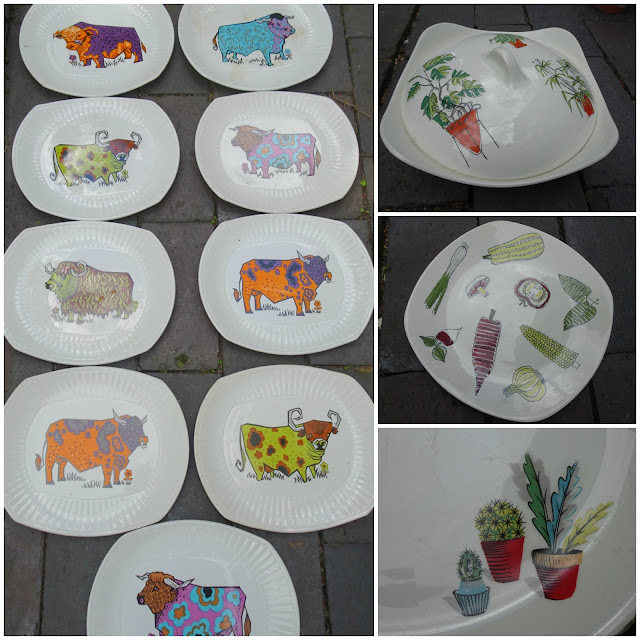 And moved on to the shelf where we store our collection of tea & coffee. 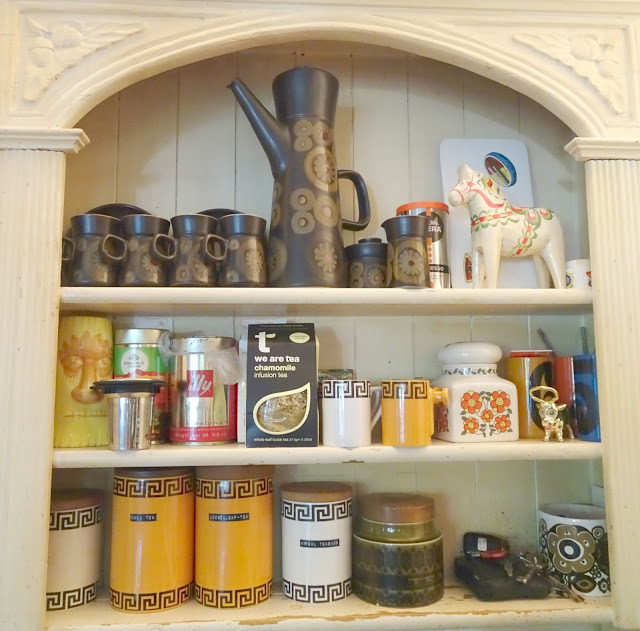 Whilst I was scrubbing away, Jon was measuring and drawing up plans to box in the boiler and the pipes in the utility room using wood from his never-ending stash. Once the sawing started there was lots of swearing but it's starting to look really good considering he's using scraps most people would probably chuck out.


I harvested some of our curled cress and mustard to garnish our tea. 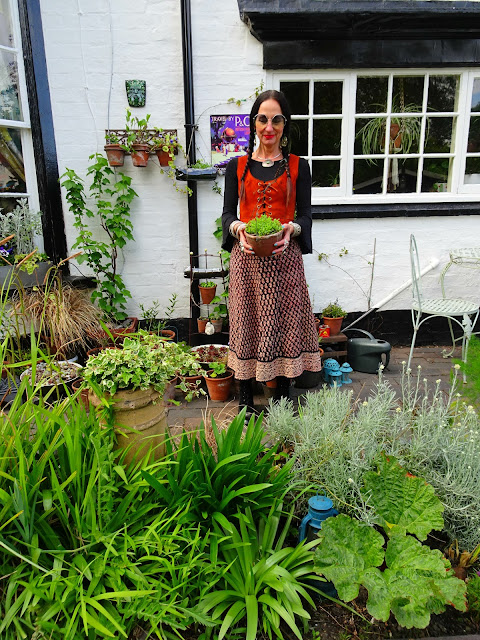 We braved the biting wind and bitter cold for a walk around the block and rewarded ourselves with a bottle of beer on our return. I wanted to sit outside at the new table but that'll have to wait till the weekend, it's bastard freezing out there! 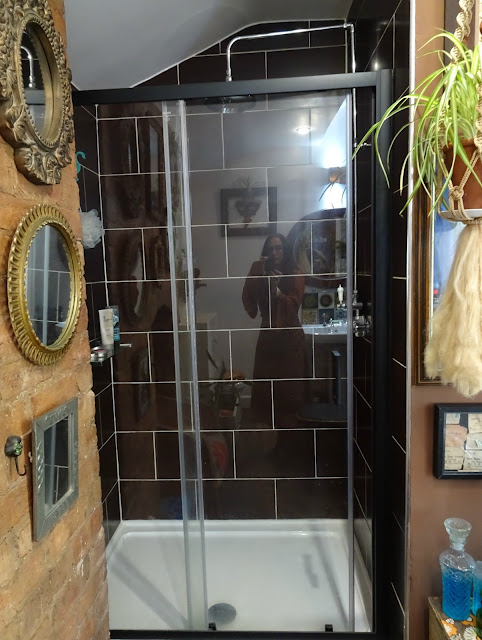 I'm not the only scrubber in Stonecroft. Jon gave the shower a good going over after he'd finished in there. 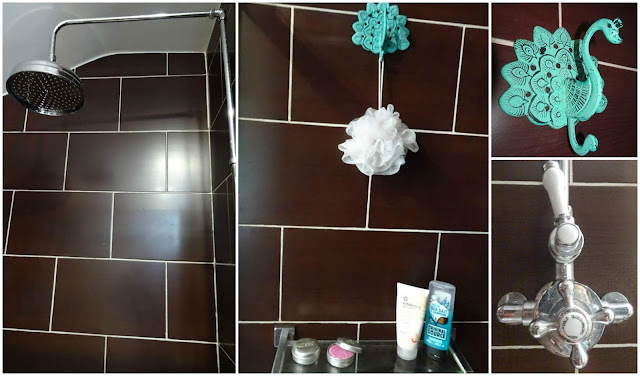 Tea was roasted vegetable pizza with salad and, with it being a Wednesday, we cracked open the rum & cola. 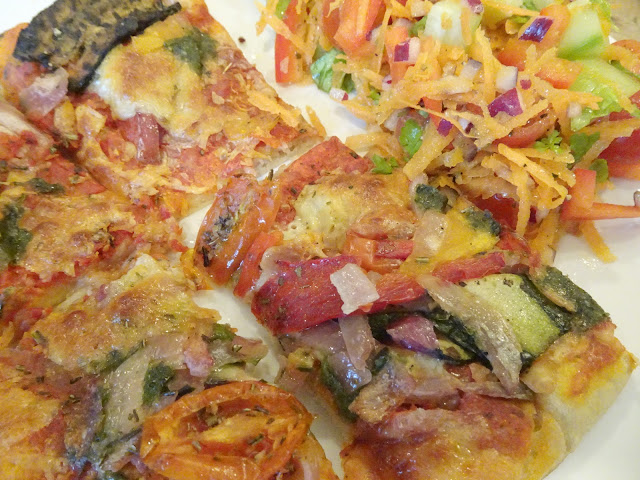 The previous evening we'd discovered Fenix, a gritty Dutch thriller on Channel 4's Walter, and loved it. We watched another couple of episodes before switching over to The Great British Sewing Bee. The last couple of weeks have been themes in which I have zero interest, childrenswear and sportswear, hopefully, next week's lingerie episode should be a bit more inspiring.


This morning (day 55) I had difficulty taping our thank you notes to the tops of the wheelie bins as they'd frosted over, in fact, it had been so cold last night that I'd gone to bed with a hot water bottle. I did my Wii Fit session and at 8am on the dot, submitted my claim for the Self-Employment Income Support Scheme and was immediately told the amount we were due and that the money would be paid into our bank account within 6 working days. I wasn't expecting it to be so straightforward. 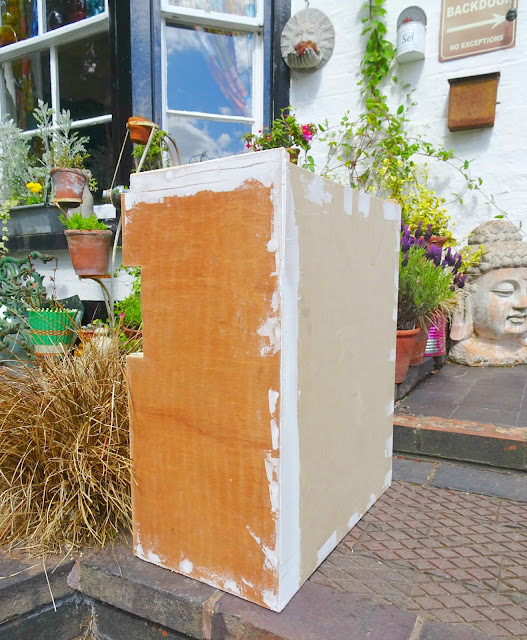 After our fruit & yoghurt breakfast and once we were dressed, Jon sawed more wood for his project whilst I watered the patio plants for the first time since Tuesday morning. To our delight, it was deliciously warm in the sun, a real treat after the bitter cold of the last few days. 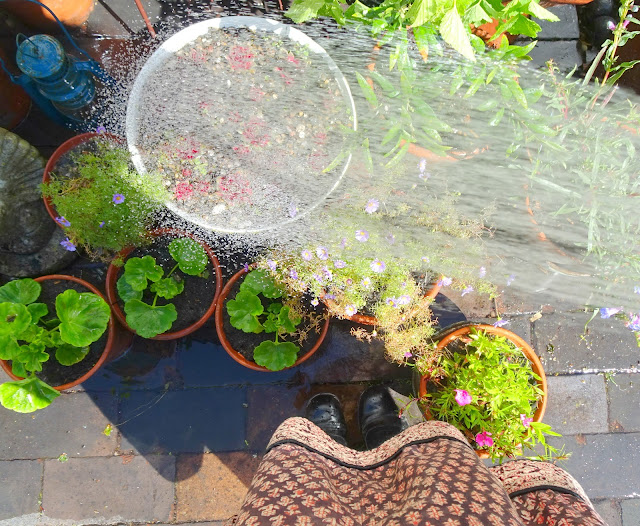 A wander around the garden led me to discover one of the catmint plants that I thought Frank had destroyed last year, lurking beneath a hydrangea, so I dug it up and moved it to a better position in the border. The red & blackcurrant bushes had started to bear fruit, the lemon cucumbers I'd planted in the cloches last week were looking remarkably healthy and the Penstemon the garden centre had delivered a few weeks ago amazed me with its gorgeous electric blue flowers. 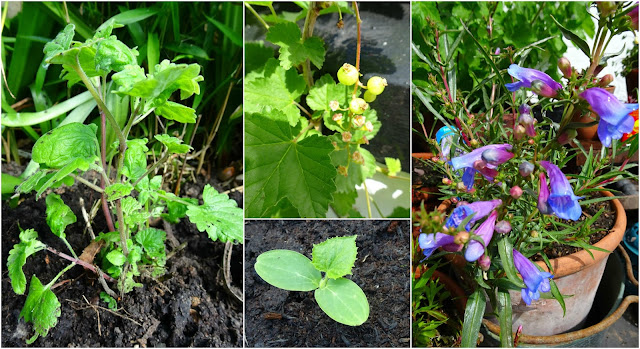 Meanwhile, in the greenhouse... 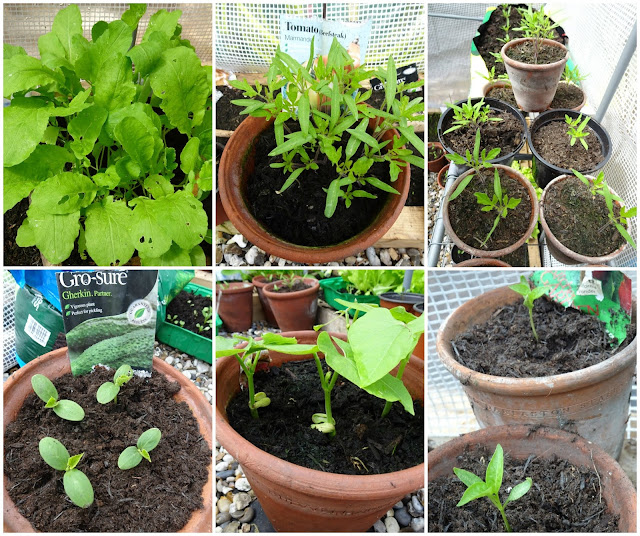 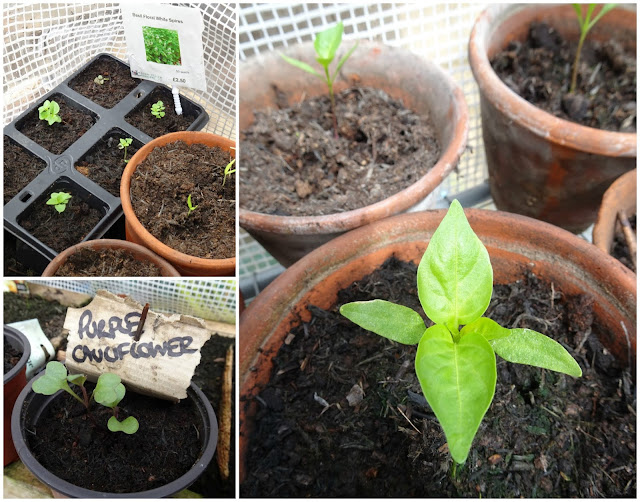 After our lunchtime noodles, I decided that enough was enough, I couldn't bear to look at our grease-smeared range cooker any longer. I'd run out of Wilko's bicarbonate of soda, my usual go-to cleaning product, but Jon had found this Manchester-made alternative in Johal's yesterday. That's my year-old coconut scrubber, still looking quite perky. Did I mention they're brilliant for cleaning baths and kitchens, too? 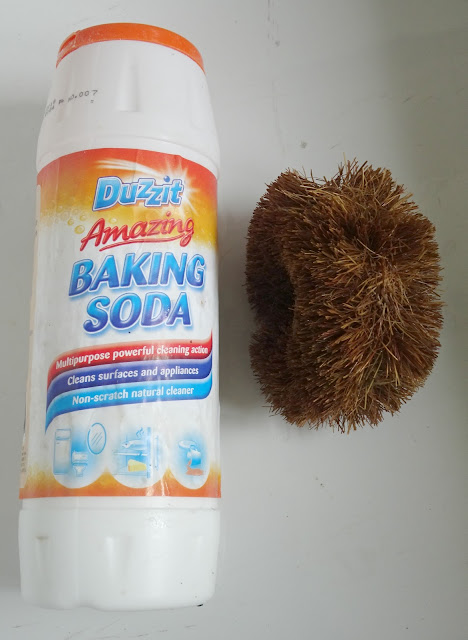 It took the best part of two hours and you'll have to take my word for how horrible it looked before I started, but I can see my face (and Jon's legs) in it now! 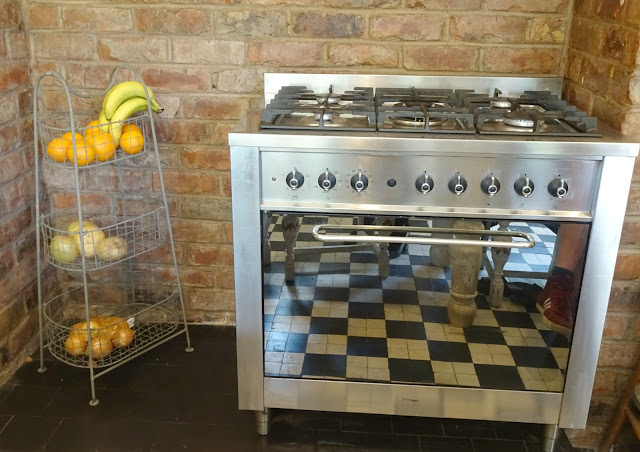 Talk about perfect timing, just as I'd finished cleaning the postman arrived with our National Trust magazine so I sat outside in the sunshine reading it. 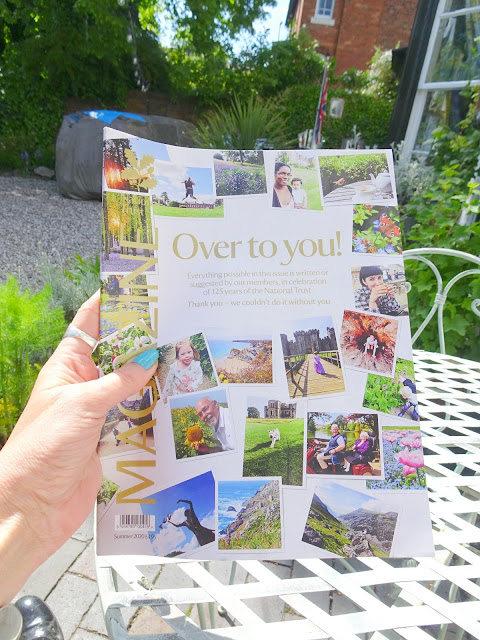 Boiler pipes boxed in, we had a coffee in the garden and then went for our daily walk around the block. 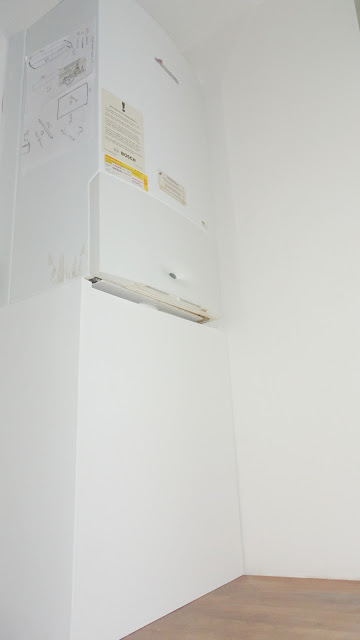 When we got back we had a bit of a swap around, moving the bench that normally sits beside the pond up to the wall of mirrors. 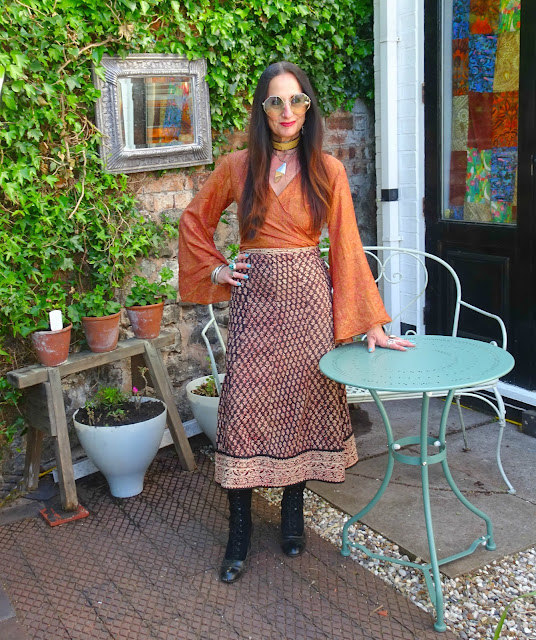 Don't adjust your screens,  I'm wearing the same boots, midi skirt and sunglasses as I did yesterday. The skirt is part of a suit and I've hardly worn it, I'm not sure why not, I love the fit, the quilted hem and how it makes me look really tall (or, at least, taller than my usual 5' 3 1/2"). 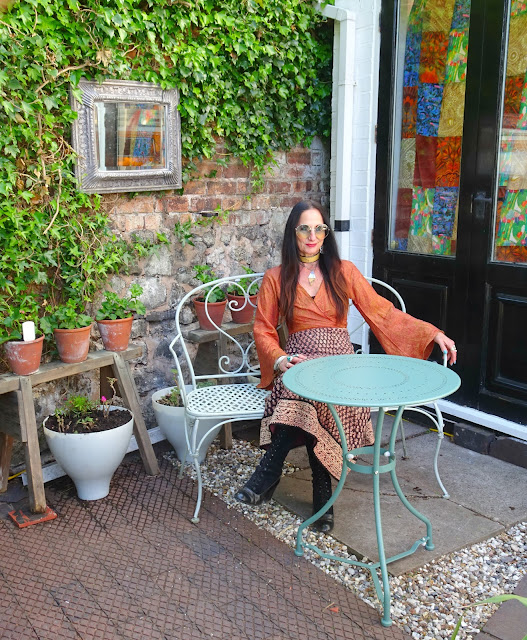 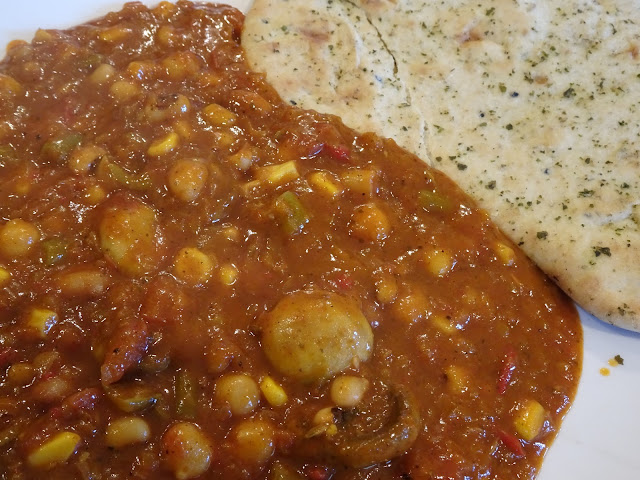 Tonight we've had a mushroom and mixed bean Rogan Josh with garlic & coriander nan for tea. Hopefully, we'll be able to squeeze another couple of episodes of Fenix between clapping for our carers at 8pm and The Real Marigold Hotel at 9pm.