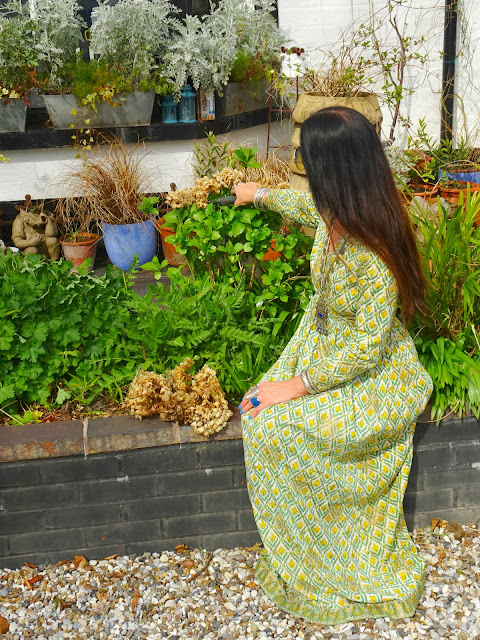 Yesterday, I awoke bright and early. I made tea and brought it back to bed where we languished with the cats & read until 8.30am. When we got up I returned the plants I'd left soaking in the bath overnight to their normal positions, and joined Jon in the kitchen for porridge with honey and our penultimate banana and watched the Andrew Marr Show. 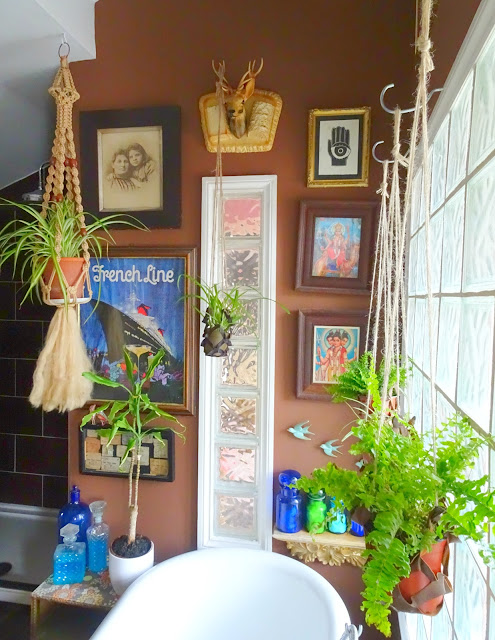 After getting dressed Jon set about sorting another of our garden sheds (we've got a few!) while I sat outside and repotted a couple of houseplants which were looking a little worse for wear. 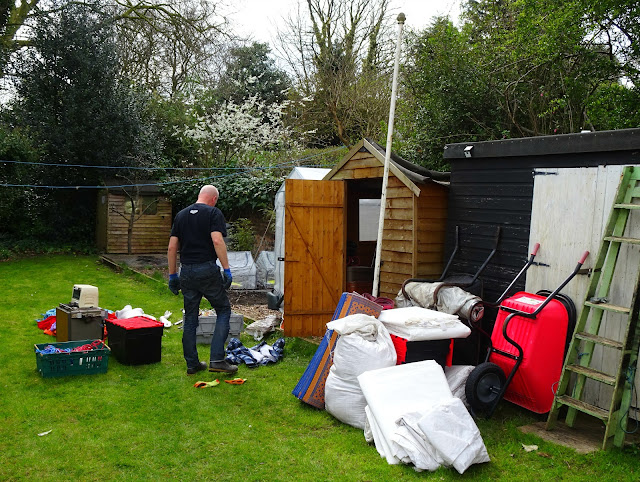 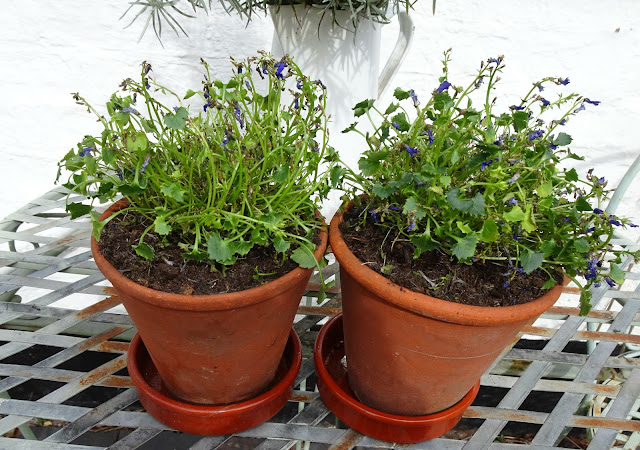 Using some vintage fabric from my stash I made a couple of face masks following THIS tutorial (although I used 8" of elastic as the recommended length was a bit snug). 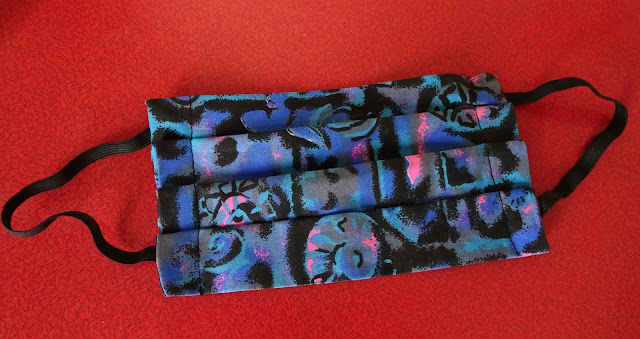 Our government maintains that it isn't necessary for the general public to wear facemasks but the guidelines seem to change almost daily and I wouldn't dream of depriving a key worker of a proper mask when I can make my own. 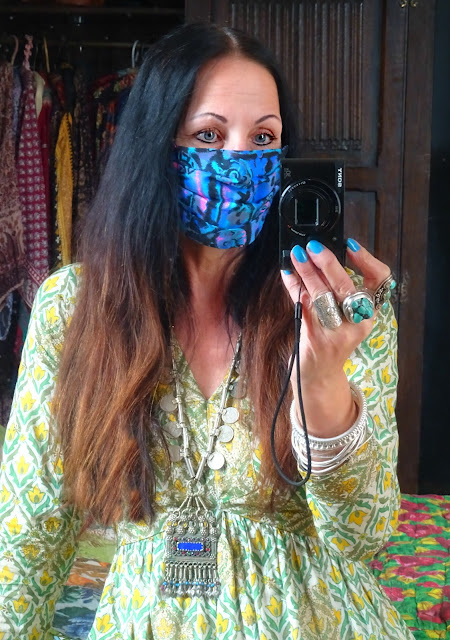 It was much warmer than it had been yesterday and we even had some sunshine although the gusty wind meant it wasn't quite as glorious as I'd hoped. 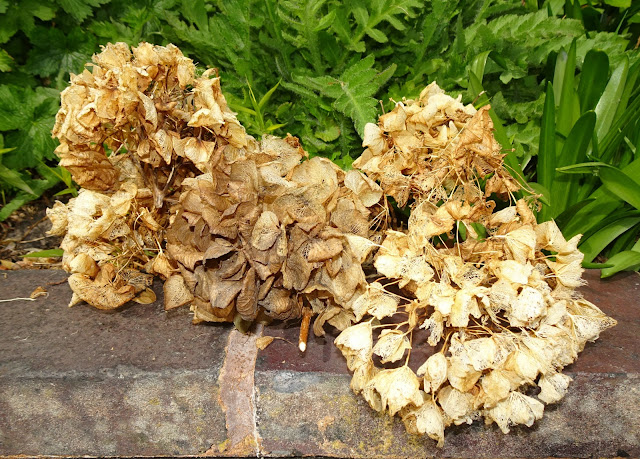 After our lunchtime bowl of noodles, I spent a couple of hours pottering around the garden, cutting back brambles and doing a bit of light pruning.


While Jon took himself off indoors with the hair clippers for a bit of self-care I sat in the garden with a posh coffee and finished off my book. 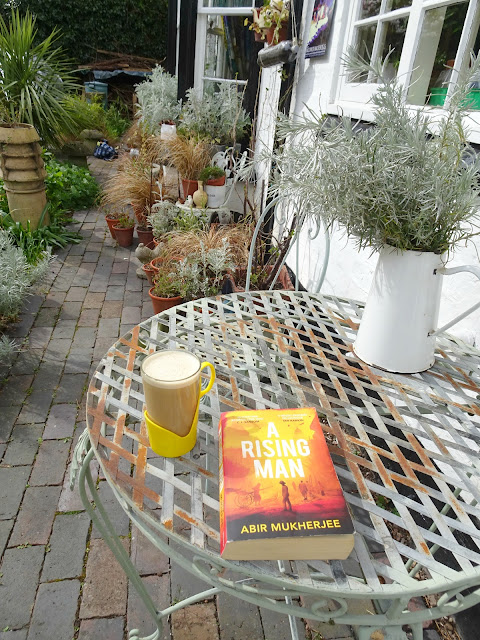 I went off in search of another book to read and came across this on the bookshelf, 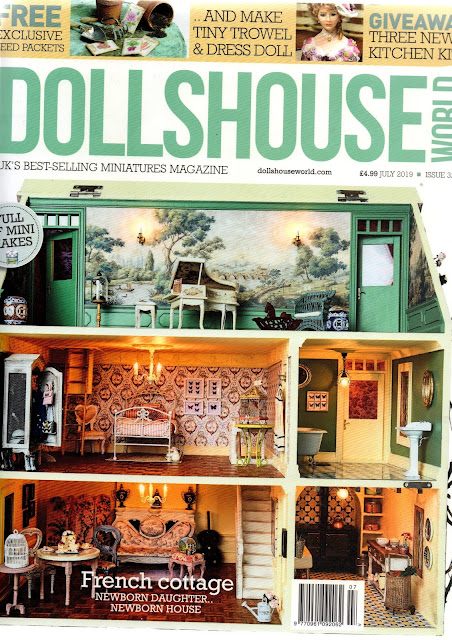 In all the excitement of last year's festival season, I never got round to sharing the interview I did with Dollshouse World in July last year. 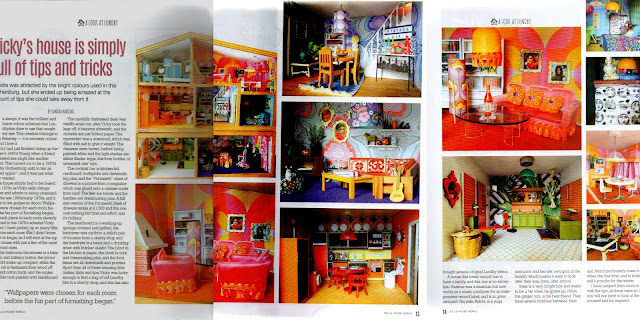 Inspired by the article I gave my Lundby a much-needed dusting. 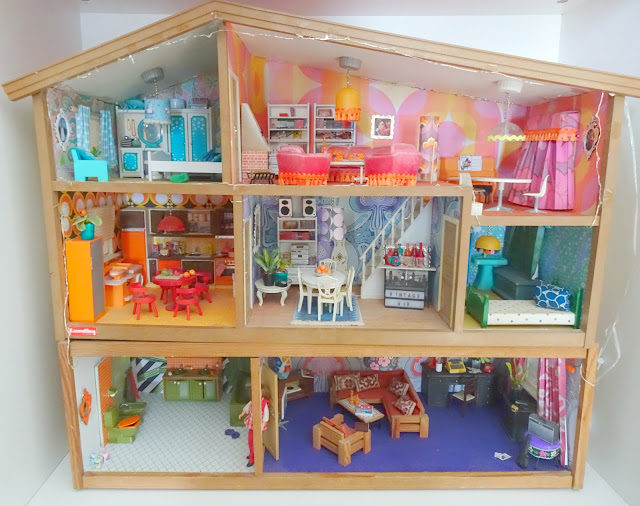 As planned, we had yesterday's sabzi for tea accompanied by a garlic nan from the freezer. We watched Race Across The World and a couple of episodes of Civilisations on the i-player and then took myself off to bed with my latest book, a marvellously dark Norwegian thriller. 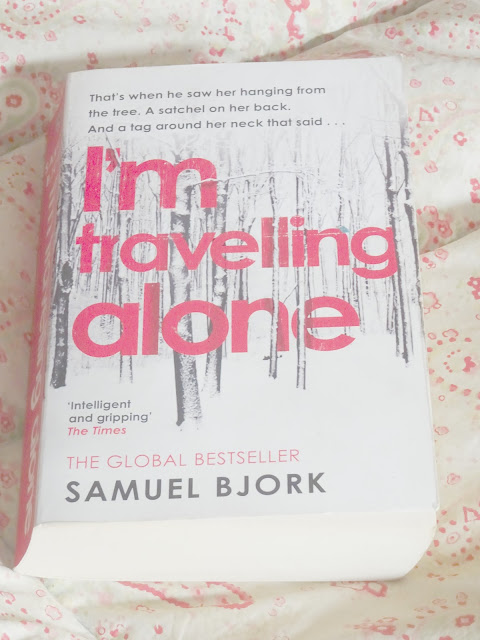 Monday (Day 17) started with a Wii Fit workout and, when Jon got up, we ate the last of our fruit with yoghurt. We got dressed and walked down to Johal's, stocking up on the essentials (fresh fruit and veg, yellow split peas, spicy noodles, tinned chickpeas and tomatoes, butter, paneer and incense). 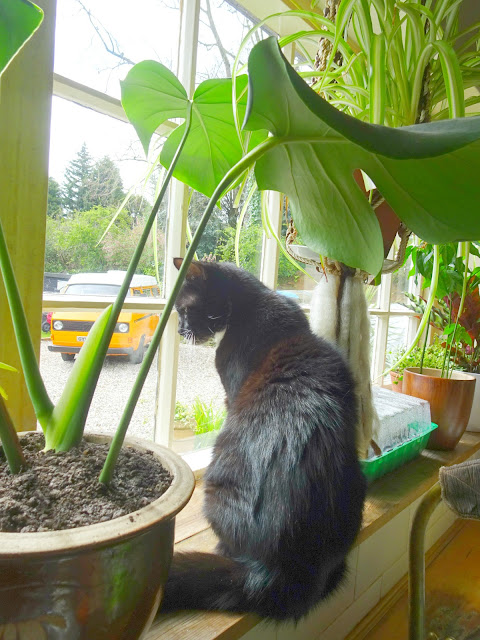 Back home Jon kept his gloves on, washed the fresh fruit & veg and disinfected the packaging he couldn't remove while Stephen Squirrel sat watching cat TV.  He can spend hours chattering at the birds on the feeders and grumbling at Frank through the window. 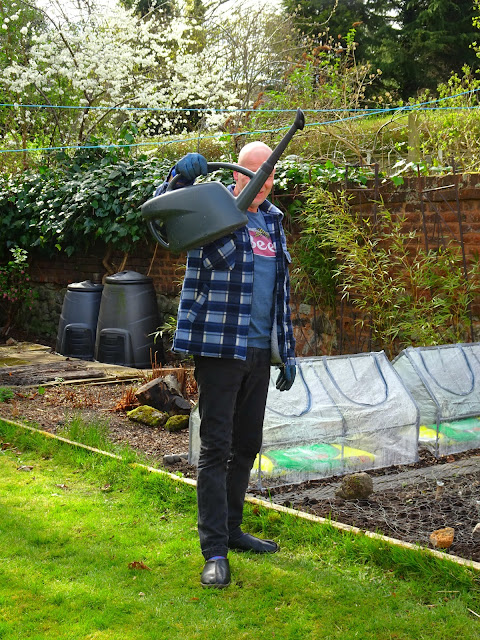 After a restorative mug of tea, Jon planted some purple sprouting broccoli and some chilli bush seeds and covered the bed with some chicken wire as he'd had to shoo off some portly wood pigeons earlier. 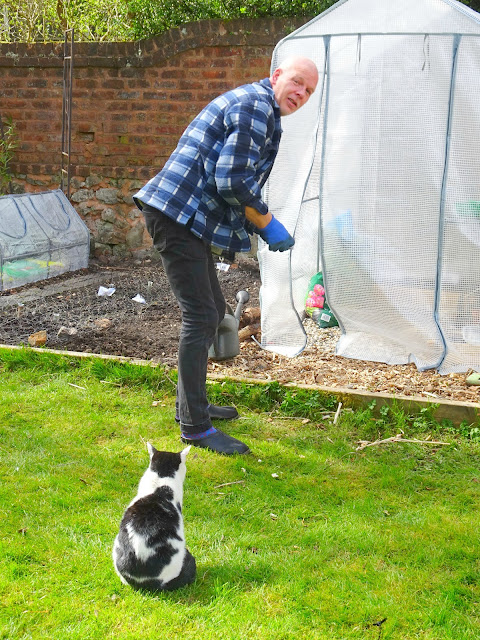 As always he's followed around the garden by his shadow. 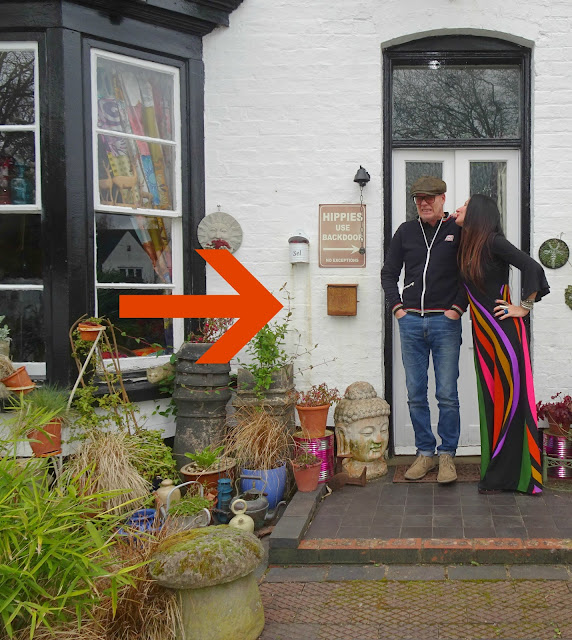 My vintage enamel salt cellar left an ugly stain on the wall. When I can be bothered, I use Picmonkey to airbrush it out of the photo but Jon had rediscovered some masonry paint when he tidied out the coal house so I gave the wall a tickle with it. 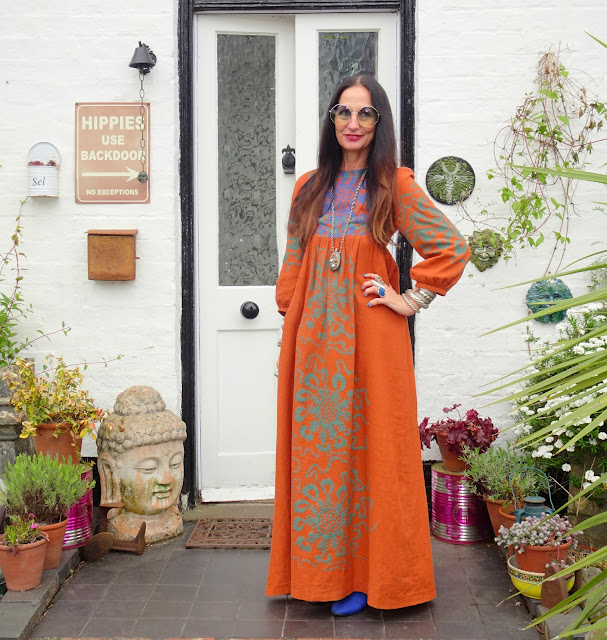 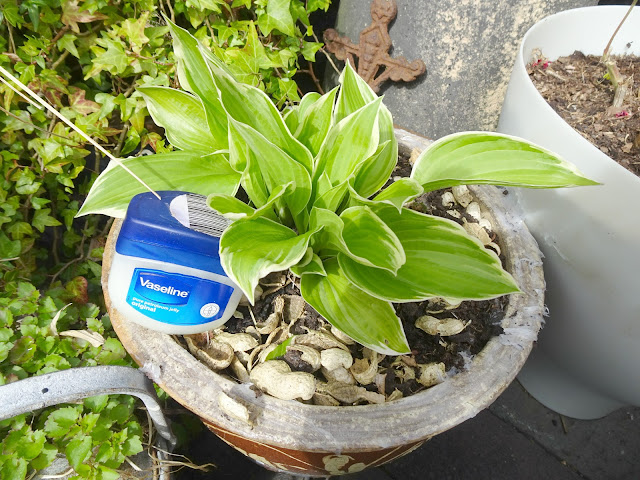 Last year when I asked Cherie how her hostas looked so healthy whilst ours were decimated from slugs she told me that she applied a layer of Vaseline around the edge of the pots to deter the slimy creatures. As our hosta is starting to spring back into life, I followed suit.

After spicy tomato noodles from Johal's, I swept the upstairs carpets - as they're not fitted, I suppose technically they're large rugs although they're far too big and cumbersome to take downstairs and beat on the washing line. I've mentioned before that we don't own a vacuum cleaner, just a dustpan and brush, it's a great weekly workout. 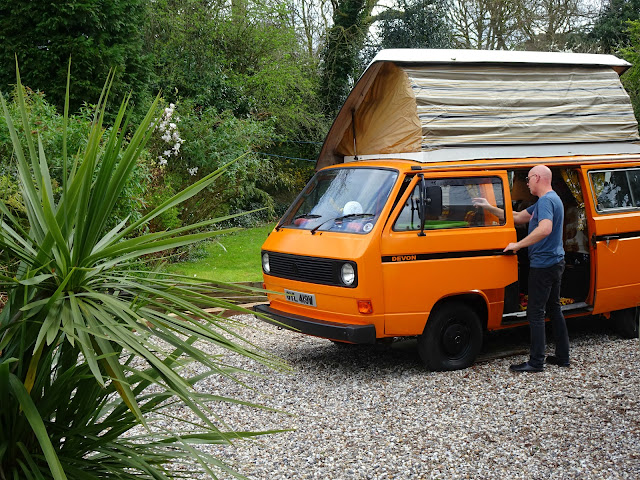 Jon spent the afternoon sorting out the contents of Gilbert. He commented on how badly I was limping, my unoperated hip's been really stiff over the last few days, so I took myself off for a walk around the block. We live in a really quiet part of town so, when I encountered other people (three couples, the postman plus a lone jogger), I was able to maintain a safe distance by walking in the middle of the road with no danger of being ploughed down by oncoming traffic. What with this morning's trip to Johal's, that's the fourth time I've ventured further than the garden gate in 17 days! No wonder I'm stiff. 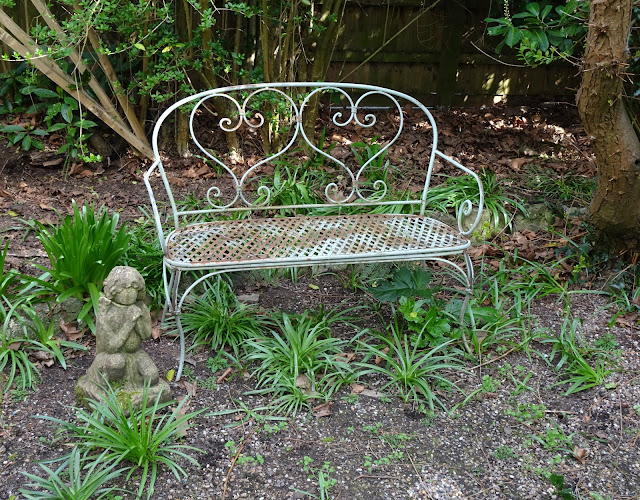 I did attempt to sit outside spend the rest of the afternoon reading but soon came scuttling back indoors. I don't know about this warm spell of weather the BBC keep banging on about, there's certainly no sign of it around here.

Jon's making a Mediterranean mixed bean stew for tonight's tea, which we're having with a cheese & tomato flatbread he found in the freezer, it's labelled as best before 10th June 2019, we do like to live dangerously.

Email ThisBlogThis!Share to TwitterShare to FacebookShare to Pinterest
Labels: Doll's House, Gardening, It's All About Me, Jon, Our House, Outfit, Pets