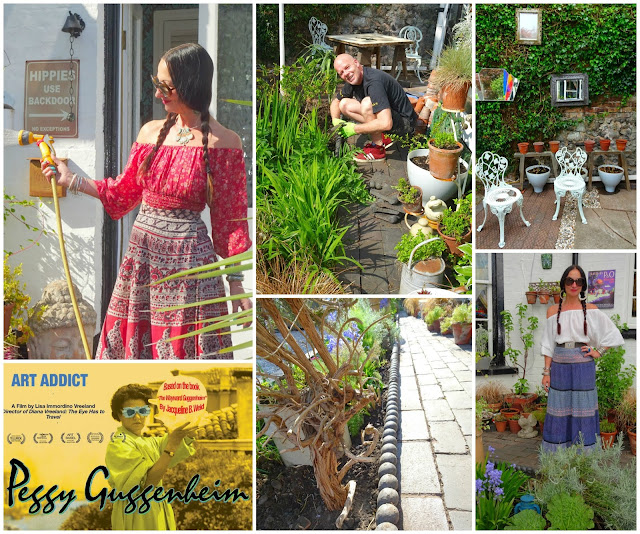 As always, I woke up at the crack of dawn yesterday (Saturday) but forced myself to stay in bed so Jon could get up first and bring me a mug of tea. I lay in until 9am, finishing my current book, then joined Jon in the kitchen for coffee and wholemeal toast. We have two slices each,  Jon slathers his in butter, I have one spread with Morrison's yeast extract and the other with Whole Earth crunchy peanut butter and no butter. 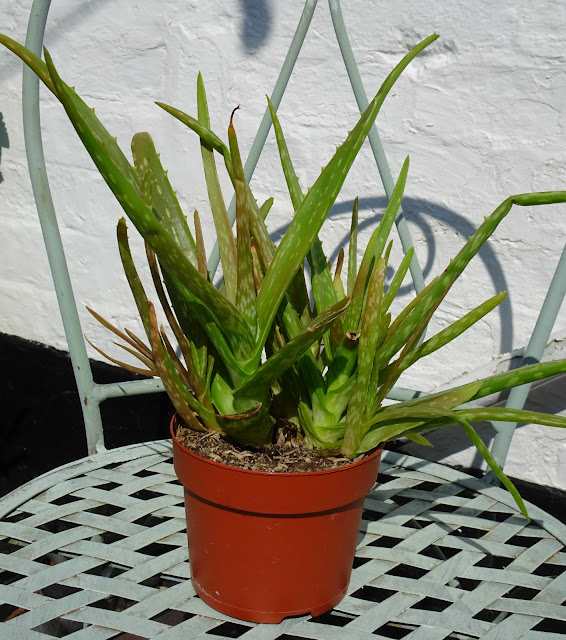 After breakfast, I stripped the bed, loaded the washing machine and put back the houseplants which I'd left soaking in the bath overnight. My aloe vera was looking a bit sick so, remembering that I had half a bag of cacti compost stashed away in the coal house, I split the plant up and repotted the components into five of our terracotta pots which, according to some internet research, aloe vera prefers. 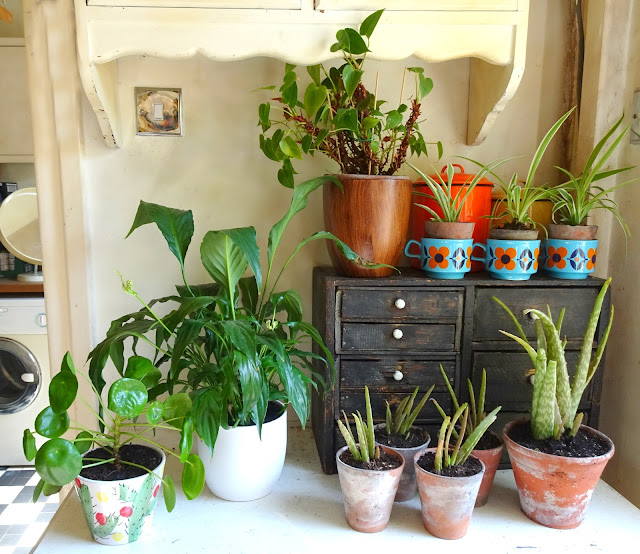 I put the rest of the plants in the bath, gave them a good spray, swapped them around the house to give them a change of scenery and then gave the bath a thorough scrub. 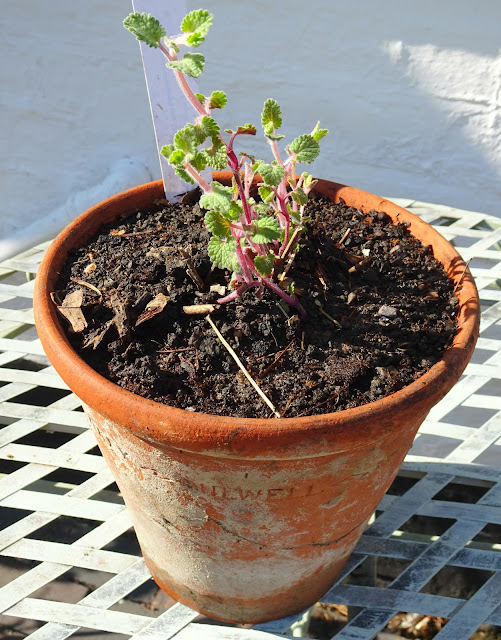 The postman delivered the Nepeta (catmint) I'd found on eBay to replace the one Frank had decimated. I pegged the washing out on the line and potted up the new arrival, keeping it on the windowsill outside for now (and away from Frank!) Jon watering the seedlings and reported that the rocket he'd transplanted yesterday was doing well and that the purple sprouting broccoli had made an appearance.

Then he made a box to cover and house the socket for the outdoor lighting, using scraps from the woodpile and some shed felt he had knocking around. He just needs to add a door now. 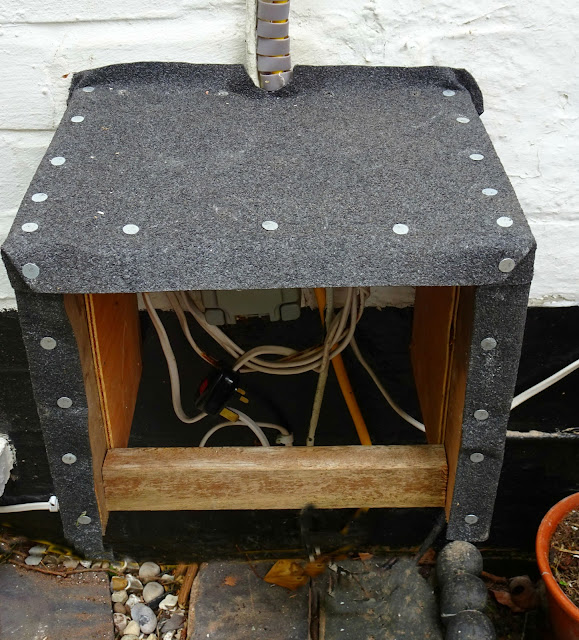 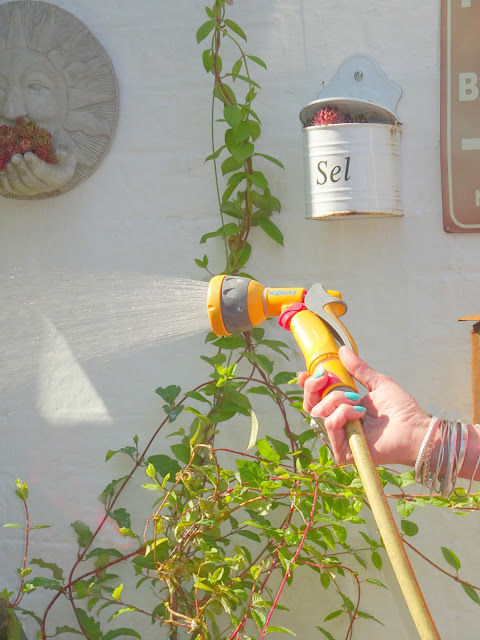 I watered the pot plants then sat and contemplated for a while, coming up with a solution to avoid the plants in the bed growing over on to the paving bricks and being trampled (by us and the cats). I grabbed a spade, dug out a channel at the back of the bed and then took a break for noodles. 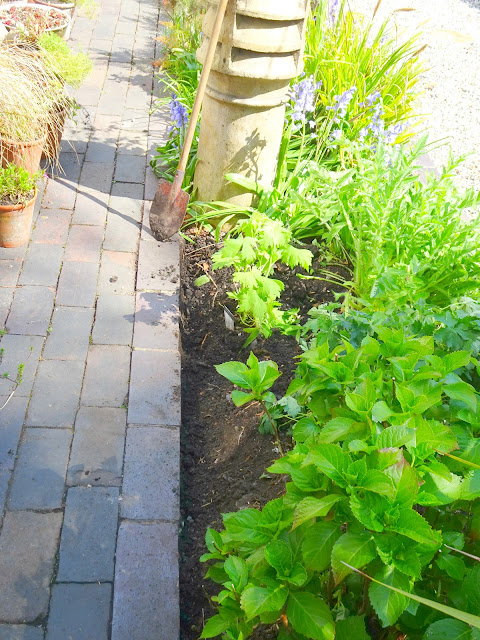 After lunch I moved some of the Edwardian edging tiles from the pile we'd created next to the woodshed and positioned them into the newly dug channel, at this point Jon took over, hammering them into place with a mallet as I lacked the brute strength to do it. 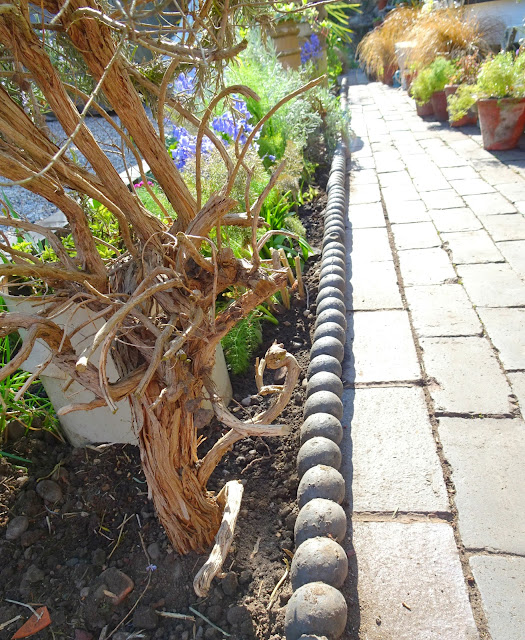 I can't believe how good it looks, why on earth hadn't we thought of doing this before? Having the time to sit quietly and ponder on the things that surround us really is doing wonders for our home. 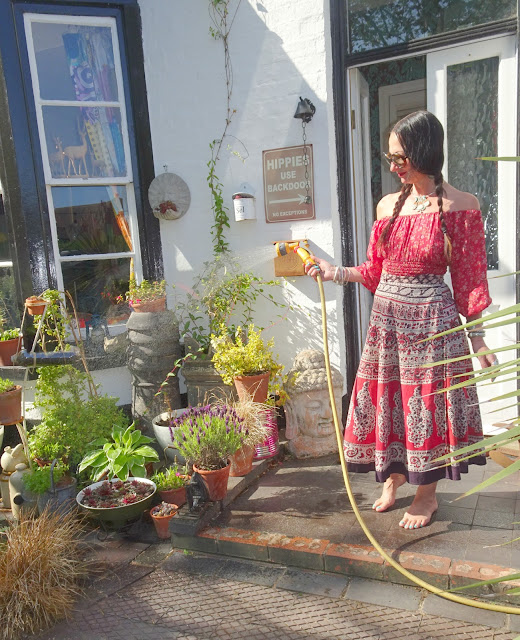 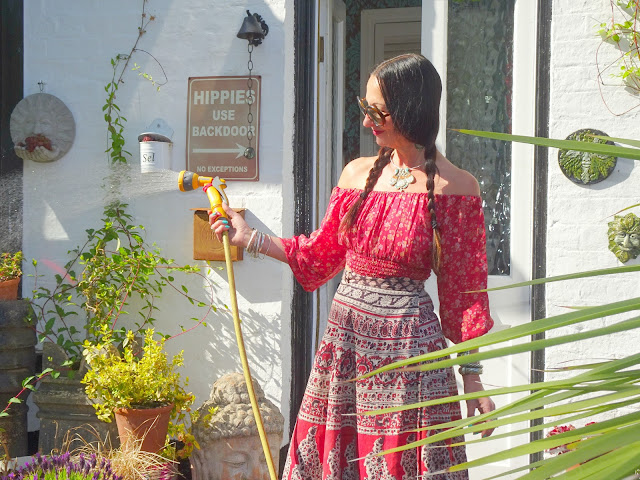 As it was Self-care Saturday I deep-conditioned my hair before showering, epilated my legs, dyed my eyelashes and stripped off my nail paint ready for repainting in front of the TV later. Jon showered and gave the shower cubicle a thorough deep clean before cooking tea, some spicy home-made jacket wedges with baked beans & grated cheese. 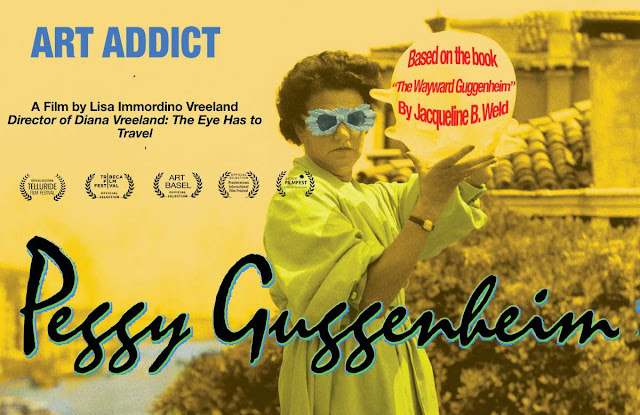 Before the season finale of Scandi-noir series, Twin, we watched an absolutely wonderful documentary about Peggy Guggenheim on the BBC i-player. Not only was she a fascinating woman but her style was incredible. Needless to say, rum was consumed. 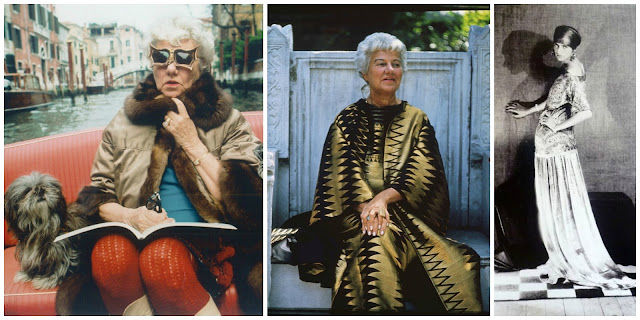 This morning I was up at my usual time, I watered the seedlings on the kitchen windowsill, fed the cats and brought mugs of tea back to bed. Once we were up Jon put the sausages in the oven and we sat outside in the sunshine drinking coffee and contemplating the day's jobs. After breakfast, we dressed and got started. 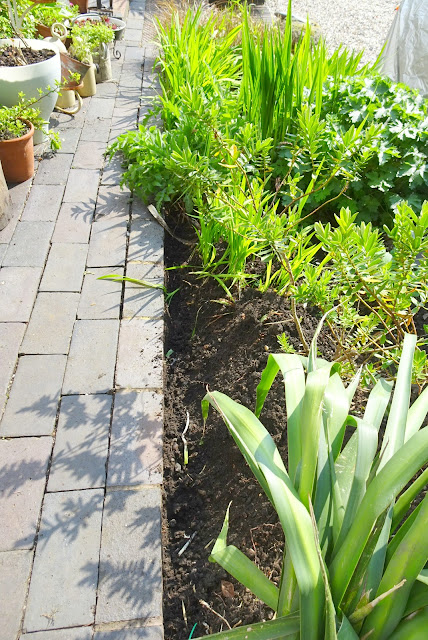 I dug out a channel at the back of the other bed (the one that runs beneath the lounge window) and carried up more of the edging tiles from the pile, whilst Jon whacked them into place. 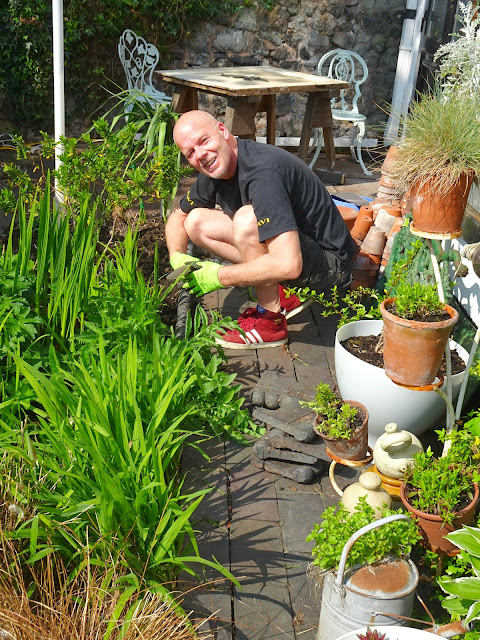 Ta-dah! Can you believe we rescued these from the parental home a decade ago and hadn't thought of using them this way before? On Beate's recommendation, I planted the new nasturtium in the flower bed beneath the kitchen window, repotted a rather feeble looking Fuschia, moved the euphorbia I'd picked up on our daily walks and a Festuca glauca (blue fescue) I'd had for years, then gave everything a thorough watering. 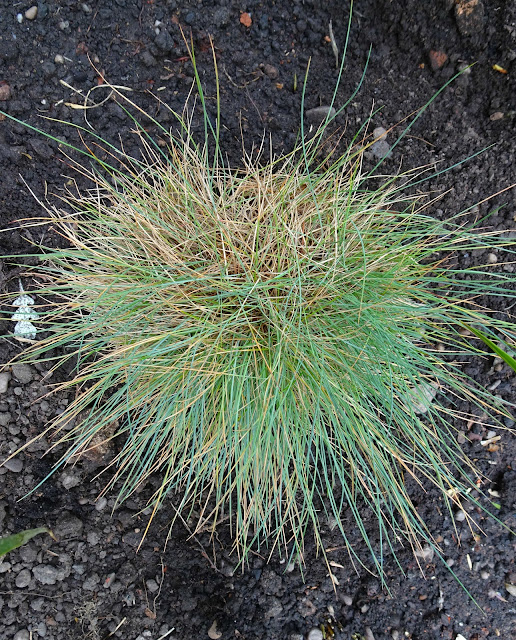 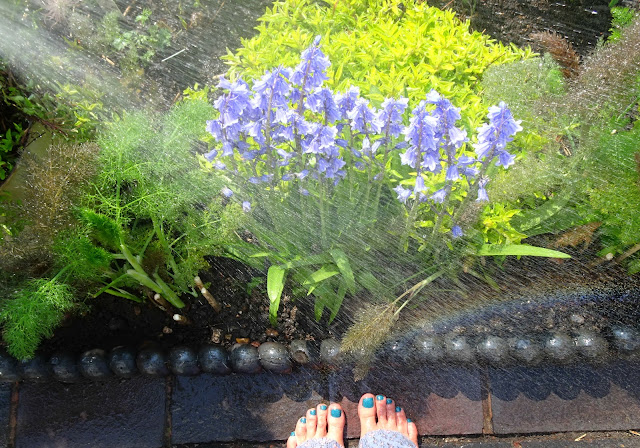 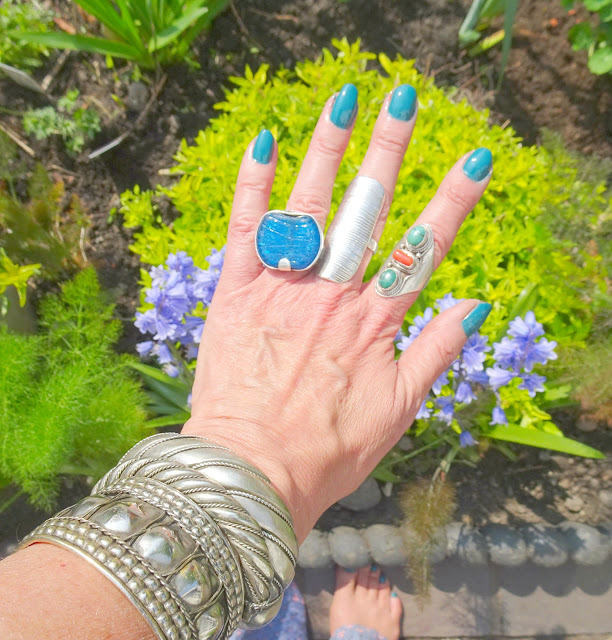 I missed this cast iron chair (another skip find) when I painted the others last week as there were a pile of plants on it and I couldn't be arsed, but today I decided to scrub it down and give it a coat of paint to match. 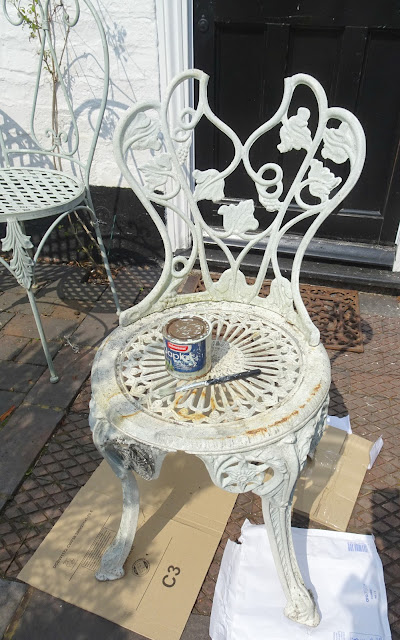 Much better! Jon spent most of the afternoon fixing the outdoor lighting cable to the garden wall and attaching it to the mains electrical supply. In an attempt to conceal the bright yellow flex, he dragged out these ancient tressels we'd rescued from the parental home. Hopefully, I'll be able to find some trailing plants to fill the pots. Any suggestions for suitable plants? I'll attempt to go online first thing tomorrow and order some. 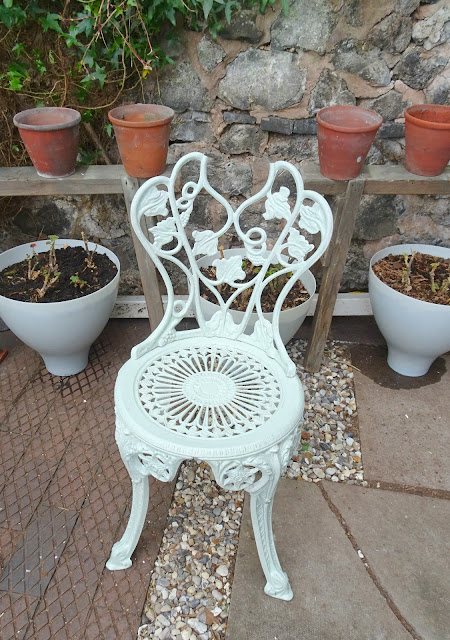 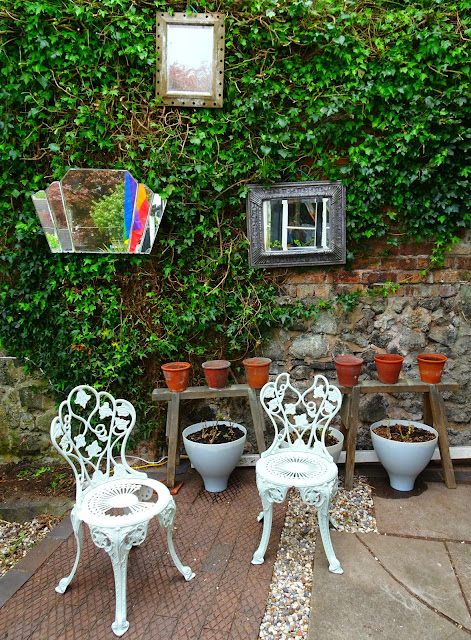 I gave my hair its weekly wash yesterday and yet again managed to plait it successfully, it's becoming a lockdown habit. 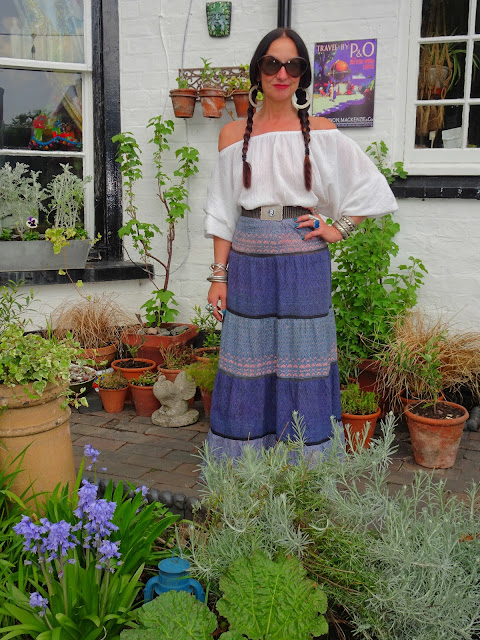 It's clouded over now and feels suspiciously like rain is on the way but it has been yet another beautiful day. I'm wearing a 1970s India Imports of Rhode Island block printed maxi skirt (an eBay find from last year) and an off-the-shoulder top bought for £1 from the charity clearance shop in the week before lockdown. The Cleopatra buckle belt was another of last year's charity shop buys. 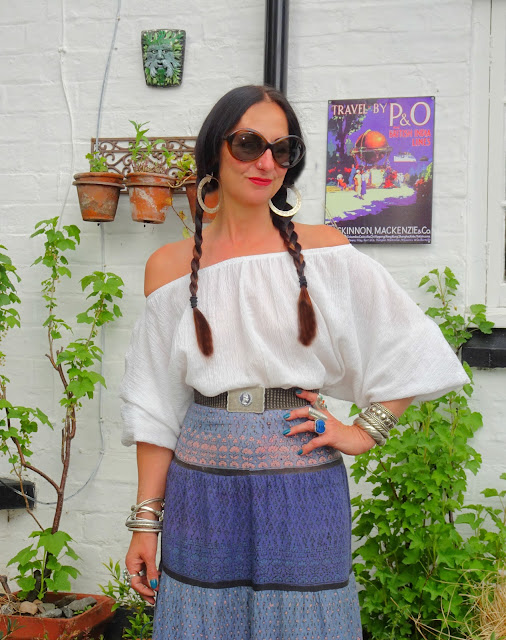 When I was putting in my new plants on Friday morning - horror of horrors - I snapped my trowel in two! In our previous existence, we'd have searched the car boot sales until we'd found a suitable secondhand alternative, but in this strange new world, Jon ordered me a new replacement online and it arrived within 48 hours. The gardening can continue! 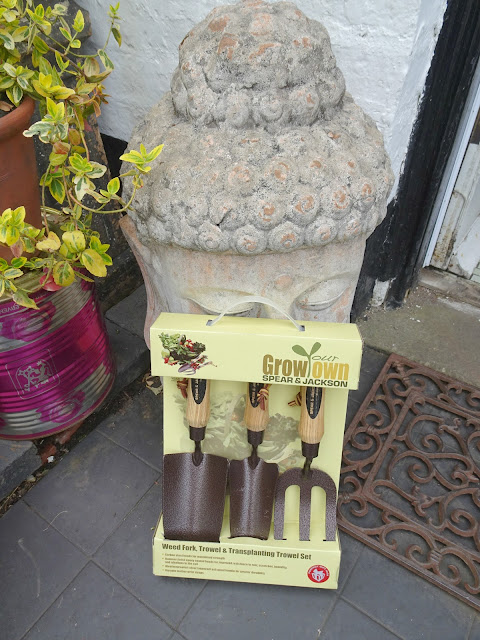 We haven't been for a walk since Friday as Jon reckons I've worked him to death and he can no longer move. Instead, he's on kitchen duty, trying out a new dish, spicy potato wraps, based on this recipe found on the BBC website. As is usual on a Sunday we don't bother with lunch as we're still stuffed from our veggie sausage sandwiches. He's got to use his imagination as we haven't got fennel seeds, fresh coriander, mint or lime but who follows a recipe to the letter, anyway?


Tonight we'll be watching the series finale of  Race Across The World and the second episode of Killing Eve. Thank goodness for the BBC, keeping us entertained with top telly.

Stay safe, sane and healthy and let me know how life in lockdown is treating you.
Posted by Vix at Sunday, April 26, 2020

Email ThisBlogThis!Share to TwitterShare to FacebookShare to Pinterest
Labels: Gardening, It's All About Me, Jon