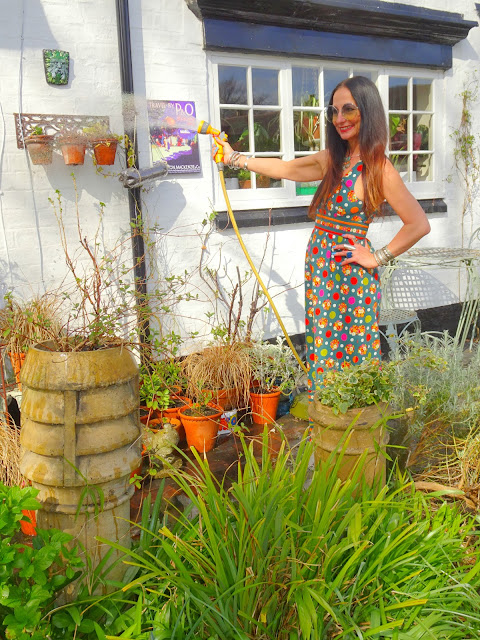 Over our fruit & yoghurt, I mentioned to Jon that at some point we'd need to turn the rug around in the spare room as it was getting rather threadbare and that the bed in there was wonky so he got dressed and got stuck in. In the past, he'd have told me that he'd get round to it when he'd got a day to spare. I'm quite liking this new normal. 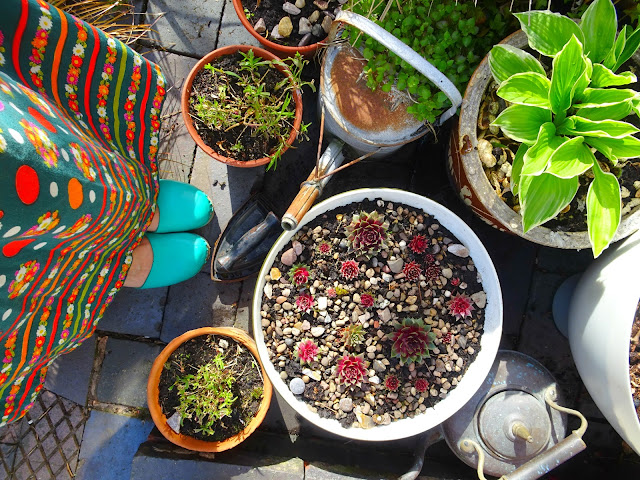 Whilst Jon was working upstairs I watered the pot plants in the garden and potted up some shoots. It finally felt like the glorious weather we'd been promised last Saturday had arrived. Off came the long-sleeved Afghan dress I'd put on earlier and out came my Van Allen maxi dress from the suitcase of summer clothes I keep on top of the wardrobe. 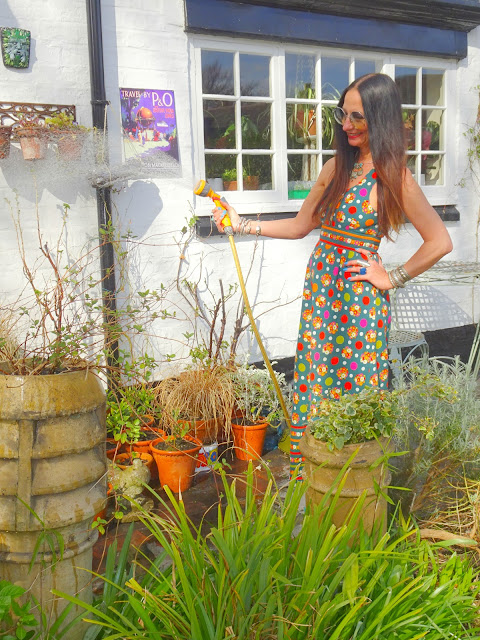 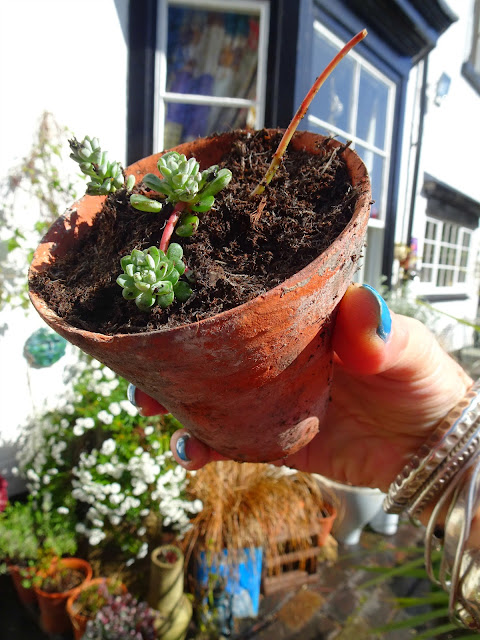 After lunch, Jon joined me for a walk around the block. I'd spotted a couple of skips yesterday and he was keen to see if there was anything interesting in them. We noticed one had a couple of gorgeous stripped four-panelled Edwardian doors complete with beehive doorknobs (people around here have more money than sense) but the house was empty and the skip was securely fenced off so we couldn't liberate them. 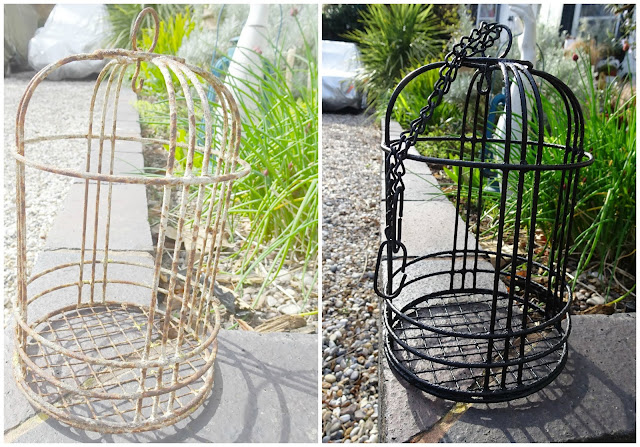 Jon did some work on Gilbert whilst I sat in the sun and sanded down this vintage birdcage which has been lying around the garden for years. Jon just happened to be spraying his wheel trims matt black so he offered to do my cage at the same time. Looks a lot better, doesn't it? 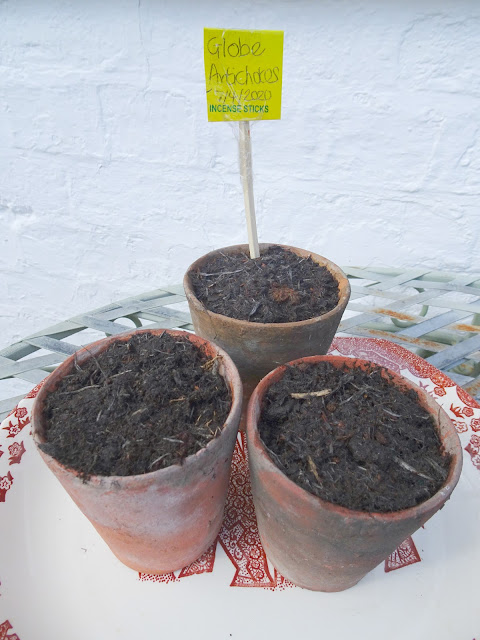 I planted a few more seeds before going inside, catching up with my blog reading followed by a  shower. 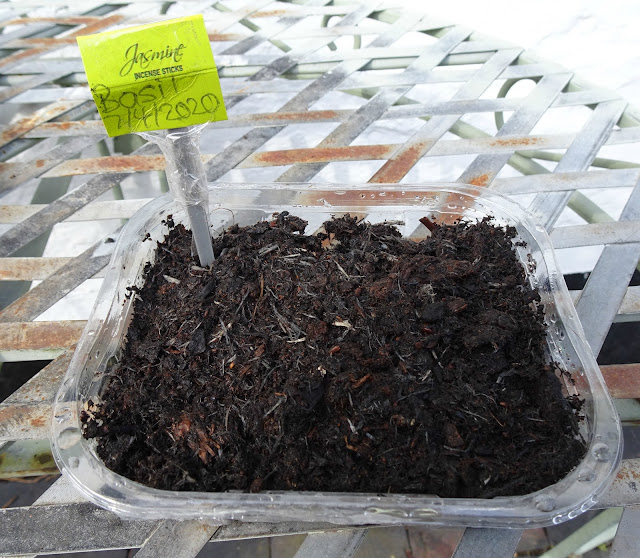 Jon made vegeburgers and salad for tea and we watched a couple more episodes of Civilisations on the BBC i-player. I went to bed and read more of my book and Jon stayed up till late working on his latest music project. 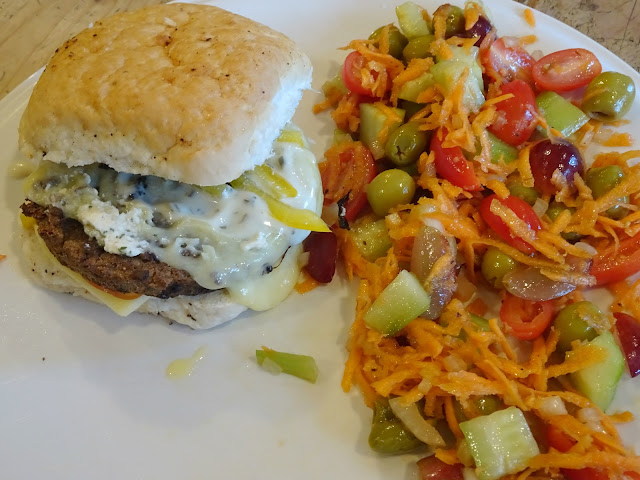 Today (Day 19) started with Wii Fit and fruit & yoghurt then I sat at the PC for an hour catching up with blog comments. Once dressed I got down on my knees and prised all the weeds and moss from between the paving stones with a butter knife. As I'm visible from the road, a couple of friends saw me and popped into the garden for a chat (at a safe distance!) 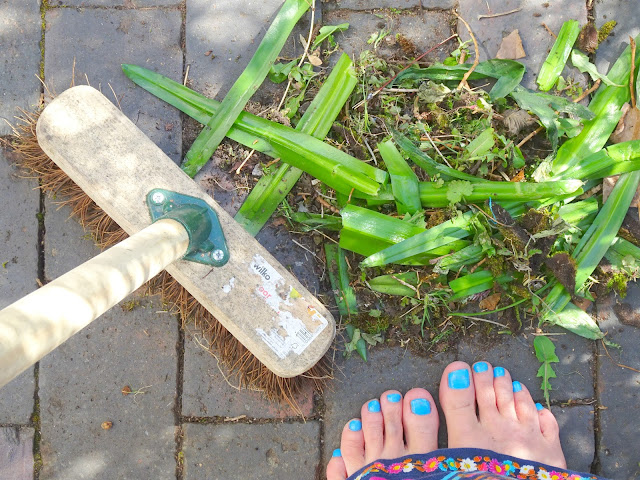 It took me the best part of the morning to get everything out of the cracks but no matter, I've got all the time in the world. 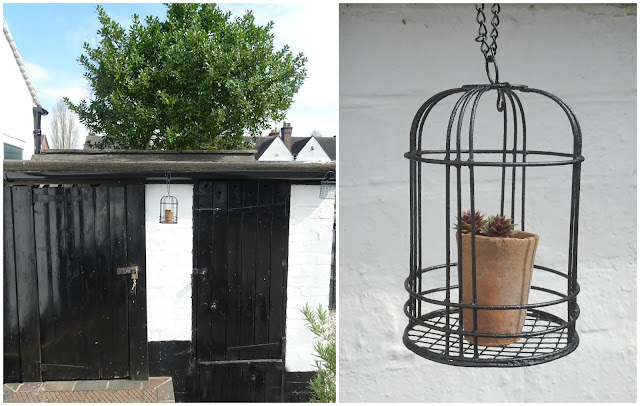 In the absence of any trailing plants, I popped a potted houseleek in my spray painted cage and hung it from the guttering attached to the coal house and garden store. 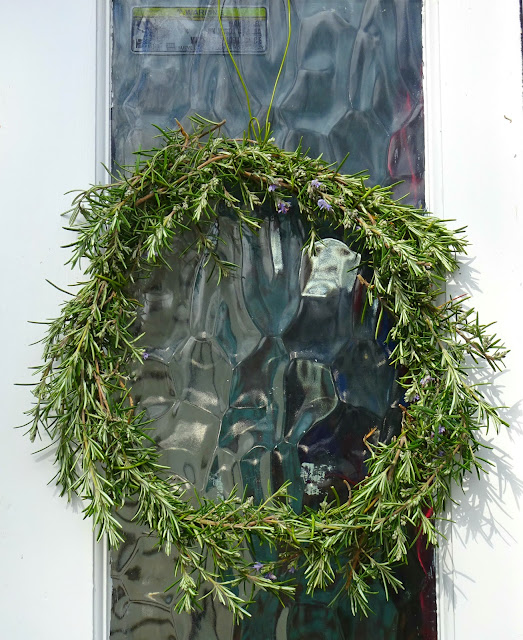 Remember the rosemary wreath I made at Xmas? After our lunchtime noodles, I sat in the sunshine and wove another. According to old English folklore not only does rosemary encourage elves and deter thieves, but it is also said to act as a protector against plague. We need all the help we can get! 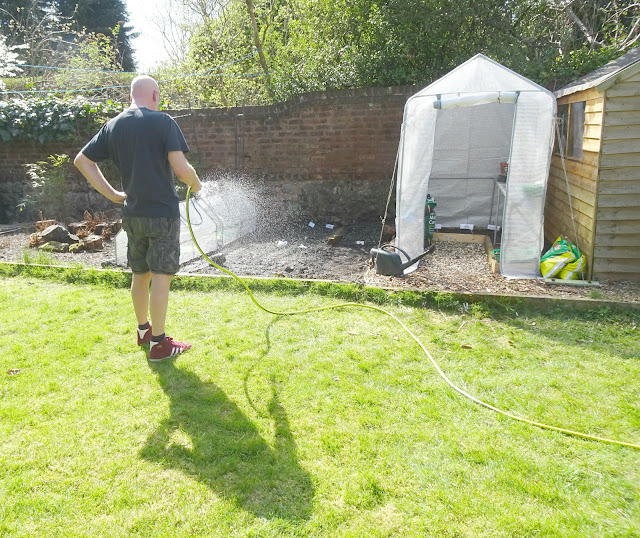 Jon transplanted the sprouted radish seedlings outside, sowed some French beans in pots and gave everything a good soaking. 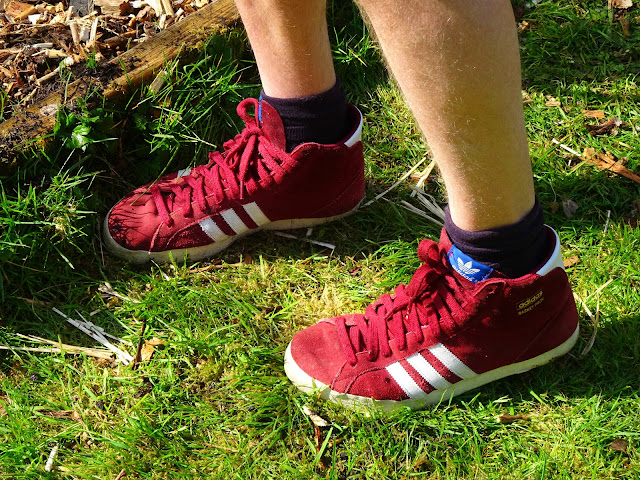 He bought these Adidas basketball tops from a fiver from a charity shop the week before lockdown. No point in saving them for best! 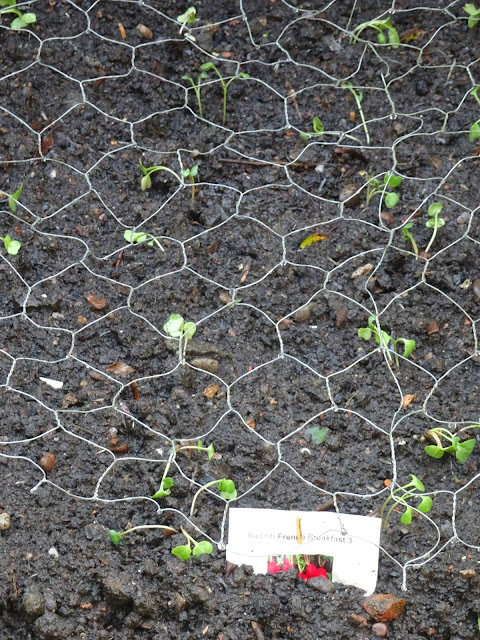 These lead shapes are part of an Edwardian bird scarer I found in an outbuilding in the parental home when I cleared it. Over the years the string had rotted away so we sat on the grass and rethreaded them. 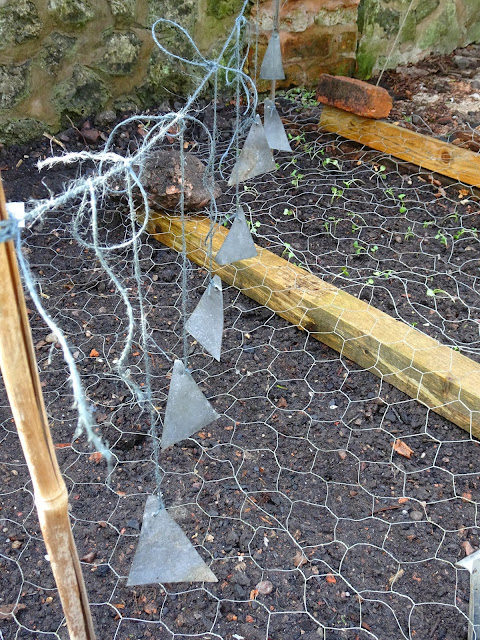 We went for another walk around the block. Thank you so much for your kind words, increasing my movement has definitely helped and my hip's feeling a lot freer. 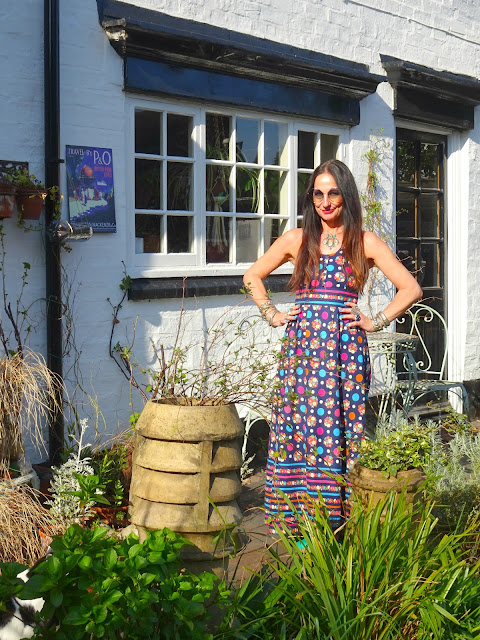 You're not seeing double, today's dress is the non-identical twin sister of yesterday's. I bought them as a pair from eBay 15 years ago from the original owner who bought them in 1970. The note she enclosed with them said that she worked as a Saturday girl in Van Allen when she was a Sixth Former and used her staff discount to acquire them. She wore one of them to the Isle of Wight Festival in 1970, so it breathed the same air as Jimi Hendrix!

Ever fancied joining me for a limp stroll around the garden? Let's do it from a safe distance! When I turn around it's because I can't get beyond the tumbledown shed, there are another 20 yards of the garden beyond it. Maybe that'll be another task we accomplish during lockdown. Anyone got a goat we can borrow? 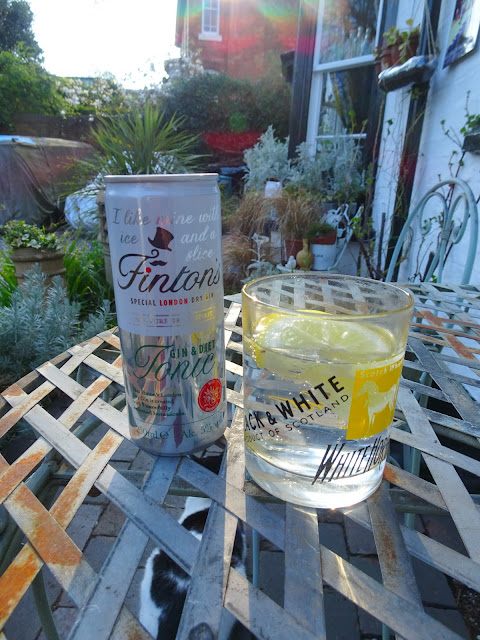 It's Wednesday night which means....booze! We've started early with some class in a glass, a can of supermarket own-brand gin and tonic, leftover from last year's festival season. 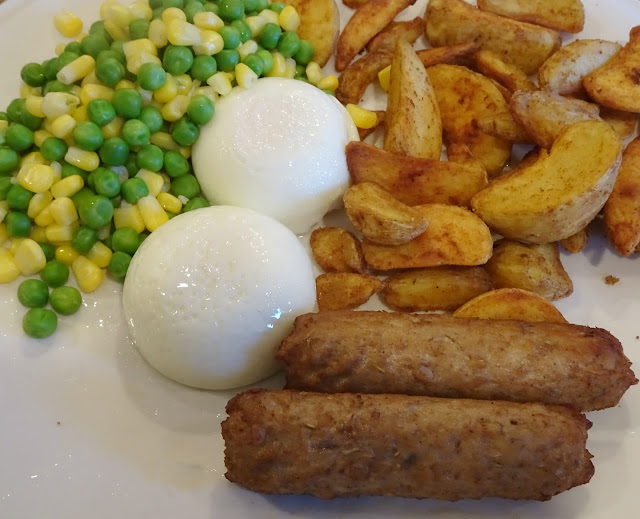 I'm loving Civilisations but I'm not sure if we've reached the end of the series. The Odyssey is currently on the BBC i-player and I do love a subtitled film.  Either way, it looks a night of rum and culture is in store.