Batten Down The Hatches - It's Lakefest 2019 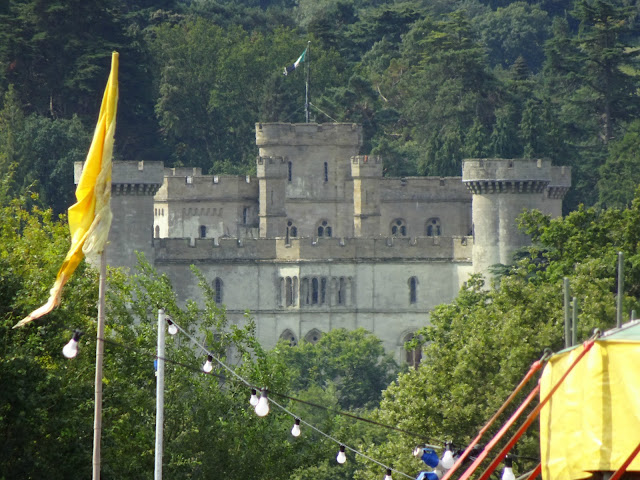 Last Wednesday morning we headed to Eastnor Castle, just outside the historic town of Ledbury, for Lakefest. The weather forecast was horrendous and several other UK festivals scheduled for weekend had been forced to pull the plug but setting up in hazy Herefordshire sunshine the predicted storms seemed like a world away. In just under eight hours we'd set up, eaten and gone to bed early, waking up the next morning refreshed and raring to go. 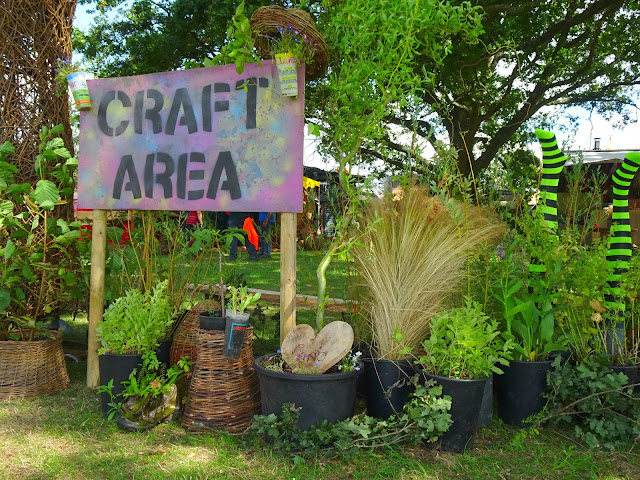 The following morning we put a few finishing touches to the stall, explored the site and, after a lazy lunch, got changed, poured ourselves a drink and awaited the arrival of the general public. 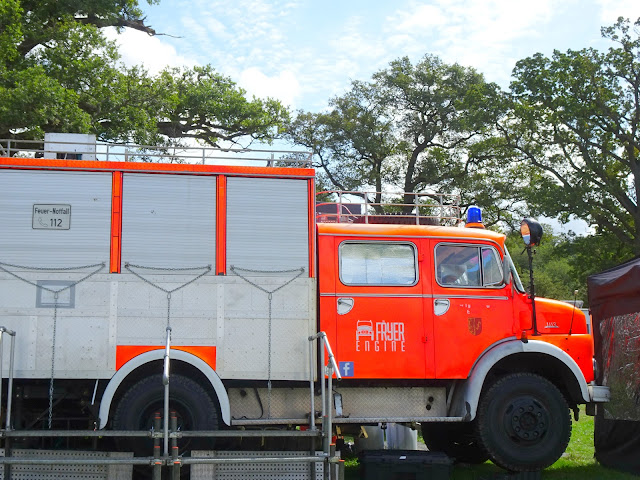 To be perfectly honest we weren't sure about returning to Lakefest after the organisers had announced that the festival was going cashless. While we could understand their reasons for doing so - apparently parts of the site were plagued with theft last year, including over £25,000 reportedly stolen from the bar - we weren't at all keen on the idea of our takings going into the festival's bank account and having to wait for our cash but the organisers had promised to pay the traders what we were owed on the Saturday evening with the remainder being transferred the following week and as the festival we'd booked to trade at the following weekend had gone into administration we felt that we didn't have a lot of choice. 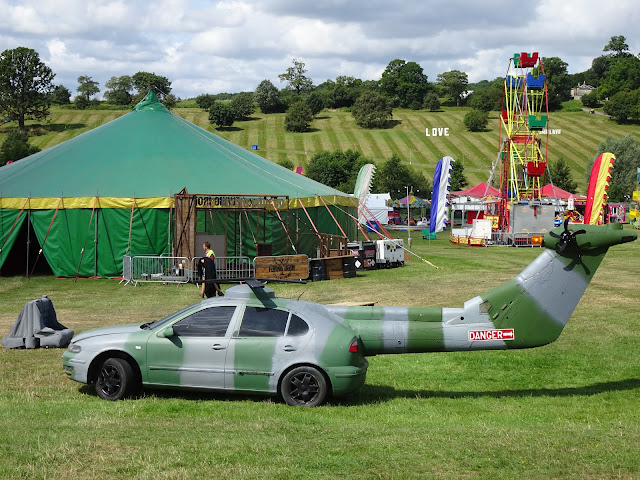 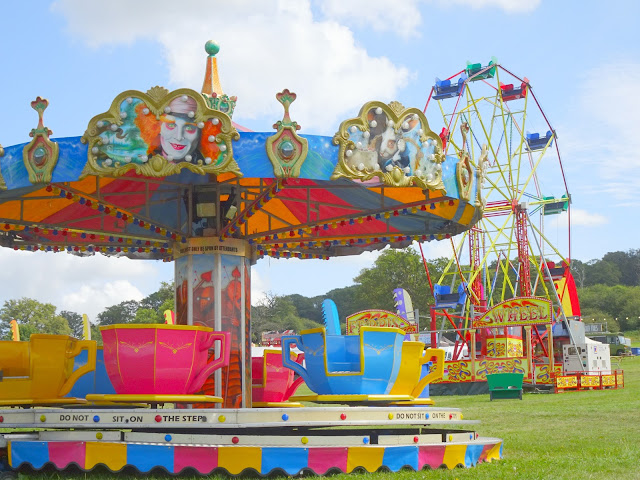 Thursday afternoon and ready for business! 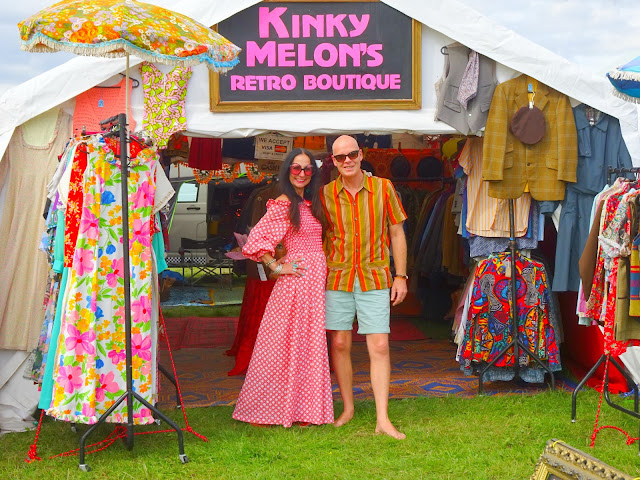 Thursday's trade was slow but no matter, there were three more days to catch up. 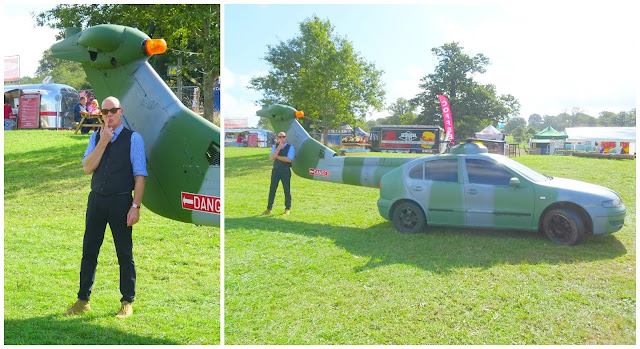 Friday morning started off bright and sunny and we were able to pose for photos before opening the shop at 10am ... 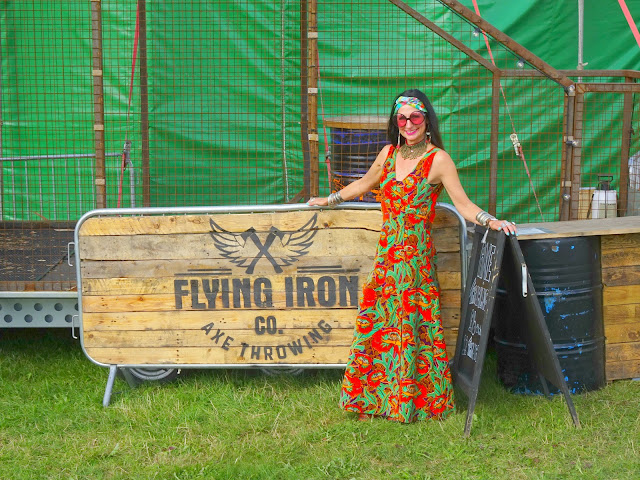 But within half an hour the heavens opened and pretty much continued for the rest of the day. 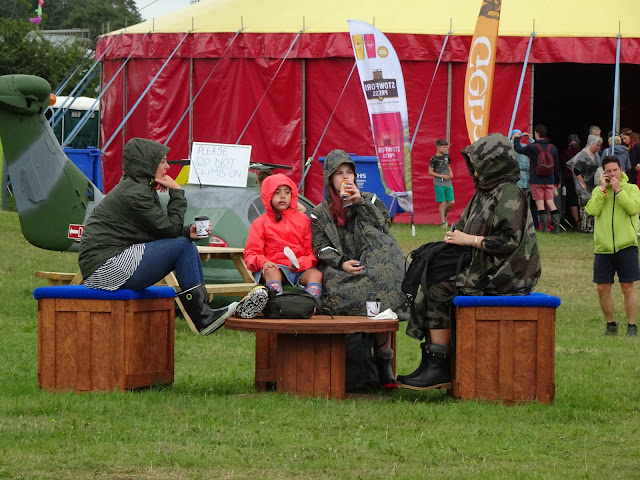 When you're a festival trader you do become mildly obsessed with the weather but believe me, it has a knock-on effect on sales. The odd shower is fine but with constant rain the entire festival dynamic changes, people go into survival mode, cracking open the alcohol early and seeking shelter - shopping is the last of their concerns (which is fair enough, it's exactly what we'd do, too). Trade wasn't a total washout though, just like at the Cornbury Festival a couple of years ago, The Kaiser Chiefs popped in, bought a few things and declared our stock to be amazing. 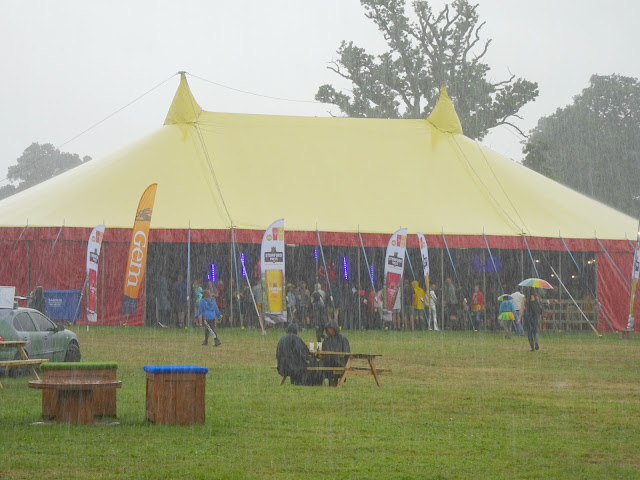 And what's a bit of rain when you've got the phenomenal Dreadzone....

and Bez with his Madchester themed DJ set?

Business picked up during the evening and we didn't have too bad a day in the end. We closed just after 10pm and headed off to catch the Kaiser Chiefs inside the main tent - marred somewhat by the number of annoying w*nkers filming the entire set on their phones and the inconsiderate tossers who, despite there being a ban on camping chairs in the arena after 5pm, ignored the announcements and stayed put (some fast asleep and others playing games on their phones and ignoring the band), meaning that many of the crowd couldn't get undercover and had to stand outside to watch in the torrential rain. 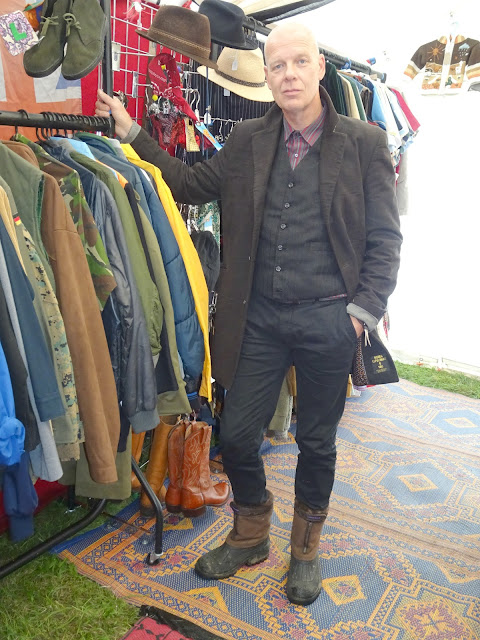 With gale force winds in excess of 50 miles per hour forecast, Saturday was the day we were dreading. We'd already gone overboard securing the stall with market clamps, ratchets and extra tent pegs but Jon added a couple more ratchets just to be on the safe side. The calendar might have said summer but the temperatures were anything but hence my sheepskin hat and Jon's overcoat. 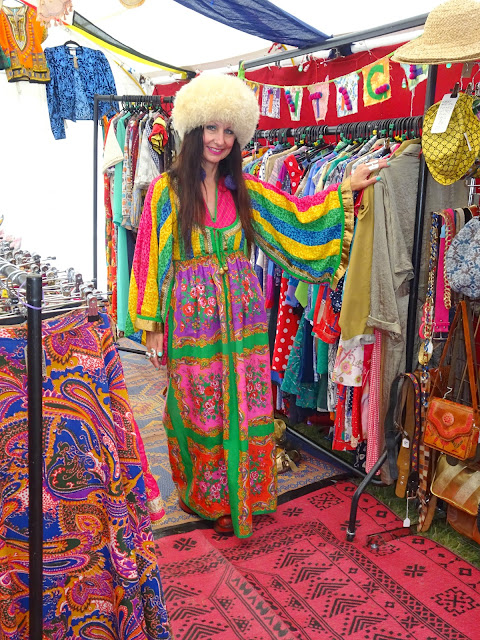 We spent most of the day chasing stock that had blown off the rails or rushing to our neighbours' assistance, holding on to stalls to stop them blowing away. Across the way the jerk chicken shack lost its roof and several traders made the decision not to open. Disappointingly none of the festival organisers bothered to check whether we were okay. 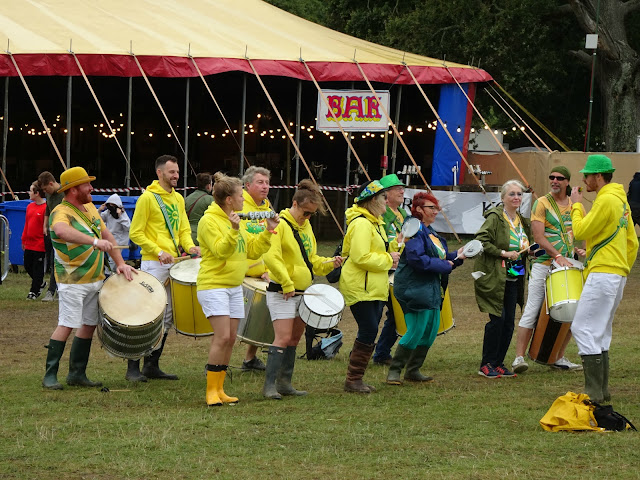 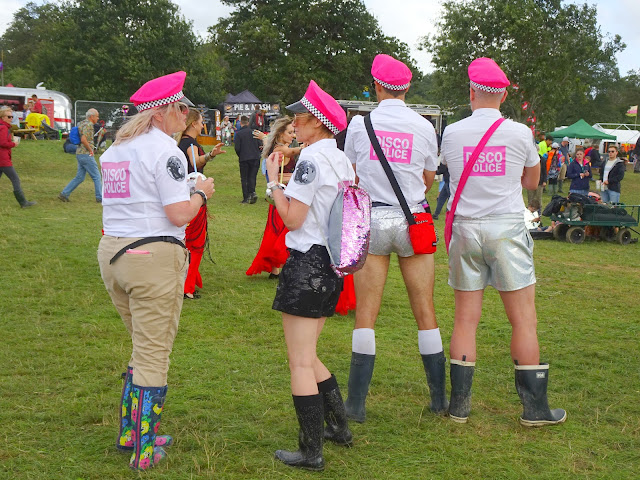 Again most of the punters went into survival mode and sales were slow which, on the plus side, meant we could take it in turns to watch The Bluetones and reggae legend Dawn Penn.

Despite the assurance that our takings would be issued to us on Saturday evening, by 10pm nothing was forthcoming so we closed the shop and went down to the main arena to catch the joyful madness that is the Happy Mondays. 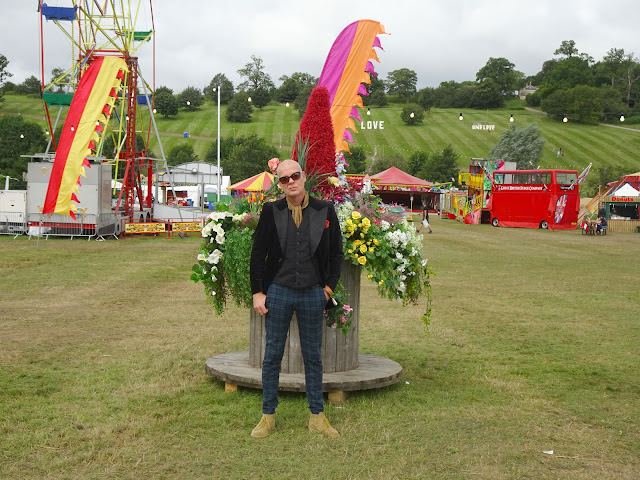 On Sunday morning we were thrilled to discover that the wind had dropped and it felt quite warm. 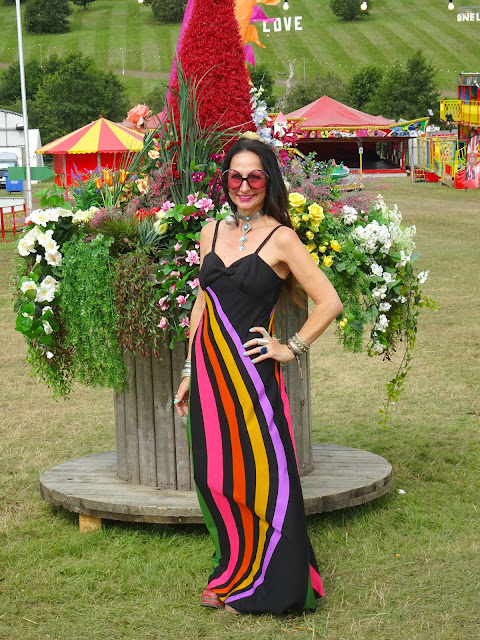 The BBC reckoned there would be hail and thunder until 11am and then it would be dry all day - wrong!! It started with hail and thunder ....then the rain arrived in biblical proportions and the temperature plummeted. By lunchtime the site was a mud bath and the sky vibrated with thunderclaps. Walking to the loo meant taking your life in your hands as people slipped and slided left, right and centre. 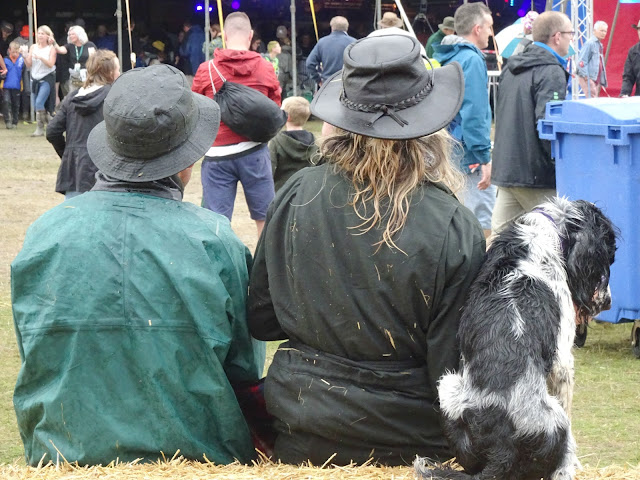 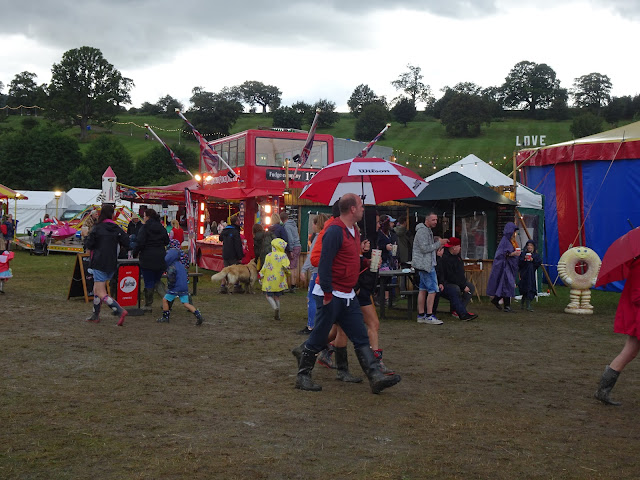 Paul Young did his country and western set with Los Pacaminos.

And our favourite customers, the fabulous and flamboyant Pete and Ange, popped in for a second shopping marathon. 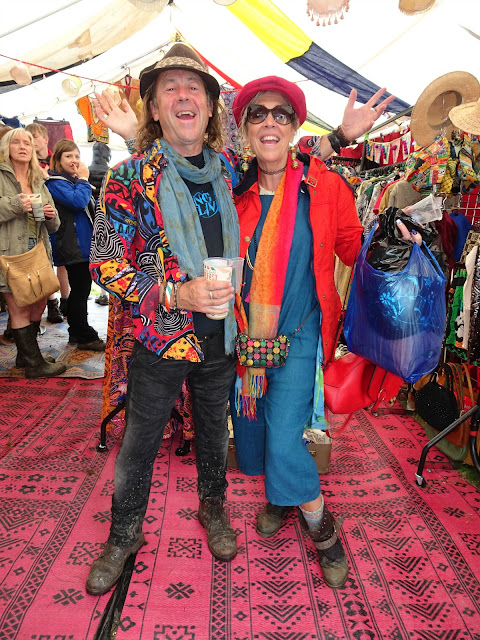 Finally we had a visit from the festival organiser who issued us with what we'd taken up to 5pm on Saturday....in cash....somewhat bizarre considering the festival was supposedly cashless! Having a wedge of cash made us both paranoid about being robbed, not helped by the fact that the organisers had scrimped on security fencing and the general public insisted on using our stall as a cut through. The organiser told us that we'd get an email on Monday confirming the monies outstanding* and the cash would be transferred into our account by Wednesday**.

*It's now Tuesday and they've emailed to ask for our account details.
**No money as at 10.30pm on Wednesday night...

We watched the superb James from the comfort of our stall before rolling down the shop front for the final time, packing up the stock and finally collapsing into bed. Thank you and goodnight, Lakefest 2019!

However, that wasn't the end of our wild weekend!

Less than an hour later we were awoken by someone banging their fists on the van - at first we thought it was drunken revelers and ignored them but when it continued Jon got up to investigate and it turned out to be the security staff insisting we vacate the area immediately and assemble over in the arena as there was a major health and safety incident. Off we trudged in our nightclothes, ankle deep in mud and clutching on to our cash for dear life where we sat with our fellow traders, lost souls and cider casualties as an emergency rescue team battled to right an articulated truck that had skidded off the main road, fallen on its side and was in imminent danger of rolling down the mud-covered hill and crashing into the trader area.

Gale force winds, torrential rain, thunder, hail and emergency evacuations......not to mention the first time we've ever had stuff nicked from our stall in all our years of festival trading, thank goodness we've got this weekend off, that's all I can say!