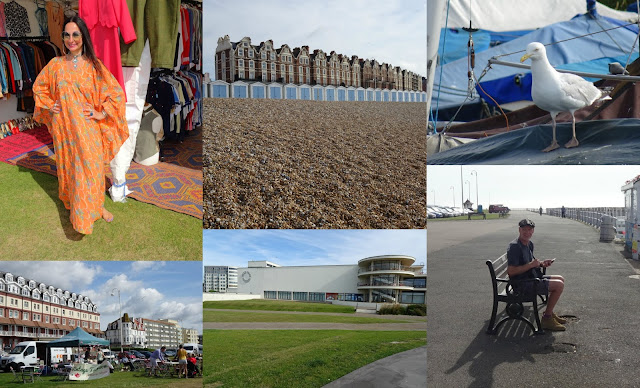 This weekend took us to Bexhill-on-Sea where we were trading at a pop-up vintage fair on the seafront as part of the town's annual Great Gatsby weekend. Friday's journey down south, which should have taken three-and-a-half-hours, ended up taking six-and-a-half as it seemed like the entire population of the UK had also decided to drive down to the coast. Our scheduled setting-up time was between 4 and 6pm and we managed to pull up to Bexhill's seafront with minutes to spare. Fortunately our pitch fee included an already erected trade tent so all we had to do was unpack the van and sort out our rails before darkness descended. Our fellow traders had booked into local hotels but us, being us, had opted to sleep in the back of the van. As the only campers, organisers Maxine & Elliot handed over the key to the portaloo to Jon, introduced us to the overnight security guard and bade us farewell. 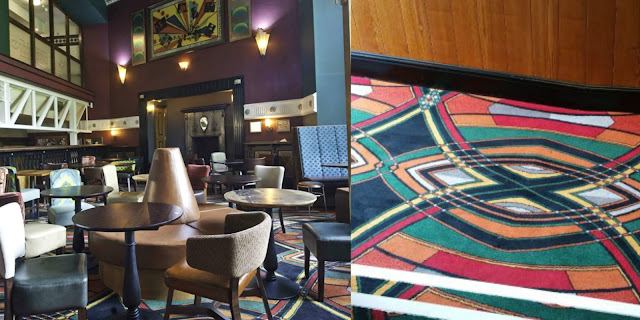 Set-up complete we headed off to Bexhill-on-Sea's branch of Wetherspoons, The Picture Playhouse, a splendid former Art Deco cinema built in 1921 and boasting possibly the best carpet we've ever seen in a 'Spoons. The weather was inclement to say the least and by the time we'd reached our destination it looked like someone had chucked a bucket of water over the pair of us, although after a few pints we'd stopped caring. We walked back to the van, ate cheese and crackers in bed and fell asleep listening to the torrential rain hammering on the van roof.

By 5am the rain finally stopped and I was able to dash down the promenade in my nightie to use our exclusive toilet facilities (apologies to any Bexhill residents I may have scared in the process.)  Upon investigation of our stall we discovered that a couple of bags of stock had borne the brunt of the previous night's rain - including the headscarves and cravats that I'd spent an hour ironing on Thursday afternoon - arghhh! After packing away the offending items, putting a few finishing touches to our shop, a wet wipe wash and a mug of tea it was 10am and our pop-up vintage shop opened to the public.

Trade was brisk and the crowd were friendly but don't be deceived by our appearance in this photo,  the sea breeze was a killer, my hair resembled a raggedy tangled nest and my eyes watered perpetually. By closing time we traders had been rendered insensible by eight hours of constant wind. 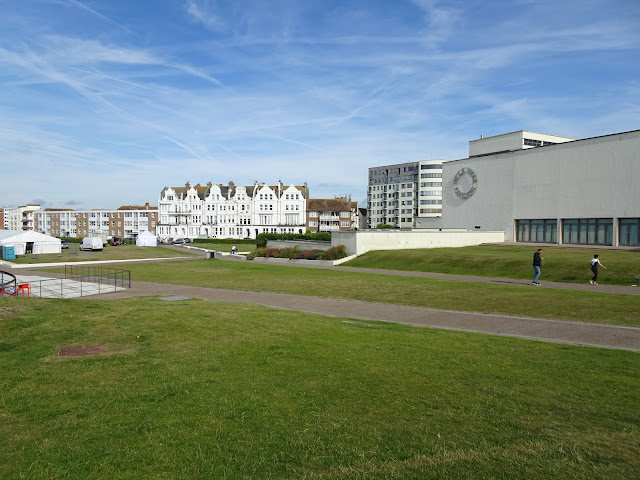 Pop-Up Vintage had secured the traders free admission to the evening entertainment in the marquee situated in the grounds of the outstandingly gorgeous De La Warr Pavilion, a grade I listed seafront masterpiece built in 1935 and one of Britain's first modernist buildings and, after a delicious Indian meal at Mowgli (HERE), we headed off to the swing dance event. Neither Jon or I are into dancing but we had a beer and people watched for an hour or so before heading back to the van. 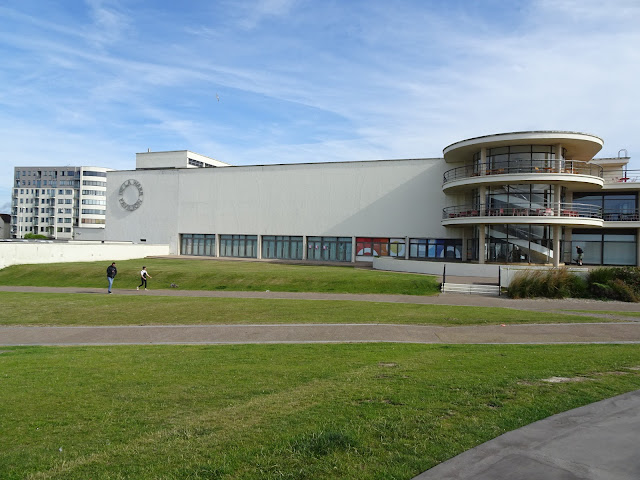 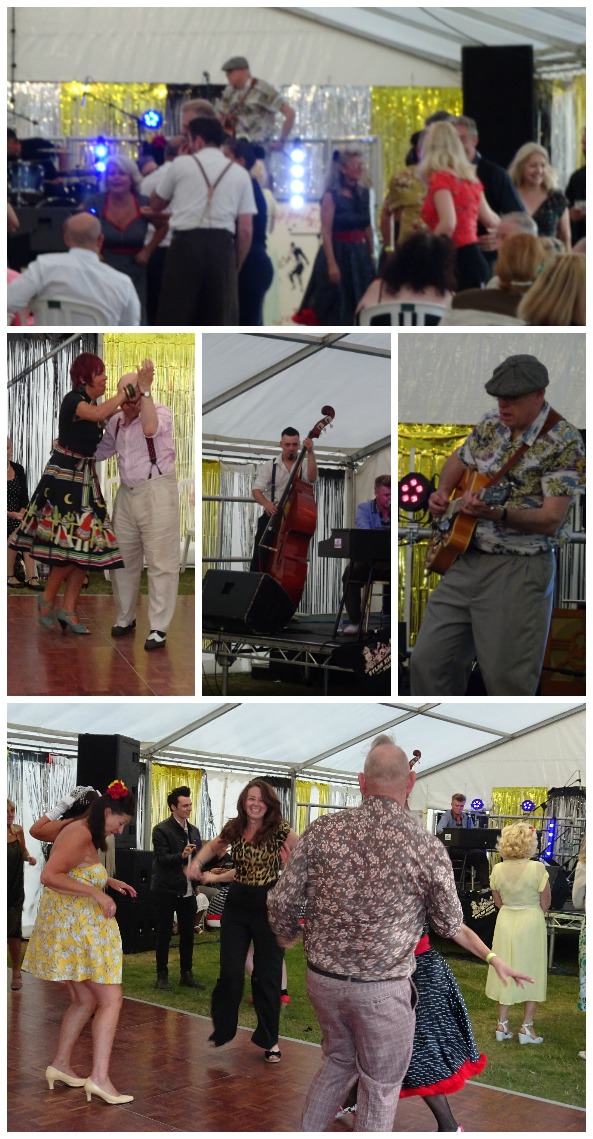 On Sunday we opened at 9am and were thrilled to note that the wind had dropped a little - although you can probably tell from my hair that it was still pretty breezy.


I was excited to meet beautiful blogging pal, Betty, for the first time and we sat and chatted in the sunshine like we'd known each other for years. After bidding one another goodbye, I got back to work, chatting to visitors and making sales until closing time rolled (or blew) in at 6pm. 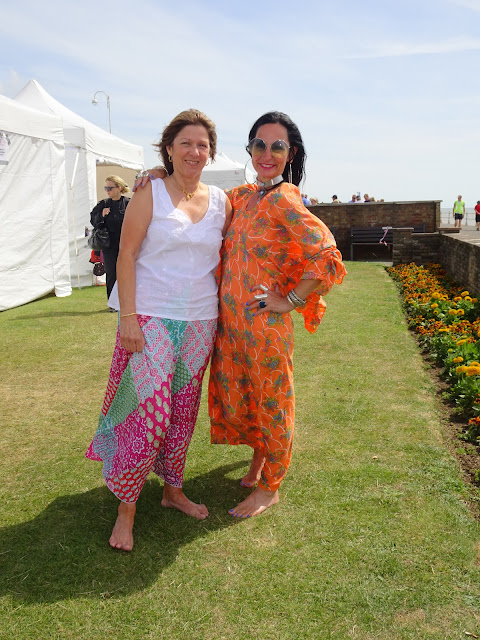 After we'd packed up the stock, loaded the van and bade goodbye to our fellow traders Jon tearfully handed the portaloo key back to Maxine - being the loo key holder meant we'd got to know our fellow traders really well as they'd all had to speak to us if they needed to pay a visit. We'd decided to treat ourselves to a night in a local bed and breakfast so we could explore the town's legendary chazzas the following morning. On arrival to our chosen accommodation we were thrilled to be told by Tony, the owner, that he'd upgraded us to a studio apartment - absolute luxury after two nights in a van! After a quick shower we headed back to 'Spoons (where else?) for a bite to eat and the obligatory pint or two. Well and truly knackered we were fast asleep in our wonderfully comfy cloud-like bed by 10.30 pm. 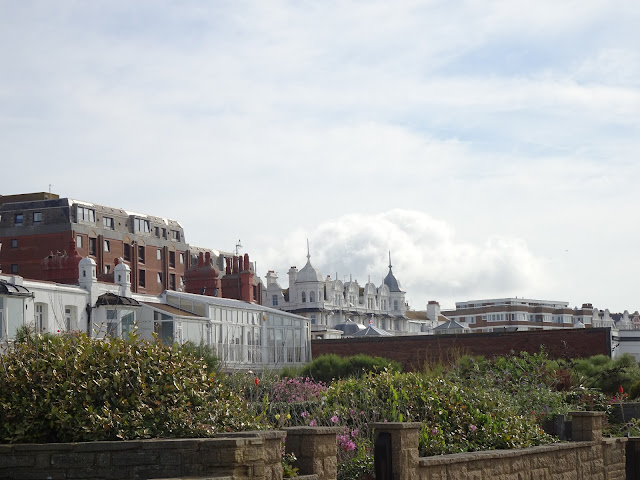 The following morning after a slap-up vegetarian cooked breakfast at our B&B we had a stroll along Bexhill's wonderfully tranquil beach - a world away from neighbouring Brighton. 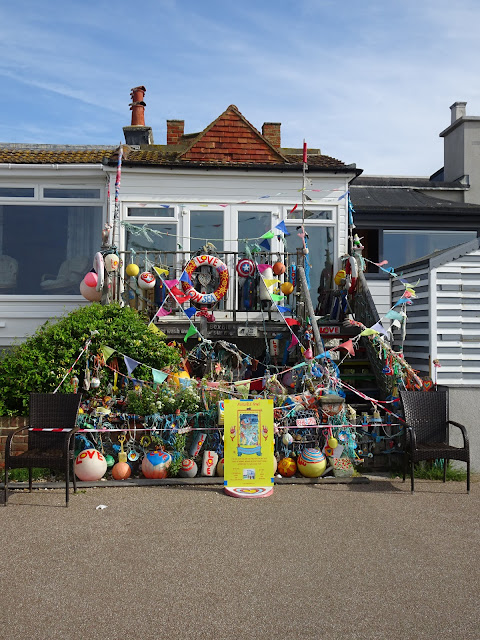 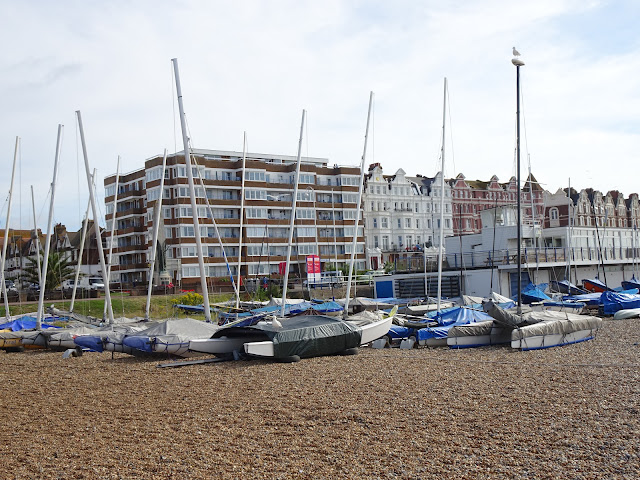 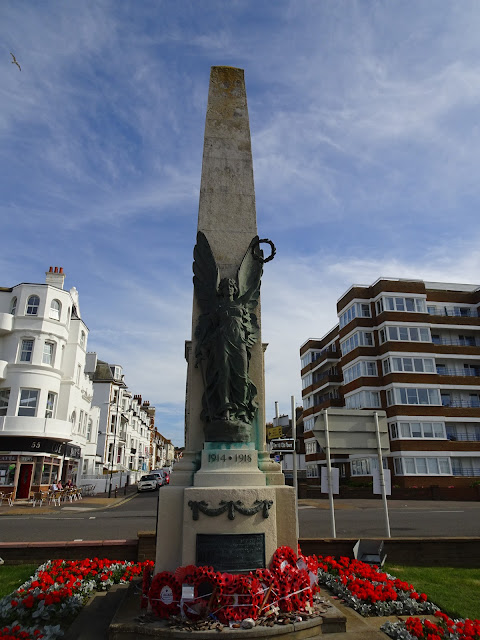 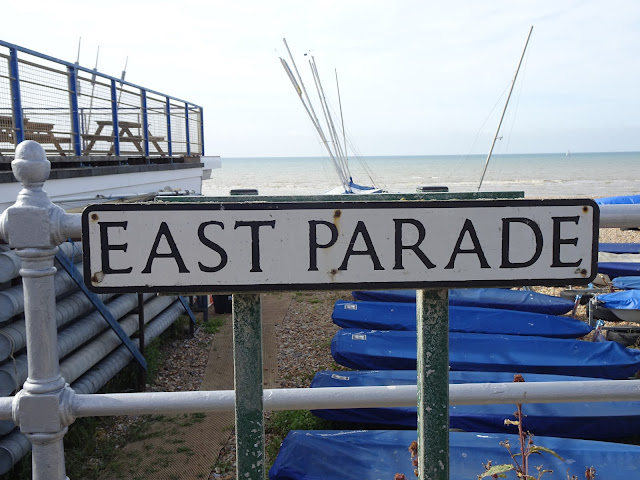 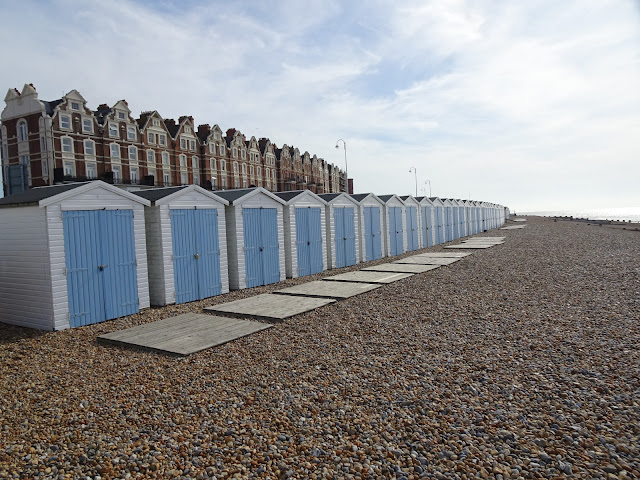 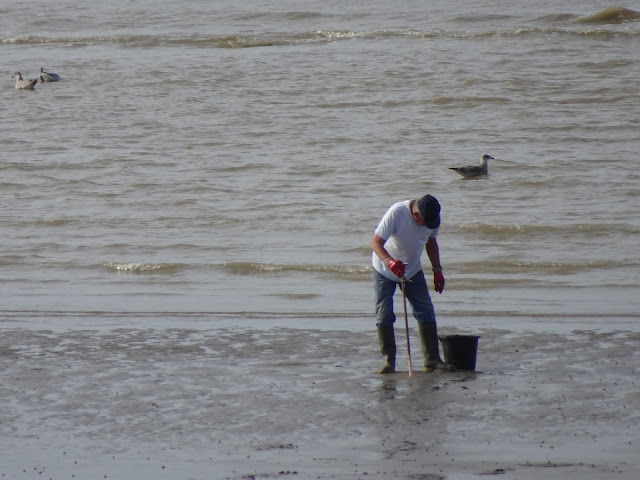 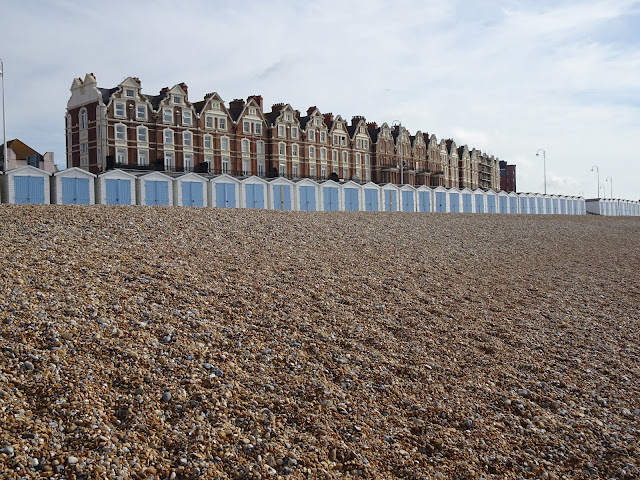 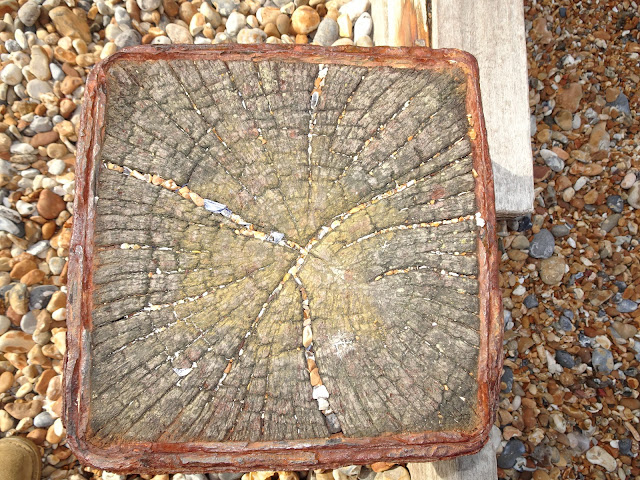 And what of the legendary charity shops? Considering the amount of people who retire to Bexhill-on-Sea I'd hoped that the chazzas would be packed with cool old stuff but sadly the clothes on offer were of the modern variety with a large amount being the labels favoured by ladies of a certain age, Per Una and Bon Marche to name just a couple. Still, if there's vintage to be had, Jon and I will find it...and we did!

Our journey back up to the Midlands again took us the best part of six hours and back at home we hit the ground running, doing two loads of washing (our gear, Friday's rain-sodden stock and the morning's chazza shop finds), watering the parched garden and hosing down the van. Today, we're unpacking the van and sorting out the stock in readiness for this weekend's Indietracks festival. 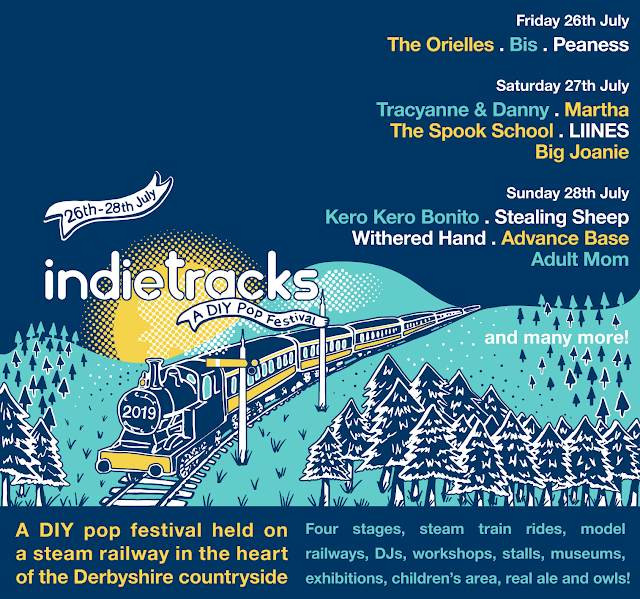 No rest for the wicked!!