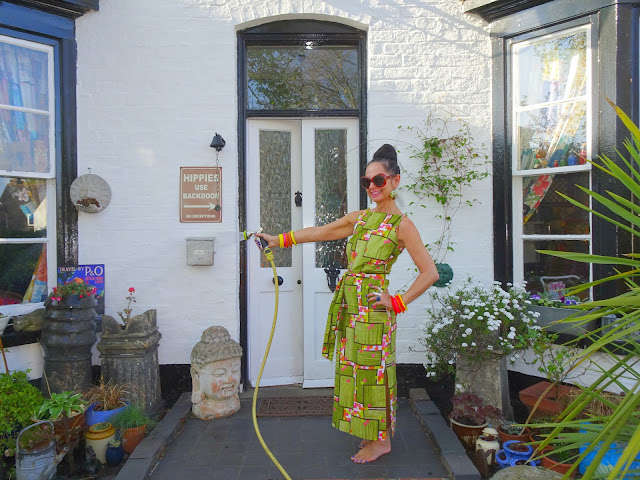 Did somebody mention a holiday weekend? There's been no rest for the wicked at Stonecroft these last few days. With the Easter weather predicted to be hotter than the Spanish Costas, it was the incentive I needed to get our poor neglected garden sorted (although when I say garden, I mean the area directly outside the front of the house as opposed to the remaining 100 metres of wilderness - that's a step too far.) 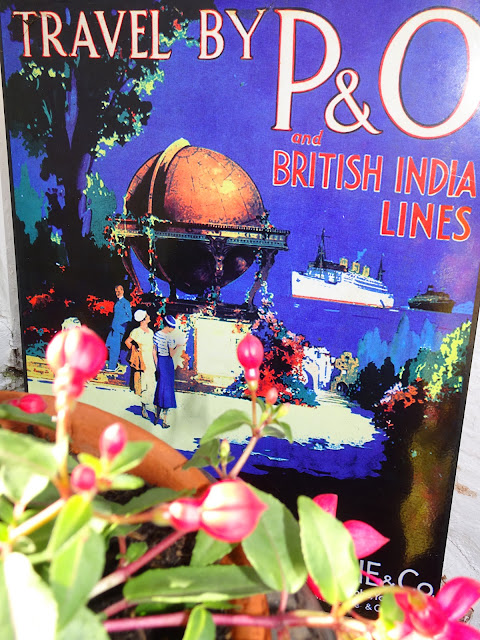 By way of a change we decided to give the DIY Superstore a miss and visit a local garden centre instead. When we'd last visited some twenty years ago it was all rather depressing, all naff garden ornaments and eye-wateringly high prices. Two decades on and its a whole new world, a team of young knowledgeable staff, a wide variety of plants (many grown in the UK) and all at prices significantly cheaper than the big chain we usually visit. We even got an additional discount at the till for no other reason that the boss was in a good mood. 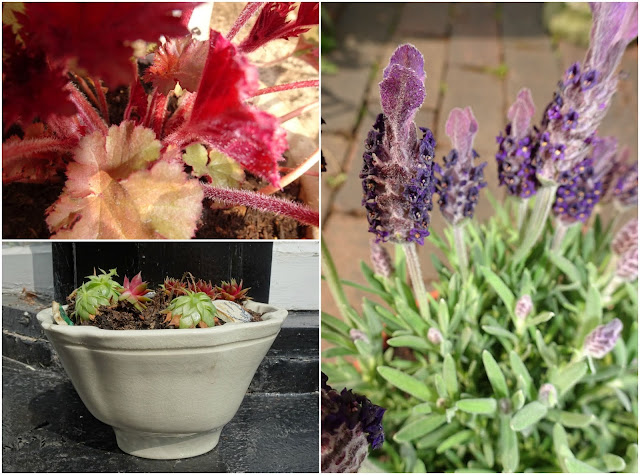 Back at home I rummaged through the outhouses and under the kitchen sink for any suitable containers to serve as planters for my new greenery (and not-so-new but in dire need of re-potting). The succulents that grow like weeds in our borders were transplanted into old enamel teapots, antique earthenware pots, a Victorian jelly mould and even a tiny terracotta pot I'd found washed up on a remote beach in Tamil Nadu shortly after the Boxing Day Tsunami. 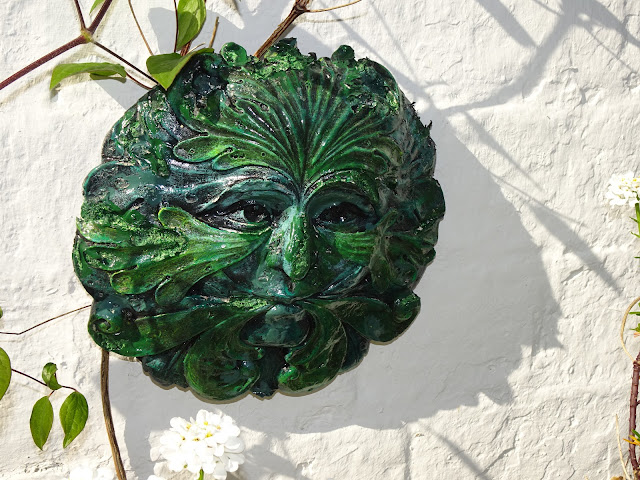 My Green Man wall plaque (bought from a car boot sale about four years ago) was looking a bit shabby so I repainted him with a selection of Barry M Nail Paints. 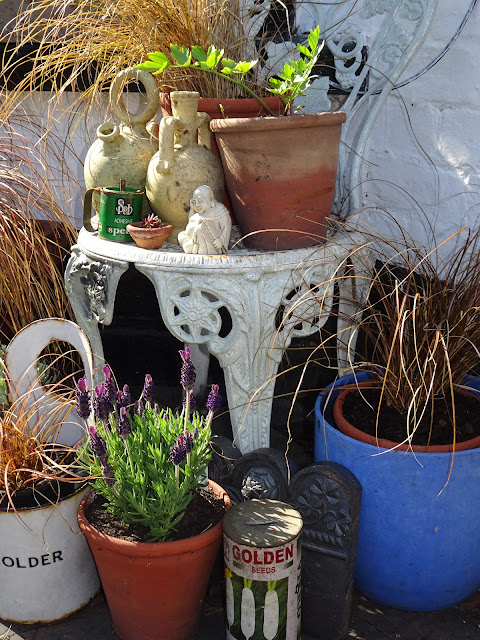 I hauled this cast iron chair from out of a skip over a decade ago. It's too far gone to sit on but far too pretty to get rid of. 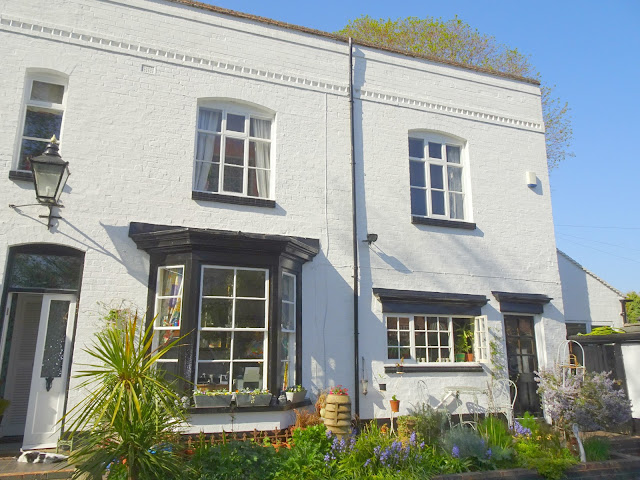 I bought these aluminium window boxes from a half price supermarket clearance sale fifteen years ago. 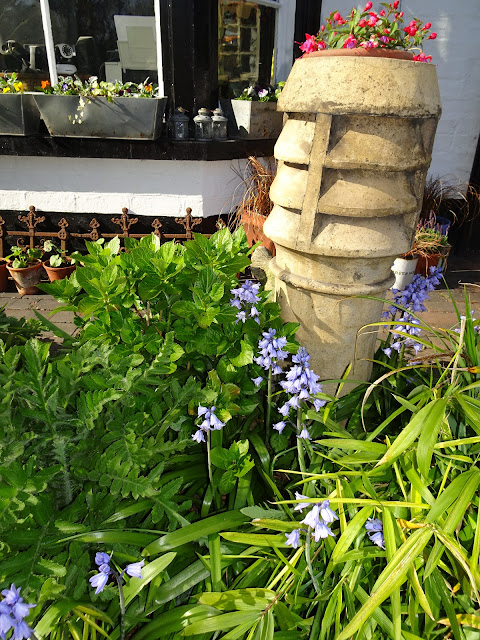 Back in the 1960s when everyone started having central heating installed these chimney pots were chucked in skips. My Grandma, an avid recycler, used to rescue them and use them as planters - a tradition that's passed down to me. We had quite a few nicked when we first moved into Stonecroft - lesson learnt - these days I fill them with builders rubble and old bricks so they ain't so easy to shift. 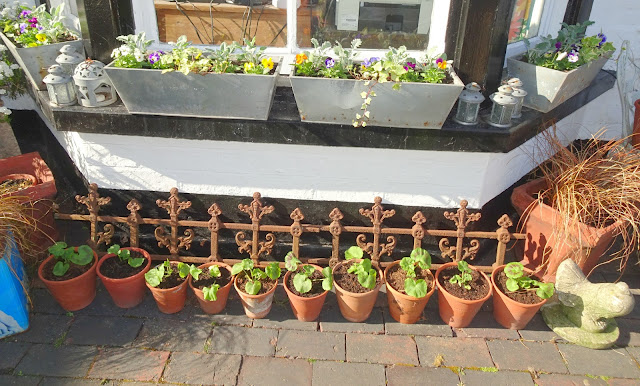 I uncovered these Victorian cast iron railings when I was digging further up the garden. They're quite rare, the majority were removed from houses and melted down to make ammunition during WW2. 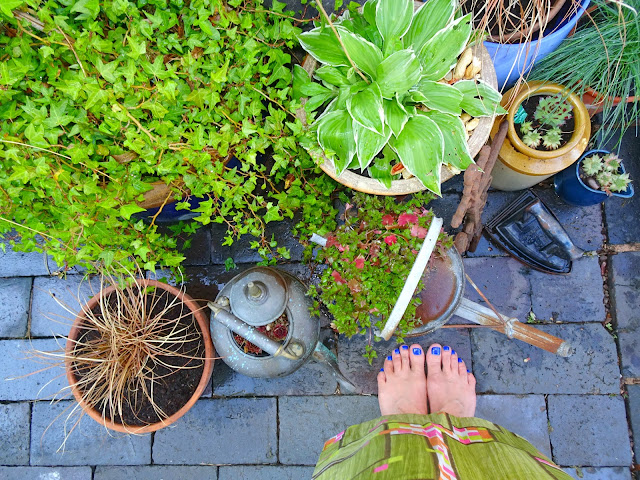 That was my watering can until the bottom dropped out but I didn't throw it away. Beneath my feet are Victorian Staffordshire blue bricks, produced locally and found by Jon on eBay. 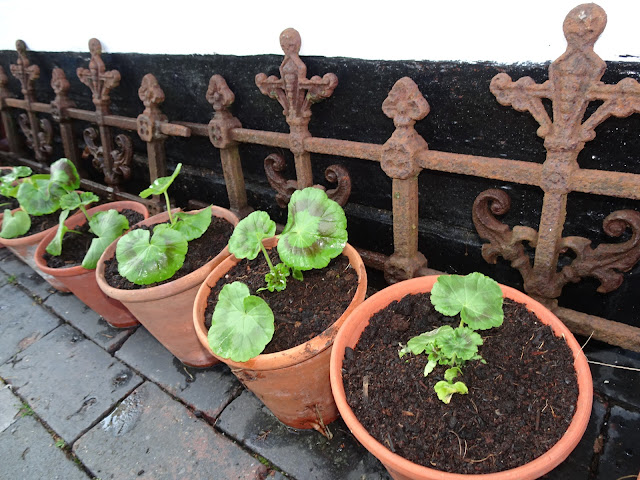 The original owner of The Cottage (my parental home) amassed hundreds of these Edwardian terracotta pots, I'll never have to buy a new plant pot as long as I live. 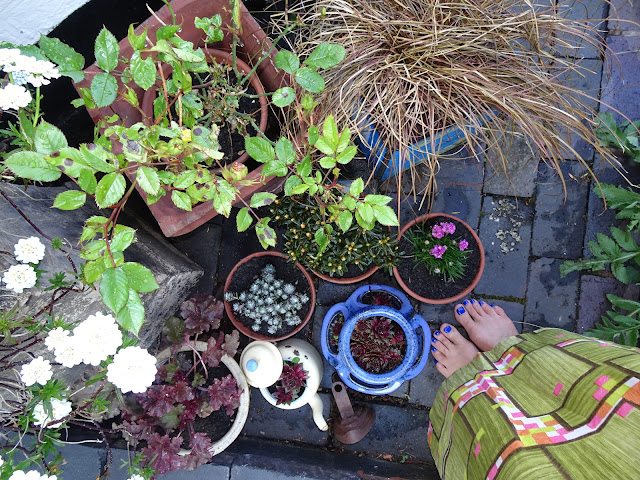 I love how the Greeks use old tin cans for planters. I found this catering sized tin by the bins at the End of The Road festival on the last day. I've keep it outside for a couple of years to give it a bit of rust patina. 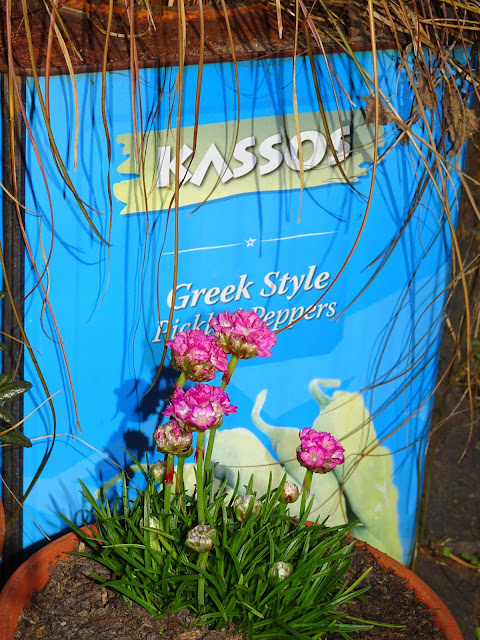 Who needs to drive long distances to see bluebells? Not us! We've got hundreds of them. 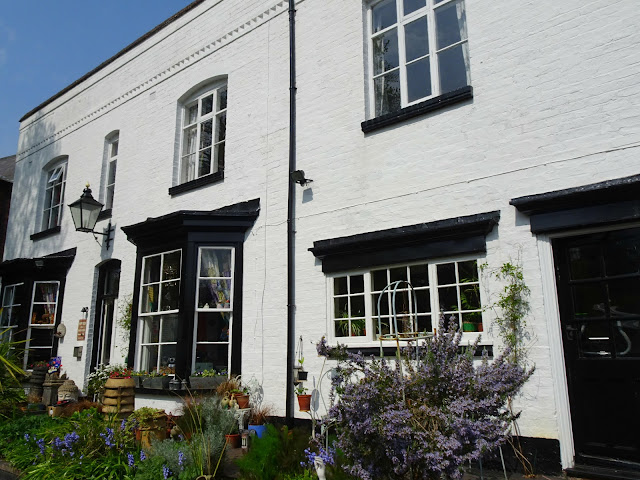 The repro P&O enamel advertising sign ( a charity shop find years ago) hiding a bit of paintwork that needs a touch up. 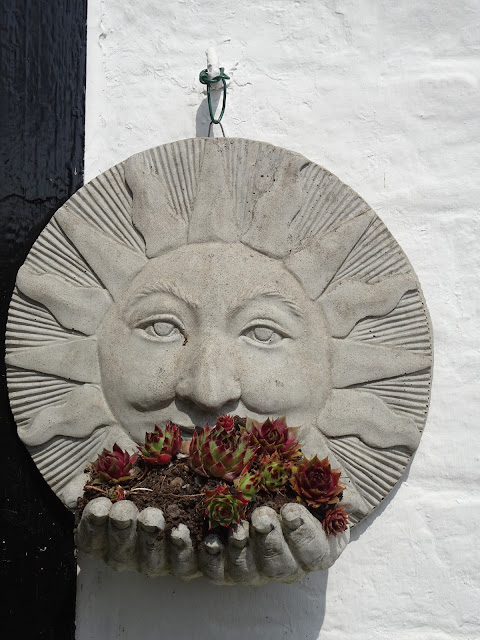 That's better! Now the outside of the house matches our eclectic interior, a mishmash of salvaged, secondhand and bits found on our travels. 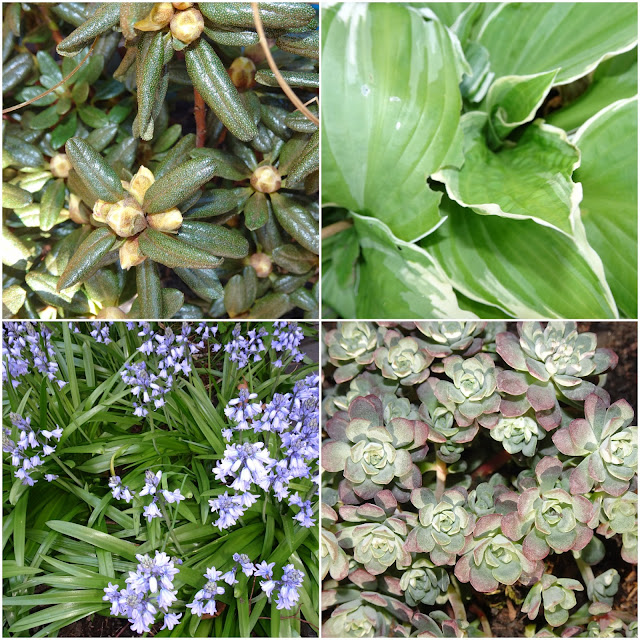 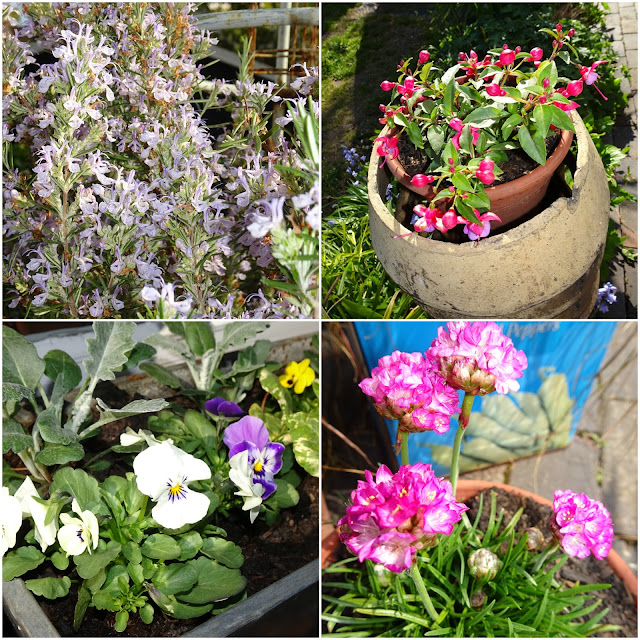 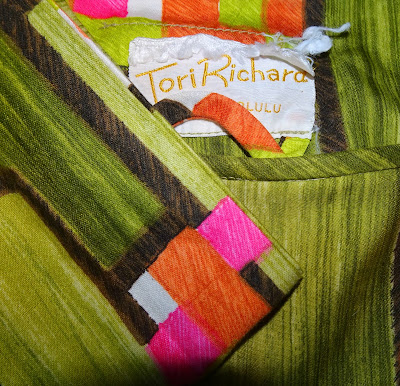 And what am I wearing? An early 1960s cotton column dress by legendary Hawaiian designer, Tori Richard of Honolulu via Moseley Vintage Fair and last worn HERE when Jon & I met Polyester Princess, Ann & Jos on a similarly gloriously sunny day.

Is that all I did this weekend? No! In my infinite wisdom I decided that newly painted Gilbert needed a new set of curtains, tie-backs and a cushion so I've spent a large part of the hottest weekend this year on attached to my sewing machine. I think a large glass of something alcoholic is called for.

Linking to Patti & the gang for Visible Monday.
Posted by Vix at Monday, April 22, 2019

Email ThisBlogThis!Share to TwitterShare to FacebookShare to Pinterest
Labels: Gardening, Our House