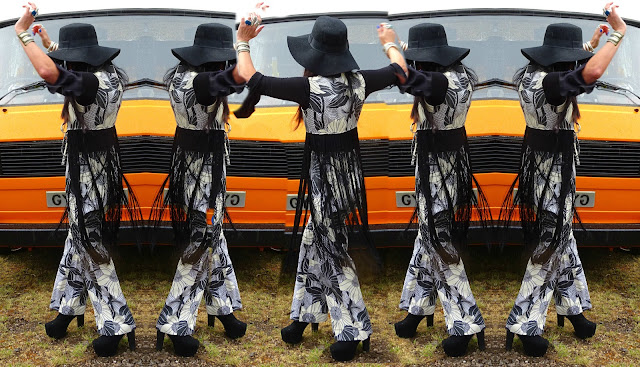 Whenever I wear this insane vintage Shubette of London fringed Go-Go suit I can't help but dance. I reckon it used to belong to Cher, or at least a Walsall woman who was just as cool as she was back in the 1960s.

For something that makes me feel so good I'm ashamed to say that I haven't worn it in ages. I bought it eight years ago fully intending to wear it to the Glastonbury Festival but as 2010 was the hottest Glasto on record it was gauzy maxis all the way. I've worn it to work at numerous vintage fairs but in recent years it had started to get a bit snug around the waist - that's until I said no to stuffing my face with rubbish and now it fits me better than ever. Junk food or go-go suits? No competition! 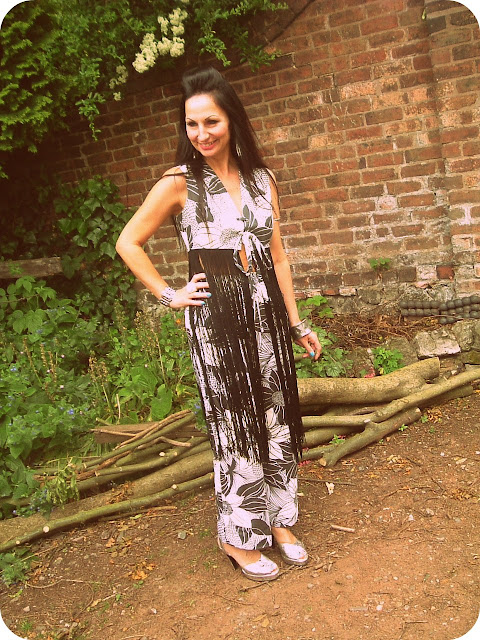 Here it is on the blog back in June, 2011. I was amazed to see a seller selling exactly the same suit on his stall at Moseley on Sunday. His asking price was £80, almost eight times what I paid for mine! As I often tell people, vintage clothes are an investment - buy new and the value depreciates on the first outing, buy vintage at the right price and you'll often get your money back (and more!) if you ever decide to sell. No chance of wearing nothing underneath today, last week's heatwave is but a dim and distant memory, it's back to sunshine, showers, hail and more showers - a sure sign we're trading outside at the Classic Car Boot Sale in London this weekend. (Check out their photo gallery from last year, you might spot me as well as a few celebs!) 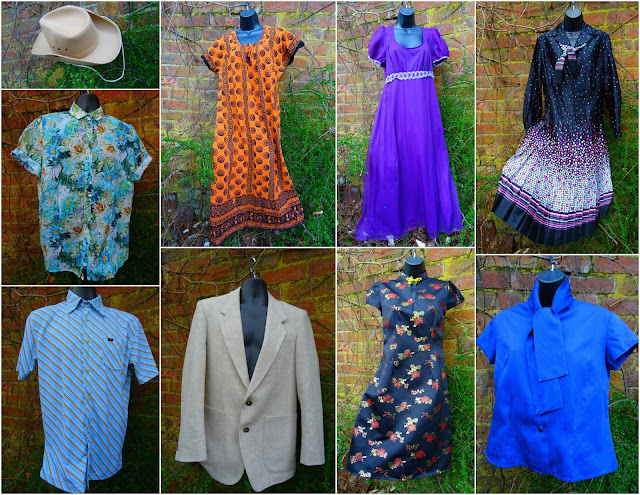 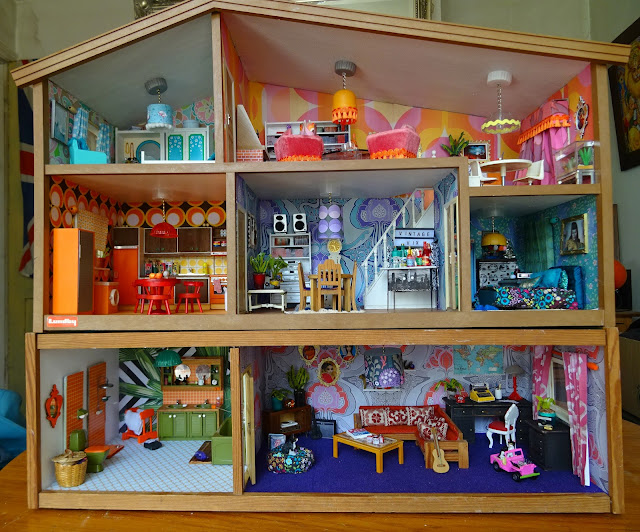 And what of the doll's house? I've just got to add lights and I'm done and, as I'm wearing a wild print here's the final room to show you, the bathroom with its crazy jungle wall. 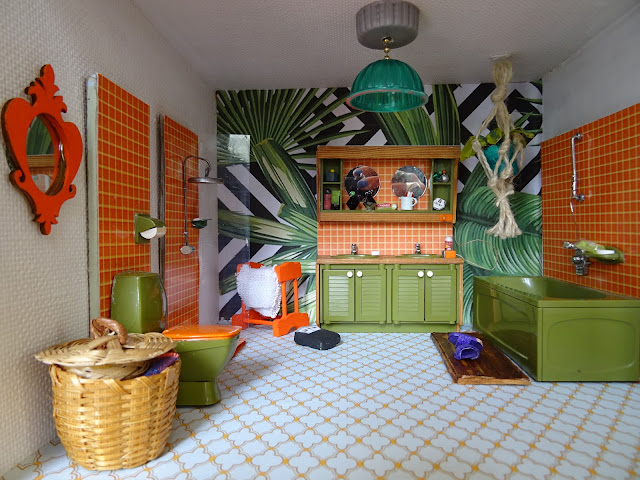 I was so excited to win my avocado bathroom suite on Ebay that I shared it on the blog a couple of weeks ago.


As I mentioned before, the seller had given the suite a shabby chic makeover which just wasn't me (or my doll's house) so I replaced backing with a bright orange mosaic tile instead. I found the Moroccan tile-effect floor paper for 36p a sheet in the clearance section of a doll's house website. The laundry basket was also on clearance and was £1.45 but as it was a modern piece I had to trim it down to size as vintage doll's houses are 16:1 whereas modern ones are 12:1 (something I didn't know until recently). 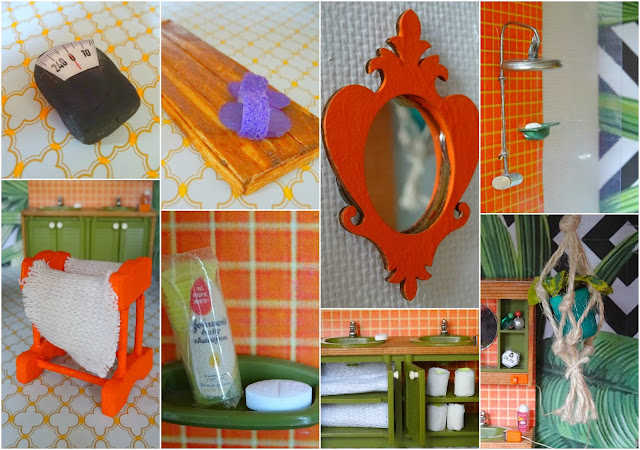 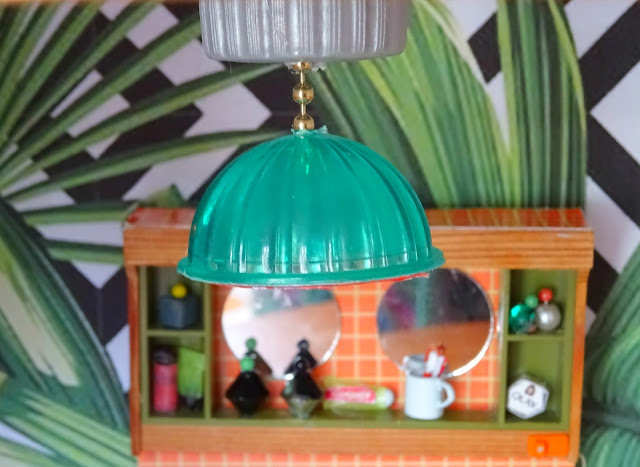 The pendant light fitting is half a cat toy. 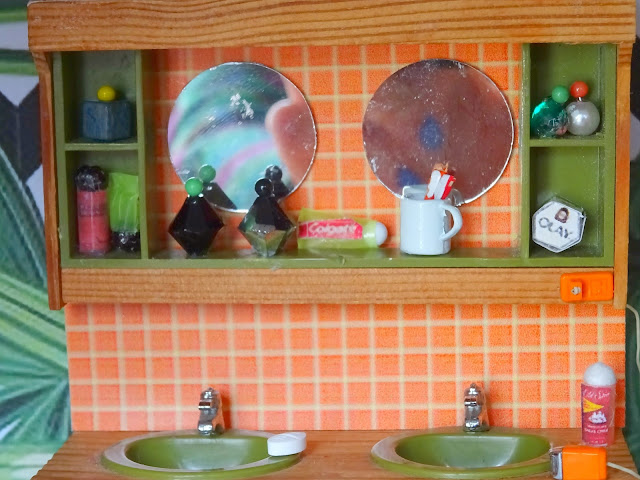 That orange electric shaver is still the cutest doll's house thing I've ever seen, I had to make a can of Old Spice shaving foam to go with it . All the other mini toiletries were me-made, too. 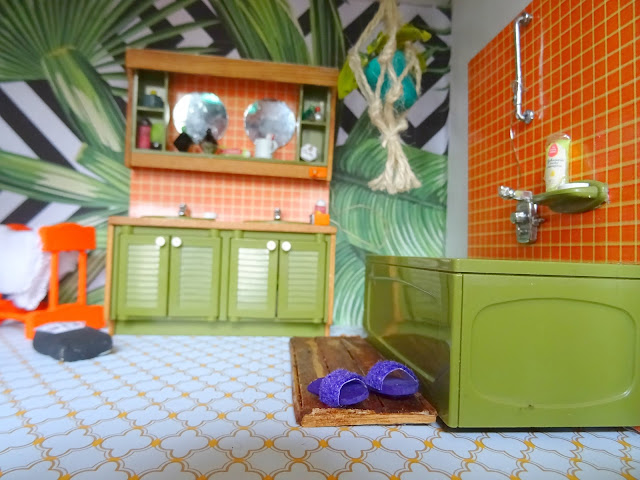 I am kind of matching, in addition to my wild go-go suit I'm wearing bright orange lipstick, green eye shadow and posing in front of tangerine dream, Gilbert. There's even a spiky leaf plant (Yukka?) peeking out behind me!