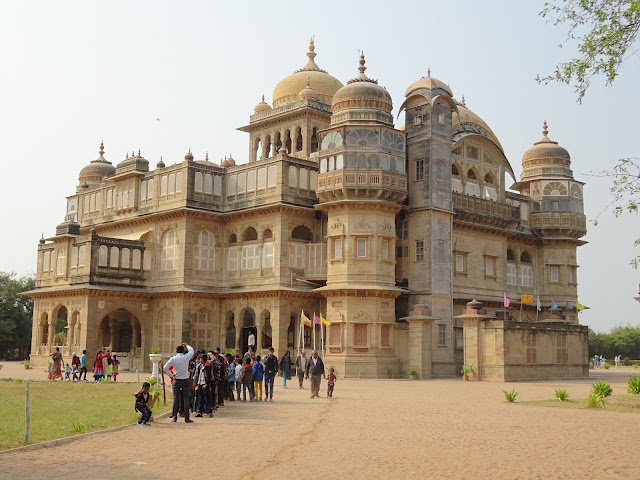 Wednesday was spent with fellow Devpur house guests Carey & Gary, exploring the area around the coastal town of Mandvi. Our first call was the Vijay Vilas Palace, a sandy white-domed building set in seven hundred acres of land, the Maharajah's summer retreat during the 1940s and today mostly used as a film set. Although the Rough Guide described the palace as being little visited I think they meant to add by foreigners. It was bursting at the seams with domestic tourists, school trips and local families all of whom were anxious to get their photo taken with the four of us. 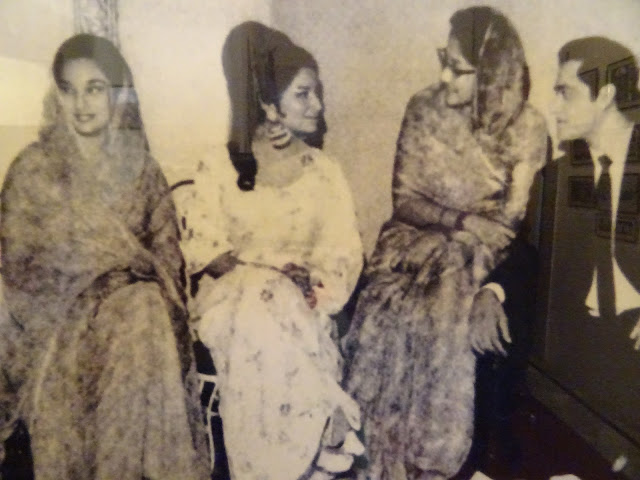 I spotted Bollywood goddess Helen in one of the photos hanging in the hallway, one of a number of family pictures lining the walls alongside the rather macabre hunting trophies. The beautiful woman on the left is the Maharani of Kutch. 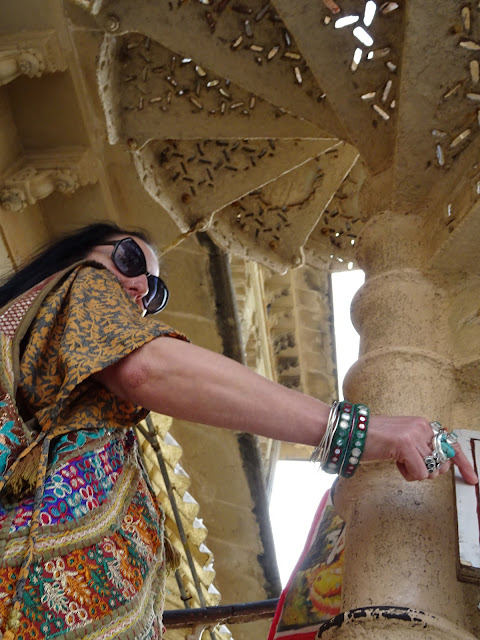 Oops! Those green mirrored bangles inadvertently slipped on my wrist when we visited Dhordo yesterday. 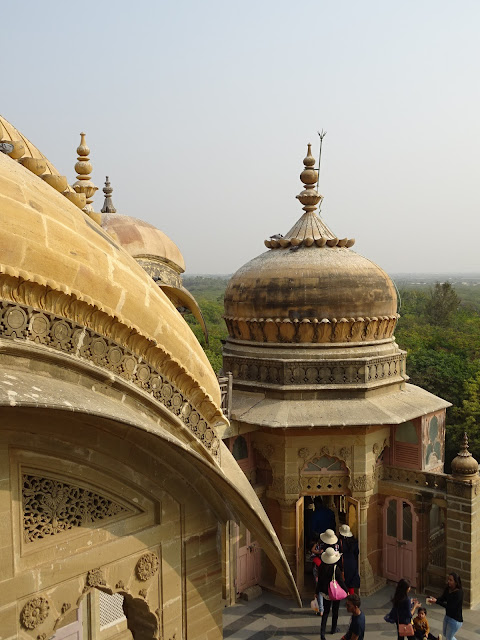 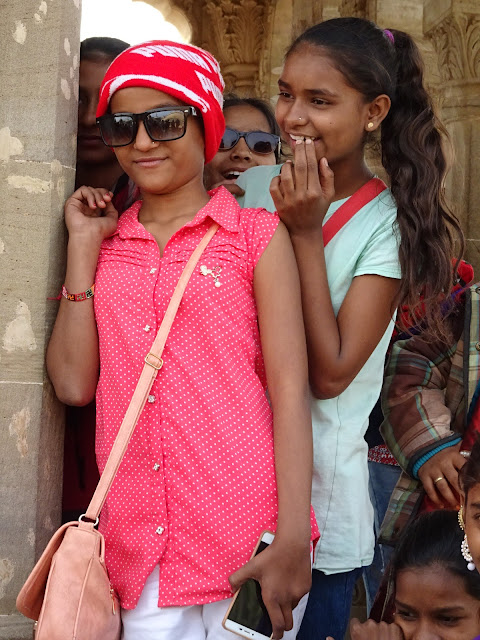 You want a selfie with us? We want a photo of you. Always a good trade off. 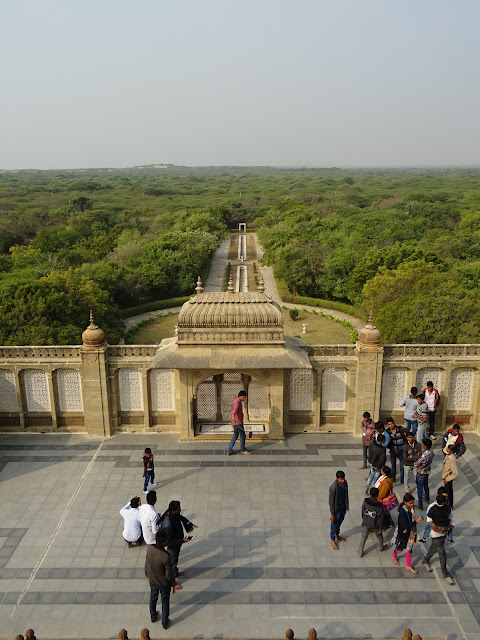 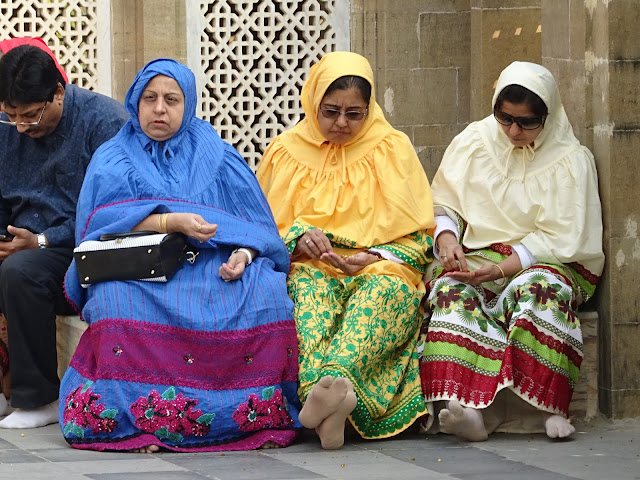 Although the palace has its own private beach, Ramji thought we'd enjoy the public one more. I think he was right, what's exclusive sunbeds & a posh restaurant compared to camel rides, horses in pom poms and 20p snacks? 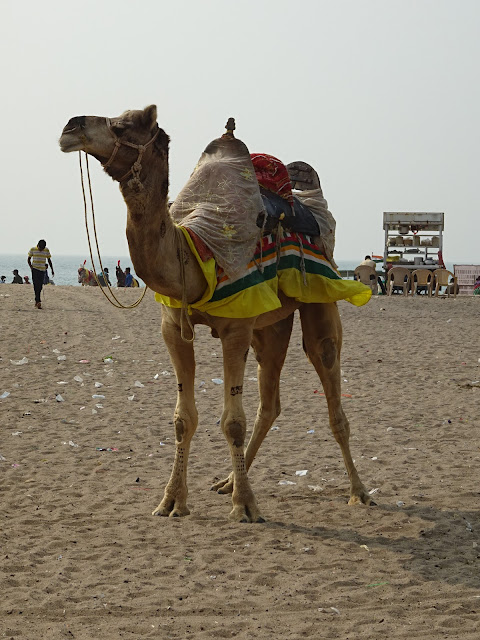 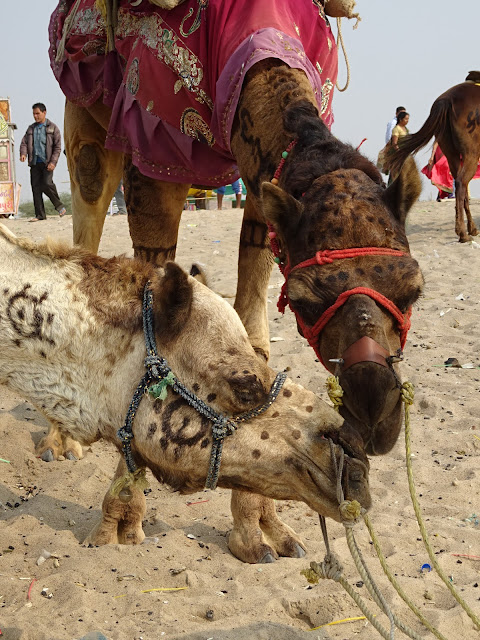 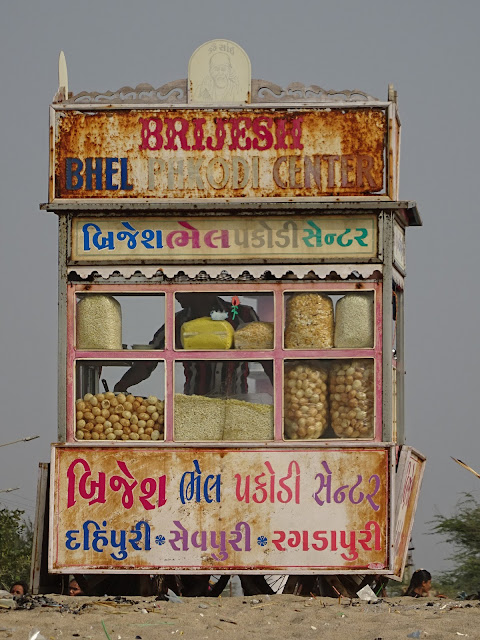 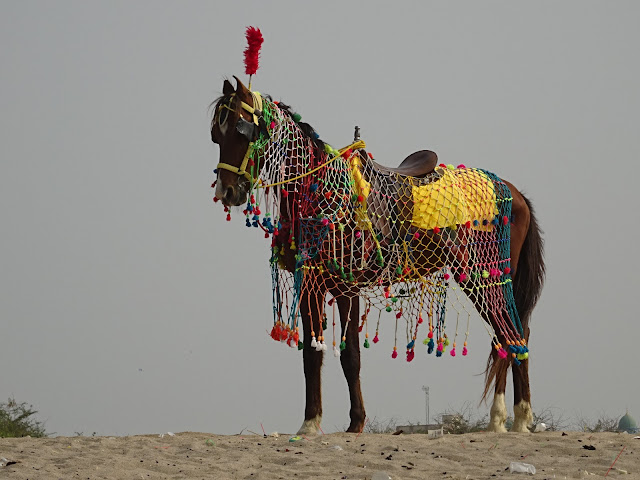 Further up the coast was the estuary, home to the dhow building industry. Each dhow is built entirely by hand, taking around 50 men up to two years to complete. Most of the dhows end up in the Middle East where they're bought by Arab merchants and still used to transport goods. They sell for upwards of half a million pounds. 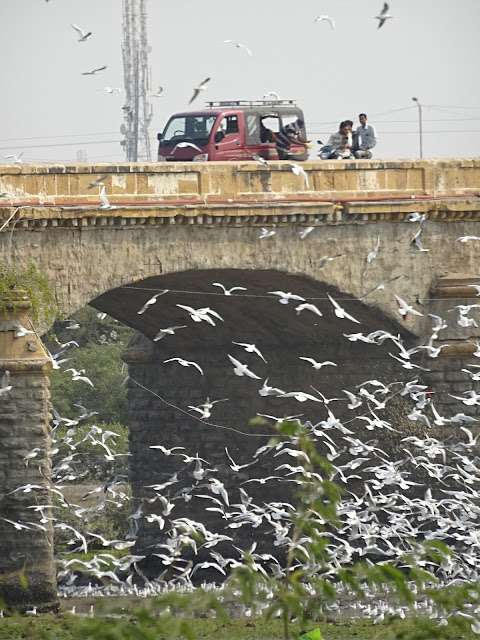 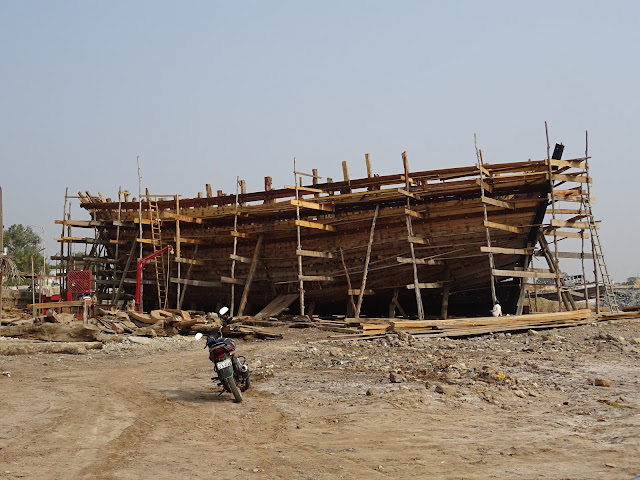 Having a local to drive us around was hugely advantageous. Ramji chatted to the boat builders who kindly allowed us inside one of their partially built boats. 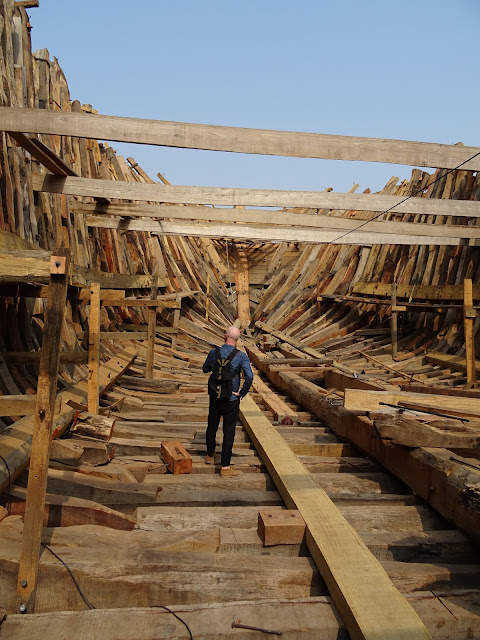 The trees these planks of wood came from must have been bastard massive!

Look what else we discovered in Mandvi estuary..... 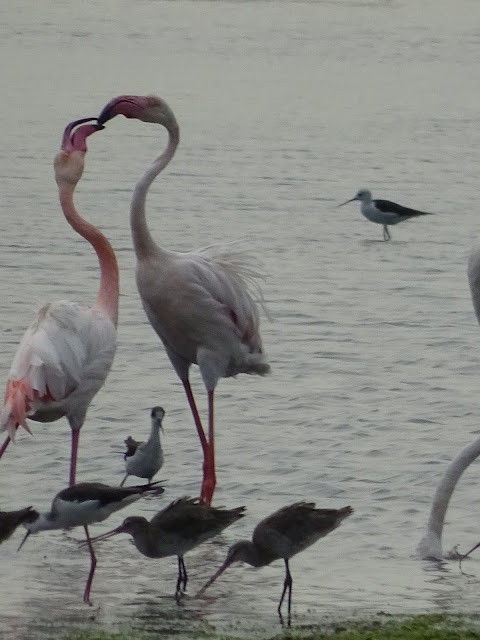 Flamingos! I've never seen them in the wild before. Melanie, I thought of you when we saw them. 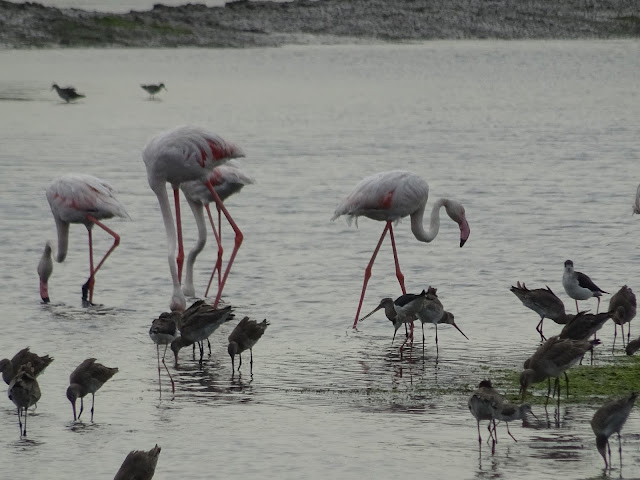 Lunch was yet another delicious veg thali in the best named canteen ever, Zorba the Buddha. From 250 to 125 BC Kutch formed part of the Indo-Greek empire and Kutchis are very proud of their Greek heritage. Greek mythology forms part of the school curriculum at the White Eagles School back at Devpur. 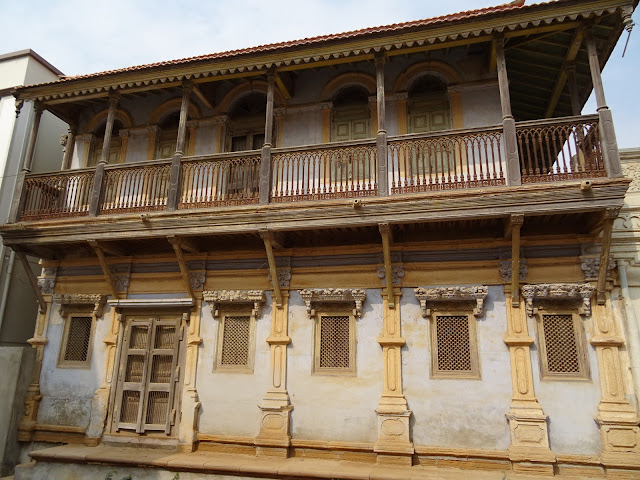 We had planned to visit the home of a man who built model ships but he was out of town so Ramji suggested a trip to see some old houses instead. 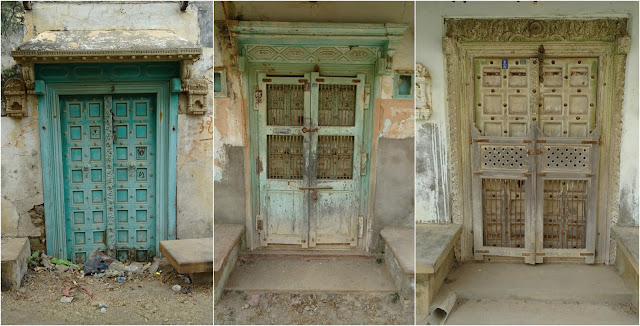 I can't find any reference to this virtually abandoned village on any of our maps or travel guides so I don't know what the place is called. All I can tell you is that during the late 19th Century it was a prosperous area, home to many wealthy Jain merchants. Over the years they either moved away or died and, due to the size of many Indian families and the country's complicated inheritance laws, the homes were locked up and are now rarely visited. Most are still furnished, packed with their previous owners' precious belongings. Oh, how we wished we could have looked inside. 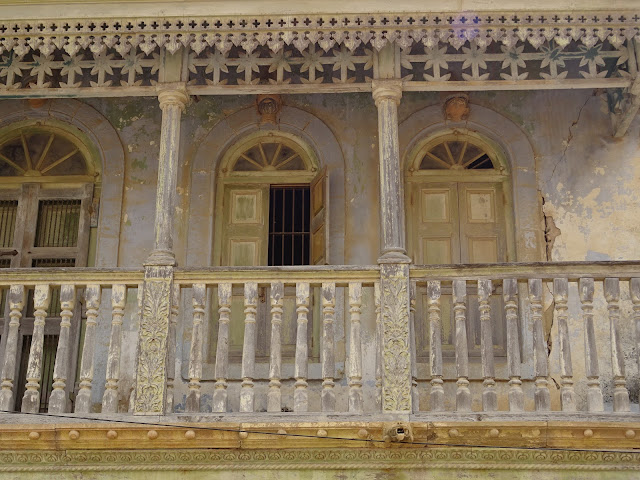 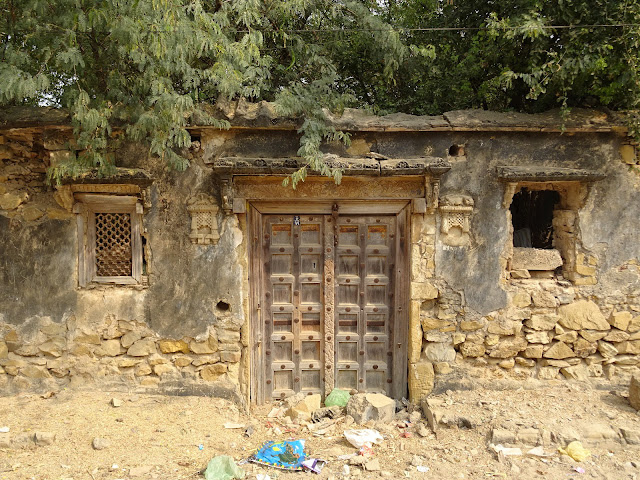 Virtually abandoned it might have been but I still managed to find people to chat to. This is Saiya, proud mother of seven daughters including Yasmin & Prini. They told me that they liked having no boys in the family, girls are better. As you can see, not all Indian women are tiny, these beautiful women towered over me. 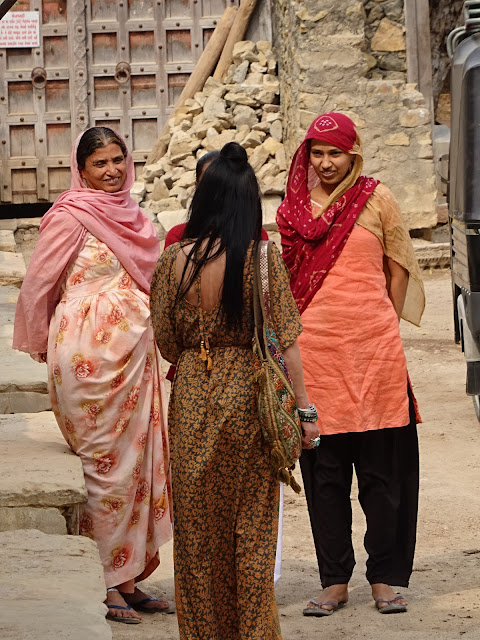 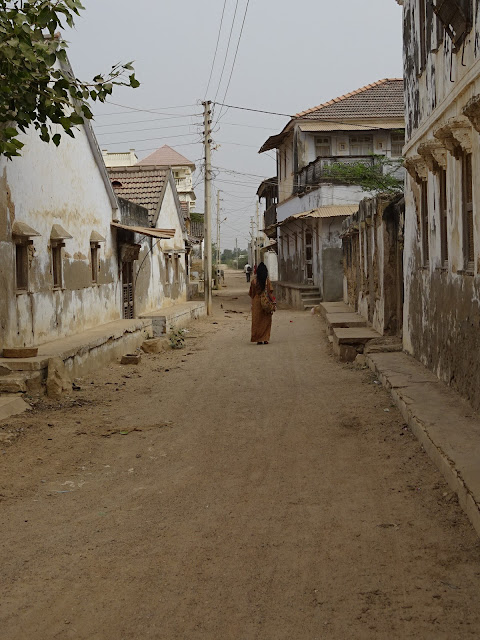 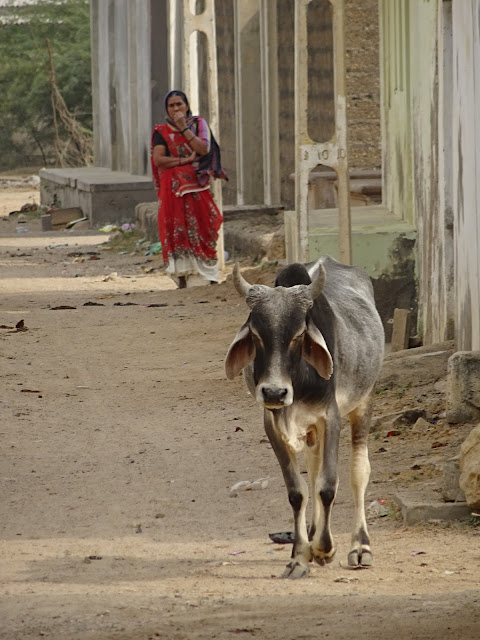 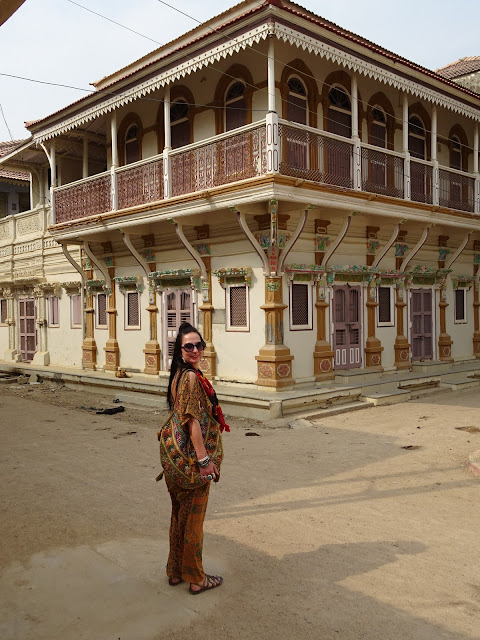 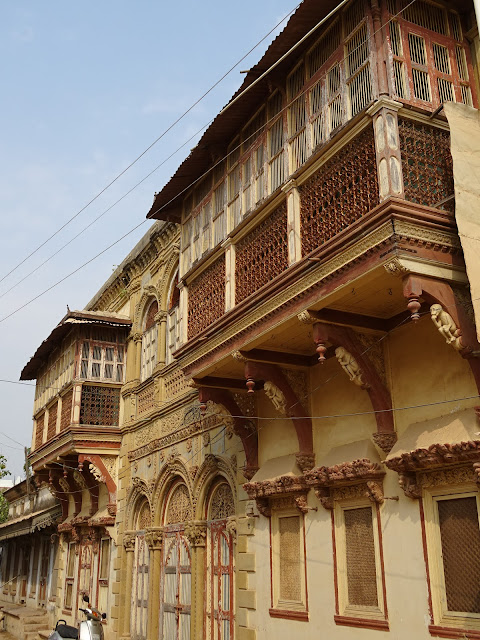 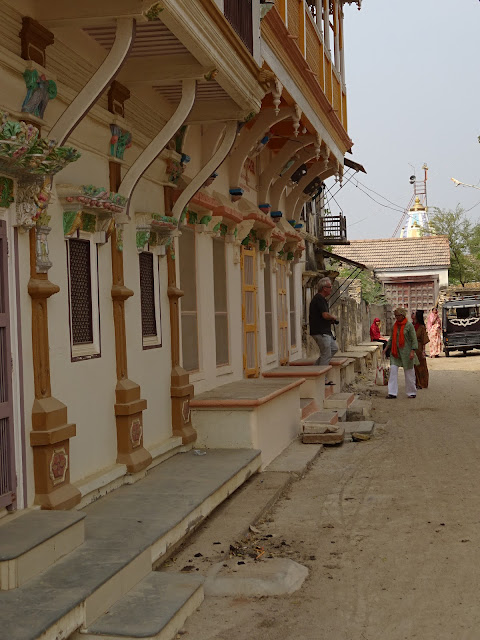 And from old houses to new rooms. Back at the Devpur it was all change, Carey and Gary moved into the Room of 17 Pillars and we moved into Susan's old room, a beautifully bright space with quirky cupboards, Hindu artwork, antique furniture and, like the rest of the house, an amazing selection of Indian-themed literature and glossy travel magazines.

After another sociable and delicious dinner, spent exchanging travel tips with a couple of new arrivals, a couple of women from Delhi who, like Gary & Carey, were filmmakers. Yet again we were in bed by 10pm - our next adventure required a 7am pick-up.

Find all of our Mandvi photos HERE.
Posted by Vix at Sunday, February 18, 2018