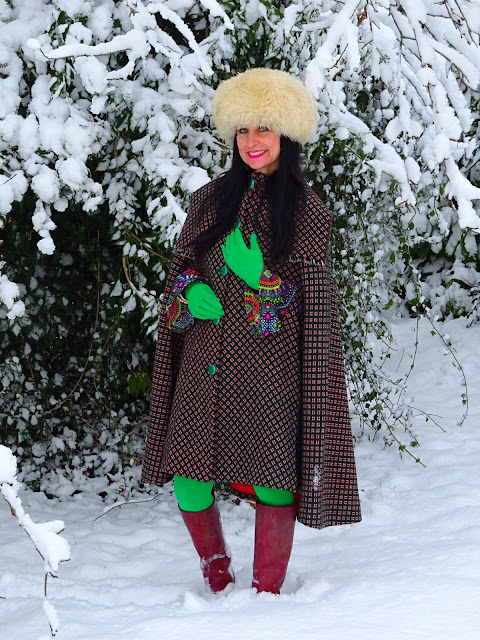 The discovery of this Welsh wool cape in a charity shop on Friday couldn't have come at a better time. The temperatures were icy, we'd already had a few inches of snow overnight and weather warnings had been issued for the mother of all snowstorms, expected to hit the West Midlands early on Sunday morning. 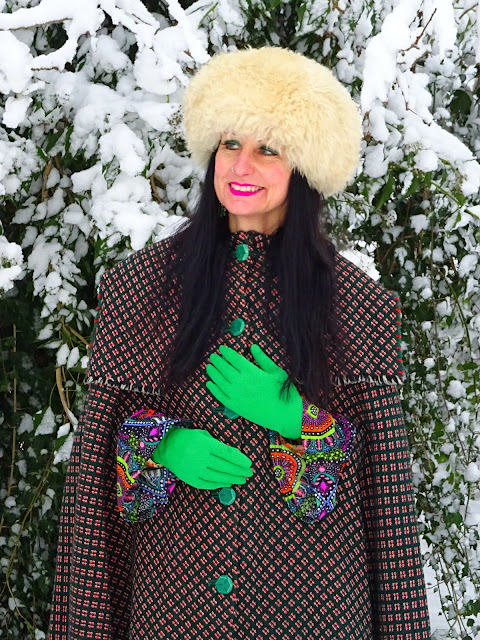 It had been over a fortnight since we'd dedicated a whole morning to charity shopping so, as you can imagine, I was itching to get rummaging. Our first stop was the overpriced and quite frankly, pretty rubbish chazza where we hardly ever find anything and, guess what? I found something. My cape! It was labelled at an insanely low £8 (I've seen Primarni shoes with trashed down heels in there for more). I'm pretty sure it's been hand-made as there's no labels inside. I loved that the person who sewed it opted to line it in red satin and chose big, bold and in-your-face emerald green buttons as opposed to playing it safe with boring neutrals. My kind of dressmaker!


For once, the weather people got it right. The snow started in the early hours of Sunday morning and continued all day. By 6pm we'd had over 20cms and, despite being told that it would stop today, there's been more snow this morning.


After a day spent indoors yesterday, this morning we layered up, swept the step, broke up the ice in the bird bath & replenished it with fresh water and topped up all the bird feeders. After looking a bit forlorn yesterday, our feathered friends are having a right old party now. 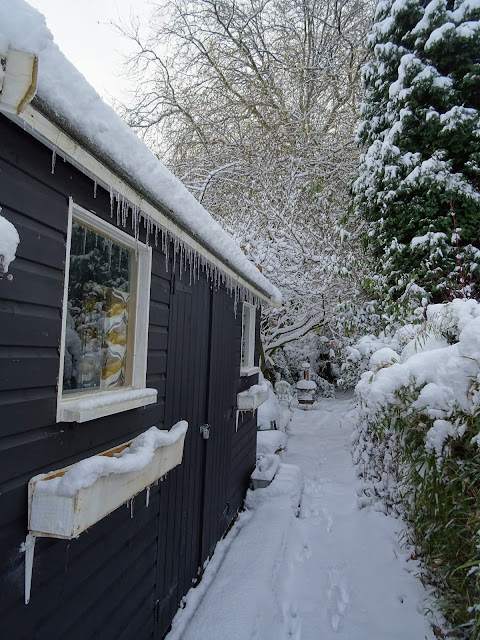 I'm not a practical dresser, I've never owned a fleece, a quilted jacket or a waterproof pair of trousers and even my (vintage) wellies have got high heels. The snow's pretty but it doesn't half play havoc with my wardrobe. Maxis are pretty much useless when the snow reaches past your knees so it looks like minis will be featuring strongly in my outfit choices for the rest of the week. Fortunately for me, the amount of shorter clobber in my wardrobe increased slightly when I snaffled this repro '70s patchwork number from the charity clearance shop within minutes of finding my cape.

I wasn't sure if the skirt looked a bit cheap so I asked Jon. It is cheap, he said, It's £1 and told me to get it 'cos the colours were amazing. He wasn't wrong. I was so preoccupied with the weird feel of the fake suede that I hadn't really noticed the colour. It wasn't until after I'd posted this photo on Instagram and a friend had commented, No chance of getting mown down by a snow plough in that outfit, Vix, until I realised just how bright it was.

Here's almost everything we found - there were a few bits of menswear but they're still drying. I'd stick them in the tumble drier but that would involve me having to leave the window open and it's far too cold for that!

The council gritters can only reach the main roads so not a single vehicle has driven past the house this morning, the school around the corner is closed and even public transport has been cancelled. Birmingham airport was shut for most of yesterday and it felt odd not to hear a plane fly overhead. I'm rather enjoying the silence although I expect the novelty will wear off after a couple of days and I'll be pacing the house like a caged tiger. 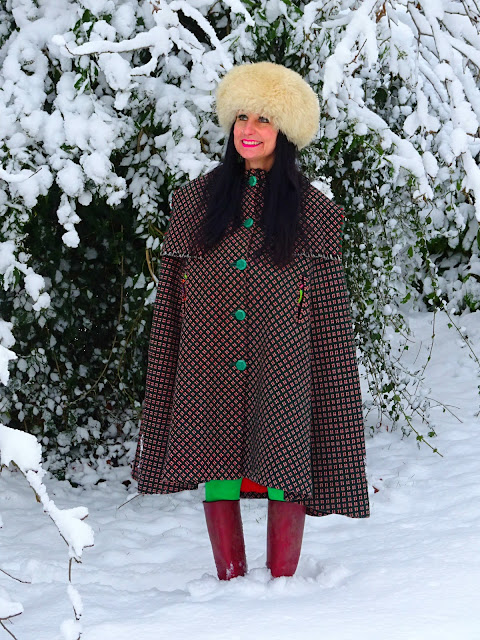 I'm linking to Patti and the gang for Visible Monday then I'm off upstairs to pack my India bag. I can dream of dusty villages, fiery sunsets and baking heat even if it's less than zero degrees outside.

Email ThisBlogThis!Share to TwitterShare to FacebookShare to Pinterest
Labels: Charity Shopping, It's All About Me