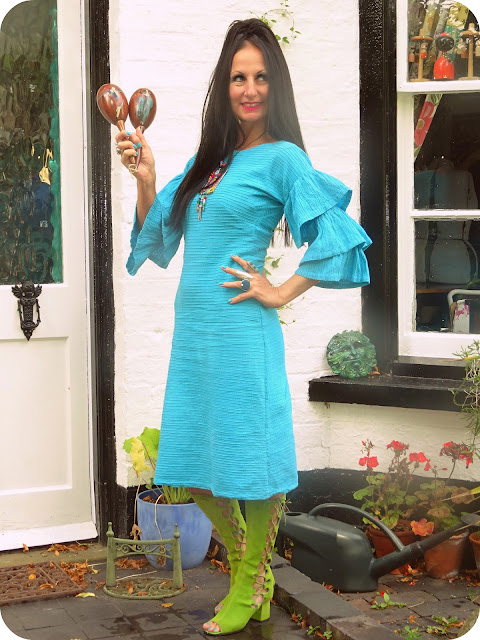 Unlike elsewhere in Blogland, you won't find any Autumnal fashion or earthy toned outfits in tweed and wool here. They may look great on other people but they aren't for me, it'd be a dull old world (and a bloody nightmare for the second-hand shoppers amongst us) if we all liked the same thing. 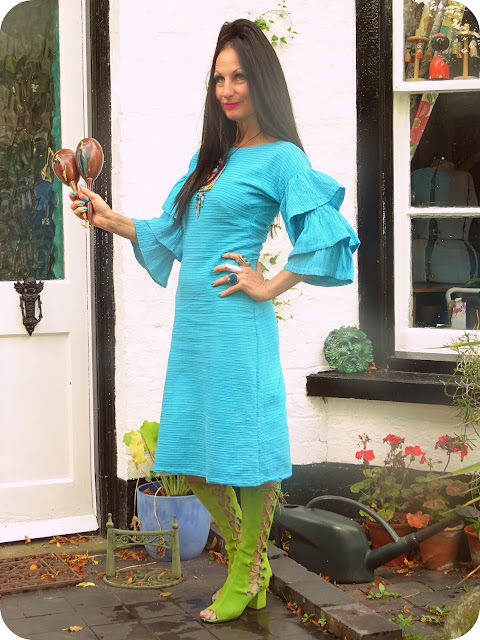 No, I'm quite happy to live on my own happy little planet of seasonably inappropriate, flamboyant cotton dresses and bare legs, worn until my skin turns blue and I'm forced to bust out the thermals and fake fur coats. 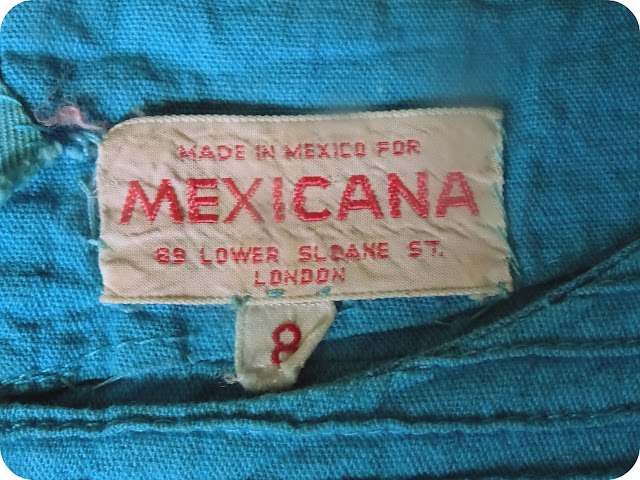 Remember me mentioning buying rather a lot of vintage gear at last weekend's Classic Car Boot? Well, here's the first of my finds. Browsing a sale rail (naturally!) some extravagant ruffled sleeves in a vibrant shade of turquoise ribbed cotton caught my eye and, on closer inspection, the label intrigued me. Although I wasn't familiar with Mexicana I knew Lower Sloane Street to be a posh part of London and when the seller told me that the dress was £5 I handed my cash over like a shot. 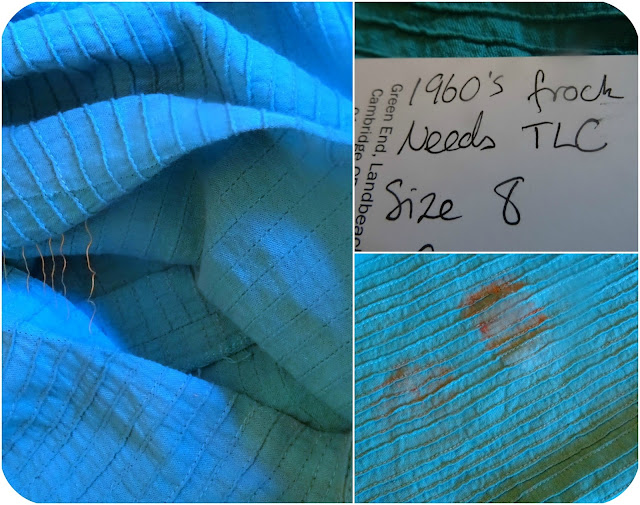 Needs TLC wasn't an understatement. With questionable stains and ripped-to-buggery side seams, the dress was crying out for attention but, to my surprise, the marks sponged off easily and sewing it back together was a doddle.

My next job was to research Mexicana. God bless Google!


Created by couturier & sack dress innovator, John Cavanagh (top photo with model) and celebrated fashion illustrator, Alfredo Bouret (the handsome devil in this photograph by Norman Parkinson), Mexicana was said to have been home to some of the most fabulous dresses of the late 1960s and early 1970s.

Born in Mexico in 1926, Alfredo Bouret's love of fashion and illustration won him a scholarship to Paris during the golden age of couture. His illustrations were in high demand and he attracted the attention of the greatest designers of the day, creating work for such luminaries as Balanciaga, Valentino, Chanel, Dior and Pierre Balmain. 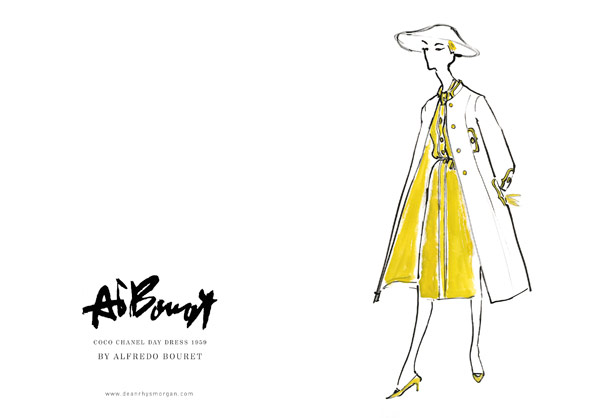 Even if you don't know his name, I'm pretty sure, like me, you'll be familiar with Alfredo Bouret's illustrations. 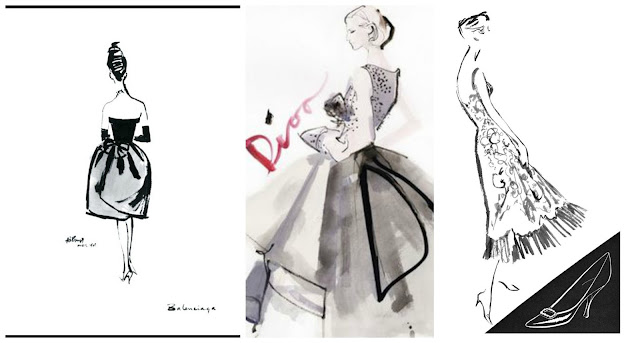 Although I couldn't find any, Bouret was widely admired for his illustrations of native Mexican costumes and, during the 1968 Summer Olympics, held in Mexico City, many people become interested in having the country's textiles referenced in their clothing.

During this time Alfredo was working for British Vogue and was approached by John Cavanagh, who asked him to assist opening the Mexicana boutique on Lower Sloane Street which went on to delight the London set for many years. 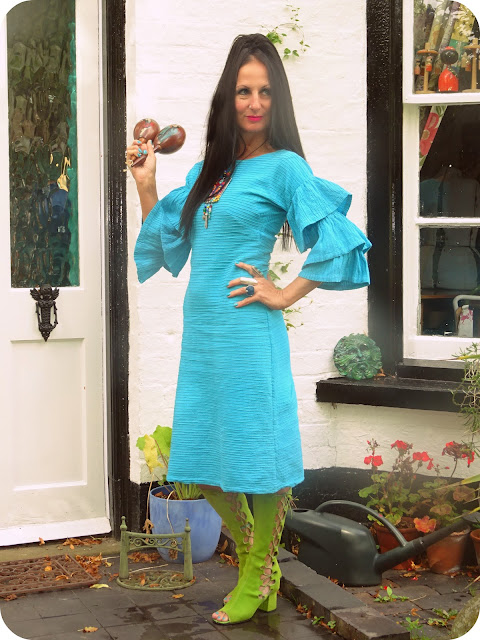 I'm not one of London's smart set, I'm just a vintage wearin' bird from the Black Country. 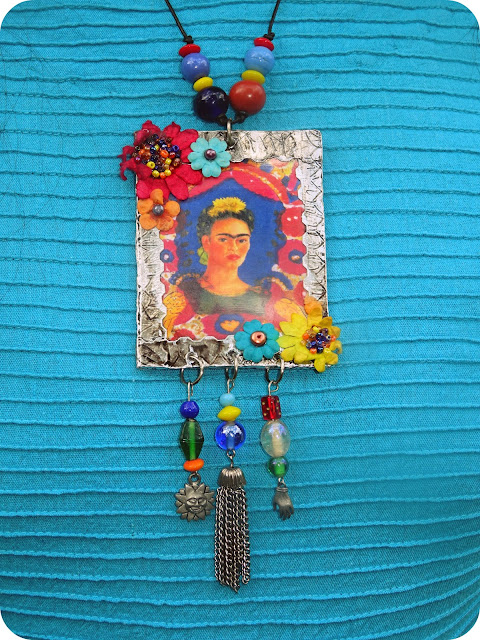 As opposed to my Great-Grandmama's pearls I'm wearing my Mexicana frock with a Frida Kahlo pendant (handmade by much-missed blogger, Tamera)...... 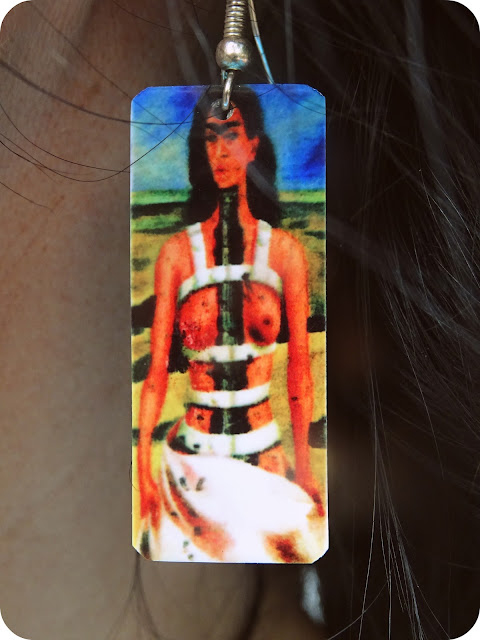 My latest Frida earrings from good friends, and End of the Road trading neighbours, Shilpa Silver....


...and shaking a pair of maracas bought from a jumble sale.

I'd celebrate my £5 bargain with a shot of tequila but I hate the stuff - a rum and cola after my tea will have to do.