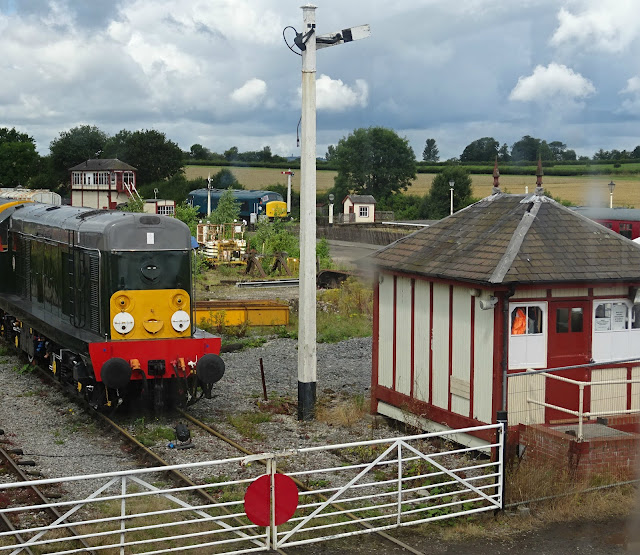 Now, that's what I mean about the spirit of Indietracks! One of our customers exclaimed when, not having any specs cases for sale, I opened my bag and told him to take mine. 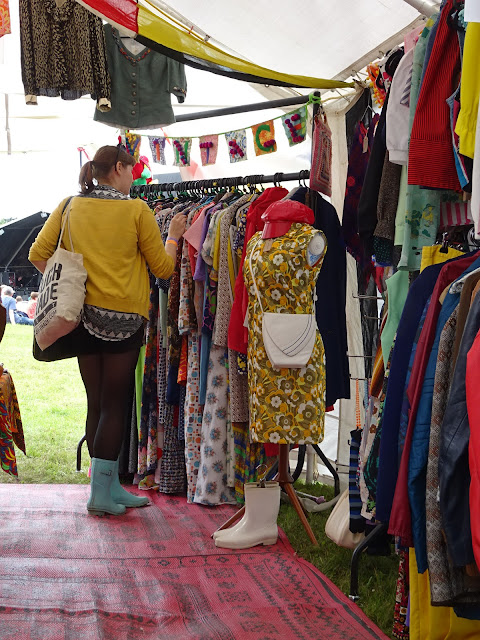 After the shambles that was Truck it was a joy to be back at Indietracks, a tiny music festival combining steam trains with indiepop music, an hour's ride up the road in Derbyshire (or slightly more if, like us, you drive a vintage VW campervan). Over three days more than fifty bands from all over the world perform on three stages and on the steam trains themselves. There's real ale, five food stalls, art, craft and political activism workshops, band merchandise, a wild bird rescue display and.......us! 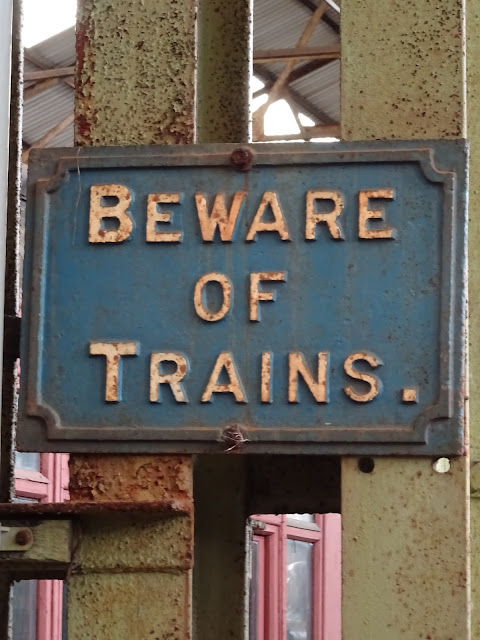 After seven years of going to Indietracks , originally as indie music fans and, more recently, as traders,  we've got to know many of the festival goers who, like us, come back again and again (Big love especially to Nat!) Unlike Truck, Indietracks is safe, clean and friendly and this year, the only thing that wasn't well behaved was the weather.

We arrived on Friday morning and pitched the trade tent in gale force winds. To add to our woes when we'd taken the tent down at Truck last Monday we managed to bust the entrance zip after hammering it too tightly shut with a tent peg to keep out the invaders. The manufacturers didn't have any replacement panels in stock but found some seconds in their storeroom and kindly next-day couriered them over to us. When we set the tent up we realised that the warehouse had packed the wrong size panels and they were too big by two metres. More by good luck than judgement we'd brought the knackered panels with us so used them and left the tent open at night. But it's Indietracks, everyone is lovely, the arena shuts at midnight and other than the caterers we're the only campers on site. 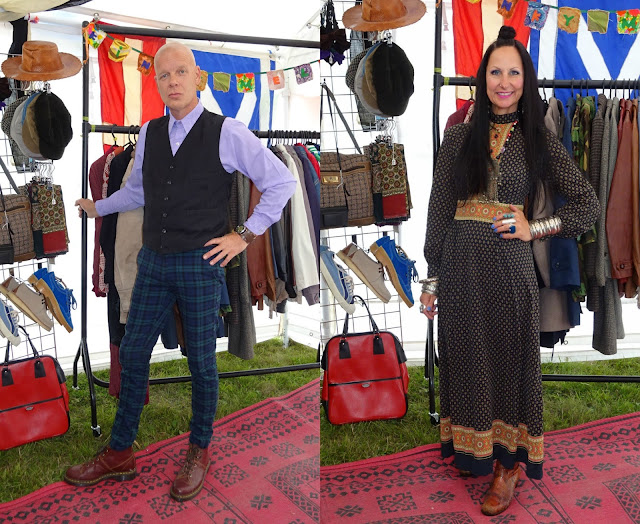 Just before the site opened to the public the temperature plummeted and rain decided to lash down. The organisers sensibly decided to move the bands to an indoor stage, which was great for the revellers but not quite so good for trade. Still, by the time we closed, we'd covered our pitch fee and the pressure was off. 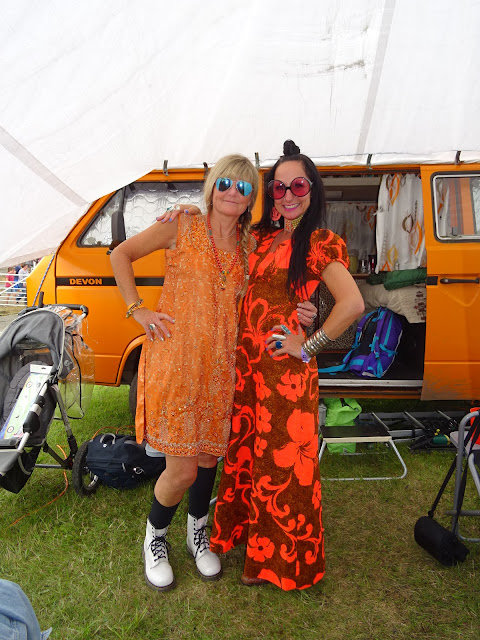 It was glorious when we emerged from Gilbert on Saturday morning and we sat in the sunshine enjoying our breakfast. I'd won Goody's giveaway on her blog and, when I picked the parcel up from the Post office on Thursday afternoon, found she'd very generously included this amazing vintage day-glo' orange Hawaiian maxi in with my rubber chickens (more on them soon). I match both Gilbert & my gorgeous mate Jeni rather well, don't you think? 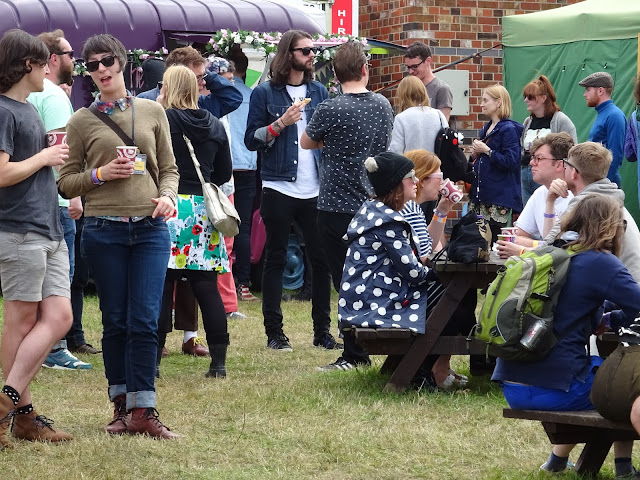 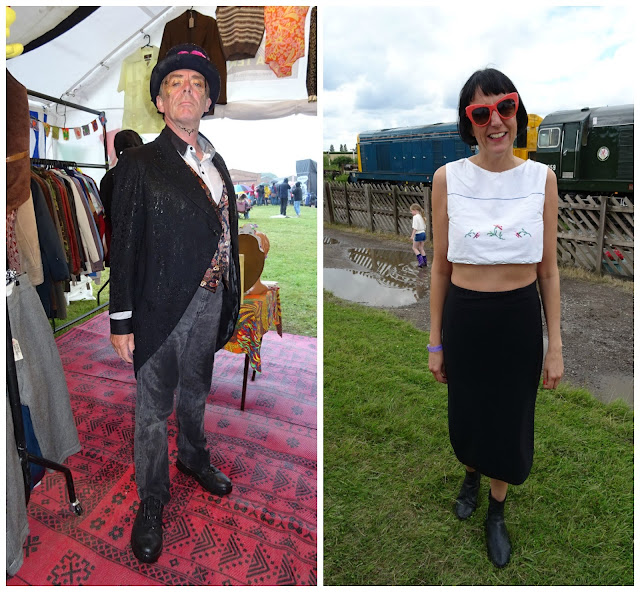 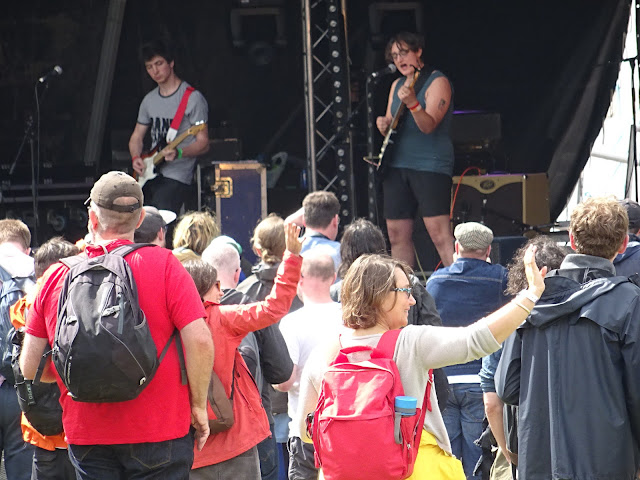 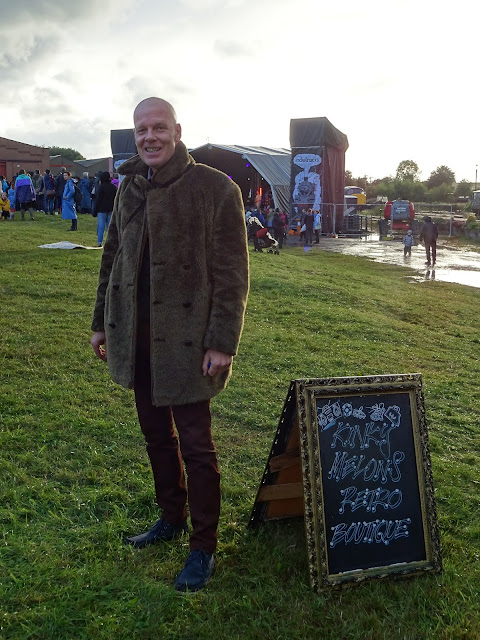 Needless to say this is England and the weather can't be relied upon. By mid-afternoon we were in fake furs. 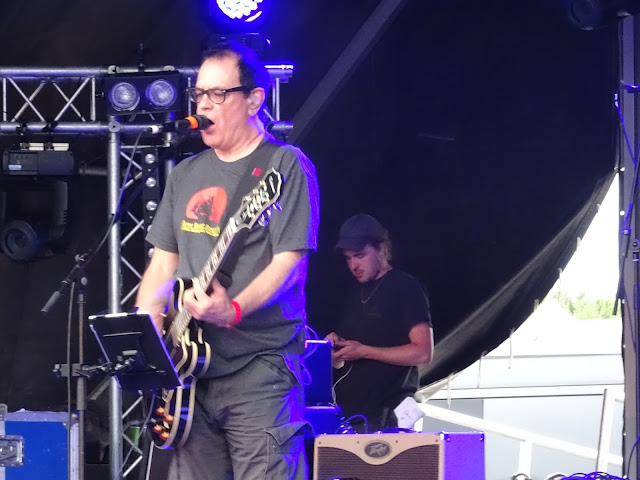 By the time headliners The Wedding Present took to the stage the heavens opened but did that spoil the fun? No way! They were magnificent. I can't believe it's been 30 years since the release of their album, George Best (which I bought on cassette as there wasn't enough room in my student hovel for a record player!) 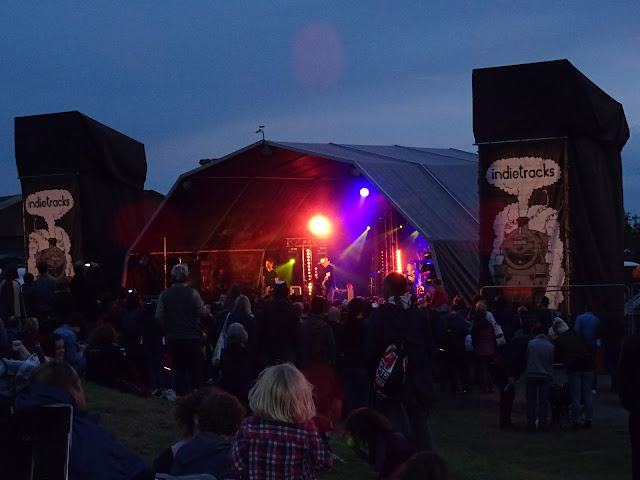 Last weekend our neighbours were people, this time they were trains. This beauty has been freshly restored and new to the Midland Railway Museum this year. 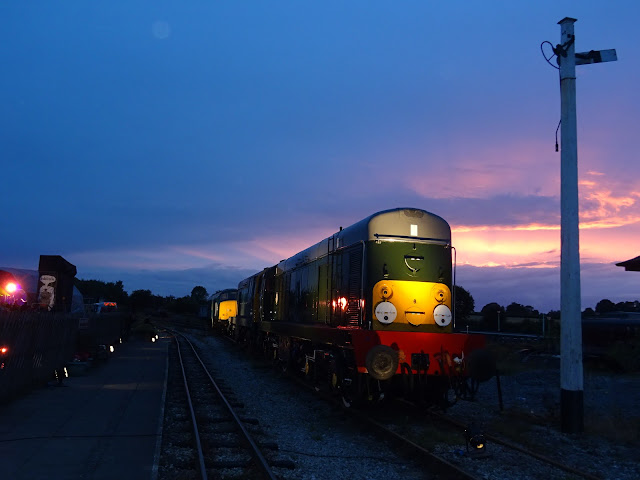 I'm more than a little in love with his smiley face. 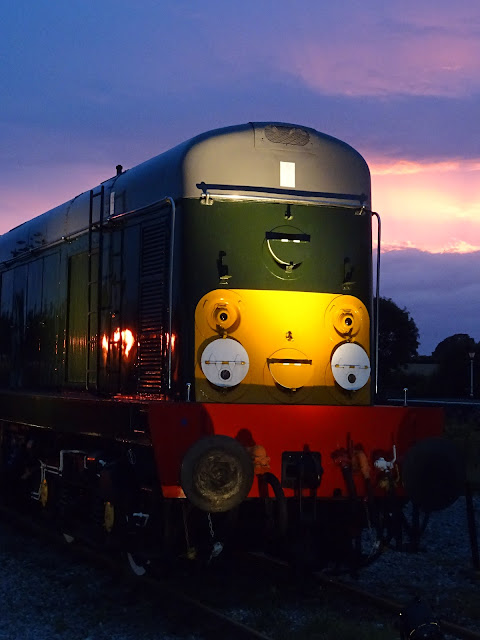 What's the best thing about being two of only a handful allowed to camp on site? We get to play with the trains before the festival gates open! 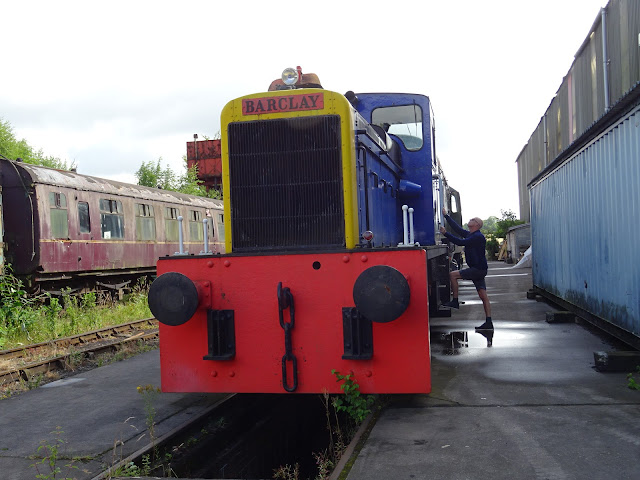 There's something wildly exciting about having the entire museum to ourselves. 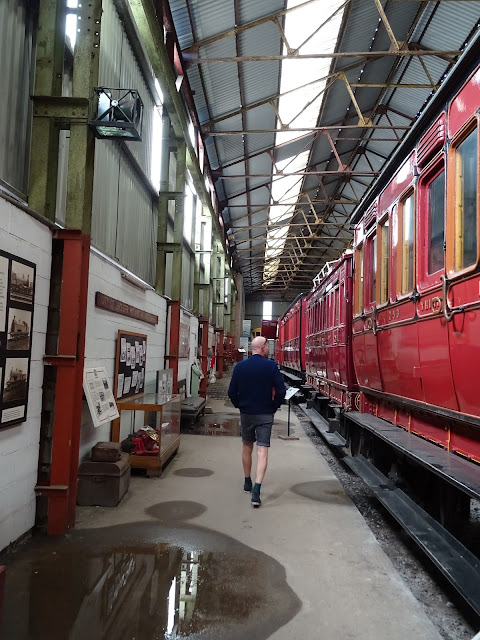 This Milk Tank is their latest acquisition. 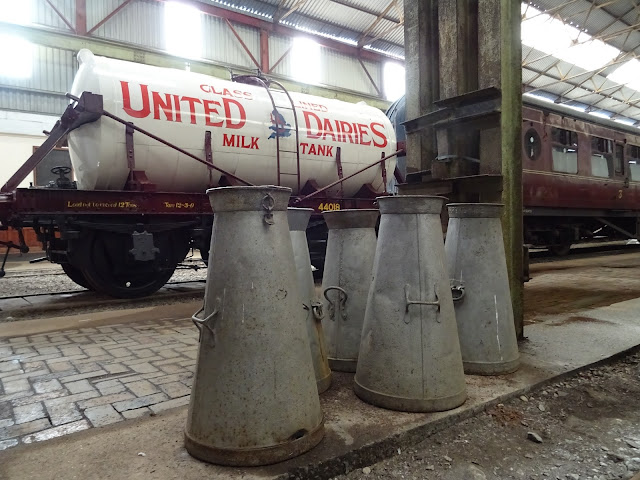 My favourite had to be the mail train. 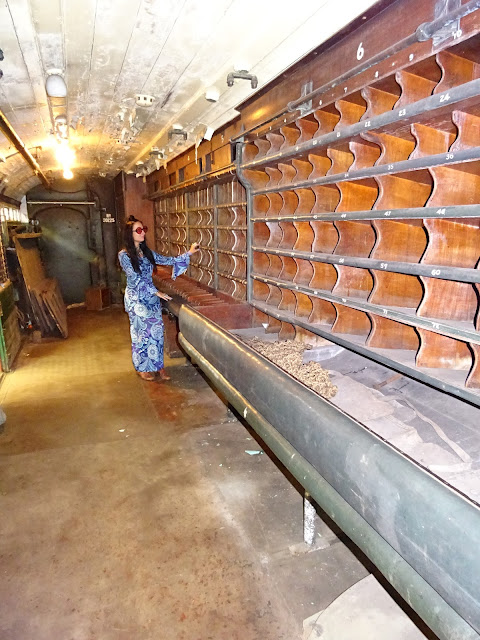 It looks absolutely ancient so we were amazed that it was only built in 1956 - just ten years older than us! I bet Drew from Salvage Hunters would kill for those pigeonholes, wicker hampers and that wonderful armchair. 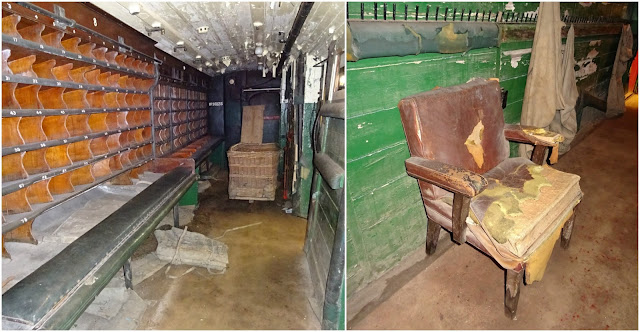 On our way back from exploring the railway volunteers who drive the narrow gauge train up and down the track asked if we'd like our own personal ride as they said that they felt a bit sorry for us having to work and not join in the fun. 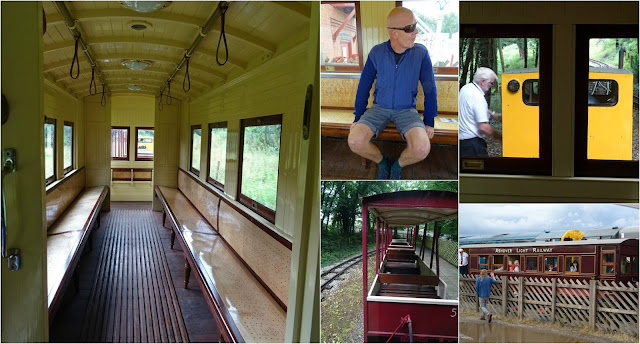 We didn't need asking twice! A leisurely 20 minute train ride in a lovingly restored 1920s carriage - it took one man seven years to perfectly restore it. 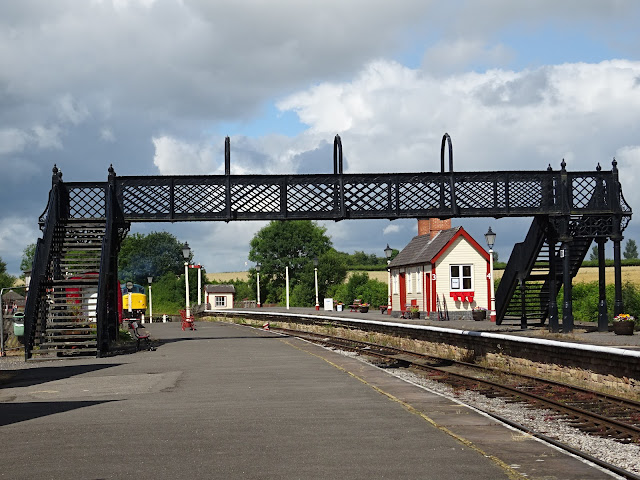 I wanted to wear my Thomas the Tank Engine dress but I'd checked the weather forecast before I left and it would have looked rubbish with a thermal vest underneath...maybe next year. 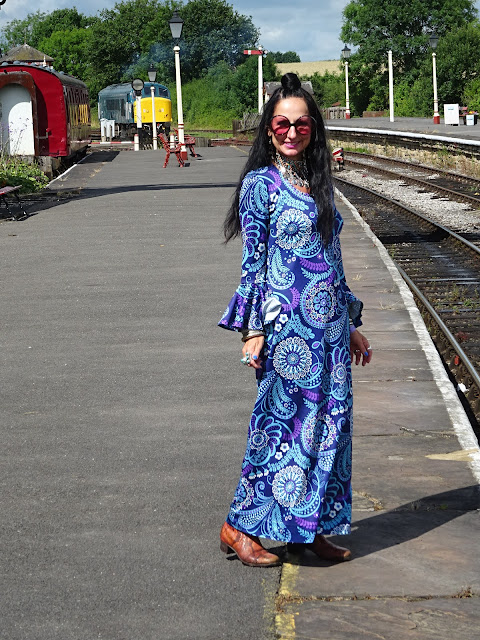 Just like last year, Sunday's sunset was accompanied by a beautiful rainbow. 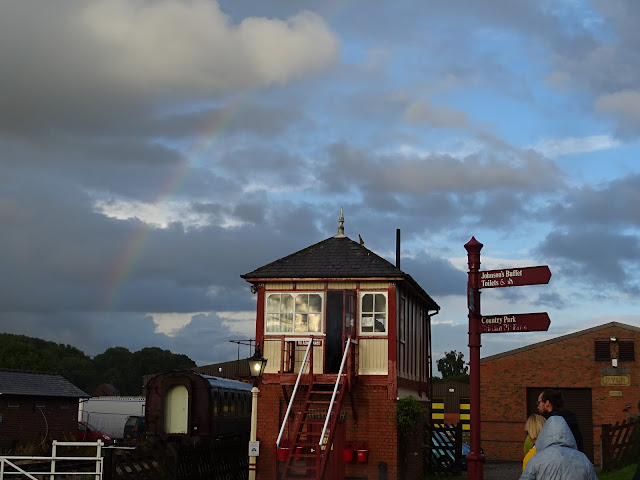 Thanks Indietracks for restoring our faith in music festivals (and humanity.)