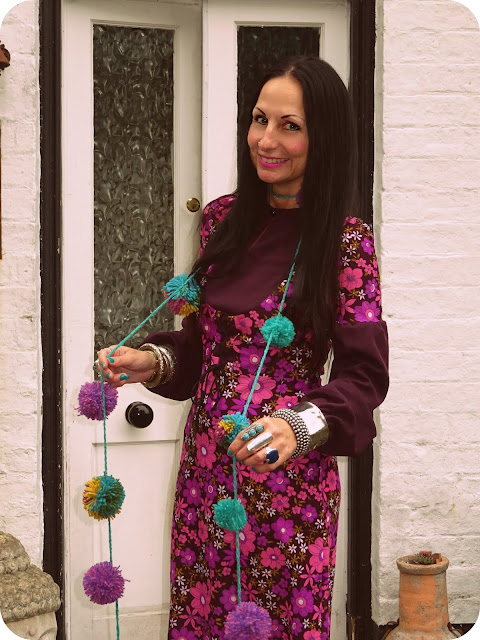 There's a distinct nip in the air, Jacob (our tortoise) has gone into hibernation and I've finally packed away my backless, halterneck maxis replacing them with the Crimplene, Lurex and velvet dresses I'd had stashed away since the end of the Spring. 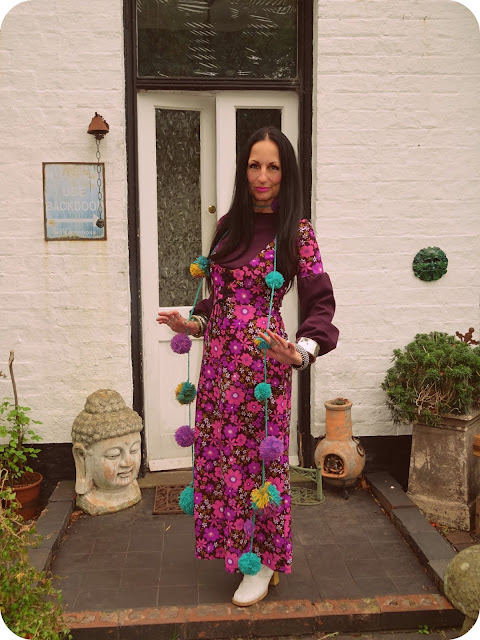 While I'm not exactly happy about the change of seasons.....dark mornings & afternoons, bastard massive spiders in the house, the death of the car boot sale and the end of sandal weather. Seriously, how can anybody get excited about wearing tights? They're the work of the devil. But there are one or two good things about the end of Summer, colder weather means business is brisk, it's peak selling season for coats, jumpers, tweeds and velvet and we've got plenty on our rails. TV gets better with new series of The Apprentice, The Fall and The Missing, made all the more exciting when combined with rum & coke and a real fire crackling in the grate. 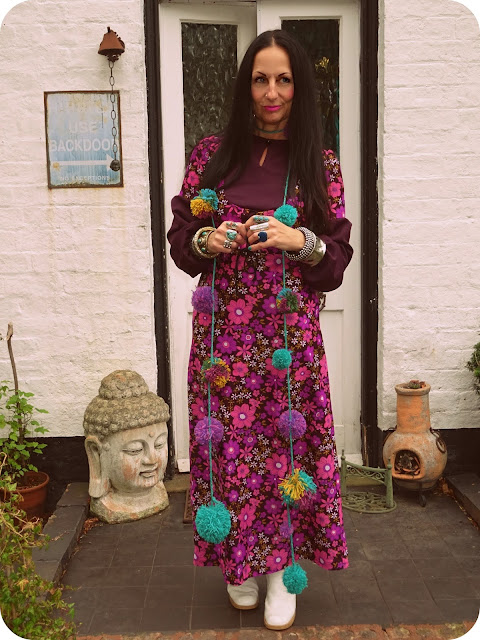 When we were charity shopping yesterday I found eight pom-pom makers in varying sizes (like THESE) for a piffling £1.49. Jon and I set to work and, fired up with a couple of large glasses of red, got a bit carried away. Before the opening credits of The Apprentice I'd got myself this pom-pom boa. Its definitely quicker than winding wool around a cut-up cereal box.

During the Summer I've zero interest in cooking but now, with a glut of apples from our trees and the opportunity to cling to the cooker for some extra warmth, I'm quite happy to mess about in the kitchen. This was my attempt at a cereal bar we could eat on the go when we have to leave at mental o'clock and haven't got time for any breakfast. It's sugar and fat-free, not because I've a problem with eating them, I just didn't have either in the cupboard. 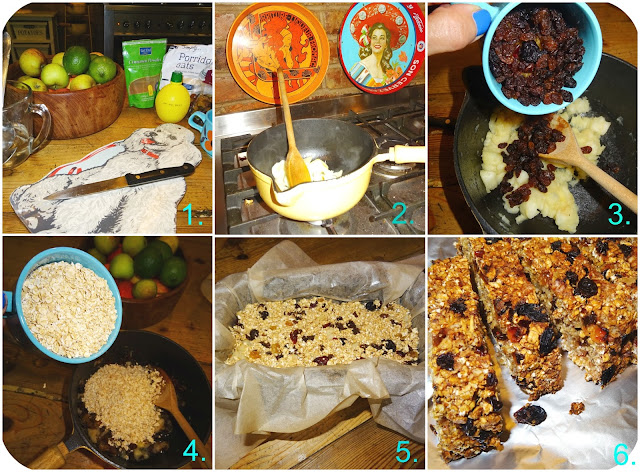 You'll need 5 medium sized cooking apples, 2 cups of porridge oats, juice from half a lemon, 1 cup of dried, mixed fruit, 2 tablespoons of tap water and a teaspoon of ground cinnamon. 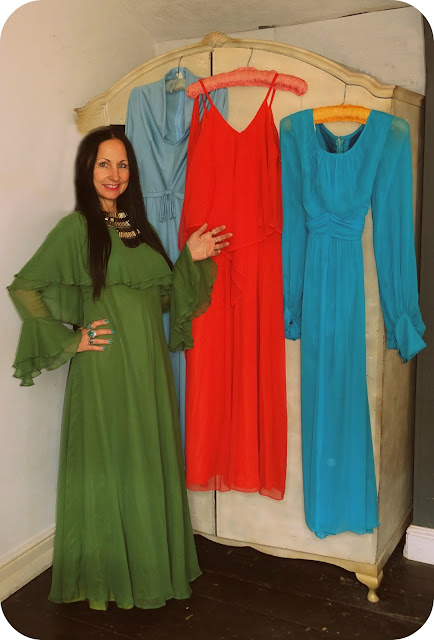 Did I mention the death of car boot sale? Admittedly the last few weeks have been crap but on Wednesday my favourite trader was back and these five beauties (there's a black one behind me, but you'd never know) were ours. Two, including the green silk one I'm wearing, are from the rather lovely vintage British label, Jean Allen.  The stallholder was so pleased to see me that she gave me a brand new pair of Jane Shilton (who I thought only made handbags) suede platform soled boots in my size for free. That's my Autumn footwear sorted! 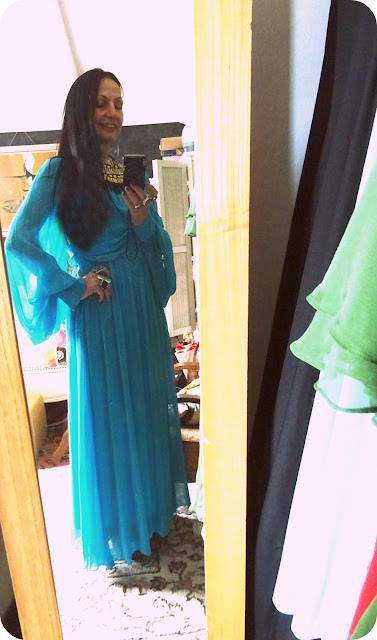 Of course I broke the cardinal rule and tried a couple of dresses on, predictably falling madly in love with a voluminous sleeve or two. Not to worry though, I've followed Vix's law and swapped the two new additions with four things I already own. Expect several familiar frocks to be gracing the Kinky rails/website very soon! 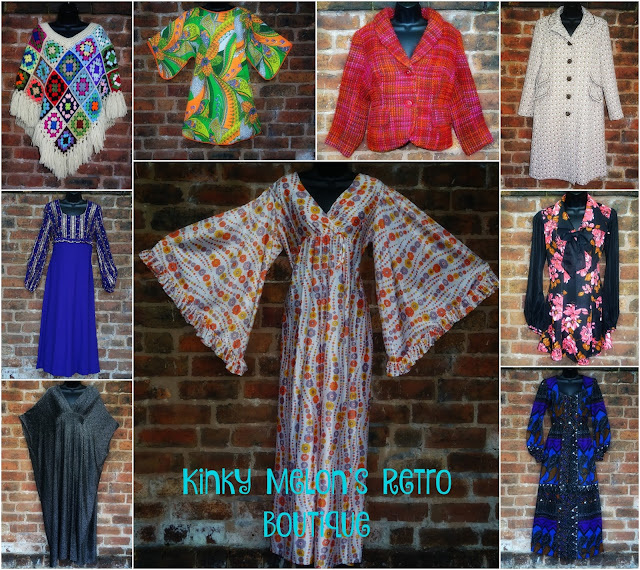 Here's just some of the vintage stock you'll find on our rails this weekend! 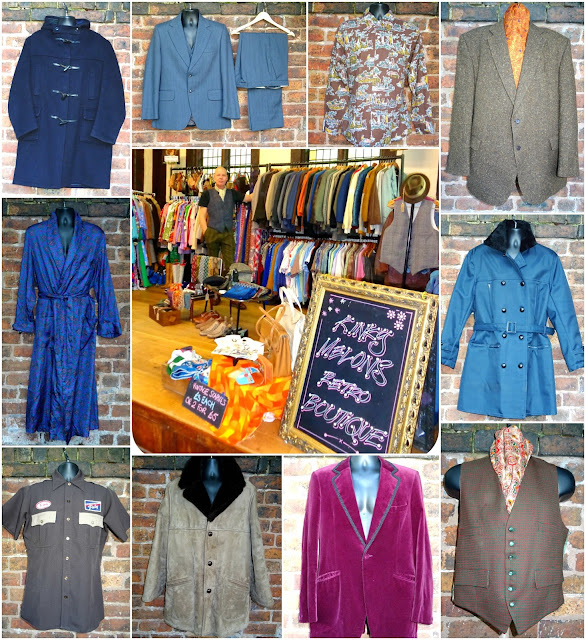 We're trading with Judy's in Cumbria on Sunday and we're bringing along the finest vintage available to humanity.  It'll be brilliant to see you if you're around (details HERE), if not have a fabulous weekend!