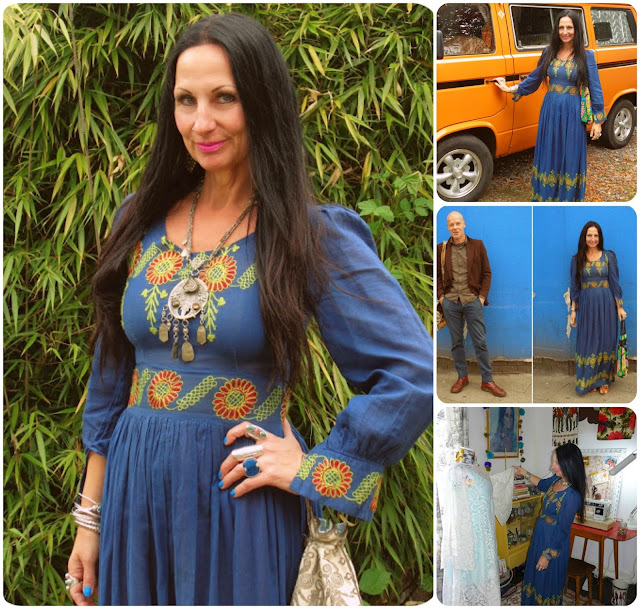 Of all the dresses I own this embroidered Indian cotton maxi, which belonged to Sabine's mother in the 1960s, has to be a favourite. Scared to wear it to death, I've been on the hunt for a back-up for ages. Waiting for Jon to get his arse in gear for a day of charity shopping I did my weekly trawl through eBay, finding "Long blue 70s dress" listed in a non-vintage category (the best stuff often is). The dress had a starting bid of £5 or a Buy It Now option of £8. I saved it to my watch list, went to clean my teeth and had a word with myself. You want to risk missing out on that dress for the sake of three measly quid? What on earth's the matter with you? I ran downstairs, clicked Buy It Now and less than 24 hours the postman handed it over.

Listed as having a few marks I chucked it in the sink with some warm water and a couple of squirts of Lidl's liquid hand soap, leaving it to soak for half an hour. I rinsed it out, folded it inside a bath towel, got Jon to help me wring it out and then hung it to dry on a coat hanger on the washing line in the shade. 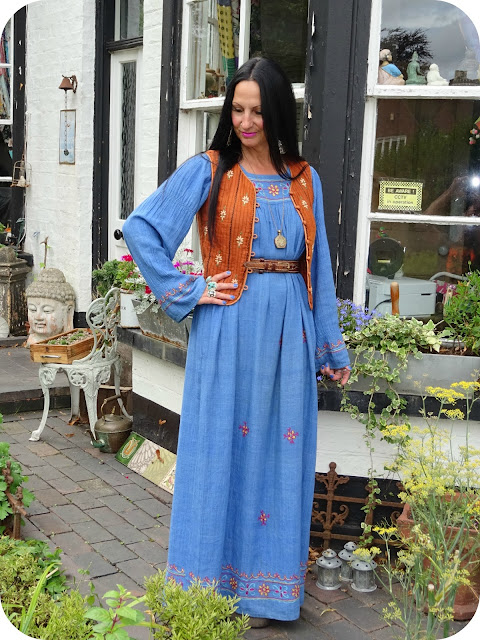 When I put it on this morning it suddenly dawned on me that I'd tried on an identical dress in Dolly Mix Vintage in Leicester when Curtise, Tania & I visited back in March. I loved it but couldn't justify the £35 price tag - good things come to those who wait. 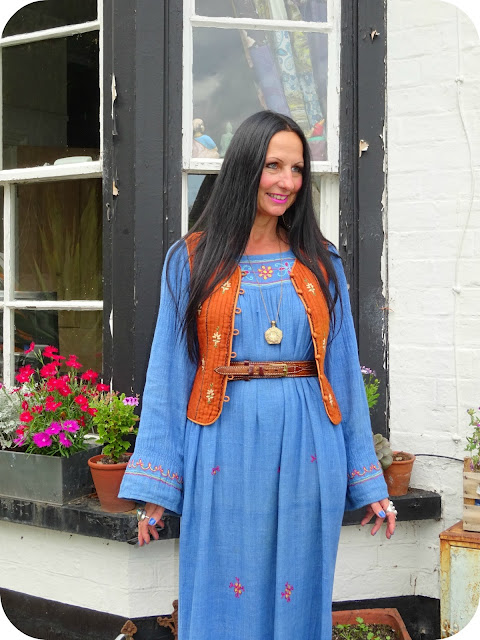 As it's a bit on the long side I had to wear it with boots to go out this morning, not the best option as we're having a hot spell this week (hooray!) but luckily fortune was on my side and just look what I spotted in one of the chazzas we visited, 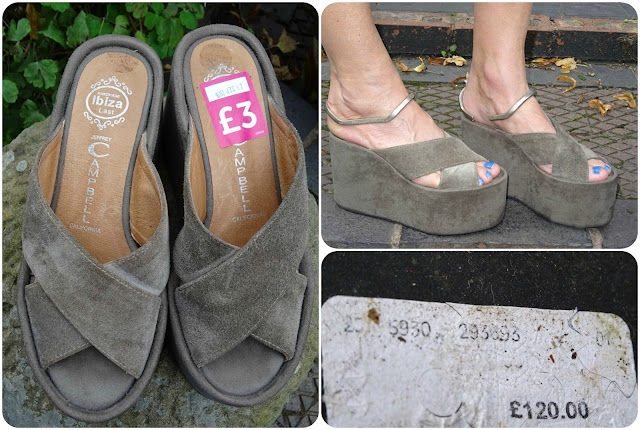 Yep, a pair of brand spanking new £120 Jeffrey Campbell suede flatforms (as the hipsters call 'em) for a bargain-tastic £3! I'm beginning to think the Black Country is home to a legion of Imelda Marcos wannabes. 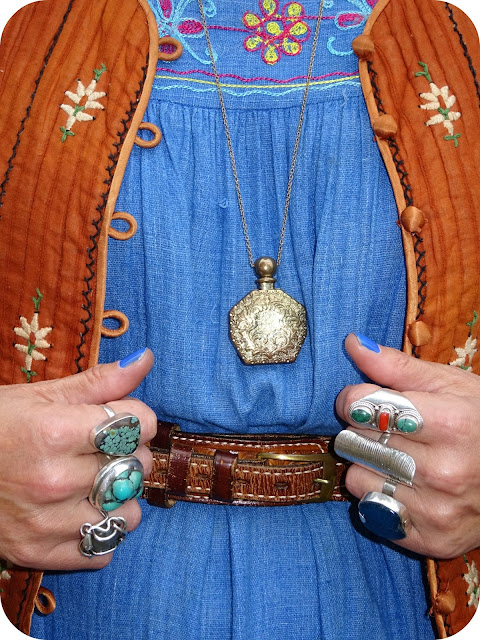 ...and just as I was handing over my three £1 coins I spotted this engraved brass perfume bottle pendant hanging up next to the counter and priced at 25p. I bought a silver one from a hippy shop in the back streets of Sliema in Malta back in the 1980s which vanished into the ether years ago so it's a timely replacement.


My whole outfit cost £12.75. Whilst not as cheap as my End of the Road ensemble, it proves that it's  still possible to find affordable vintage on eBay and that all charity shops aren't full of overpriced Primarni/George @ Asda tat. 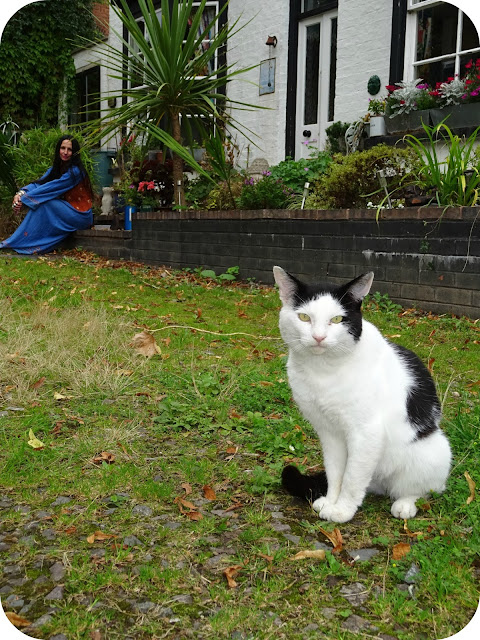 Time to introduce you to Frank, a stray tom who's been visiting us for ages. He was extremely timid and very skinny when we first met him but over the months he's piled on the pounds and even allows us pick him up for a cuddle. Don't ask why he's called Frank but it's definitely a better option than Adolf, after a few people pointed out that they have a remarkably similar hair style. I didn't think shouting "Adolf" down the avenue when it's tea time would have gone down well with the neighbours. 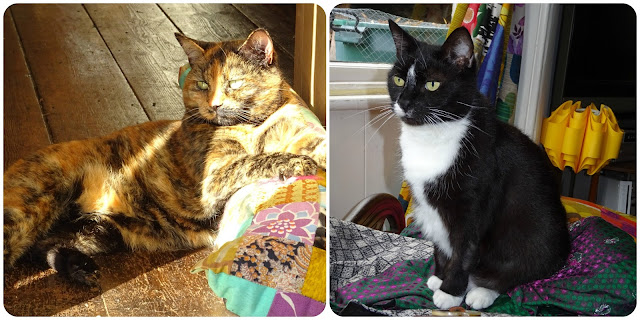 Amazingly Polly Piglet (aka The Queen of Sheba) and Stephen Squirrel don't seem to mind him dining on the door step. 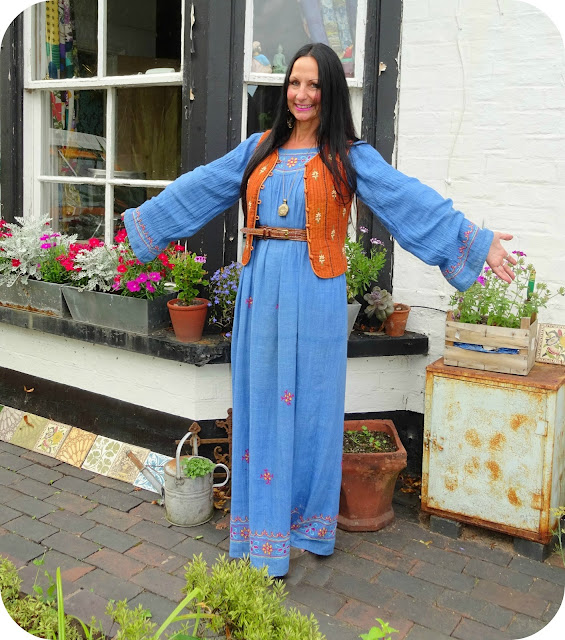 A whole weekend off. We're dining in tonight,  I've toasted a blend of spices (using THIS recipe) for a Sri Lankan-style green bean curry (recipe HERE) and the house smells incredible. Tomorrow we're out on the town, watch out Walsall!

Whatever you're doing have a good un!