A Week in the Life - Weapons of Mass Destruction, Voodoo Heads & An X Factor Encounter 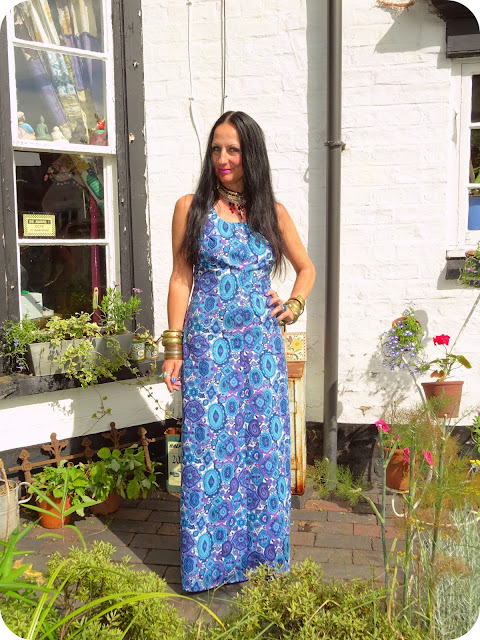 What a week! Gardening, shopping, car booting, washing, mending, housework, tie-dyeing, shredding Levi's denim, waterproof bunting making, moving the stock into the new Kinky shed, reading in the sunshine (Laurie Lee's Red Sky At Sunrise, what a joy - why on earth did I wait until my 50th year to read him?), taming stray cats, finding vintage bargains on eBay, watching very little (but quality) TV (the BBC's gripping adaptation of Conrad's The Secret Agent and Beck, the latest in BBC 4's Scandi Noir) and socialising. Not exactly a restful seven days but definitely time well spent. 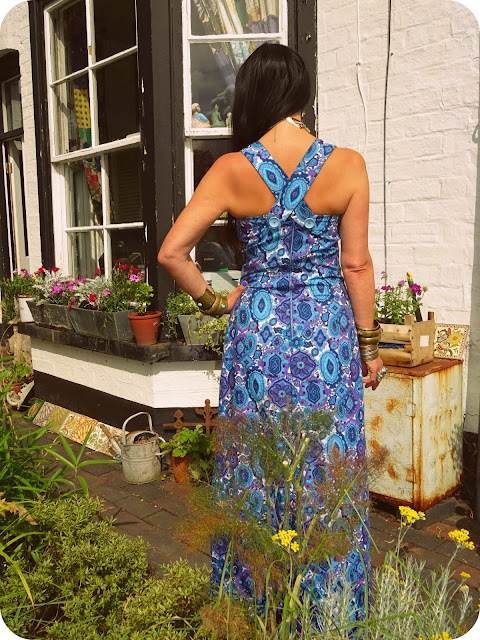 With our mini heatwave it's been cotton maxi weather all week long. I'd made this dress from some vintage fabric Em gave me (last seen here) but wasn't happy with the fit & after wearing it once chucked it in the bottom of a drawer and forgot about it. Three years later I finally found the time to unpick it, resew the seams, add some darts and replace the cheating press studs with proper buttonholes. 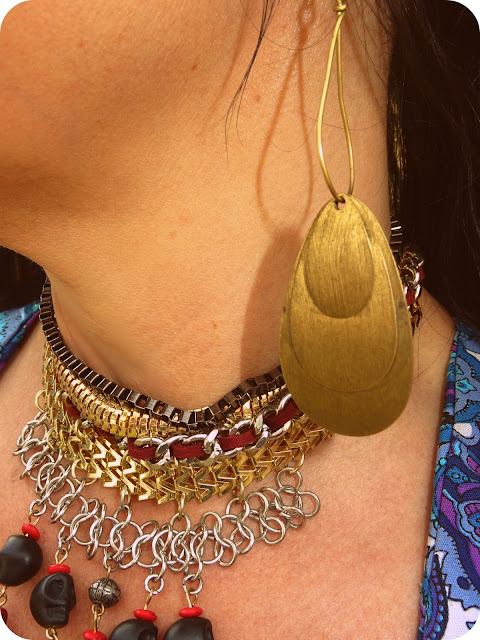 Accessorised with some brass earrings I bought in India from a womens charity project years ago. 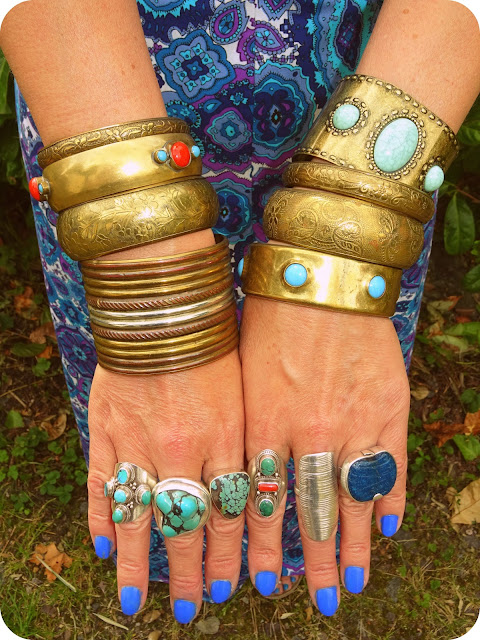 A heap of brass bangles, mostly inherited from my Mum. 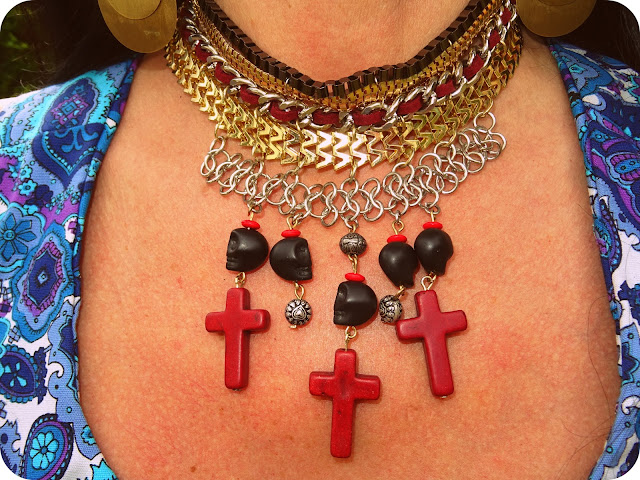 And this fabulously blingy Freedom at Topshop neck piece featuring crosses & voodoo heads - unworn and still on the original card - retail price £18.99 but mine for £3 from Age UK. 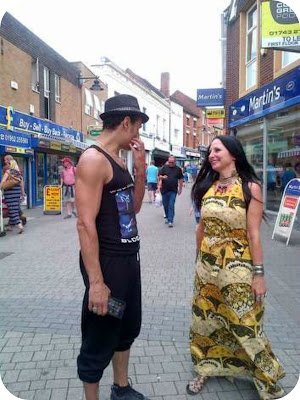 Did I mention socialising? Sitting in 'Spoons on Saturday with some mates we spotted a crowd gathering in the street outside. When we realised it was Chico we abandoned our pints and we rushed out to say hello. For non-Brits or those too high brow to watch populist TV - he was Sharon Osborne's controversial quarter finalist from The X Factor back in 2005. 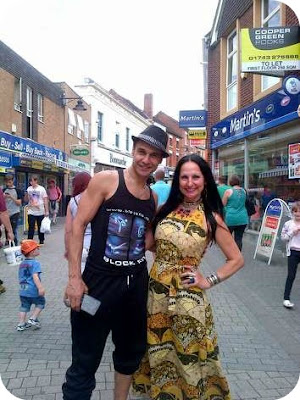 I've no idea what brought him to an obscure market town in Shropshire but he was so enamored of my outfit (me-made from a vintage curtain) that I couldn't get a word in edgewise to ask. Darling, you look beautiful. What do you do for a living? He asked. When I told him he told me that I was a fantastic ambassador for vintage clothes. The world would be a much better place if everyone dressed like you. What a sweetie.

We've found some gorgeous vintage clothing over the last week but that's work-related and, as I'm on a break, here's a couple of things we bought for us. 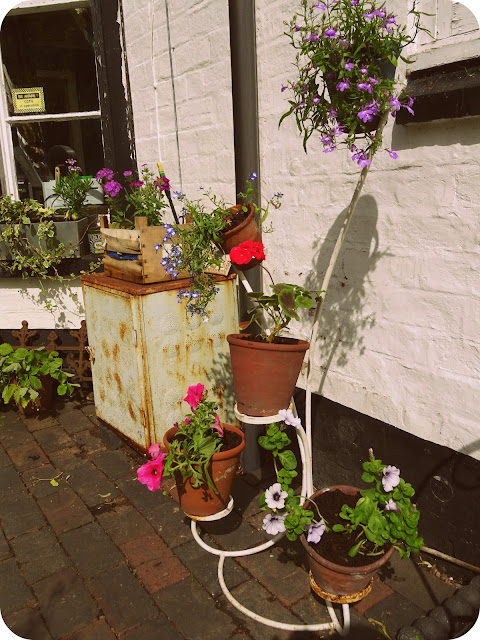 This vintage ironwork planter was from Wednesday morning's car boot sale and came from a florist's shop. 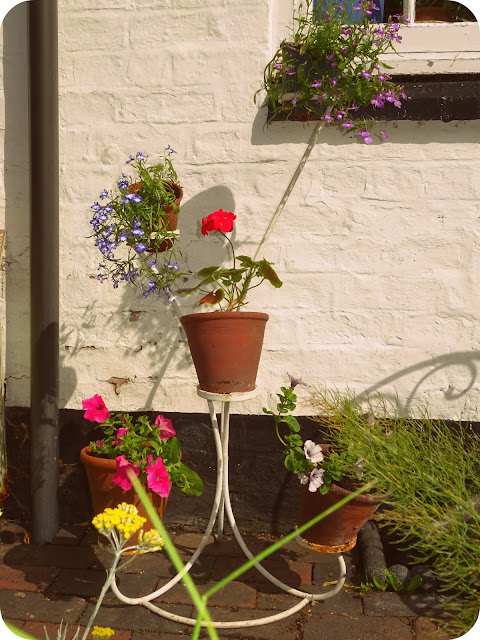 What started off as a bargain at £1 ended up costing us £13.95 after we'd bought potting compost and plants to pretty it up. 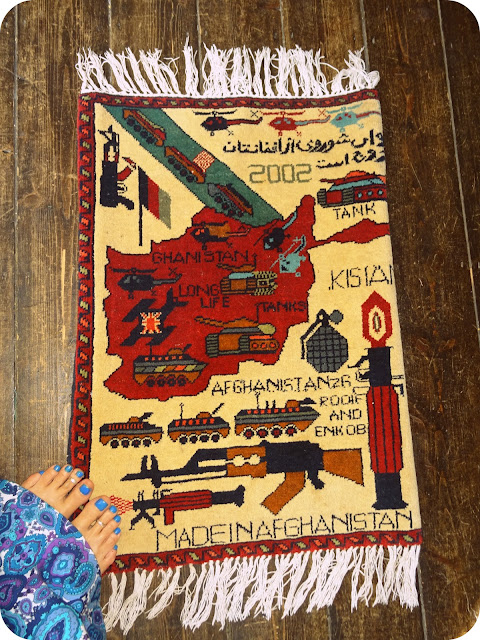 I've always hankered after a war rug and pounced on this one, priced at just £2 in the first charity shop we visited on Saturday which led to Jon being asked a million and one times if it was a magic carpet he was carrying as he walked around with it rolled up under his arm. This was a tourist piece made for NATO troops by Afghani craftsmen. I love it. Who needs girly floral motifs on your floor when you can have Kalashnikovs, rocket launchers, tanks and hand grenades? 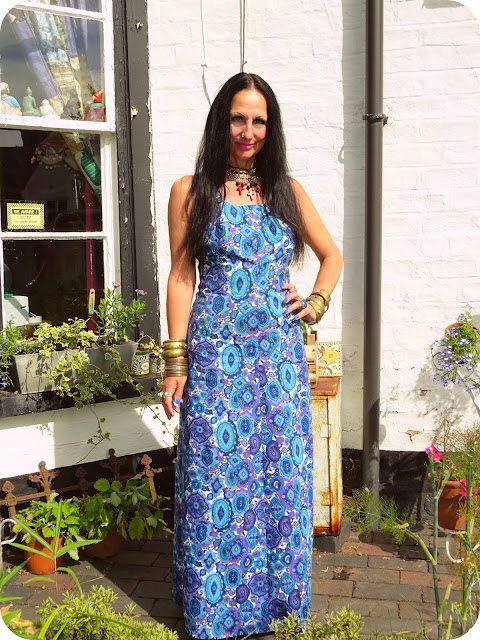 That's me done. I'm off to spend the day in Wetherspoons. See you soon!

Email ThisBlogThis!Share to TwitterShare to FacebookShare to Pinterest
Labels: Charity Shopping, Out and About, Stuff I've Sewn