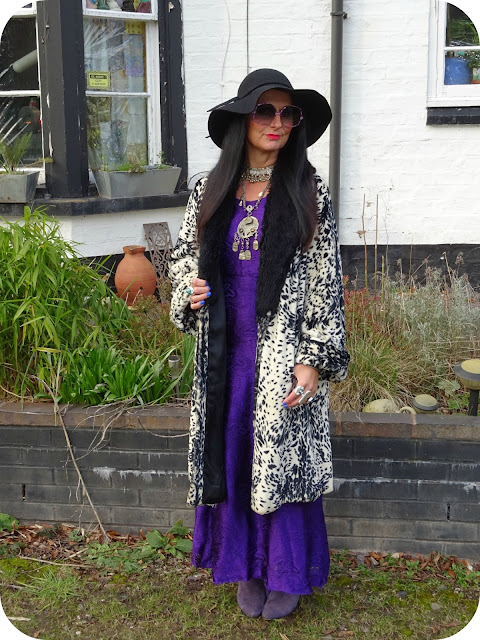 The BBC warned us that we'd need big coats and sunglasses yesterday and they were right, glorious sunshine and icy cold temperatures were the order of the day, so out came the 1950s fake fur and massive 1970s specs for our weekly chazzing trip.


Did you think I'd exhausted the India photos? Be warned, they ain't over yet! 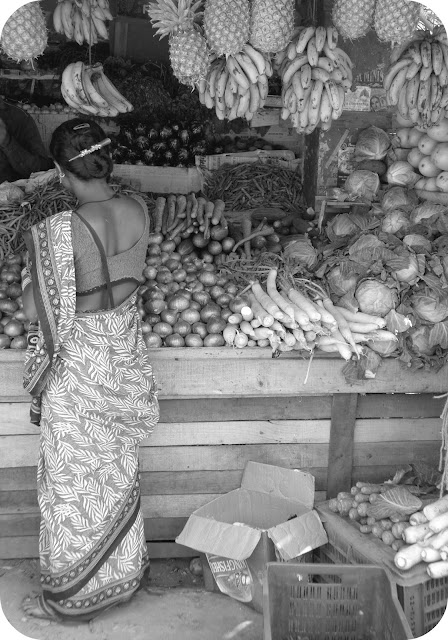 After our adventures in Mumbai we flew back to Dabolim, returning via tuk tuk to Palmira's guest house in Benaulim, where we'd stayed during the first few days of our trip. Ten days of sunshine and the legendary Goan sossegada (the Portuguese word for free and easy living) lay ahead. 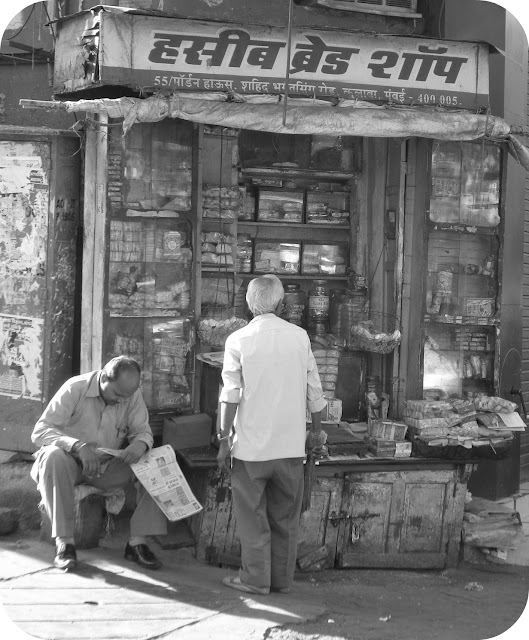 The great thing about Benaulim is its close proximity to Margao, Goa's atmospheric second city packed with crumbling Portuguese-era buildings and dusty side streets. The bus from Benaulim to Margao takes 20 minutes and costs 10p so we'd often spend a couple of hours here in the morning, exploring the streets, wandering around the covered market, drinking lime sodas in colonial-style cafes and haggling for bargains. 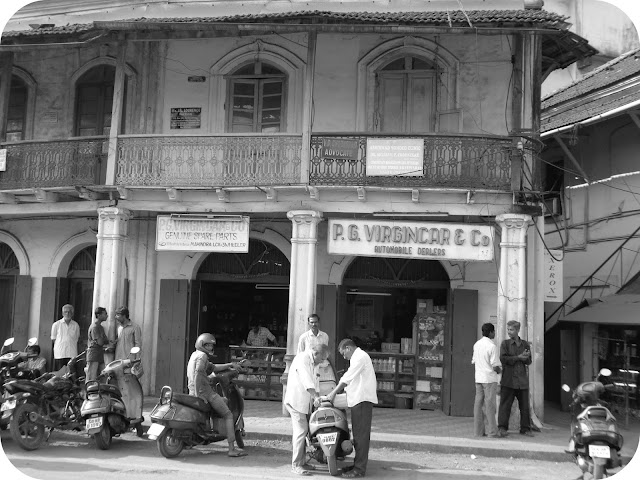 Although street life in India is usually a riot of colour, I thought I'd capture Margao in black and white, how it would have looked in the pre-1960s tourist photos, back in the days of Portuguese rule. 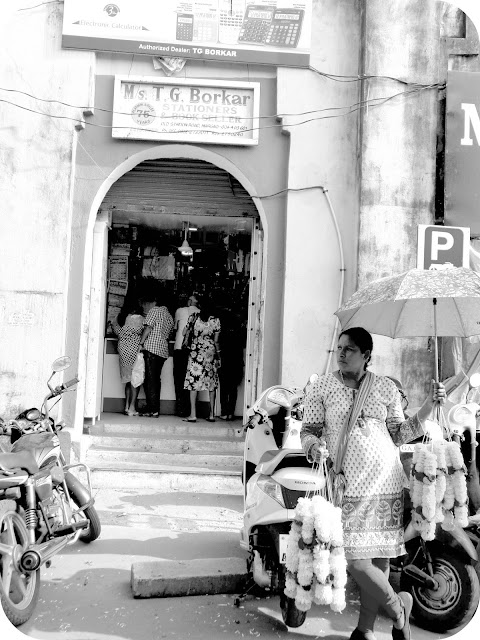 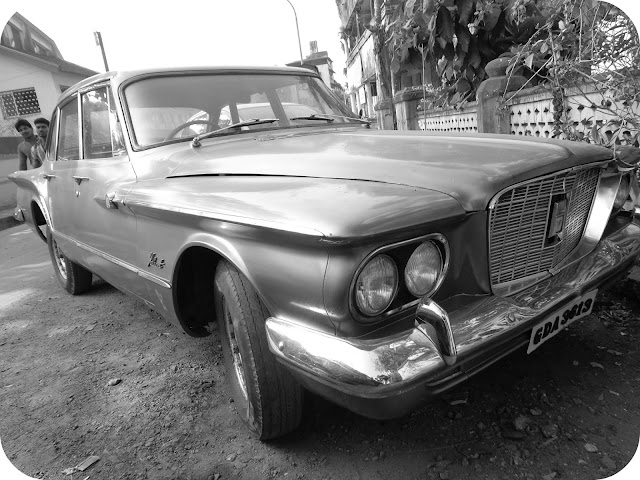 This sexy beast of a car was imported from California by the young man who owned it. There's a growing passion for vintage cars amongst Goa's young and hip. 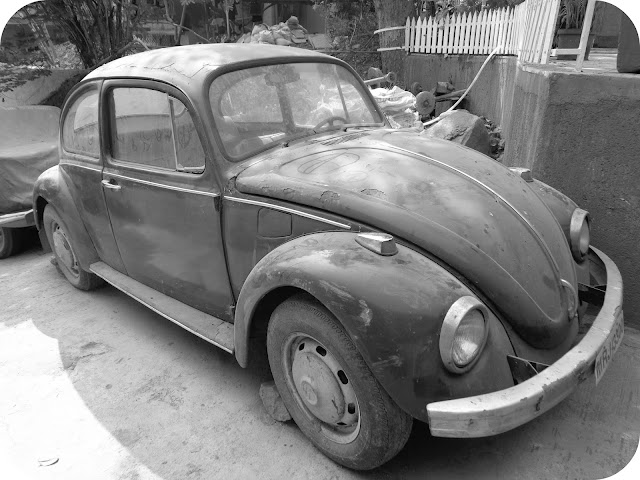 Jon was excited to spot these two beauties as he's owned both Moggies (Morris Minors) and VW Beetles in the past. 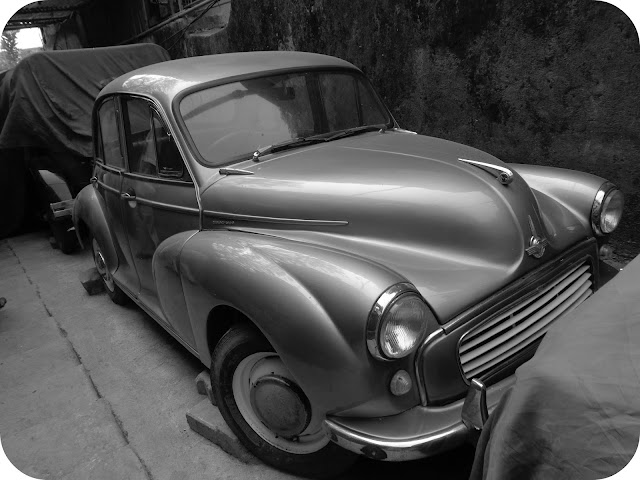 We spent hours in the legendary Golden Heart (and bought some interesting things). Some of the books were so dusty they must have been there since it opened in the 1940s. 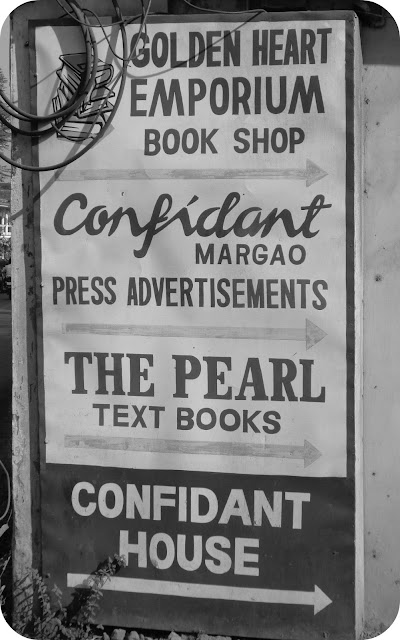 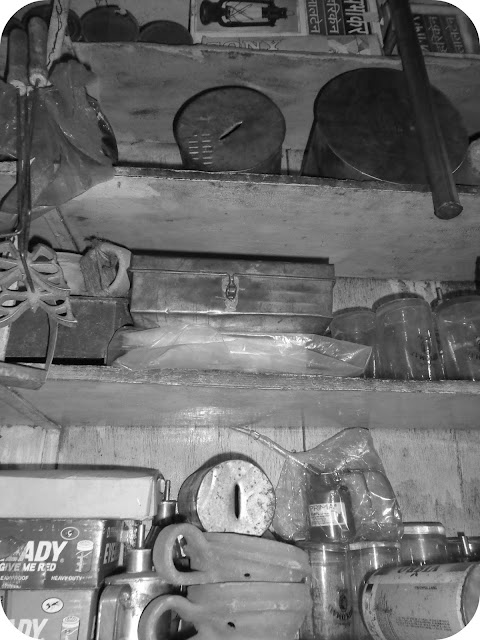 An elderly man ran this fascinating market stall, packed to the ceiling with rubbish he'd rescued and recycled into useful household objects. I bought a couple of things from him but our India purchases are going to have to have a post of their own. 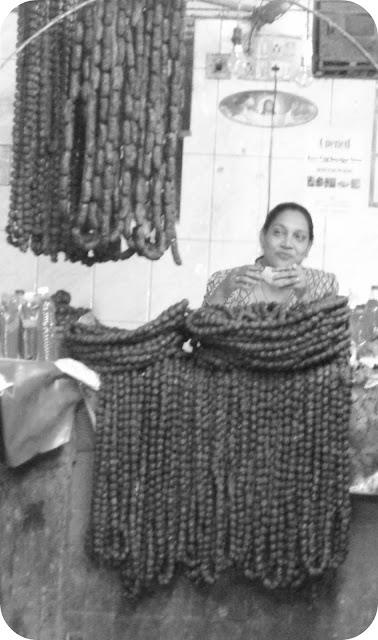 Goan sausages are a sight to behold. Festooning the market stalls like endless strings of giant-sized red beads. Uncooked they smell wonderful but Jon reckons that in reality they taste like damp dishcloths. He once ordered some in a beach shack and was so repulsed by the flavour that he offered them to a pack of starving stray dogs, who also refused to eat them. 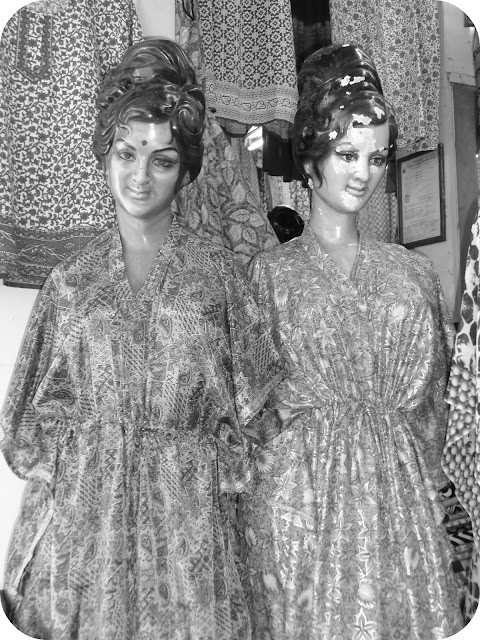 As a child I vividly remember these beautiful 1960s plaster mannequins in Walsall's sari emporiums now long gone and replaced by bland Western-looking dummies. Good to see them still in use in Margao. 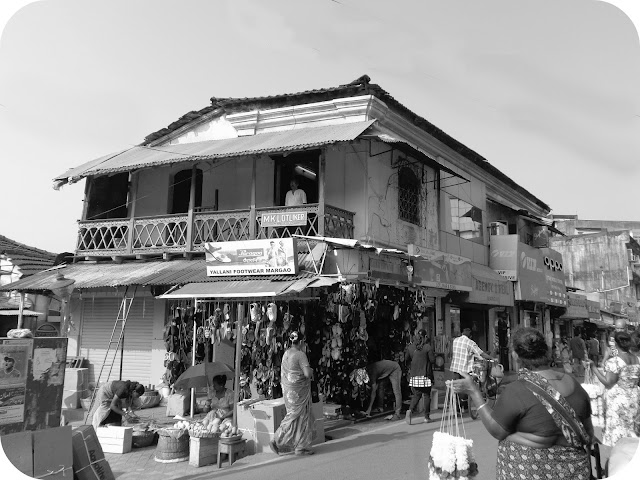 Mr MK Loteker, the advocate with an office at the top of the building, had a prime viewing spot of Margao's market. He seemed to spend most of his time sipping chai from his balcony and waving at us. 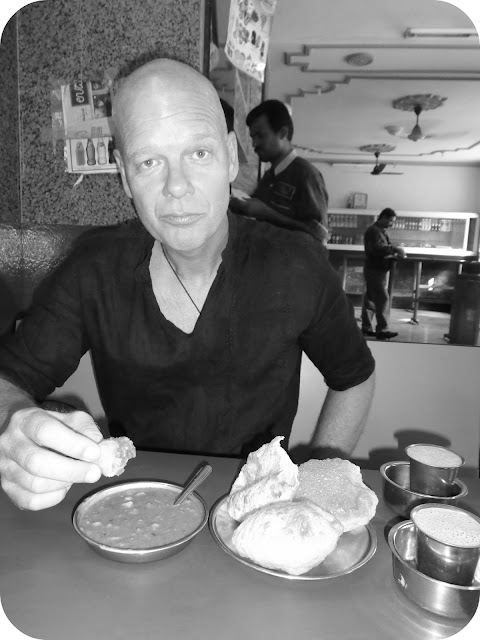 No trip to Margao is complete without the obligatory snack stop. Jon's having puri bhaji (spicy veggie stew with hollow pastry discs) with masala chai at Hotel Prasad, a friendly local canteen opposite the market temple. I don't think they had many foreign visitors as the waiters all came out to watch us eat,  anxiously giving us a hesitant thumbs up at every mouthful. 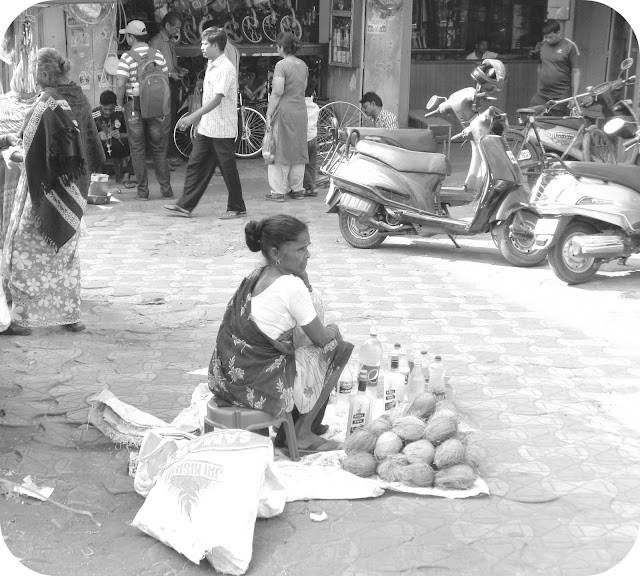 A coconut fenni seller. Not a drink we're particularly fond of but its marginally better than the oily cashew fenni, which is like drinking paraffin. 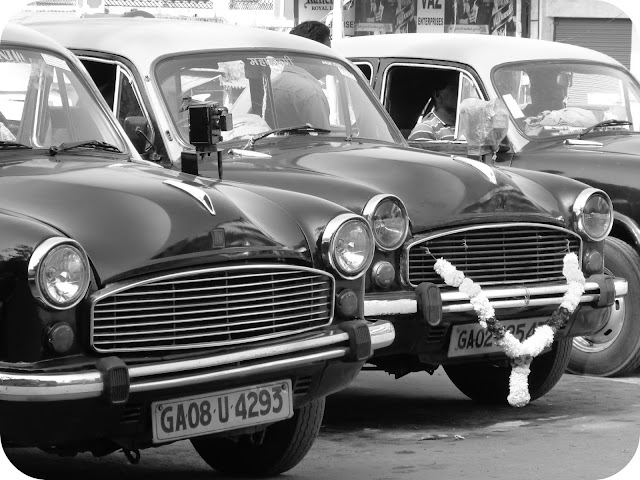 Ambassadors are still the taxis of choice, they look fantastic but, for long journeys, the suspension is hell on your back. 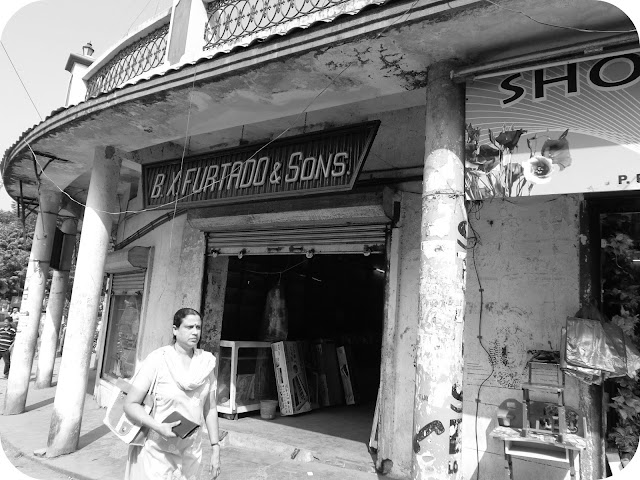 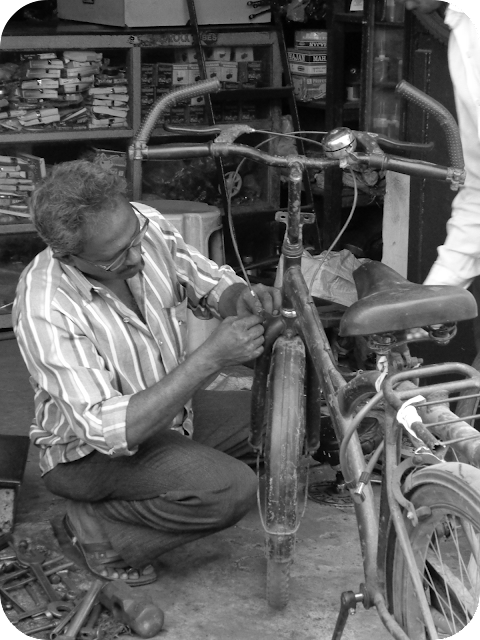 In the UK these 1950s bone shakers would have been chucked in the skip and replaced with mountain bikes years ago. In India there's entire streets of mechanics who lovingly repair them and make them roadworthy again. 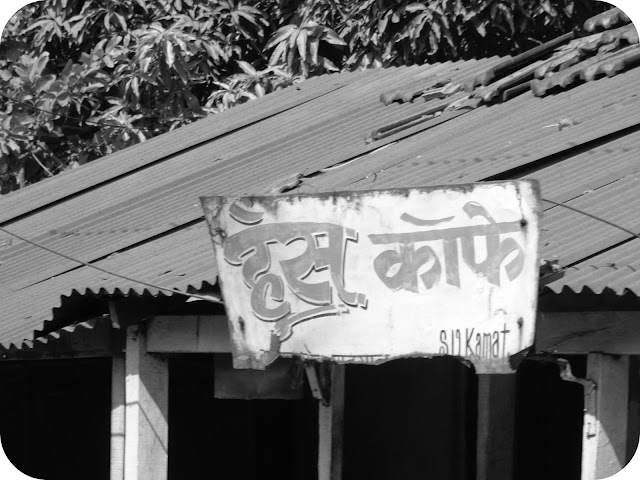 Sadly the printing press has long gone. Where does one get one's mortuary cards printed nowadays? 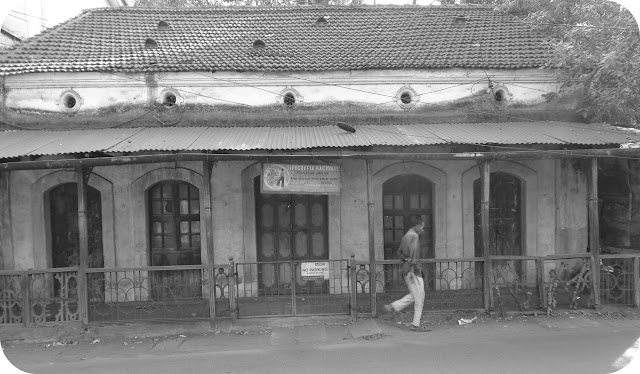 Ghaat was released in 2012 (but the poster was still up) and was filmed entirely on location in Goa. Apparently the director's wife pawned her gold to make his dream of making a film a reality. 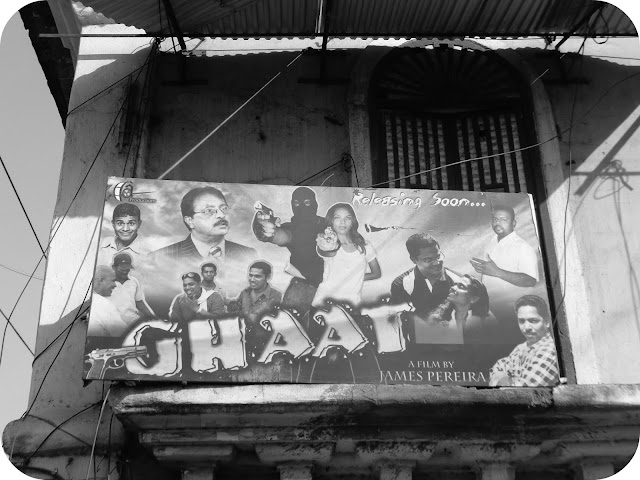 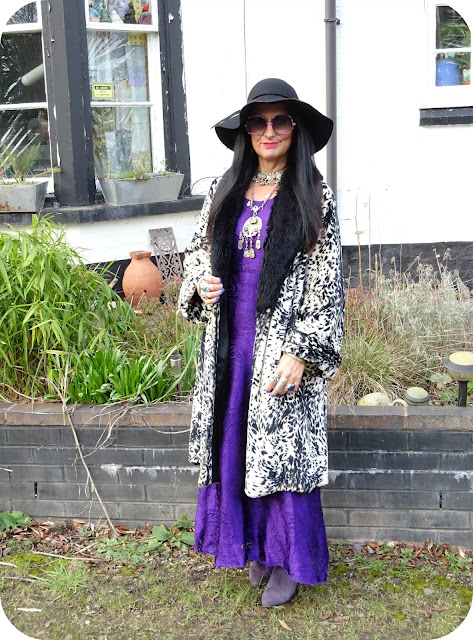 We'll be trading with the wonderful Judy's in Liverpool (see HERE) on Saturday and back on home ground with our marvelous mates in Moseley (see HERE) on Sunday. We've got some amazing newly found vintage stock, all freshly laundered and waiting to be ironed, which I'd better go and get on with.

Linking to Patti and the gang for Visible Monday and Judith for March's Hat Attack.