Vests Ahoy and Ready To Rummage 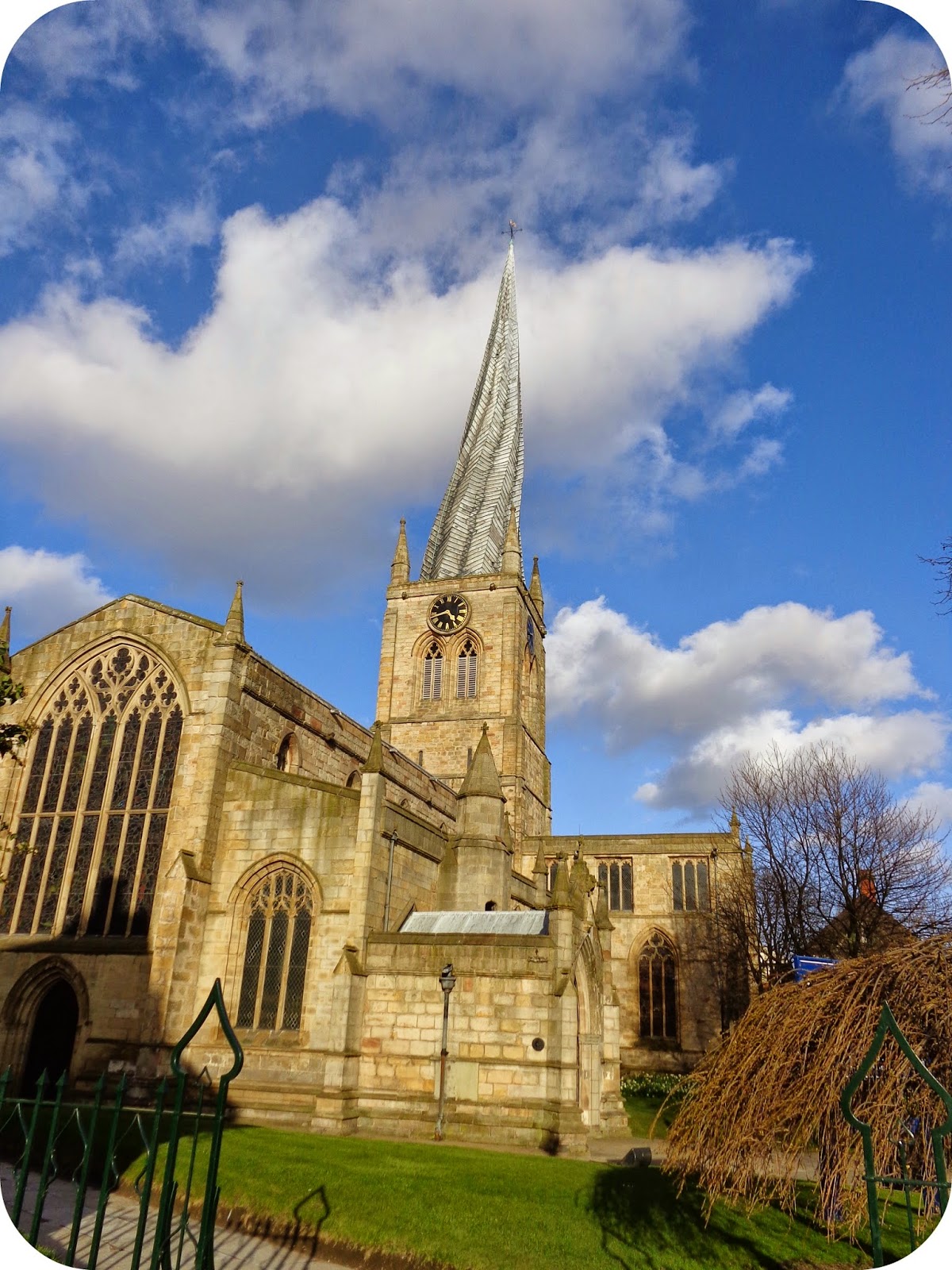 So Curtise instructed when she suggested a trip up to Chesterfield. I'm glad we heeded her advice, it was freezing! 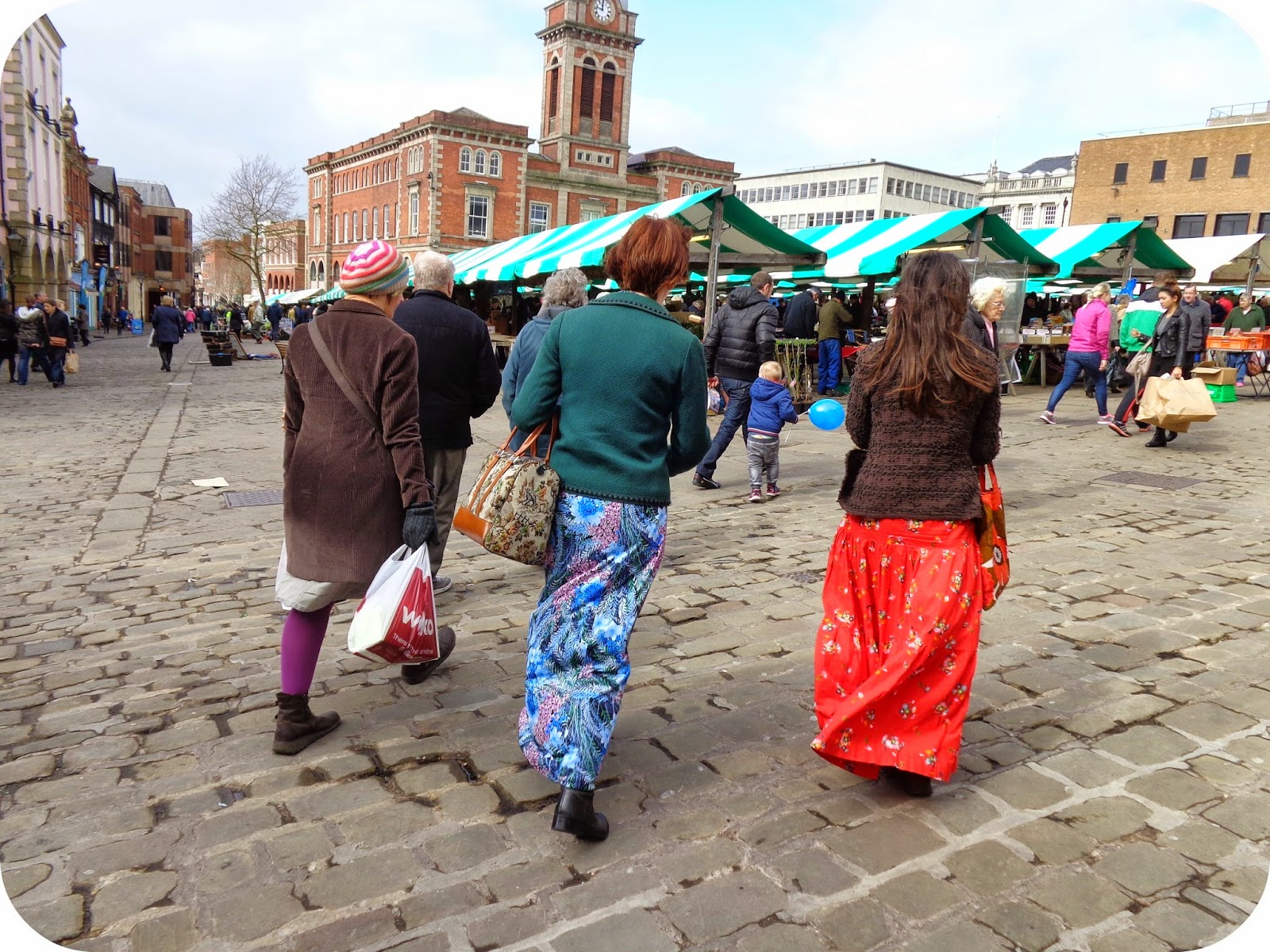 A restorative coffee and a gossip after meeting up at the train station, Tania & I were introduced to Curtise's lovely camera-shy mate, Joanne and off we went for a wander around the legendary Thursday Flea. 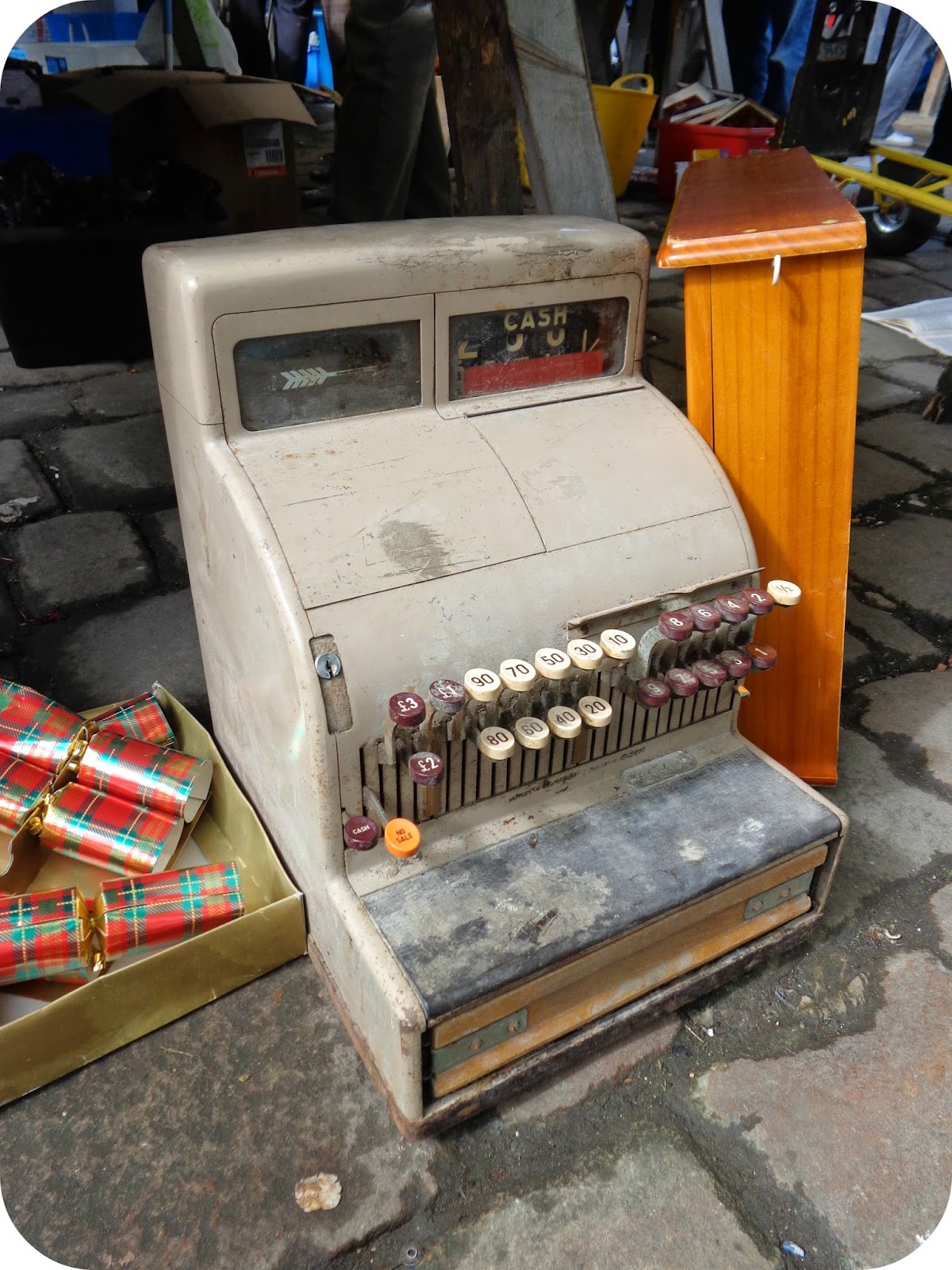 What a great prop this would be for Kinky Melon's Pop-up shop. Not sure that Jon's back would agree. 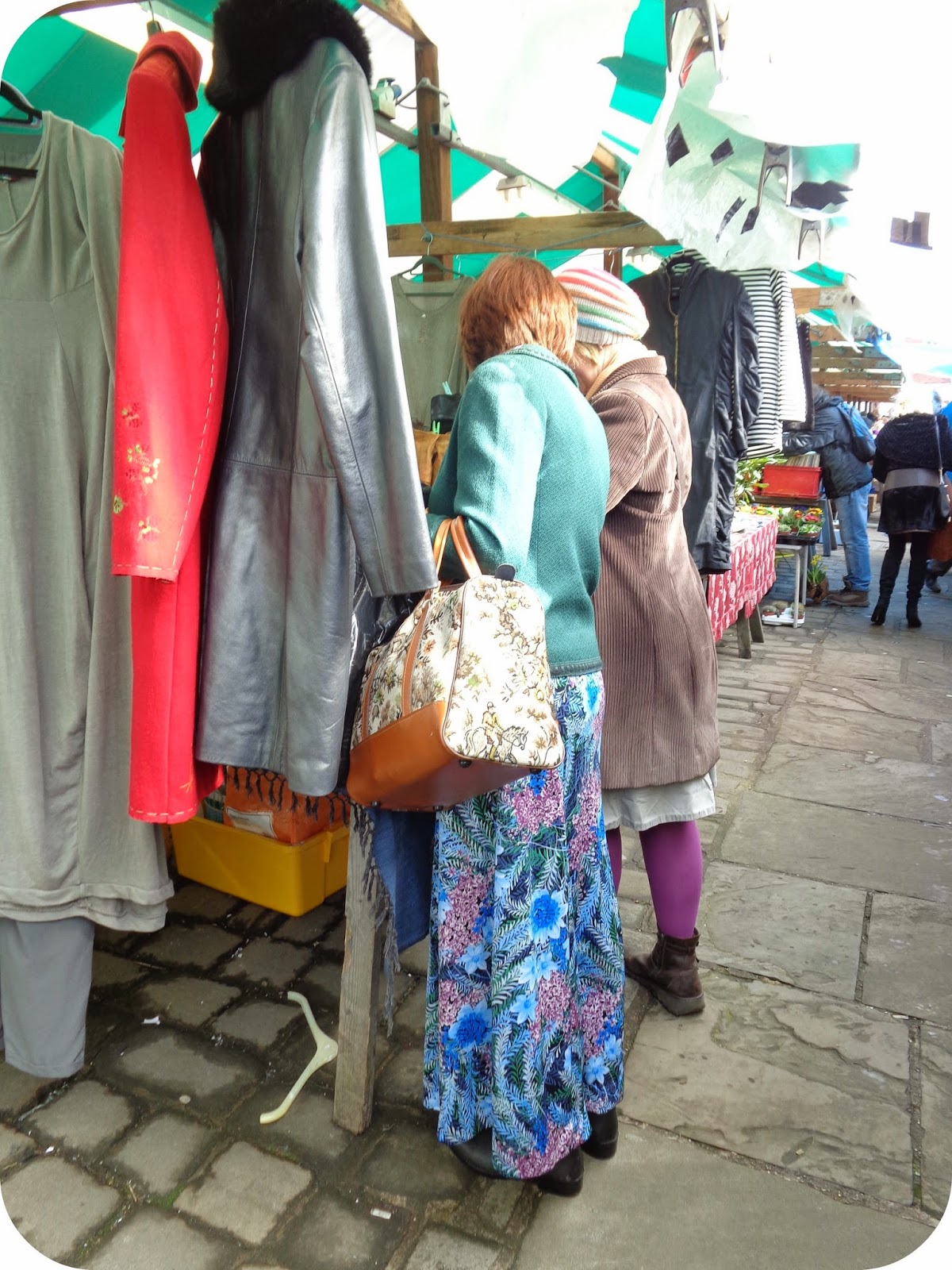 Curtise and Joanne rummaged through a beautifully curated stall of grown-up clothes heavy on the posh labels and muted colours. 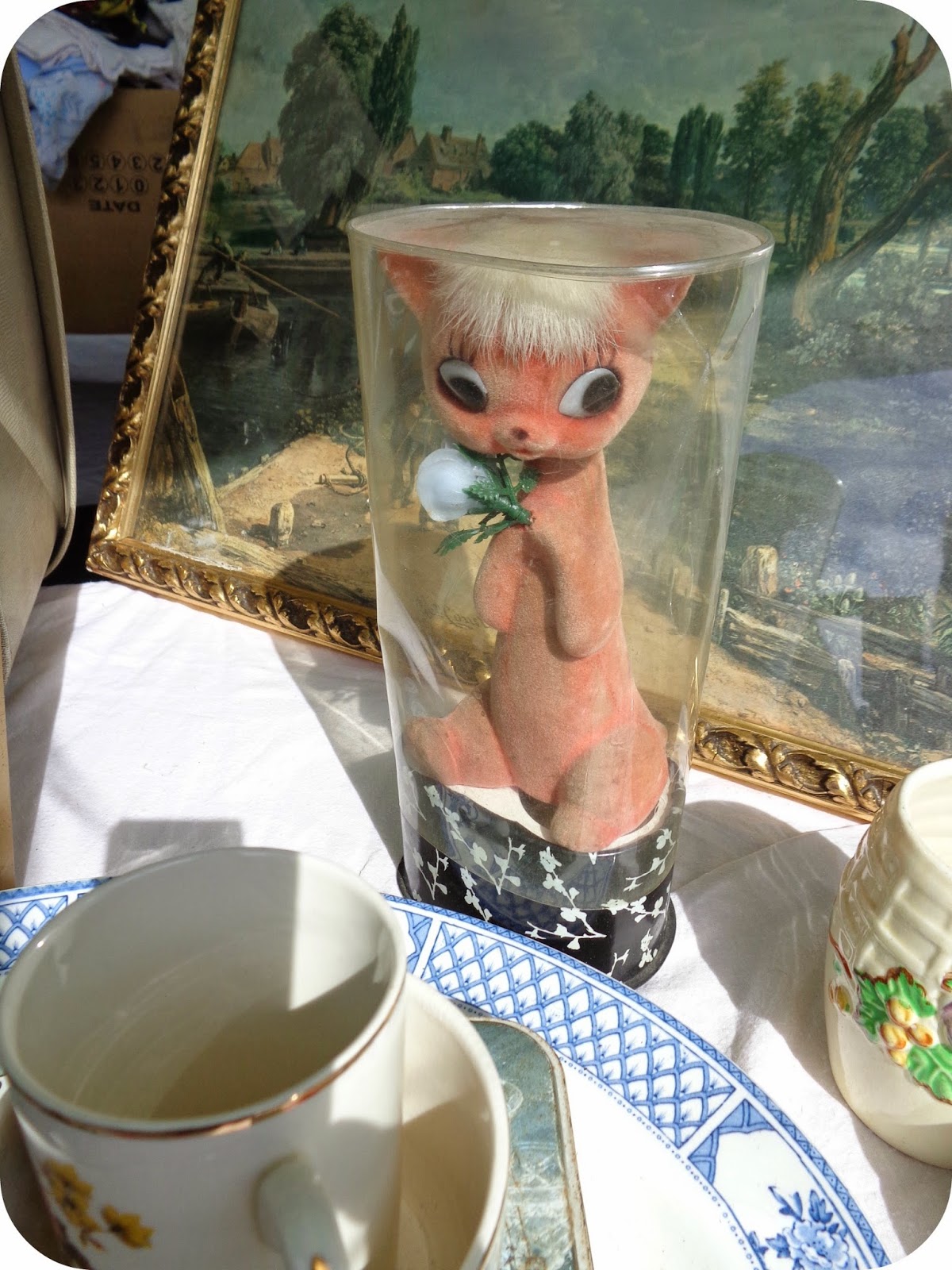 I rather fancied this ridiculous cat-garoo for my dressing table. 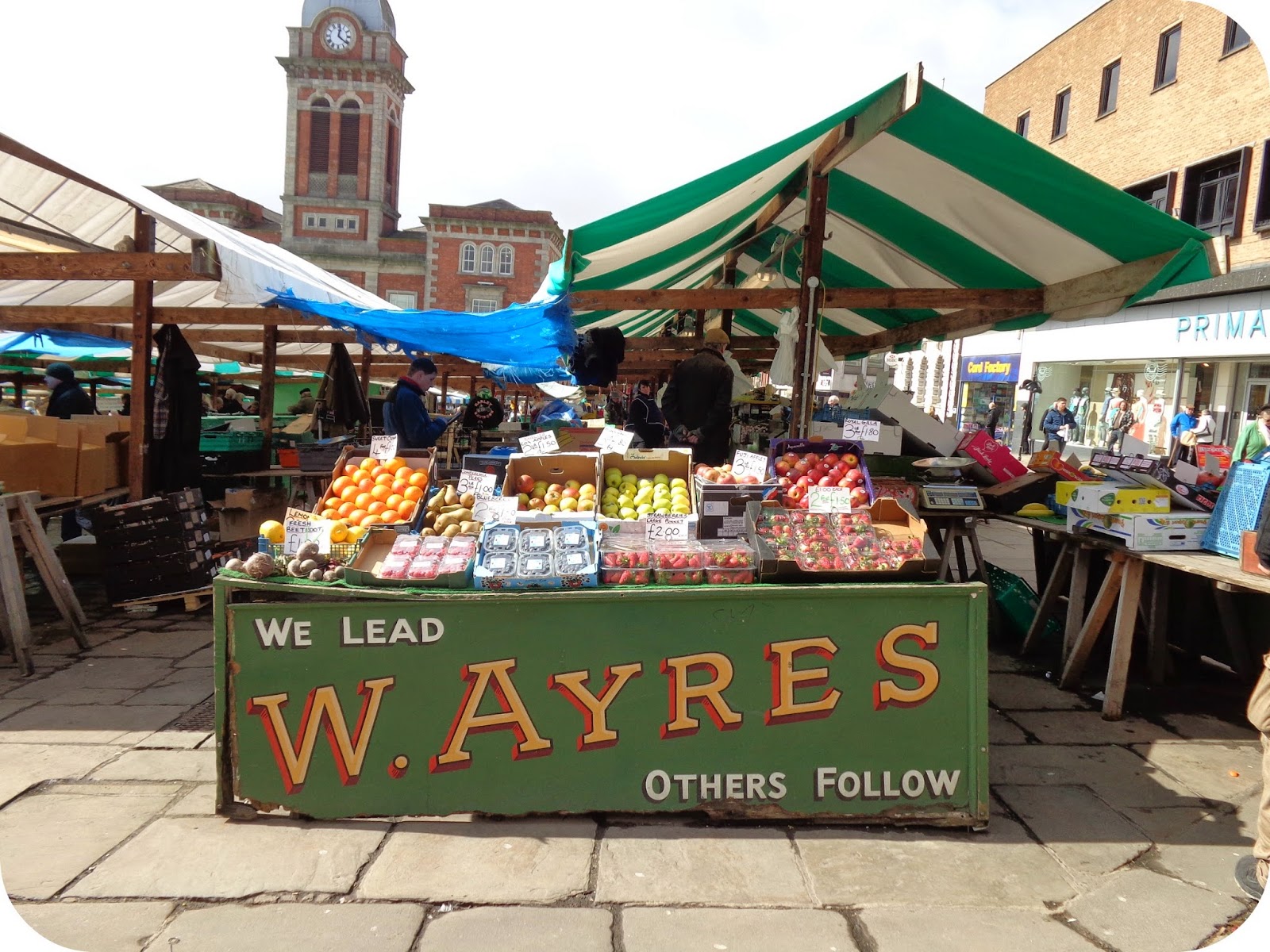 The fruit and veg was cheap and prettily presented. 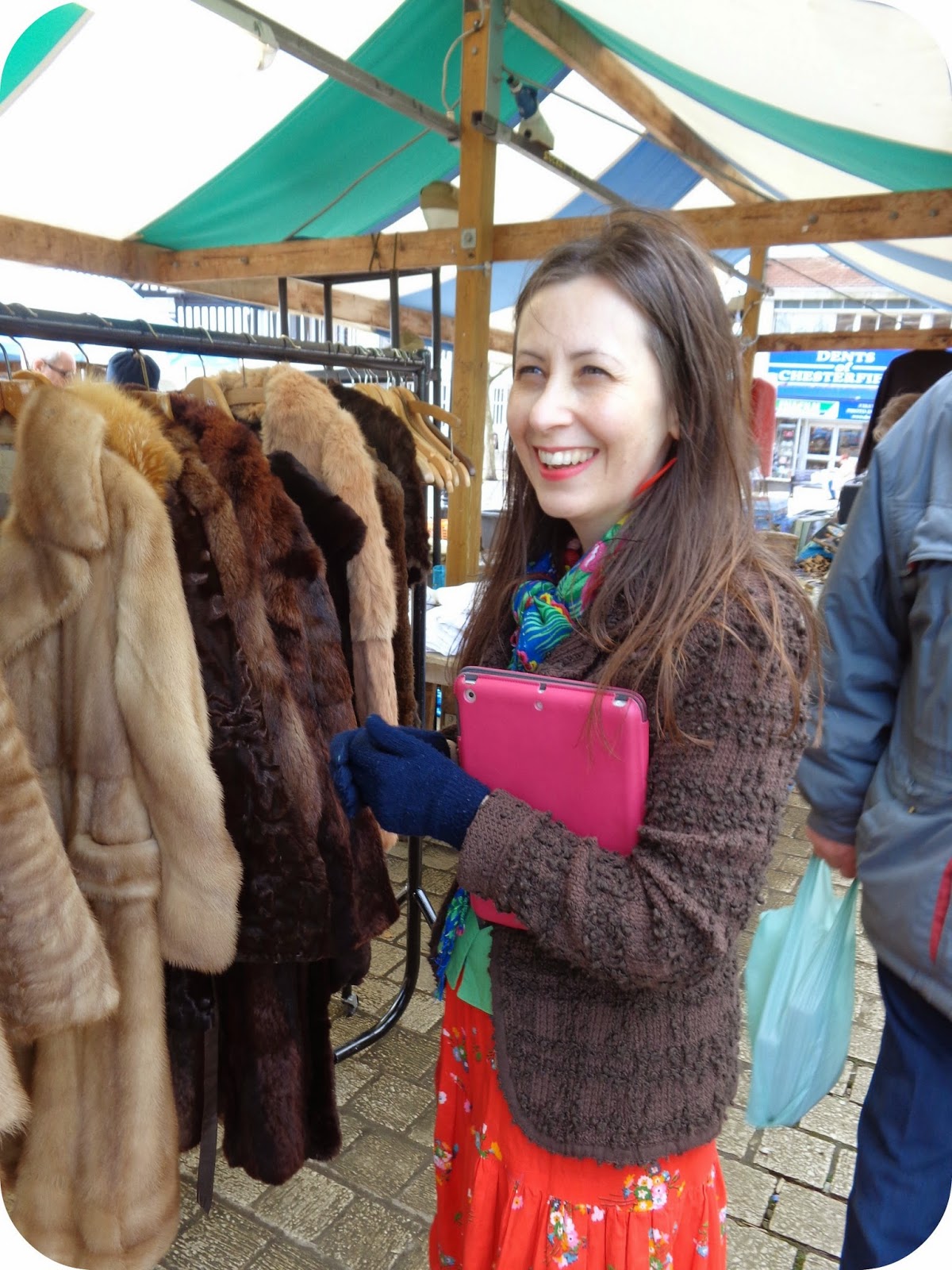 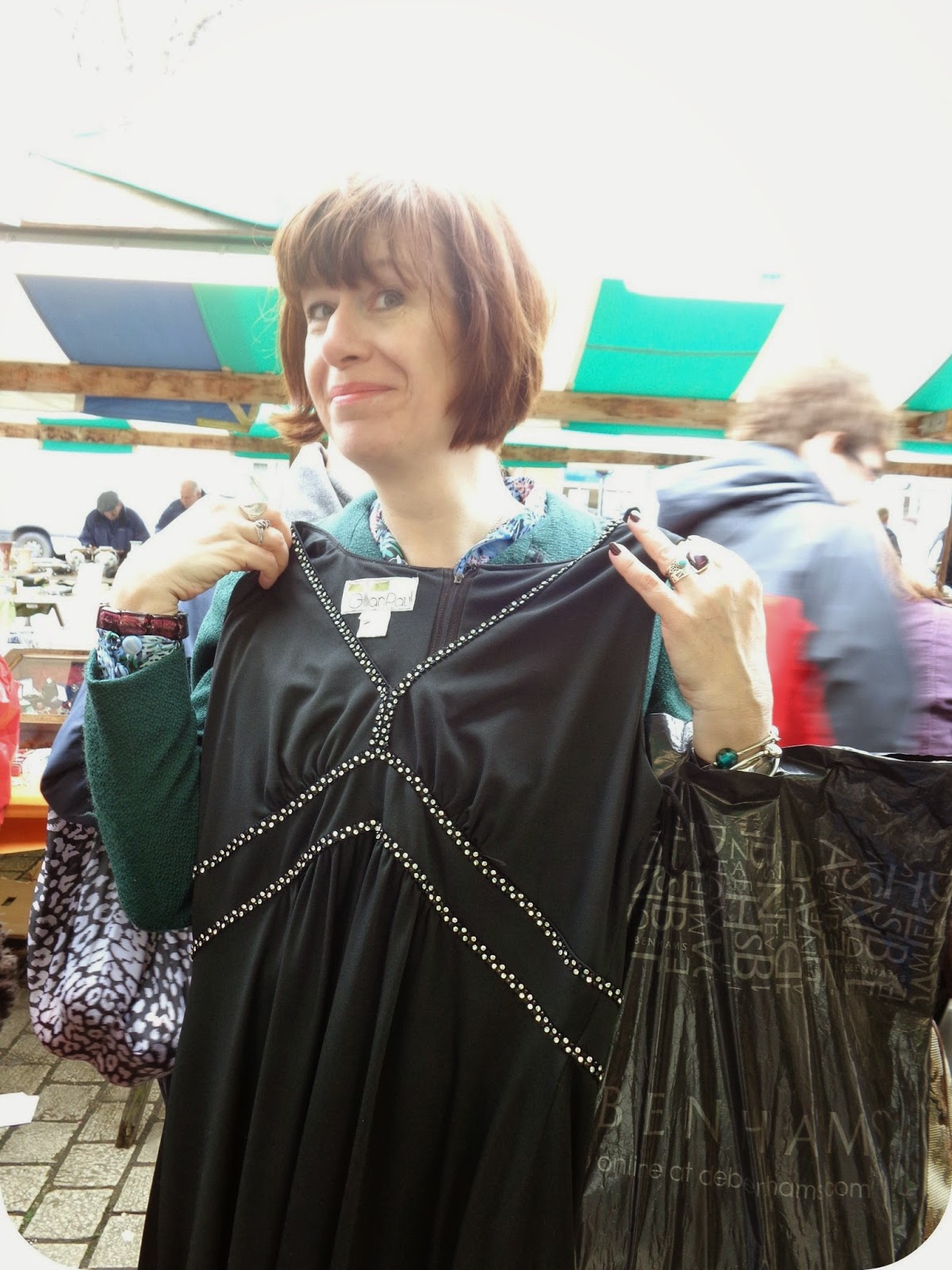 Do you ladies like the 1970s? Asked one stall holder, 'Cos I've got a bagful of dresses in the van. What on earth gave you that impression? We replied. Curtise look a fancy to this Gillian Paul rhinestone trimmed maxi but we decided it was too big and rather tricky to adjust so let it be. 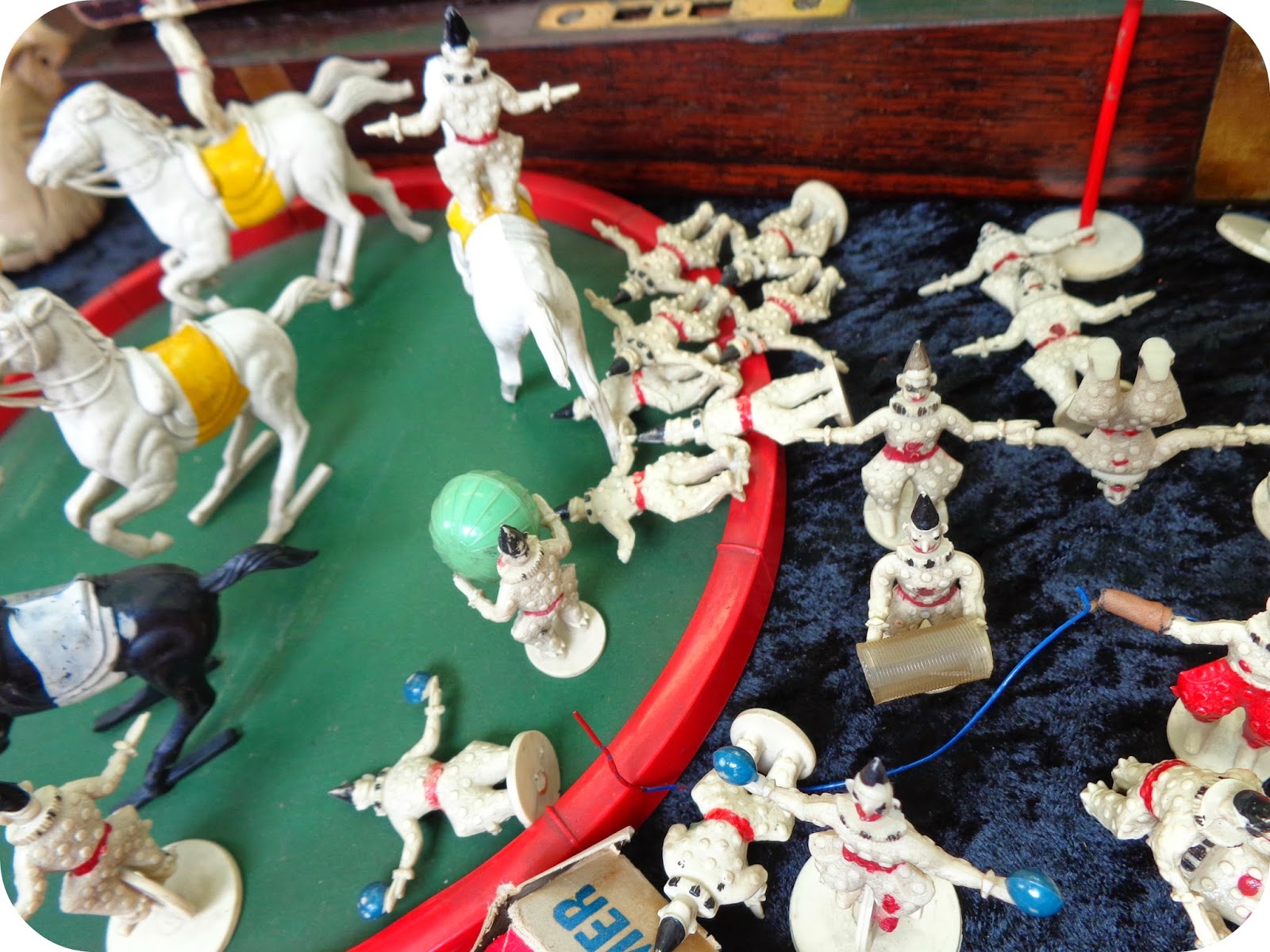 We were captivated by this early 1950s circus game. 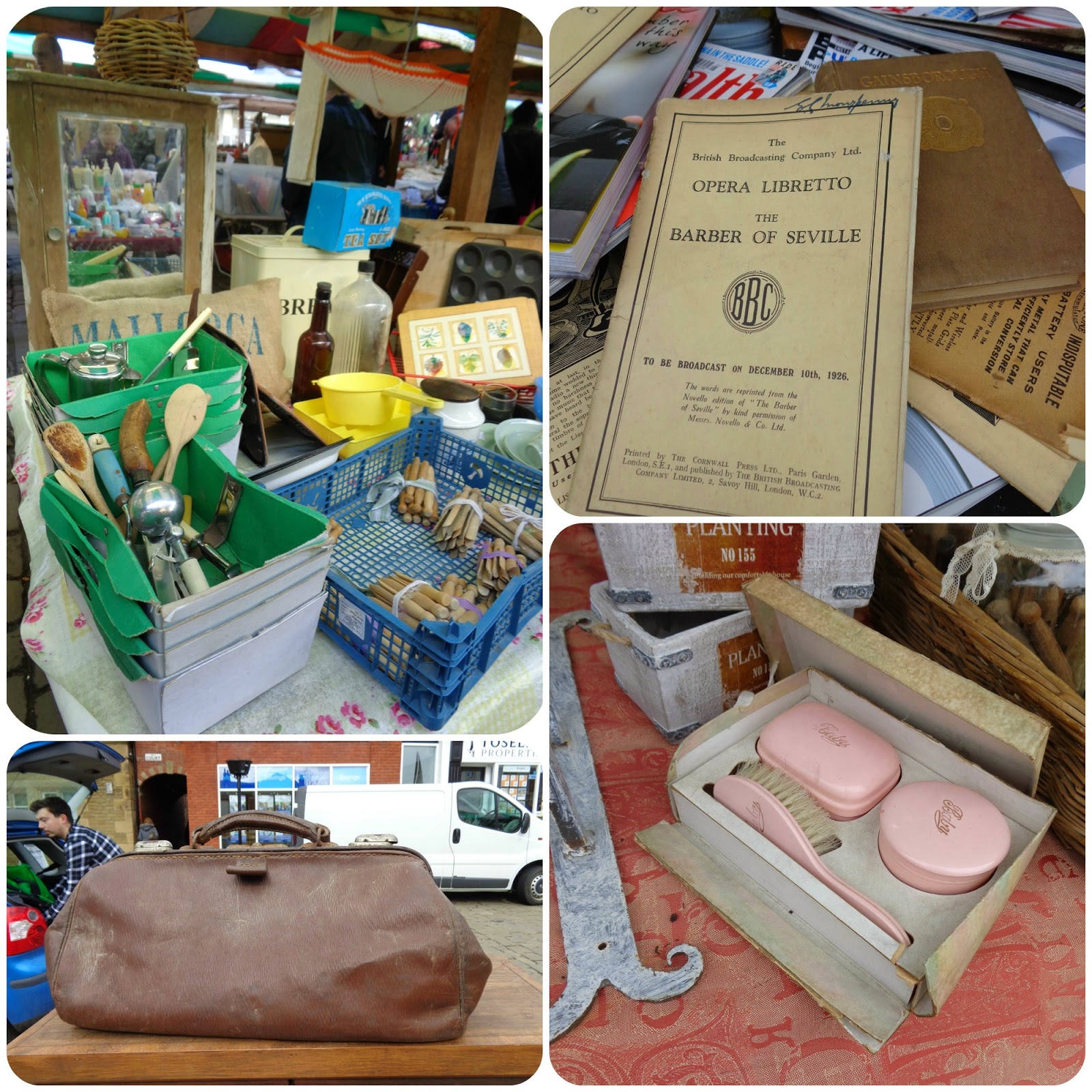 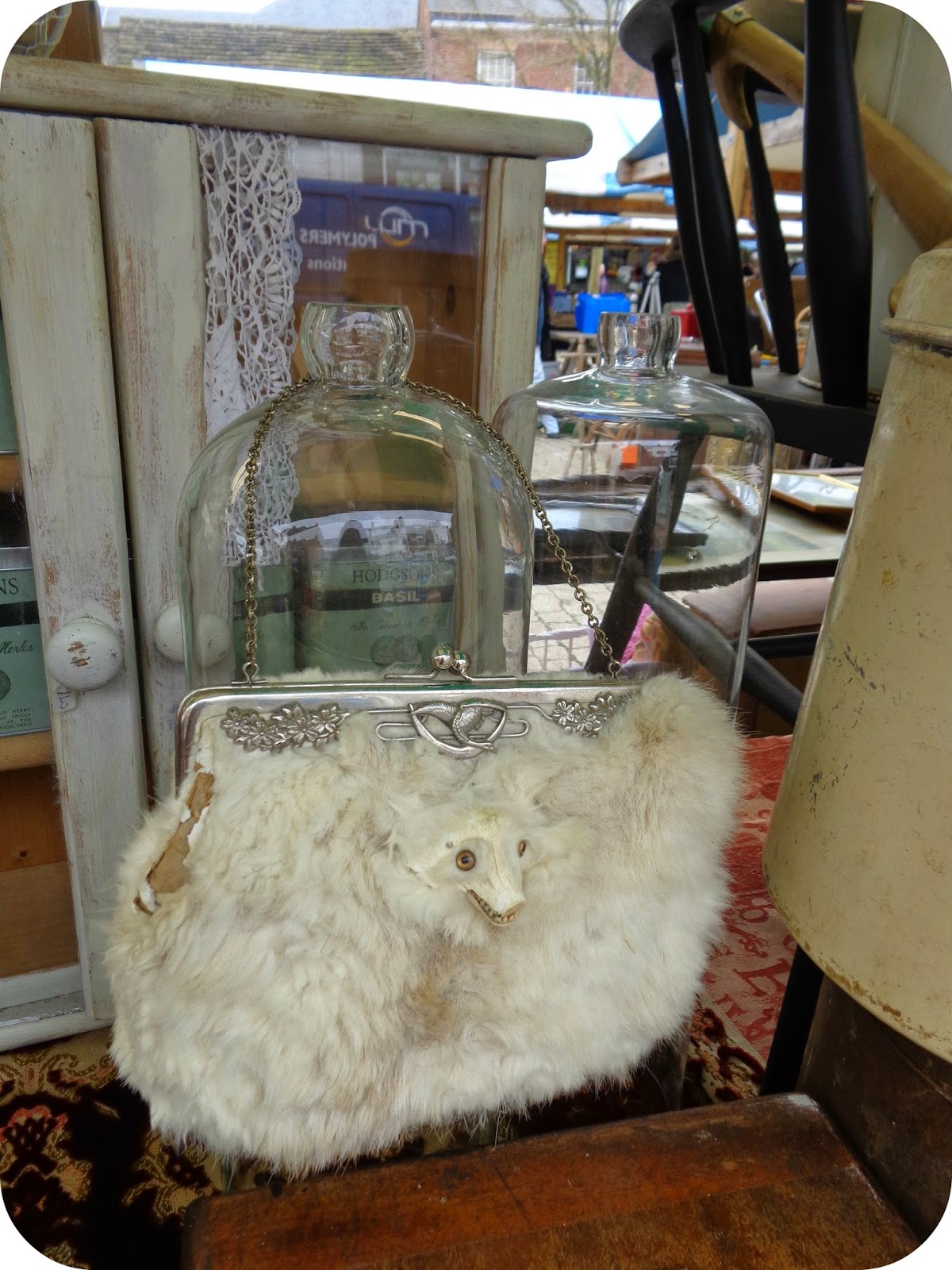 You'll have this this freakish thing on Curtise's blog from her last trip to Chesterfield. No surprise it hadn't sold. What the hell is it? 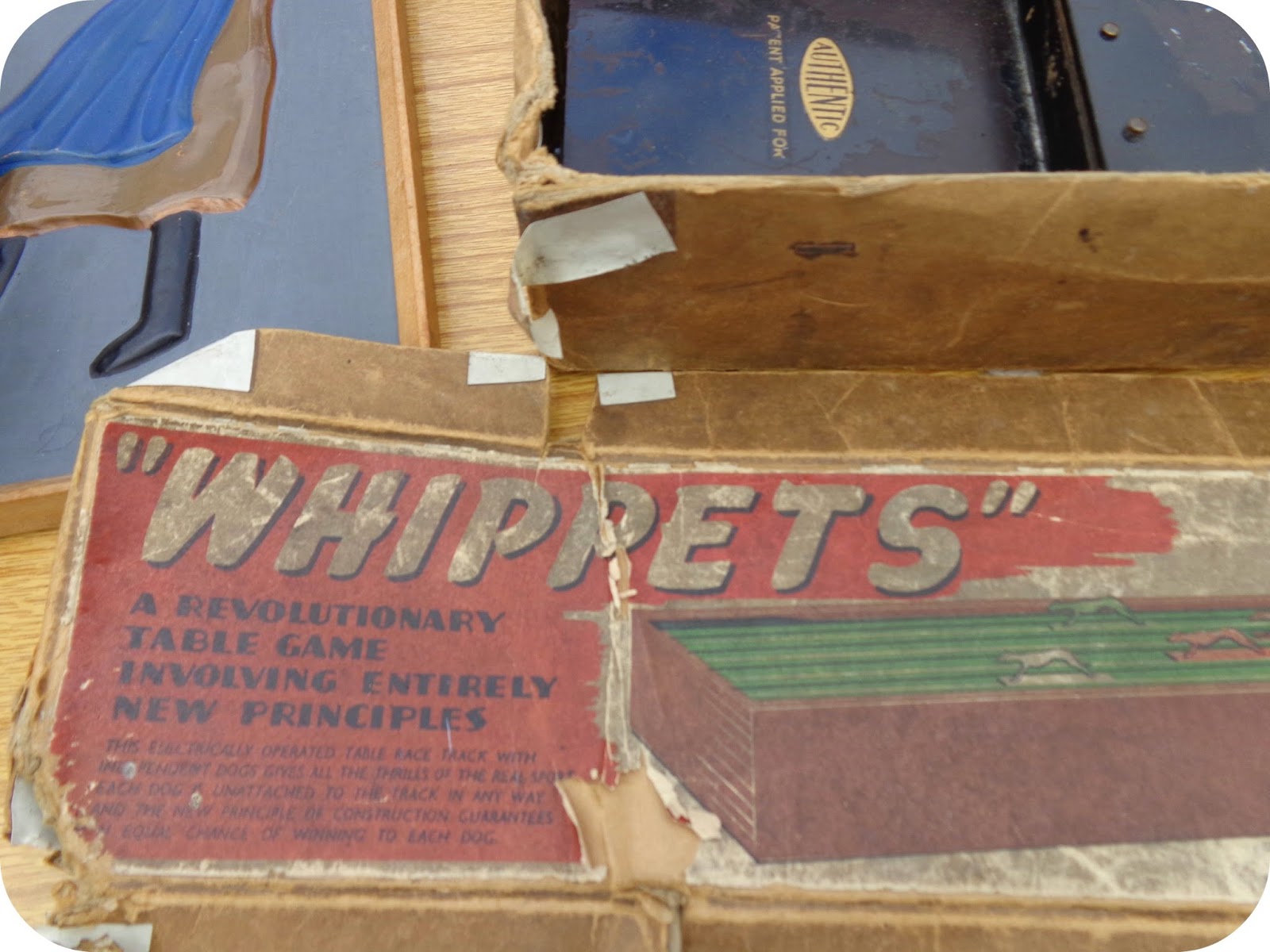 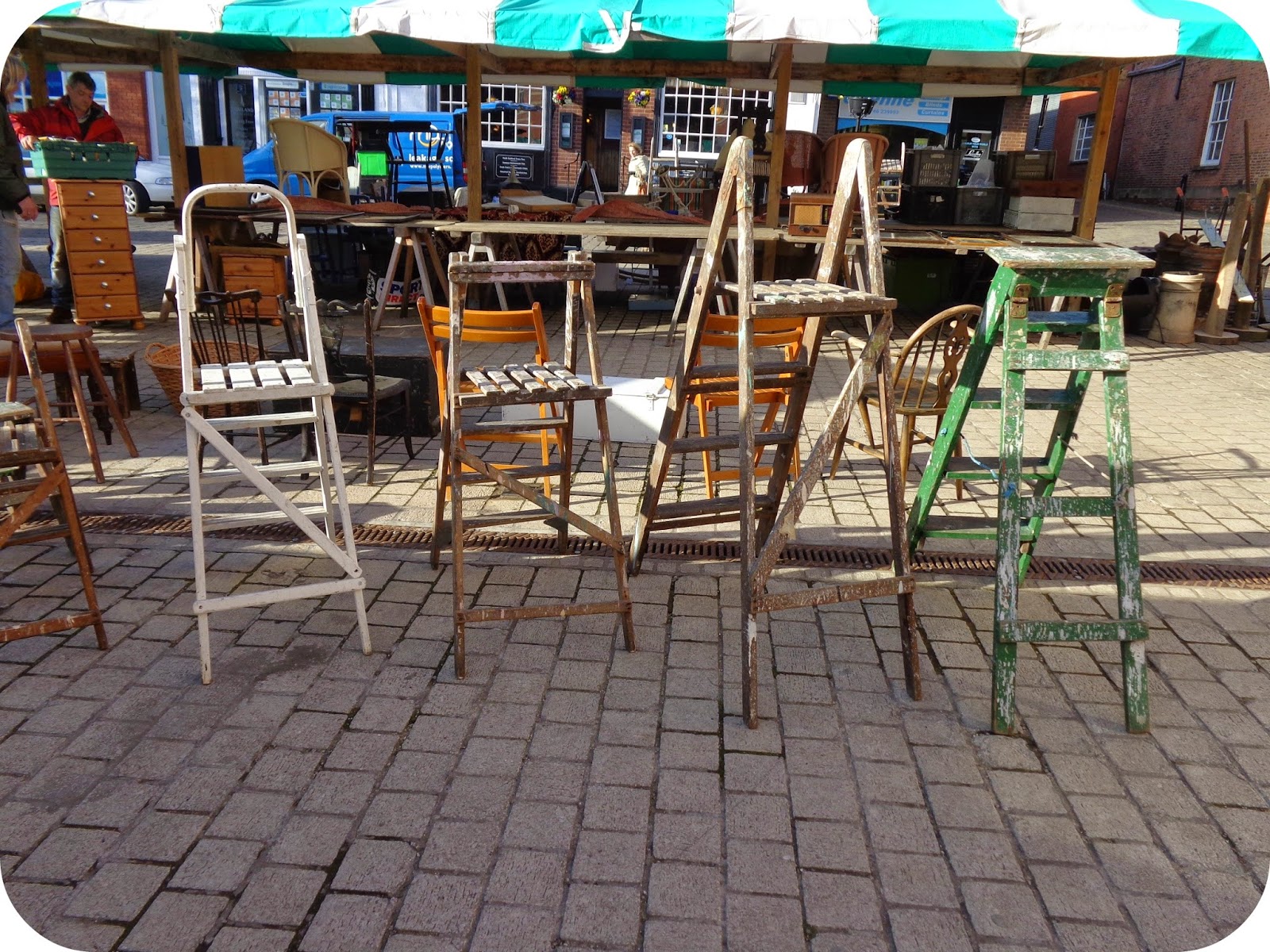 I was almost tempted to buy an old stepladder (even though I've already got several) just to carry it home on the train. 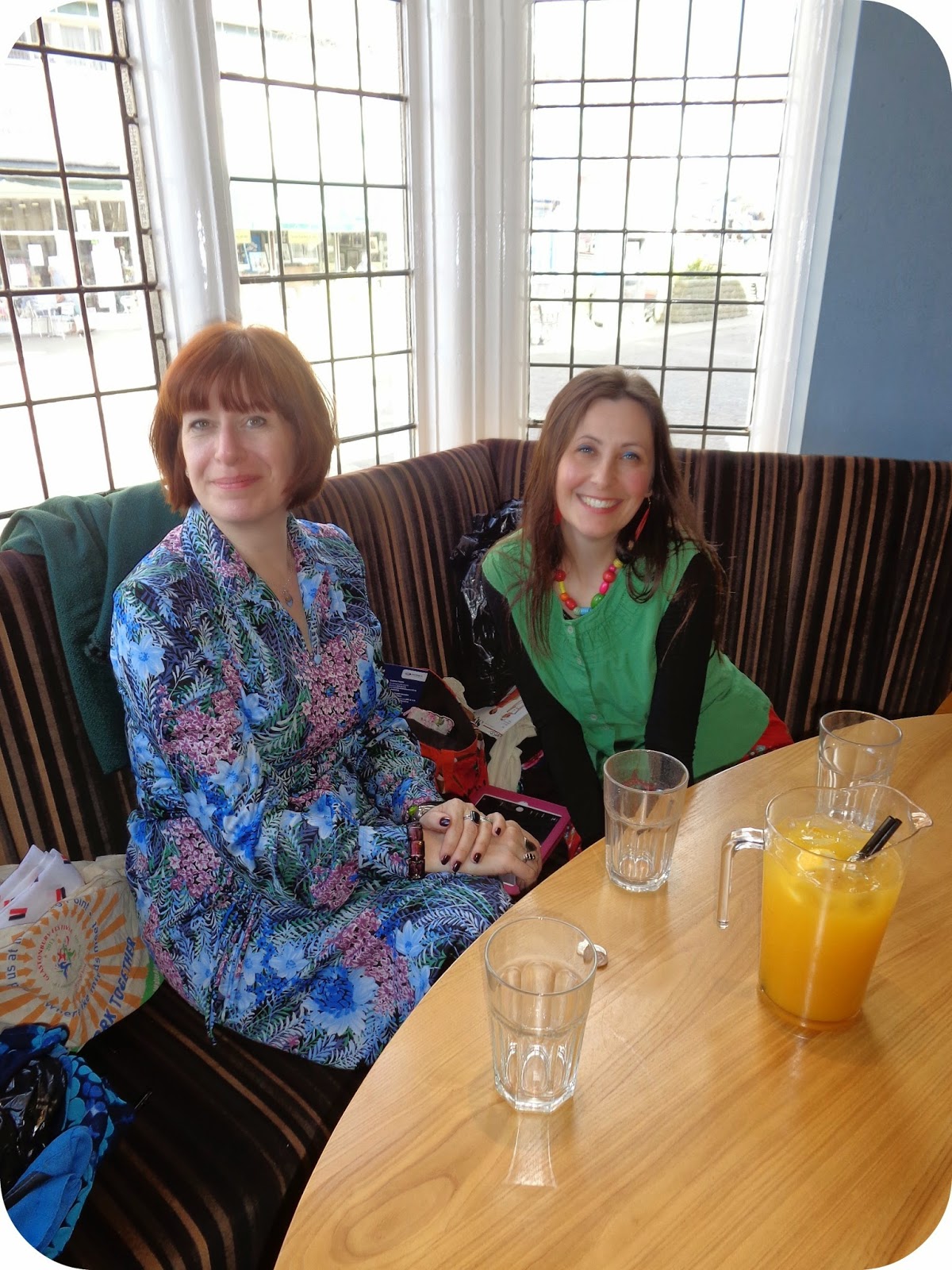 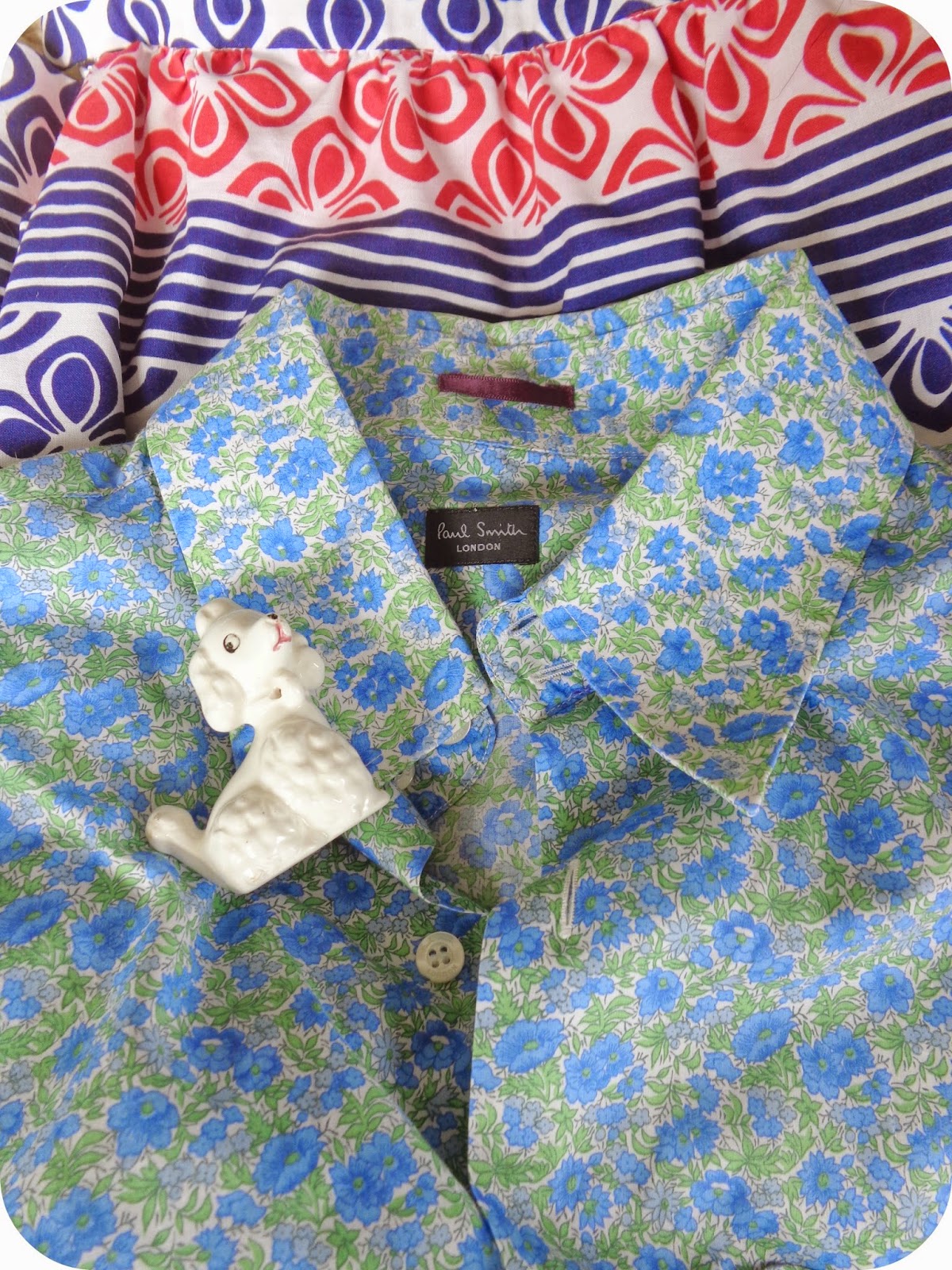 A Paul Smith shirt for Jon, a perplexed poodle and a fabulously groovy St Michael maxi for me...cheers, Curtise! 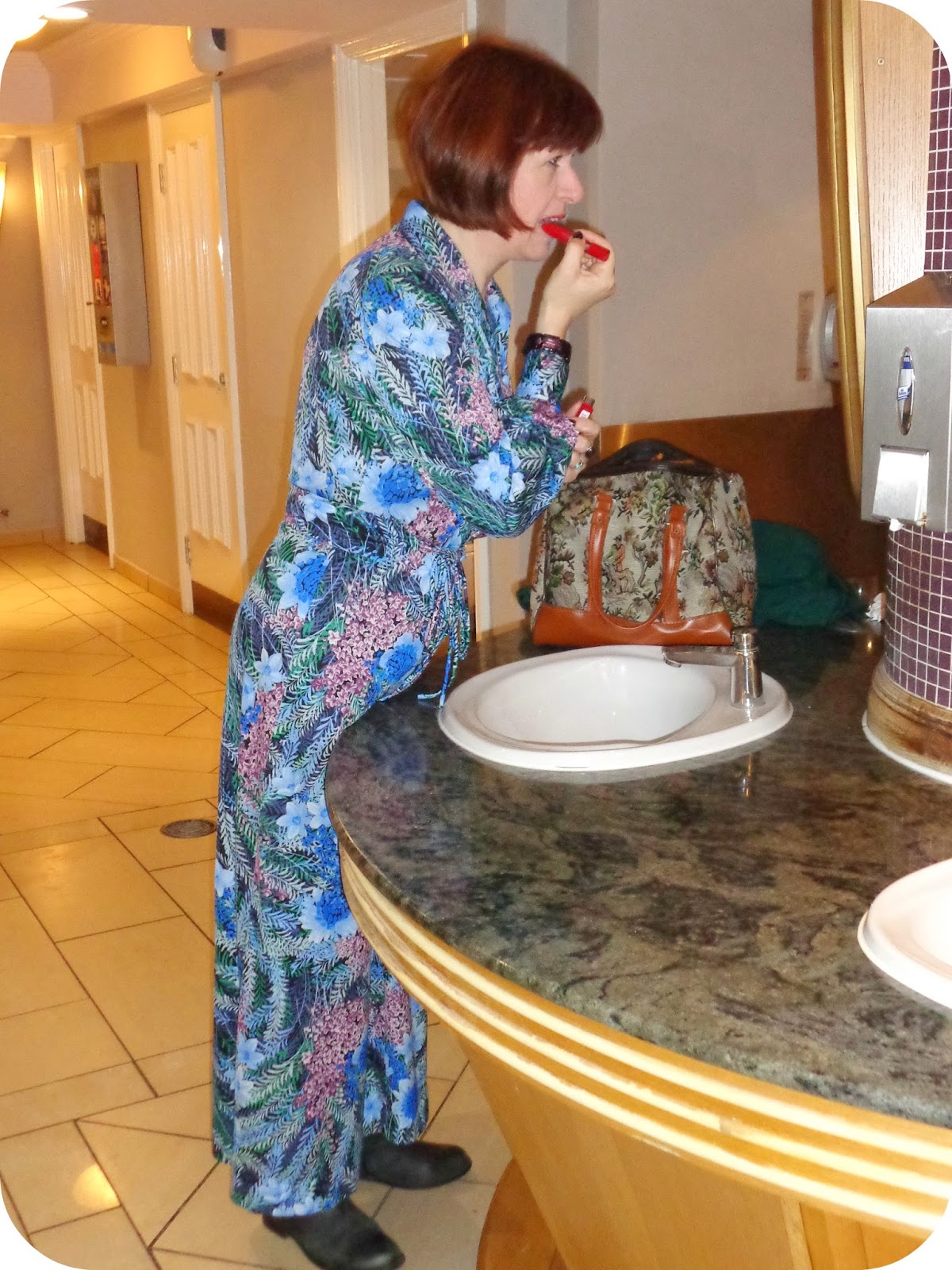 A quick touch-up in the fancy lavs. 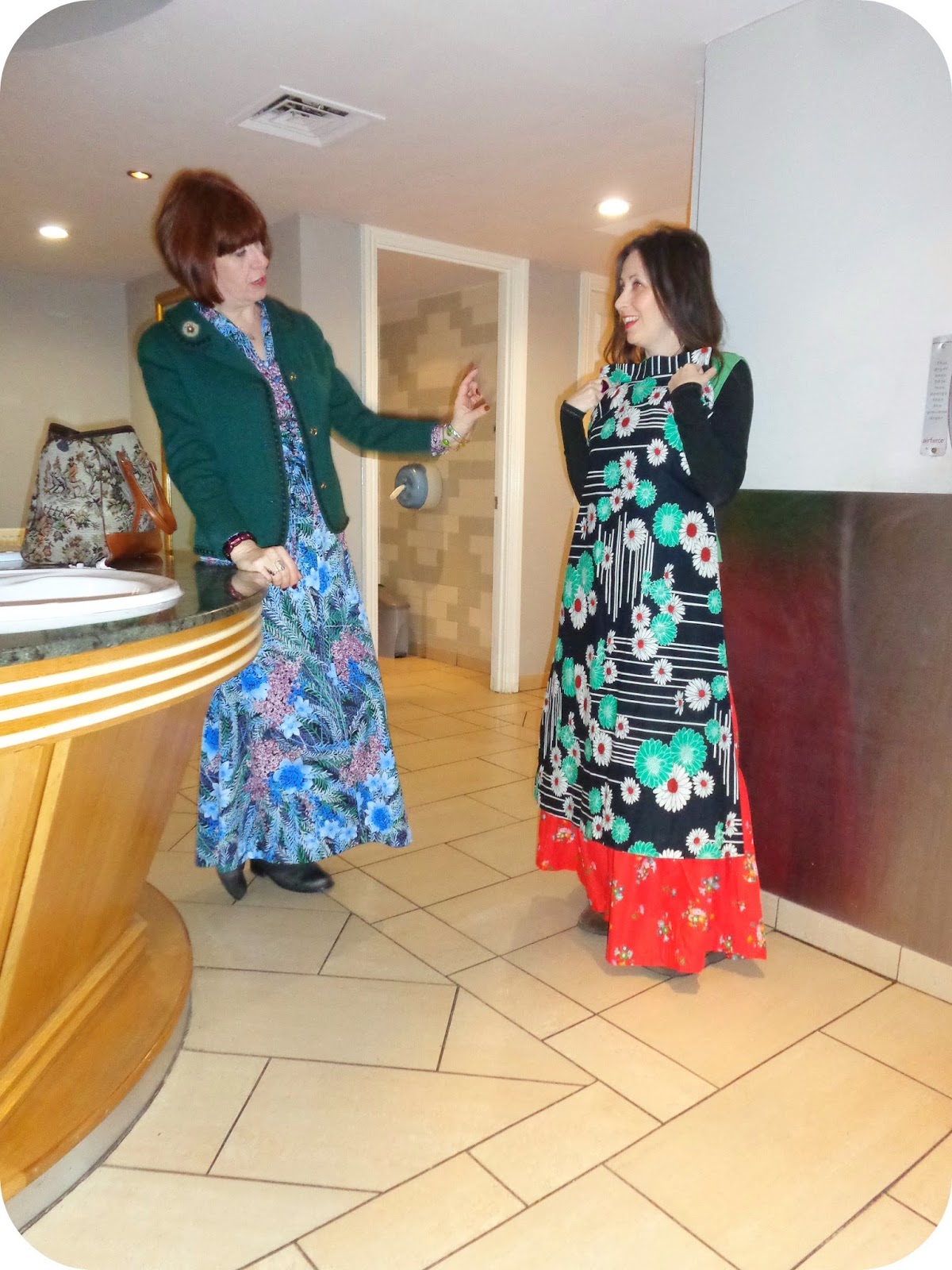 Curtise gave both Tania and I identical Horrockses 1970s teeny tiny maxi skirts. We wriggled into them in drunken hilarity, unable to do up the waistbands. Tania decided to turn hers into a sun dress but was a bit disturbed by where the pockets would be positioned. Curtise decreed that boob flaps were the in-thing. 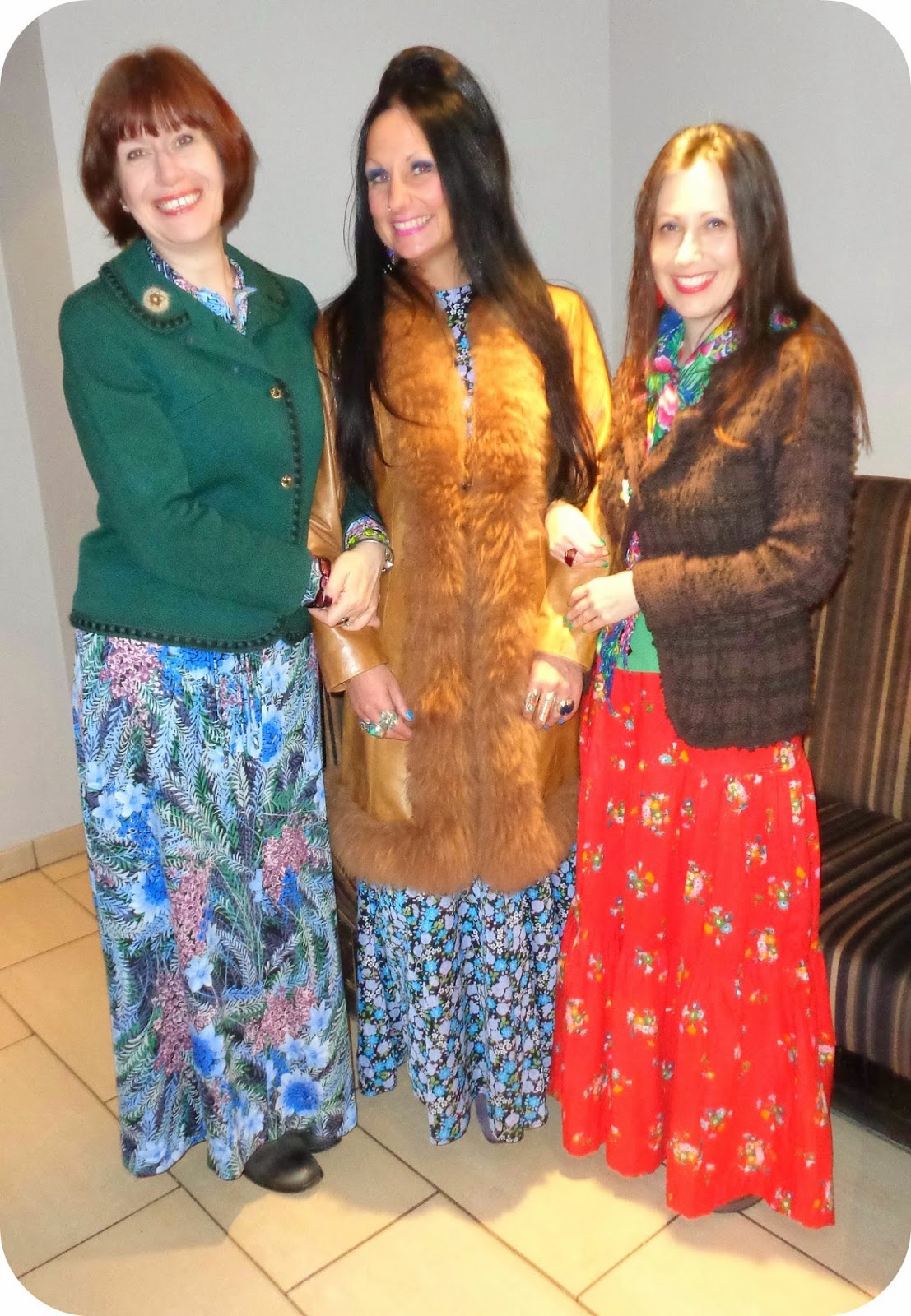 A kind stranger offered to take a group photo in the toilet. Oh the glamour!
Check out Curtise's account of the day HERE and Tania's HERE. 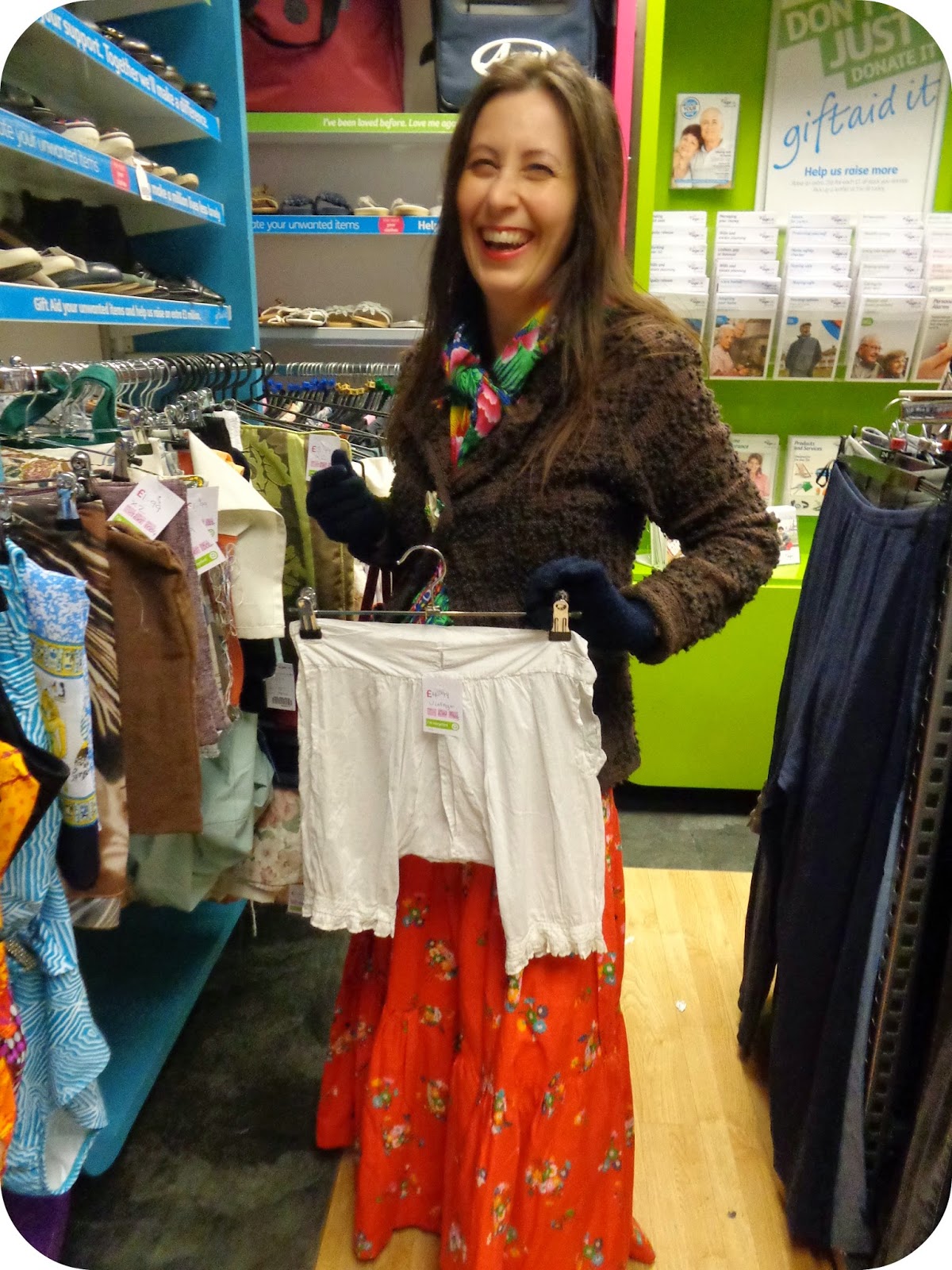 After spending most of the day in the pub we had a quick dash round the chazzas before catching our respective trains and buses home. As I'm working a festival with Tom Jones headlining in a couple of months time I'm almost regretting not buying these vintage bloomers to chuck at him. 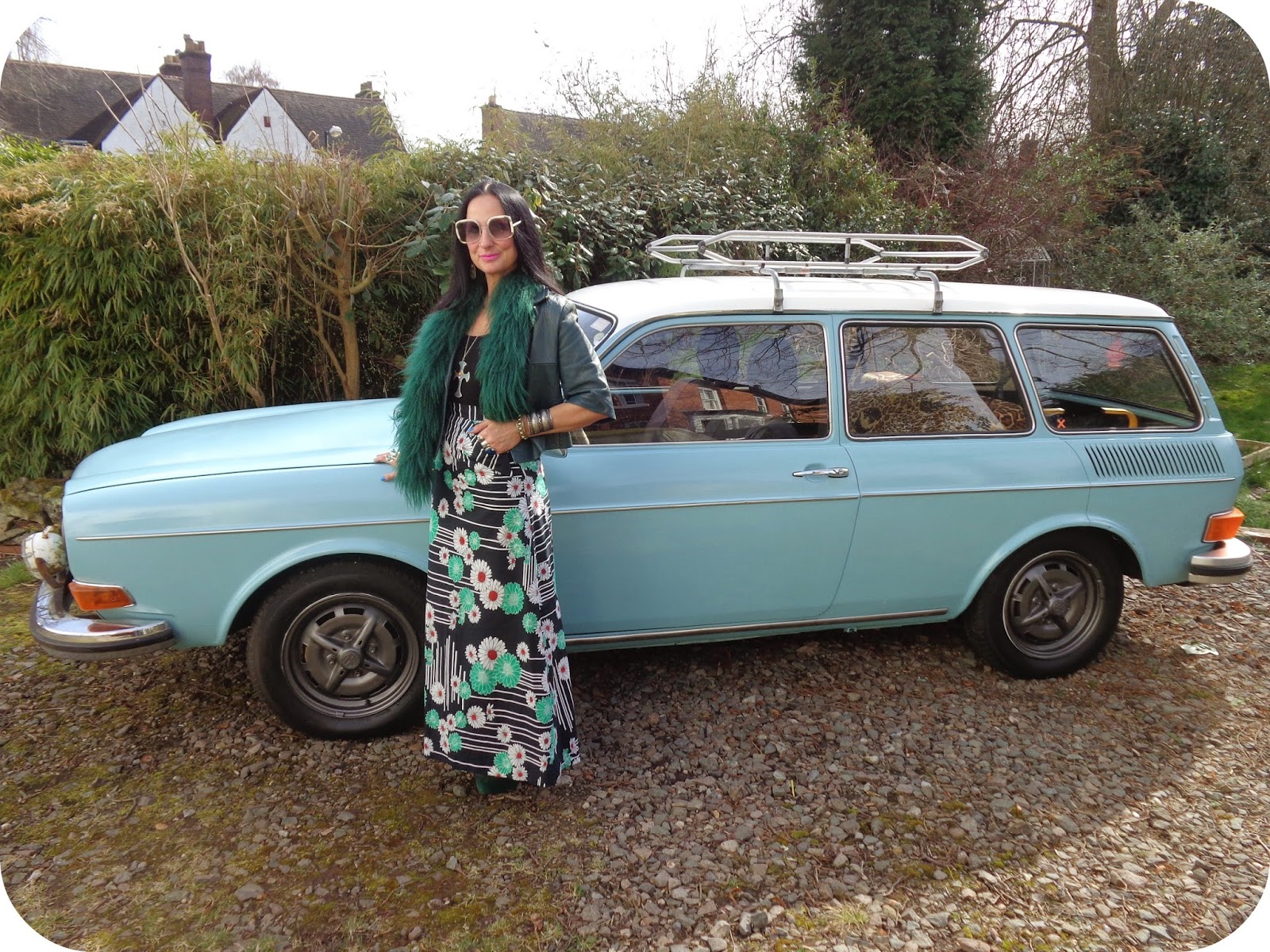 What a difference a day makes! I can get into the Horrockses maxi this morning! Just the job for a run out to Lidl in Ebbie.

What a fab day out. The only money I spent was in the pub (you can't take the Black Country out of this girl) and I still came back with goodies. Can't wait to hang out with more of my blog mates. 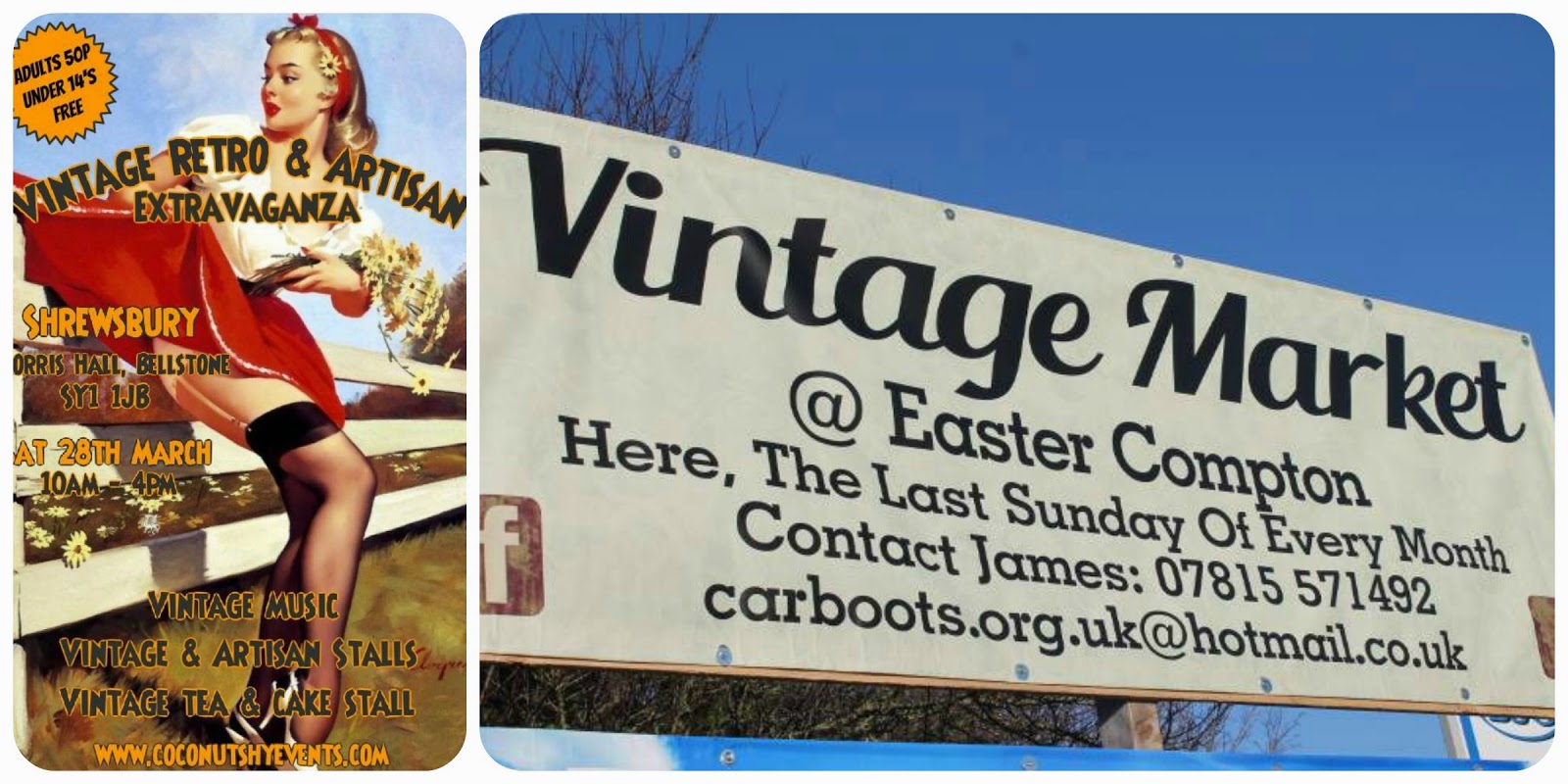 News Update Saturday's fair in Nottingham has sadly been cancelled but Kinky will be trading at Shrewsbury on Saturday and Easter Compton in Bristol on Sunday. Pop along for some authentic vintage finery, reasonably priced, pre-laundered and chosen with love!