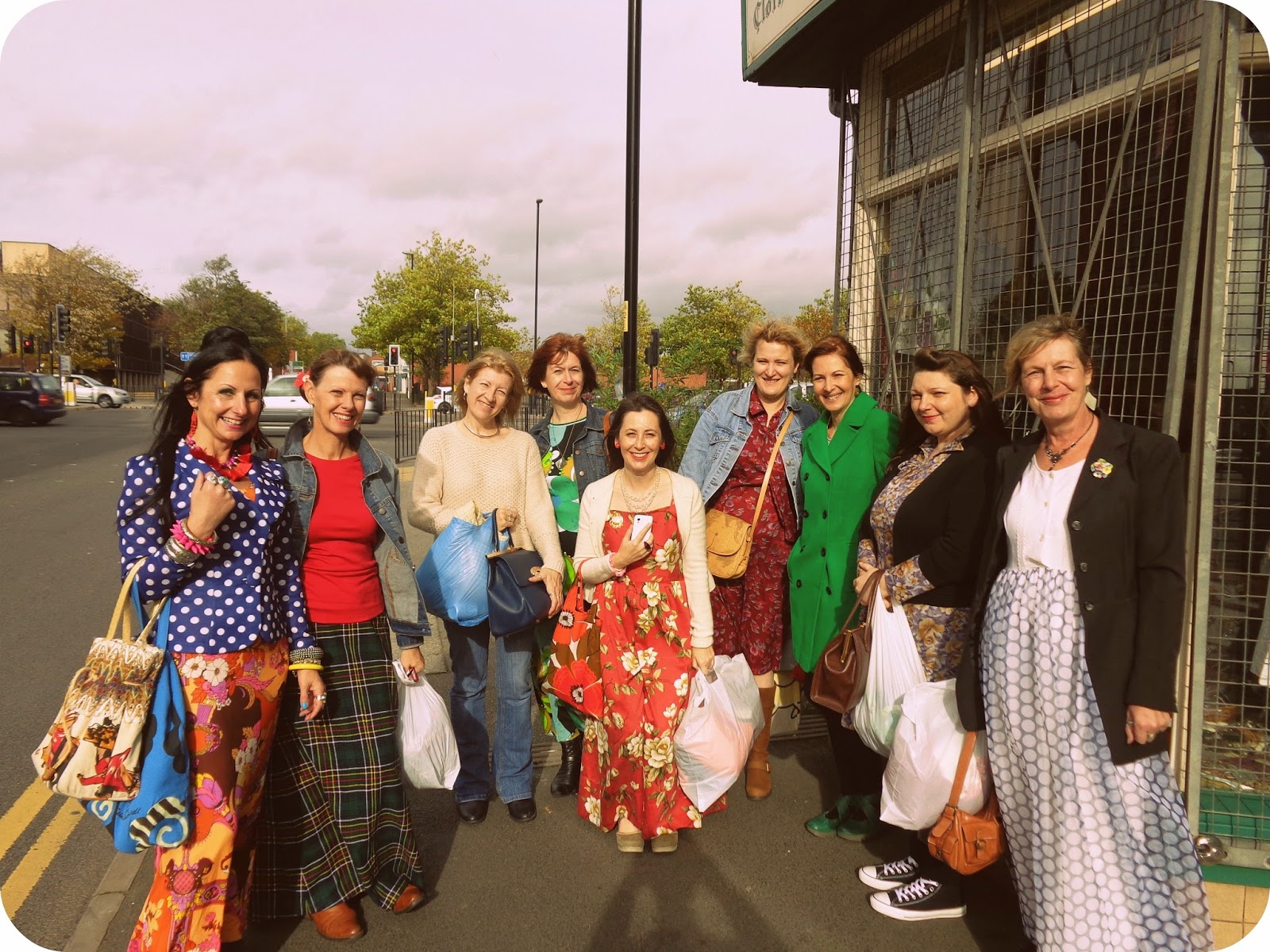 Its been a while since we last had a girls' day out so I was beyond excited to host a get together in Walsall this weekend.

After picking up Fiona from her hotel and meeting Emma, Annie, Curtise & Lyndsey at the train station, we staged an invasion of Costa coffee, throwing the waiting staff into confusion. As soon as Gisela, Tania & her friend Vanessa arrived we marched up to Second To None where June was ready and waiting (I'd tipped her off last week). 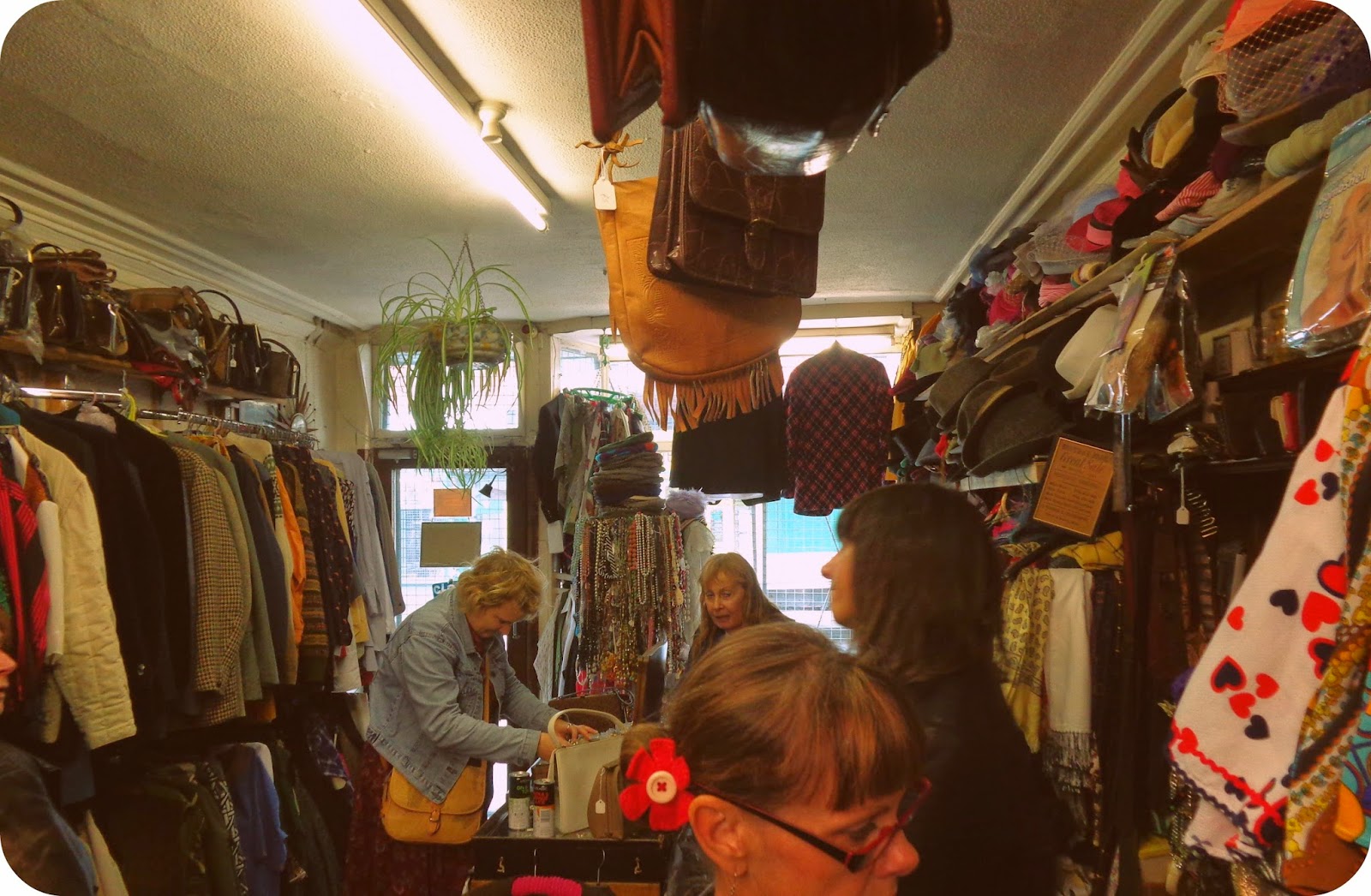 We cracked open the cans of vodka & orange and gin & tonic I'd bought from Asda on my walk into town. (I do like to offer my friends the full-on Walsall experience). No corner of the shop was left unexplored, rails were rummaged, cabinets ransacked and even the stepladders were brought out to get to the top shelf. 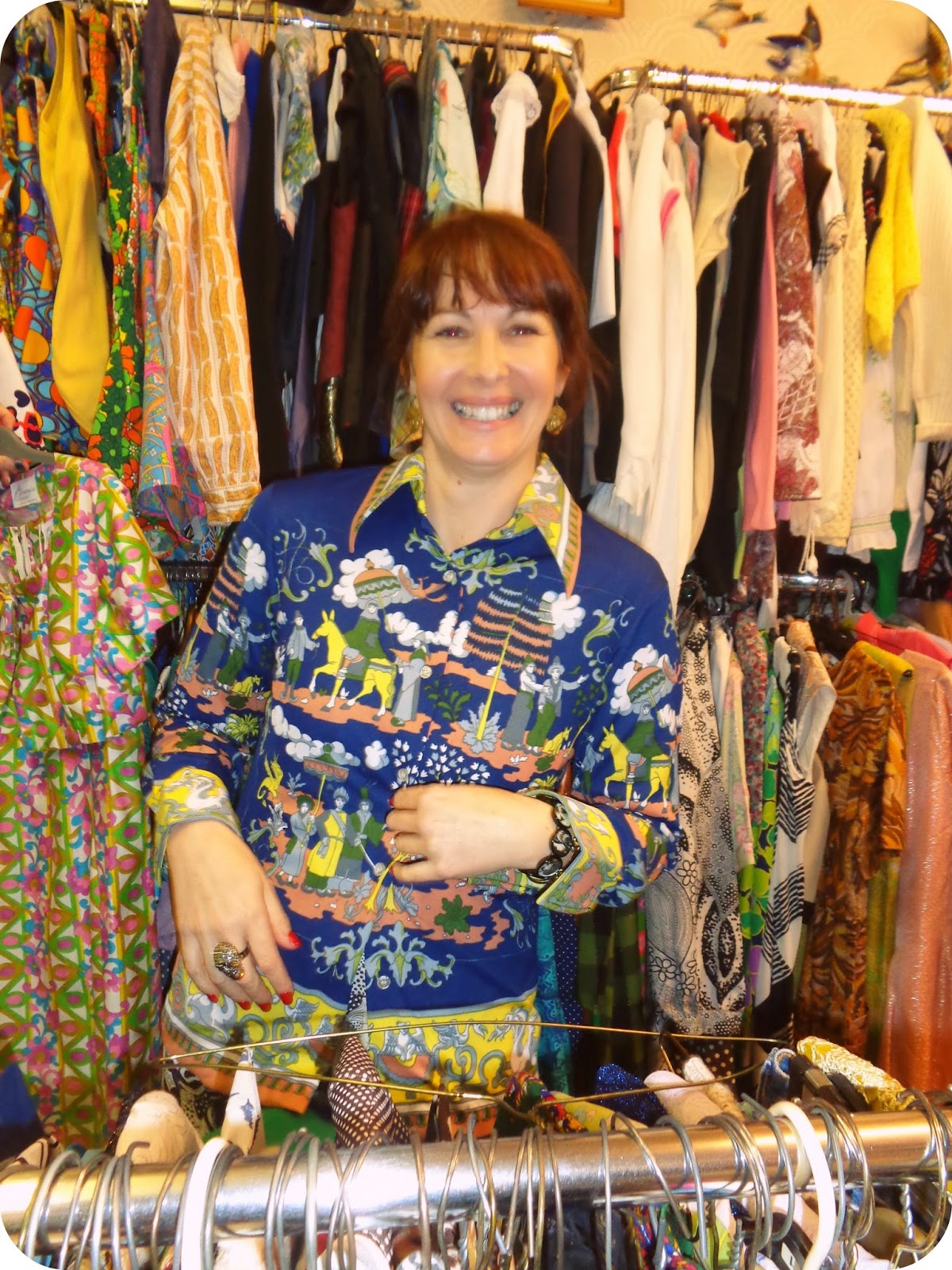 Once our knees were buckling under the weight of all the vintage swag we climbed the stairs, stripped off and tried all the glorious clobber on. How insane is the print on the shirt Em's got on? 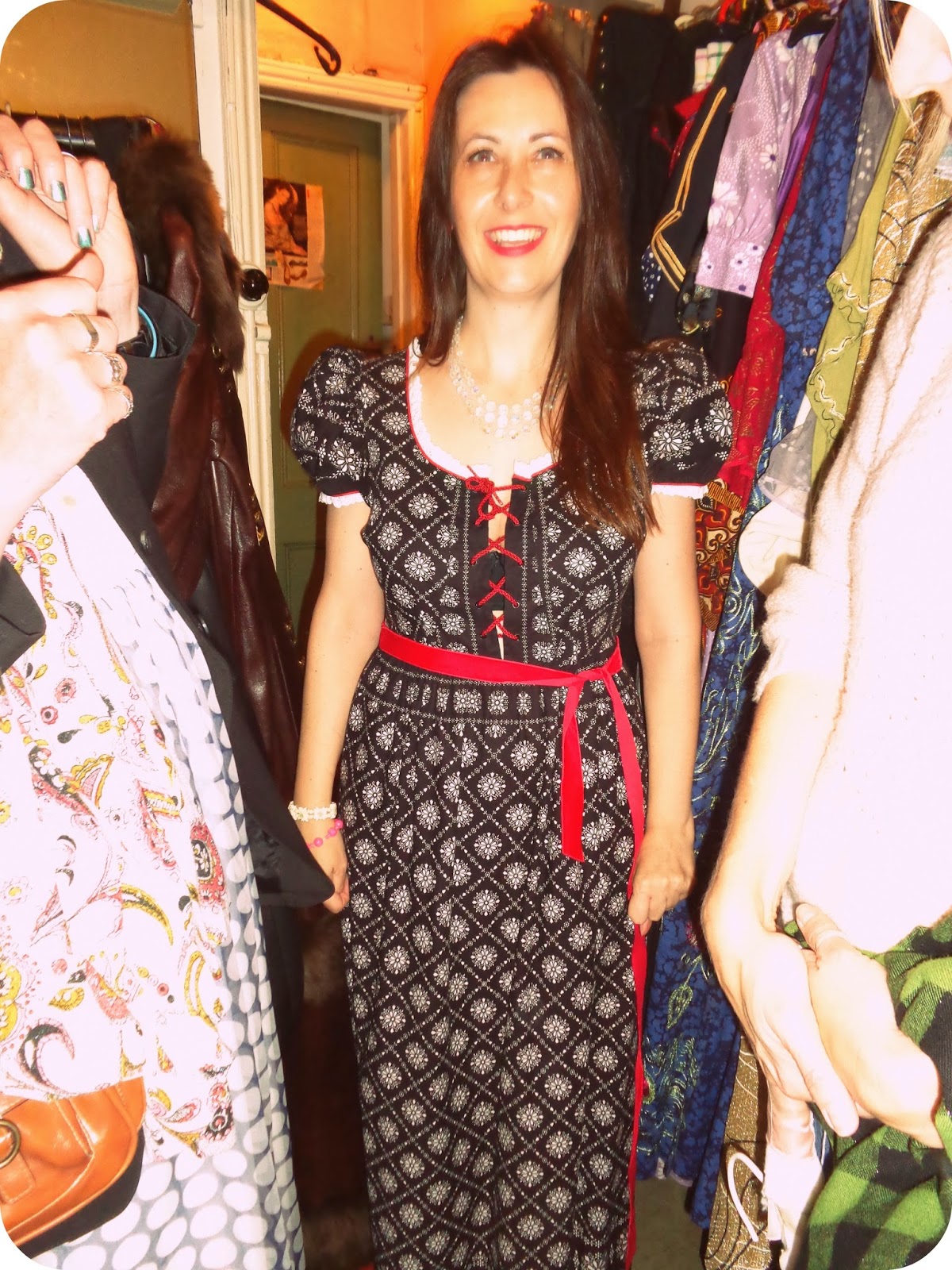 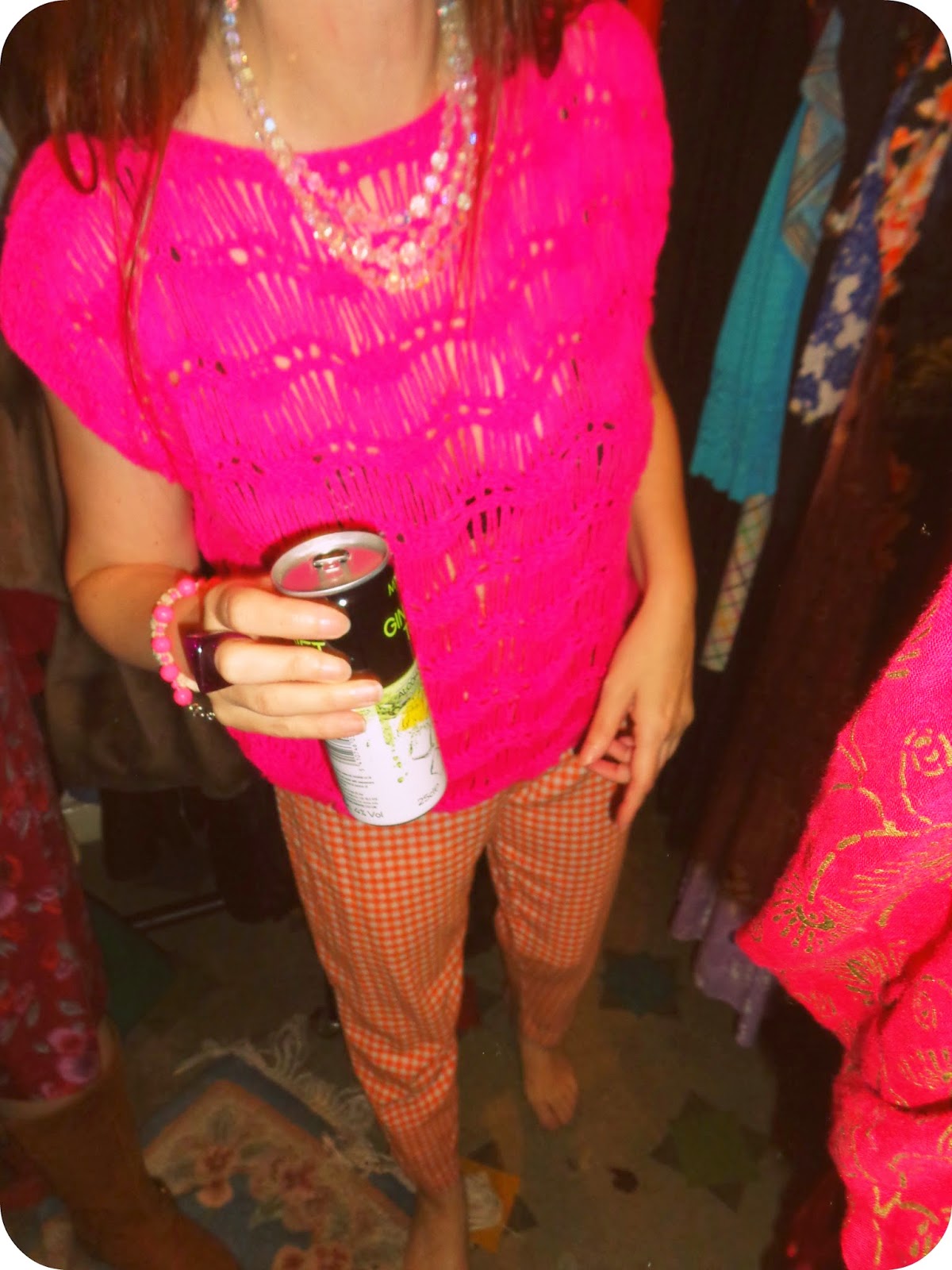 Bra out, can in hand, classy to the last. 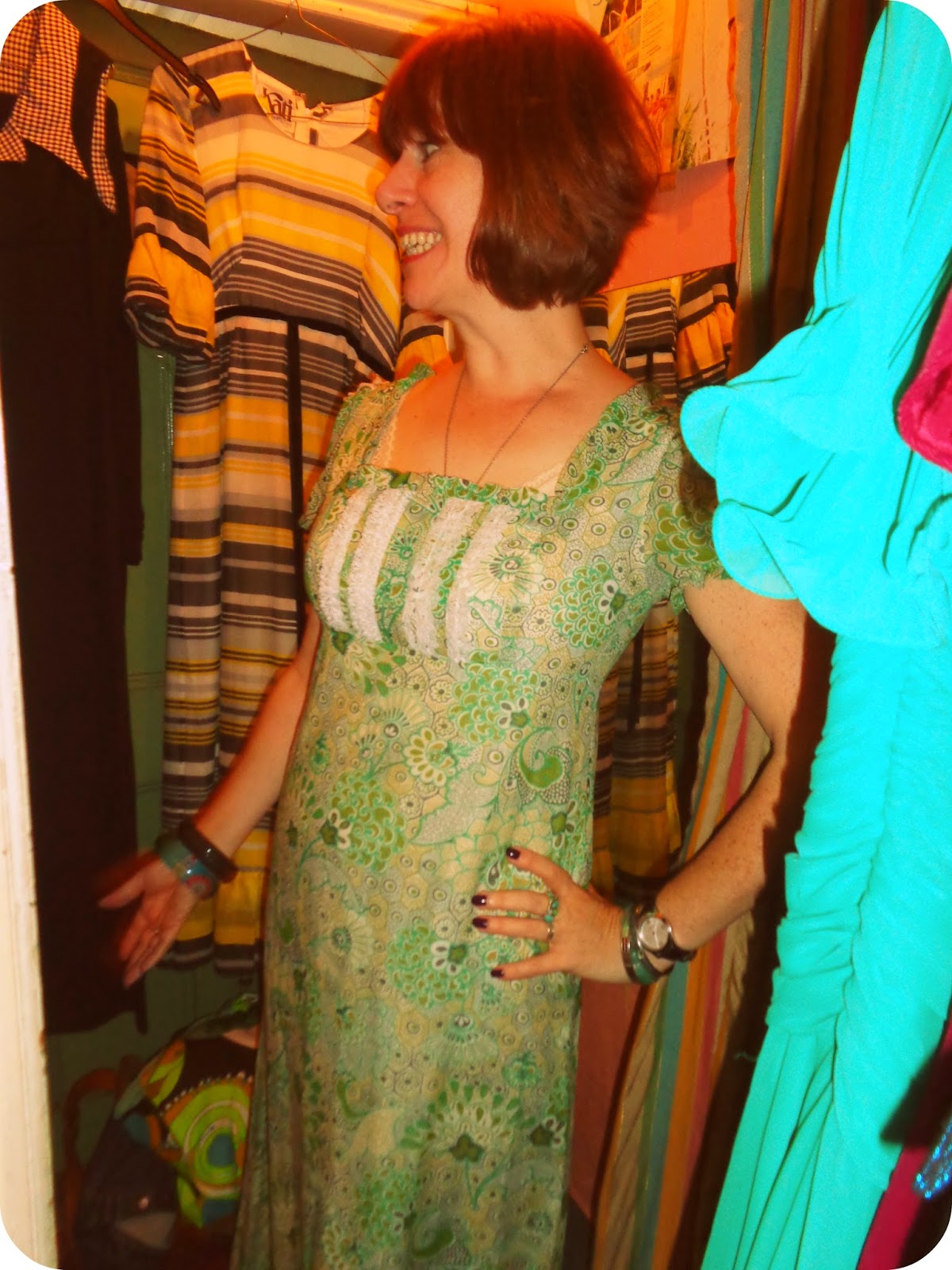 Is this dress a bit too Jane Austin? Curtise asked, to a resounding No, buy it, you daft bat from the rest of us. 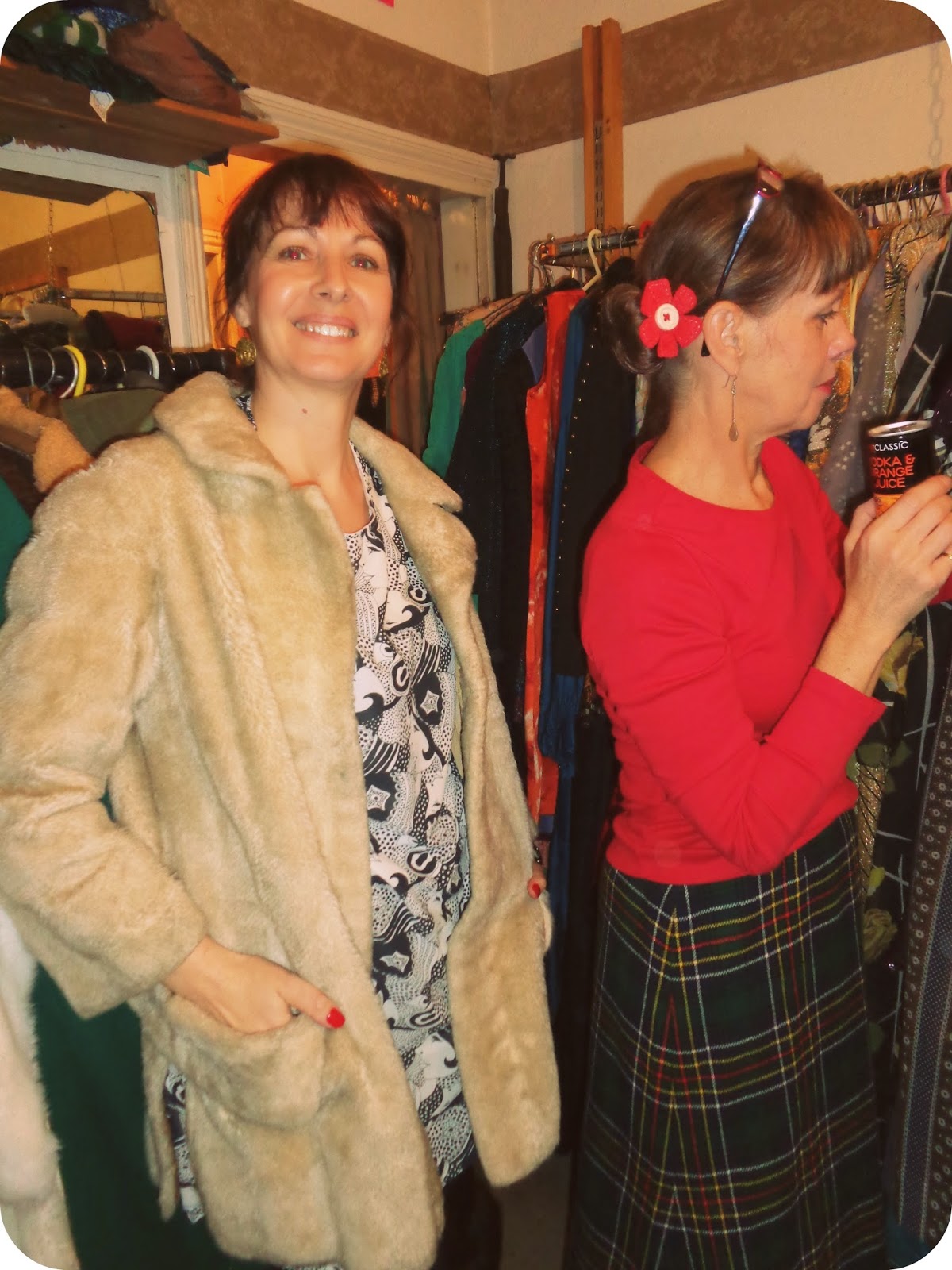 Em's Mum had just treated her to the amazing emerald green wool coat she wore to meet us so she couldn't justify buying this stunner of a 1960s faux fur. 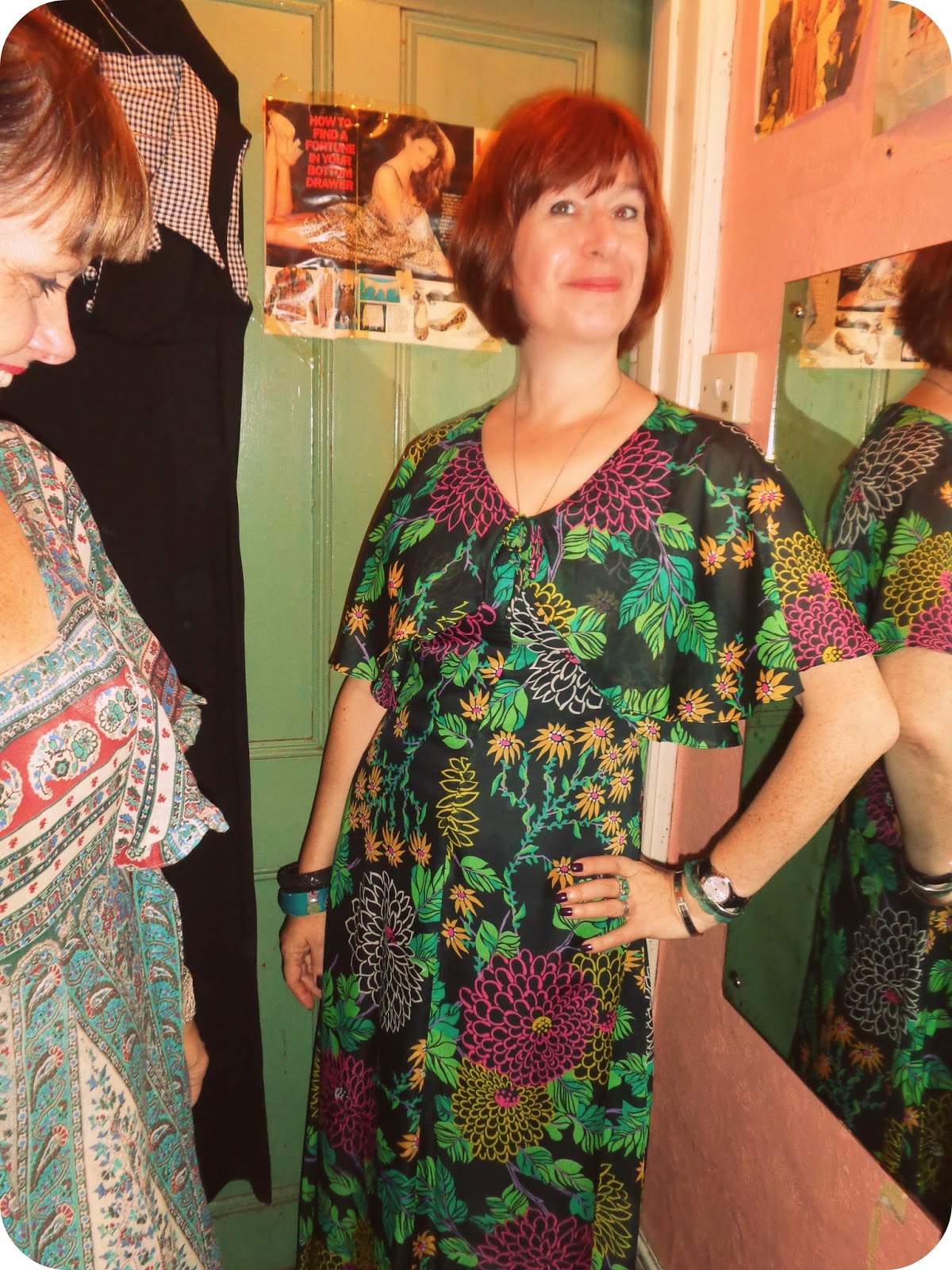 Fiona looked amazing in this block printed 1970s maxi as did Curtise in the chrysanthemum cape dress. Did they buy? You'll have to visit their blogs to find out!

Purchases made we said goodbye to June and her husband, Dave and headed off for lunch. Lyndsey had to run back to Second To None, in a heightened state of excitement she'd left her cape behind.

Fascinating fact: This early 19th Century pub is actually called The Prince Belucher, named after the Prussian general who fought alongside Wellington at the Battle of Waterloo. I've no idea where the "Belucher" bit of the sign went.

We had lunch in posh Wetherspoons (Walsall has two within a few yards of one another). St Matthew's Hall was built 300 years ago and was originally the site of town's first library. 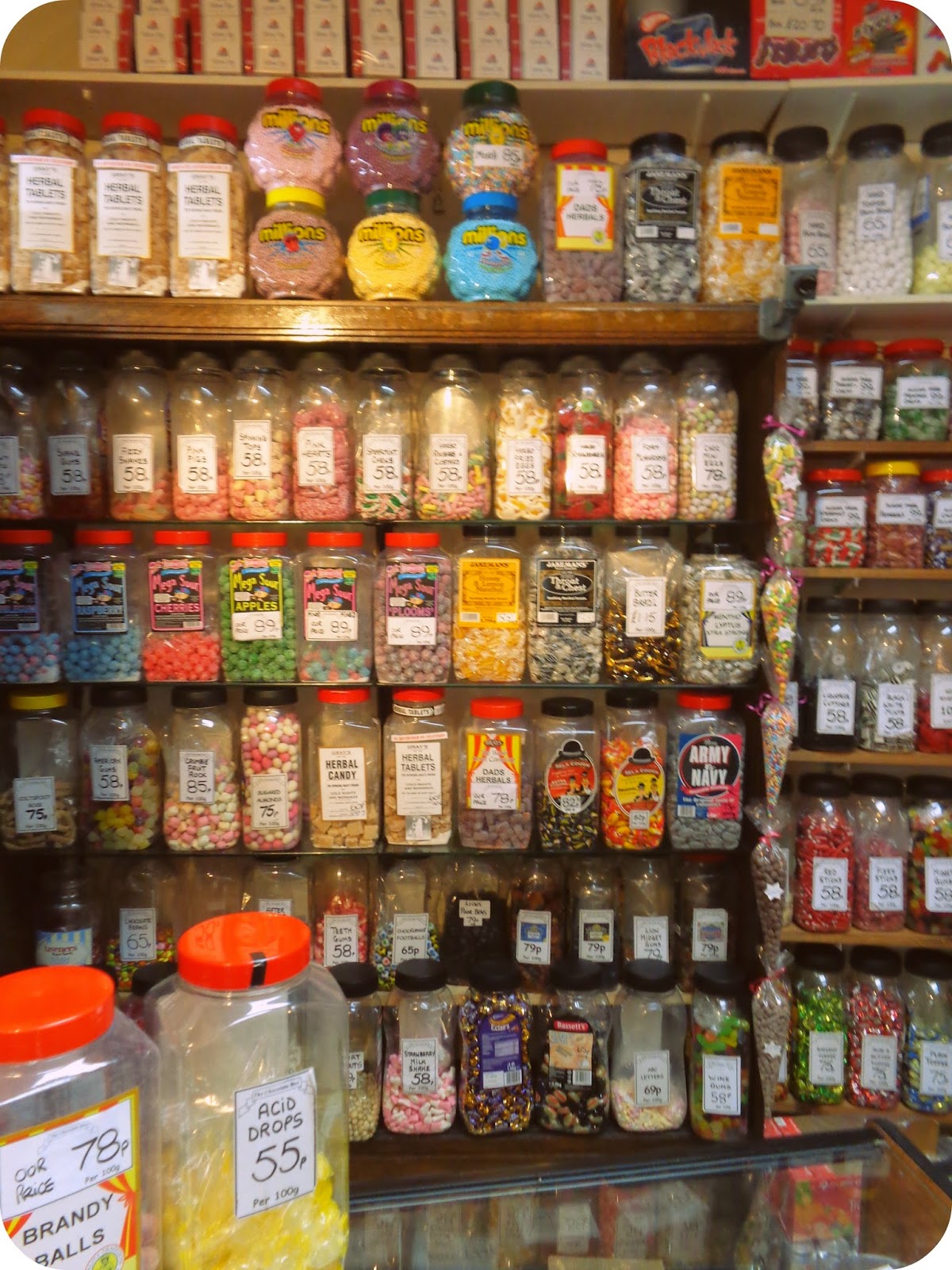 I took the gang to admire the array of goodies in The Chocolate Box, hilariously a sweet shop with a dental surgery upstairs. Its been in business for over 70 years and stocks proper old fashioned confectionery like Teddy Gray's Herbal Tablets, the pride of the Black Country. 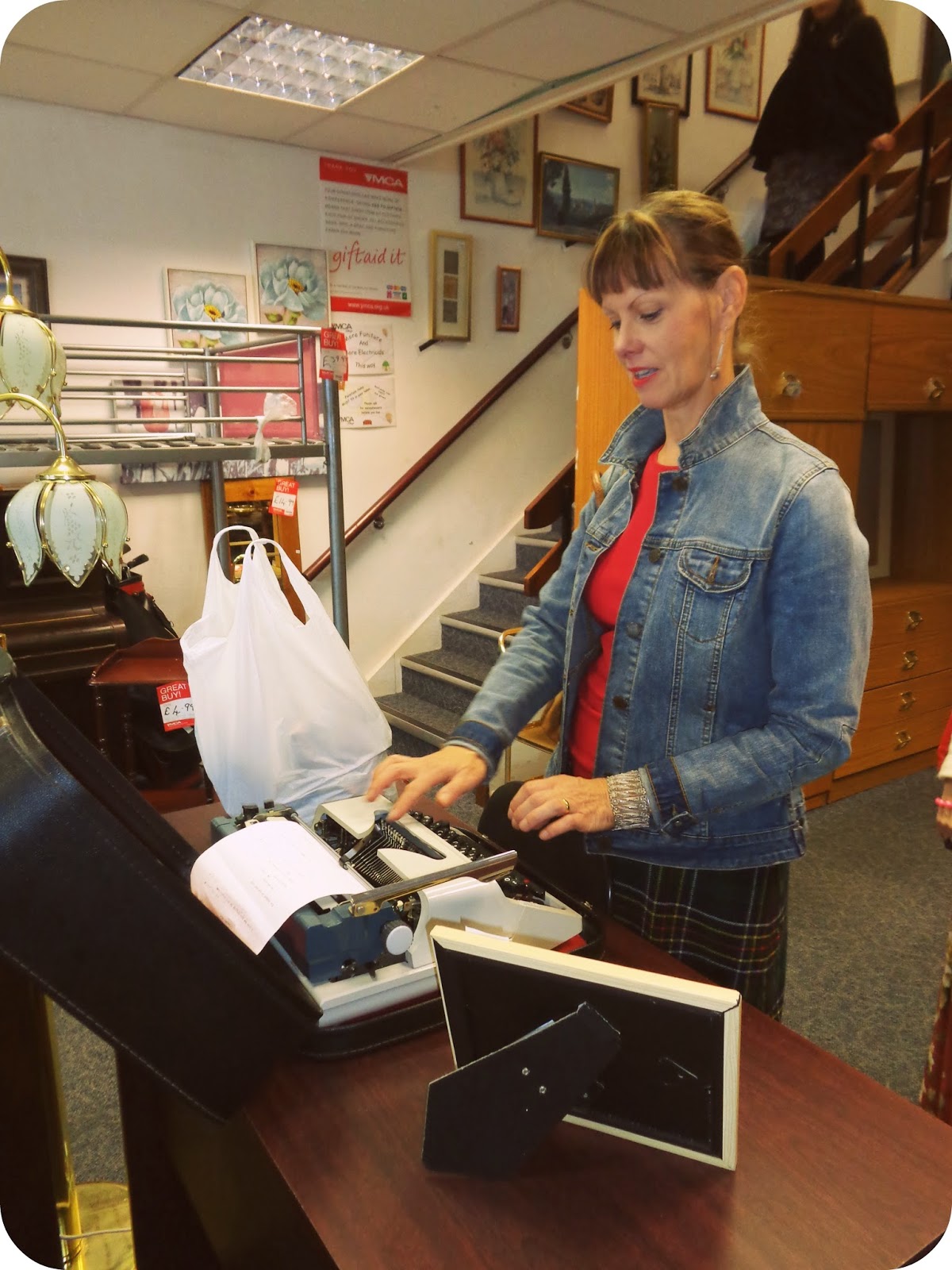 We then went for a whistle stop rummage of the chazzas. Fiona relived her college years playing with this vintage typewriter in the YMCA. 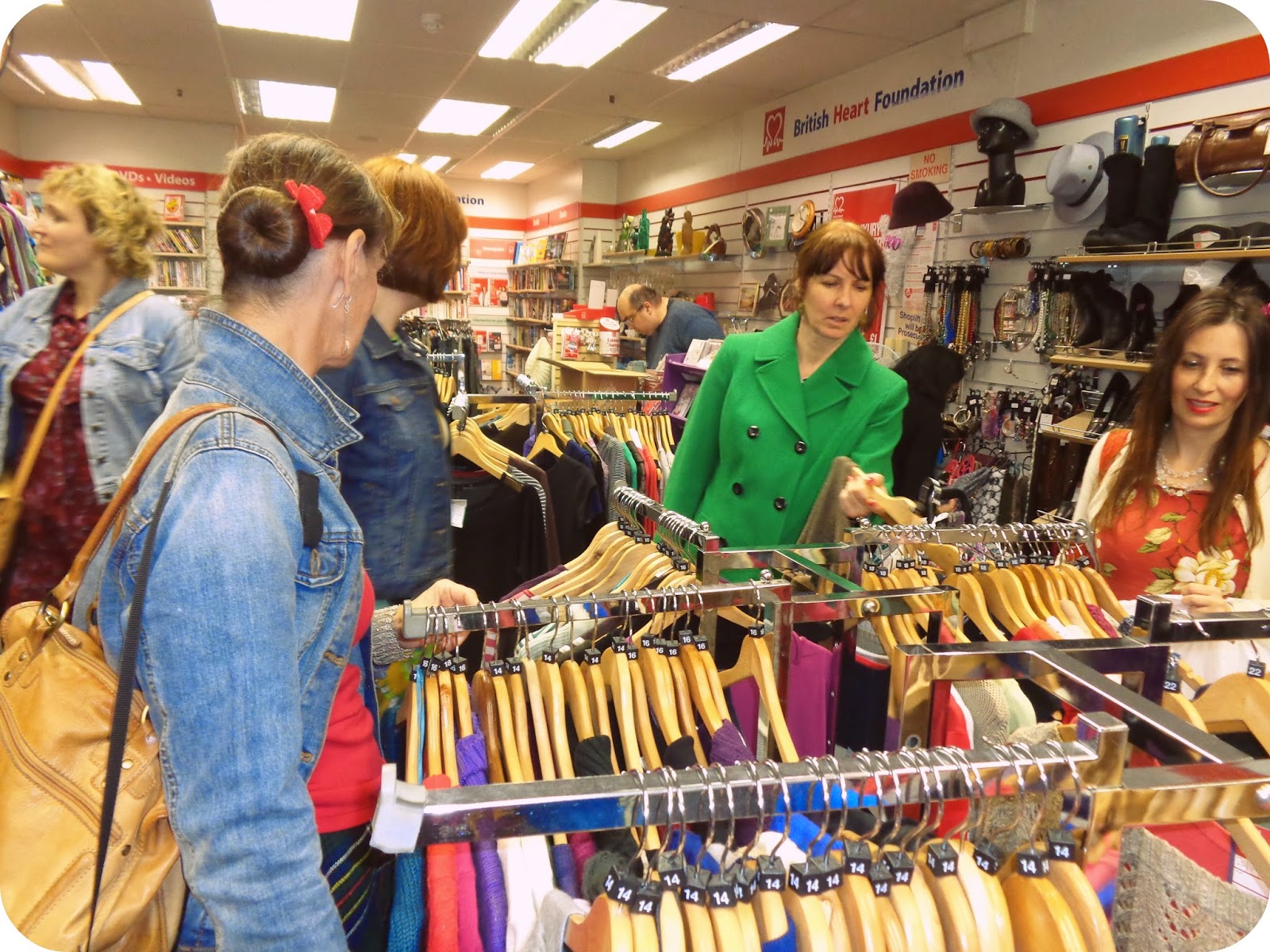 The rails in the British Heart Foundation got a battering. 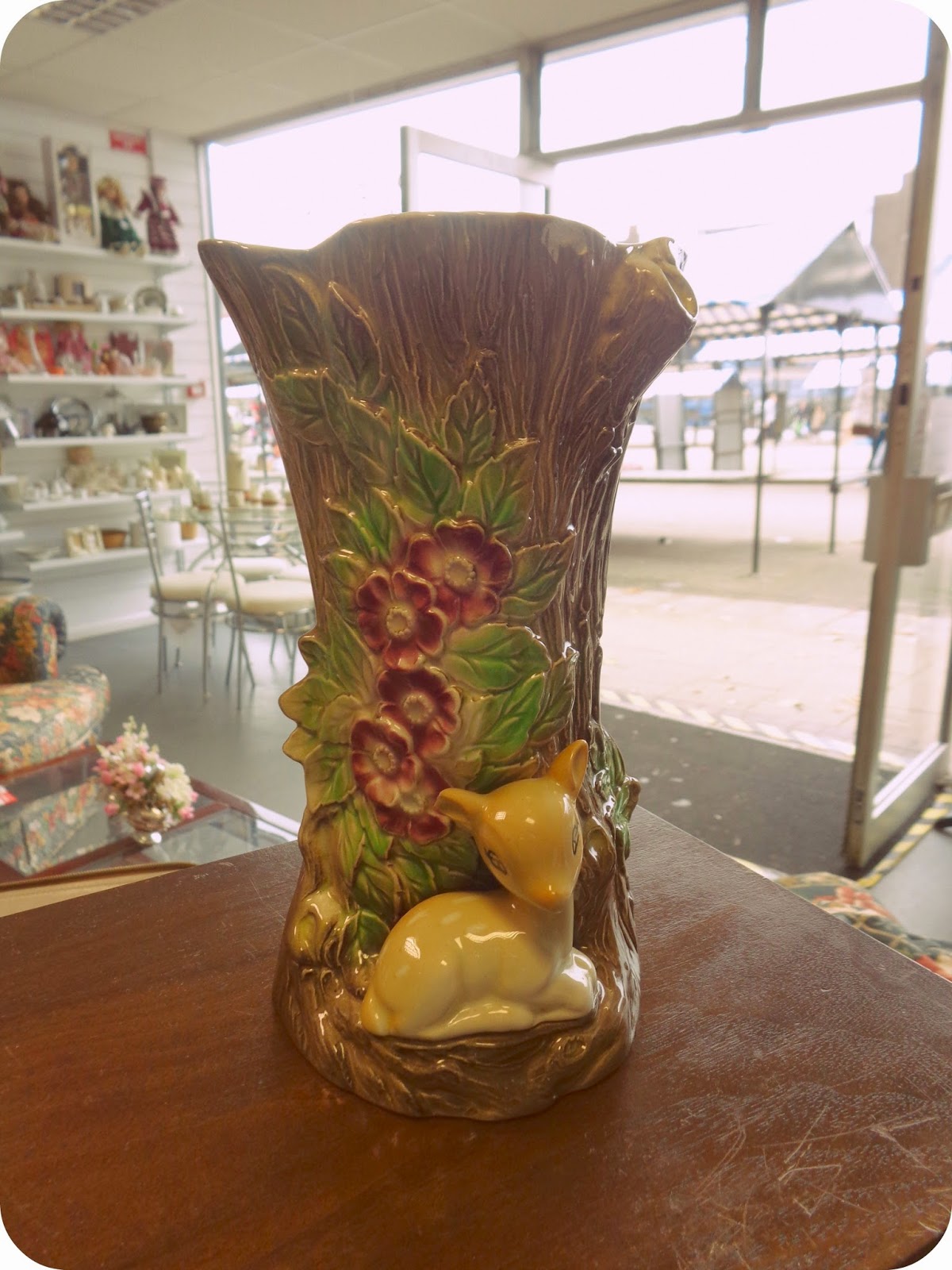 Call ourselves vintage bloggers? Only £1.99 and still nobody wanted this OBD*. 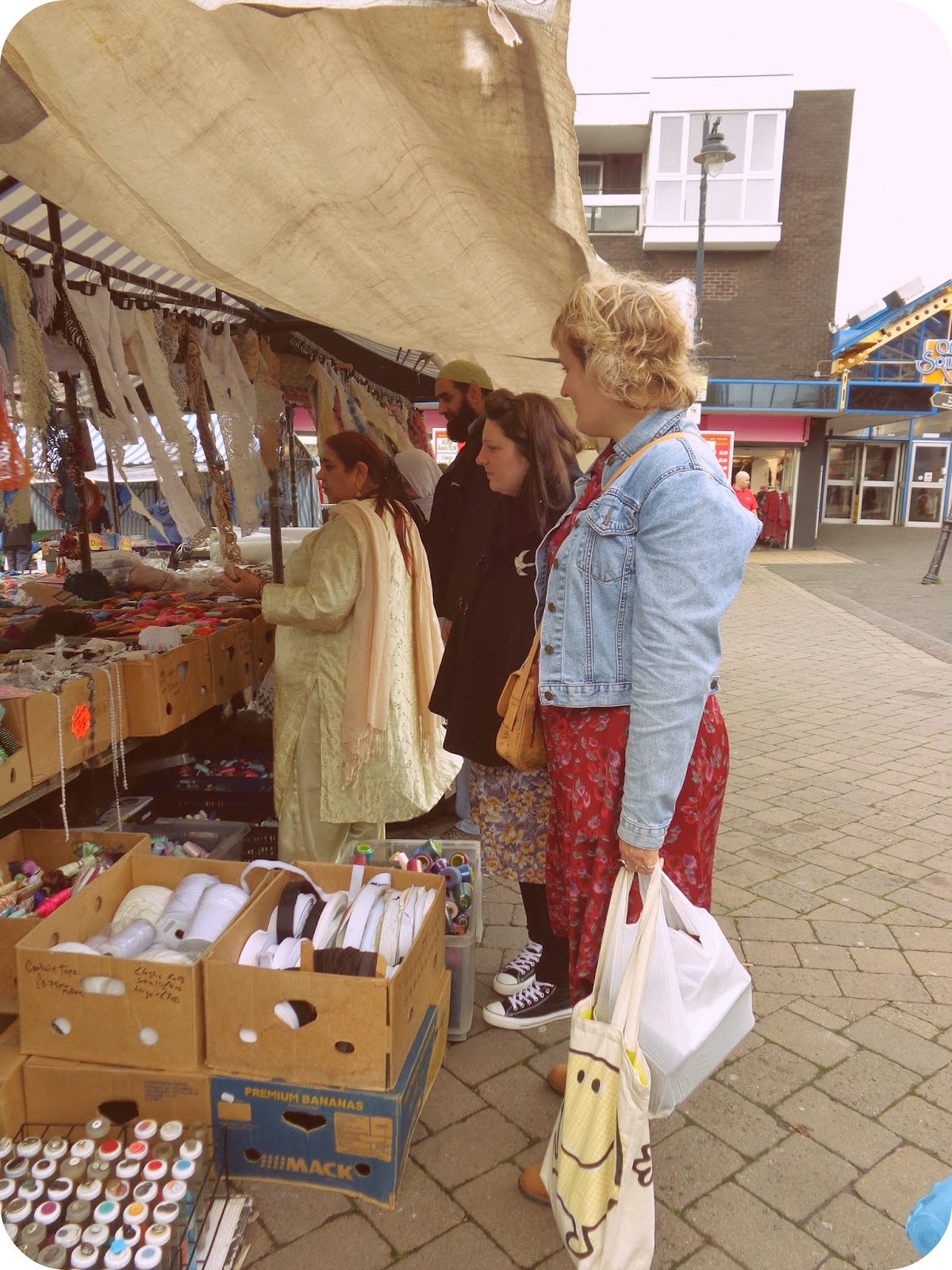 We visited the Asian trimmings stall where we all cooed and sighed over elephant braiding, lurex pom-poms, velvet buttons and sequined paisley appliqués. 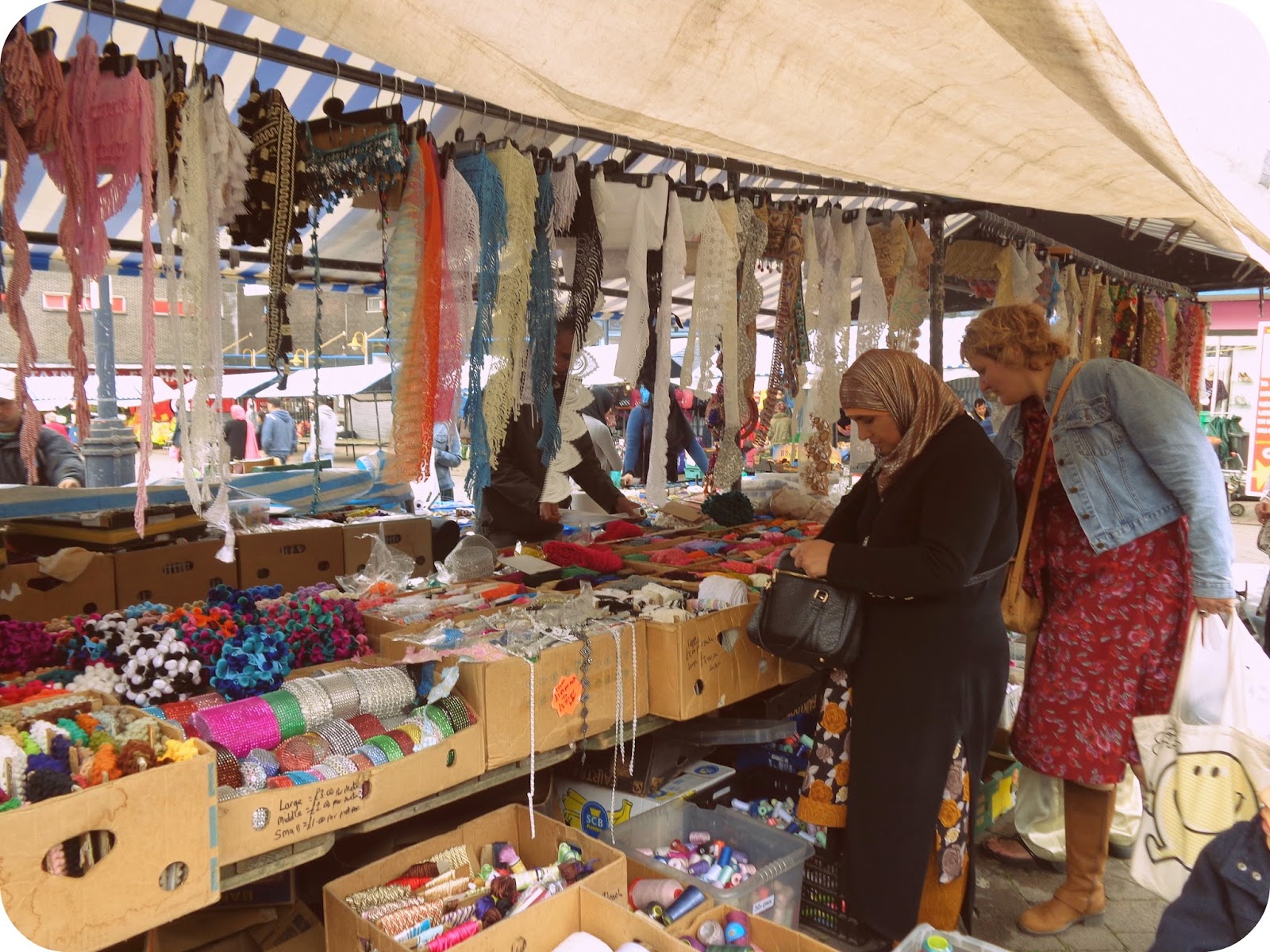 Once the girls discovered how cheap everything was they were almost rendered speechless. 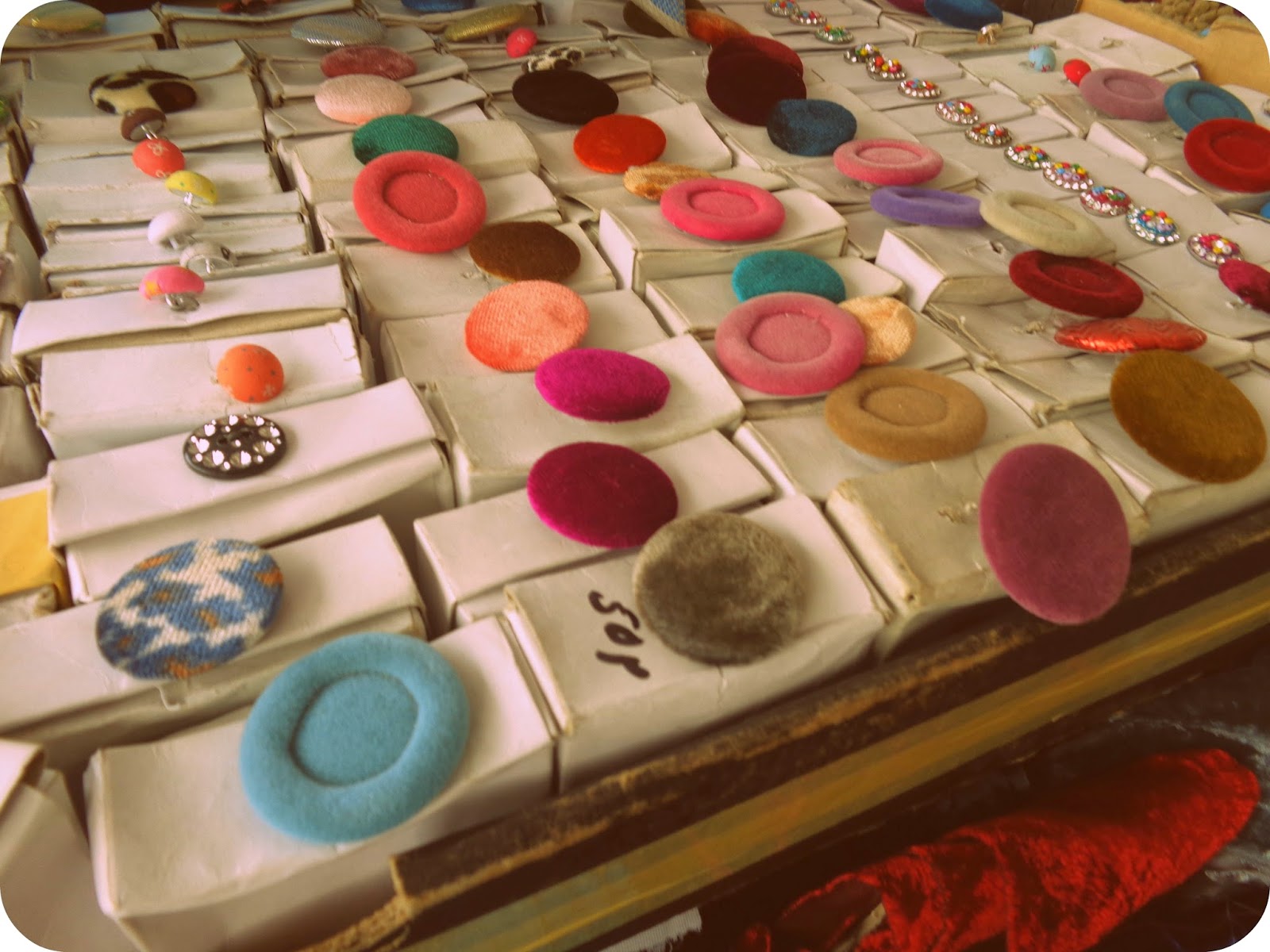 We waved Lyndsey & Vanessa off then headed to rough Wetherspoons (despite being a former Art Deco cinema its the less salubrious of the two) for a swift farewell drink before the rest of the gang caught their homeward bound trains.

What did I buy? This child's fitting 1960s suede waistcoat.
There's also a psychedelic 1960s bikini to show you but its currently drying alongside the killer swimsuit I got from Thursday's jumble sale. 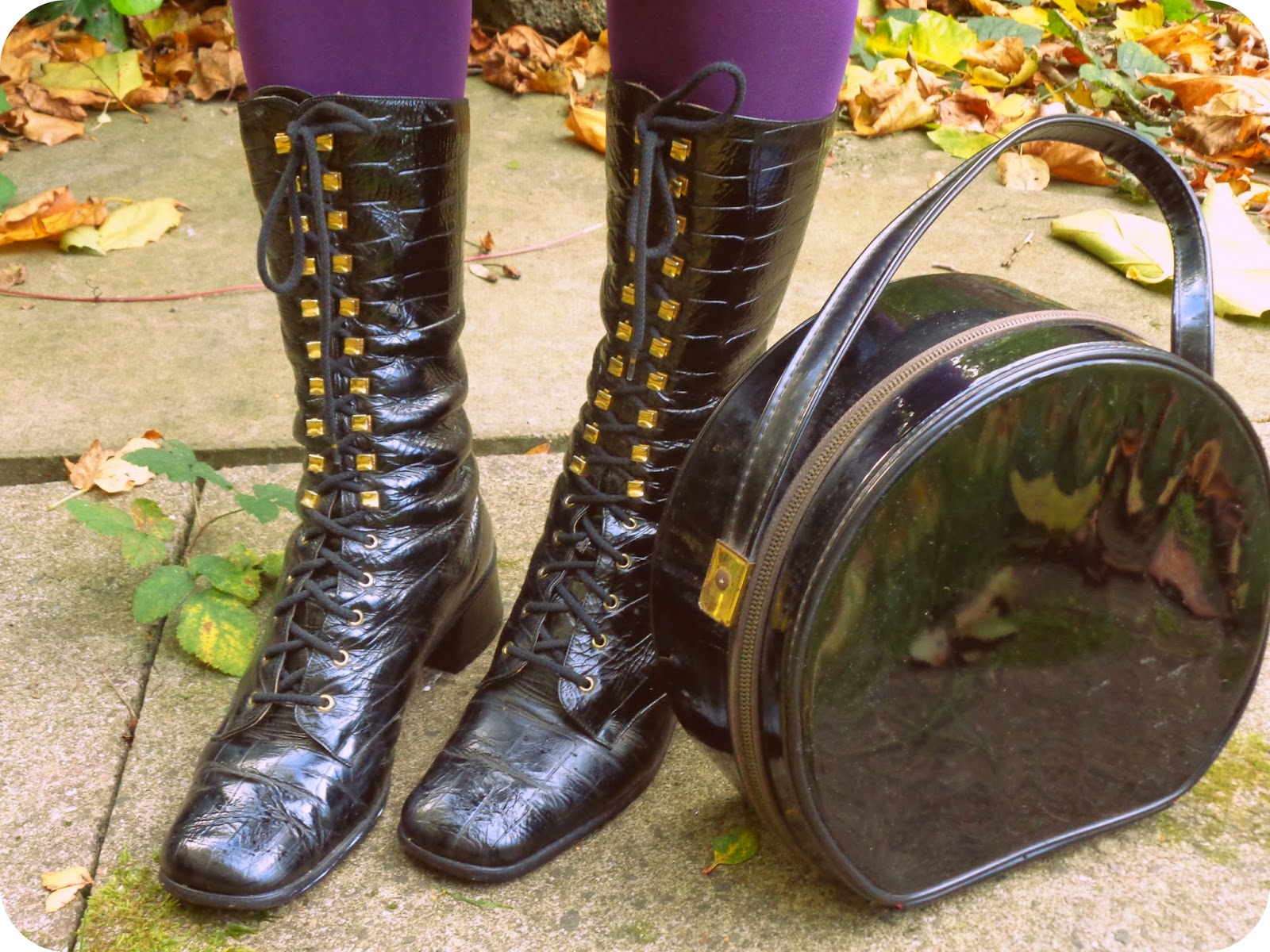 As they got so much love last week I thought I'd give you another flash of my inherited 1960s boots. Go-Go well (ha!) with the patent vanity case I got from Friday's jumble sale for 20p, don't they?

I'm linking to Patti & the gang for Visible Monday. 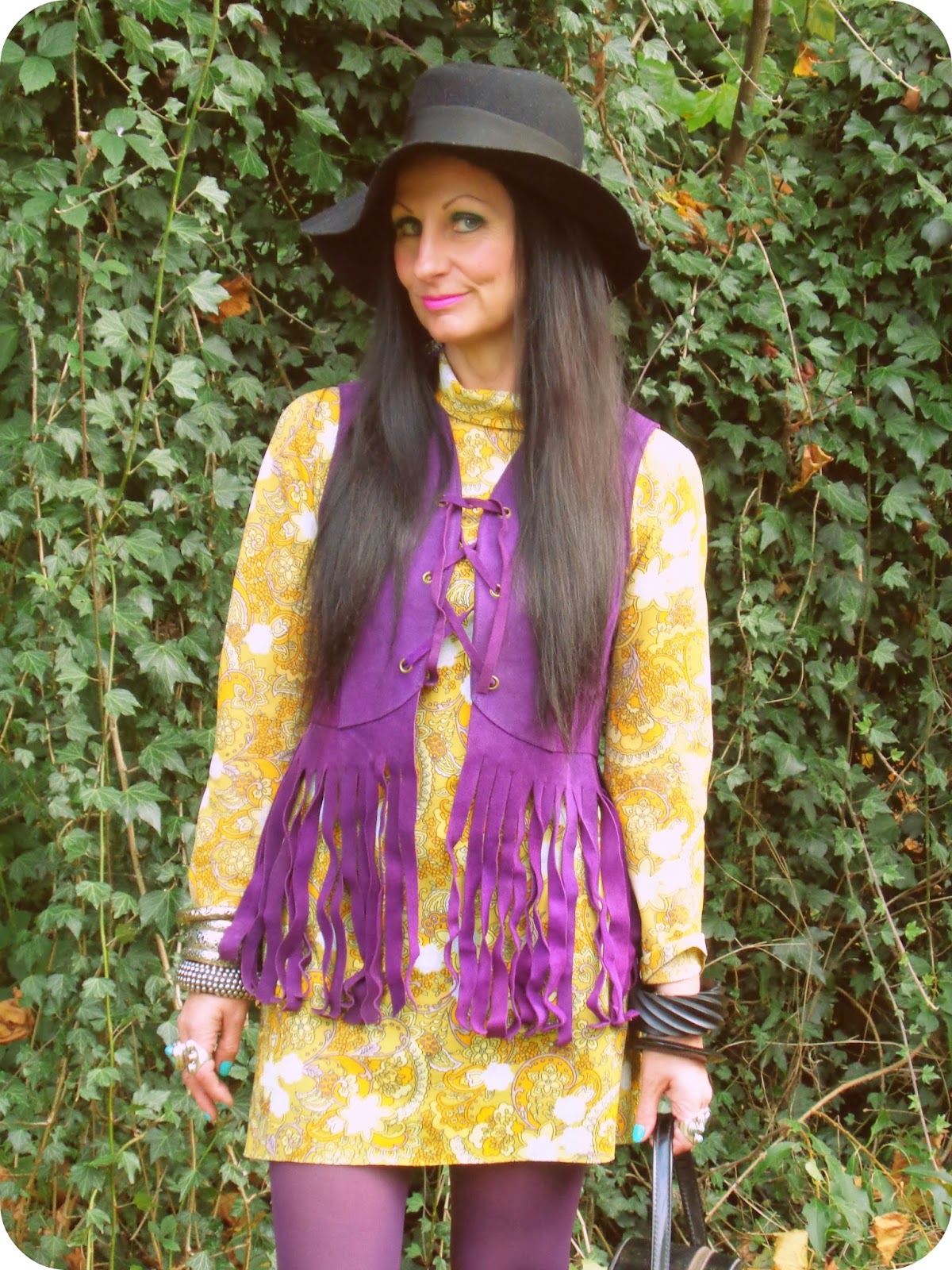 What a fab day off. Amazing vintage clothes, copious booze and the best company. I can't wait till the next time.