Being As You Asked So Nicely.... 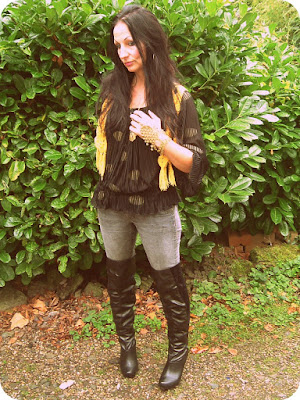 ...I thought I'd show you the thigh boots I picked up at Thursday's car boot sale. Just the thing to add a bit of interest to my ancient skinny jeans I've had to dig out of the depths of beyond as I'm helping a friend move house and whafting around in a vintage maxi dress isn't really an option. 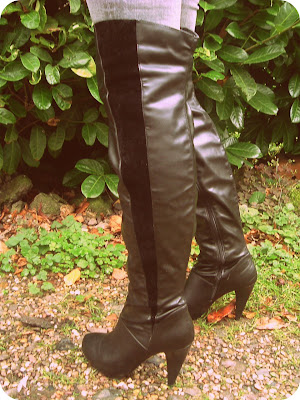 I'm actually the proud owner of three pairs of jeans, all bought for under £2. I do rather like jeans but lets face it, life's far too short to waste it wearing practical clothing. 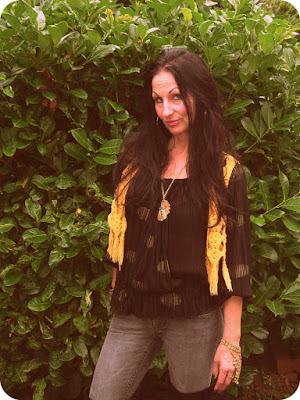 I've added a 1970's Courtaulds' knife pleat blouse I found in a town centre charity shop last week along with a fabulous vintage crochet waistcoat sent all the way from New Zealand by my darling Helga. 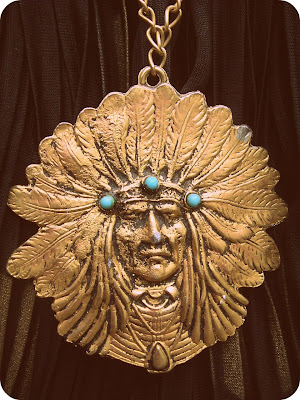 This rather insane pendant was from a car boot sale a couple of weeks ago, even the lady selling it laughed when I bought it. 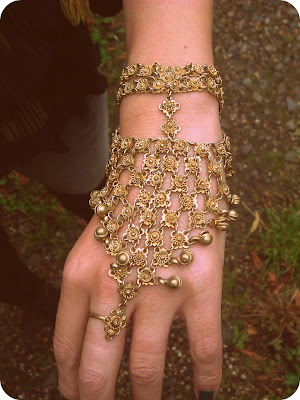 I bought this Indian ring bracelet from Oxfam when I was 12. Charity shops were my stores of choice even as a child. 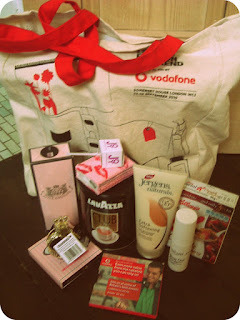 This is my LFW goodie bag along with some of the contents - prettily packaged panty pads and tissues, a Sharpie Pen, Lavazza coffee, Label M hair product, Jergens moisturiser, a Joy lollipop, posh raspberry liquer (I had two as Jem's teetotal and very generous), Special K Strawberry & Chocolate cereal (there were three of these but Jon's demolished two of them), a Vodofone simcard, a Galaxy Ripple (which I ate on the train home) and a 30ml Juicy Couture Travel Eau de Toilette (which caused much hilarity with my friends who kept asking where my velour tracksuit was).
I've been tagged and given awards by some lovely bloggers. I really appreciate this and shall be passing on your kindness later in the week.