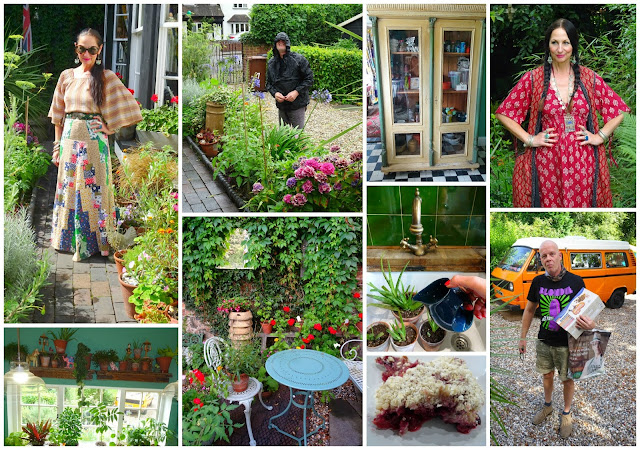 On Friday (day 154) I was up just after 6am so I could book next week's National Trust adventure. I fed the lads who, due to Storm Ellen's 50 mph gale force winds, had little interest in going outside and then did my final Wii Fit workout of the week. After our fruit & yogurt breakfast I prepared yesterday's foraged damsons and windfall apples & made a crumble for a rare weekend treat. I make my crumble vegan-friendly by using olive oil rather than butter, adding it gradually to plain flour and stirring it with a slotted metal spoon until it resembles breadcrumbs then add unrefined sugar and oats. 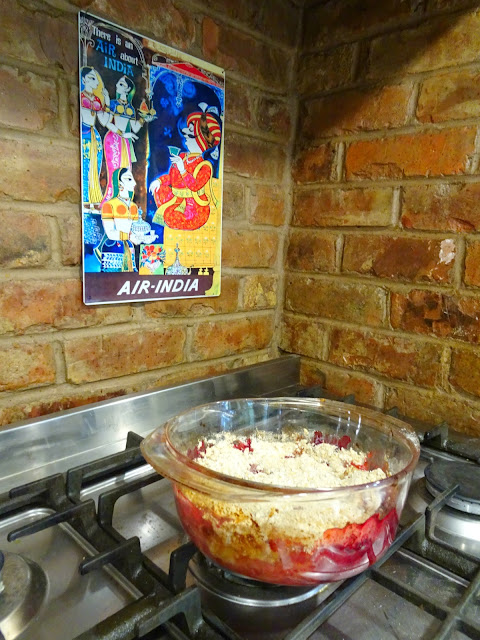 Thinking that it would be a perfect drying day, I did a load of washing and pegged it out on the line only to snatch it back moments later when the rain started and instead hung it on the airer in the utility room. 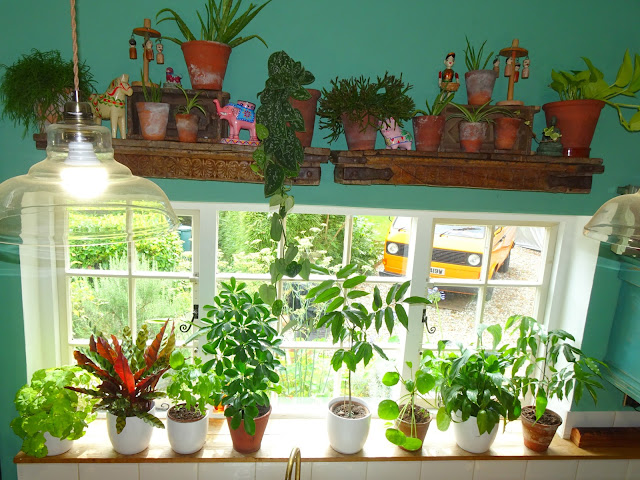 I repotted three houseplants that had grown too big for their pots and took the Aloe Veras down from the shelf above the kitchen window for their monthly watering. At the beginning of lockdown I feared my poor Aloe plant was dead but after dividing it and watering it sparingly with rain water (which I collect in pots scattered around the garden) both it and its babies, are doing wonderfully well. 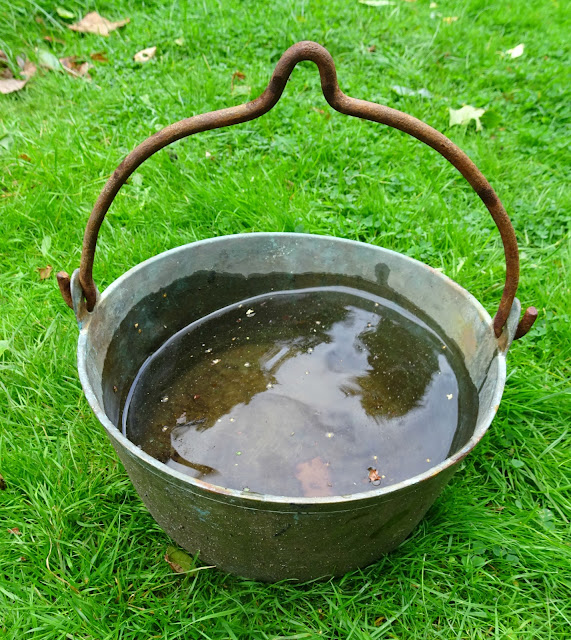 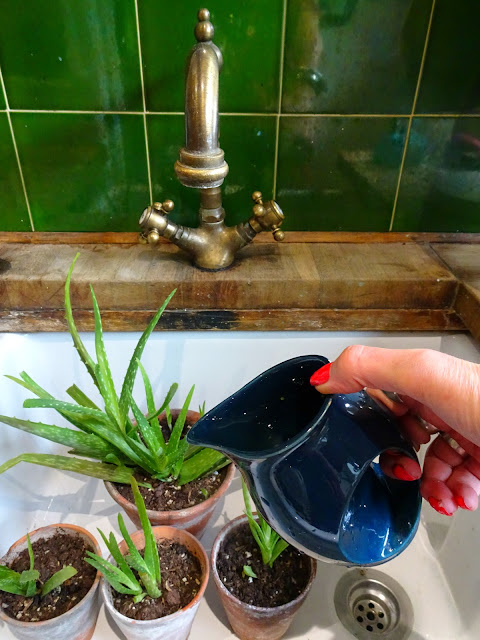 With a break in the rain I went outside, anchored the pots down with broken pavers (I knew there was a reason I'd kept them) and staked anything that looked vulnerable doing some deadheading and sweeping when I'd finished. 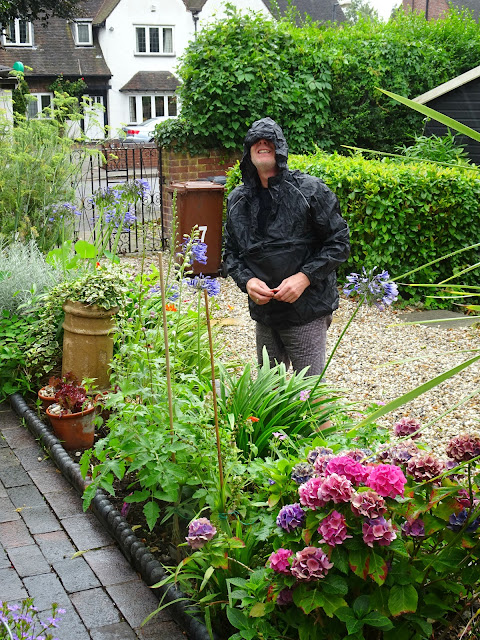 After our noodles the rain had returned but it didn't stop Jon experimenting with the irrigation system he'd built. 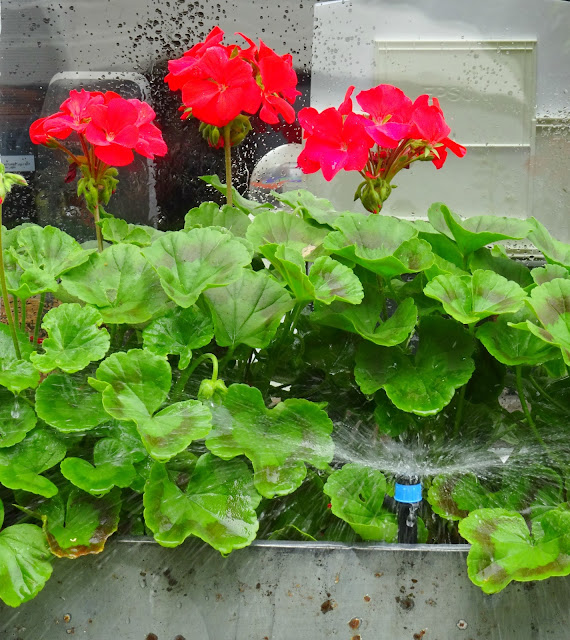 I left him to it and mopped the kitchen floor.

For the rest of the afternoon, I sat in the lounge & finished my book, The Mountain of Light. We had roasted vegetables with grilled haloumi for tea and some of the apple and damson crumble (with custard) later. After Gardener's World we watched a couple more episodes of The Lawyer accompanied by a few glasses of rum & cola. 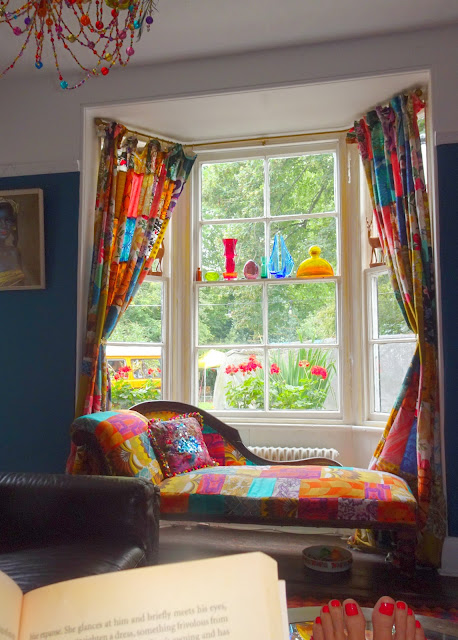 On Saturday (day 155) after I'd seen to the lads, I made mugs of tea and brought them back to bed where we read until 8.30am. 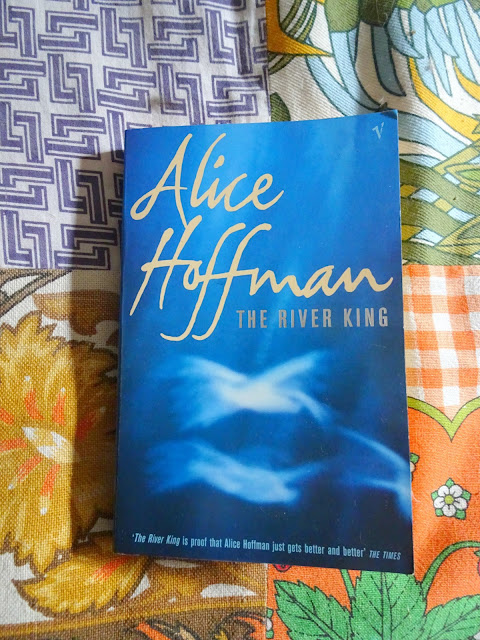 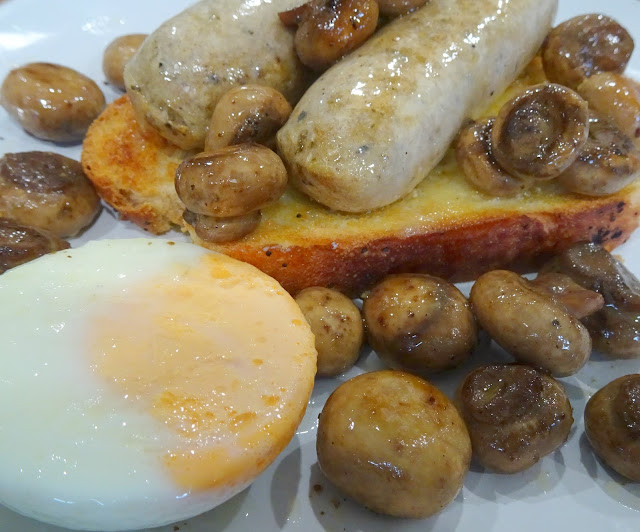 Jon tweaked the irrigation system and satisfied that the final skirting board, the awkward one behind the glazed kitchen cupboard on the bendiest wall, had finally stuck he painted it white to match the rest. Just the shelves and the last bit of tiling to go..... 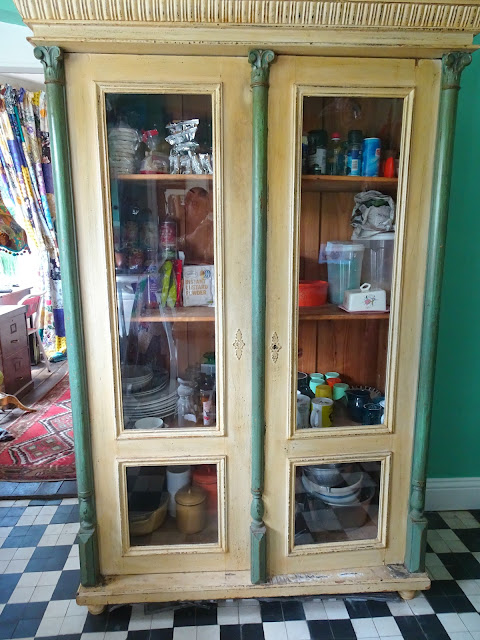 The Beeb were spot-on with their prediction for a mixture of weather, although yesterday's wind had died down to a less threatening 20 mph we were treated to both warm sunshine and torrential rain.
We own a tumble drier, made in the Black Country by Servis in 1982 (the company was established in 1929 but ran into financial difficulties in the Eighties and was sold). We inherited it from Jon's grandma in the early 1990s but rarely use it & even then, only for bedding, never clothes. I've had it on twice since lockdown started. Nothing beats line-dried washing. 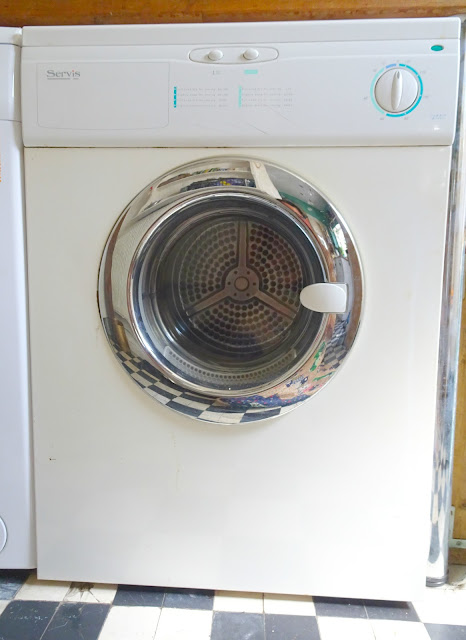 Between showers I raked up the debris from Storm Ellen (mostly helicopters from the neighbour's dreaded lime tree), weeded & swept the front outside the gates and topped up the bird food then, following Monty's advice from last night's Gardener's World, cut back the mint and the parsley. 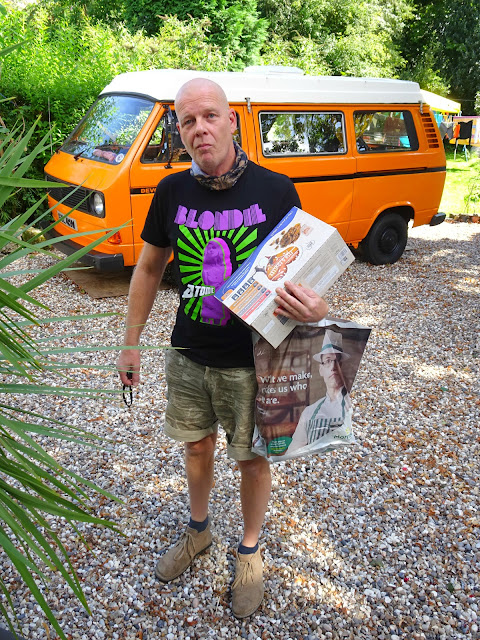 Jon popped out to the Co-op for cola as we'd run out. Amazingly he only bought what he went out for, the cat food had been in the van since the last time he'd been shopping. One time he went out for a pint of milk and came back with a Triumph Herald. 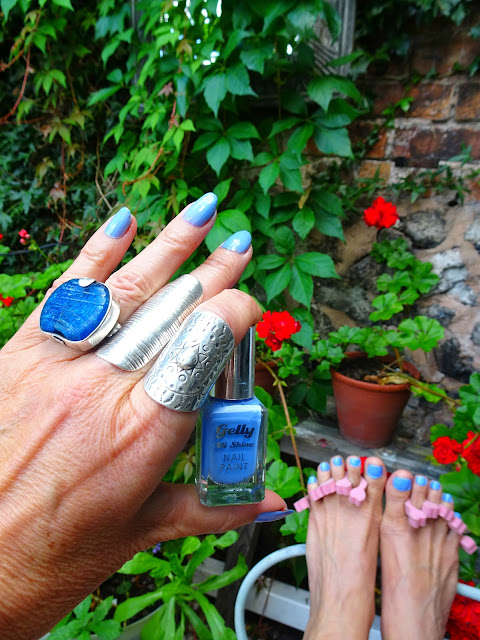 After a blog catch-up I painted my nails. Blueberry has been my regular festival colour for years, it's the first time I've used it this Summer. 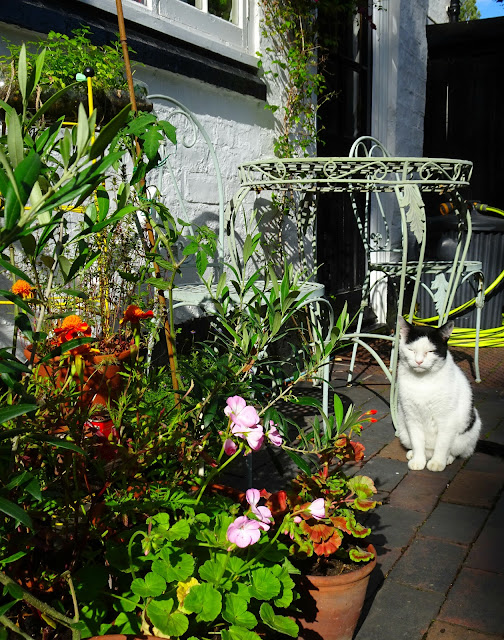 In normal times, after almost three months of us being on the road, the garden is looking as frazzled as we are, my pots are dried up & half dead and the borders overgrown and gone to seed. These days I can't stop popping outside, plonking myself on the bench (even in the rain) and marveling at how green and lush everything looks. 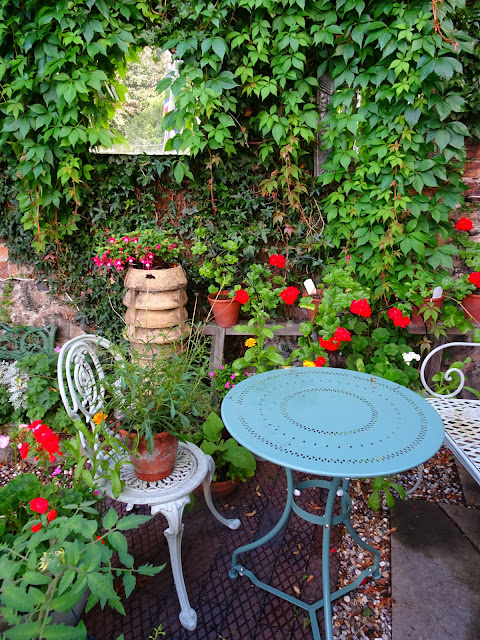 I love how the pansies, geraniums, marigolds and nasturtiums that I planted in the Spring are still blooming madly as are last year's Sweet Williams and Fuchsias. The Crocosmia and Montbrecia in the borders at the front of the house have stopped flowering but those further down the garden have just started. The delphinium & penstimon I cut back in June have grown back and blossomed again and, although most of the agapanthus have finished, this morning another two brilliant blue globes burst forth. 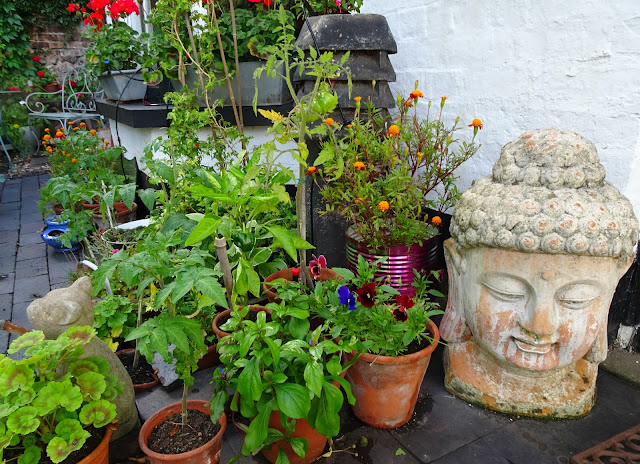 The fennel, little more than a bunch of dried up sticks a few months ago, are elegant and taller than me, their fronds slowly turning a delicate shade of bronze. In amongst the ornamental blooms I've squeezed in pots of tomatoes, peppers and aubergines and they're coming along a treat. 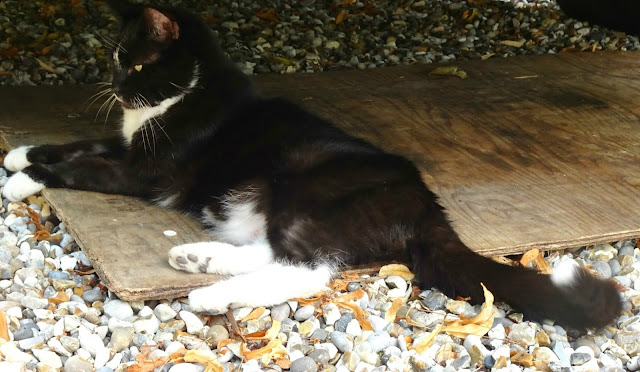 Tonight's tea was pizza with salad, leaving a bit of room for the rest of the crumble & custard later. We've got one episode left of Danish crime thriller The Lawyer and then what? Maybe re-watching the ultimate Scandi Noir, The Bridge or the riveting Line of Duty from the very beginning or maybe Morvern Callar or Apocalypse Now, films we've seen before but loved (hooray for the BBC i-player!) Whatever we chose I can guarantee that rum & cola will be involved.

Email ThisBlogThis!Share to TwitterShare to FacebookShare to Pinterest
Labels: Block Print, Books, Food, Gardening, It's All About Me, Jon, outfits